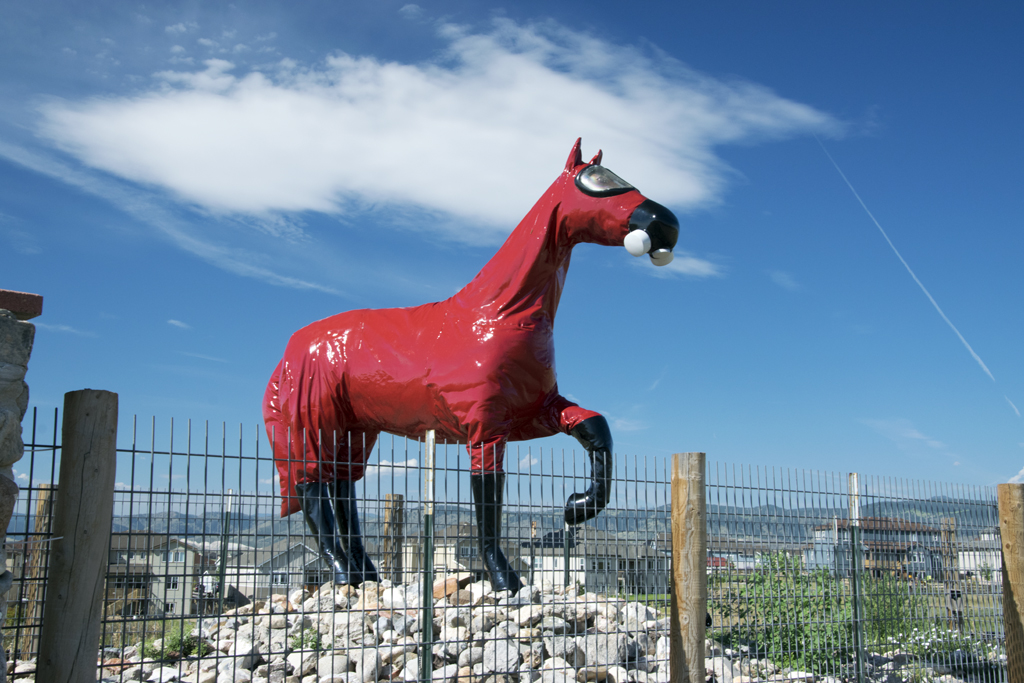 Once upon a time (1951) the US federal government (Atomic Energy Commission = today’s Department of Energy) decided to spend $45 million on a project that would exist on 6,500 acres between Denver, Colorado, to the southeast and the Rocky Mountains to the west. It provided jobs and many other benefits to the area. It seemed like a good idea at the time. The land was available and the jobs were welcome. However, they didn’t tell the public right away that it was a nuclear weapons plant.

This project/plant was known as the Rocky Flats National Munitions Plant and it thrived for years. But it wasn’t until 1957 that it became publicly known that the plant involved handling plutonium, a very dangerous radioactive element. Workers at the plant regularly handled plutonium to produce triggers for atomic bombs. Keep in mind that this time in history saw a ramp-up of nuclear weapons because of the Cold War.

Rocky Flats experienced some accidents and fires over the years. It has an involved and somewhat mysterious past full of conspiracy theories, including two fires in 1957 and another major fire in 1969. Also, the location had been determined using wind-direction data from Denver’s former Stapleton Airport, which was east of the city. Rocky Flats is west of the city, and the wind actually blows directly toward downtown. The public wasn’t informed of all this right away, and much of the information has been kept secret to this day.

In 1975, local landowners sued the federal government because of contamination issues outside the Rocky Flats area, and there were protests, whistleblowers, lawsuits and all sorts of goings-on. You can read far more details in Westword magazine, which has an excellent article online.

The FBI actually raided Rocky Flats in 1989. It was the first time a federal agency raided another federal agency. In the end, Rockwell International, who operated the place at the time, was fined $18.5 million and given guarantees that no one would be charged in the future. This amount was almost $4 million less than the bonuses the feds had paid Rockwell to operate Rocky Flats in the first place. This was only the tip of the iceberg. Dangerous radioactive waste was stored in exposed areas in rusted barrels that had begun to leak, among other things. In fact, much of the protests about nuclear waste storage and cleanup in the 1970s and 80s was due to the shoddy practices at Rocky Flats that had come to light during those decades.

The cleanup, originally estimated to cost almost $40 billion and take decades, began in 1996, with most of the plant’s employees retained to do the job. Low-level waste was shipped to other sites, and the most dangerous materials were sealed below ground in a giant concrete well in the middle 1,308 acres of the site. It’s supposed to be restricted from access forever. Then, after only $7.7 billion and less than ten years, the cleanup was declared complete and the site was cordoned off as a nature preserve. It’s been under the auspices of the US Fish and Wildlife Service since 2007.

A grand jury had been impaneled after the raid in 1989, and their conclusions led to the legal settlement and cleanup project. However, efforts are still ongoing to unseal the conclusions of the grand jury. Now, no one seems able to locate the more than 60 boxes of records the grand jury left behind, which are supposed to be in federal custody. Hmmm.

What’s very scary to me is that, in 2018, the area was opened to the public as the Rocky Flats Wildlife Refuge. FYI, the half-life of plutonium is somewhere along the order of 24,000 years, which means that in 24,000 years, only half of the radioactivity will have decayed. And people can go and hike there now! Second, housing is encroaching on the area due to Denver’s population boom, putting financial pressure on the government to open it up to development. In fact, several new developments have been built in the past five years or so just outside the perimeter, and downwind, of Rocky Flats. Third, Denver has a sort of beltway highway around the city, as do most major cities, but it’s incomplete because of the restrictions on the Rocky Flats area. Lately, a proposed highway segment through the area has precipitated some soil testing, which has come back “inconclusive”, so they won’t move forward with the highway at this time. I think. I hope.

Wow. But you had to know the history for this week’s post to make sense. I give you the Cold War Horse, which some call the horse in a hazmat suit! 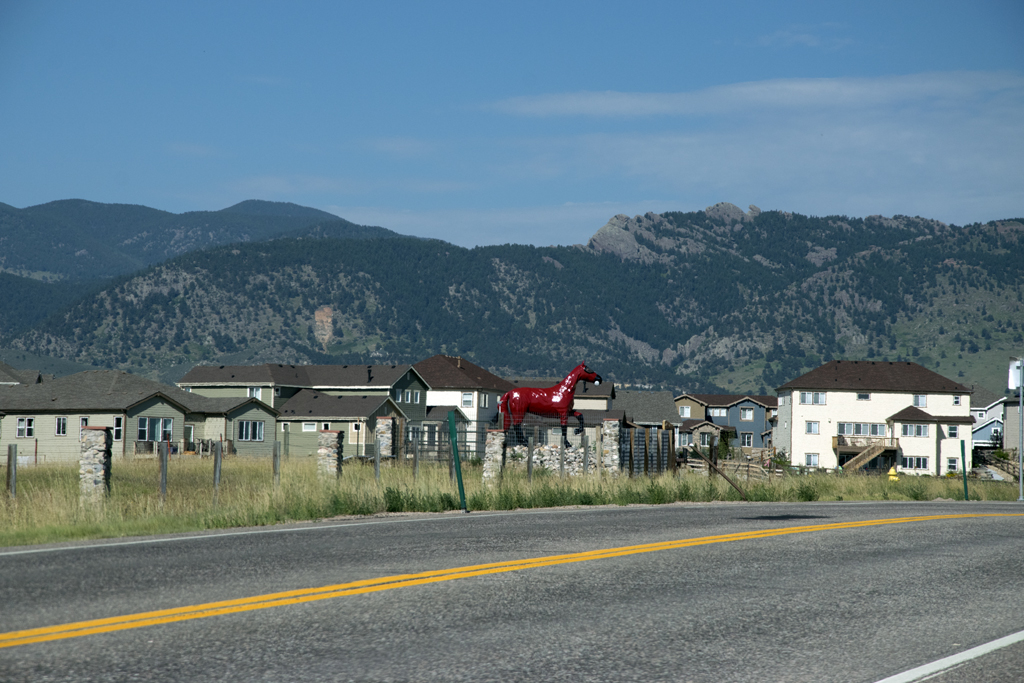 The horse has its own website, too. The statue was created by Jeff Gipe, an artist whose father worked at the Rocky Flats plant. He grew up, as his website says, “downwind” of the plant. The sculpture stands long Highway 72, just south of the Rocky Flats perimeter. You can see a subdivision just beyond the sculpture in the above photo, to the south of the statue. After taking the shot above, I turned around and shot just across the highway, to the north of the statue: 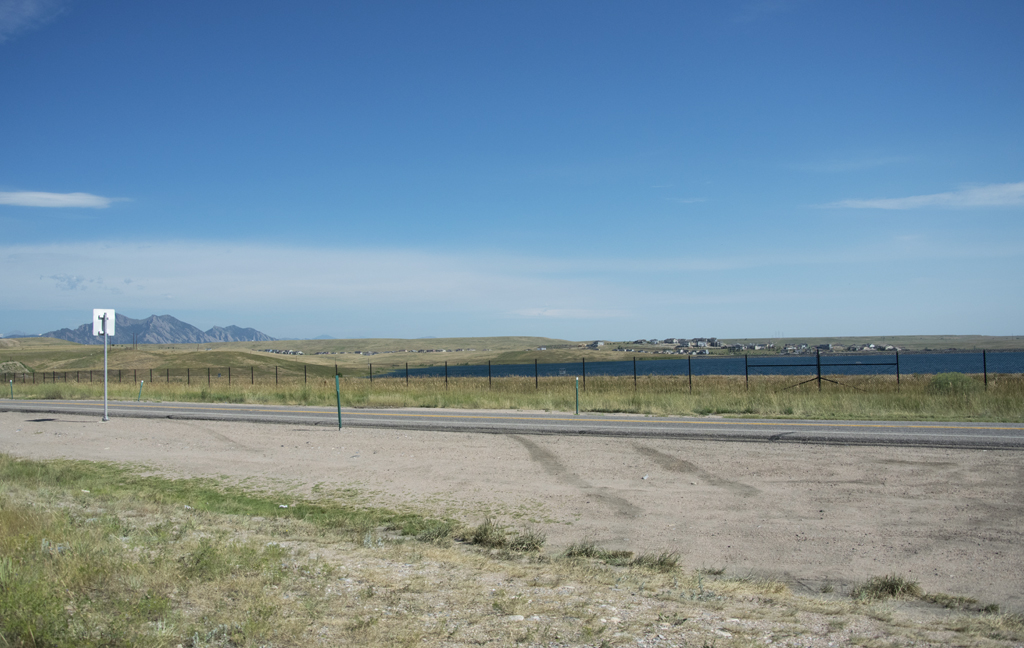 You can see the new subdivisions there, and just beyond them is the perimeter.

Gipe created the statue in honor of his dad, all the workers who spent their lives at the plant and the possible health and other problems that they are experiencing to this day that are not being addressed.

The sculpture was installed in 2015. Only two weeks later, it was vandalized and almost destroyed. Gipe repaired it and now it’s installed behind a fence with lighting and cameras. I saw solar panels that power the electronics. 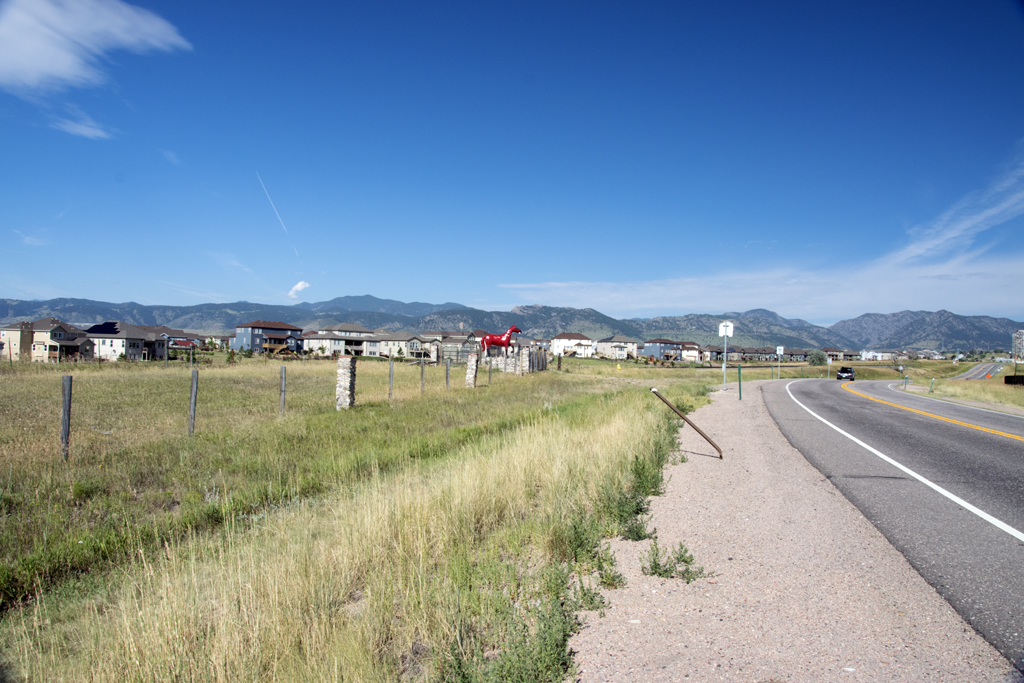 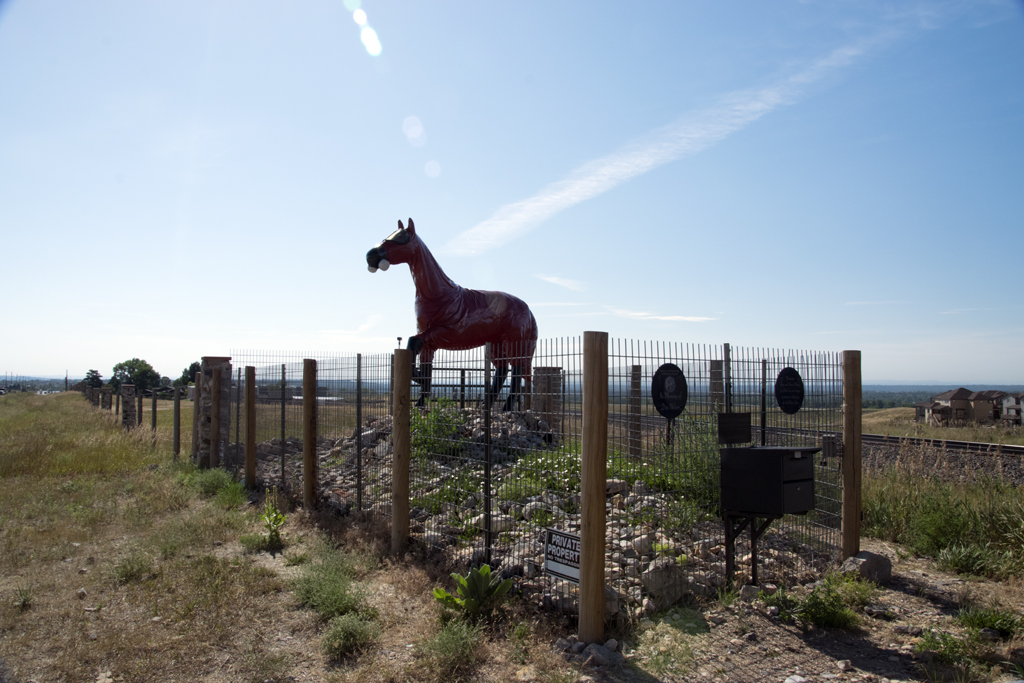 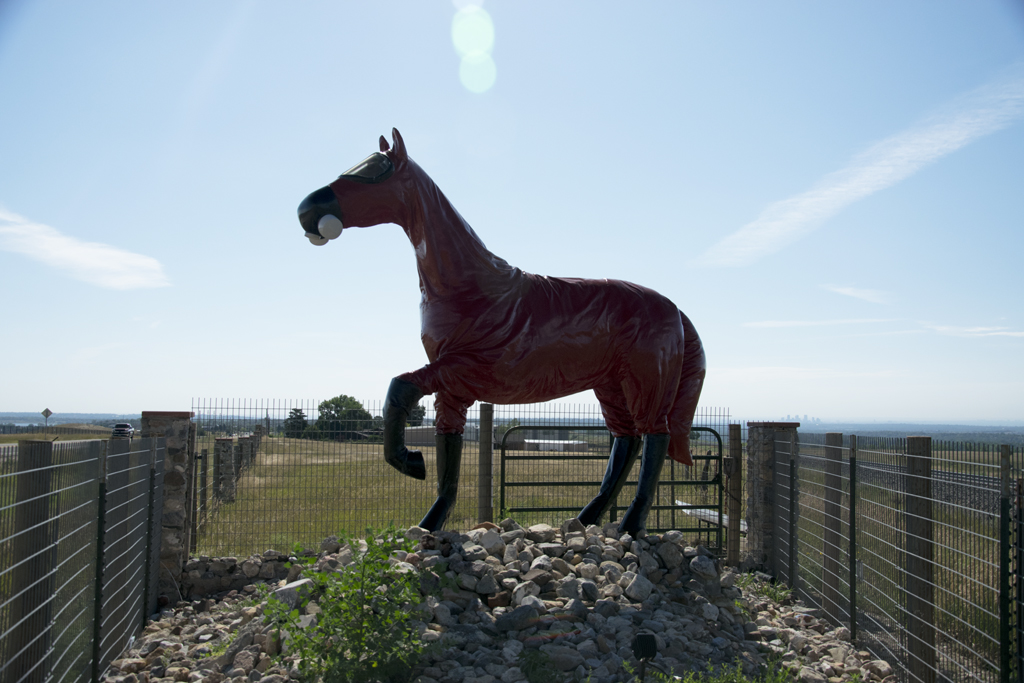 The hazmat suit is quite detailed and realistic. So is the respirator and boots. I don’t have a good shot of it, but the eyes of the horse behind the mask are creepily realistic. 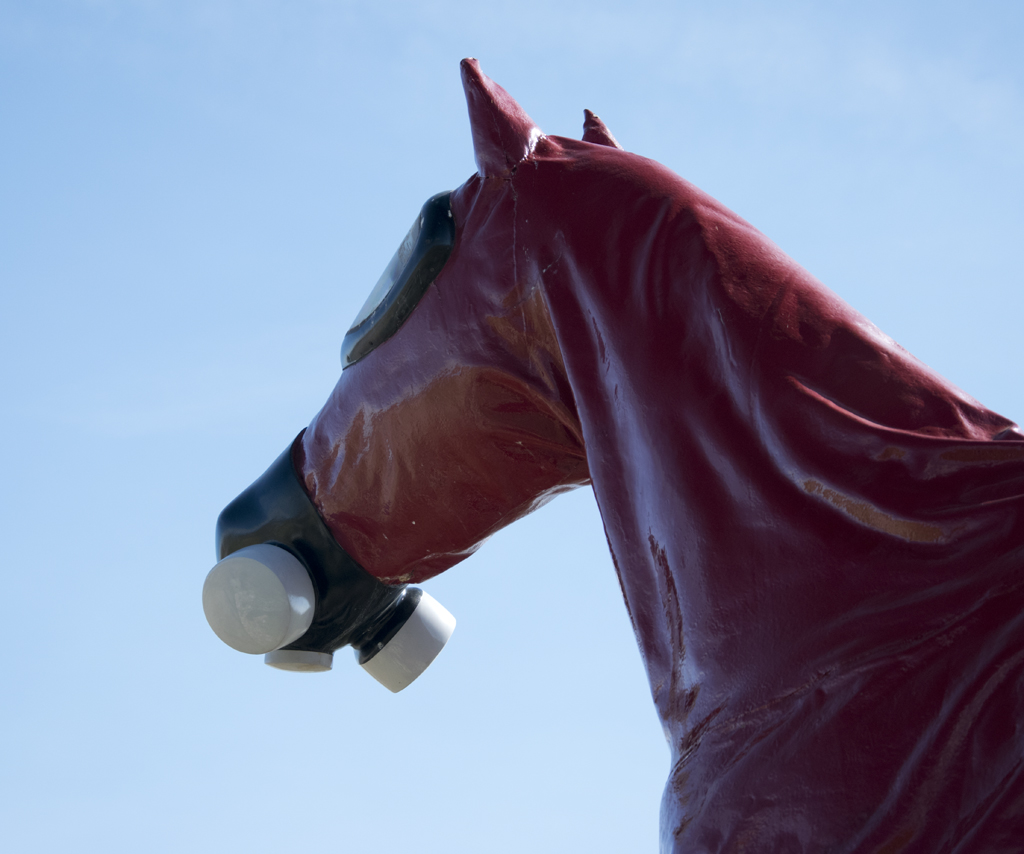 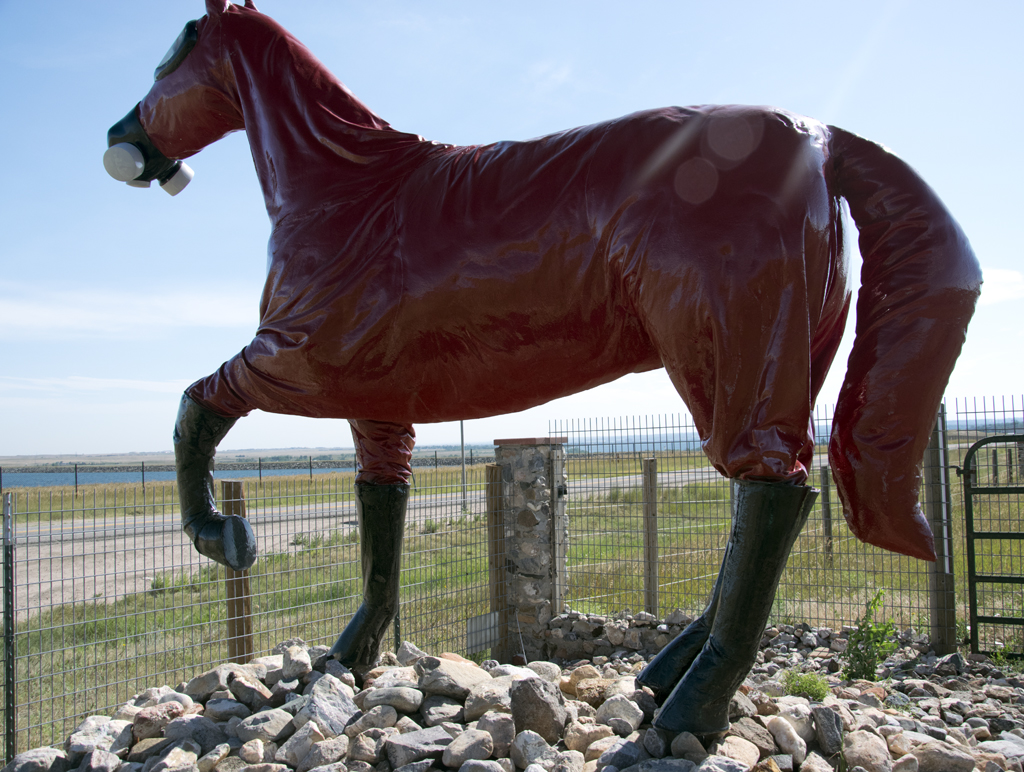 Placards on the west fence pay tribute to, I suppose, Gipe’s father and the people who helped him install and protect the sculpture. Gipe is also politically active in the efforts to bring awareness about and solutions to the problems faced by what he terms “downwinders”. 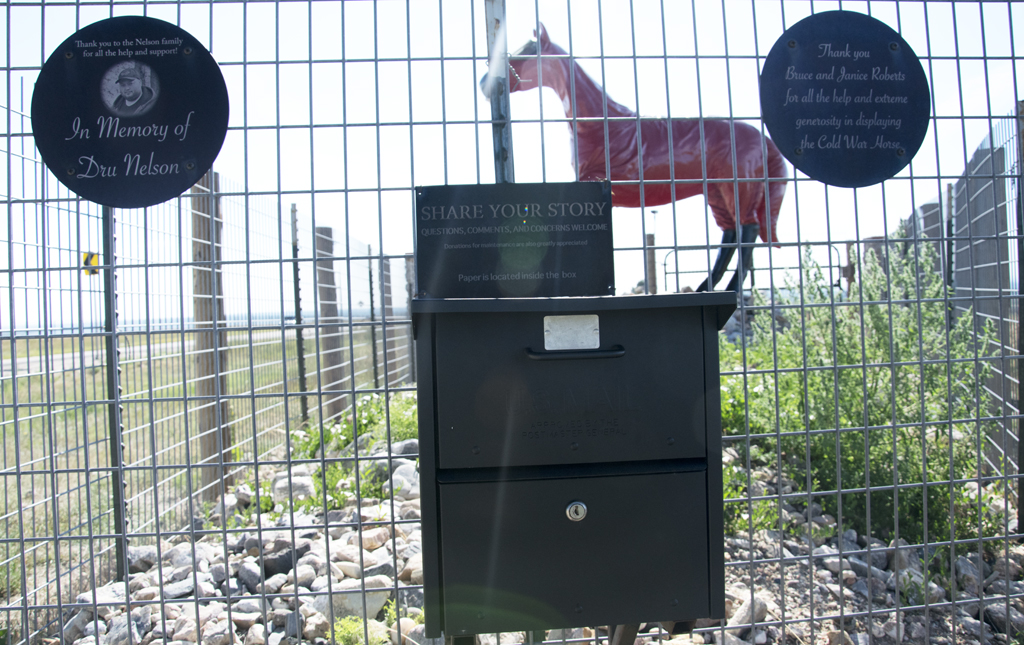 You can also leave personal stories or questions and concerns by leaving written comments in a drop box on the fence, too.

I think the title of the sculpture, Cold War Horse, is wonderful! It combines “Cold War” with “war horse”. And visually it makes a statement with a hazmat suit on a life-sized horse.

The statue is free to visit and stands as a reminder that we should be very careful about a location’s history when deciding its future. I would also point out that a work of art often has a very deep meaning that you should always look into if you can. It’s a real shame that what should be prime real estate with wonderful views of the Rockies must be off-limits because of the irresponsibility of people who should have known better. 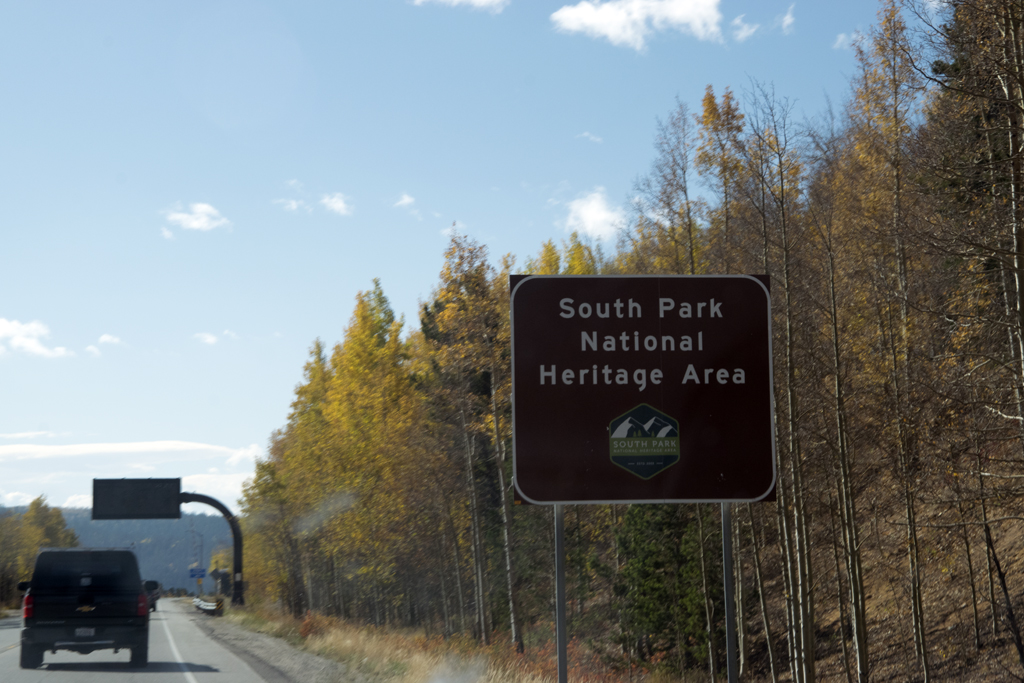