It’s not too early to buy my book

Click below and buy your copy on Amazon, either print or Kindle.

It’s a little recipe book with authentic Czech recipe I collected while living there in 2005. I translated the Czech and European terms and measurements so the recipes are easily done in a US kitchen.

The book has stories about my time in CZ and the photography project I did with my Czech photographer friends in Florida. I was surprised that so many people had Czech ancestry among the throngs that came to our show’s exhibit. Maybe you do, too. This would be a great memento for you or a family member.

Today, as I sit in my lovely new apartment in Florida (it really is pretty special), I am missing Munich a little. Therefore, I will share with you just one of the stunning buildings of my former city of residence. My husband and I discovered it on our mission to see all 111 things listed in our favorite guidebook.

It’s the HQ of the Münchener Rückversicherungs-Gesellshaft, or the Munich Reinsurance Company. Here’s the front of said HQ, and I’m afraid I can’t take credit for this photo; I found it on the company’s website. 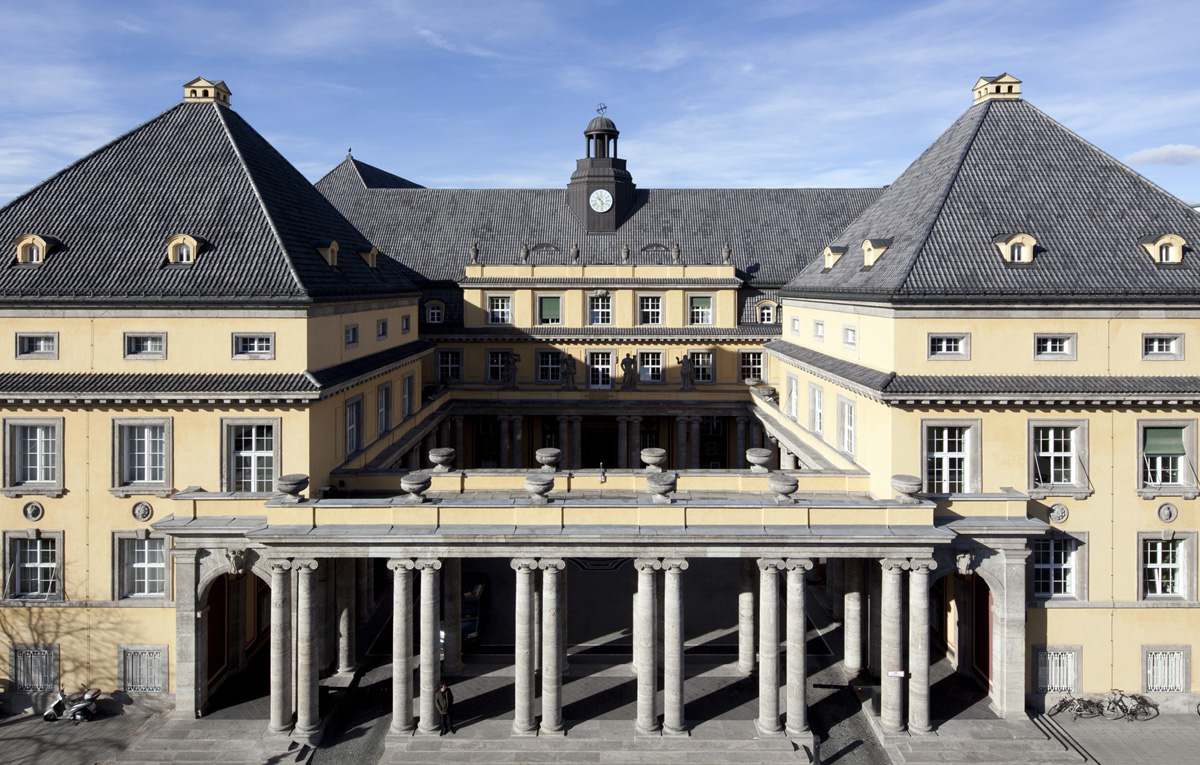 Speaking of websites, you would not believe the internet research I had to do in order to dig up information about this building! I’m more than a little proud of myself. The only thing I had to go on were my pictures of the place and my memory of its location. For this blog, I zoomed in on the name of the company in my pictures and launched my internet search from there. 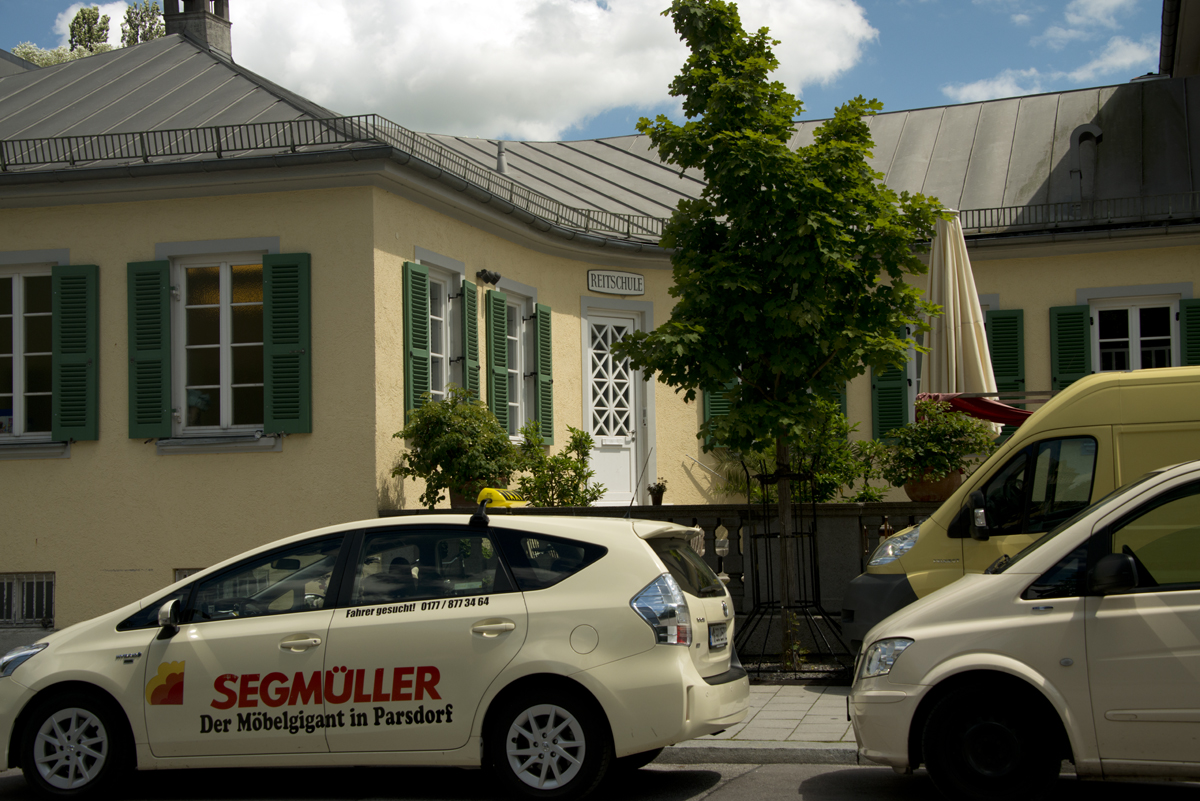 In fact, you encounter mounted riders in the park on its many bridle trails who have issued forth from said riding school. But I digress…

Here are my pictures of the front of the place, which has a great courtyard behind columns in front. Here are the columns close up: 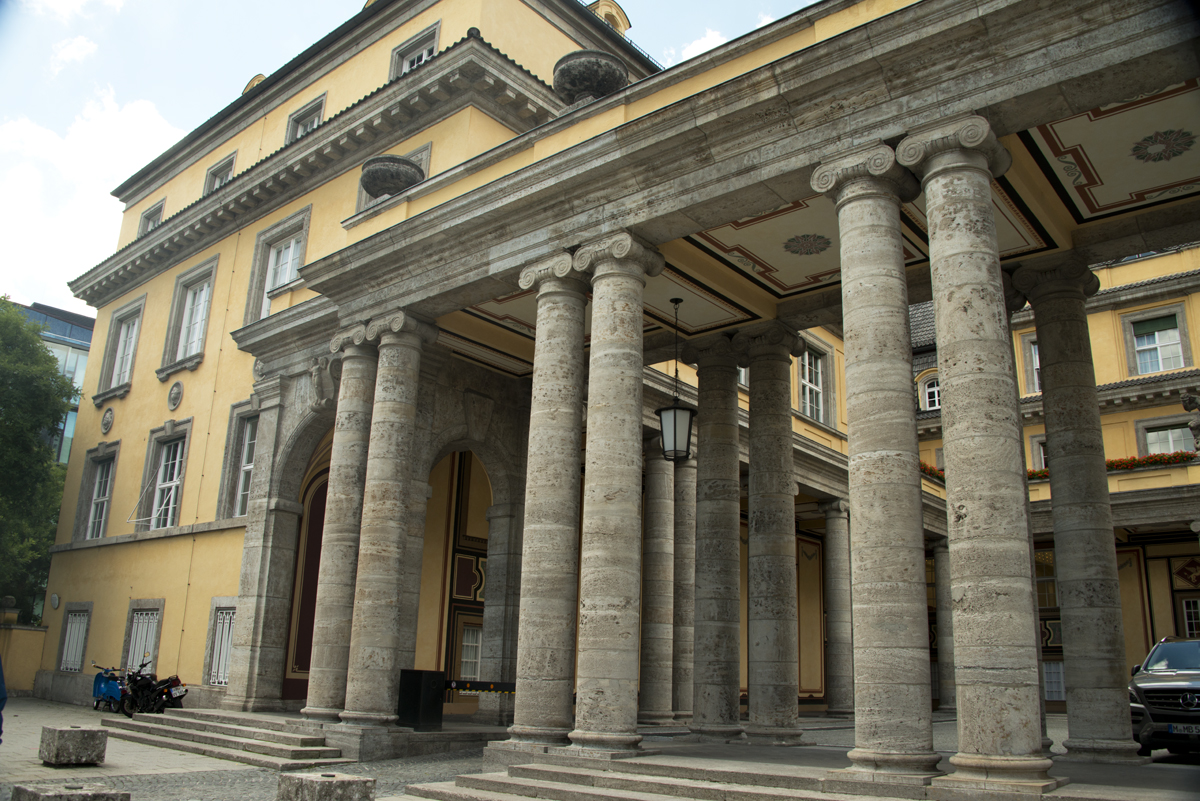 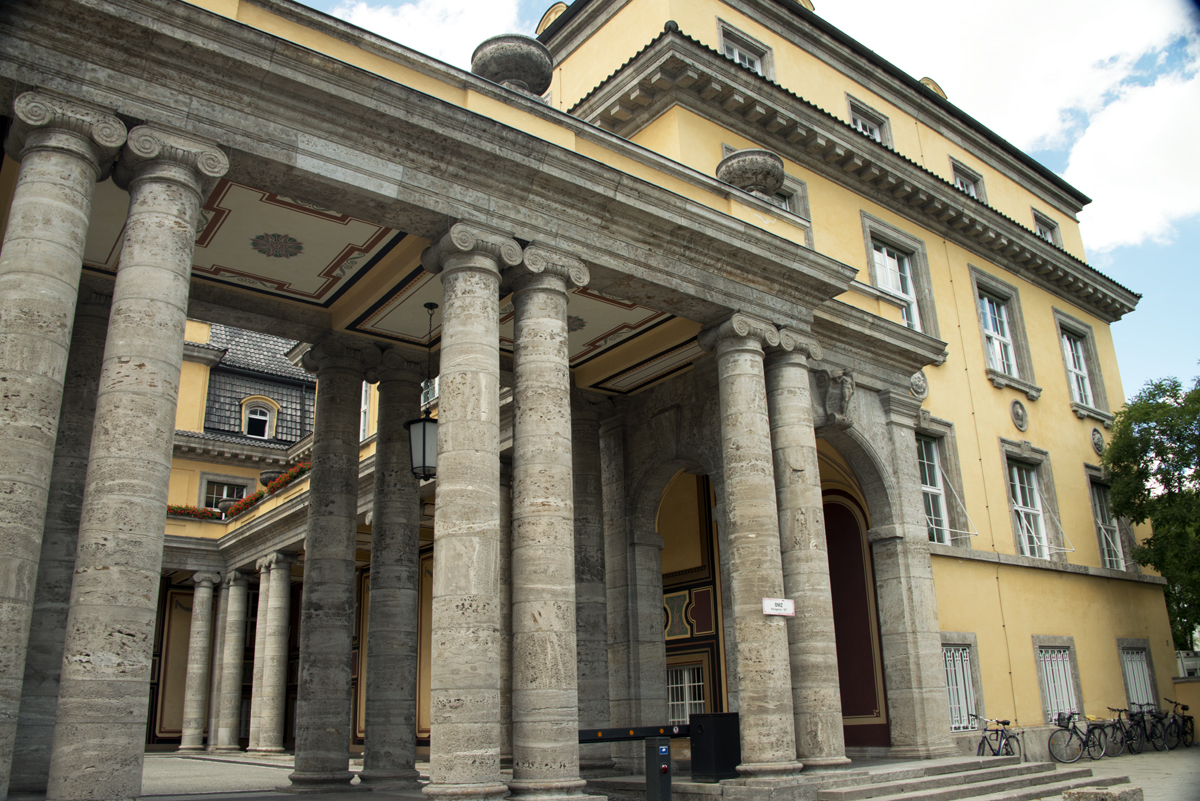 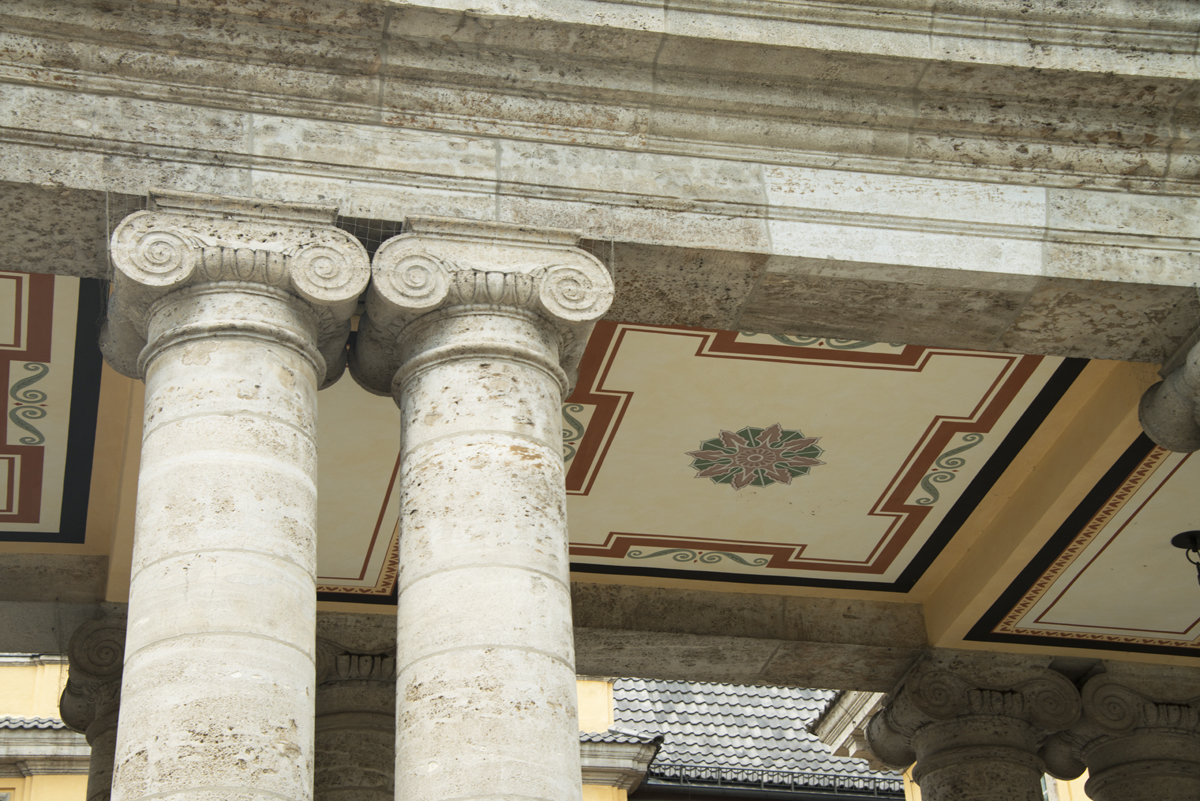 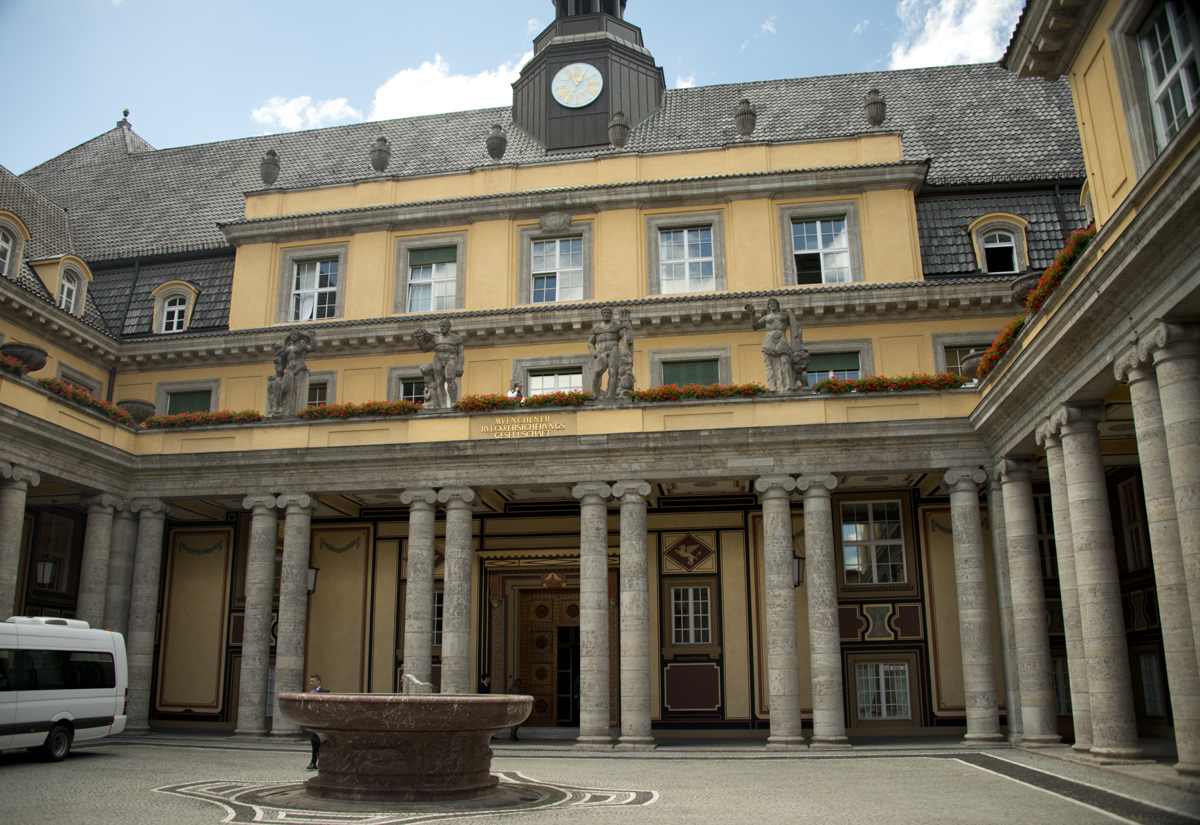 I discovered that Munich Reinsurance was founded by one Carl von Thieme in 1880 in, where else, Munich. It has survived both world wars and many disasters it had to pay out for. In fact, it was the only insurance company solvent after the 1906 San Francisco earthquake claims were paid.
The statues atop the colonnade are personifications of Air, Fire, Water and Earth. The sculptors were Ernst Geiger from Berlin and Josef Wackerle from Partenkirchen. Wackerle was born the same year as Munich Reinsurance was founded, Geiger the year before.
Other interesting tidbits I uncovered: 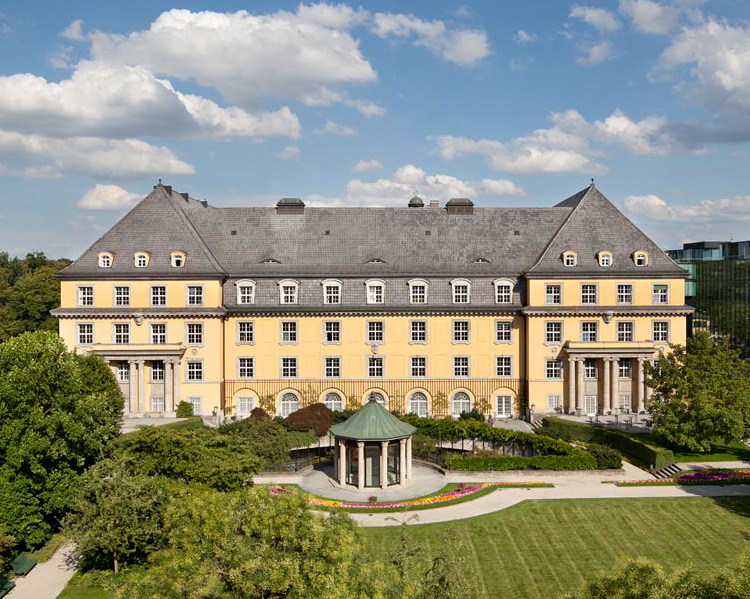 Wish I’d walked around back when I was there! This little park stretches all the way to the next street, which is Kaulbachstrasse.

Another interesting bit of info: The original plans were to have the front door on Kaulbachstrasse so that the park in back merged into the English Garden. However, apparently some people wanted the address on Queen Street instead of Kaulbachstrasse, so the plans were rotated 180 degrees for the actual construction.

Munich Re’s website even had a picture of the building under construction in 1912. See all the guys on the roof?

So that’s my reminiscence of just one of Munich’s grand edifices. I hope you found a little interest and entertainment in my excursion!