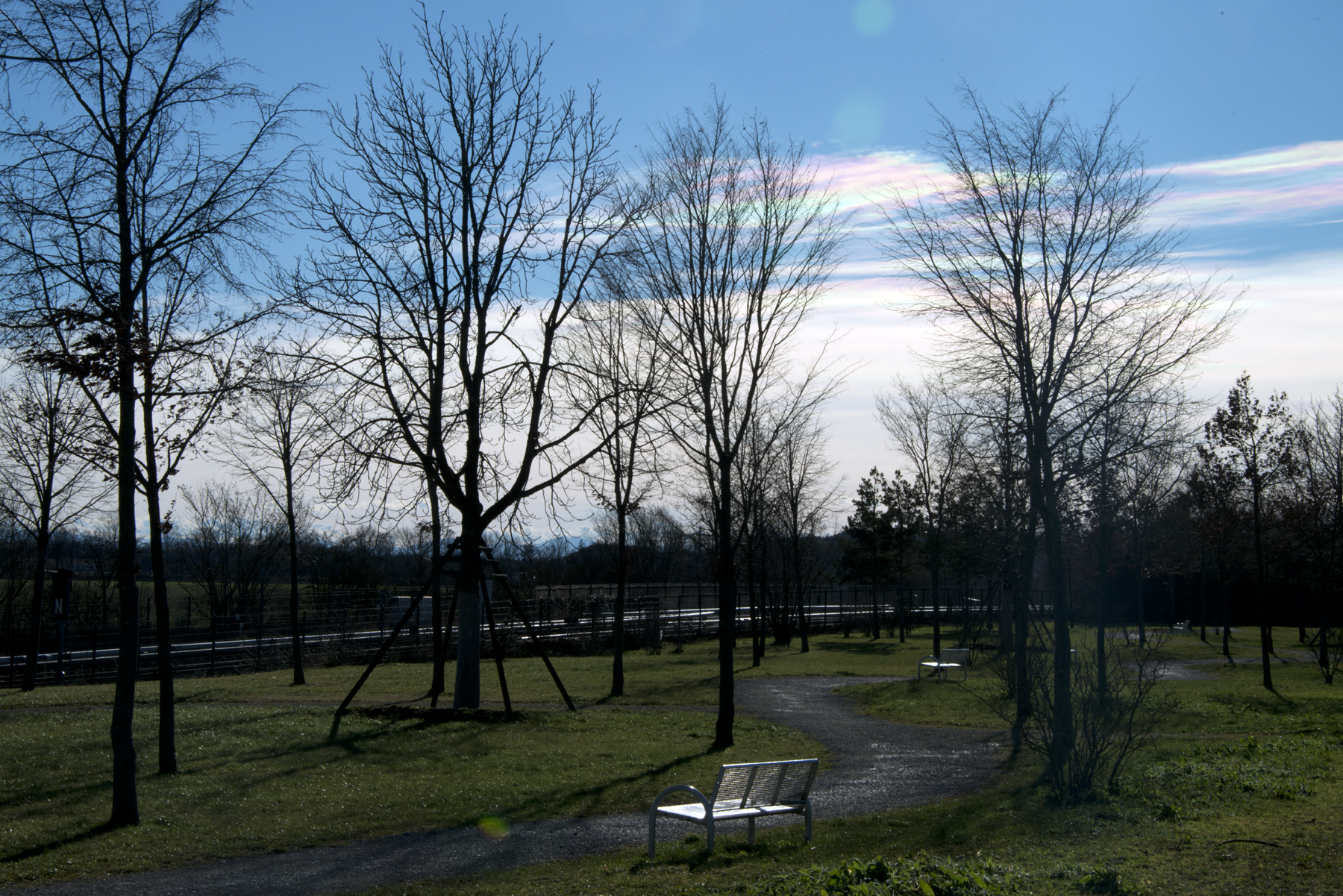 Need a gift for a photographer? A book collector?

That Secret Santa with the weird sense of humor?

Get them one or more of my Photos for No Apparent Reason books!

Choose from four in the series so far. Click here to buy one or more copies!

In a picture in my last post you could see the Alps from near where we live in the Munich area; it demonstrates how close we are to the mountains. Because of those mountains, this region experiences what is called Föhn, pronounced something like the English word fern.

As I understand it, a mass of moist air comes at us from the other side of the mountains; i.e., Austria. The moisture gets picked up from the Mediterranean. When the air encounters the mountains, it starts to rise over them. The rising air cools and rain condenses out of it (onto Austria). The now-dry air pushes over the top of the Alps and gusts into Germany.

This created the three or so very windy days we had last week. There were constant gusts of about 12 to 15 miles per hour. The air is also very warm and brings the lovely, spring-like temperatures we enjoyed. It was in the low 60s last week and very sunny; compare this to the below-freezing temps, deep snow and gray skies of the week before. The dry air also sucked up all the melting snow, so there was no danger of sudden flooding.

Interestingly, Föhn, and a variant, Fön, also means “hairdryer” in German; my hairdresser asks me if I want Föhn after my haircuts. I think it was a trademark in the past. You can see how this dry wind would be compared to a blow dryer.

But back to that wind. Another effect of Föhn is the unusual cloud formations and colors over the mountains. All my Florida friends might pooh-pooh, but it’s very unusual to see skies like this around here: 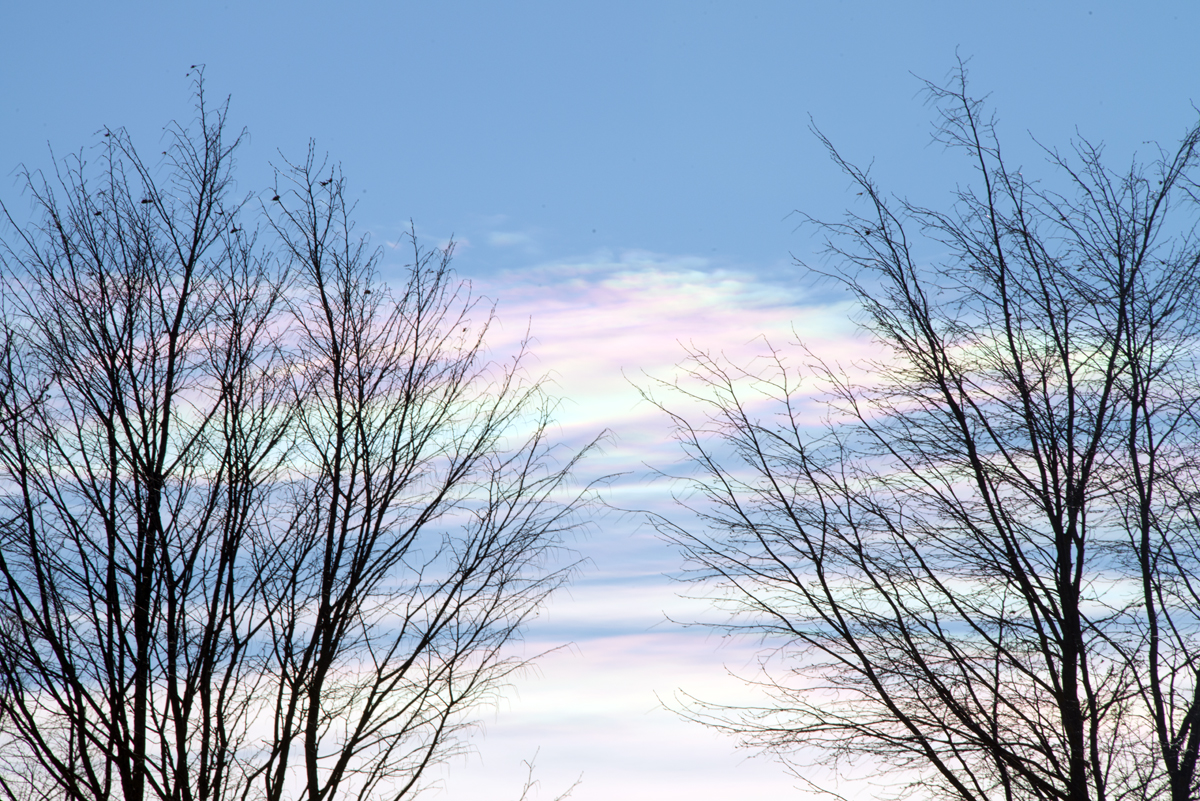 Another result of this weather is how it affects human physiology. I myself had a nagging headache for a couple of days and many others complained about migraines and arthritis flare-ups. Even the weather forecasters predict lots of headaches when predicting Föhn. And just as emergency workers and police report increases in crazy people during full moons, Föhn apparently causes these kinds of things to happen, too.

Because the weather was so great, my husband and I journeyed out on Sunday to check a couple more items off the list in our “111” book I told you about last week. This excursion took us to the English Garden, which is Munich’s version of Central Park. Here’s what we encountered:

Flags flying at half-staff at a mansion in support of Paris after its recent terrorism: 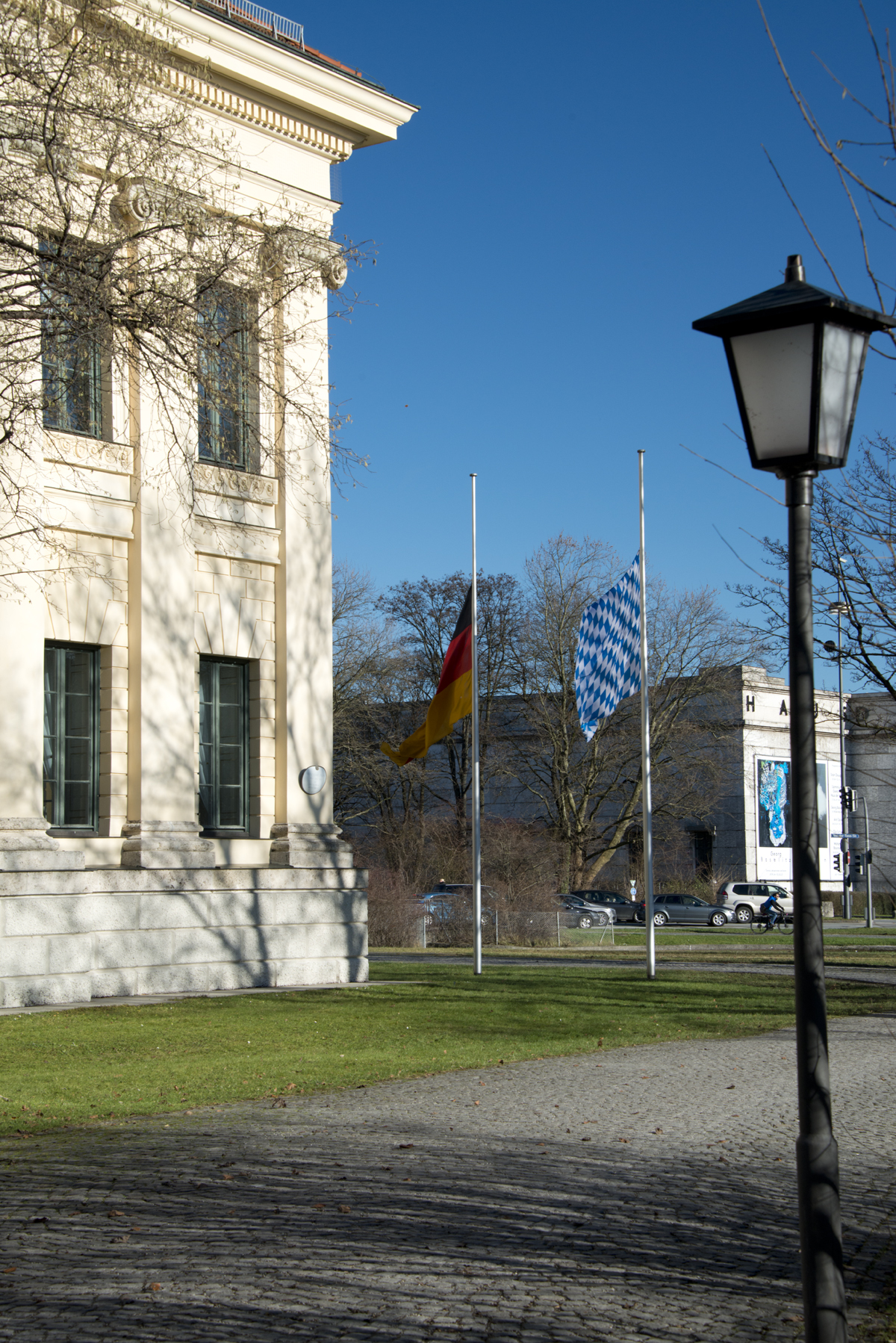 The grand mansion is the Prinz-Carl-Palais (Prince Carl’s Palace) and was originally built in 1806 for a teacher of a future king in Bavaria’s royal line. It got passed around a few times and is now the official seat of Bavaria’s Prime Minister. I think it’s used mostly for state visits and dinners.

In this photo, the building in the distance is the Monopteros, a stone, Greek-style temple that replaced a wooden “Apollo’s Temple” near it. The Monopteros and its hill were built in 1836. 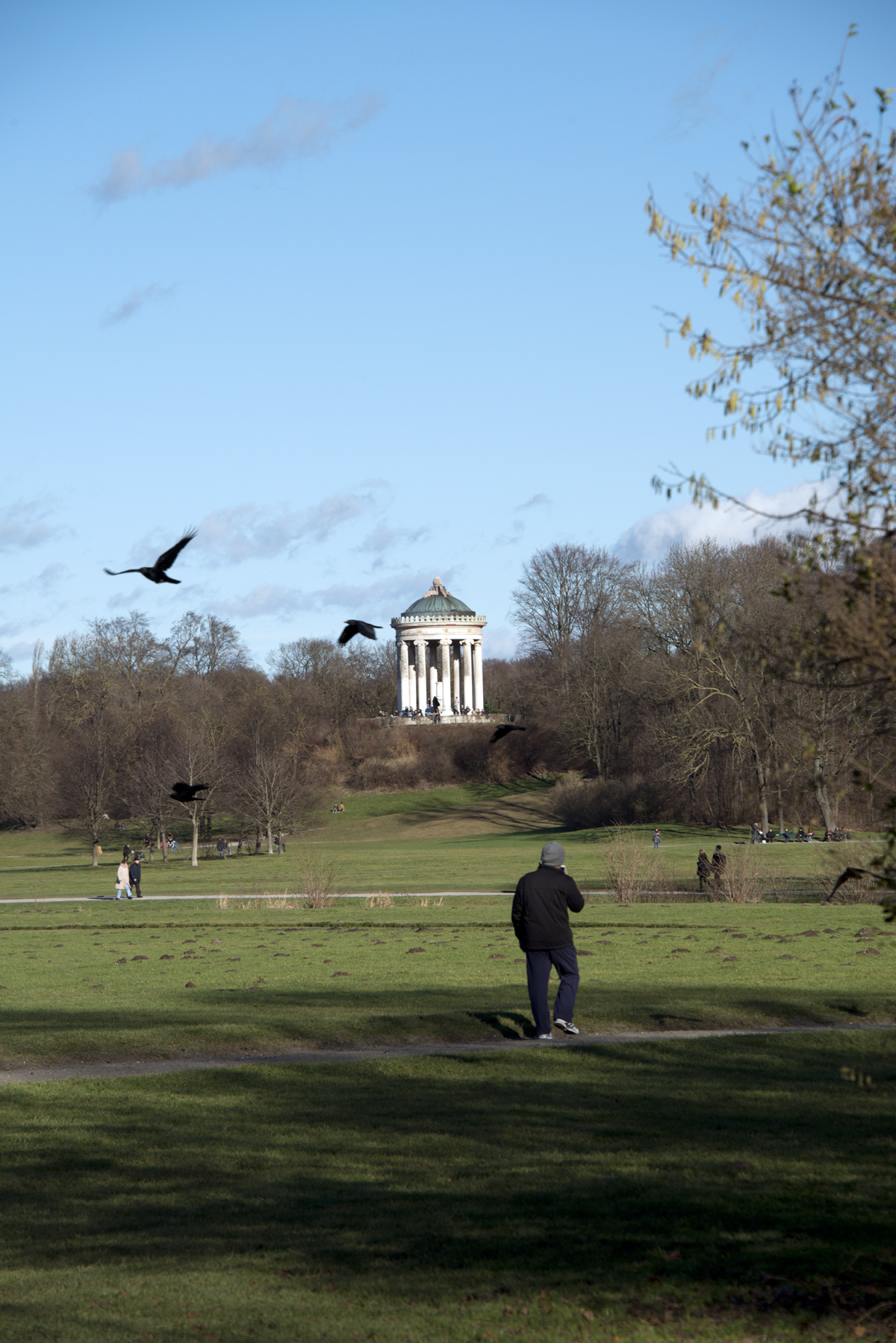 Now this one was in the book: 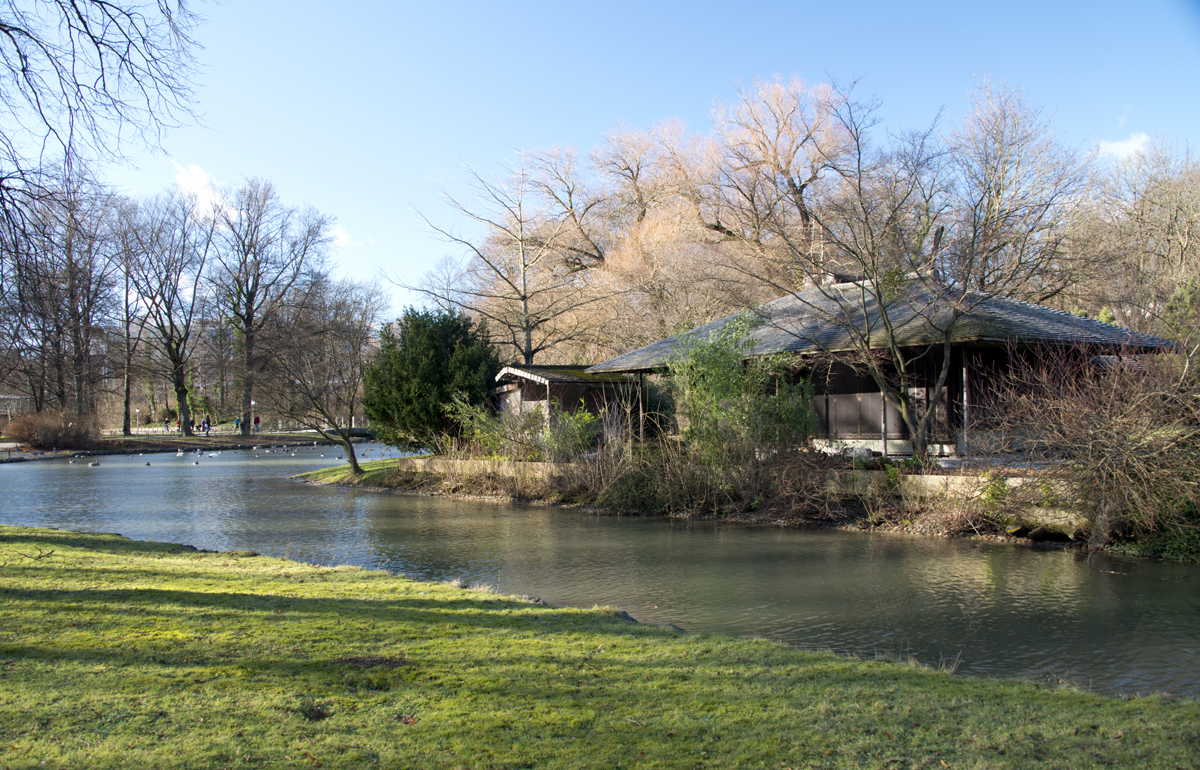 It’s the Japanese Teahouse, called KanShoAn, a gift from the Japanese city of Sapporo to Munich in 1972 on the occasion of the Winter Olympics. It’s not open except for demonstrations of the Japanese Tea Ceremony, held one day a month April through October. Apparently, too, there is a Japanfest in July every year. I need to check that one out.

Next one was in the book, too. It’s the Milchhäusl, which means “little milk house”. It’s an organic snack bar and beer garden, of all things, right in the park: 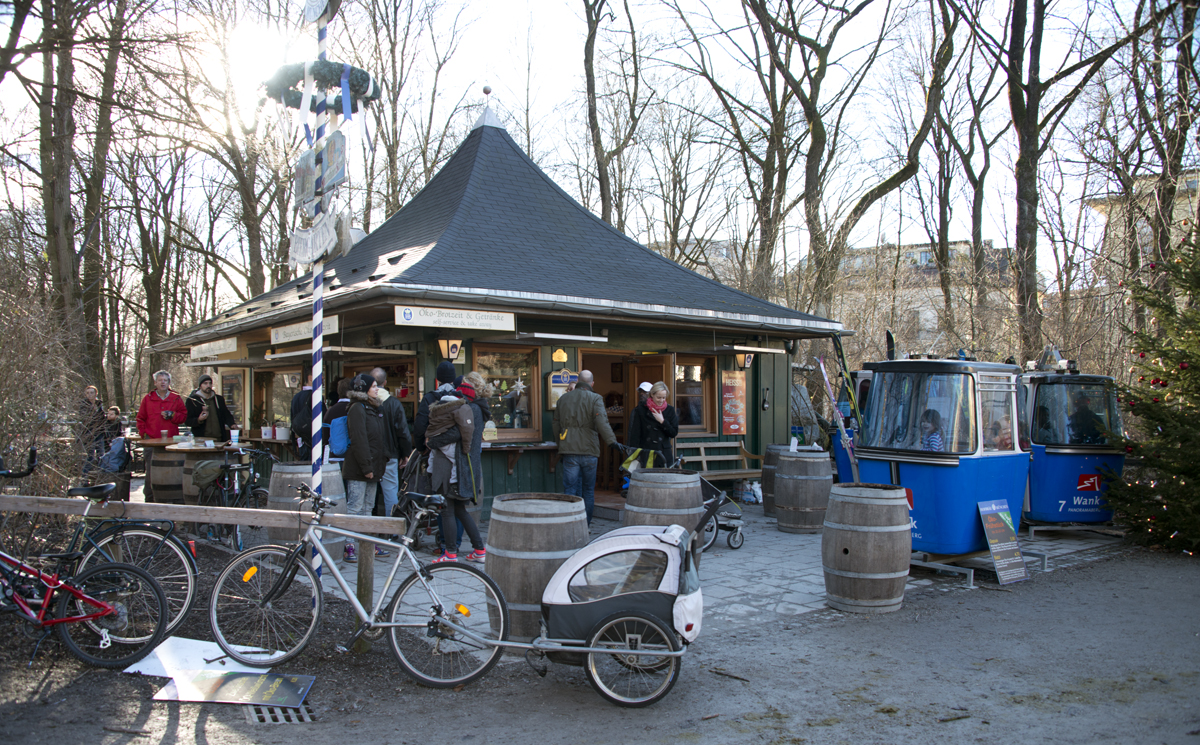 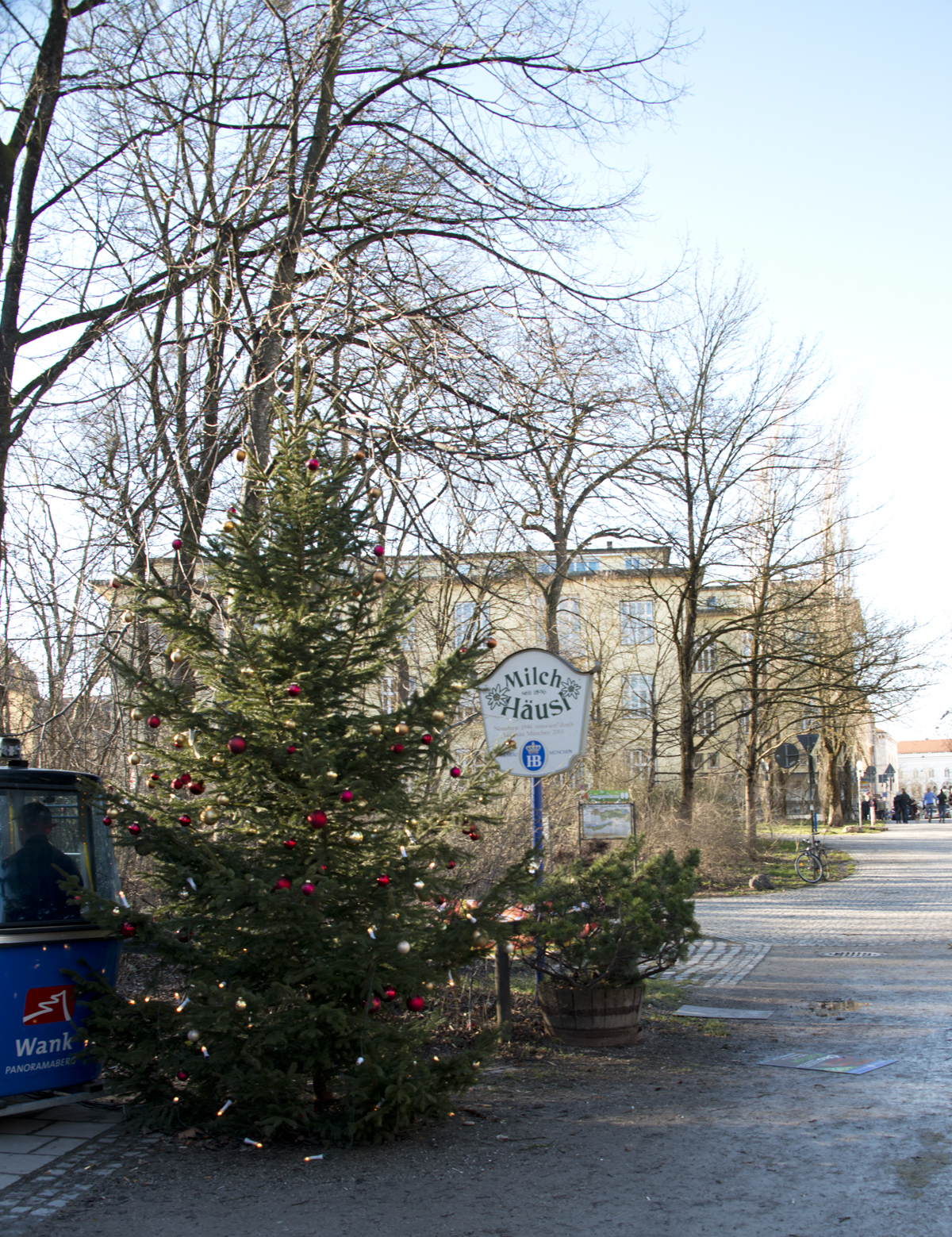 And some of the outdoor tables looked like gondolas from cable ski lifts, for some reason: 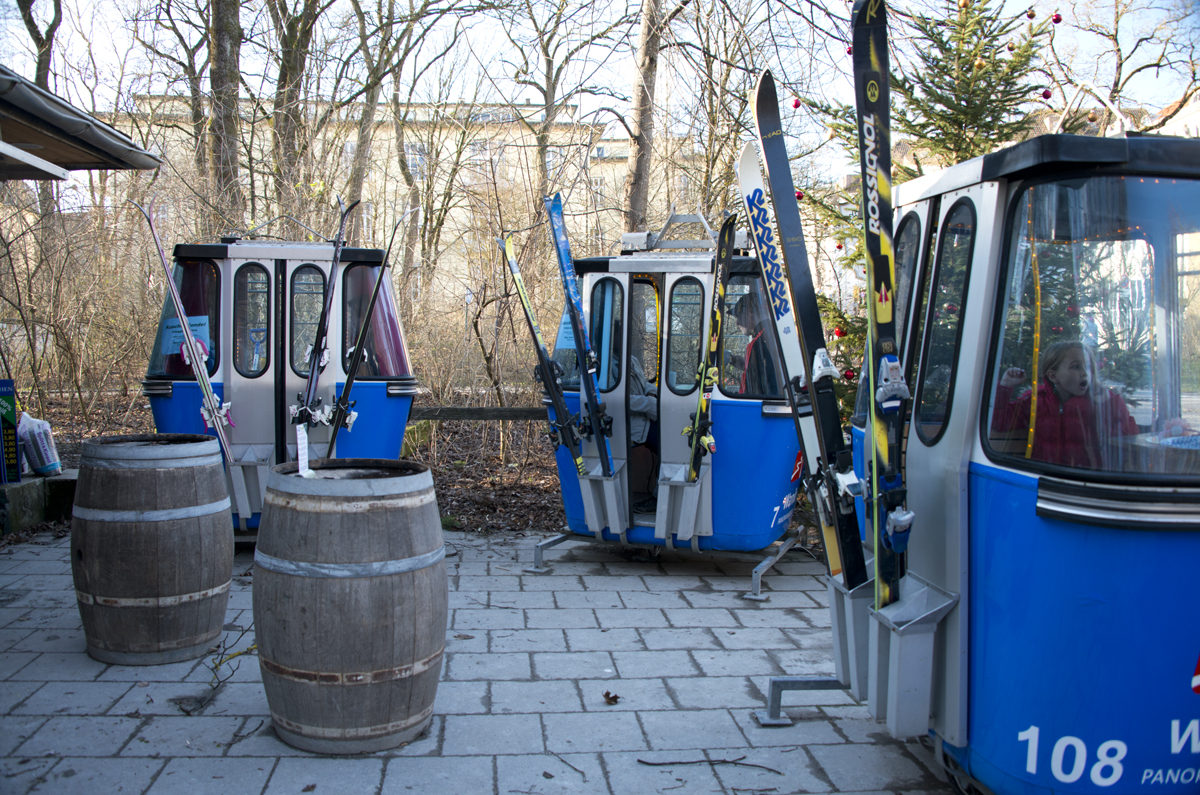 We turned back and strolled just outside the park, enjoying the weather and beautiful houses along the neighboring street. Still warm, still windy, still beautiful.

As we neared the south end of the park where we started, I was astonished to see the US Consulate, a place we’d visited last year because we needed to get a US notary seal on some documents! I’d no idea it was in the same neighborhood and just across the street from the Prinz-Carl-Palais. I hadn’t seen it earlier because the entrance to the park is an underground passage, not a street crossing. I snapped a picture, though it’s not usually advised when terrorism has just occurred close by. And of course a German Polizei officer appeared at my shoulder. But he smiled and continued on his way. Guess I’m not on the list.

Just in front of the Consulate was another surprise – a piece of the Berlin Wall. I never knew this monument was here in Munich: 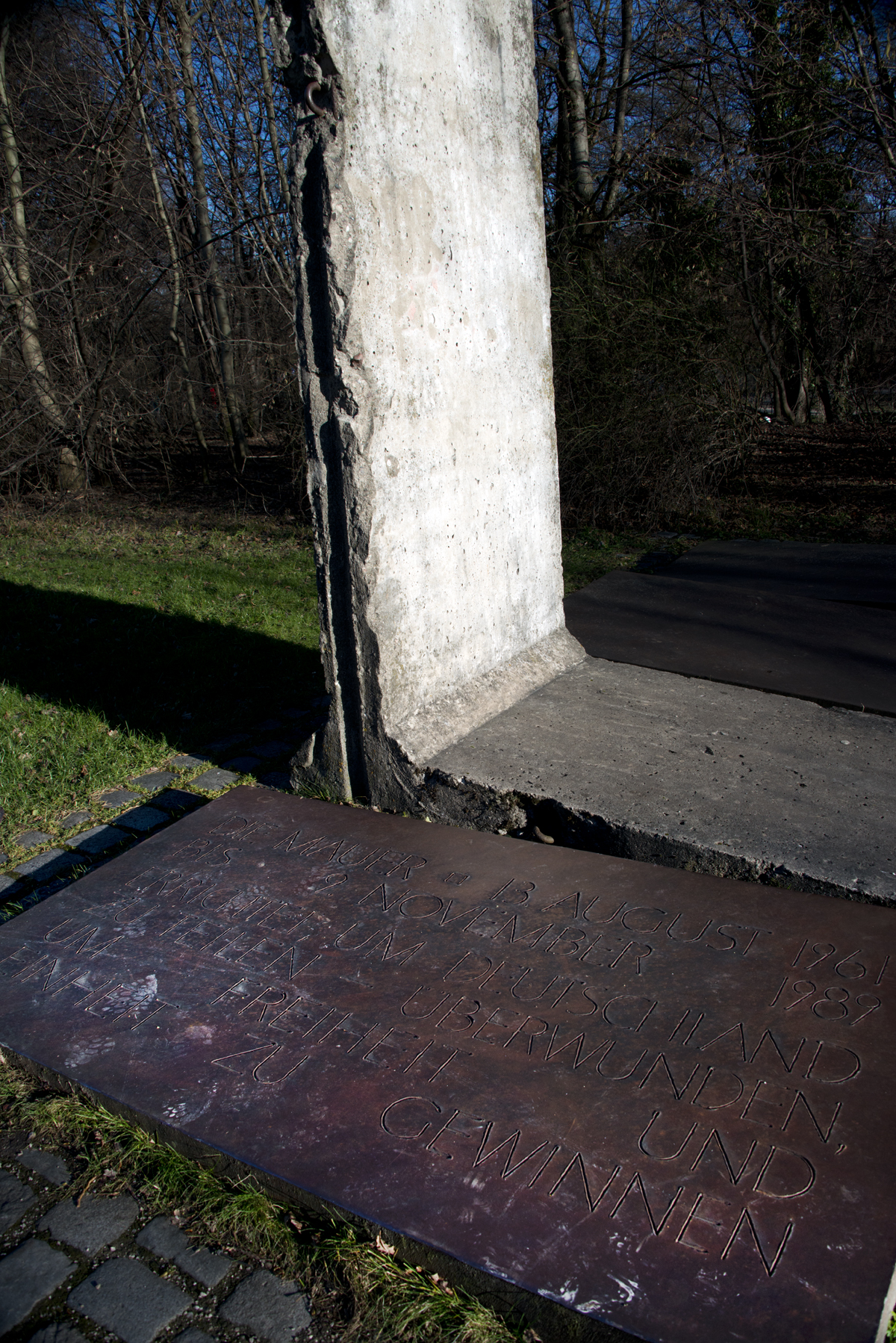 The inscription on the metal plate beside it reads,
“The Wall – 13 August 1961 to 9 November 1989
Erected to divide Germany –
Overcome to win freedom and unity”

On our way back through the Residenzhof, I got this photo: 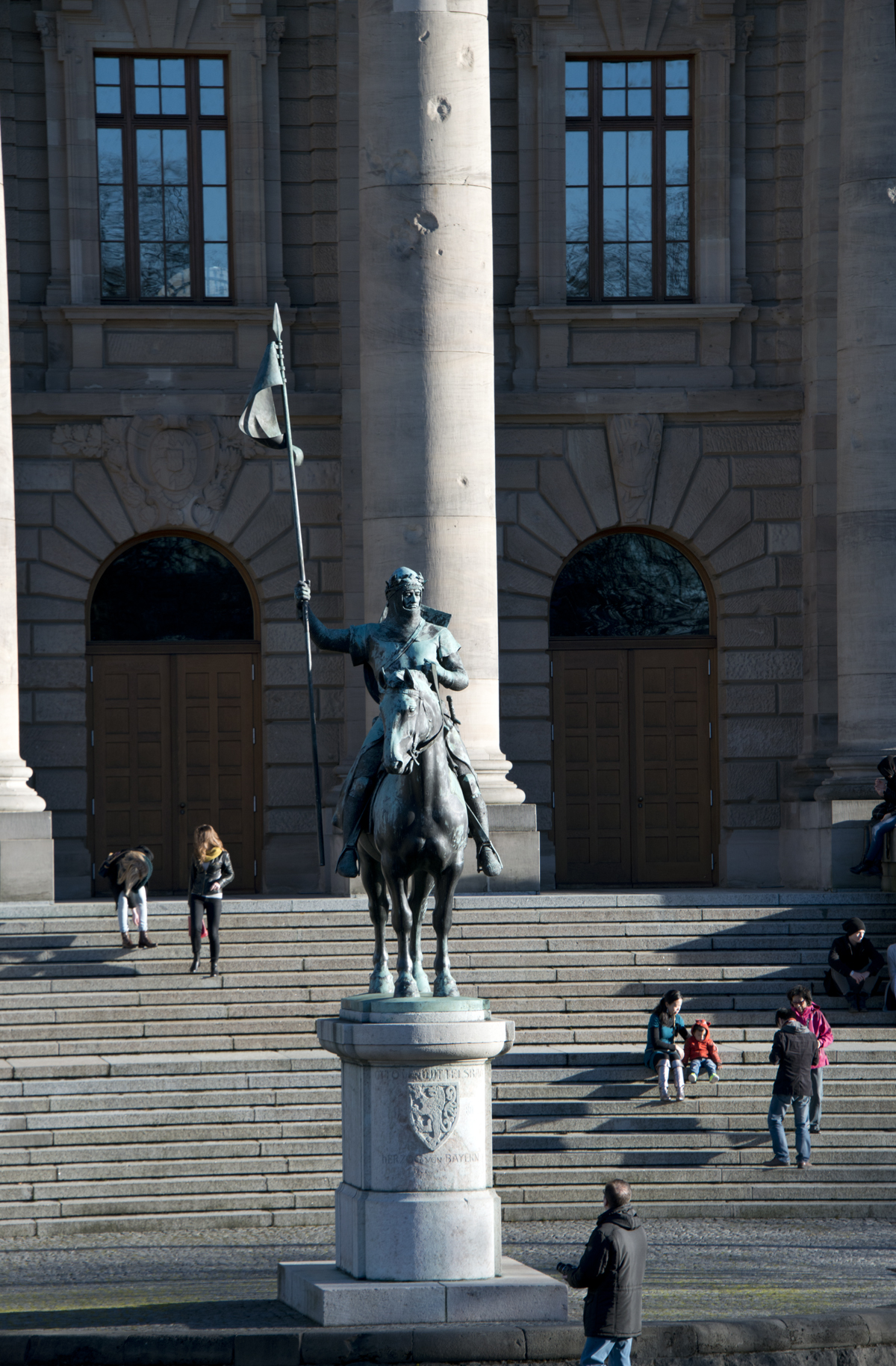 The mounted knight is Otto von Wittelsbach, Duke of Bavaria, and a relation of “Mad” King Ludwig. The building behind him is the State Chancellery. Notice the columns have chunks missing. The damage is from WWII bullets. This building was one of the last to be restored after the war. You can see an interesting picture of it from as late as 1985 in its deteriorated state here. I suspect they left the bullet damage on purpose as a memorial gesture.

The beautiful day continued into the evening. Overnight, about 3:00 a.m., I woke to the sound of a few raindrops on the window. A few minutes later, the wind abruptly stopped and the vise grip on my head released. The Föhn was over.

And here was the weather the next morning: 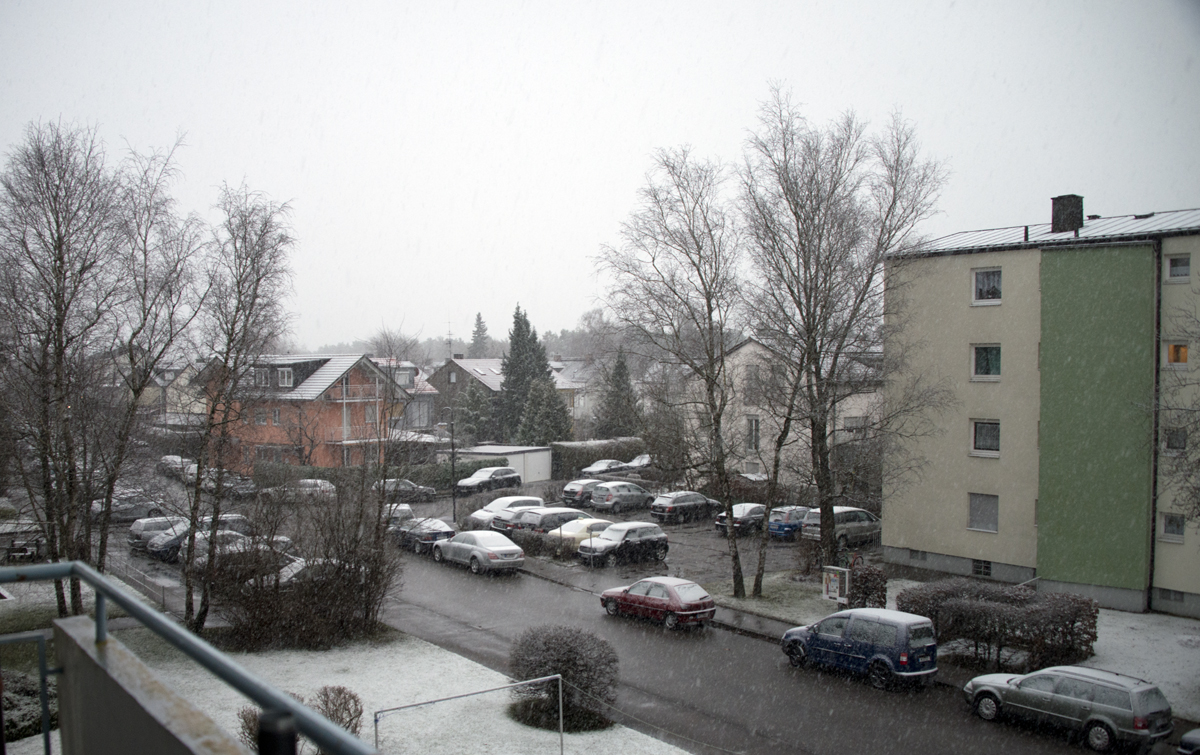 Good thing we went out the day before!

It became warm again, however, and yesterday was grand and sunny. Maybe the Föhn is returning. I love this spring weather, but I’m not sure it will last. I’ll keep you posted. 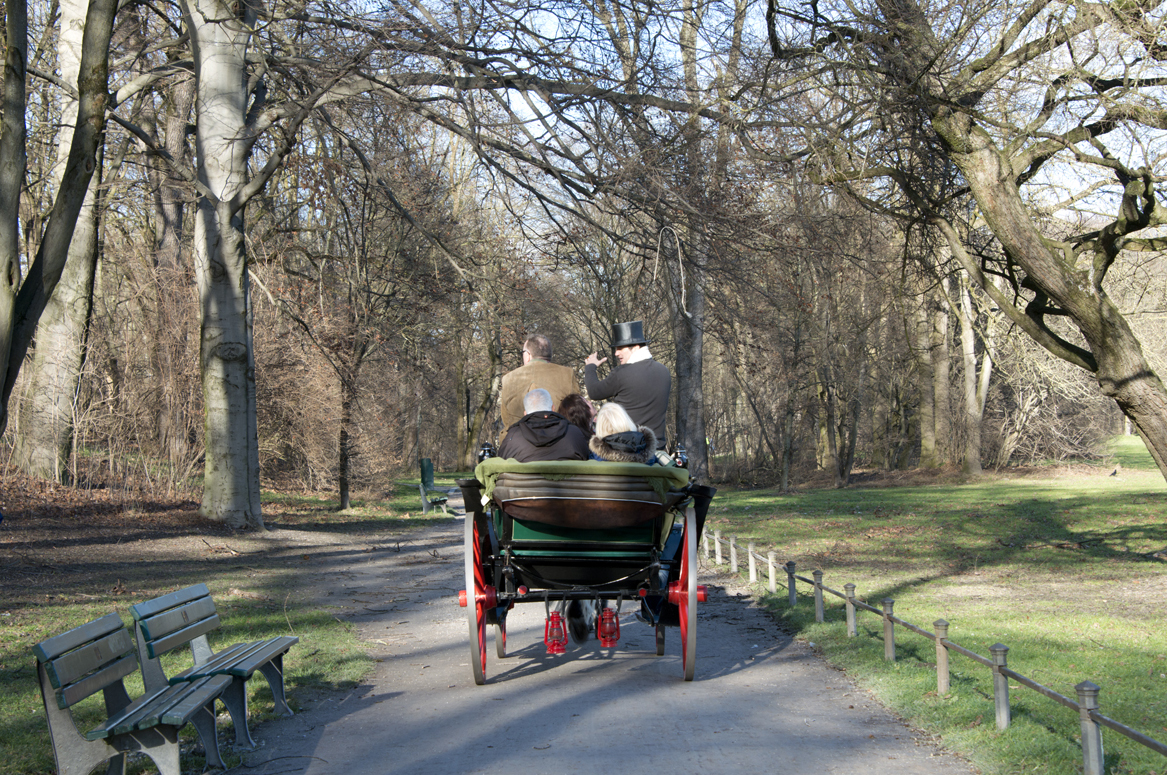