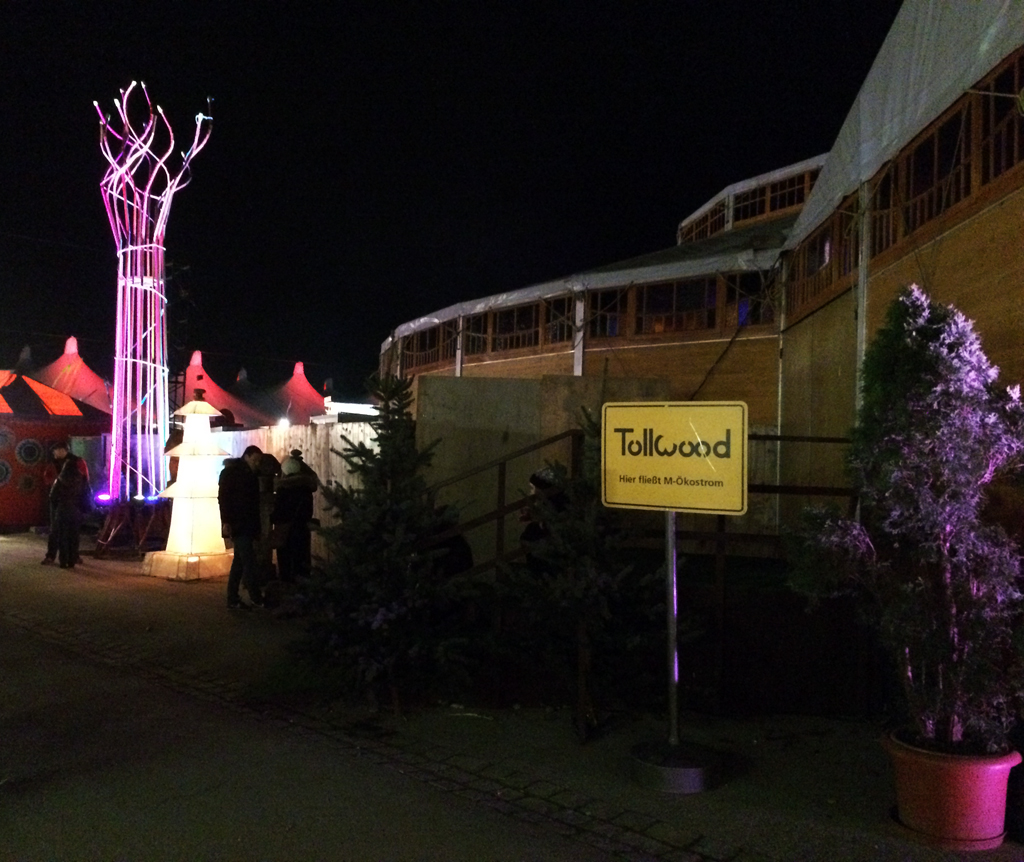 Shop all my books!

I’ve got photo books (Photos for No Apparent Reason),

and other interesting stuff (coloring Easter eggs with traditional methods).

Before we get into this post, have YOU subscribed? If so, you are receiving the ATFT Quarterly Newsletter in your inbox. Each newsletter contains a list of all the posts from the previous quarter, plus news about what’s going on with me and the blog. Subscribers also get notified of every blog post, including TBTPs. Sign up today!

This week I’m more than a little nostalgic about my time living in Munich, especially since friends tell me they have a lovely blanket of snow and the city looks wonderful! Therefore, this post is about Munich’s Tollwood Festival. Tollwood is a progressive, funky event held twice a year.

I should mention that the festivals are presented by Tollwood, Ltd., a private company that also has a non-profit branch. The two fests aren’t the only thing they do. Tollwood is seriously dedicated to multi-cultural and ecological concerns. They crusade for animal rights, defend the environment and promote cross-cultural ideas. The fests reflect that, with dozens of food stalls from many cultures and music and art from people all over the world. It makes you feel good to walk through a Tollwood fest!

My first experience was at a winter Tollwood, so I’ll start with that. The winter fest happens from late November through most of December. It occupies the Oktoberfest grounds, so it’s right downtown, easily accessible via subway (the stop is Theresienwiese). The most recent iteration (2017) was November 23 – December 31, with their famous New Year’s Eve ball and fireworks at midnight.

Here are some shots from the winter Tollwood the first time I was there: 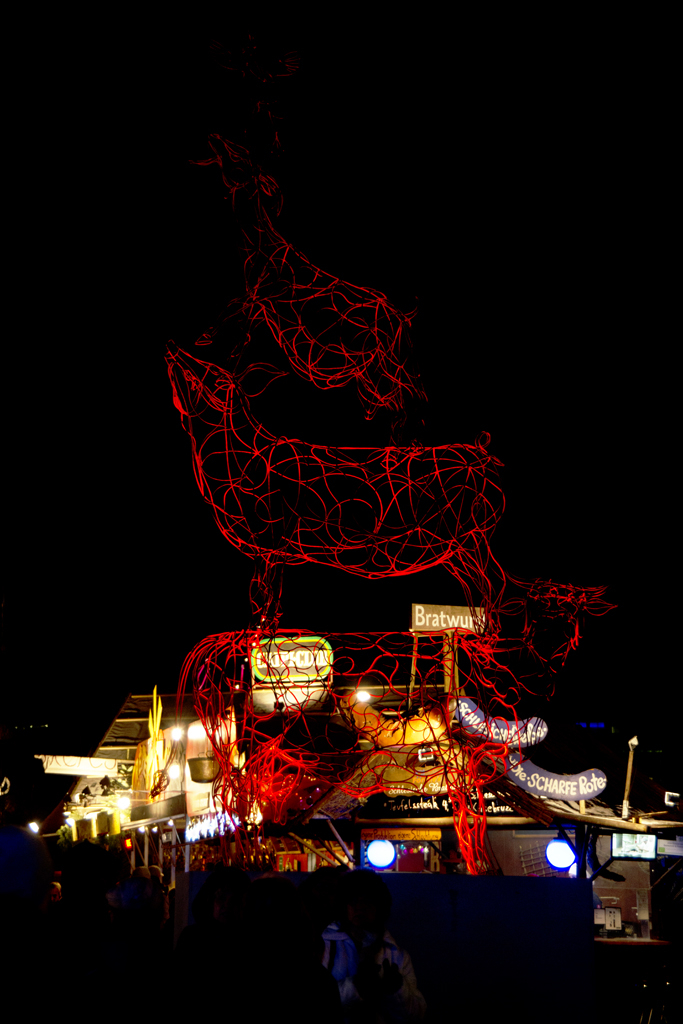 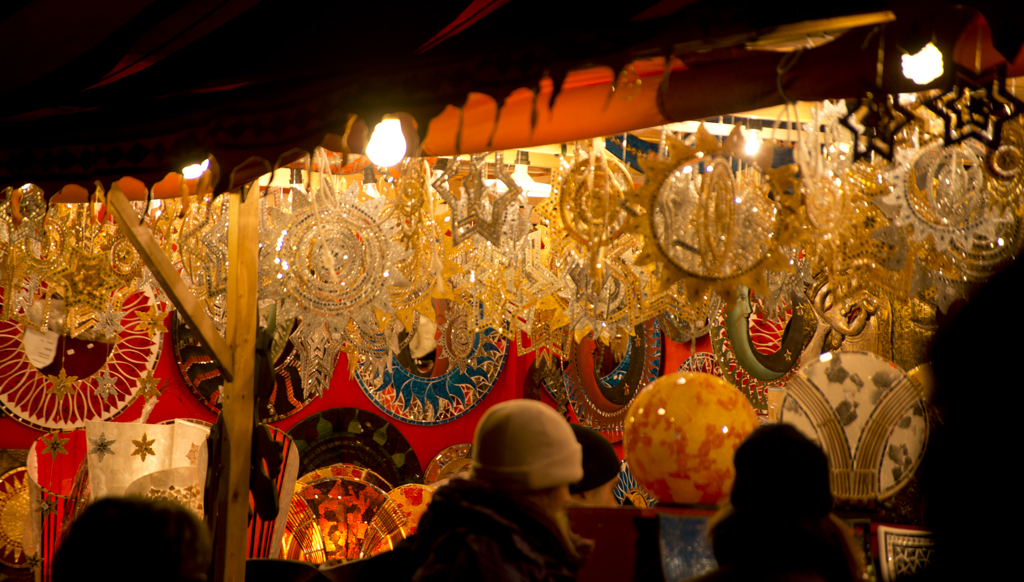 You’ll have to imagine a lot of people talking amid two or three types of music that reach your ear at any given time. The festival is mostly free, but some of the shows require paid tickets. Here are some iPhone shots from my second winter Tollwood: 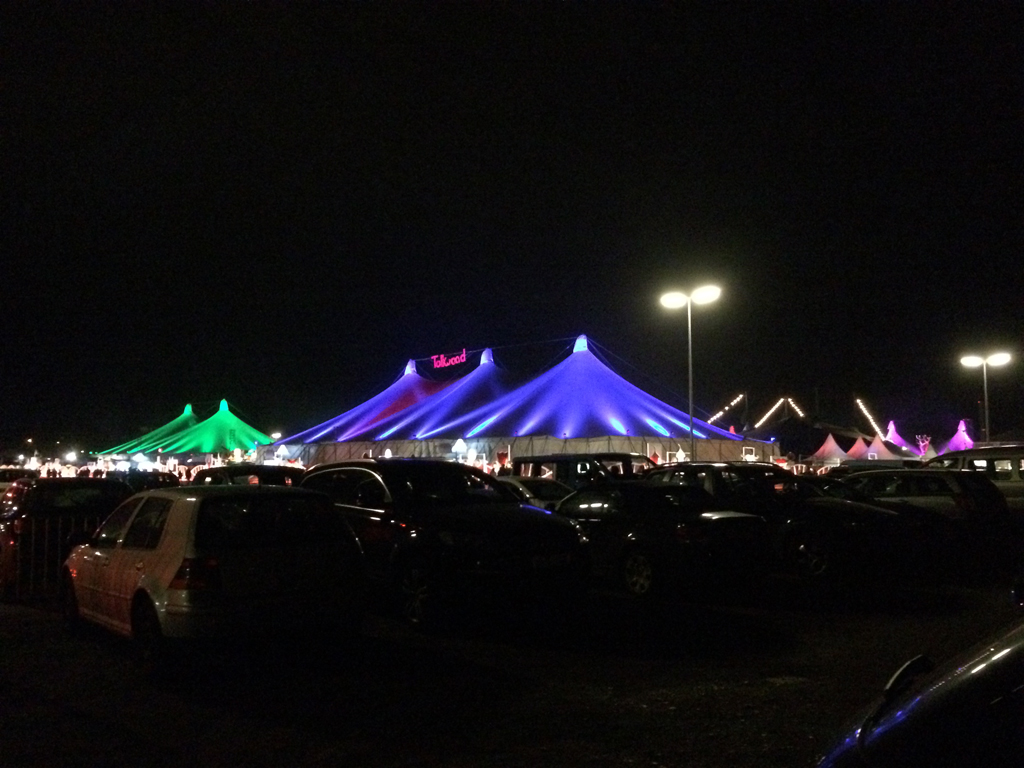 We went in the back way that time:

Take a moment with this next photo. It’s actually a giant pink pig with steam coming out of his mouth and nostrils (you can only see his head here): 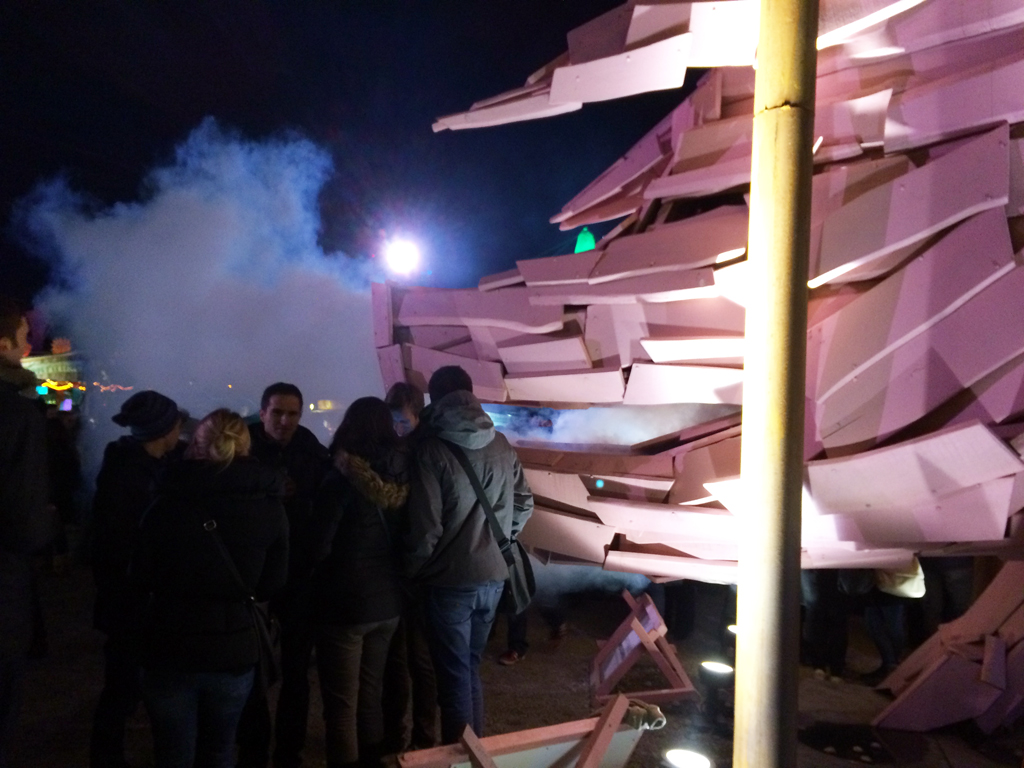 True to their animal-rights stance, it was a piece of art denouncing animal-processing plants. And as a tip of the hat to the environmental causes, the pig is pieced together using discarded building materials. Plus his steam was LOUD!

My second time at Tollwood was a summer fest, which is held near the Olympics grounds in Munich. The very first Tollwood fest was held in that spot in 1988. The winter one started in 1991. It was a very rainy day when we arrived and practically no one was there at the time we showed up. It was appropriate that the playground looked like an ark. 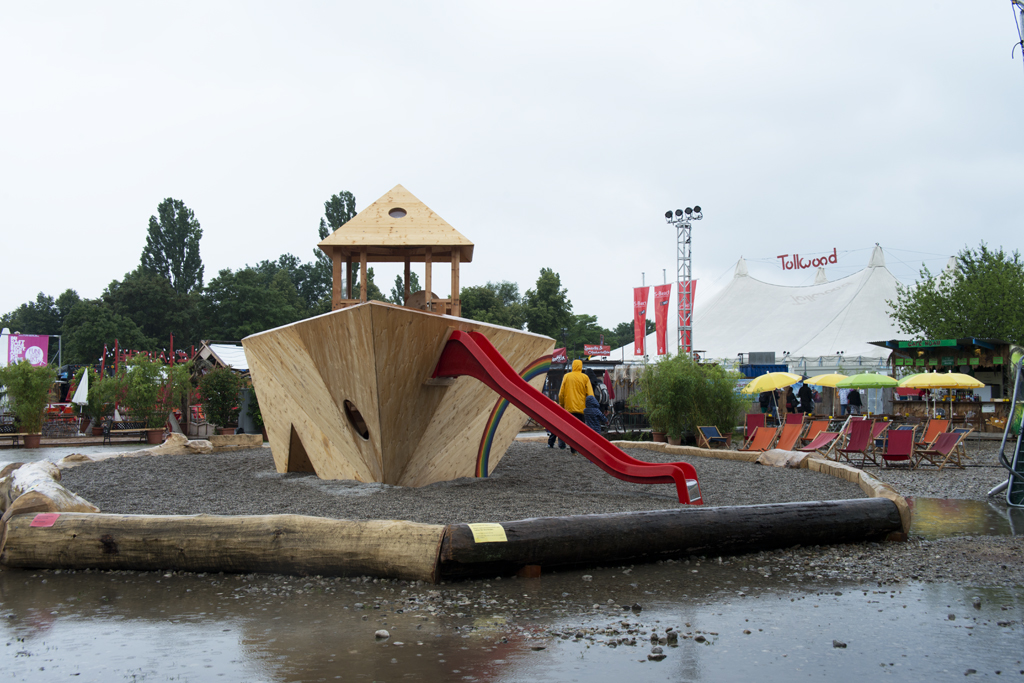 I love it that the umbrellas on this patio look like those little ones you get in drinks! 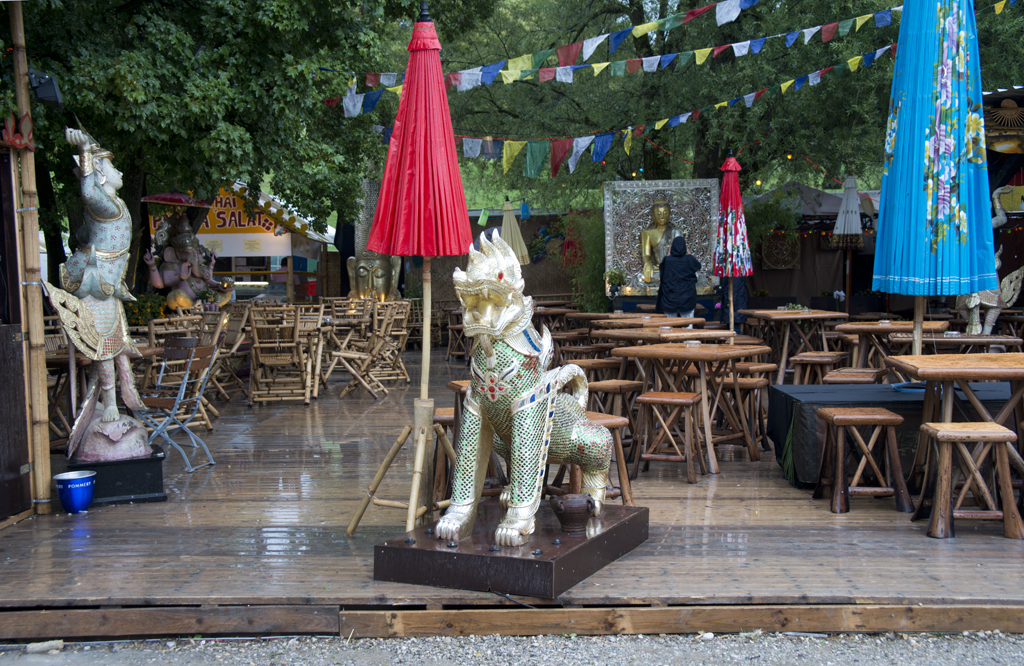 My husband and I took refuge in a tent and waited some of the rain out: 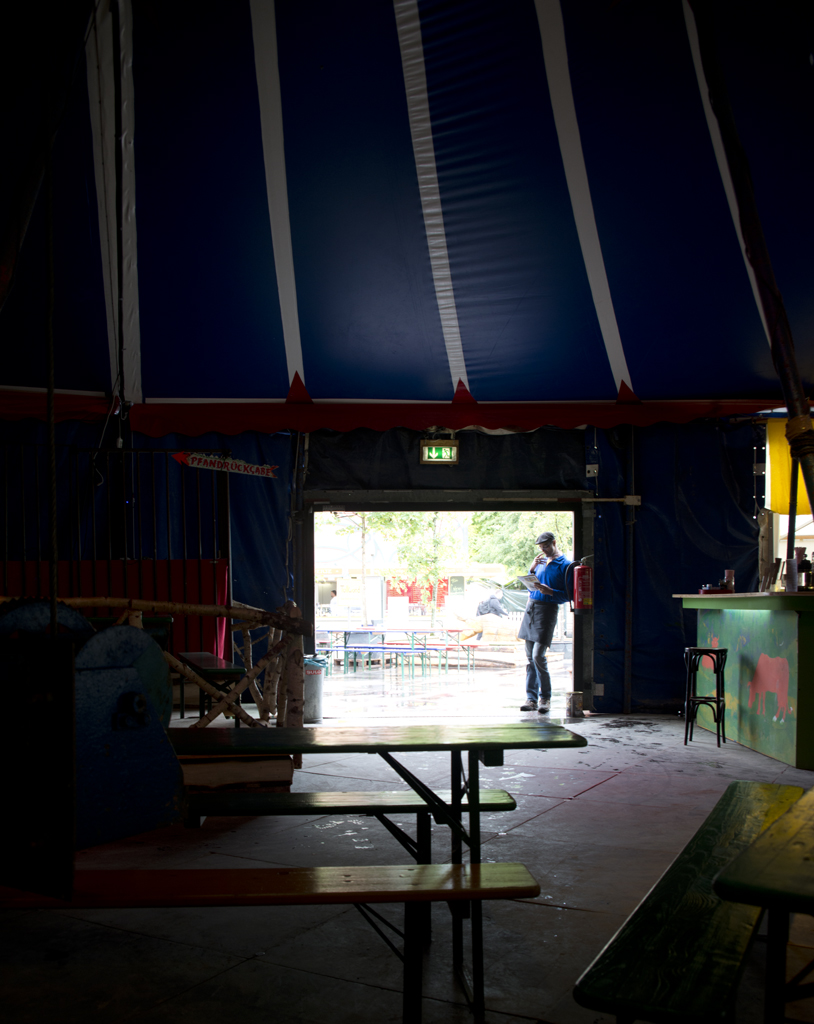 Even the tent had funky little animals on its poles: 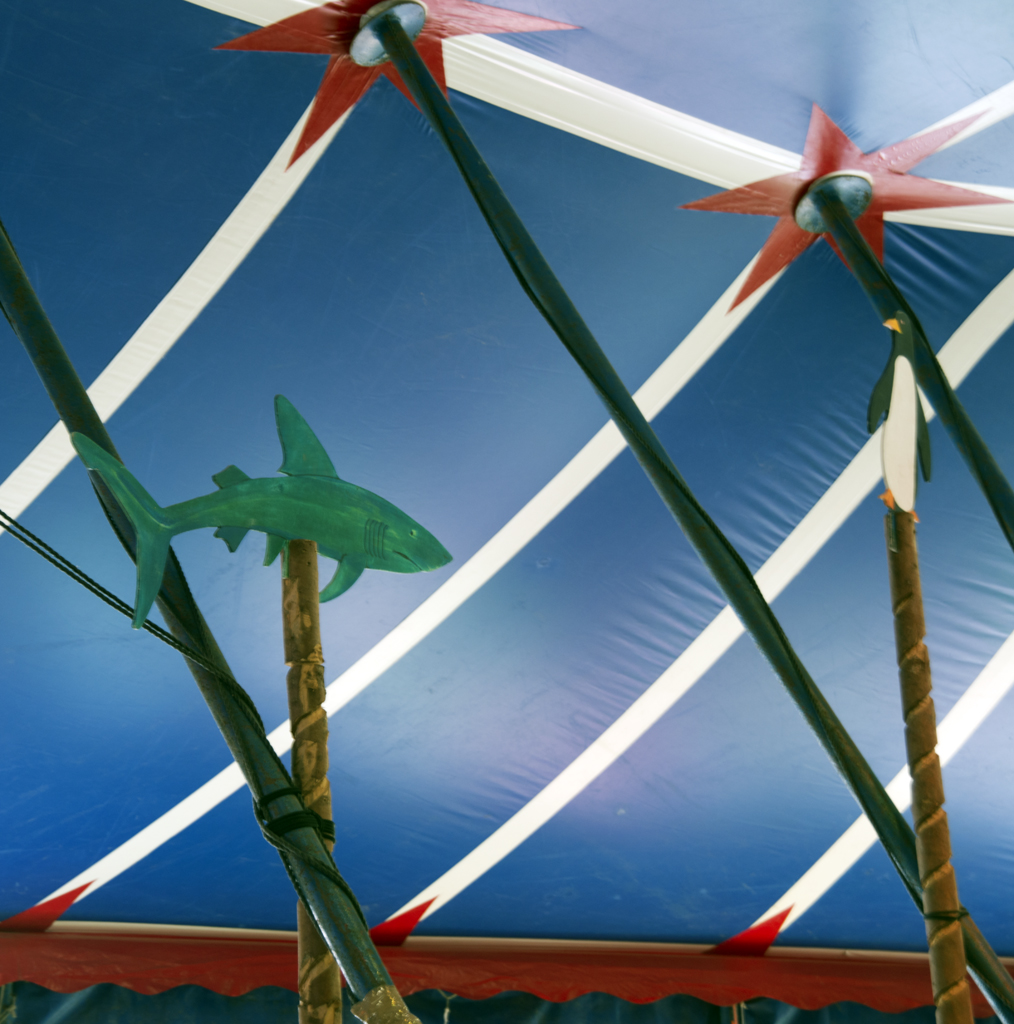 The last time I visited Tollwood was also at a summer fest, but we were too early for anything to be happening because we were actually on our way to a place just outside the festival grounds. But the weather was great and I got some pretty good photos of the area without the crowds.

You can see some of the art installations make repeat appearances: 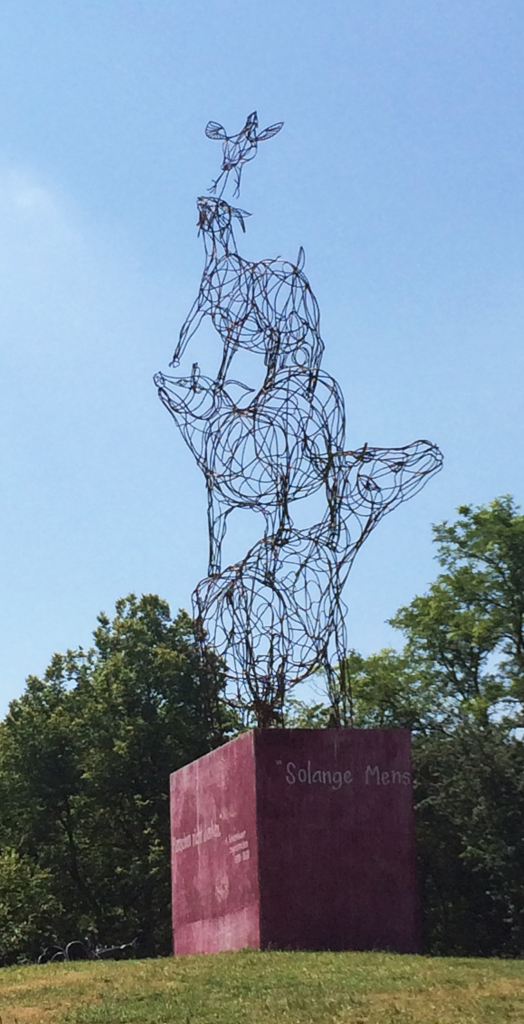 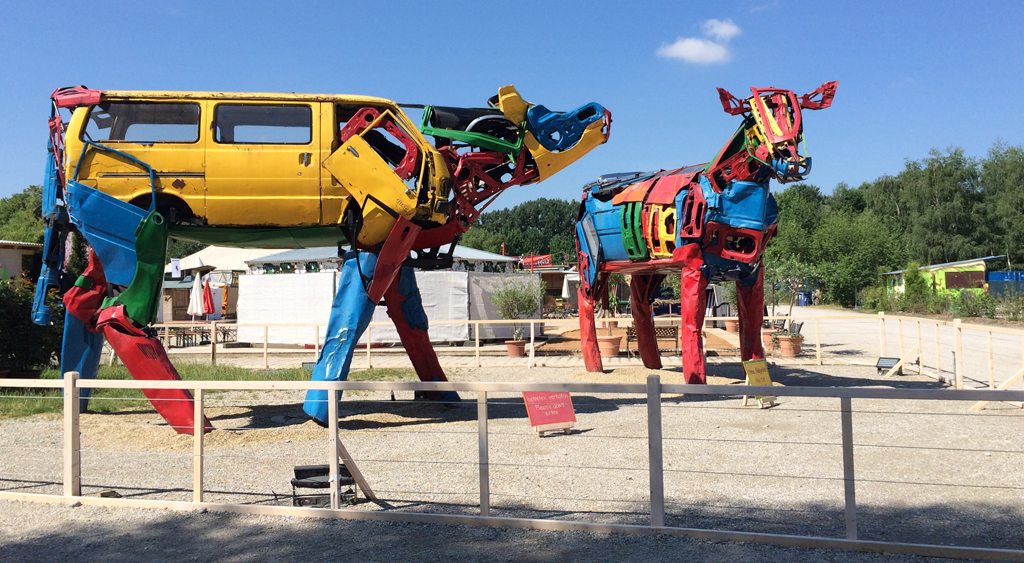 There are crazy wood carvings welcoming traffic into the festival – or are they hitchhiking? 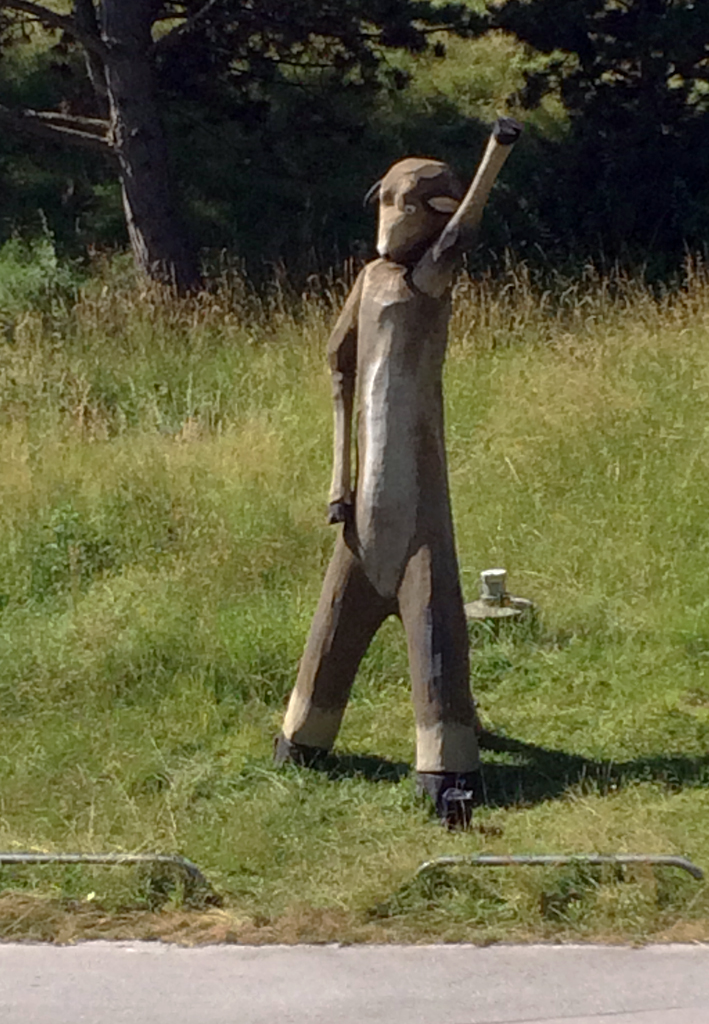 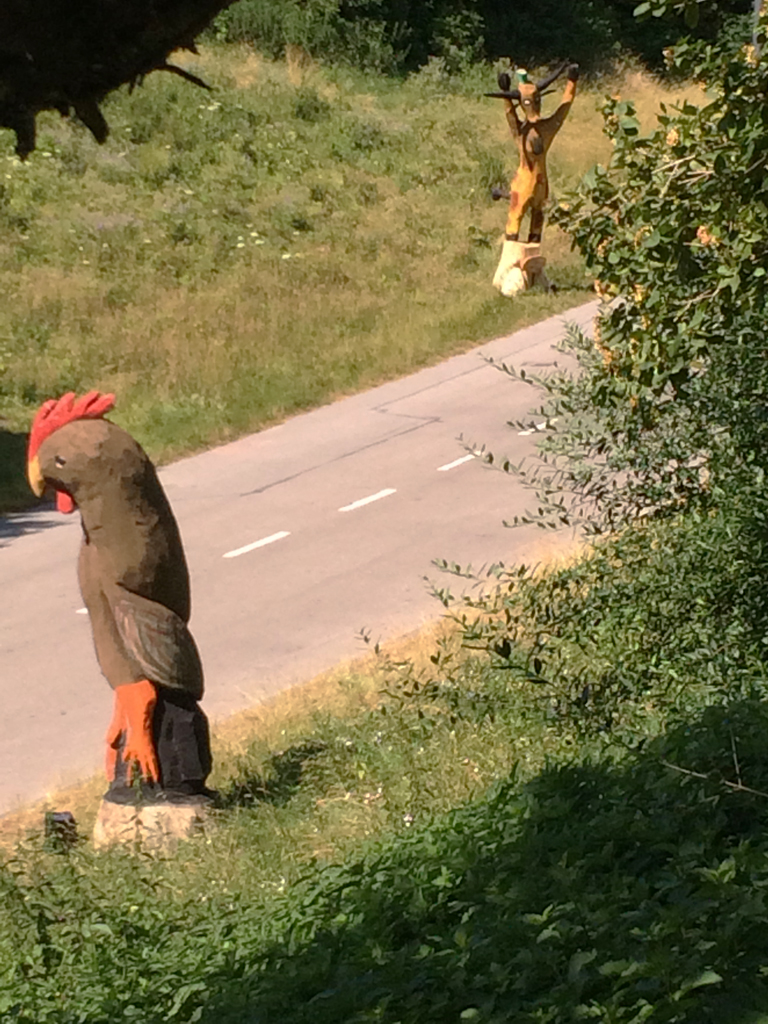 As you can imagine, Tollwood as an organization collects many accolades, awards and honors from numerous organizations for their ecological, green, animal welfare projects and consciousness-raising. The whole situation demonstrates the German dedication to preserving our environment and cultures. Plus it’s a whole lotta fun! If you’re ever in Munich in July or December, you must definitely visit the fest! 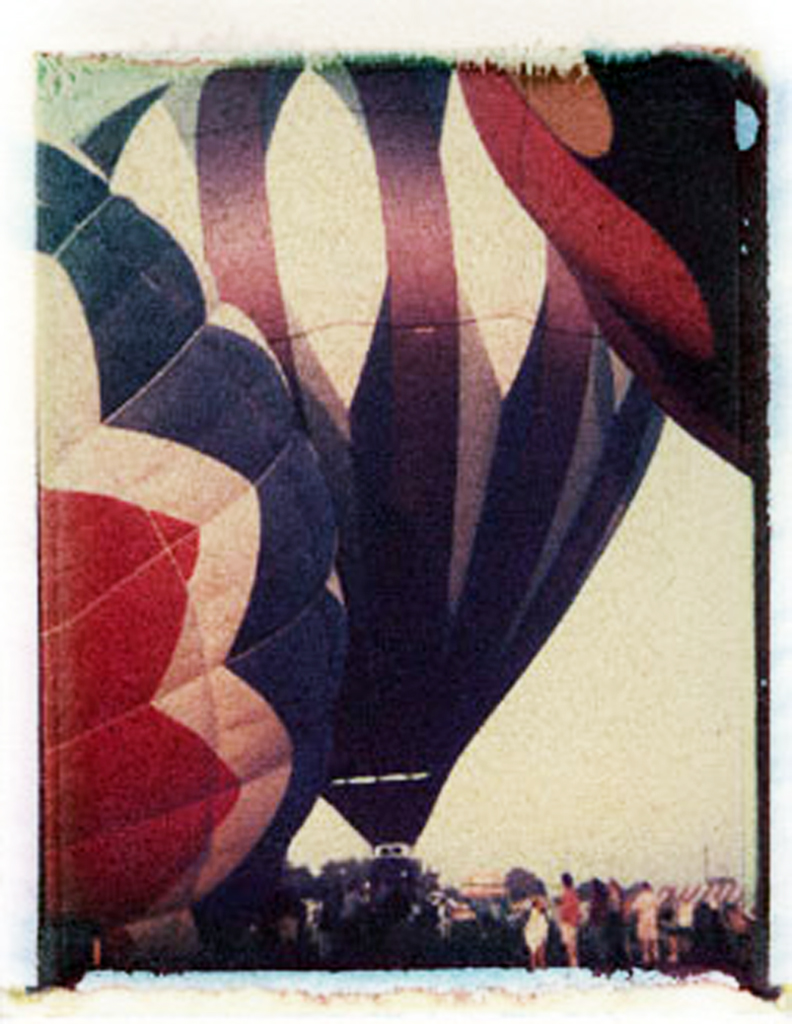