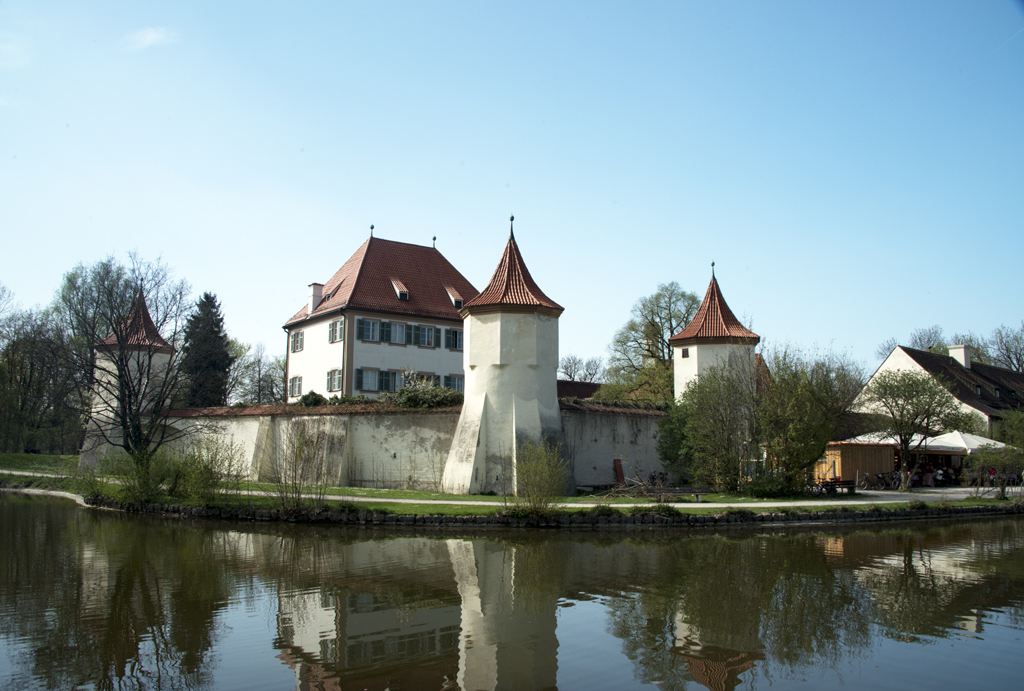 Shop all my books – holidays are coming and you’ll need gifts!

This week I bring you another flashback to Germany, Blutenburg Castle. It’s a little ways west of Nymphenburg Palace, which is the well-known one where “Mad” King Ludwig II was born. Blutenburg, however, was a ducal estate (for dukes and duchesses). The name means “blossom castle”, but I’m not sure it was originally intended to have flowers in the name. It evolved from “Pleudenburg” and I don’t even know what that might mean in old German!

I indirectly referred to Blutenburg back in April of 2015: the Photo for No Apparent Reason was a picture from a sculpture on the castle grounds. If you want more info, you’ll have to buy my PFNAR 2015 book and look it up!

The PFNAR was a detail on the back of this sculpture called “Monument to Love” by Joseph Michael Neustifter: 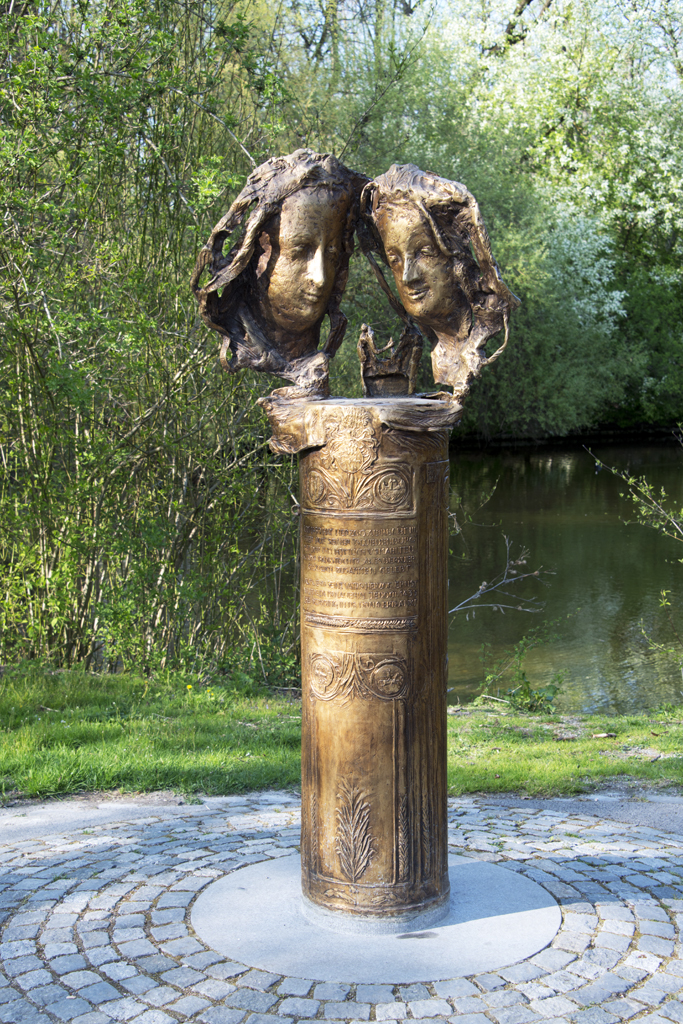 The lovey-dovey couple is Bavaria’s Duke Albrecht III and his wife, Agnes Bernauer. She was a commoner whom Albrecht met in the public baths in town in 1428. Albrecht’s dad had a fit about the relationship and forbid them to be together.

They secretly married (or not, according to some accounts) and Albrecht built the current castle here in 1430 as a “hunting lodge”. But really it was for Agnes – their love nest, so to speak – and helped hide Agnes away from the family. When dad eventually discovered what was going on, the scoundrel had Agnes drowned in the swift Würm River nearby when hubby was off hunting in 1435. We hate that guy!

You can see part of the river in the background, which loops around the property and serves as a moat. There’s a nice pond in front (see above) and lots of open space where people like to sunbathe on nice days.

There’s another downer sculpture on the grounds in front: 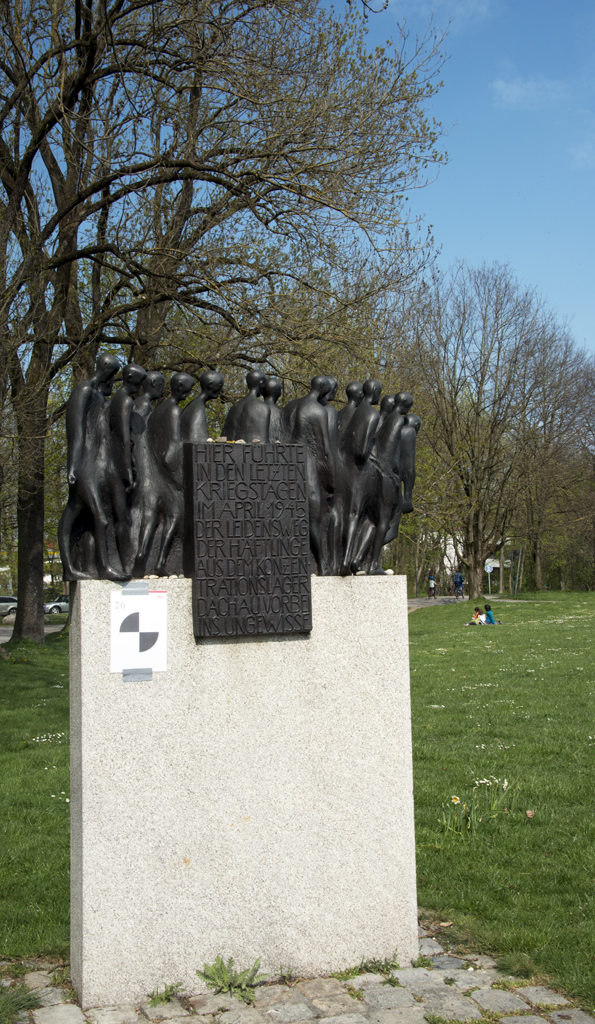 The inscription says it all: “Here, in the last days of the war in April 1945, the path of suffering for the prisoners from the Dachau concentration camp passed into the unknown.” It’s a memorial to the Dachau prisoners who were marched through here during that time.

But the castle isn’t all doom and gloom! It’s quite old, as I said, built in 1430. However, there had been an earlier moated castle on the site starting in the 13th century. That one burned during a previous war. Crazy old! For that matter, the small town of Menzing, in which Blutenburg resides, is celebrating its 1200-year anniversary this year.

Albrecht’s son, Sigismund, lived at Blutenburg and had the chapel added in 1488 or so. In the early 1600s, the Thirty Years’ War happened, during which the place was pretty much destroyed except for the chapel.

The castle was rebuilt in the 1680s, and the defensive character of the compound was minimized because there was no reason to defend it at that point. The place changed hands several times until an organization formed in the 1970s to bring it back to its historical form. It opened to the public in 1980.

Some of the defensive architecture remains, like this entry tower: 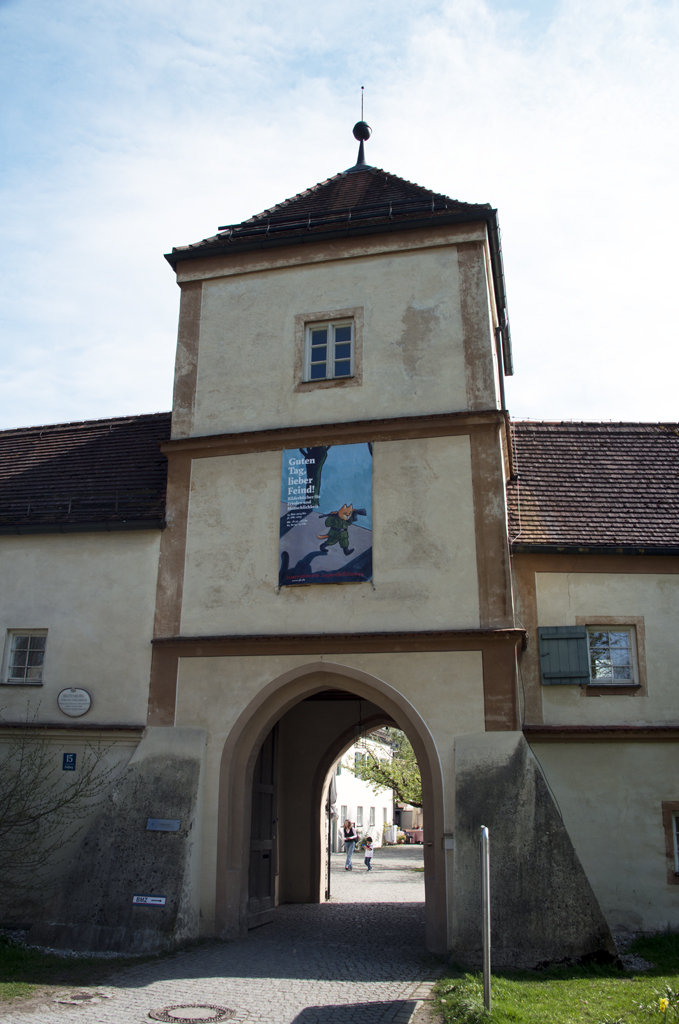 The poster on the tower says, “Good day, dear enemy!” It’s an ad for an exhibit of picture books for peace and humanity that was coming to the International Youth Library housed in part of the castle.

Inside is a nice, quiet courtyard: 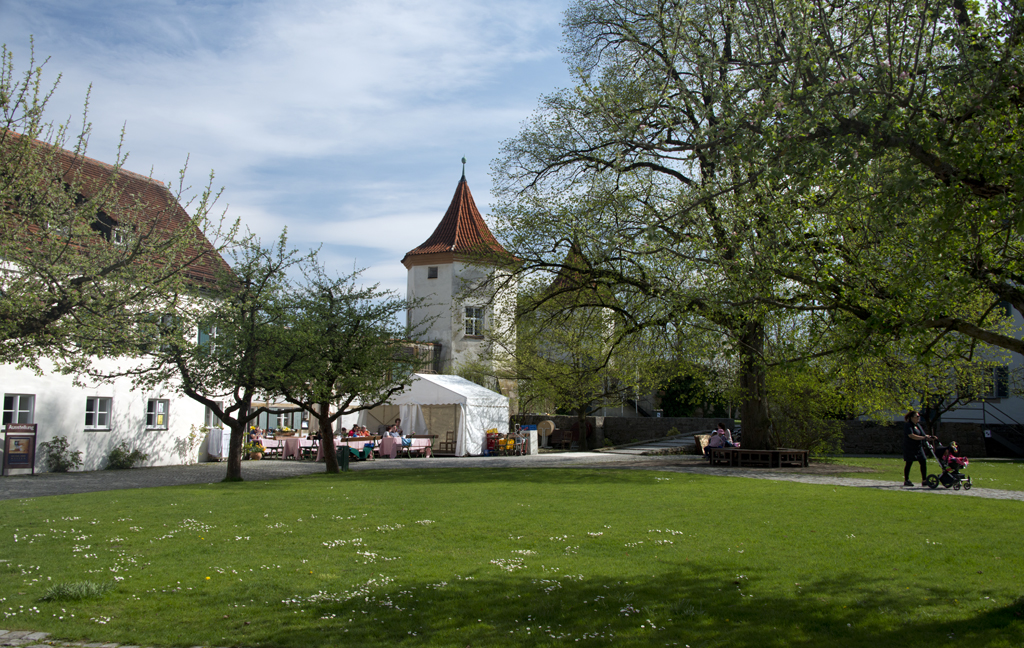 On the left is the Youth Library. Next to that you can see the courtyard tables of the Schlossschanke Blutenburg restaurant. The restaurant goes all the way through the building and has outdoor seating next to the pond in front. But more about that in a moment.

The courtyard is the sight of a well-known Christmas market and also of an annual concert series.

I mentioned the chapel above. Here it is from the inside courtyard: 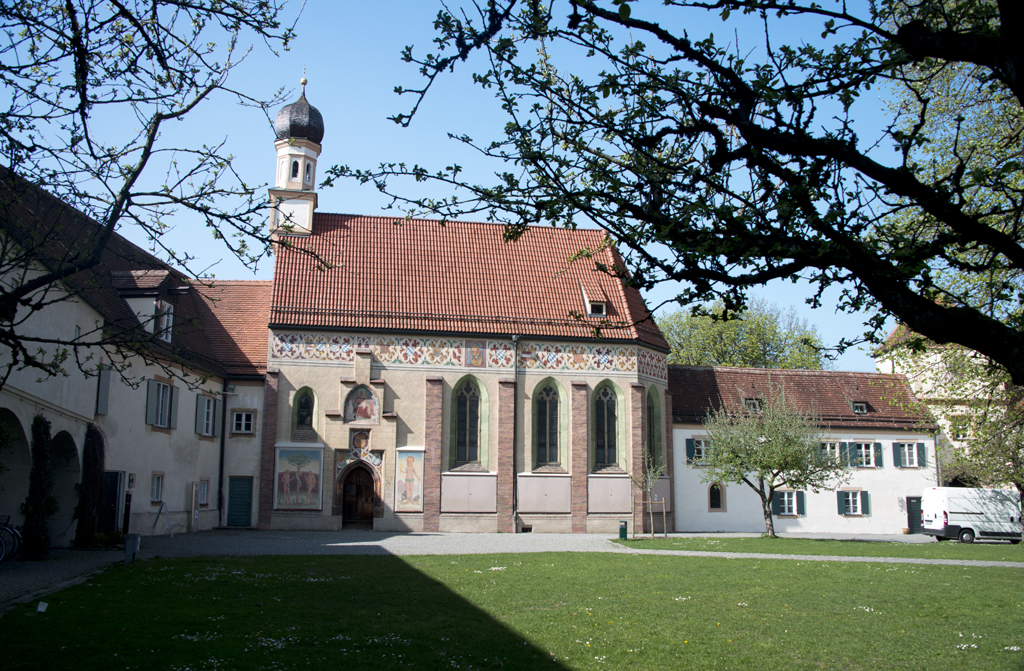 It’s considered a late-gothic masterpiece and its stained-glass windows are still intact. The murals on the outside have all been restored: 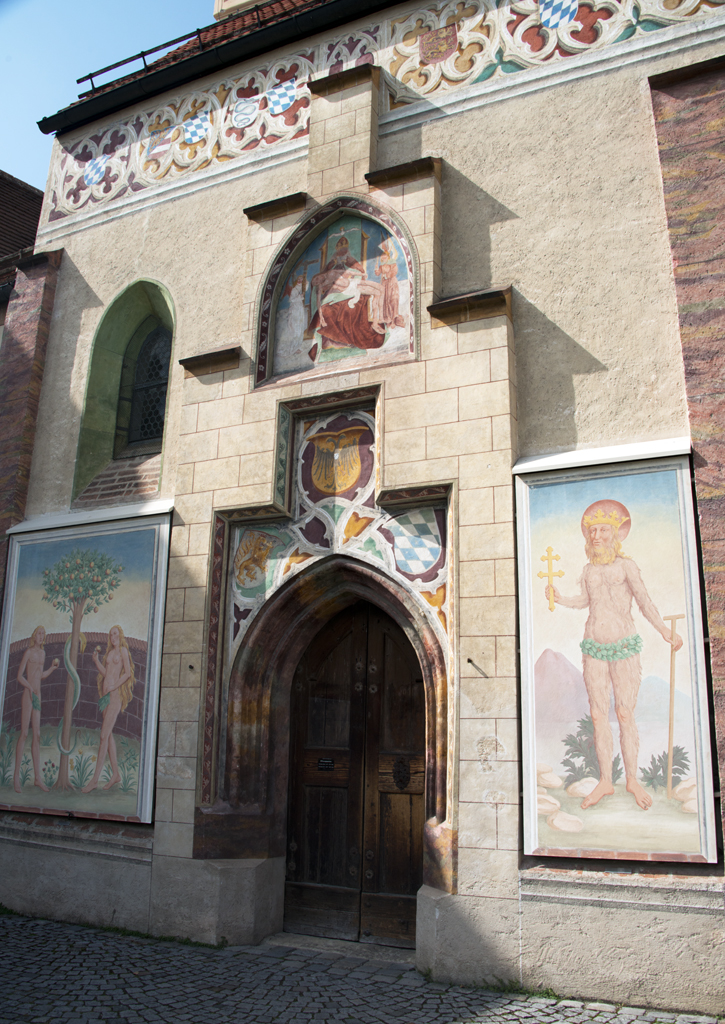 So has the interior: 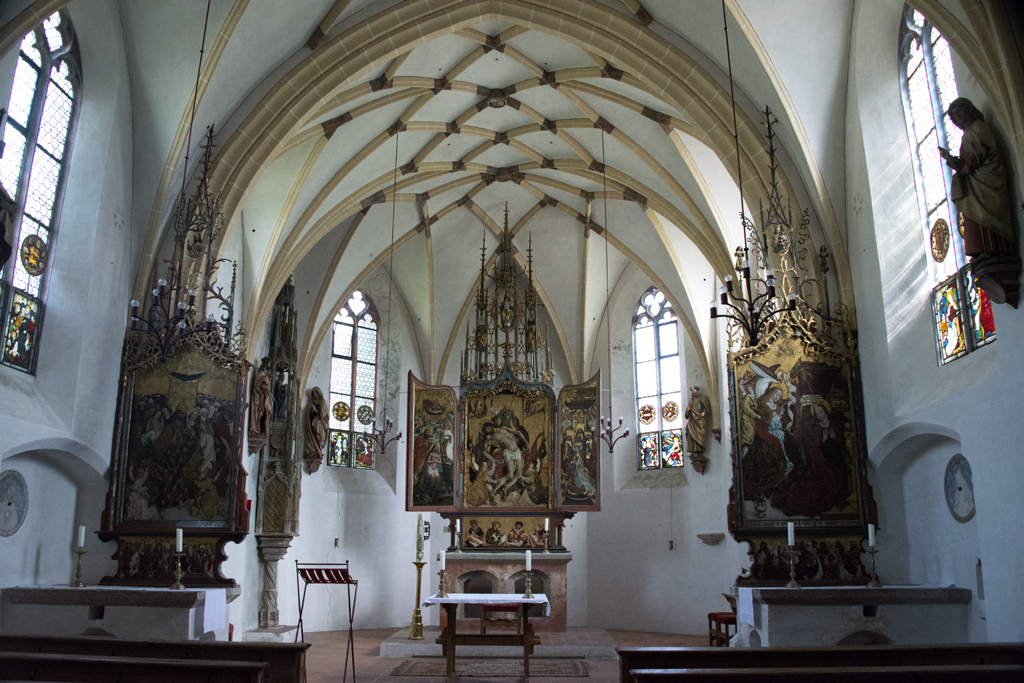 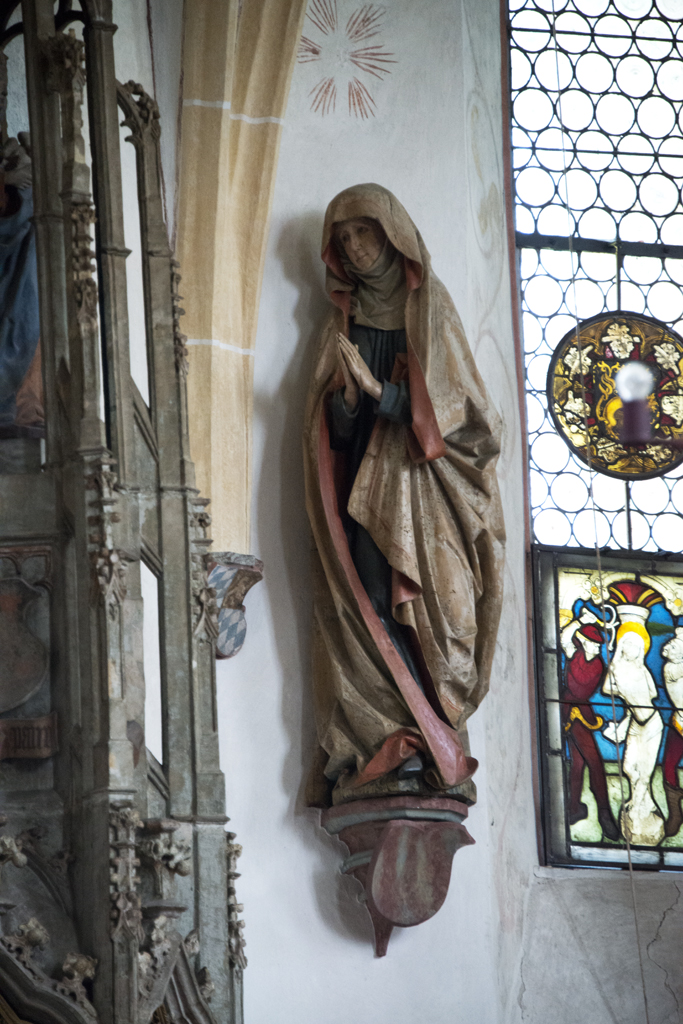 The murals on the wall are in the process of being restored, I think: 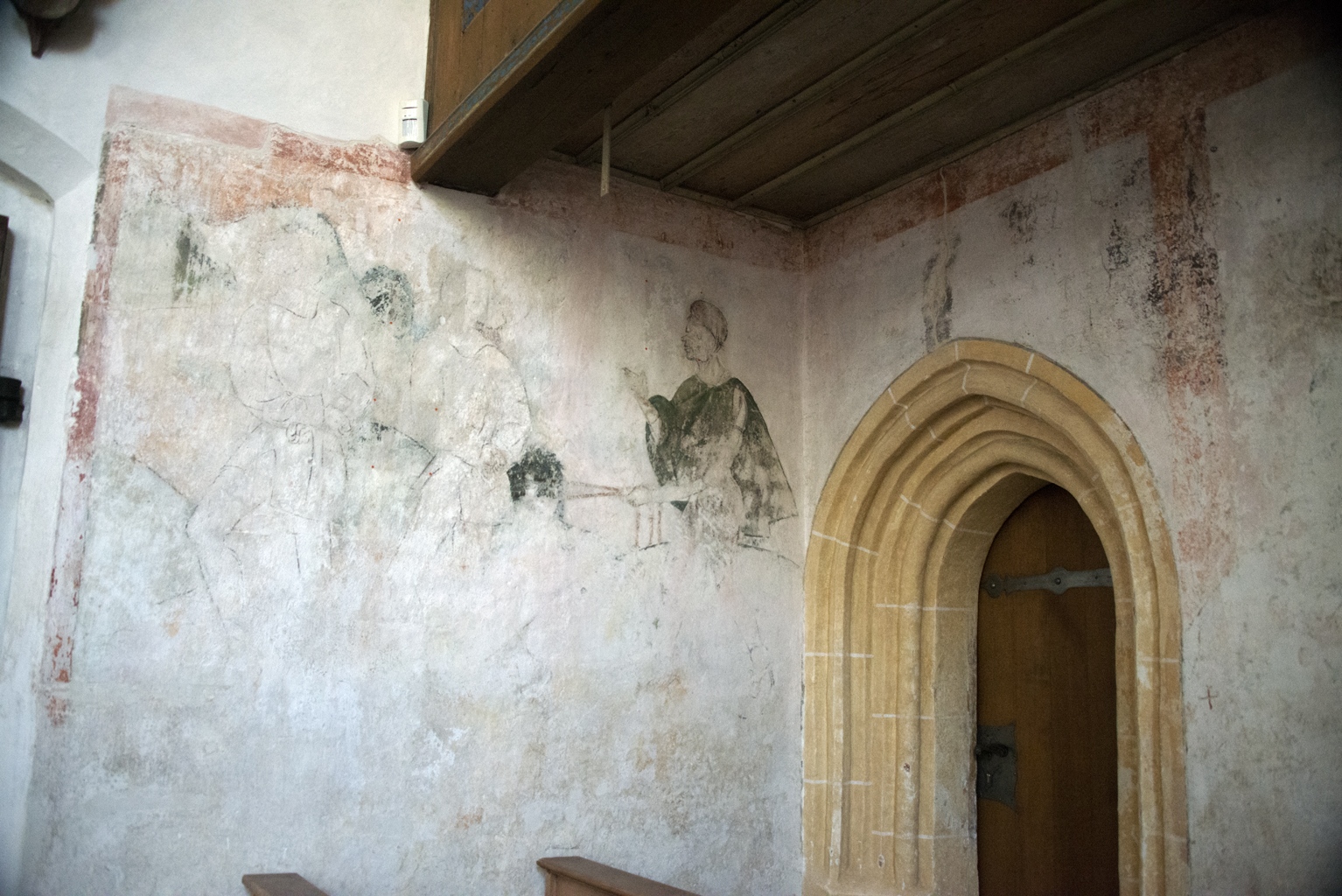 It amazes me I could walk right up to anything in there and photograph it to my heart’s content. No velvet ropes or anything!

Also accessible from the courtyard is the Youth Library, as I said. They had a couple of art exhibits going, which, unfortunately, I didn’t get to. However, here’s the poster for the permanent collection of Binette Schroeder, a German illustrator: 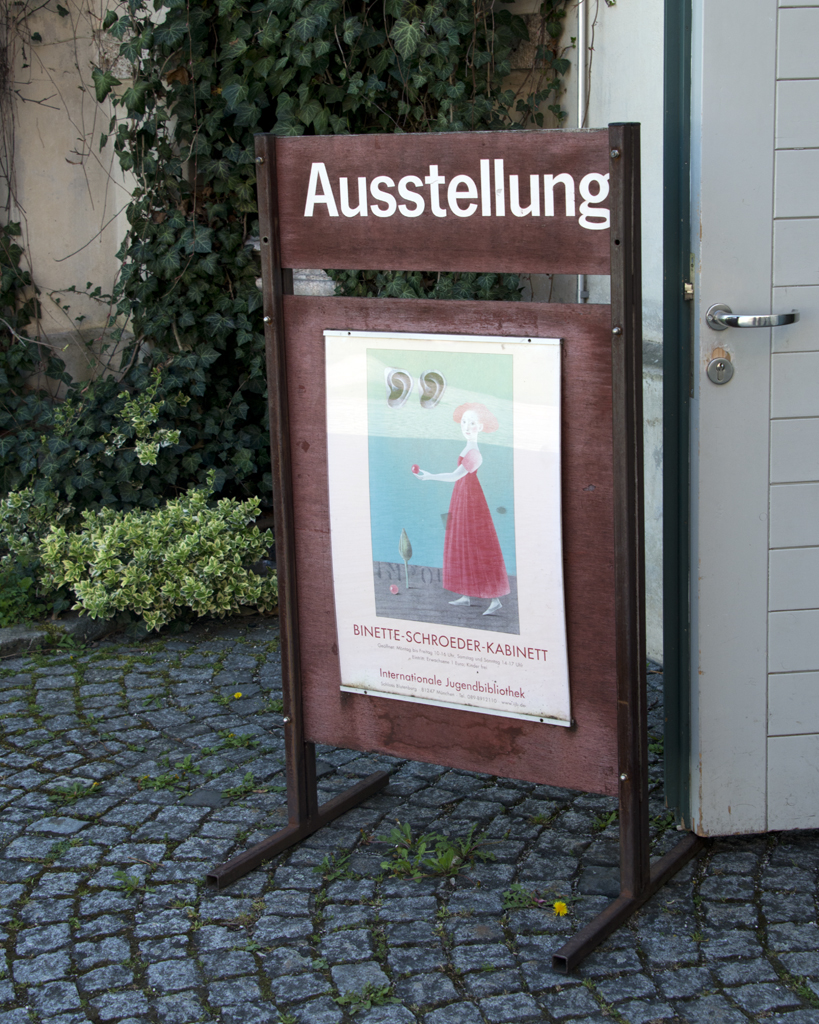 If I were you, I’d google her name and look at images – they are beautiful and fantastical! 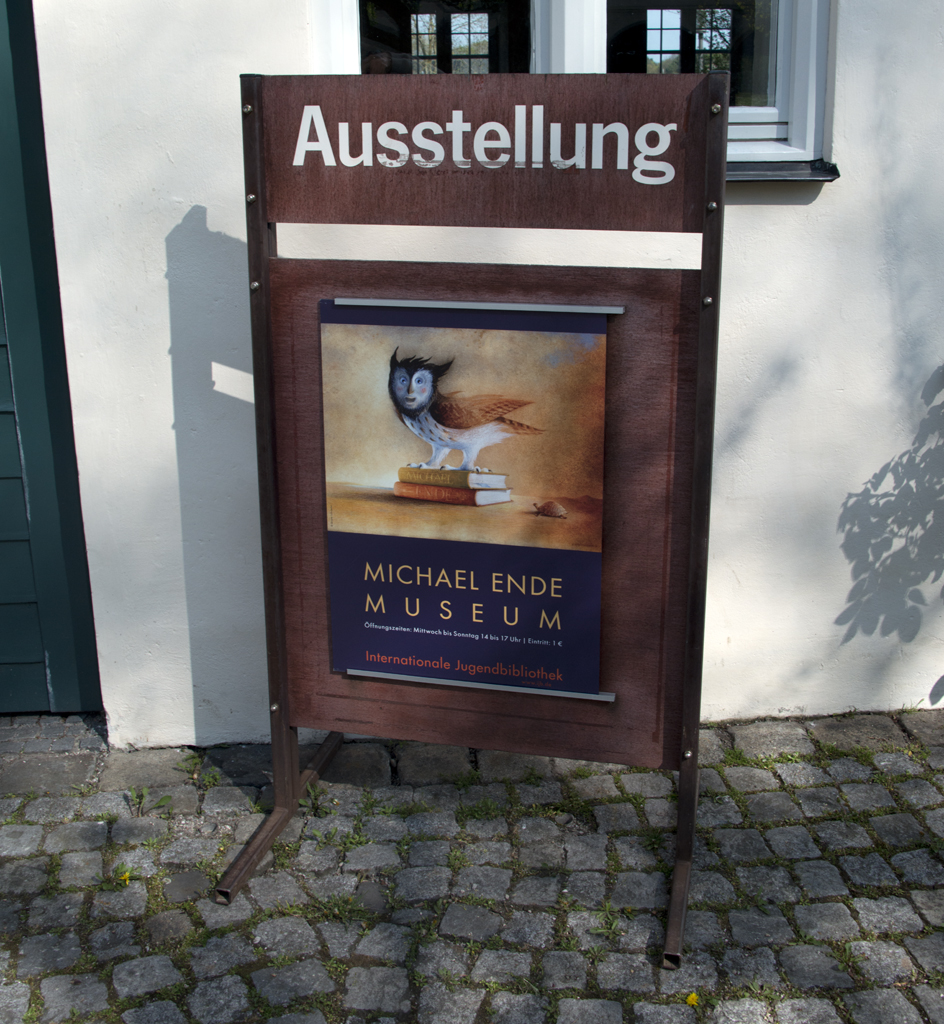 By far the most intriguing exhibit is one named “Wenn die Möpse Schnäpse Trinken“, which means “When pugs drink schnapps”, illustrations by James Krüss. 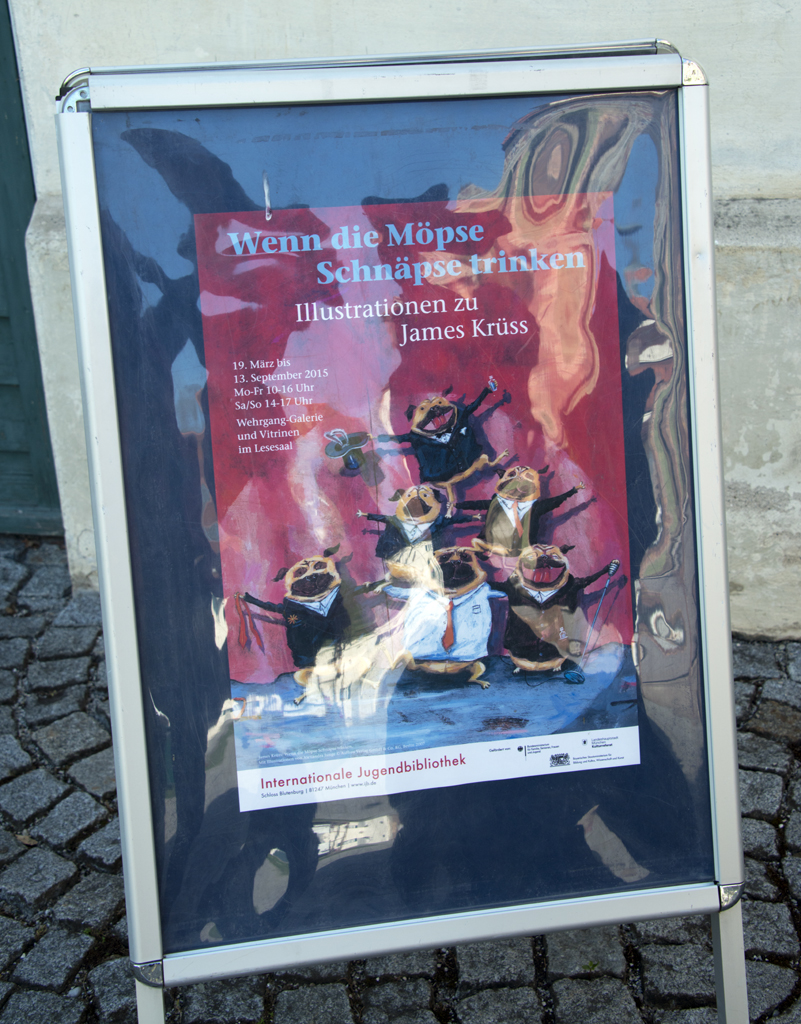 A little research revealed that this guy also wrote a children’s nonsense poem by that name, which is quite entertaining in German because each line has several words that rhyme within the line. But here’s the English translation:

When pugs drink schnapps,
When hedgehogs stand in front of mirrors,
When bears wave before pines,
When the oxen go boxing,

When sleeping sheep bubble,
When a whale appears in the valley,
When worms are plugged into worms,
When the titmouse cries softly,

When giraffes catch monkeys,
When a little mouse weighs lice,
When snakes hang on bars,
When the beaver gets fever,

a poem emerges,
But it is not useful!

The exhibit consisted of his illustrations of each of these lines for his book. Sorry I missed that!

I mentioned the restaurant that goes all the way through the building to the pond out front. Here’s the view from my table and a silhouette of my beautiful husband: 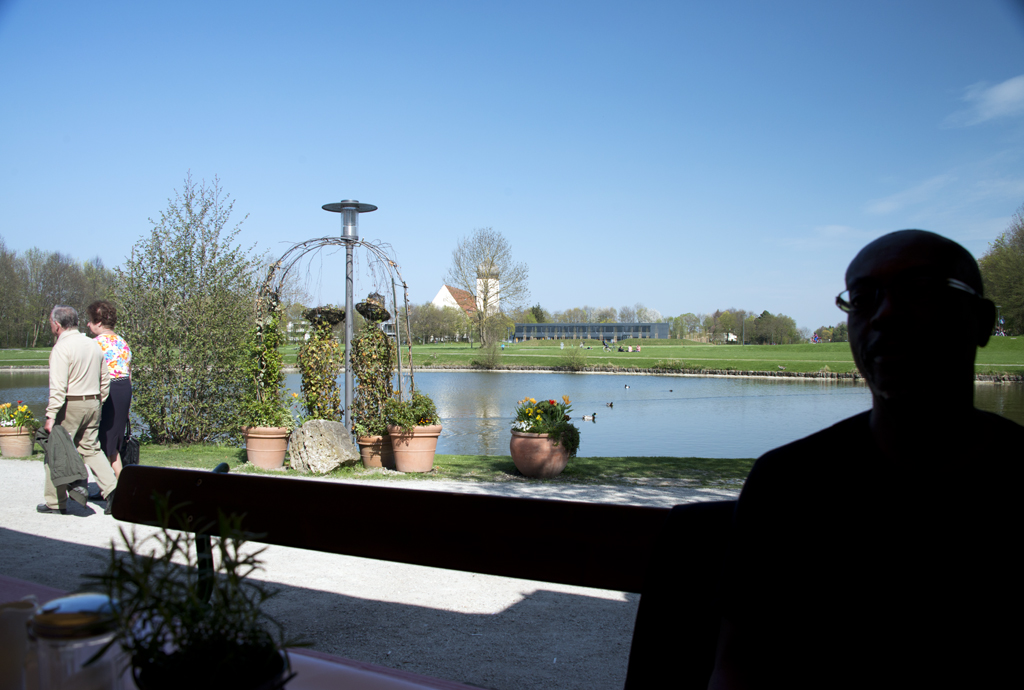 I don’t remember exactly what I had there, but I remember it was pretty good. The weather was stunning and I would just give anything to visit there again! I highly recommend it! 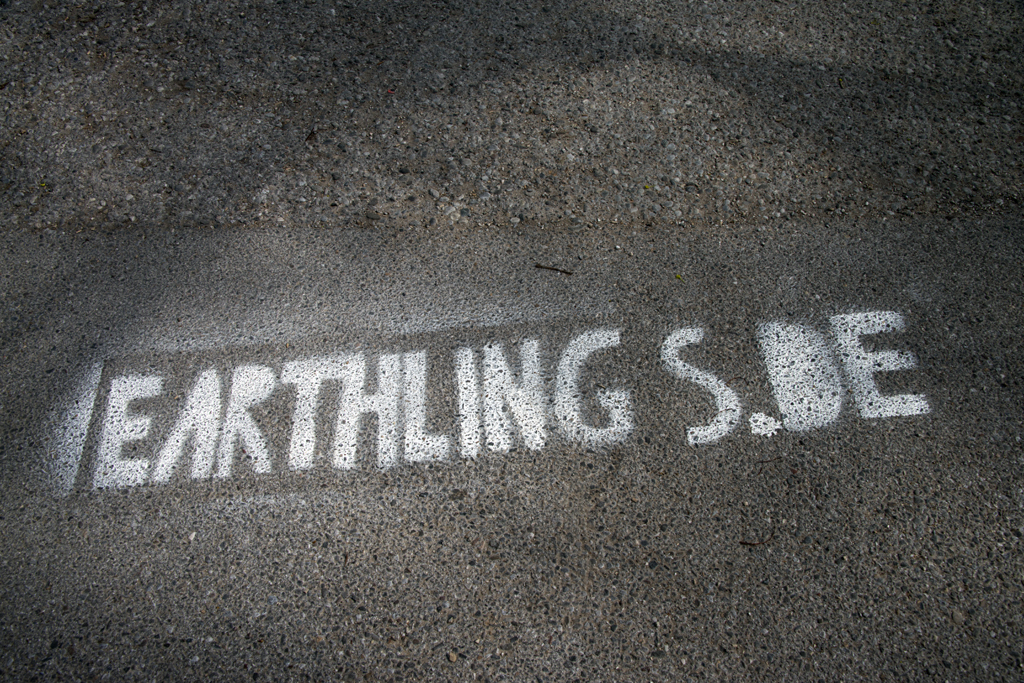