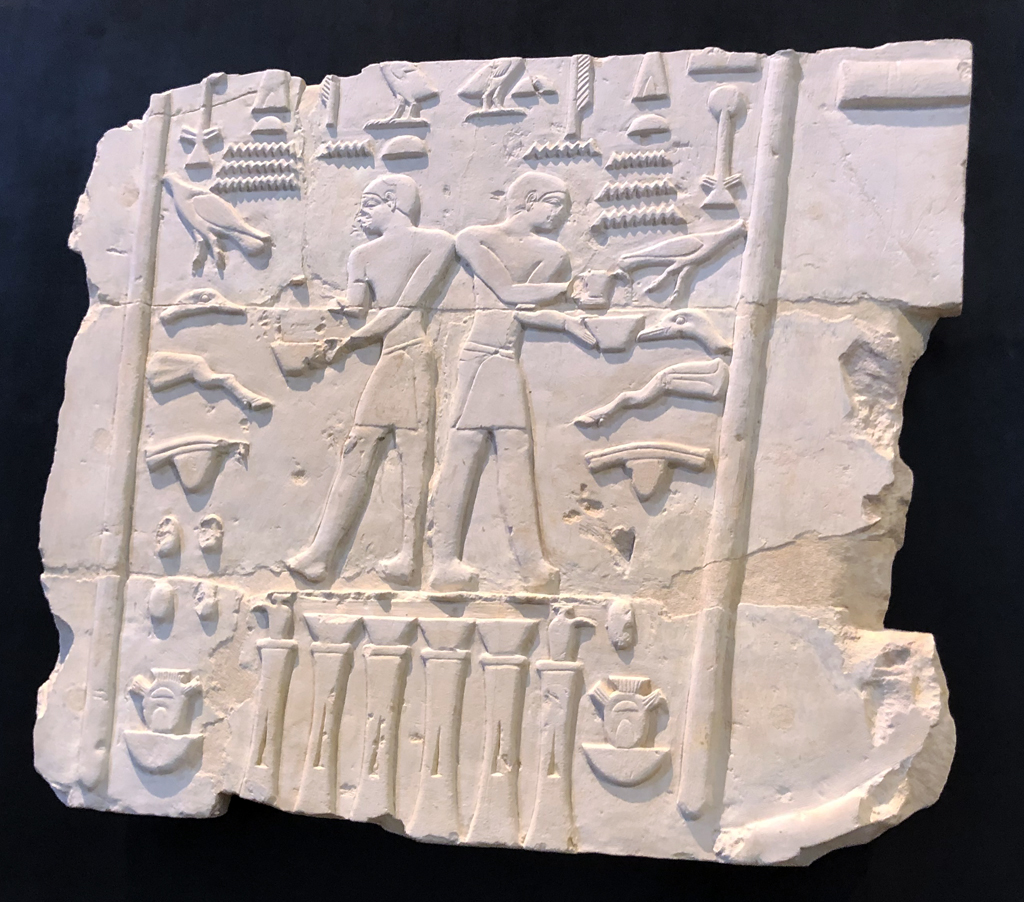 Recently I took a two-week trip to Germany, which was pretty short notice because of a death in the family of our close friends there. So the focus wasn’t on the travel this time. However, while there, I had a recommendation from a friend to see the newest museum in Munich: Staatliches Museum Ägyptischer Kunst (State Museum for Egyptian Art), which opened in 2013. It’s acronym in German is SMÄK, and you gotta love that.

On a day when the rest of the population had work and other activities, I set out to visit this place. It’s in the museum quarter, in the same area as the Pinakotheke, Lenbachhaus and other museums. 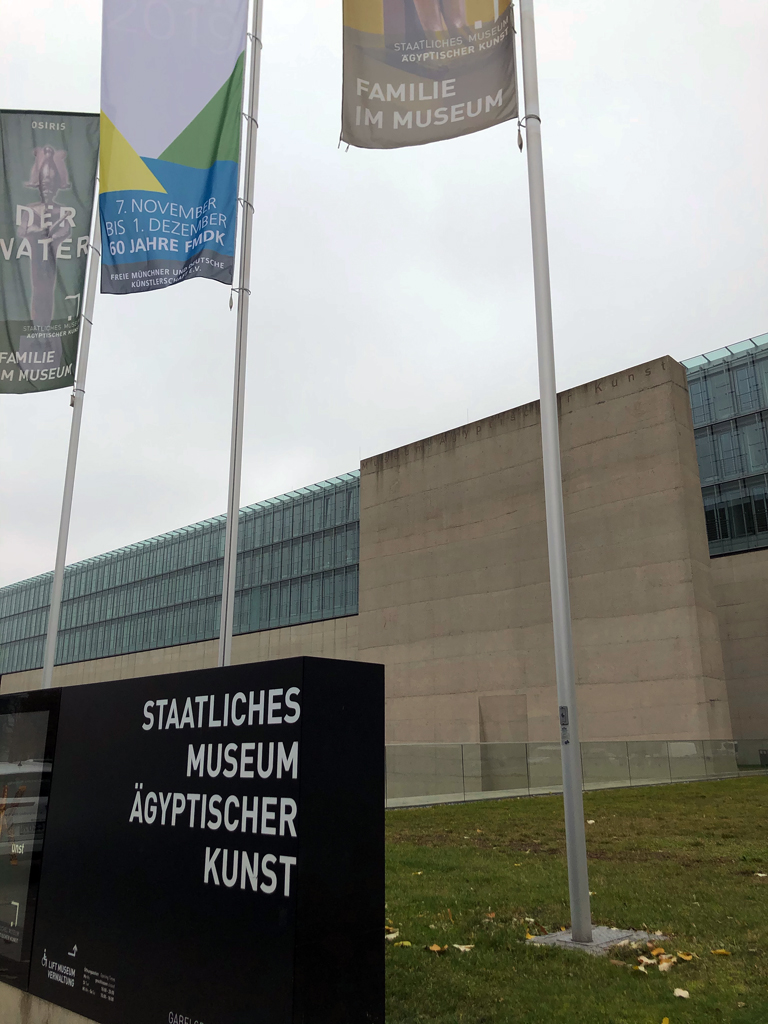 On the way over, I kept wondering how they could fit an entirely new museum into this already built-up area. I got my answer when I saw that they had built it underground! It is actually under the Munich TV and Film University. 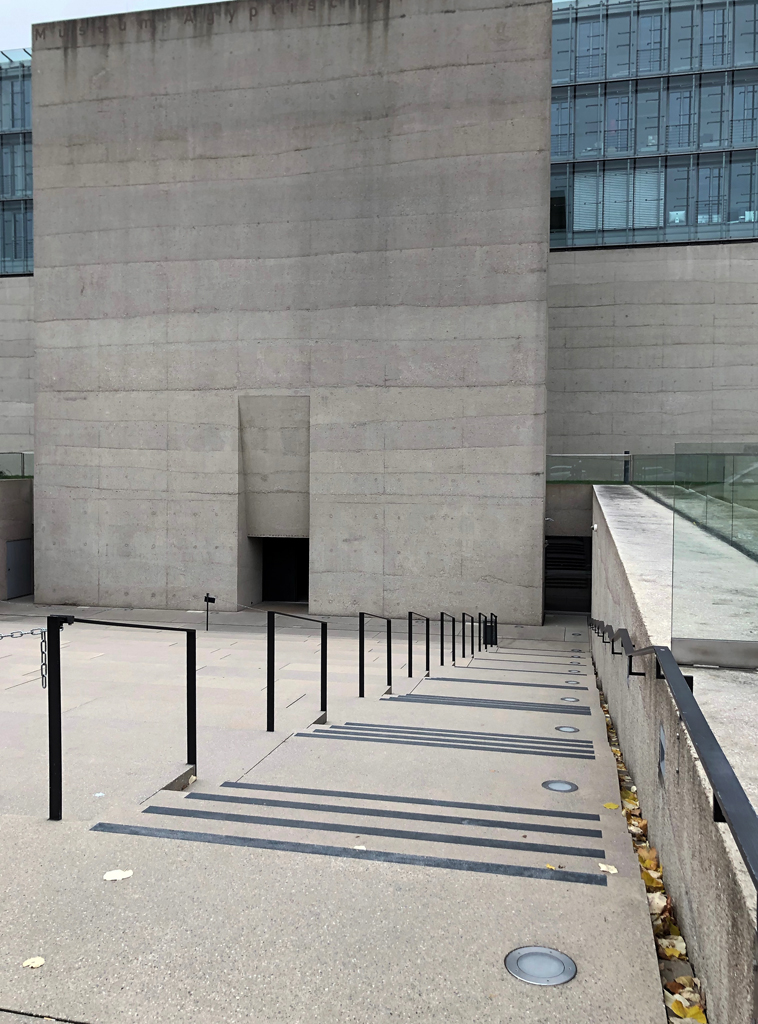 As my friend observed, it’s kind of like descending into an Egyptian tomb. In a good way, though. In the foyer is the ticket desk, cafe, gift shop and cloak room. The ticket man was surprised when I told him I was from Colorado; he said my German was very good and proceeded to give me the introductory spiel in German, most of which I actually understood. It was great to know I hadn’t lost much of it in the four years since I’d lived there.

Inside, the museum is all glass, metal and stone – very modern. Yet the lighting and arrangement of artifacts has an ancient feel as well. It has a lot of natural light, too, considering it’s underground. Here’s the grand staircase that is the entryway to the exhibits: 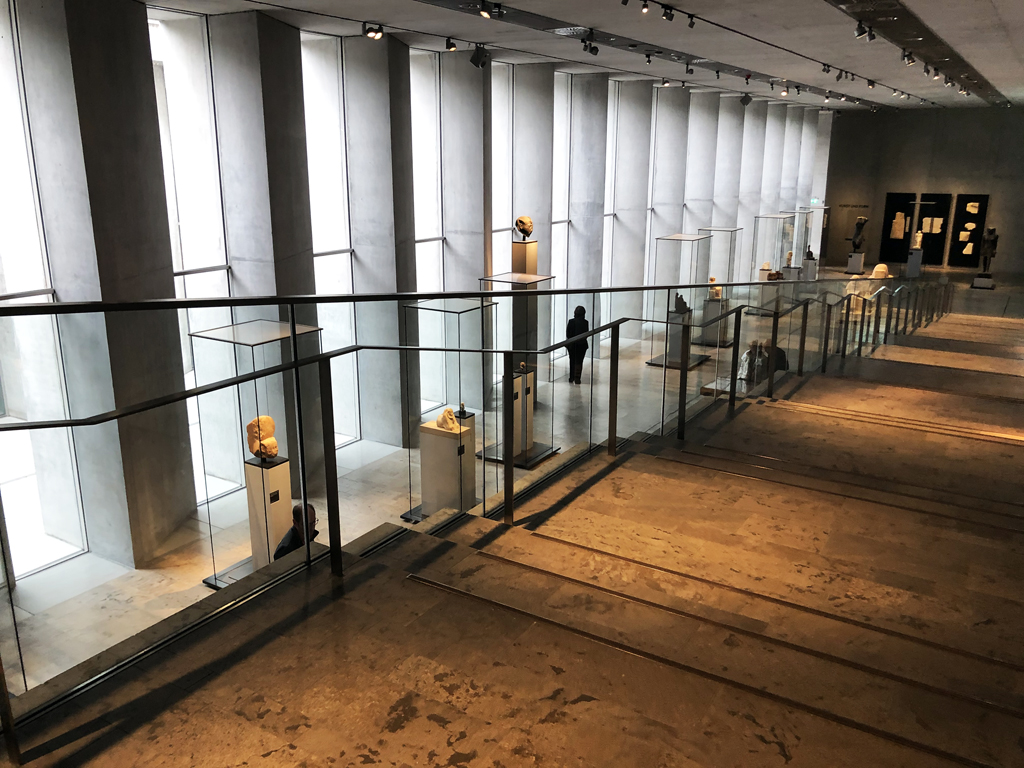 Of course, there was no shortage of relief sculptures… 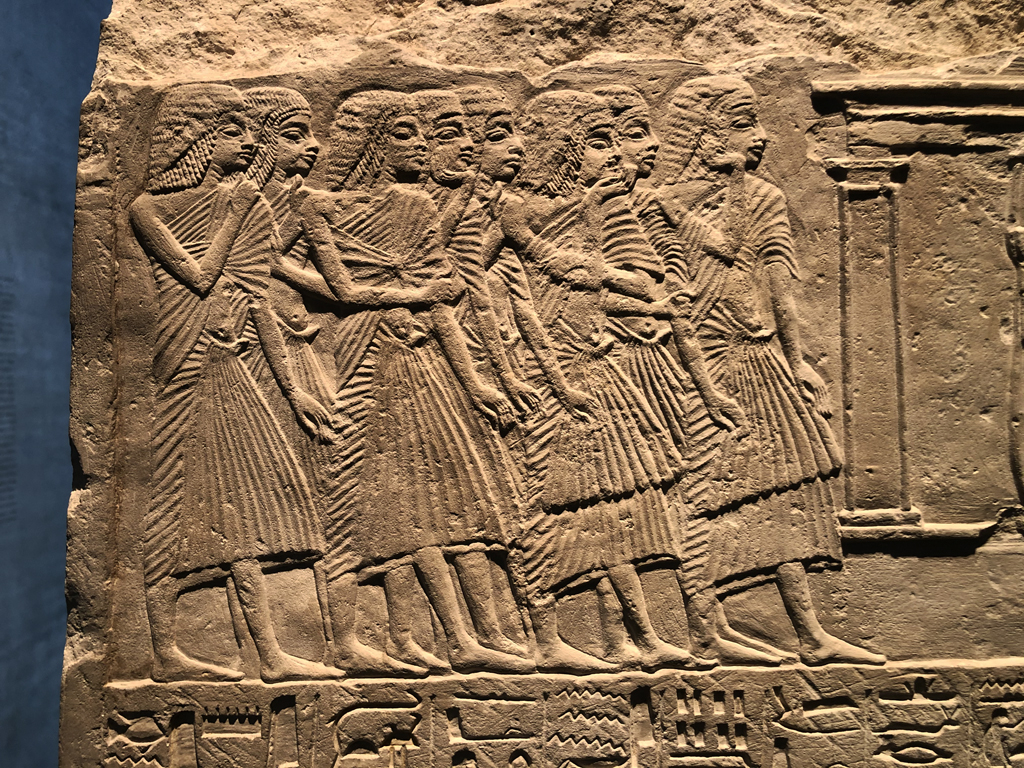 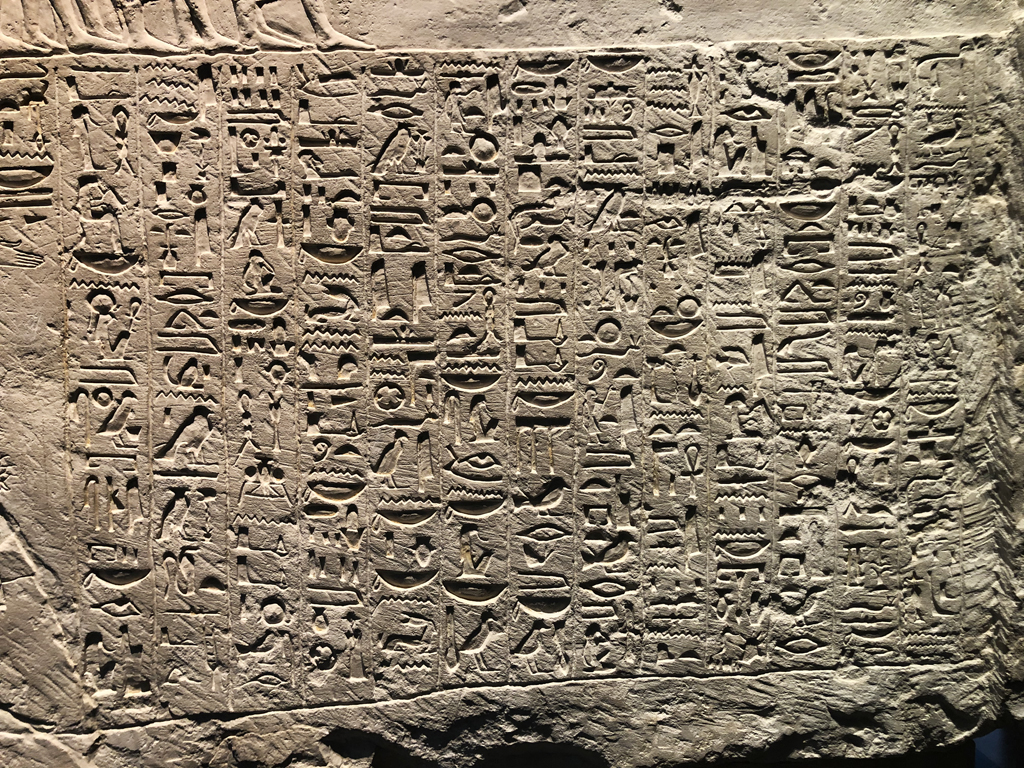 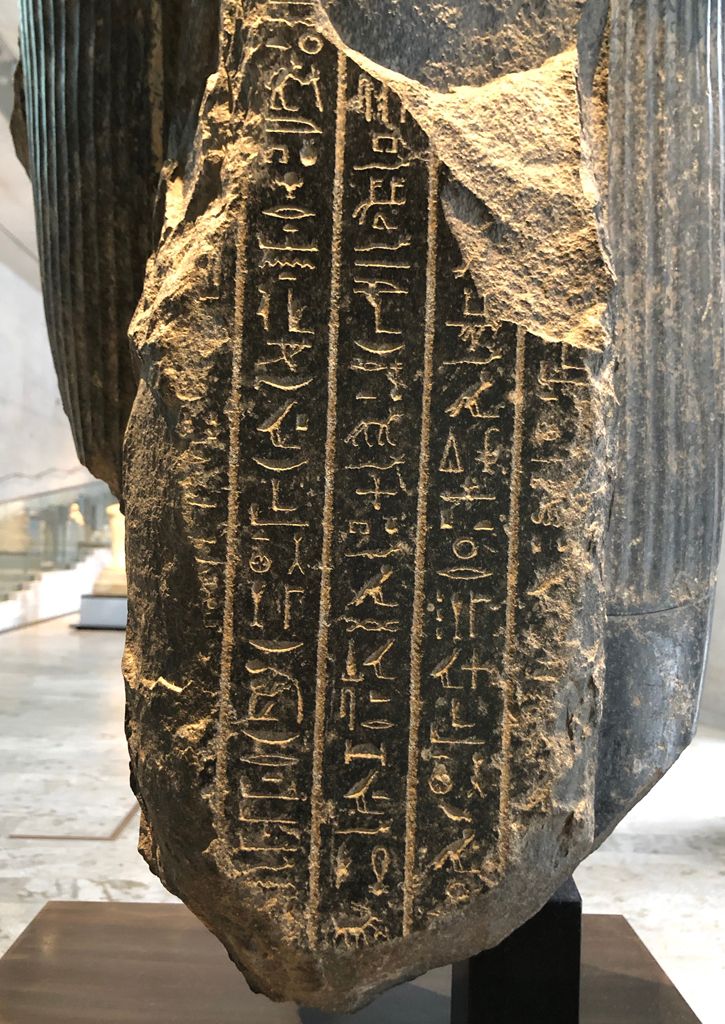 Such things are often found on a stela, which is a commemorative stone slab or pillar such as this Stela of Sobeki: 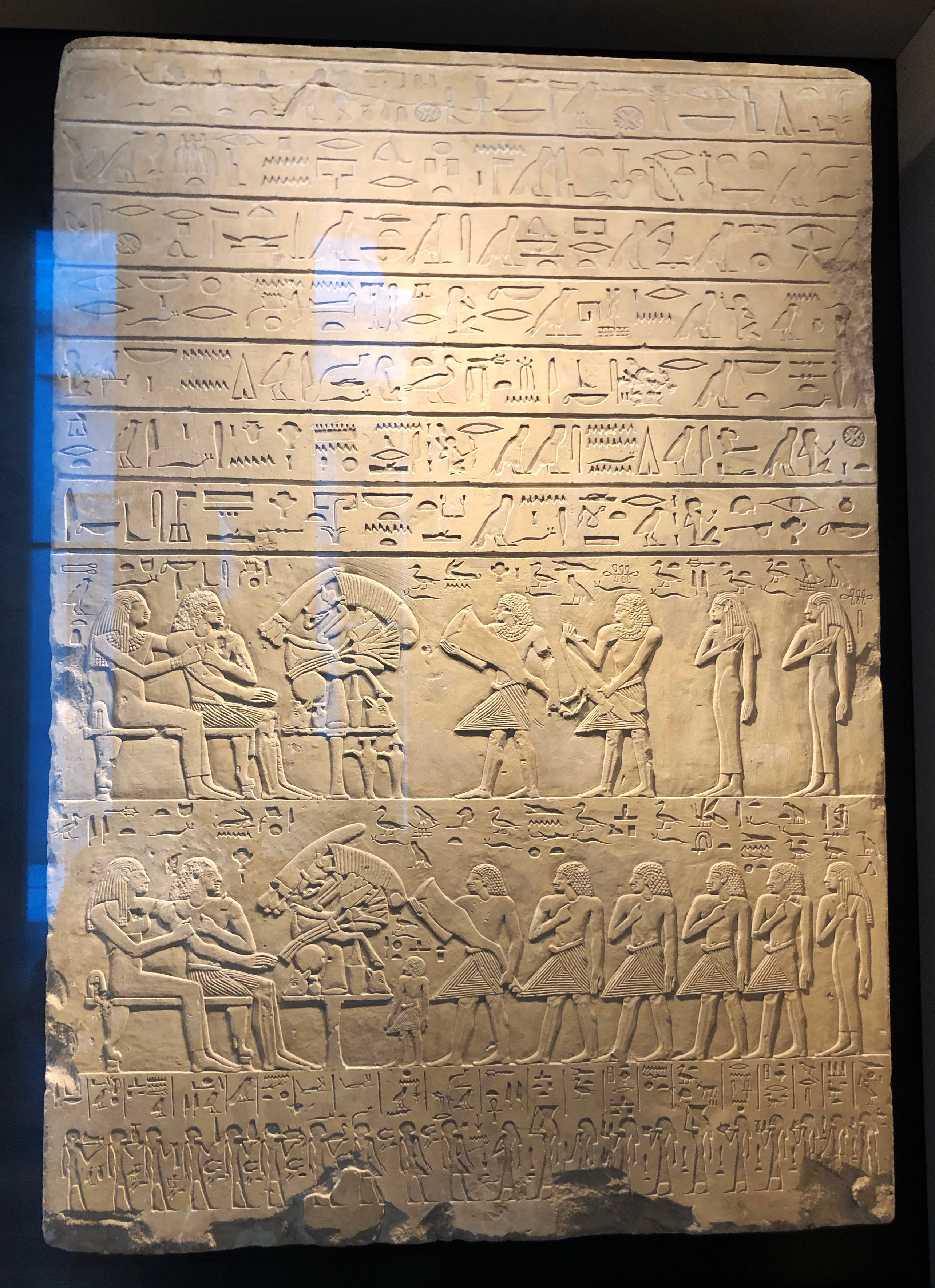 I’m always impressed that Germans manage to preserve very old things right alongside cutting-edge new ones, and this neon sign amidst ancient artifacts was no exception: 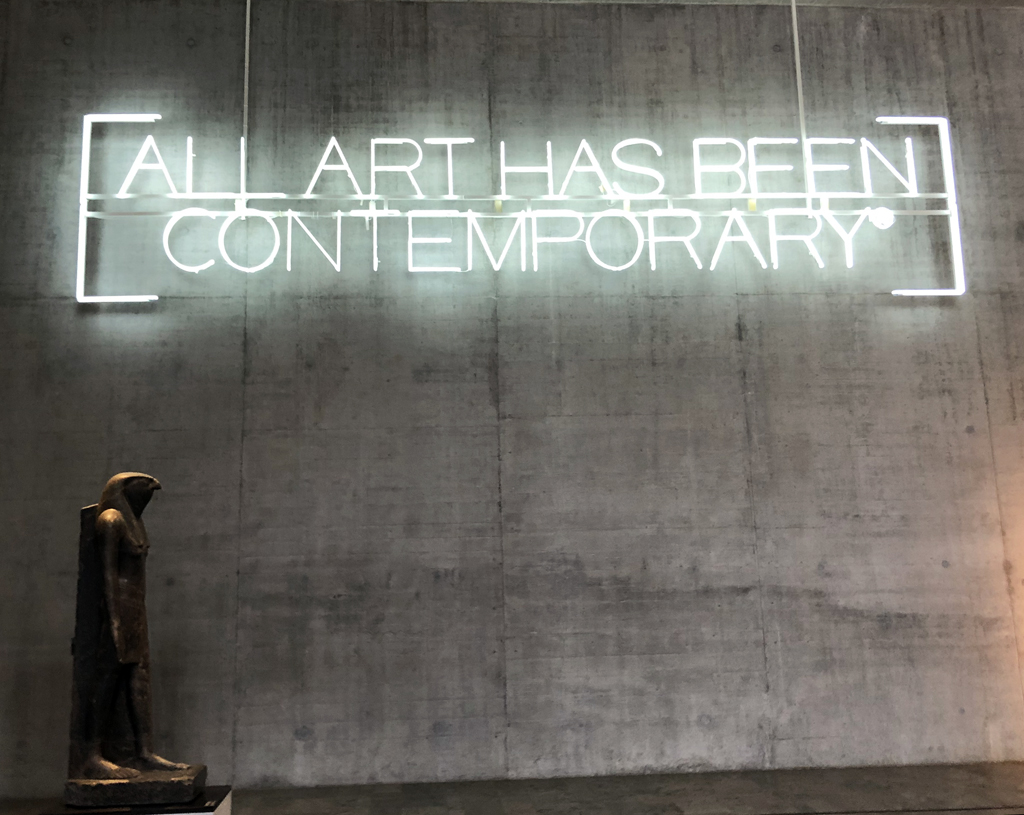 A nice feature of the museum is the very understated way they marked the path through the rooms. They installed a series of continuous brass arrows on the floor: 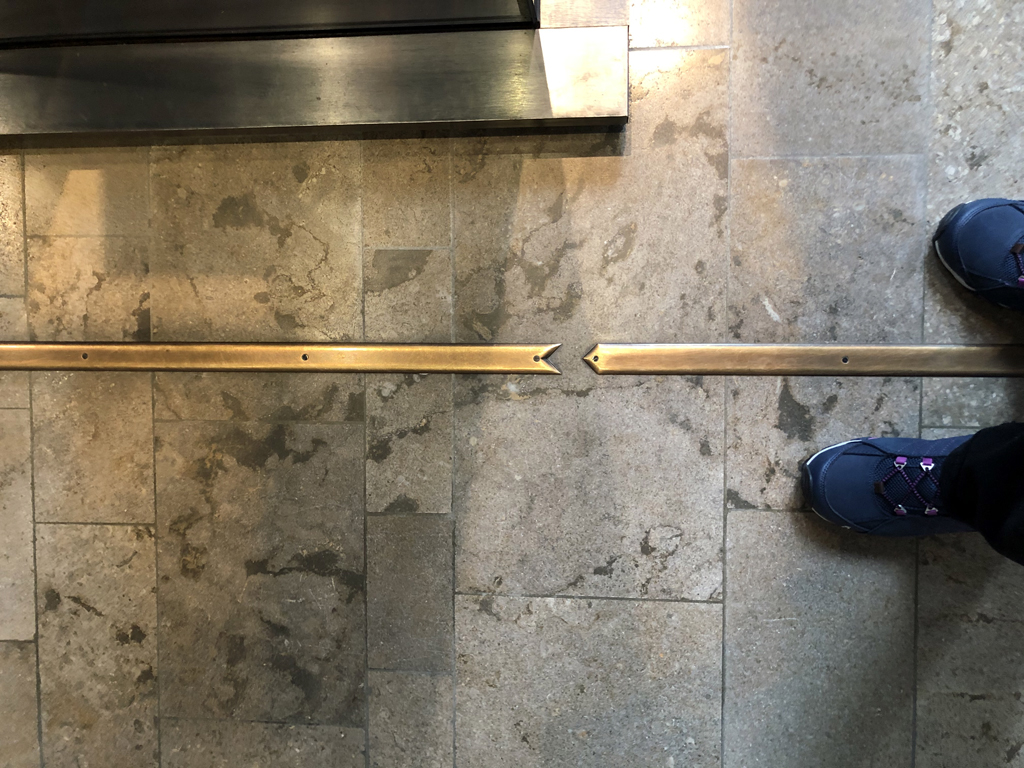 You can see them in this aerial view of one of the rooms: 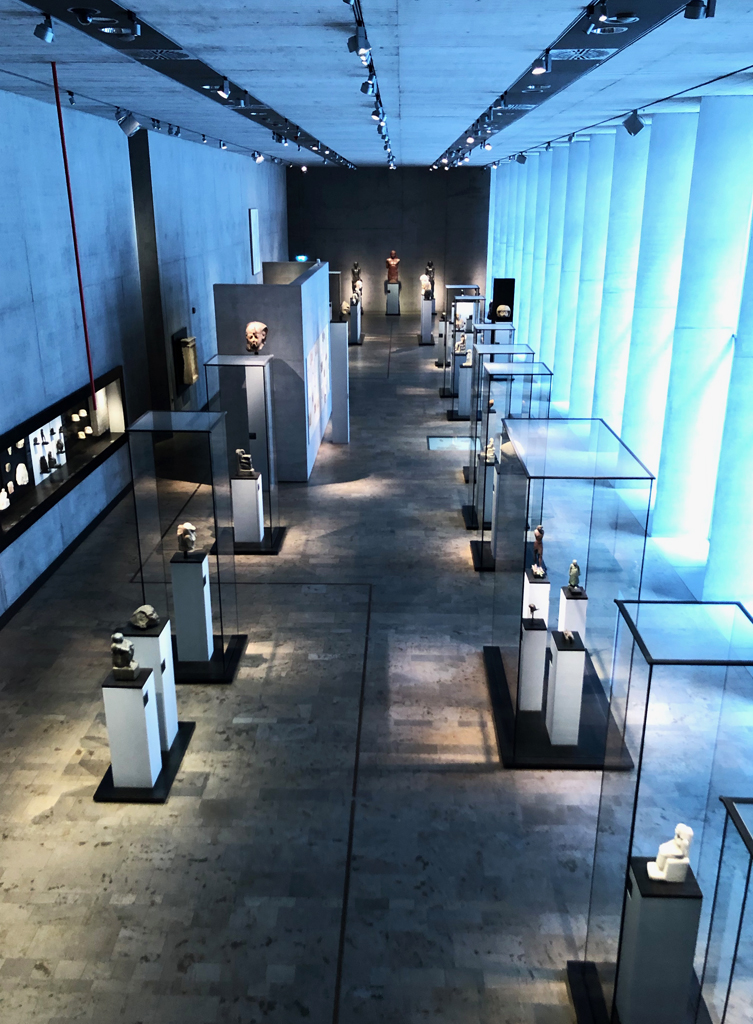 In this particular room, there were a lot of statues and pieces thereof that were small and oftentimes crumbled or broken. Once I made my way to the end of the room, I looked up to see these strikingly strong, very large pharoah statues that were such a dramatic departure from the rest of the items in the hall. Wow! 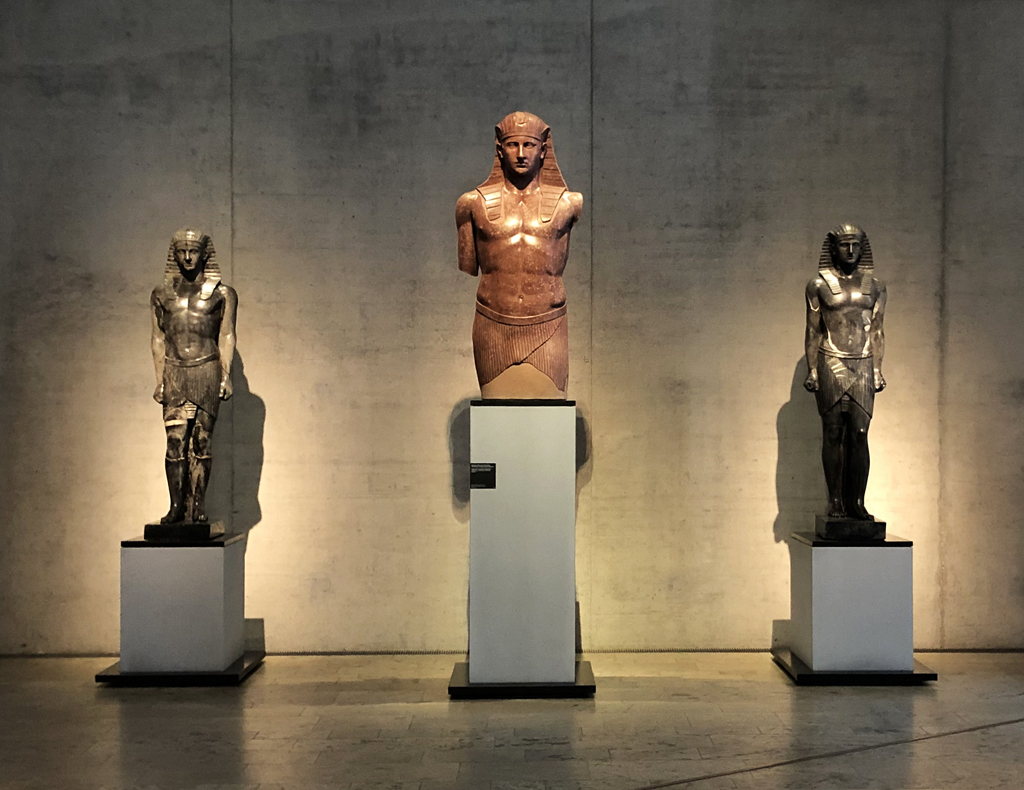 One of my favorite sections of the museum was the one devoted to animal cults. Here they had one of my favorite items, a death mask for an actual crocodile. You could even see the gauze wrappings inside it! 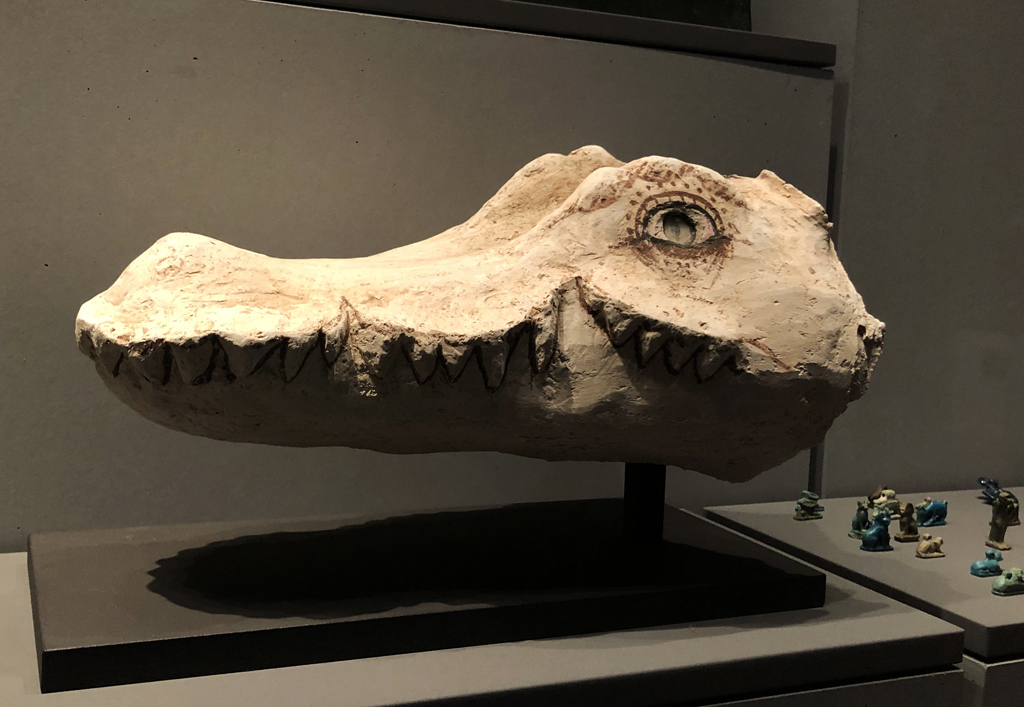 Here’s another crocodile figure, this time with gold inlay:

In one room was a glassed-in archaeology dig display: 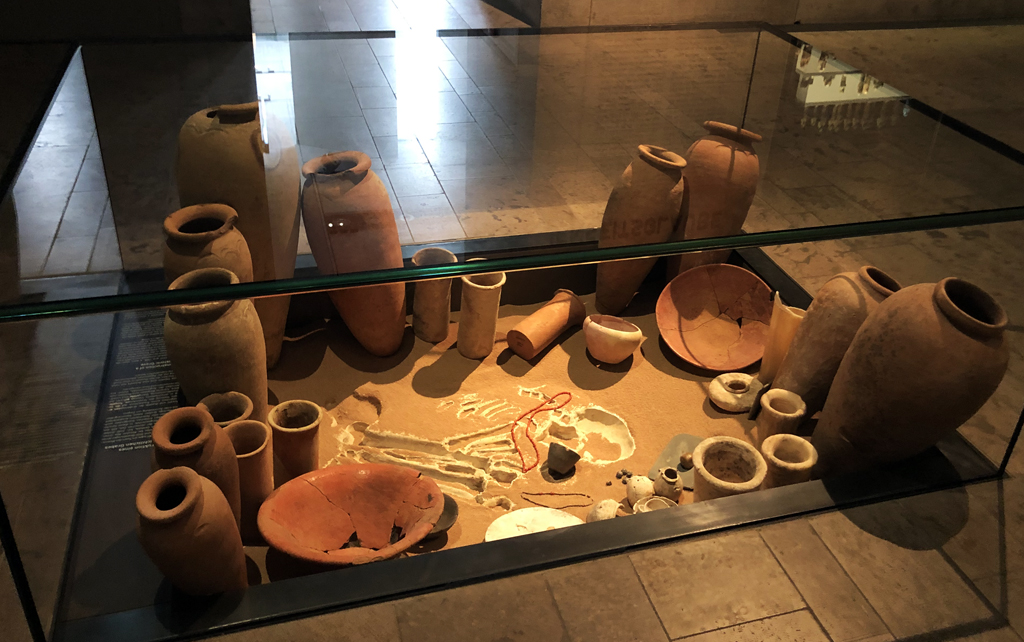 And in the pottery room, you can see two of the video kiosks in the foreground that explains the exhibit and has interactive features for the specific artifacts in that area: 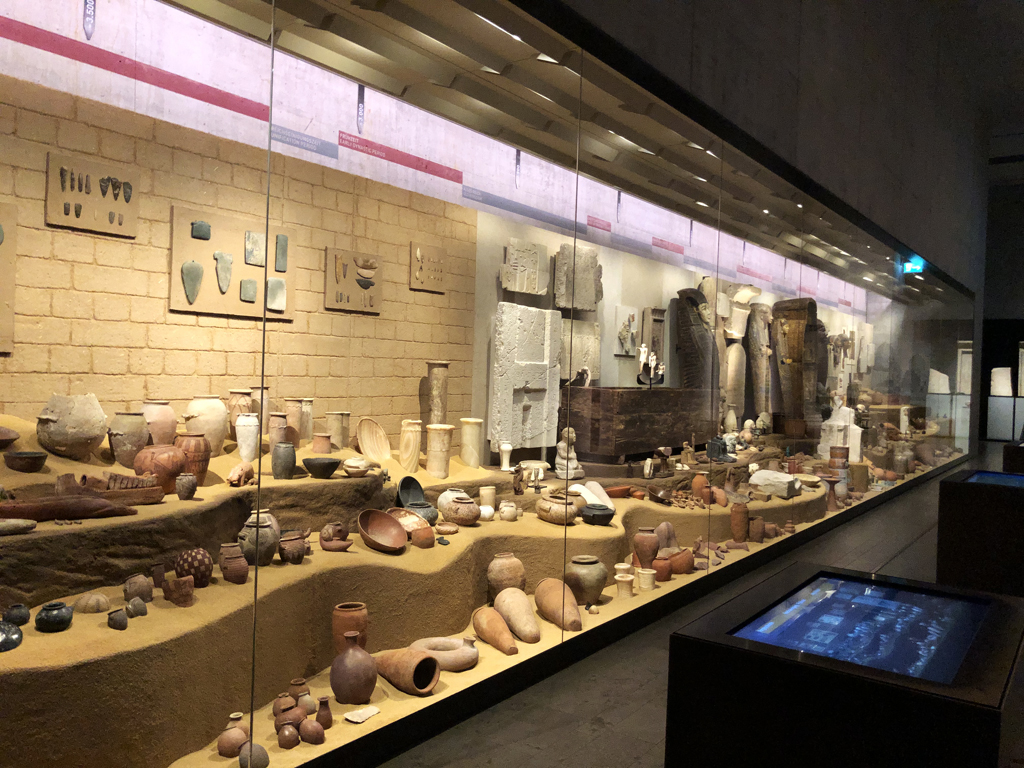 Some of my other favorite objects were in this room, too: 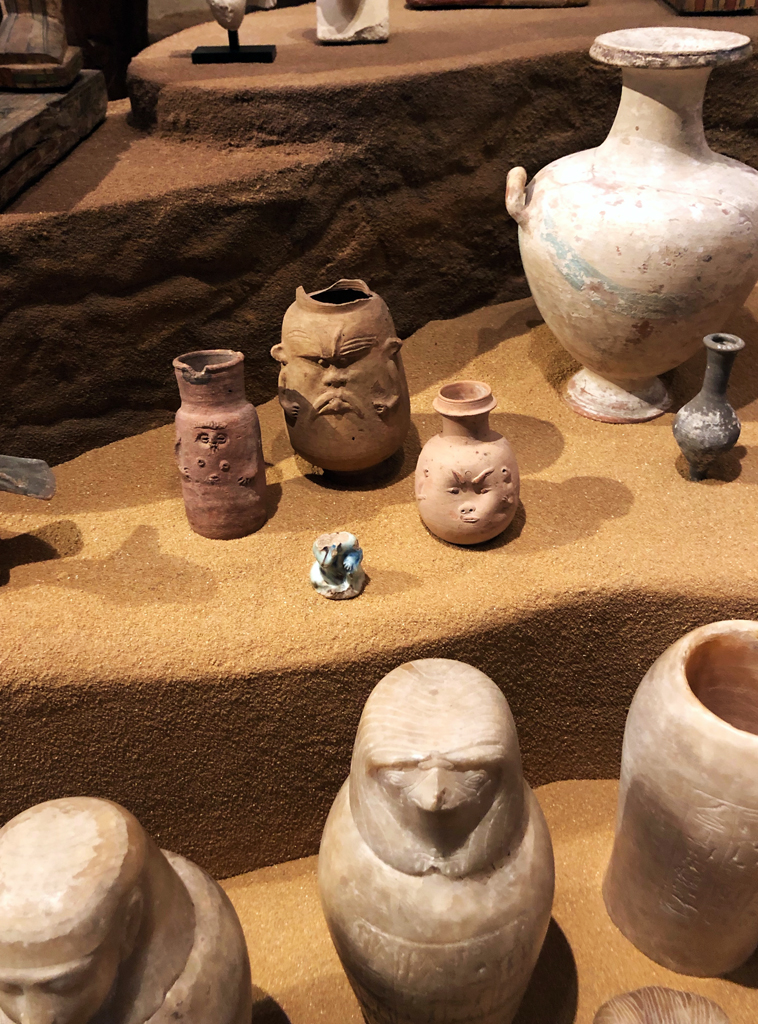 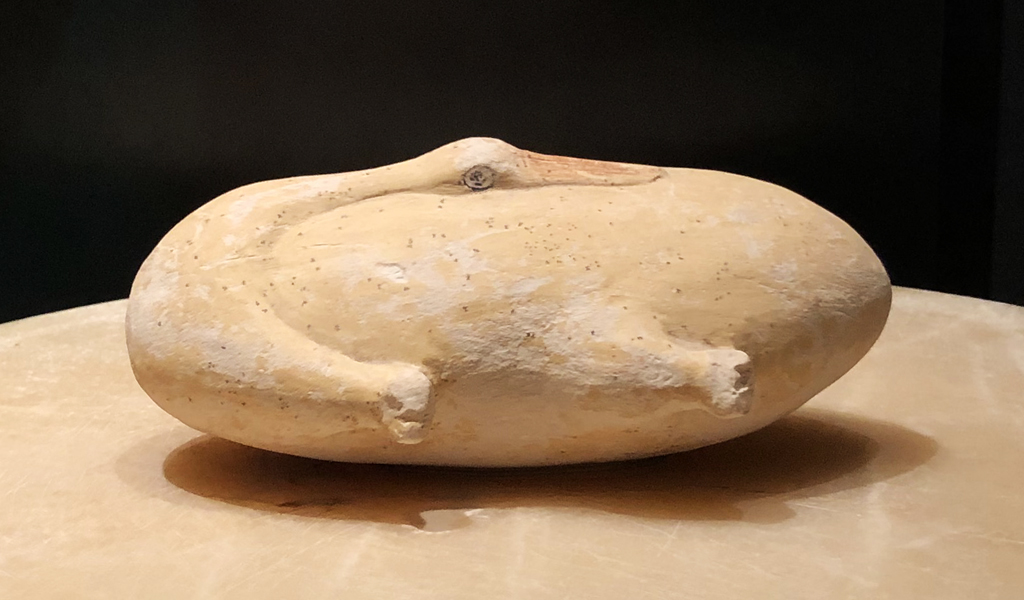 Of course, there was a big papyrus display: 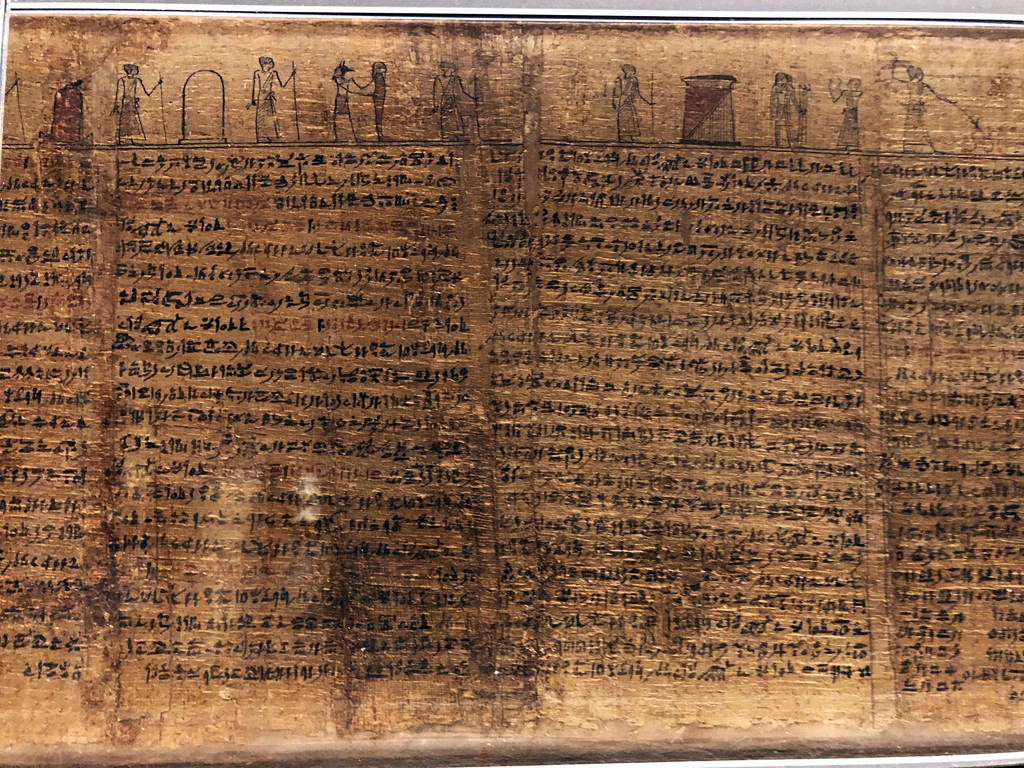 And textiles recovered from tombs:

I enjoyed the faience display. I remember reading this word as a child and wondering what in the world it was. Hint: it’s a type of ceramic coated with a bluish or turquoise-colored glaze. 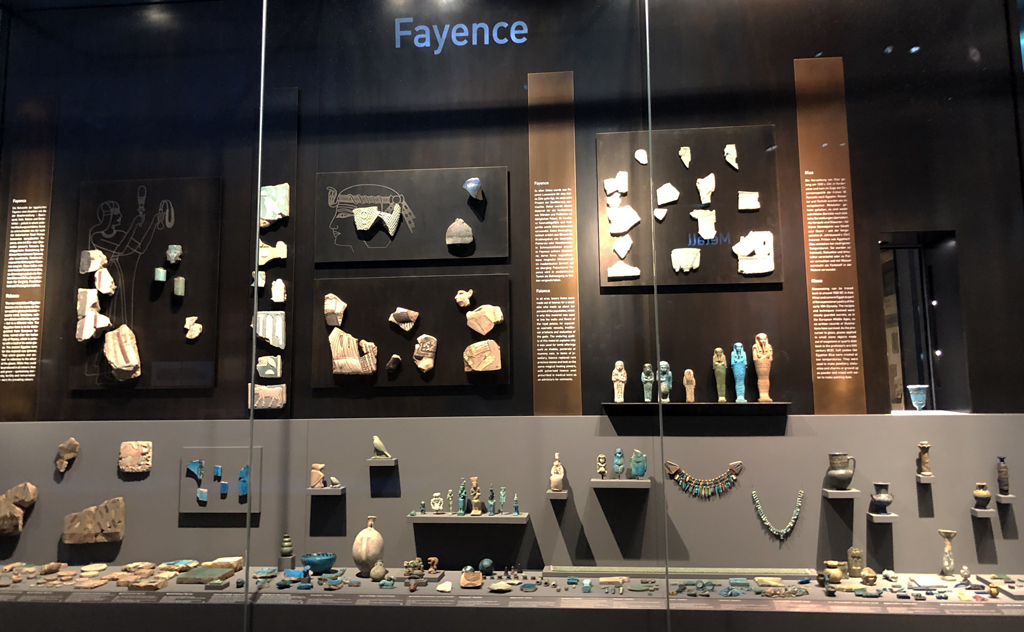 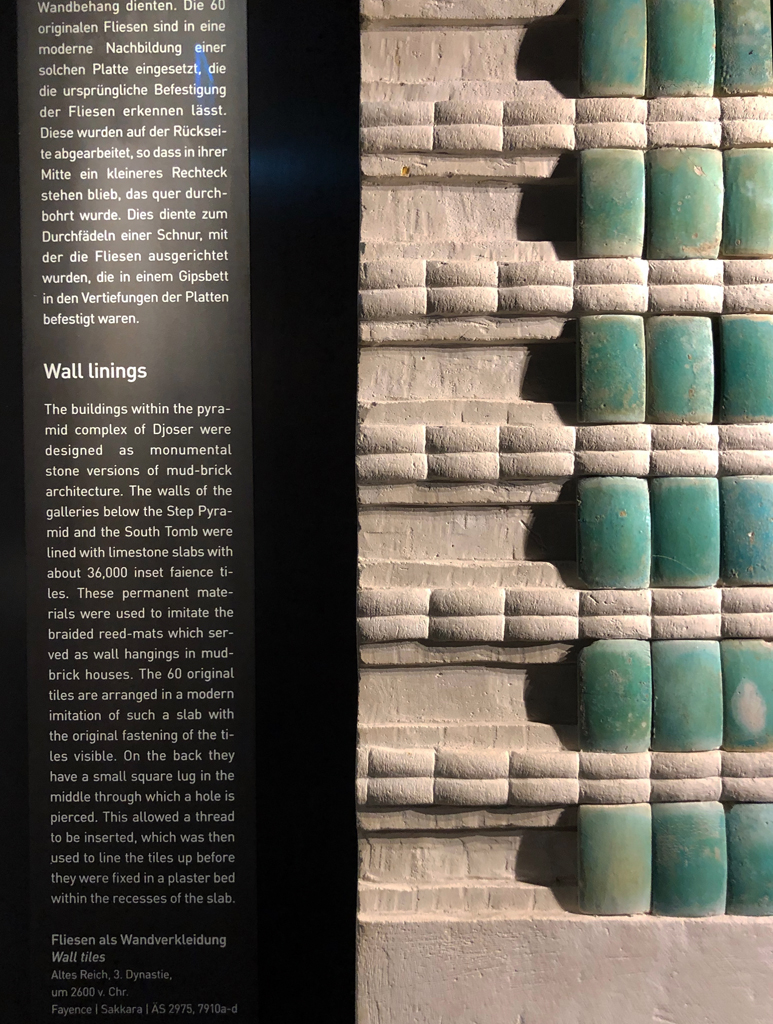 Some of the figurines in this case are of faience: 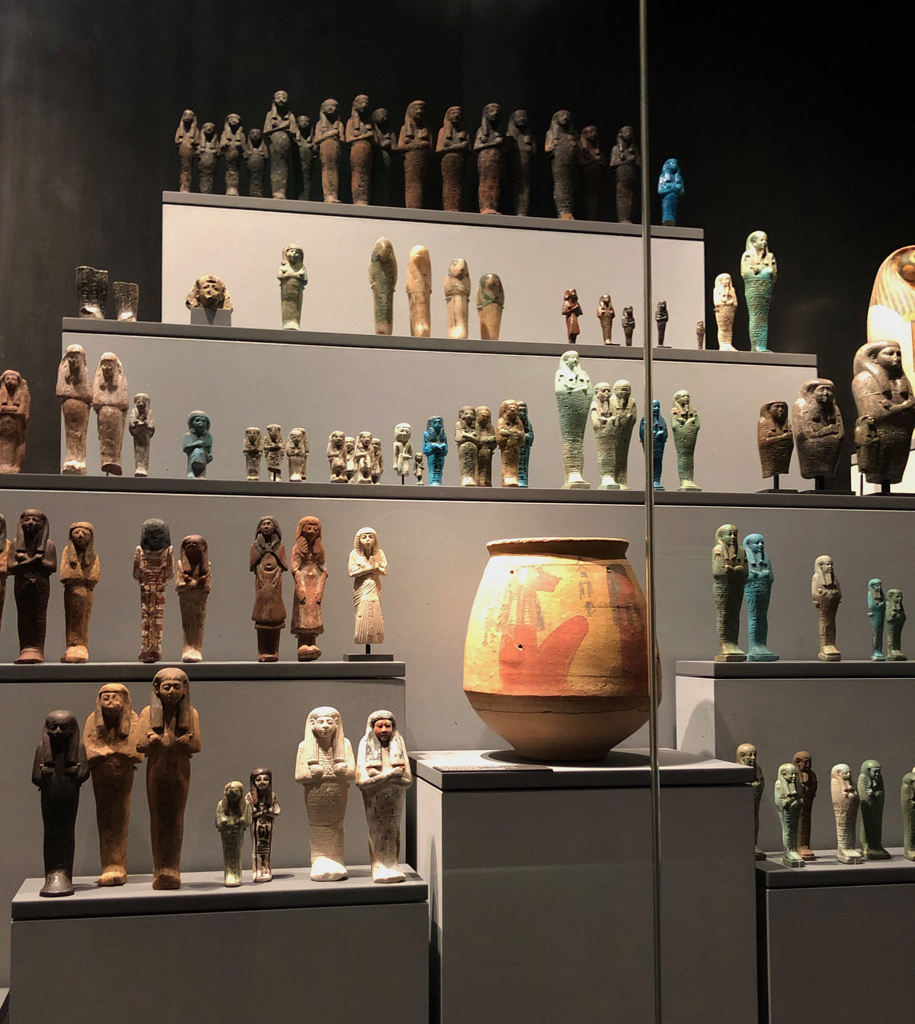 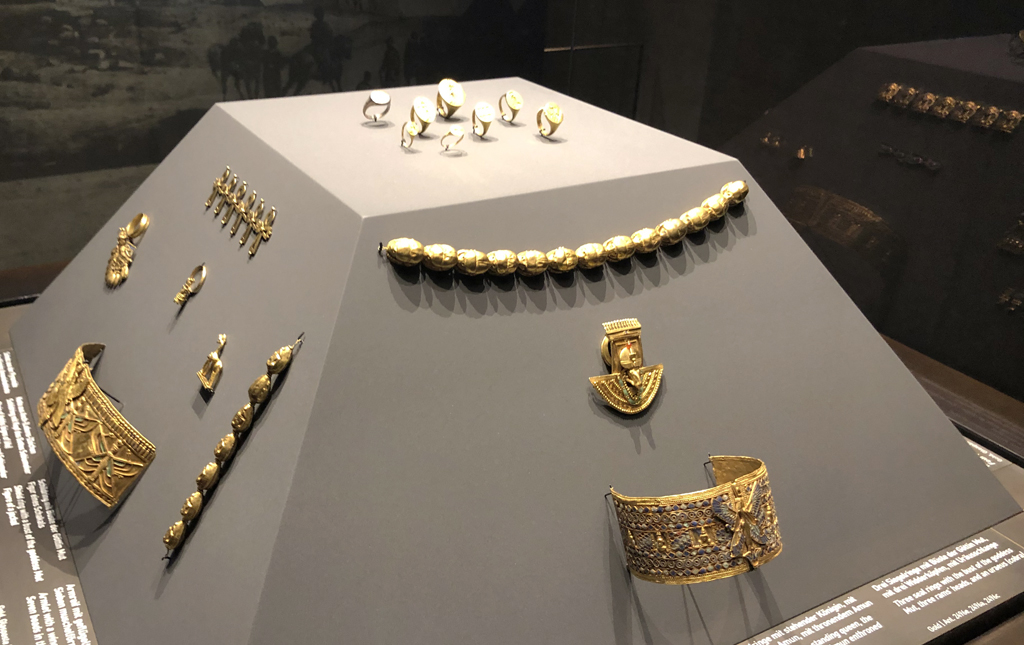 And, of course, mummies – or at least sarcophagi: 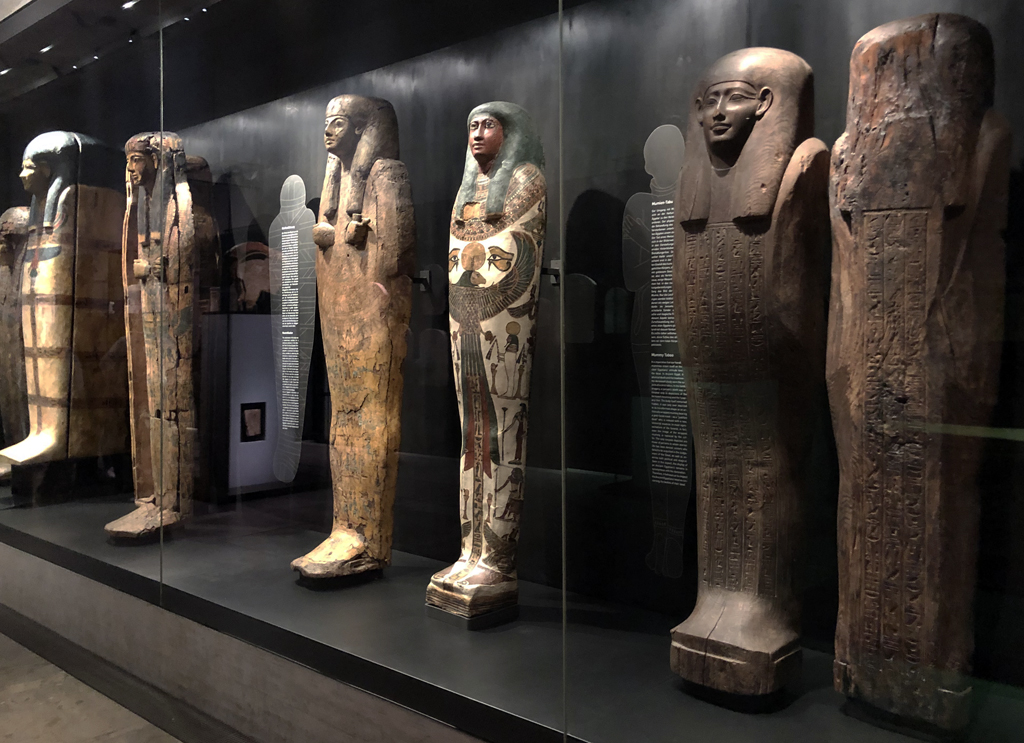 These are from a child’s tomb; the coffin is only about three feet long and the fruits are mummified, too: 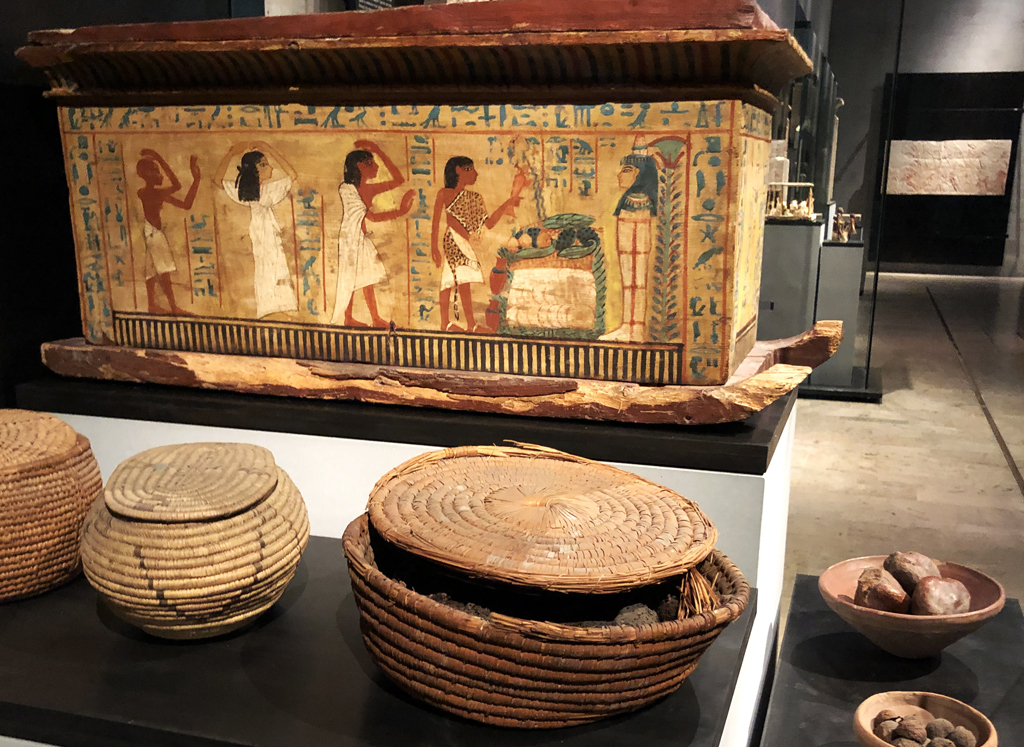 A fascinating exhibit was this 3D-printed model of a chapel in Naga, Sudan: 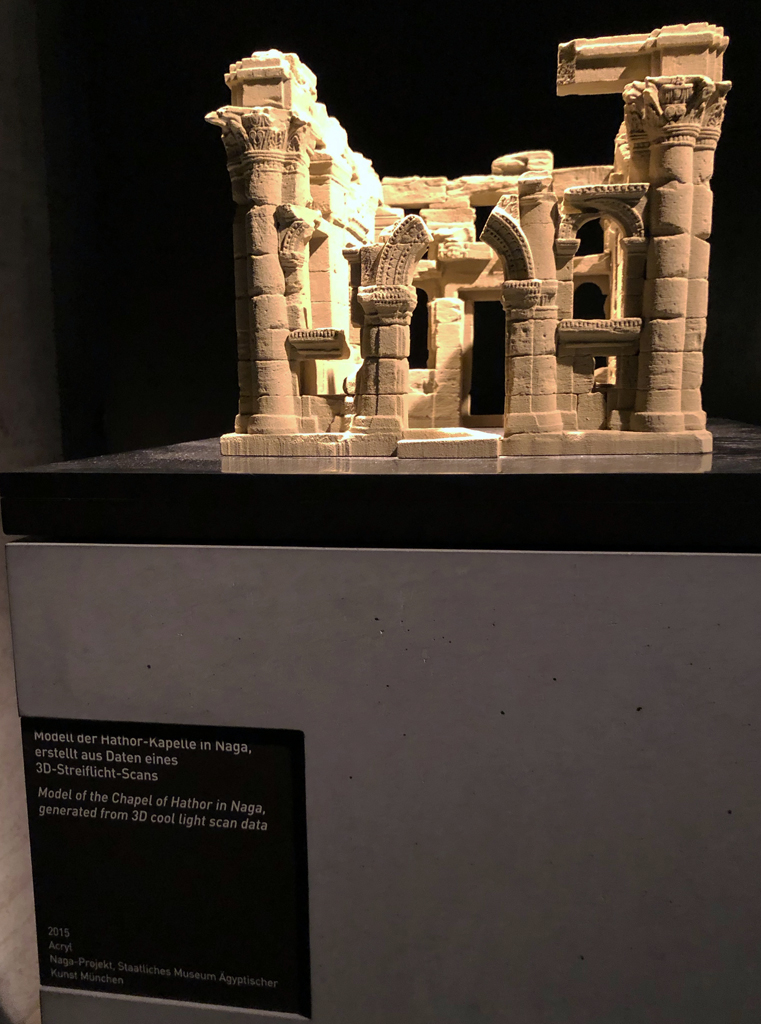 It was generated, as the plaque says, from “cool light scan data”. If I understand it correctly (no guarantees), photos and other measurement data are combined in the computer to make a 3D image. In this case, the object is a chapel in Naga that is part of an excavation that has been managed by the museum since 2013.

In the last room were five HUGE relief panels; they were about twice my height and very imposing: 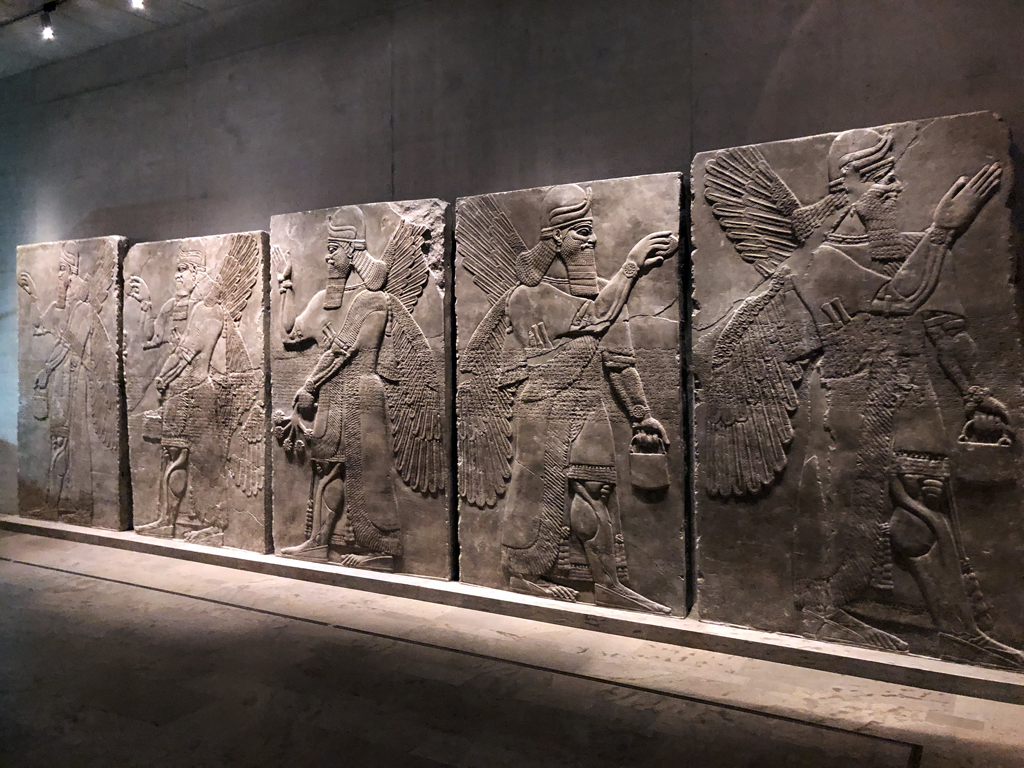 These panels had been acquired in the 1800s by King Ludwig I (father of “Mad” King Ludwig II). Although Munich and the royals had a few Egyptian relics at the time, it was King Ludwig I’s idea to make the collection into a museum. His first acquisition was in 1815, which is the statue of Horus in the picture of the neon sign at the top of this post. The collection resided in the royal Residence and other places before this museum was built.

I was certainly impressed by this place. I’m not ga-ga over Egyptian relics, but this museum definitely piqued my interest in them. Each item had detailed signage in German and English, and the lighting was fantastic.

Admission was only seven Euros (about eight US dollars). It’s less for seniors and other categories, and all tickets include a free audio guide. Note: Admission is only one Euro for everyone on Sundays! It’s easy to get to the museum quarter. Several subway lines have stops there, and a 10-minute walk (15 minutes for Americans!) gets you there from the main train station.

As is usual in Europe, the gift shop was rather small, but there were some good books and things in there. If they only knew how much shopping American tourists want to do! But there was a good cafe which took up most of the gift shop real estate, which is what Europe wants, I guess. 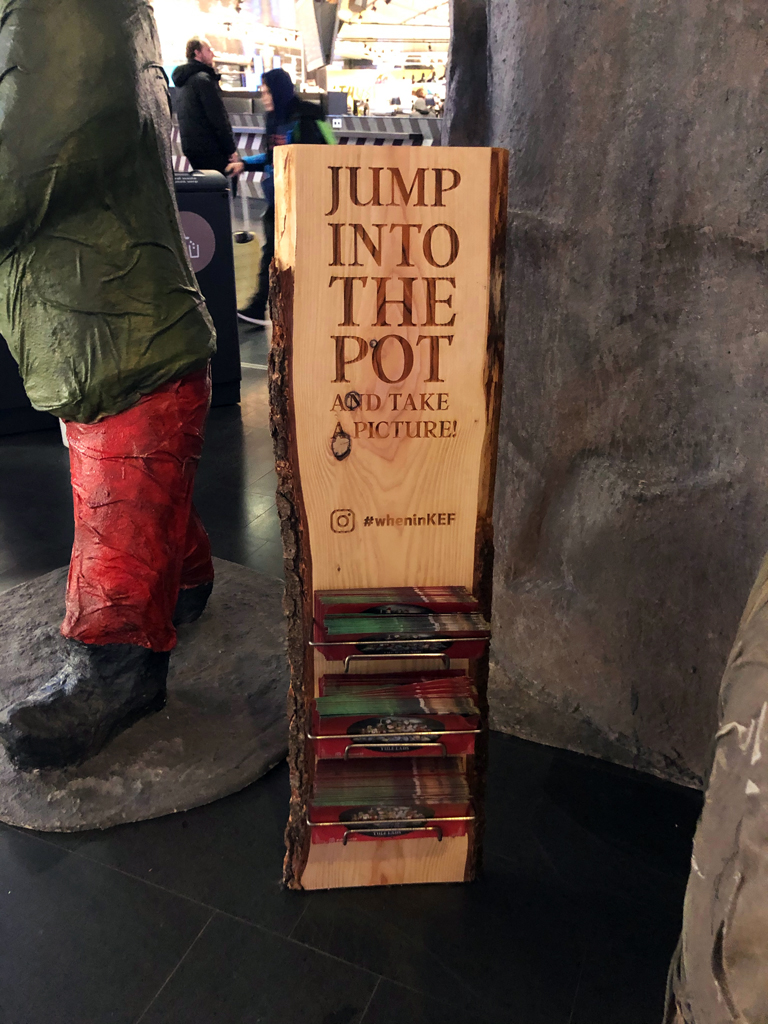