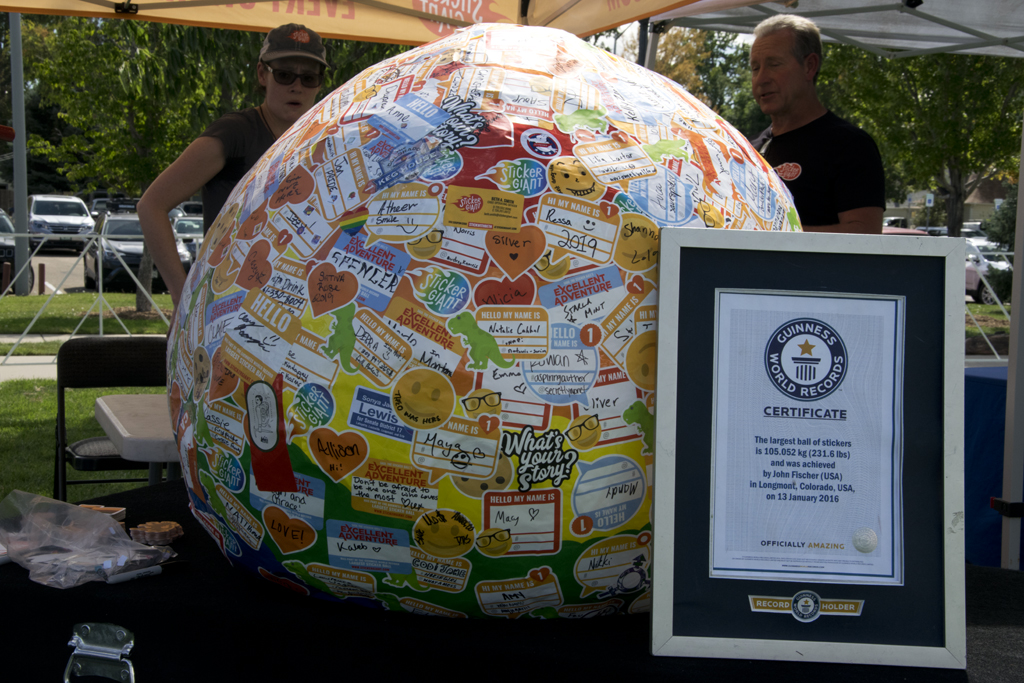 For the first post of 2020 (Happy New Year!), I thought I’d start out with a Guinness World-Record holder in my area. There is a sticker company called Sticker Giant in Longmont. They are creators and caretakers of Saul, the Giant Sticker Ball.

You’ve heard of Longmont if you’ve been following my blog for the past couple of years. It’s home of Cheese Importers, Wings of Change airport sculpture, the Roost restaurant and several other things I’ve reported on.

Back in the fall, I picked up a friend, Cheryl, to seek out Sticker Giant and Saul, the World’s Largest Sticker Ball! In order to see Saul, I had to get us free tickets for a company tour on the company’s website, so we knew they were expecting us.

We set out on a very warm day in late September, following the GPS instructions, which took us to a back road neither of us were familiar with. After a couple of wrong turns righted, we arrived at Sticker Giant, relieved but a few minutes late. We entered, and I told the friendly man there we had tickets for the tour. He immediately asked, “Are you here for the tour or for Saul?”

He answered, “He just left.” He offered no other explanation but pointed to what I assumed was Saul’s regular place of residence, an empty frame leaning up against the lobby wall. 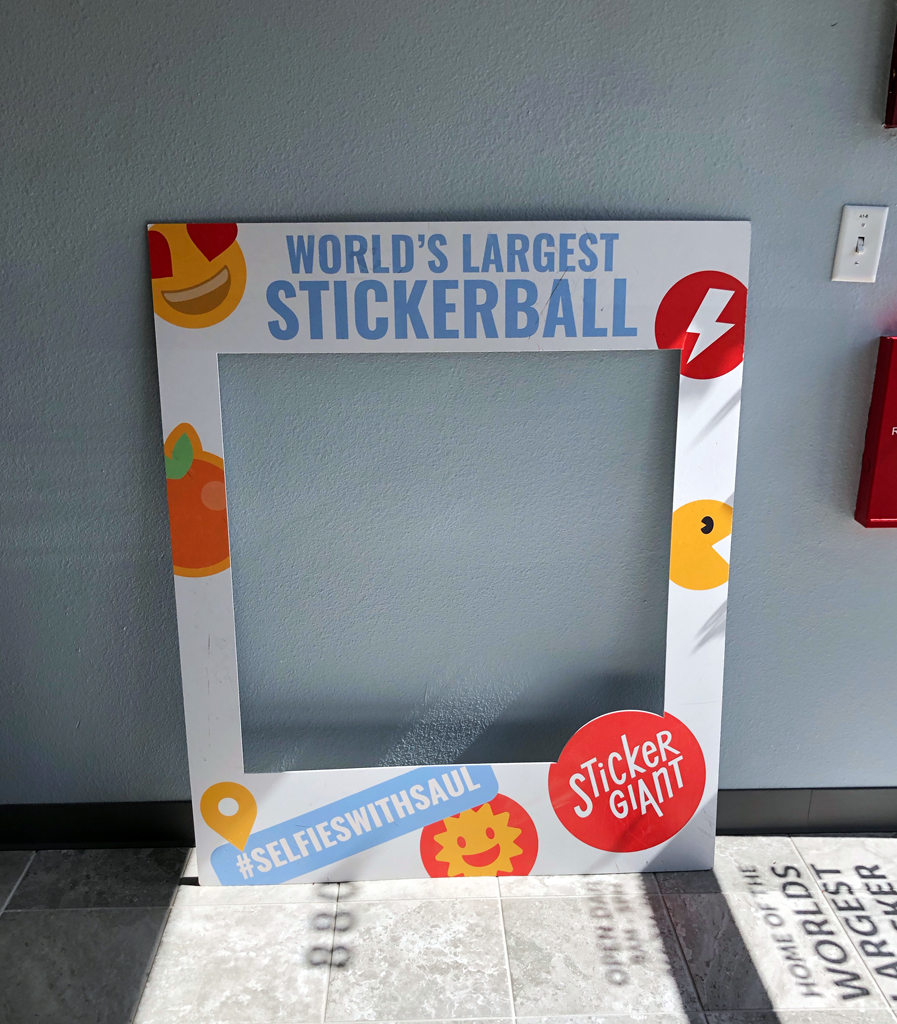 I wasn’t sure what to say, but the friendly man told us that Longmont was setting up for their annual Oktoberfest in Roosevelt Park near downtown. He offered that maybe we wanted to go there to “visit him”. It was a little disconcerting that everyone at the company referred to this sticker ball as if it were a living being.

He gave us directions, but I already knew sort of where the park was because I’d visited the nearby bronze Teddy Roosevelt sculptures. So we set off again and presently found the park. There we saw the Sticker Giant tent and Saul! 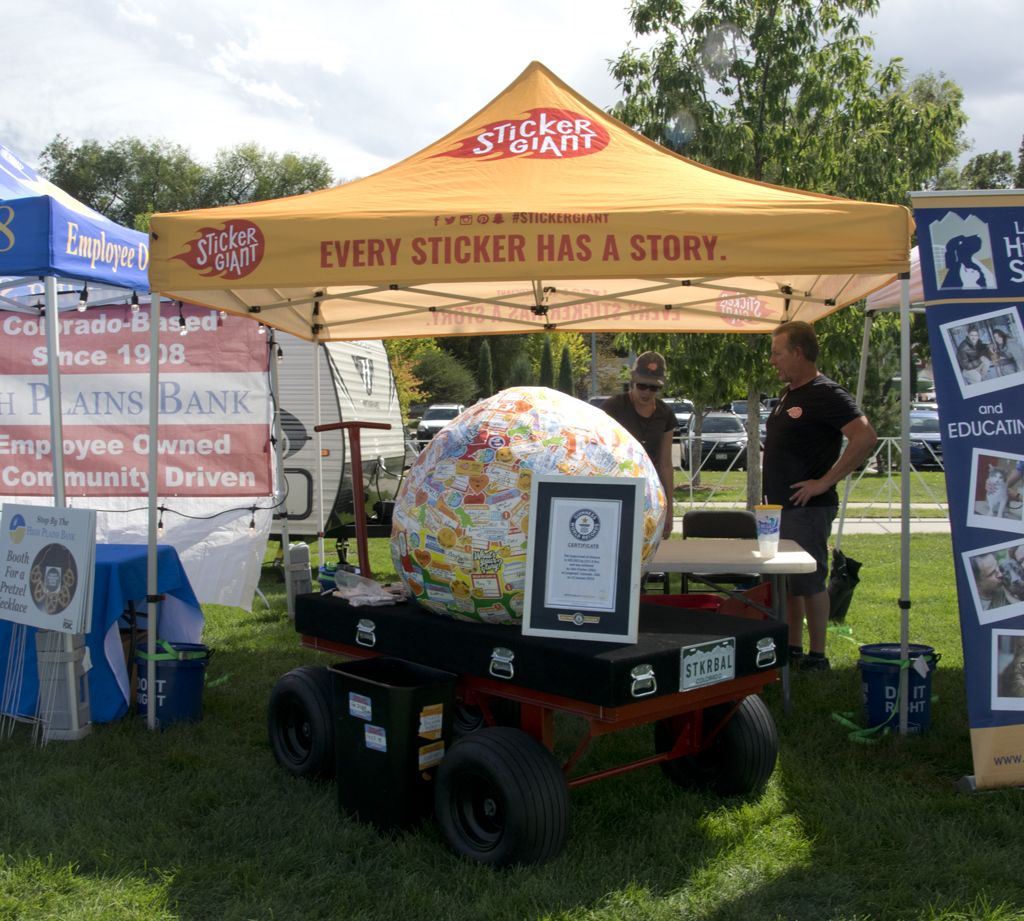 The people there were even friendlier than the ones at the office. They showed us the Guinness book in which Saul appeared: 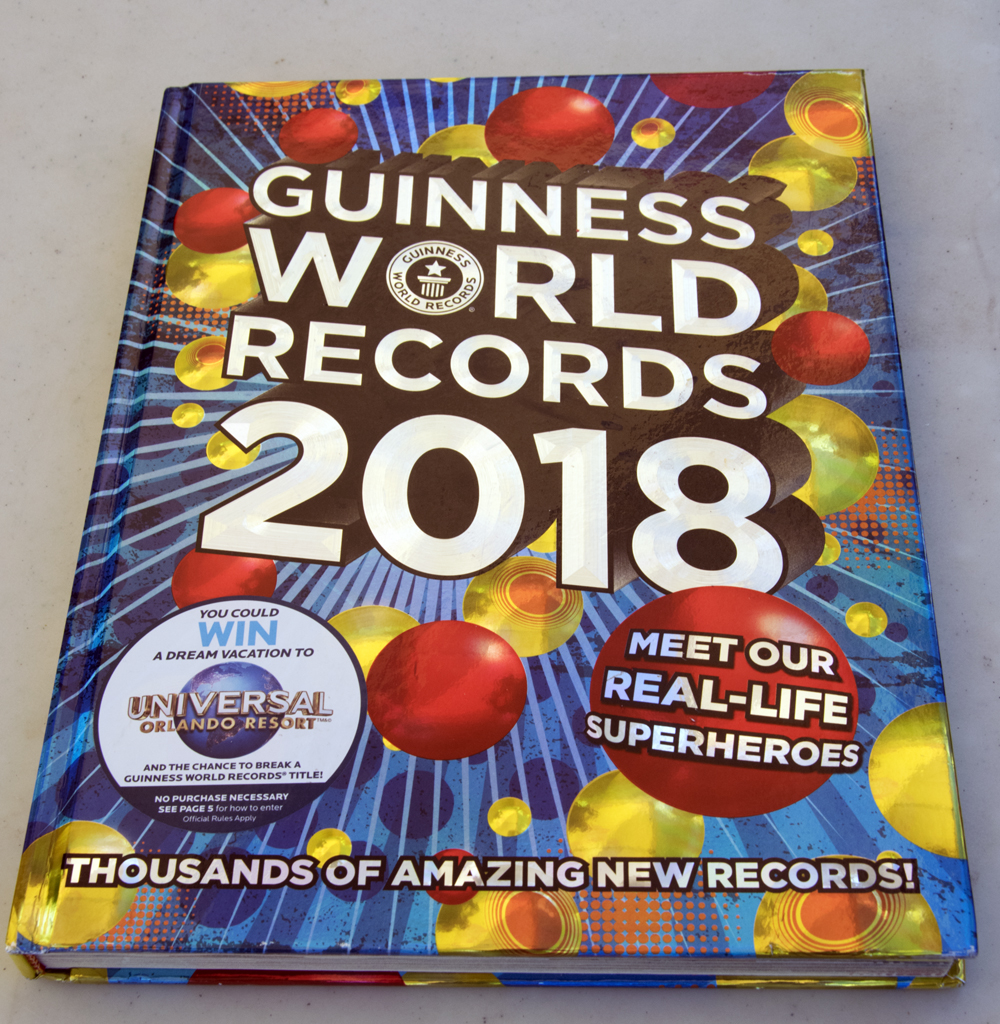 And told us “he” weighs upwards of 239 pounds. He has his own cart and must be lifted and lowered onto and off of it with a small crane. He also has to be rotated often because he tends to become pear-shaped if he sits in one place too long. Wow, I’m calling it “he”, too! 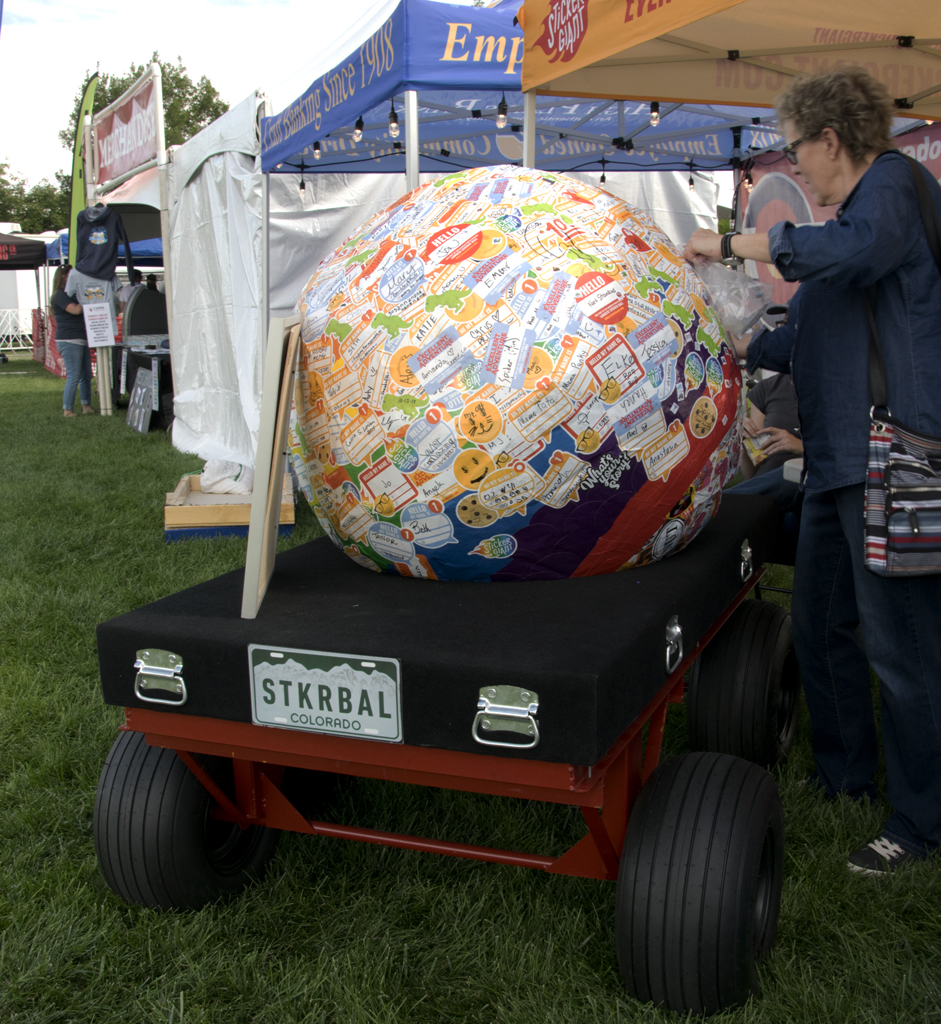 Everyone is encouraged to add stickers to Saul, who is named after the skeezy lawyer from Breaking Bad and Better Call Saul TV shows. I couldn’t be more happy about that!

I’d been saving stickers for a year or so and I gave half to Cheryl who diligently began adding to Saul’s weight and girth. 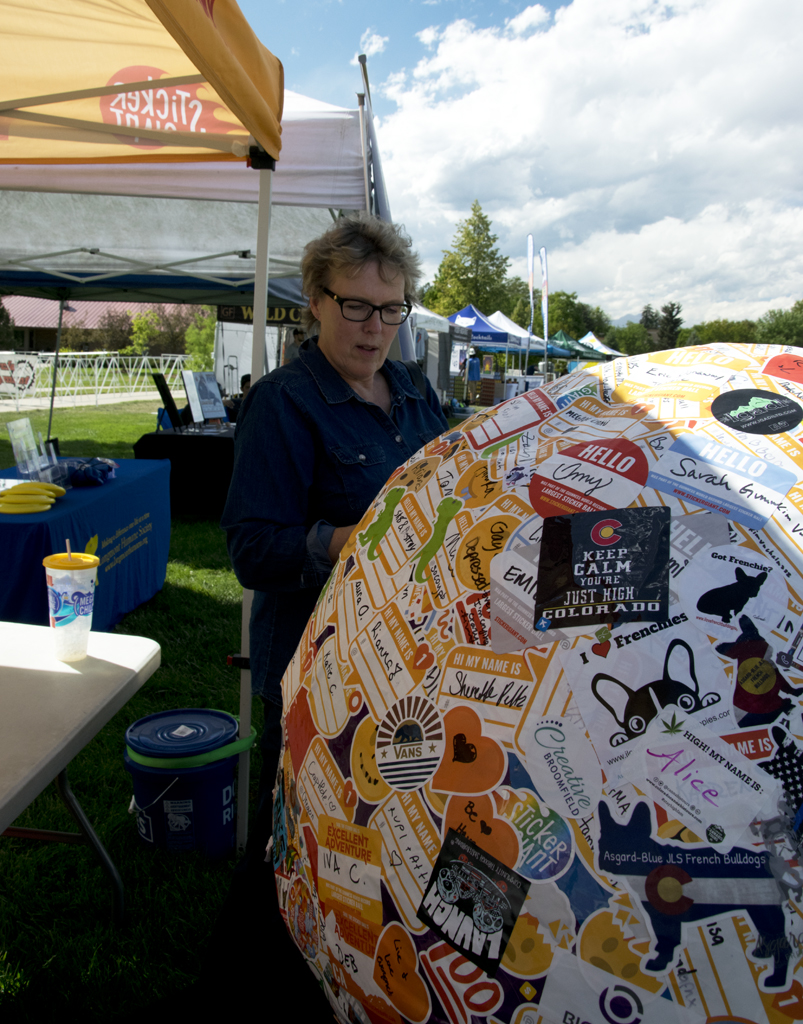 I added my own stack. Here are most of them: 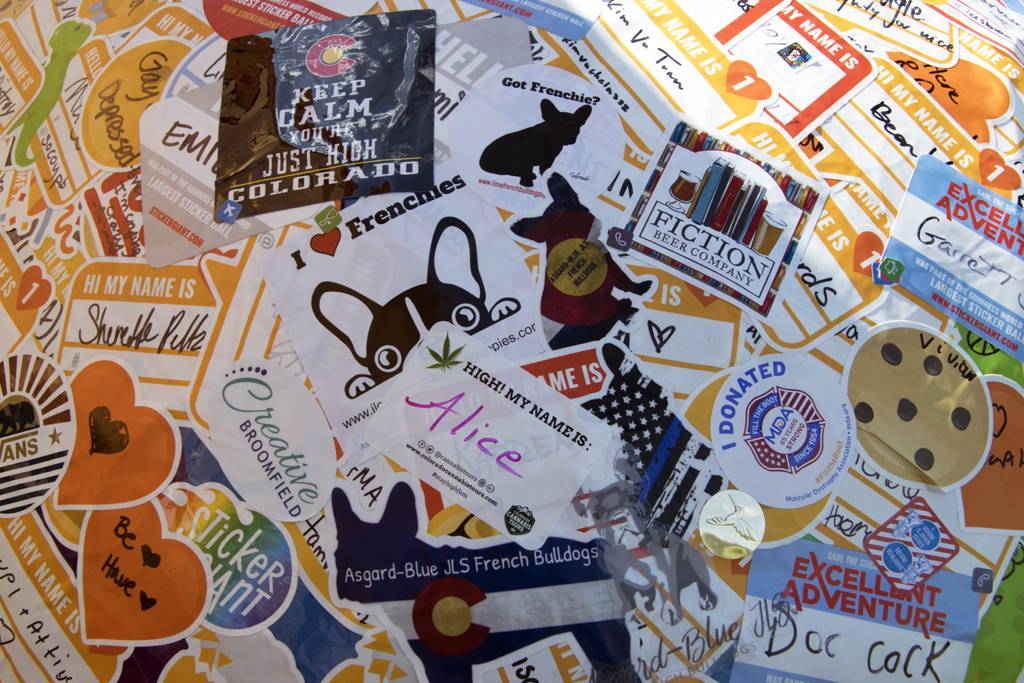 Of course, Sticker Giant is a sticker manufacturing enterprise, so they had stickers available, too, in case you didn’t bring your own. They were Oktoberfest-themed: 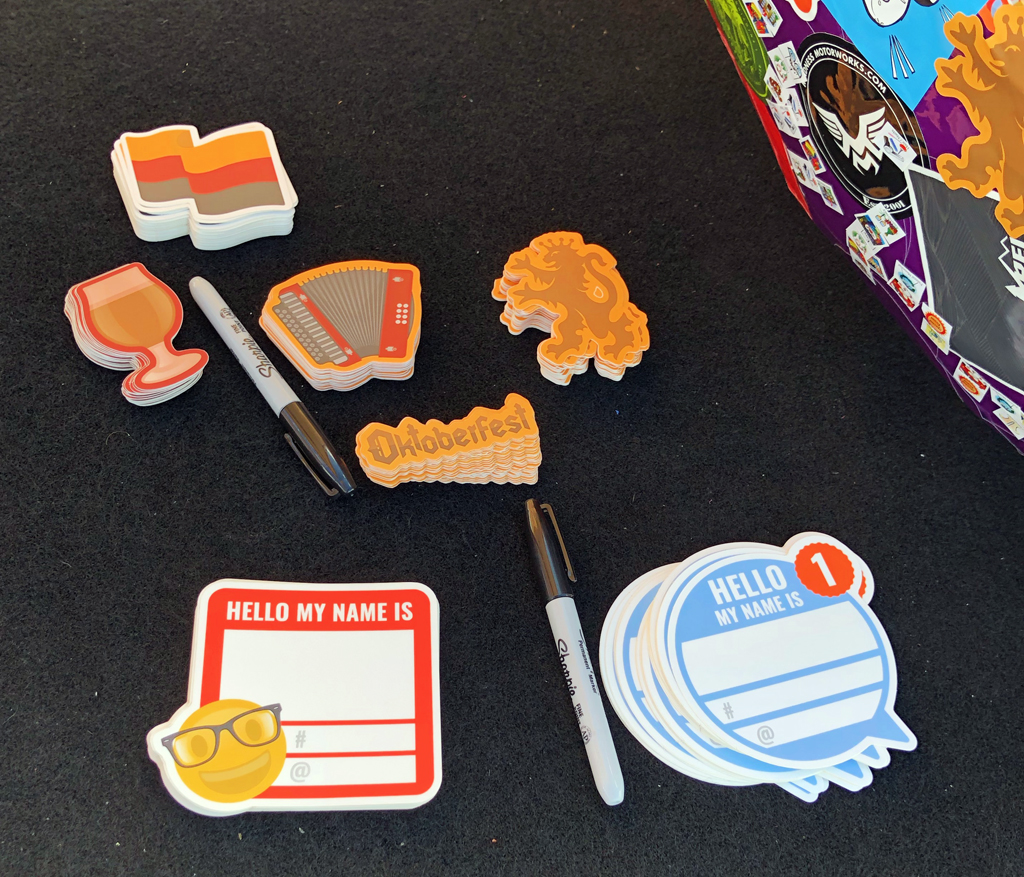 As I mentioned before, to see Saul on a normal day, you must obtain free tickets for a factory tour on their website. The tours are only on Fridays and are for a limited number of people. I was surprised that it took me a few weeks to get the tickets. It’s a popular tour in summer, apparently.

It was all worth it, though, even tracking Saul down at Oktoberfest. I’d recommend this outing as something free and really fun to do. And it’s kid-friendly, too! Don’t forget your stickers! 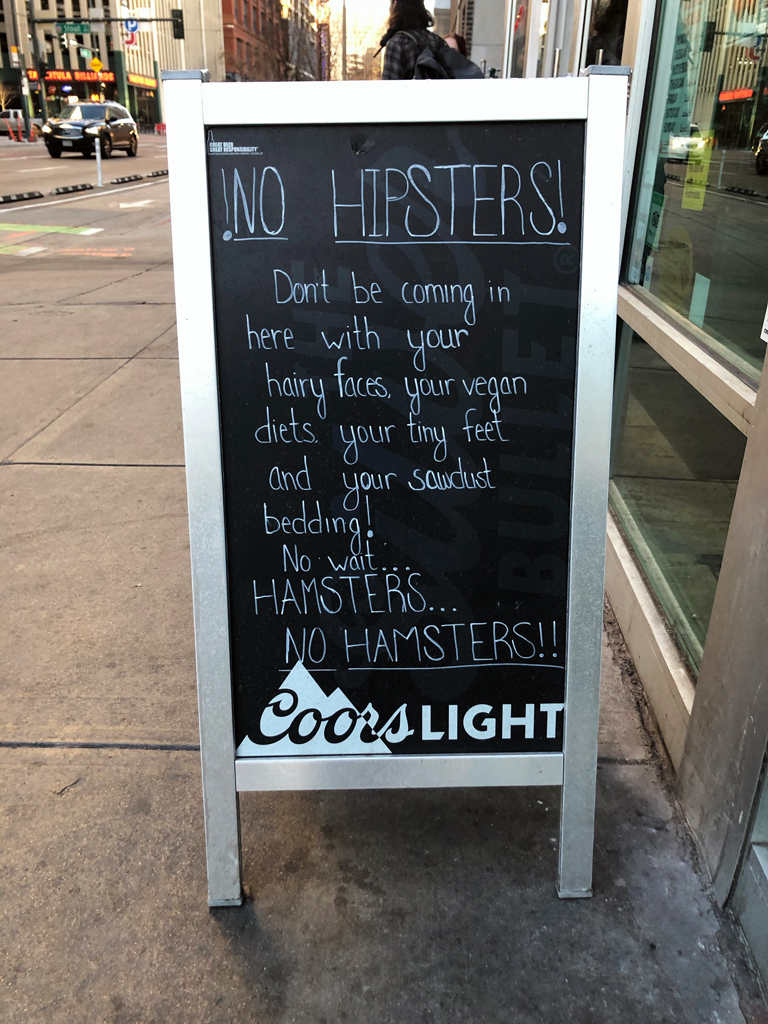