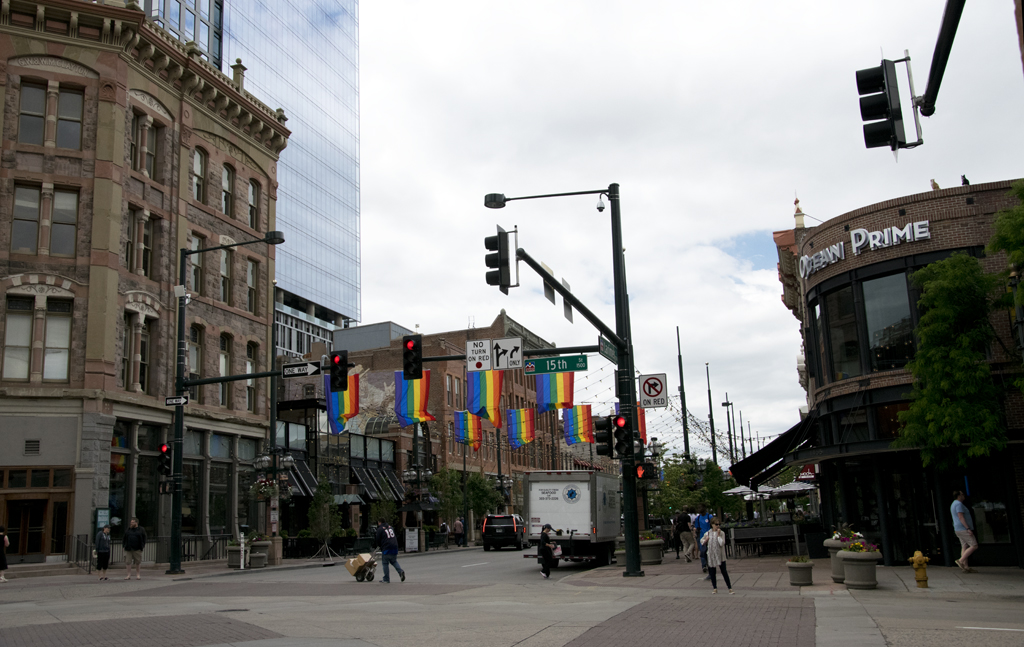 In many respects, I’m very surprised it took me so long to visit Larimer Square in Denver. I’ve read about it, it was the first “rescue” by one of my local heroes, Dana Crawford, and it’s very easy to get to. Not sure why it took me 2 1/2 years to visit! Anyway, here we go:

A little Denver history: A man named Green Russell and some pals from Georgia founded a settlement called Auraria just west of Cherry Creek. Here’s a shot of Cherry Creek facing north. Larimer Square was to my right as I took this picture. 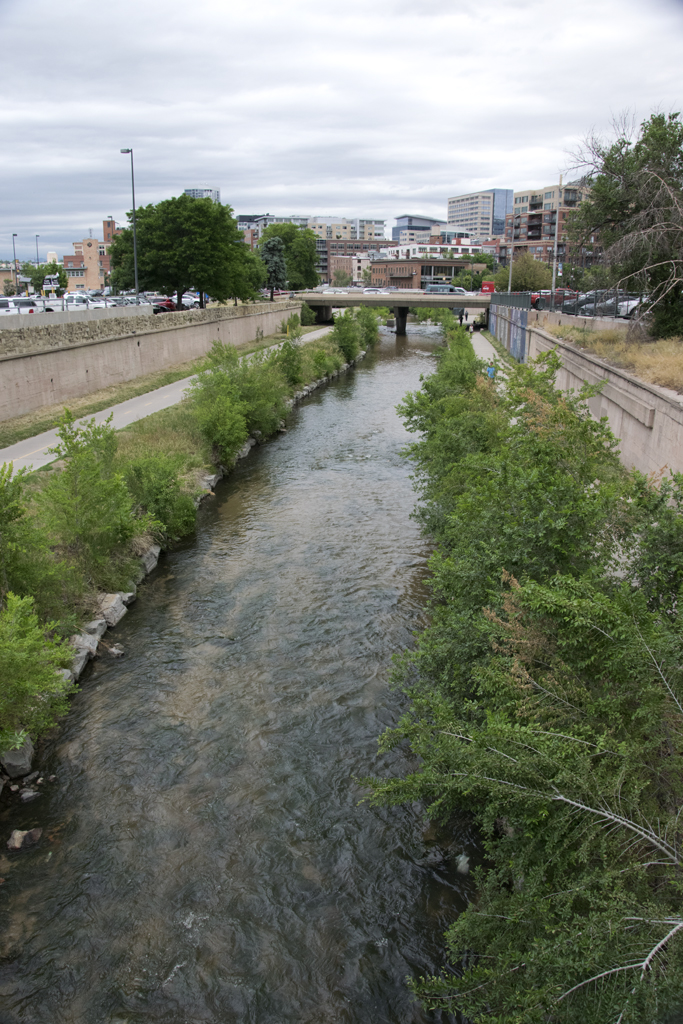 This group found gold in the area, and, long story short, the discovery prompted the Pike’s Peak gold rush in 1858. Larimer Street, which began in Auraria, to the left of the creek above, runs northeast-southwest through present-day LoDo (Lower Downtown) in Denver, about a half-dozen blocks from Union Station. Larimer Street gets its name from General Larimer, a Kansas state senator from Pennsylvania (!) and land developer who founded Denver City on the other side of Cherry Creek. Remember that Colorado was part of the Kansas Territory then – it didn’t become a state until 1876. And Auraria was later annexed by Denver in 1860. FYI, Larimer was smart enough to name Denver City after the Kansas territorial governor who had the power to say which settlement would get to retain the name of the growing city which would become the Arapahoe County seat. If not for that, we could easily be living in Auraria, Colorado.

All this means that Larimer Street is pretty much the oldest part of Denver. Lots of Old-West buildings grew up there and lots of ne’er-do-wells, politicians and characters came and went. Fast forward to the 1960s, when Larimer Street ended up on the demolition list in the name of urban renewal. Dana Crawford spearheaded this personal project to find investors and save the 1400 block of Larimer Street. It took over 10 years, but the project finally ended in the preservation of the block with the original buildings more or less intact. The 1400 block became Larimer Square, Denver’s first historic district. Now there are over 50!

Larimer Square has signature festival lights strung across the street. I was there in June, and you can see that they had decorated with rainbow flags in celebration of LGBTQ Pride Month. 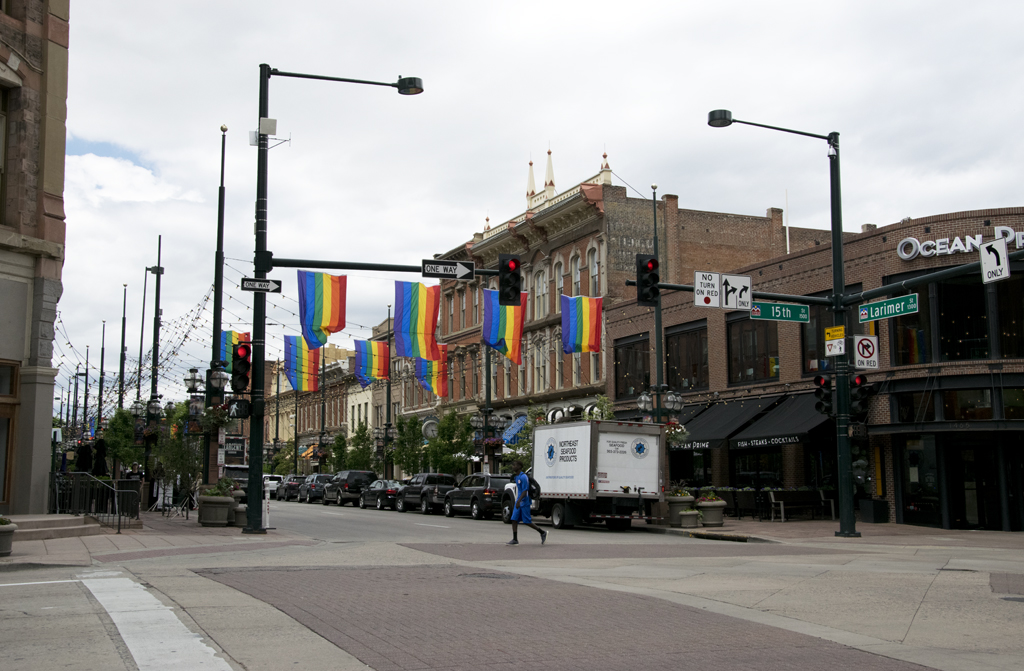 The Larimer Square website has an excellent diagram of the buildings on either side of the street, along with a historical fact or two about each one. I have a few pix of the buildings: 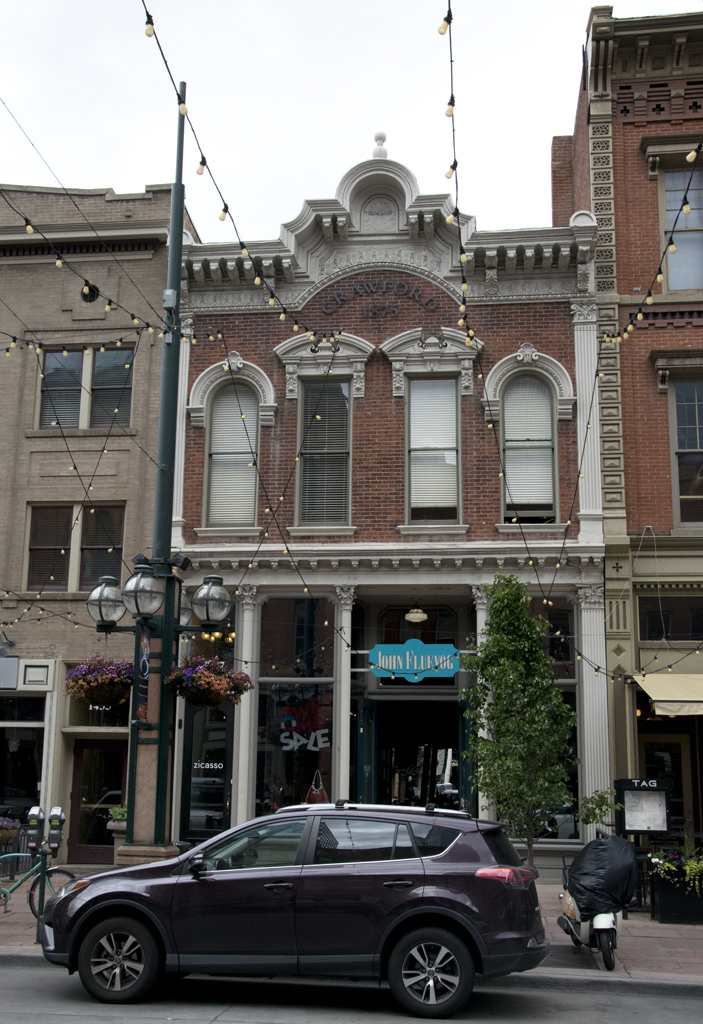 The Miller Building, once home to Gahan’s Saloon, a known gathering place for politicians, police and reporters. I can almost hear the piano music! 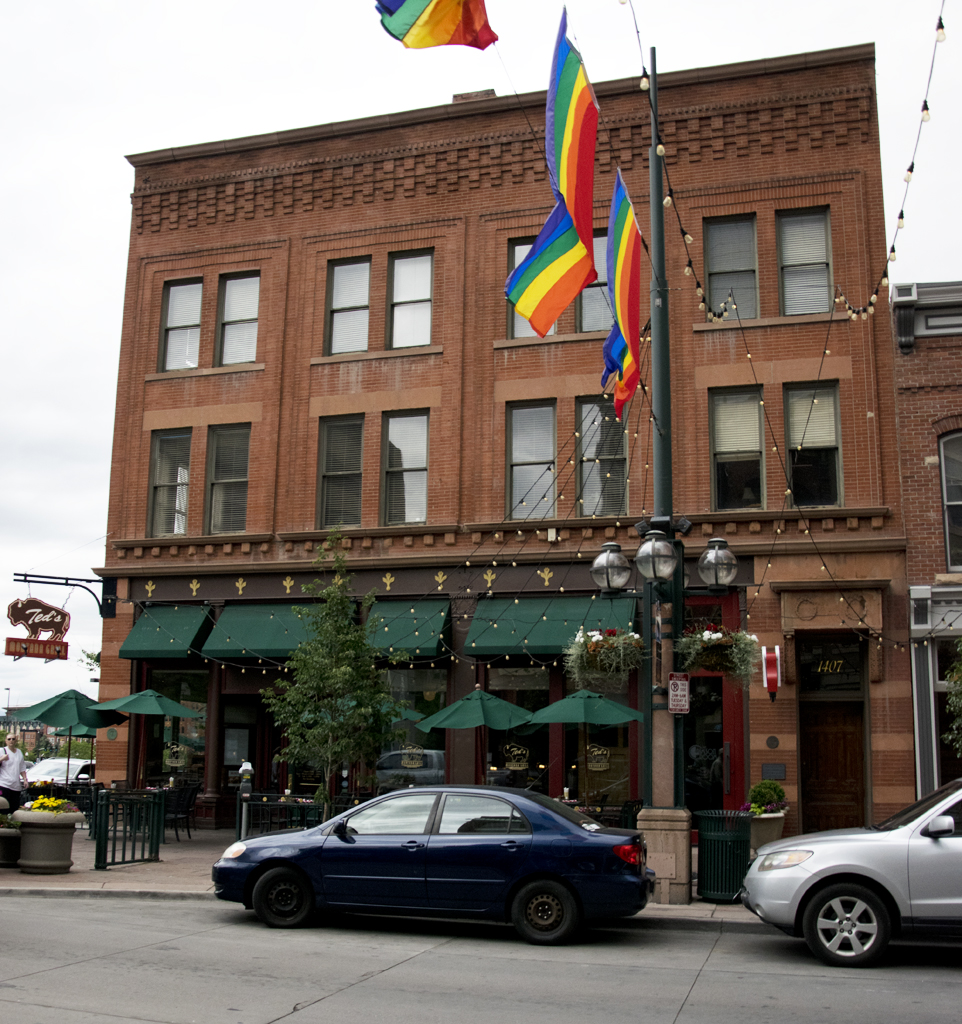 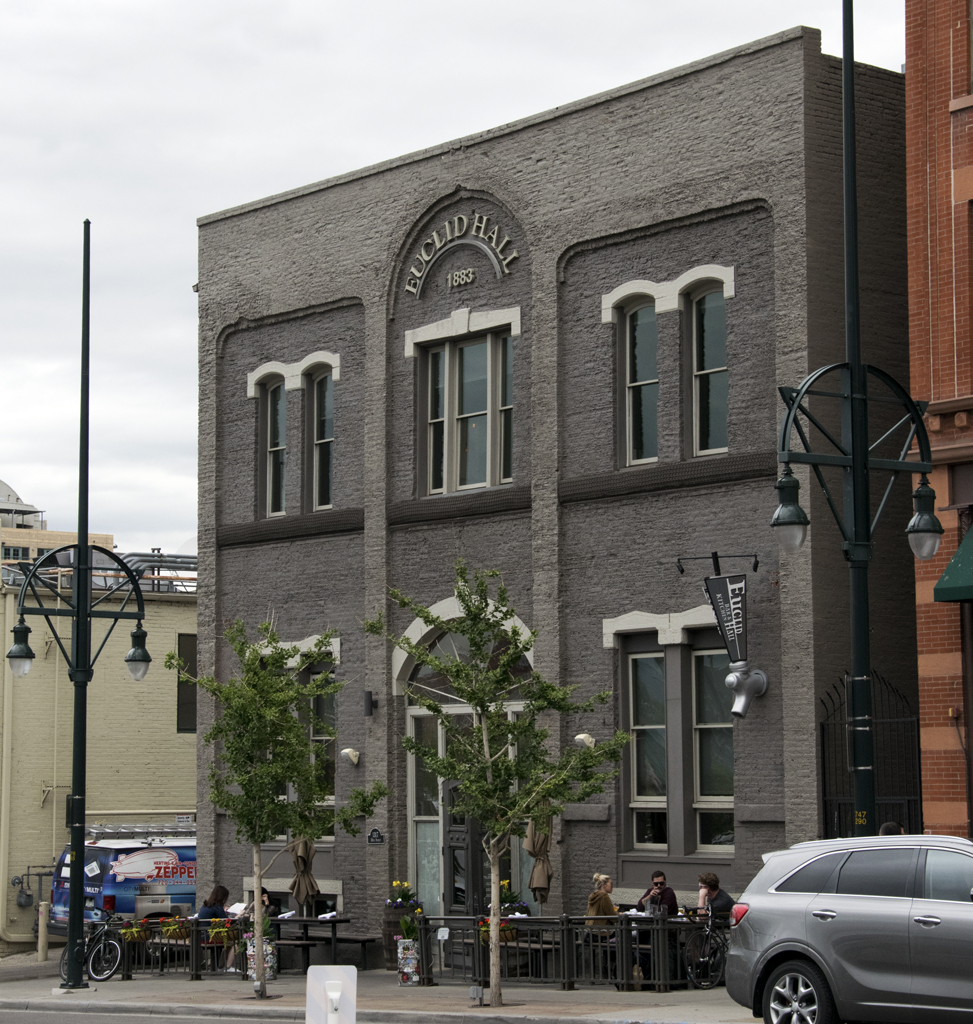 Just around the corner from here is Euclid Hall Bar and Kitchen. Its website has this to say about its history:

Built in 1883 as a house for Dr. Byron Albertus Wheeler, Euclid Hall has been home to the Masons, the Colorado Women’s Relief Corps, The Cootie Club, Maudie’s Flea Market and is even rumored to have once been the very fancy headquarters of a brothel catering to government officials, law enforcement and members of the media. Perhaps its most memorable occupant was Soapy Smith’s Eagle Bar which operated from 1977 through the end of the century. Named after legendary con man and early Denver personality Soapy Smith, the bar was a long-time gathering place for good food and live entertainment.

Denver’s City Hall was right across the street and it was in front of Euclid Hall where the City Hall War of 1894 was fought when Governor Davis H. Waite tried to replace the corrupt police and fire commissioners who refused to leave. Waite called in 400 militia troops and they were challenged at City Hall by a force lead by Soapy Smith, a hefty case of dynamite and other leaders and members of the underworld. The standoff attracted more than 20,000 people to this corner. The governor stood down, took his case to court and lost, thus the underworld prevailed and skid row remained.

There is just no end to interesting stories in Denver!

Across the street from Euclid Hall at the beginning of the Larimer Street Bridge heading into Auraria is this bell: 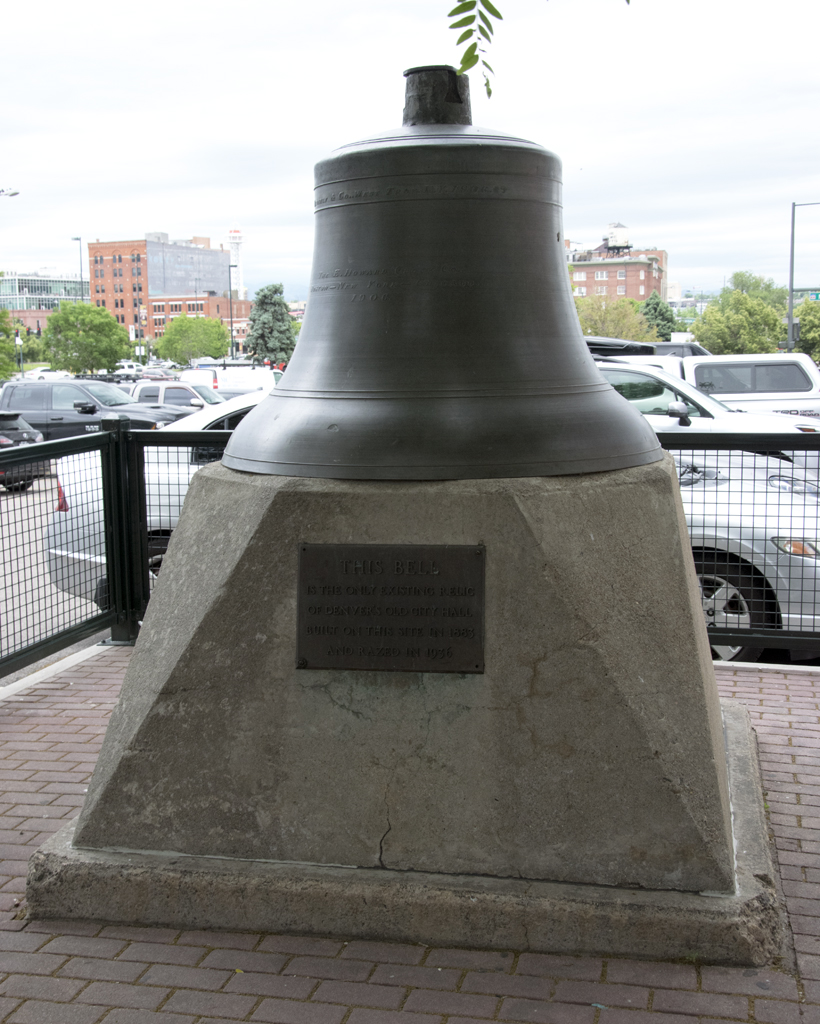 Its inscription says, “This bell is the only existing relic of Denver’s old City Hall built on this site in 1883 and razed in 1936.”

Here’s my favorite doorway, the entrance to the Crimson Room jazz bar: 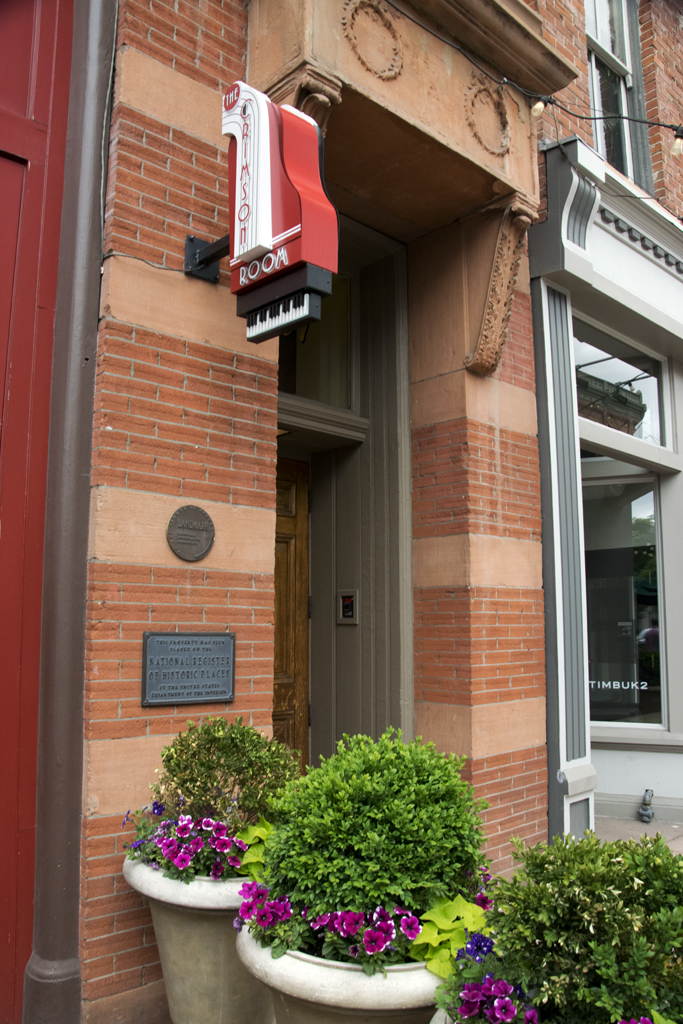 The Noel Building, built in 2003 to house the Capital Grille, stands on the former Noel Park, named for local historian, Thomas Noel. His nickname is “Dr. Colorado”, and I’ve seen him many times on the Rocky Mountain PBS History Colorado series. 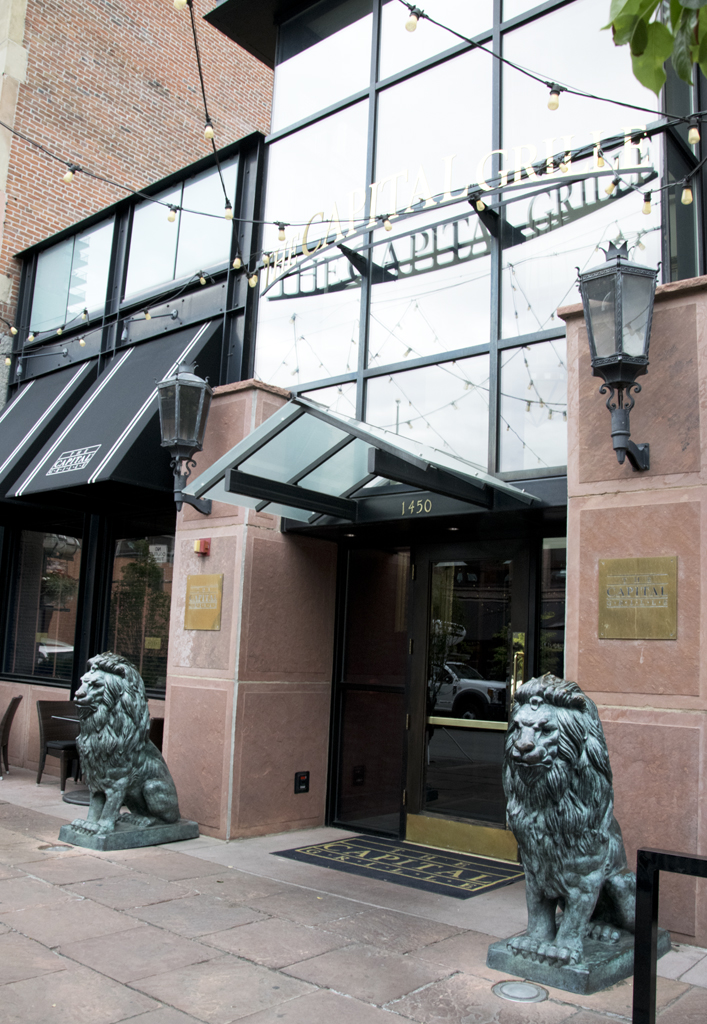 A butcher named George Kettle built this archway which leads to the Kettle Arcade. Note the wonderful mural on the ceiling of the archway. 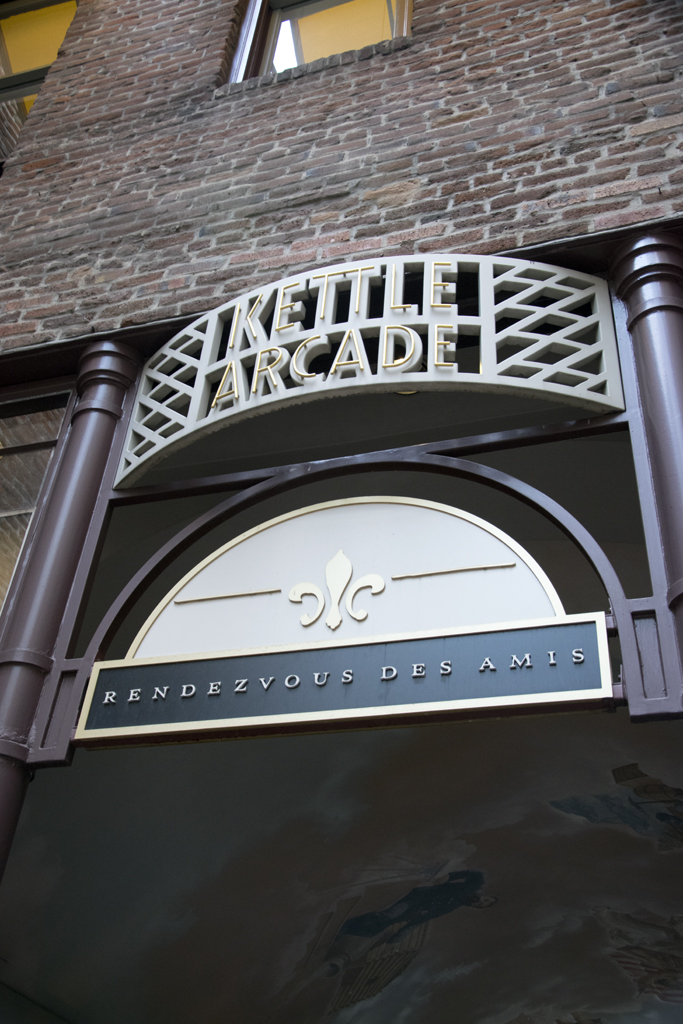 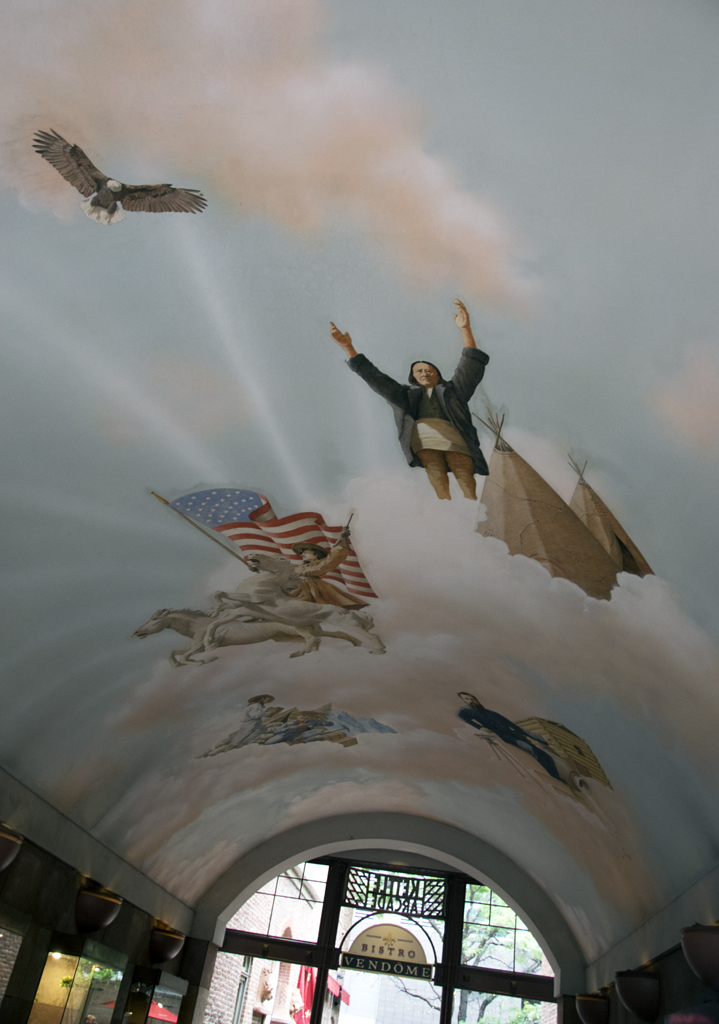 Here’s the courtyard on the other side of the archway: 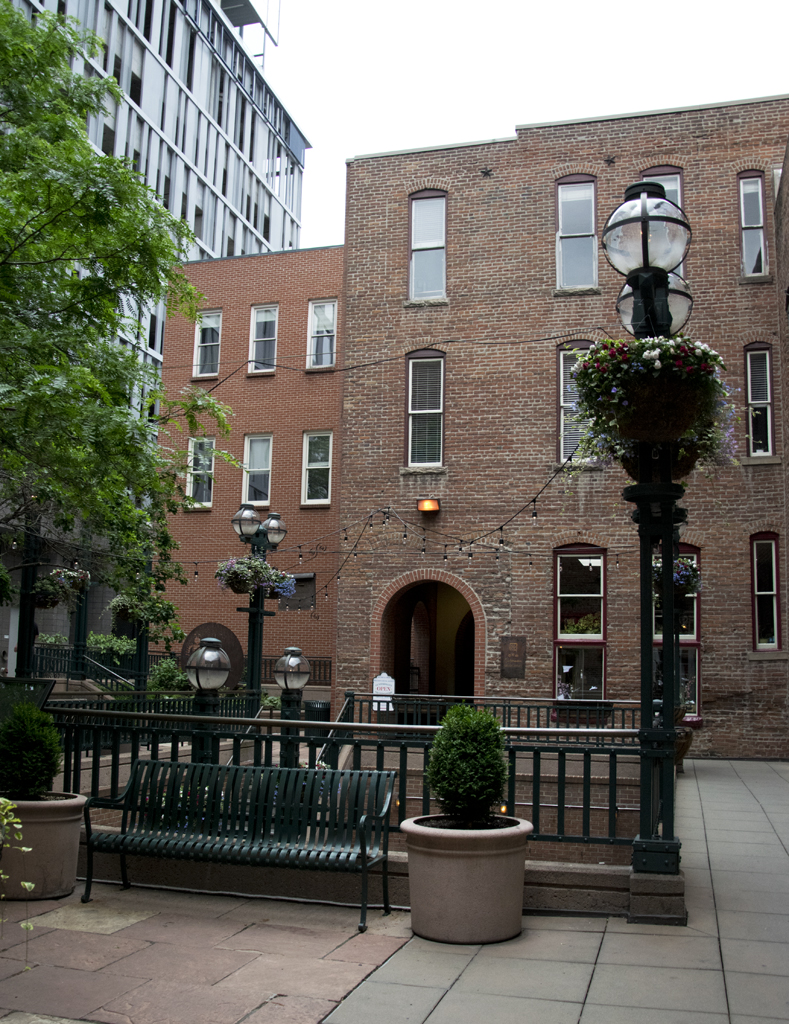 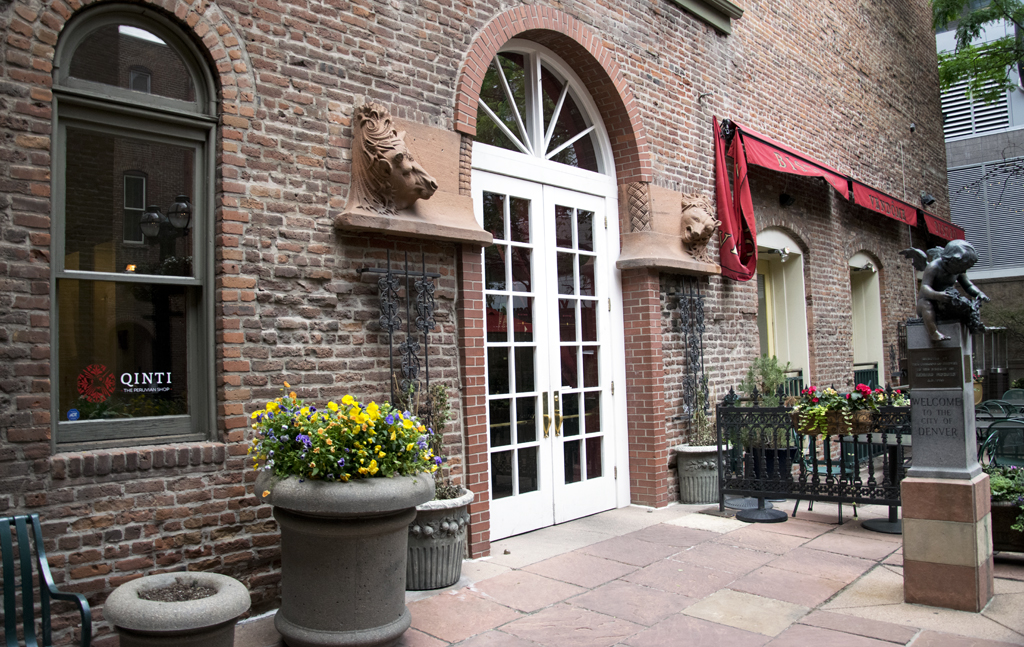 In the archway used to be the shop of a cabinetmaker who was charged with making Denver’s first coffins. There’s a claim to fame!

Downstairs under the archway is a bar named for Green Russell, along with a couple of restaurants: 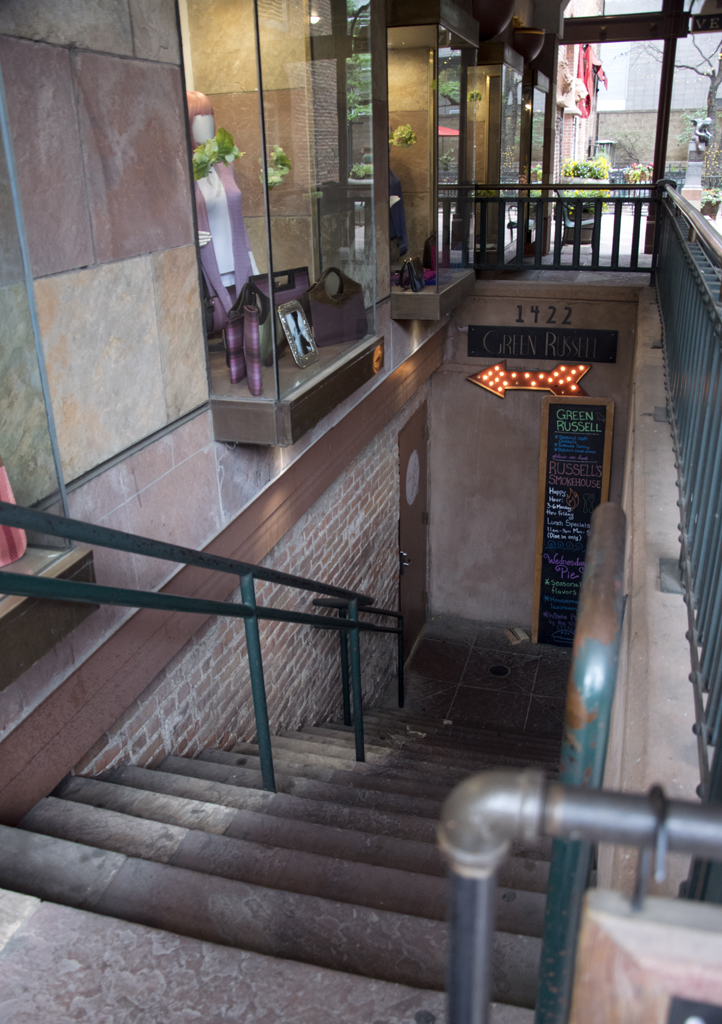 In this shot you can see what might have happened to Larimer Street if the urban renewal folks had gotten their way. See the high-rises just on the other side of the square? 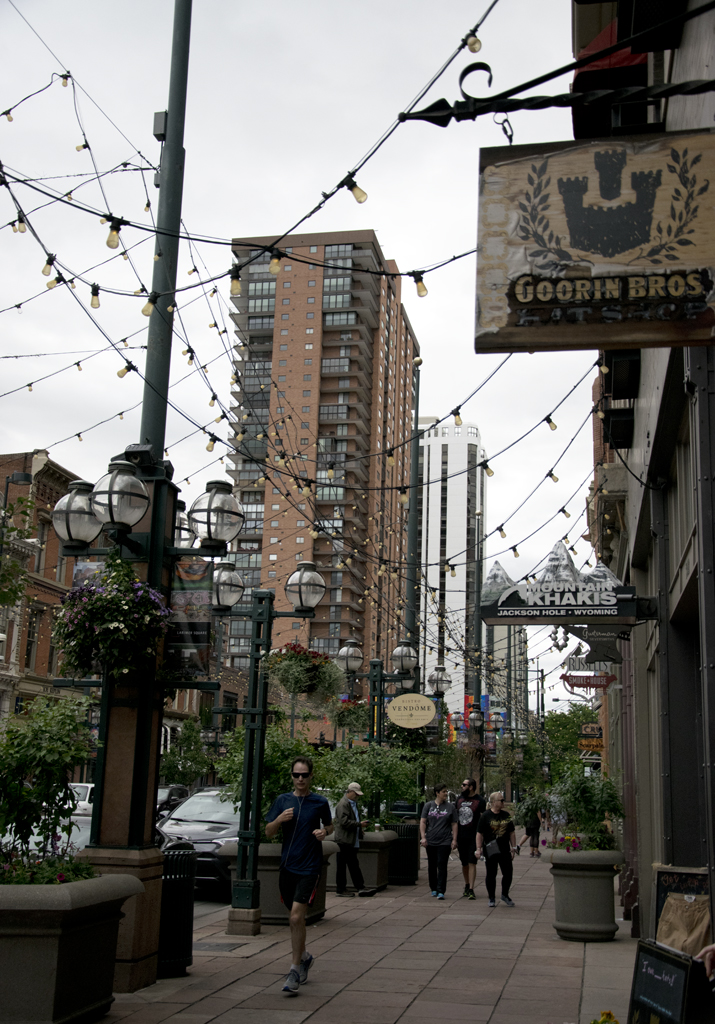 While I was there, I stepped into a storefront that had historic photos of Larimer Square and the local area through the years. A young man there, a recently-graduated architect, told me that there is a movement to “improve” Larimer Square, due to the instability and aging of some of the original preserved structures and also due to some real estate developers who want to add tall buildings to the neighborhood and make other changes. He mentioned that the original preservation project moved the building facades back from the street about fifteen feet, and that this storefront existed to encourage locals to give their opinions about what they wanted Larimer Square to be/become. I voiced. I don’t want it to change and I think real estate developers need to keep their paws out of it. But I do want the preserved square to remain preserved.

One of the suggestions I agree with wholeheartedly is that they should make the street a pedestrian zone, which it is not at present. On several occasions during the year they block off the street and show movies or have festivals, etc. The young architect expressed surprise that the locals would want to close the street to traffic. He also gave me the impression that he considered Dana Crawford’s efforts outdated. I totally disagree. Good thing he was pretty. It will be interesting to see what happens there. Let’s hope it’s an improvement, not a ruinous project. 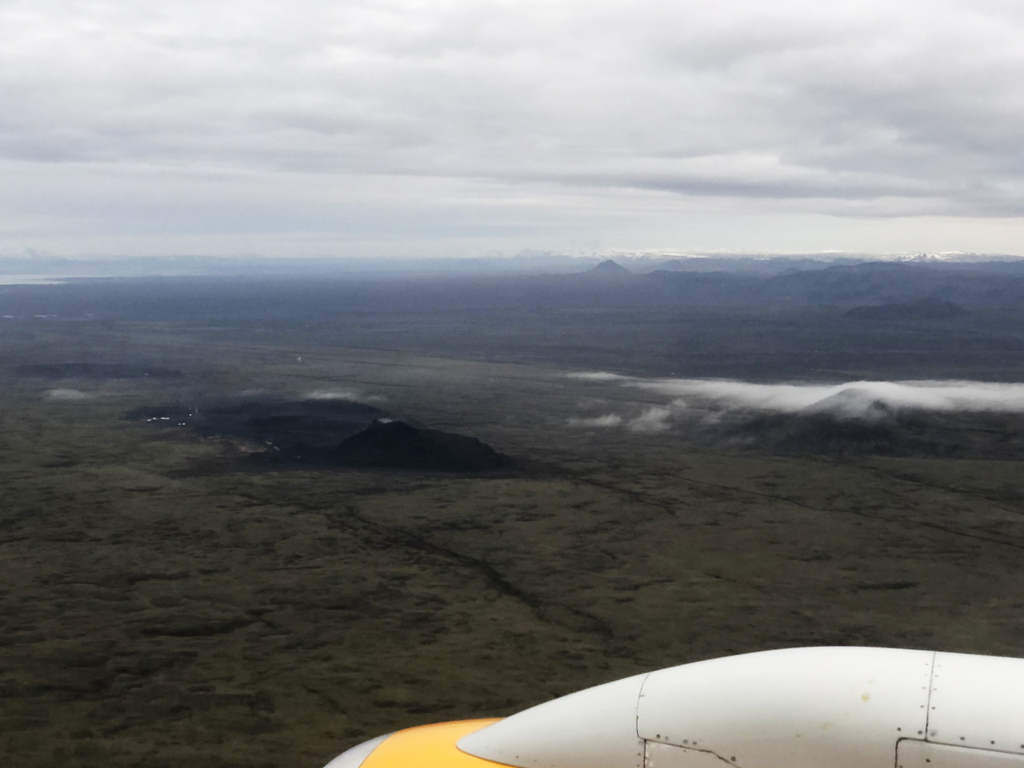