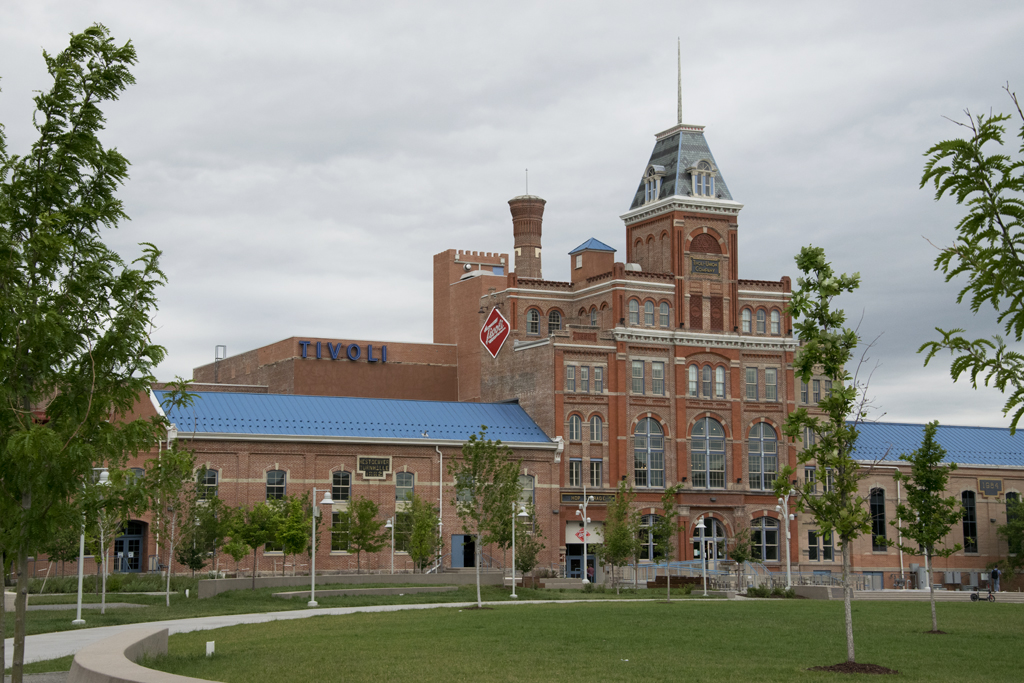 This week I’m building on a post from two weeks ago about Larimer Square in Denver, plus the post last week about the adjacent Auraria neighborhood. If you recall, that neighborhood was destroyed by flood, was razed and has since morphed into a shared campus for three colleges in Denver.

However, one of the structures that still remain from before the 1965 flood is the old Tivoli Brewing Company building. 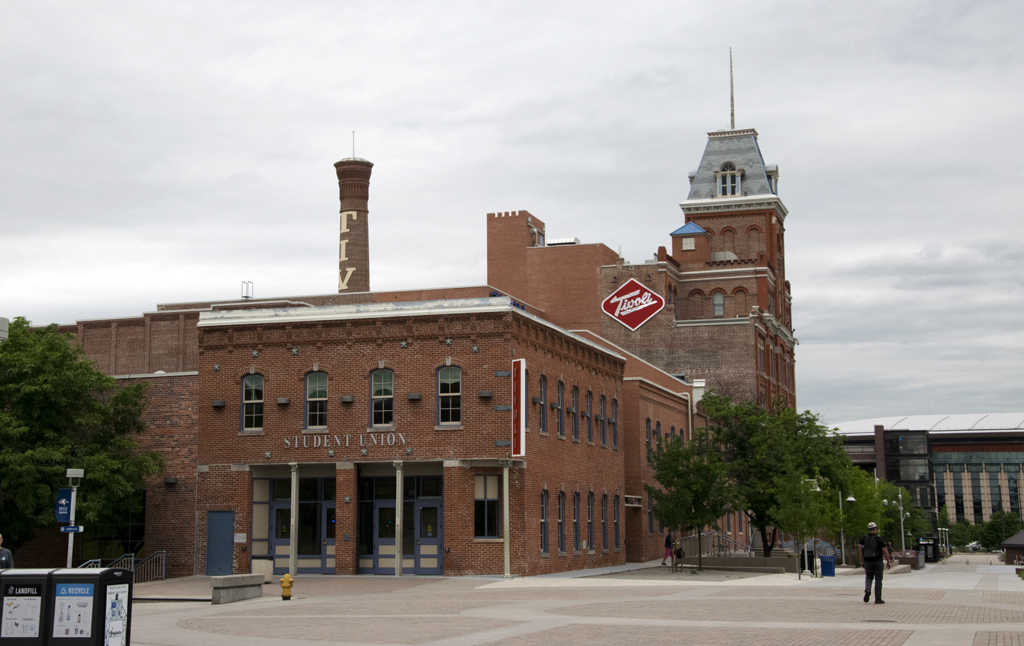 The building dates from 1864. It has a long and storied past, though, as you’ll read below. 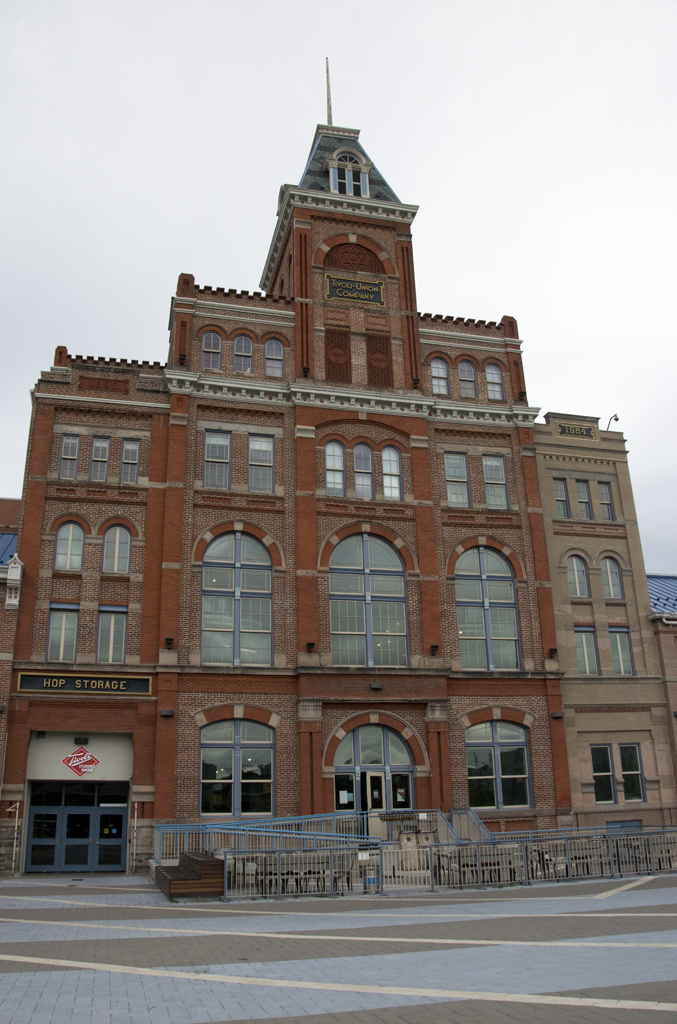 The brewery was actually founded in Auraria in 1859 by a guy named John Good. It was in a different building, though, since this one didn’t exist yet. A little later, he sold part interest to Frederick Solomon who owned Rocky Mountain Brewery (RMB). Twelve years later, Phillip Zang bought RMB and renamed it Zang’s.

The best name in this story is Moritz Sigi, who had opened Sigi’s Brewery in 1864. He’s the one who built this wonderful building. Here’s a picture of it from back in the day (maybe 1940s?): 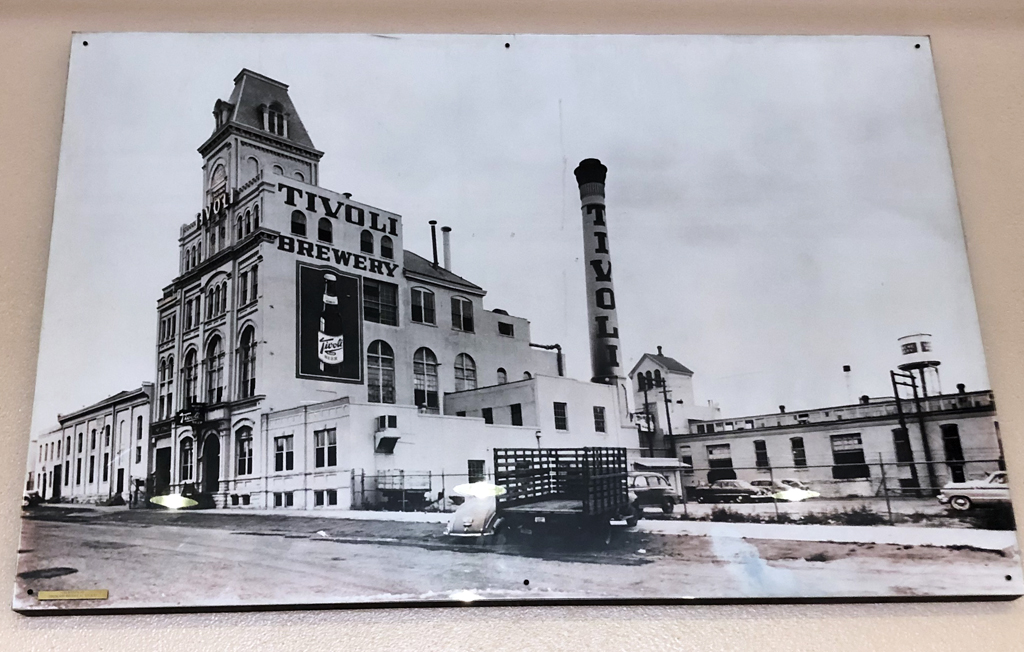 Ten years later, Sigi died in a horrible accident involving a horse and carriage that overturned when barking dogs startled his horses. The way it’s mentioned in all the histories I read, it must’ve been a big hairy deal. He was only 43 years old.

A few years later, Max Melsheimer bought and renamed the brewery to Milwaukee Brewery. That was in 1879, three years after Colorado entered the Union. Melsheimer, who made most of the improvements to the property, borrowed money from John Good for new copper kettles and a grain tower, but Good foreclosed on him in 1901. Good then went into partnership with Union Brewery to form Tivoli-Union. This is the first time the operation bore the Tivoli name, which Good chose because he loved the Tivoli Gardens in Copenhagen.

Guess what? Prohibition, 1920. Most breweries closed, but Tivoli-Union managed to stay afloat by producing a very low-alcohol “cereal beverage”.

I know he had to be quite relieved when Prohibition was repealed in 1933. Tivoli stayed in the family until 1965 when the final heir, Loraine Good, died. Carl and Joseph Ochiatto bought the business just before Auraria flooded. Production halted then and labor strikes a few years later complicated the matter. The brewery closed in 1969.

Fortunately, the building was placed on the National Register of Historic Places in 1973, so no one could tear it down. All the buildings were eventually brought under a three-story atrium. It sat empty til 1982 when it reopened as a bar and a kind of mall. Fortunately, the campus was established in the ensuing years (again, read last week’s post for details). The building became the Student Union in 1994, which it still is today.

Here’s the entrance to the Student Union: 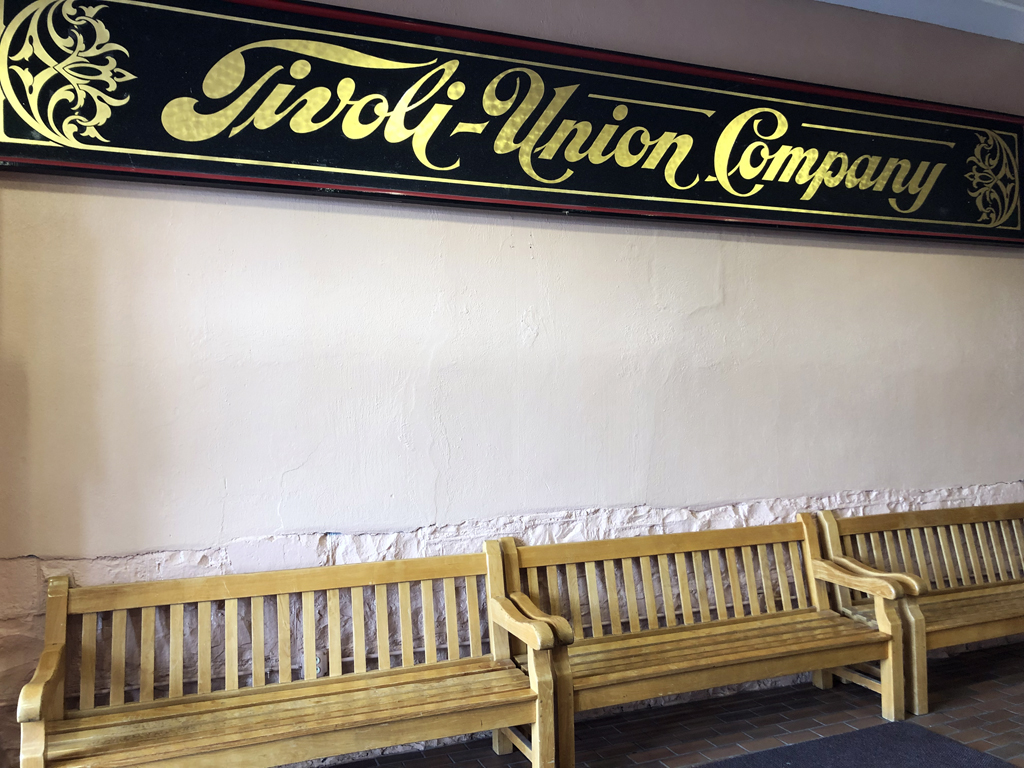 Here you can see the atrium: 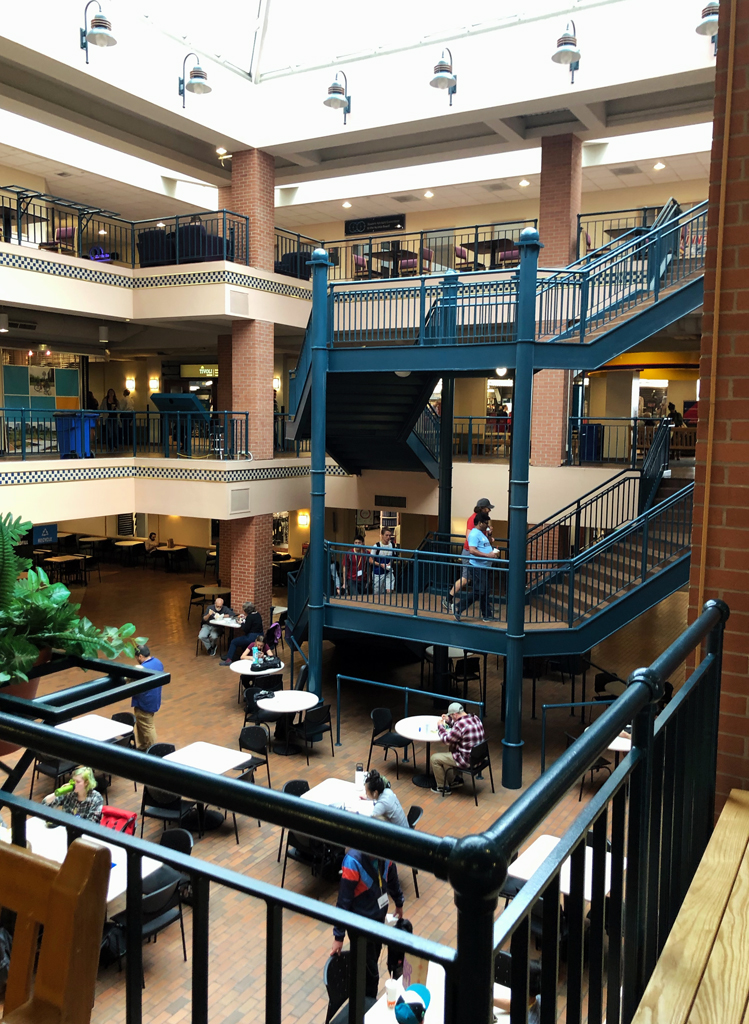 A walkway outside of one of the old building walls: 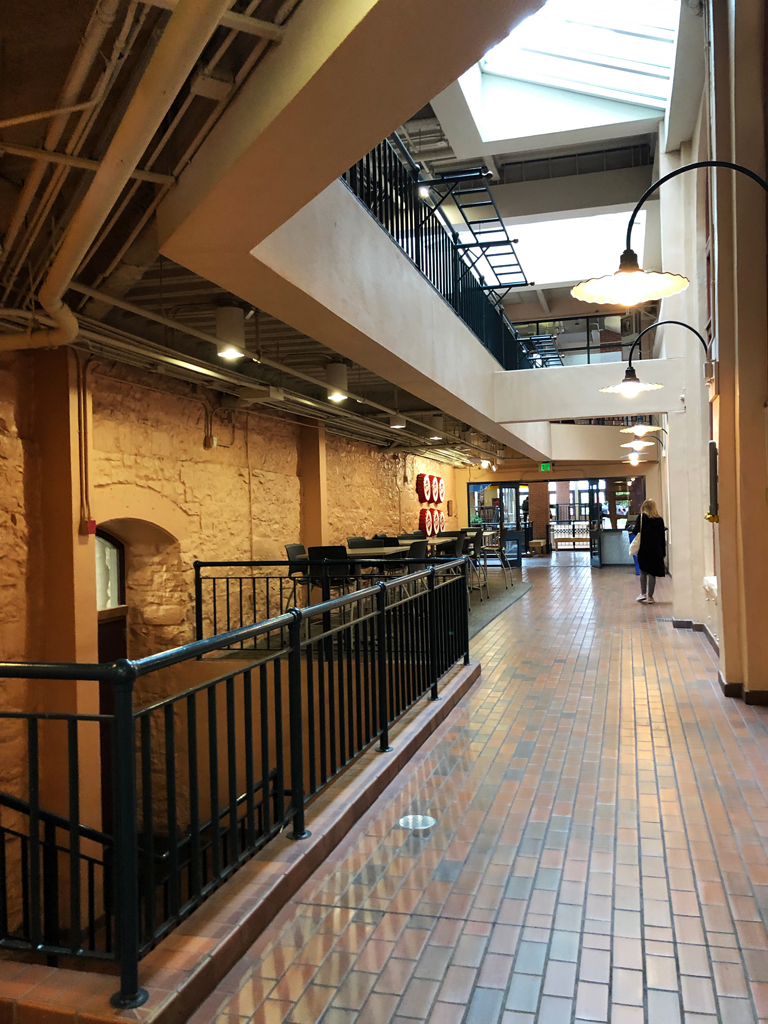 The “malt tonic” in the sign below would have been the low-alcohol “cereal beverage”: 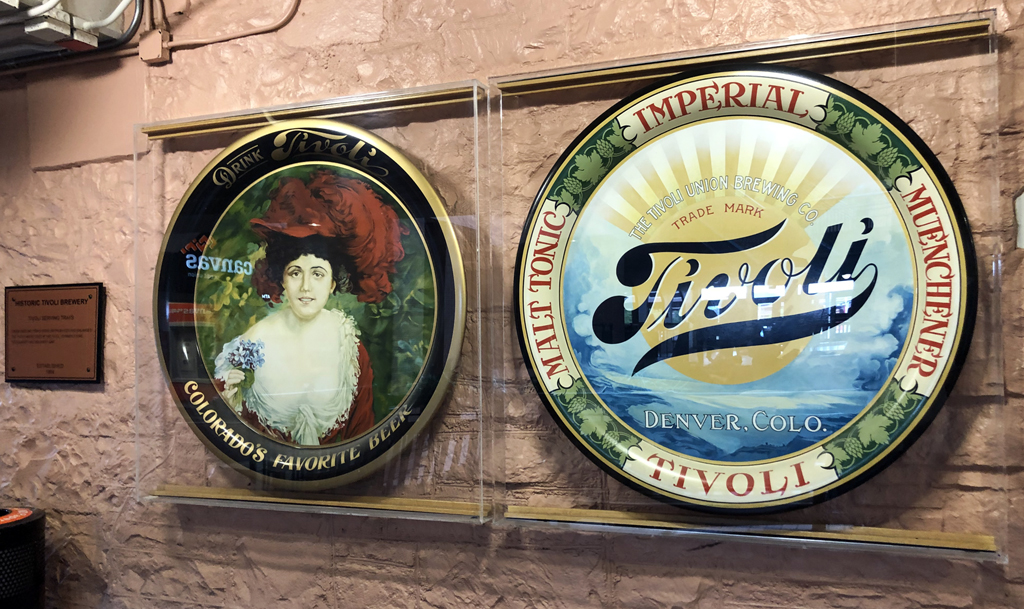 And a study room: 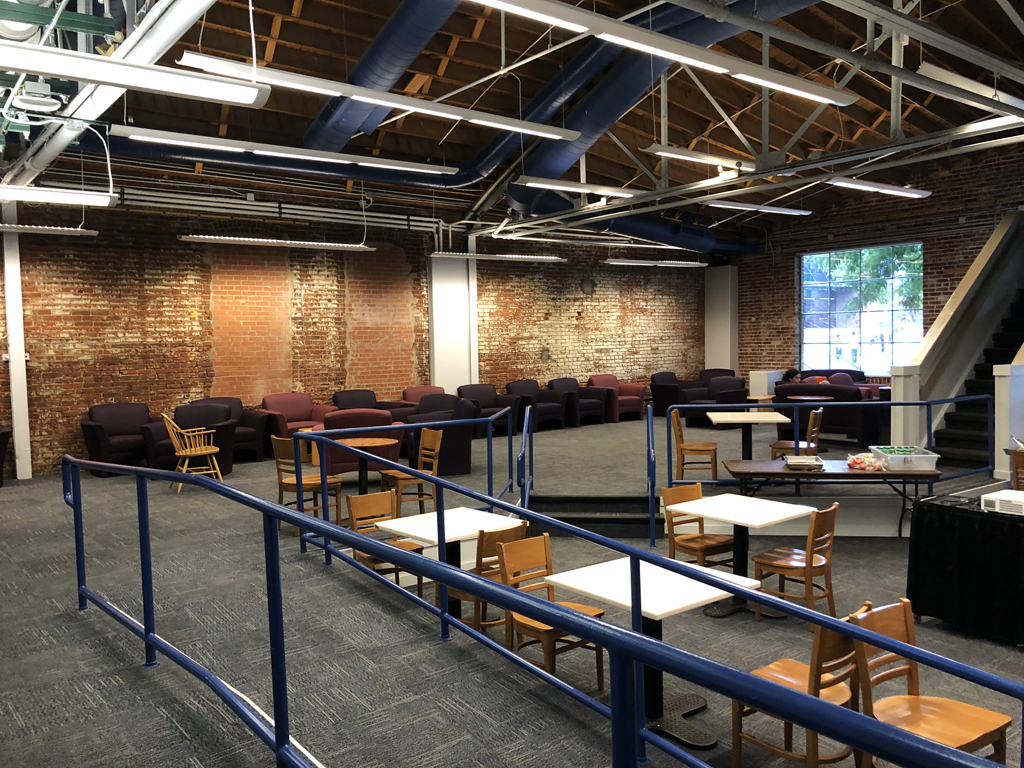 Corey Marshall bought Tivoli and other historic beer brands in 2012 and reopened the brewery in the original building in 2015. They have restored the brewery itself and opened a bar and grill taproom as well: 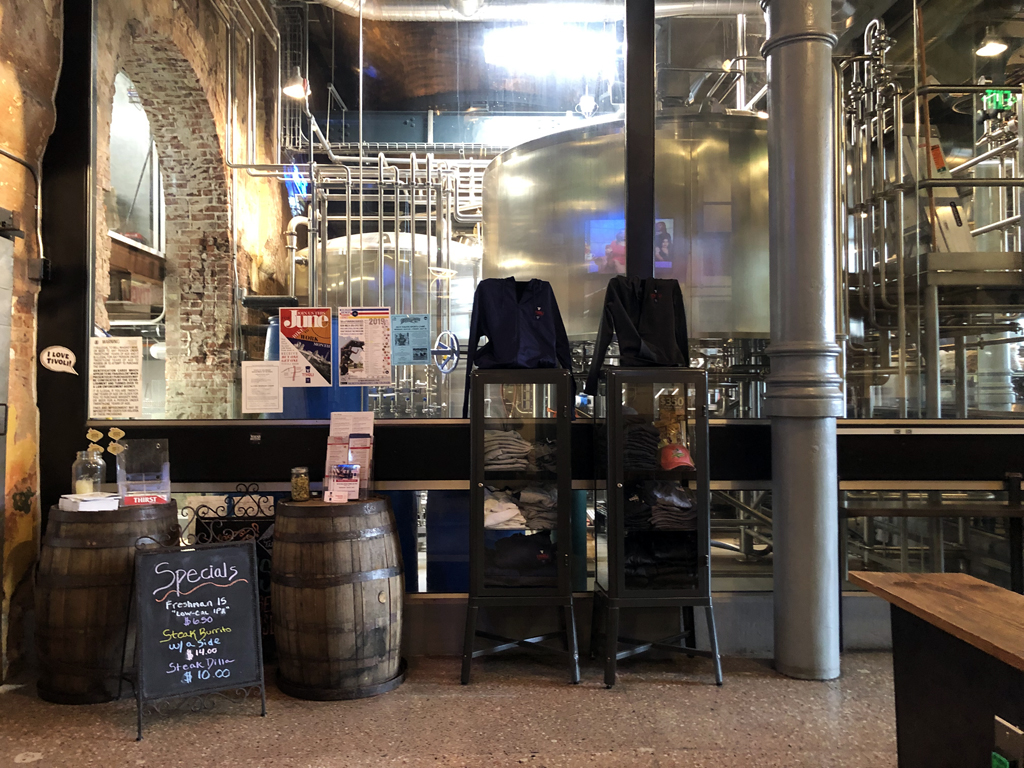 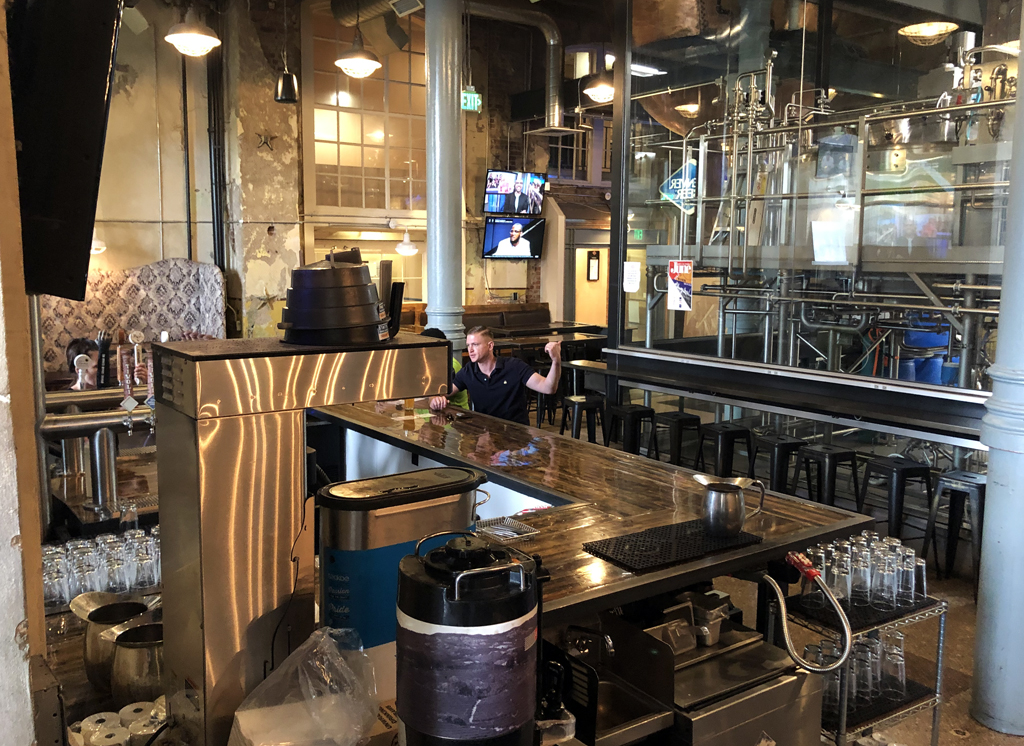 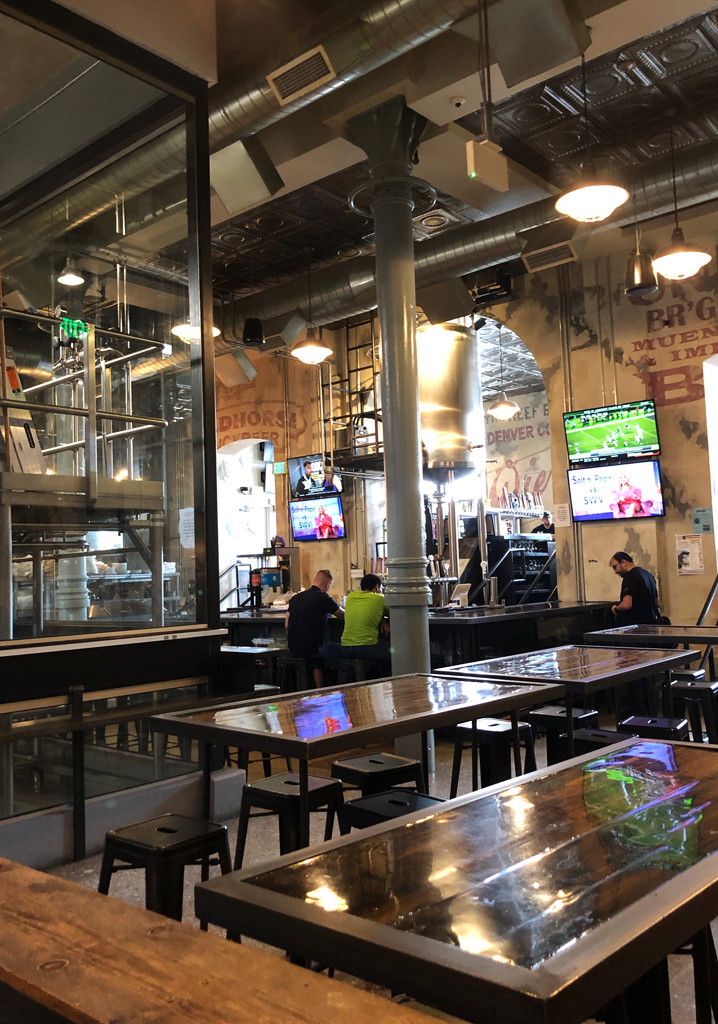 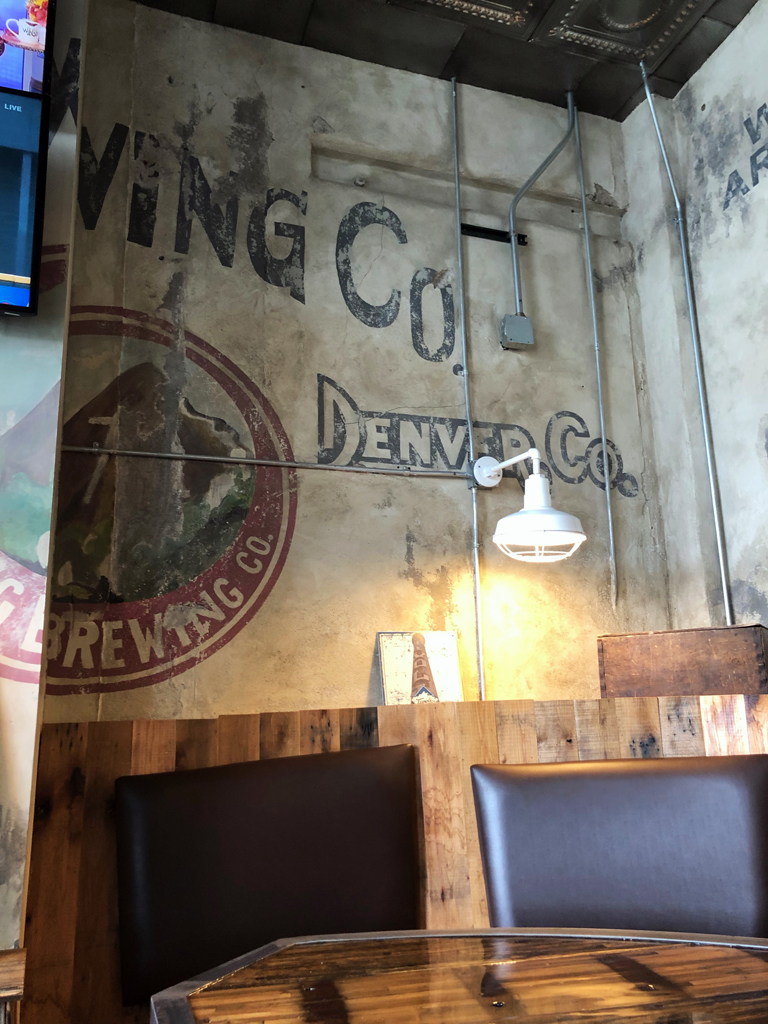 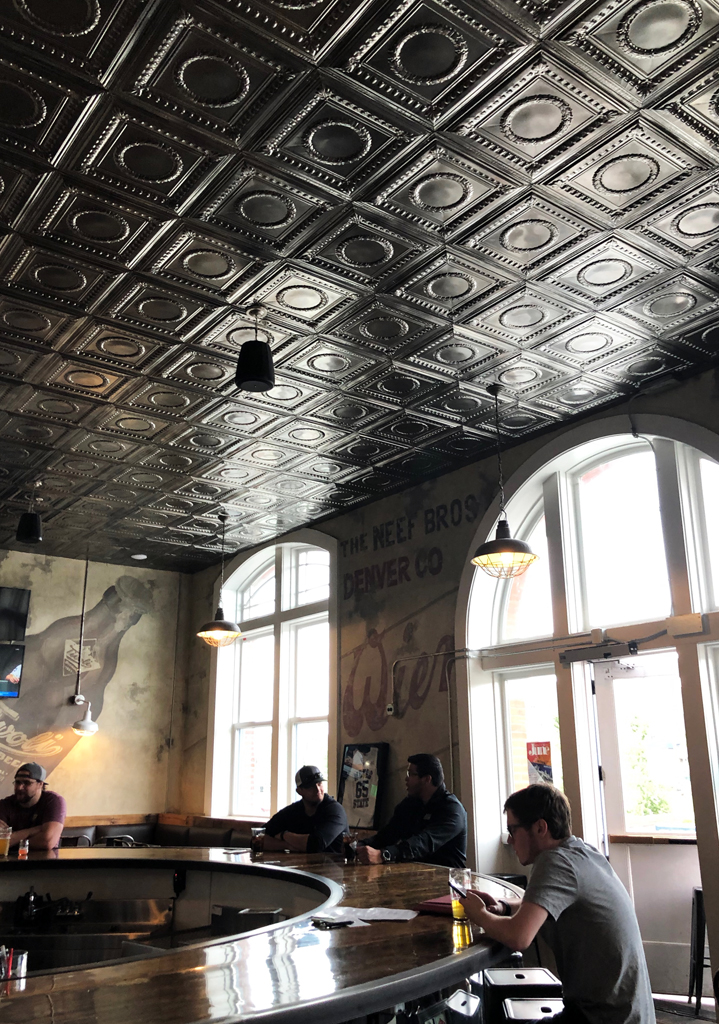 I saw this sign on an attached building of the brewery: 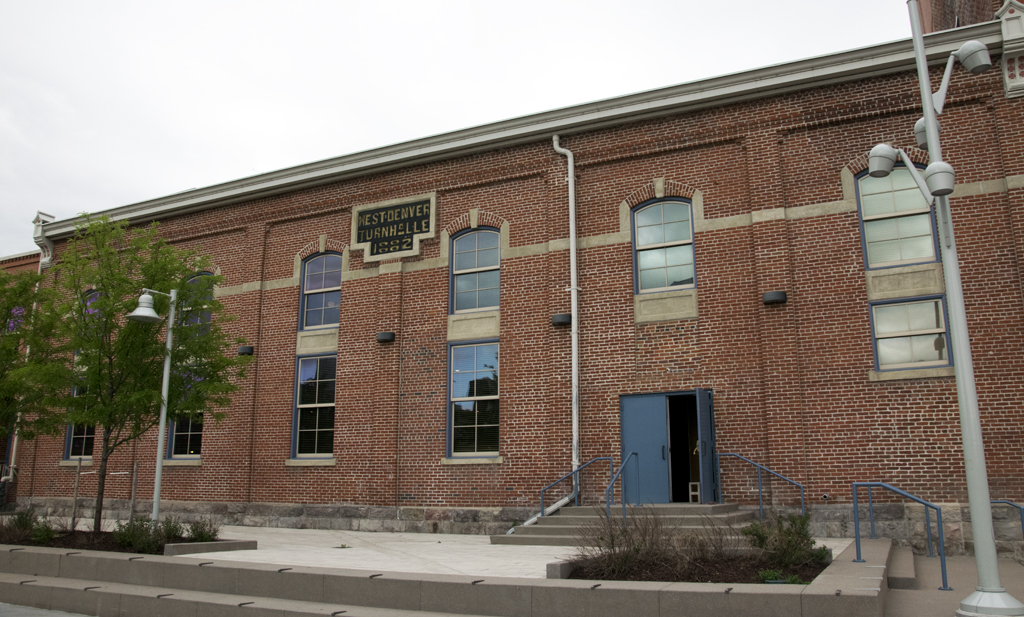 “Turnhalle” is German for “gym” (literally, “gymnastics hall”), so I was curious about that. Melsheimer built this addition during his ownership as a meeting place and concert/lecture hall for the local German gymnastics club, who also held many German cultural events, including shooting competitions and an Oktoberfest. The club’s HQ was the Tivoli, so it made sense a German owner would accommodate them. Today it’s a ballroom that you can rent for your own events. The day I was there, some sort of reception was being held inside. 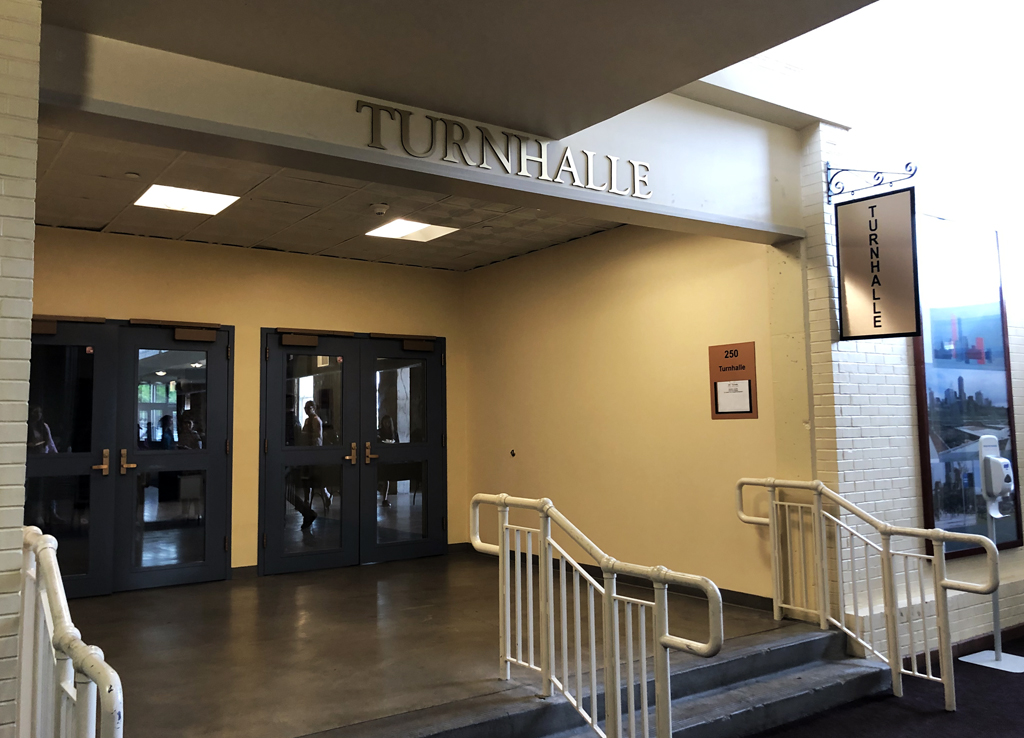 So there you have it. I have tasted Tivoli beer in a few places locally–they distribute it around here–and it’s German style, which stands in contrast to the really hoppy, bitter craft beer most places serve. I like it very much.

Stay tuned next week for the next stop in my Auraria tour! 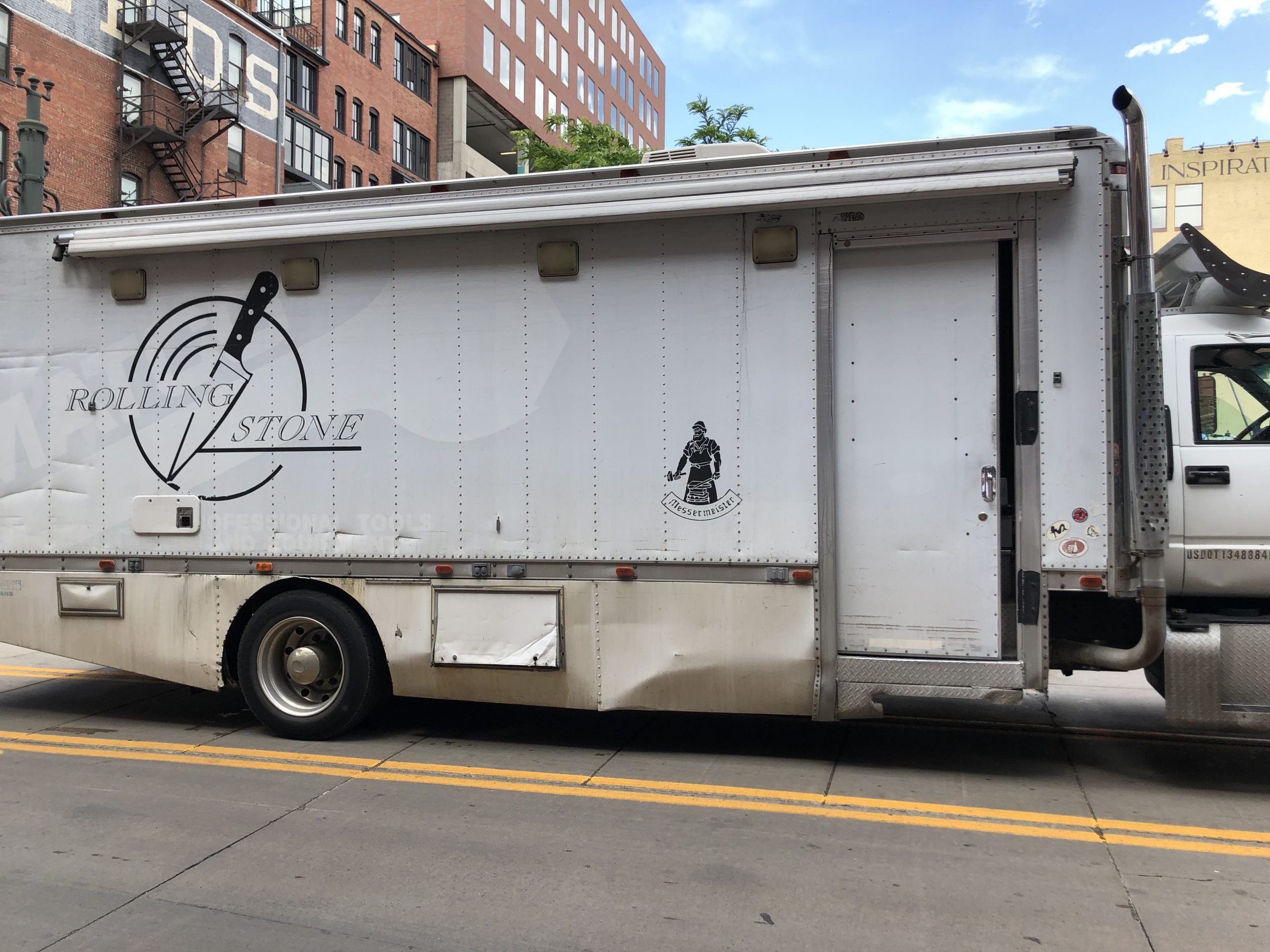