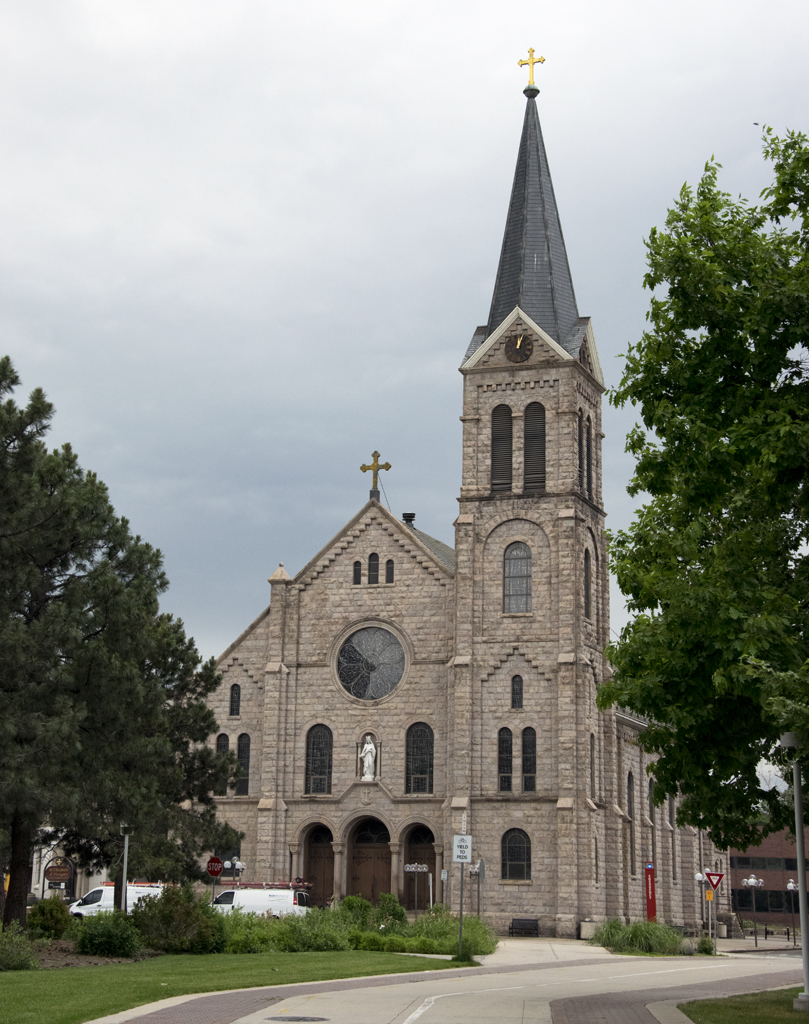 Today, another installment of the series wherein I give you pix and info about my excursion to Auraria in Denver. So far I’ve told you that the neighborhood is now a shared college campus. Also, I gave you some interesting background about the historic Tivoli Brewery, which resides on campus, as well as St. Cajetan‘s building, which is actually not a church anymore but an event center. To get a rounded picture of Auraria, check out those links!

In this post, I describe another historic church, St. Elizabeth of Hungary. It’s located on the edge of the campus and very near Denver’s Performing Arts Complex. Unlike St. Cajetan’s, St. Elizabeth’s is a functioning Catholic Church. It was closed the day I was there, but I have a few good pix of the outside: 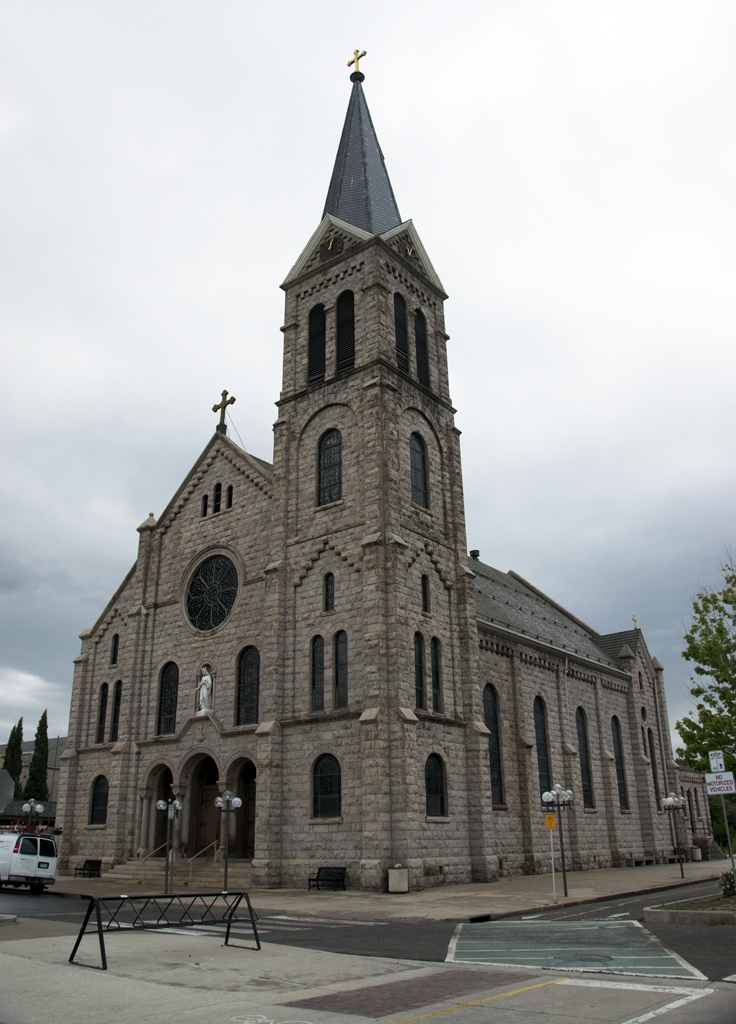 Here’s a shot from behind. I actually walked up to it from this angle. You can see the Performing Arts Complex in front of the skyscrapers in the background. 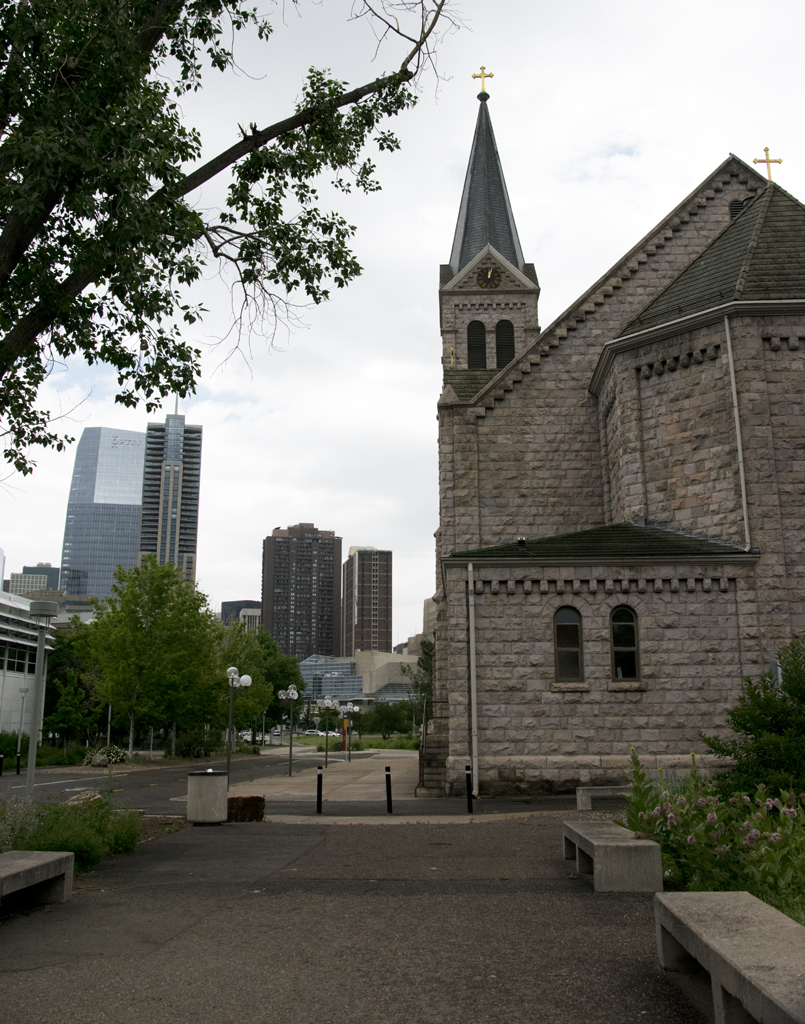 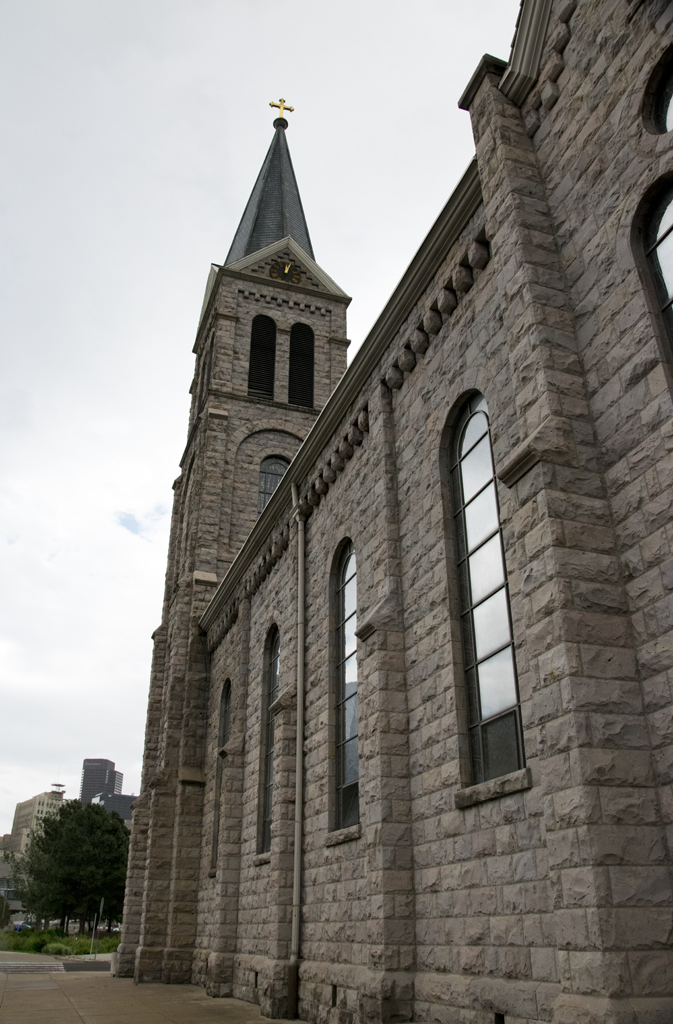 Despite its name, the St. Elizabeth of Hungary church ministered originally to the German immigrant population in Denver (Hungary was St. Elizabeth’s home). The parish was established in 1878, making it the second Roman Catholic parish of Denver. Originally it was operated by Franciscan friars, then the Capuchin monks, and then it was sort of juggled among a few Catholic organizations in Denver. Interestingly (to me) is that, from 2003 to 1016, the building was shared by Roman Catholics AND Russian Byzantine Catholics. The church’s website states that, these days, it’s “a mission of the Cathedral Basilica of the Immaculate Conception”. Whatever that really means!

During the urban renewal project in the 1970s, preservationists managed to get St. Elizabeth’s on the National Register of Historic Places and the Denver Landmark Preservation Commission list. These acts saved the building from the bulldozer. Once the campus was established, St. Elizabeth’s became the campus chapel. They tore down some old buildings that belonged to the church grounds to build a student center in the late 1970s. When they removed the cornerstone from the old church school, they found Michigan J. Frog! No, just kidding – they found copies of three newspapers – The Colorado Journal (in German), The Daily News and the Rocky Mountain News – all from 1890.

As an aside, there used to be another church in Auraria, St. Leo’s. It was built when the Irish immigrants began to crowd out the Germans in St. Elizabeth’s. The Germans were miffed at this, and, long story short, St. Leo’s was established for the Irish. However, St. Leo’s was demolished in 1965 after the major flood of the area followed by urban renewal. Preservationists might have saved it if someone had moved to get it on the National Register or similar. Too bad.

Anyway, back to St. Elizabeth’s. There was a smaller church prior to this structure. The current church was built in 1898 and consecrated by a bishop in 1902. There are three bells in the tower. The third one was paid for with a donation from Philip Zang, who I mentioned in the Tivoli Brewery blog post.

It’s of Gothic/Romanesque architecture and cost a cool $69,000 to build back then, which equates to a little over $2.1 million today.

St. Elizabeth’s had a bit of drama in 1908. As forty-year-old Father Leo Heinriches conducted morning mass, he was shot and killed by Guiseppe Alia. Well, that guy was convicted and executed less than five months later, amid conspiracy theory rumors. Today the going sentiment seems to be that he acted alone and was mentally ill. Duh! There’s a plaque in the church where it happened. Check out this link for lots more gory details. And the doors were locked when I was there! Darn! 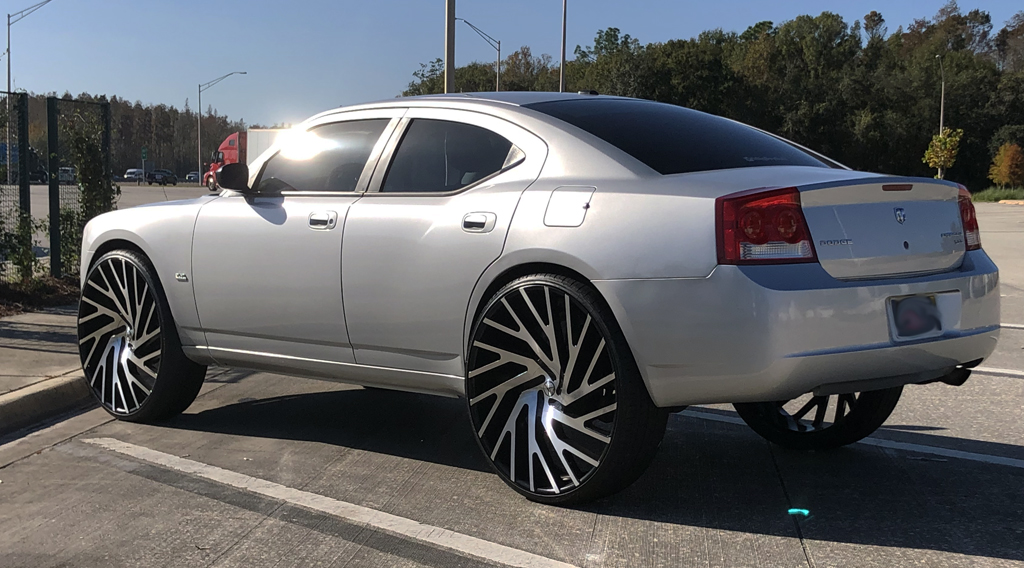