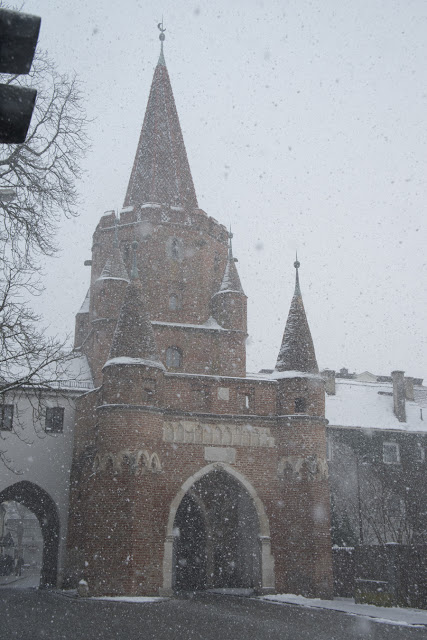 Which of my books do you own so far? Get another for your collection! Click here to buy any and all of them on Amazon.

Last week I left you just after my friends and I toured the Audi Forum in Ingolstadt, Germany. Ingolstadt lies on the Danube in southwestern Bavaria and is part of the Munich administrative area, although it’s fairly far away. If you can believe Wikipedia, the earliest settlement at Ingolstadt started before the 800s and was granted city status in the mid-1200s. It is the birthplace of the secret Illuminati society and is also one setting of Mary Shelley’s novel Frankenstein where the monster was created, although I didn’t see any unnatural beings lurking about that day.

After we left the automobile museum, we drove to downtown Ingolstadt, which, like most German towns, has a historic district and at least one big church. Here’s a shot of the historic main drag: 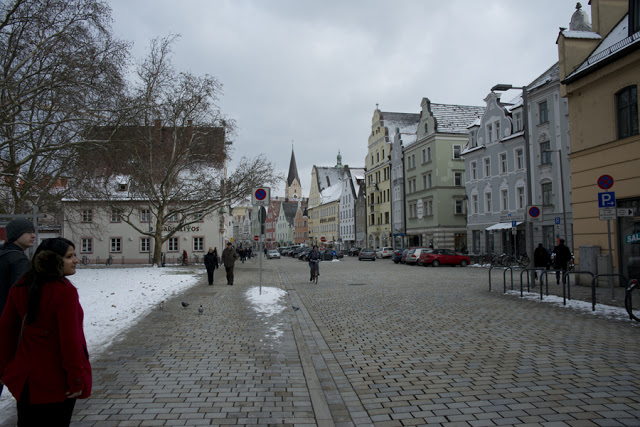 We found a likely-looking Greek restaurant and stepped in for a bite to eat. I got the German menu but my friends scored the English version. I so love the translations! This one had “Choppy” house specialties. We decided it meant “chopped.” 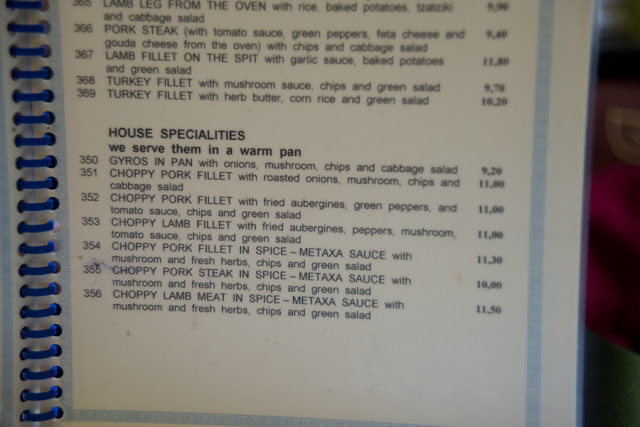 The interior design of the restaurant was newly refurbished and had wonderful sections of river rocks and natural stone adorning the archways. However, there was a rather disturbing naked Greek guy trying to throw something at us throughout our meal (I just realized that anyone googling “naked Greek guy” might be disappointed if my blog came up in the search results!): 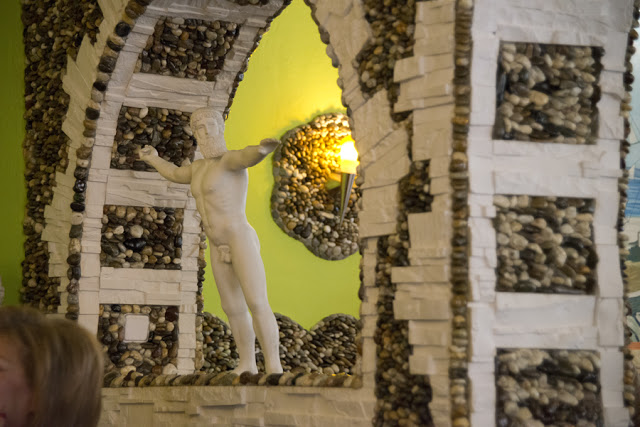 Speaking of our meal, I had what was probably the best gyros EVER! I don’t know what they seasoned the meat with, but it was delicious! The food was fresh and freshly made. The rice was tasty, too! 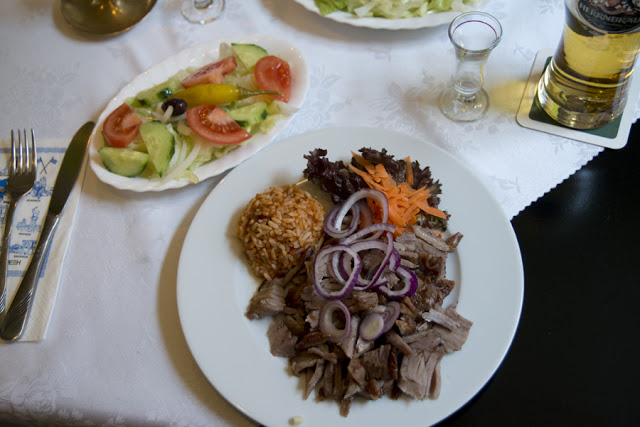 Which makes it doubly frustrating that, try as I might, I cannot remember the name of this place. I tried checking Google maps, but there are four Greek restaurants on that street!

We were entertained during our meal by the older couple at a neighboring table. The husband was into his cups and spoke loudly and often about his mother-in-law. I translated as much of his slurred German as I could for the table. The quote that first caught my attention was when he said “time flies but a mother-in-law is always slow to die.”

As an after-lunch activity, we dropped into the enormous late Gothic church nearby, the Cathedral of Our Lady, which dates from about the 1500s. It’s seven stories high with two great towers that are higher still. It was as beautiful on the inside as it was big on the outside. 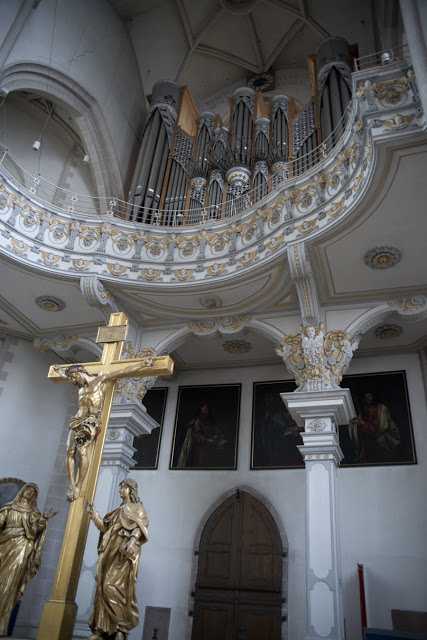 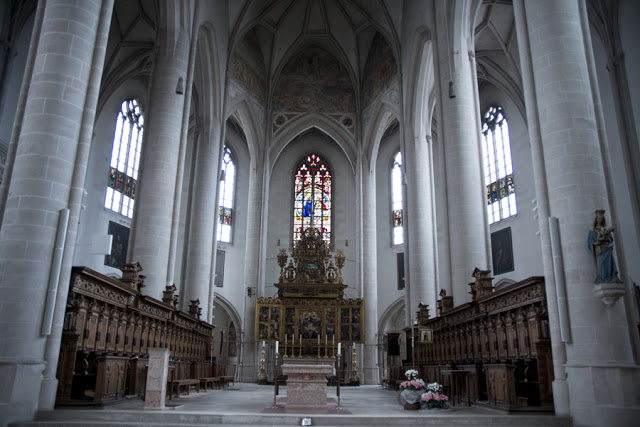 An addition to my church votive series: 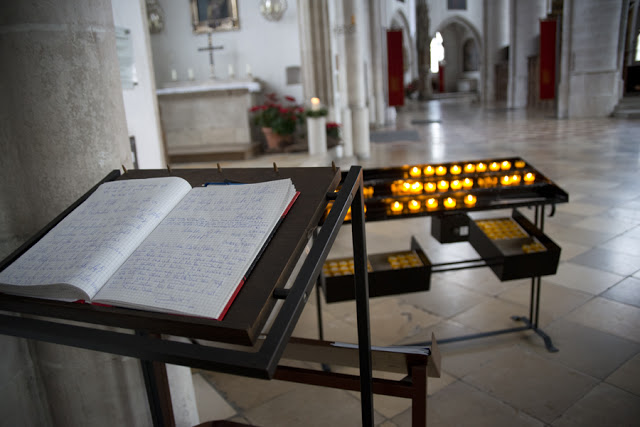 A small side room housed some gorgeous, bejeweled, gold monstrances and other church treasures: 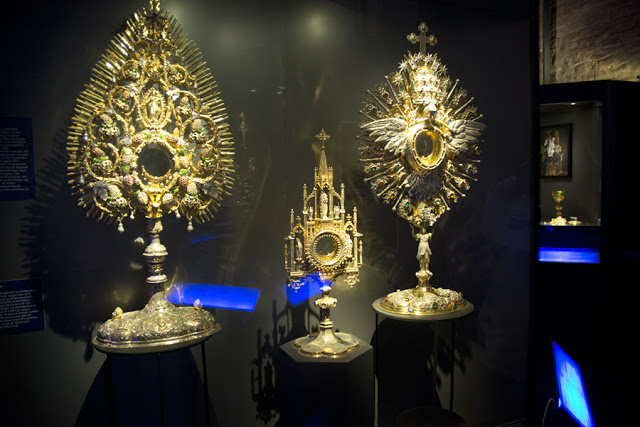 As we exited the church, it was snowing like the dickens! Large, fat snowflakes and small, delicate crystals were coming down heavily, which gave the town a wonderful look. Here is Carmela with her two animal friends in the snowfall. I accused her of Princess Leia syndrome. 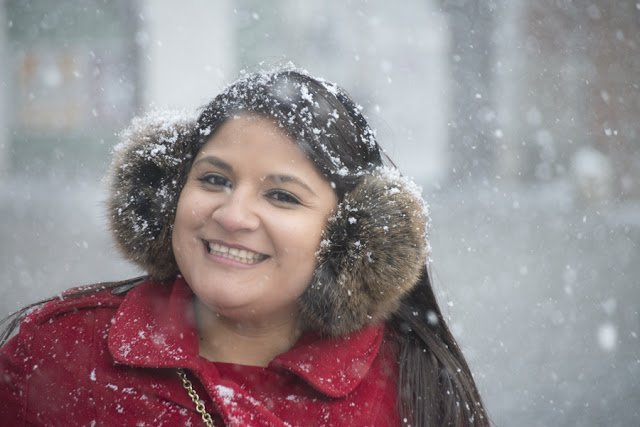 Ingolstadt’s most well-known landmark is the Kreuztor, or Cross Tower, built in the Middle Ages. The city had two rings of fortifications, and this gate was part of the second ring. If you walk through this gate, the giant cathedral is a little to the left. It was wonderful to see the gate in the snow!

After our Audi-ing and Greek dining and sightseeing, we were all pretty ready to head home. So we piled into the BMW and Ivan chauffeured us back to Bamberg. On the way, we planned out the activities for the next Saturday, which was for them to teach me how to make authentic Mexican food. I’m here to tell you, it was a success! 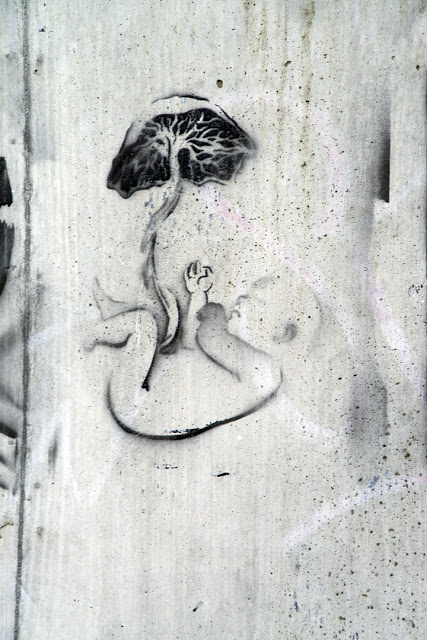