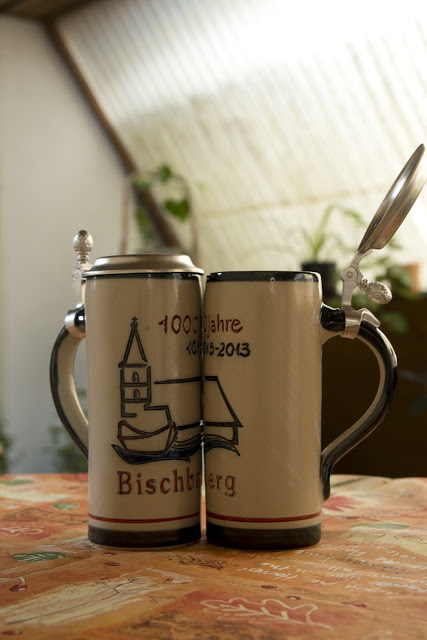 Shop all my books! I’ve written photo books, cookbooks, and other interesting stuff. Click here and buy them on Amazon!

You know that I teach English in Germany, right? If not, it’s probably your first visit to this blog. Either that or you’ve just not been paying attention! In any case, I live in a small village outside of Bamberg called Bischberg. It’s typically Franconian, which is a unique little portion of Bavaria.

Bischberg’s population runs about 4,500 and it’s more or less a bedroom community for Bamberg. However, it has its own identity and the people are very committed to their traditions. I’ve written many times about Bischberg’s award-winning marching oompah band and they have their own summer beer fest each year, complete with parade and so forth.

However, this year is special. Bischberg is celebrating its 1000th anniversary. That’s right, there are three zeroes in that number. The little berg was founded in 1013 and is one thousand years old!

There have been and will be many festivities throughout the year to celebrate this momentous birthday. Recently, back in July, there was a whole weekend devoted to celebrating the millenium milestone.

My husband James and I even went so far as to visit the town hall during the week and buy our own commemorative beer steins. They sport the logo of the thousand-year celebration and came with free pens and a tote bag each! I couldn’t get the whole logo in the shot on just one of the mugs, so I put them together so they would give you an idea of what the logo looks like. It depicts the church and a boat on the river. Note the real tin lids (deckels in German) – we got the upgrade:

On Friday evening the celebration opened with a small procession by the school children, ending at the beer tent. The buzz all week was that the big feature of the beer tent that night would be a whole ox roasted on a spit, or Ochsen am Spieß in German, which sounds like “oaks ahm shpeece.” I heard that phrase so many times during the week! Because everyone was so excited about it, I thought I’d better go check it out.

What a letdown! What a dried-up, overcooked letdown! I made a stop-motion animation out of the still shots I took of it.

It must have been cooking for days! I doubt it would have fed many folks. It’s a good thing that guy working so hard in the video was slicing beef and pork roasts that had been cooked in an oven somewhere else. I doubt they could even slice the poor Ochs! More like ox jerky. It reminded me of the turkey in National Lampoon’s Christmas Vacation!

But there was still Saturday. On the docket for Saturday was the “historical market.” The whole town, which is the immediate vicinity of my apartment, was to be blocked off to traffic and there were to be many booths and tents representing local businesses and historical guilds and such. One of my students was one of the organizers and she’d given me a few details. It sounded legit, so we decided to check it out, too.

On this particular Saturday, July 13, my husband and I were joined by our friends Carmela and Ivan for one final fling before the Army sent them scurrying to Virginia to leave us here all alone with no one to drink beer with.

Before Carmela and Ivan showed up, James and I attended the official opening of the market which took place about 20 steps from my apartment. The church choir serenaded us with the Franconian “national anthem” and a few other nice, welcoming songs: 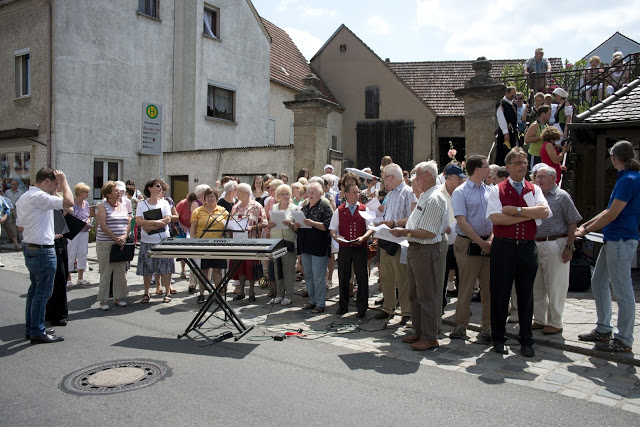 If you locate the smallish man in the front row wearing a red vest with gold buttons then count two people to the left, you’ll see my landlady. Eighty-seven years old and still sings in the choir! I gave her a copy of this shot and a few others I took that day. She ended up buying five copies for other people in the choir who’d seen them and wanted them! Neat!

After a couple more musical numbers from a youth band, etc., the opening speech was given by the town leader. If you’ve ever wondered what an actual Burgermeister looks like, that’s him in the black robe on the left: 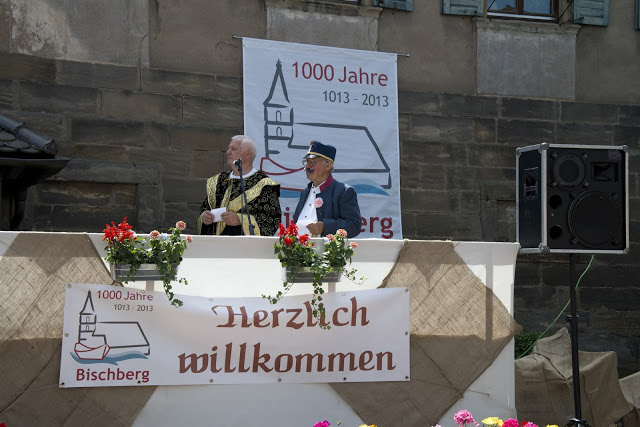 The other guy played the part of the town crier. He would ride an old bicycle throughout the market during the day and stop occasionally and make announcements. Yes, the ‘stache is fake!

Here’s a shot of the other three posing in front of the mascots of the thousand-year celebration. Note the giant figures are made out of round bales of hay. The hay is dressed up in the traditional fisherman’s guild costumes. Of course, since Bischberg lies directly on a river, one of the main traditional ways of life was fishing. There was also lumber as well, as you will see.

Anyway, I LOVE the fishermen’s costume, but I must say the hay bales don’t do it justice! 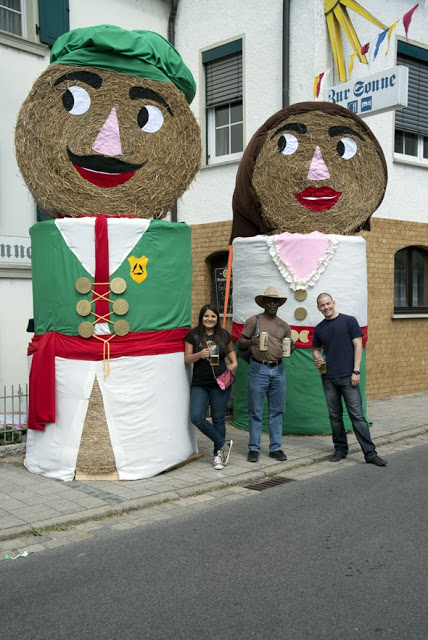 We started by toasting with the local beer from Brauerei Zur Sonne (The Sun Brewery), which is the only beer game in this small town. The brewery is just two blocks down the street from me and they make the beer right there. That’s the brewery behind the mascots in the picture above. I must say it’s some of the best beer I’ve had in Germany. If you come to visit me, bring your taste buds! I’ll take you there.

James and I took our mugs to use for our beer. 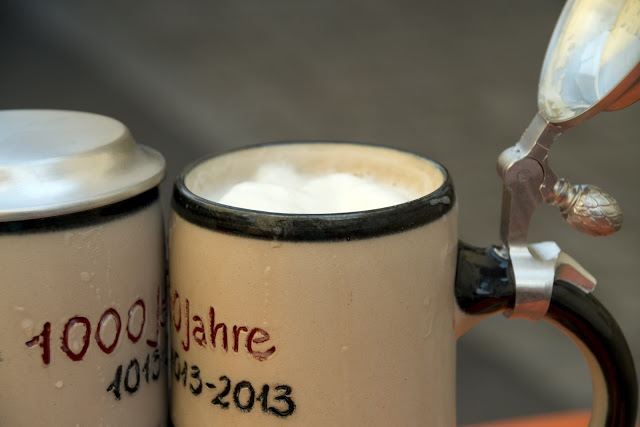 When the other two arrived, we found a table in the shade behind the brewery and had a toast before we got started: 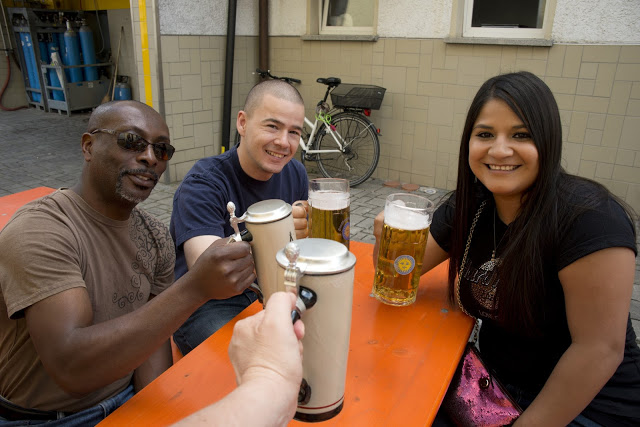 The town was crawling with people dressed up in so many different costumes. Like this guy: 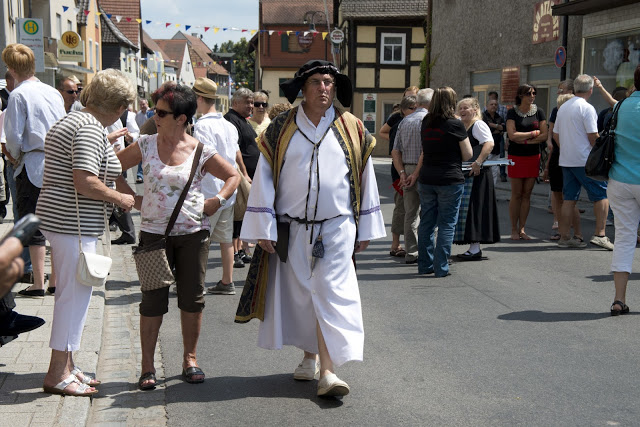 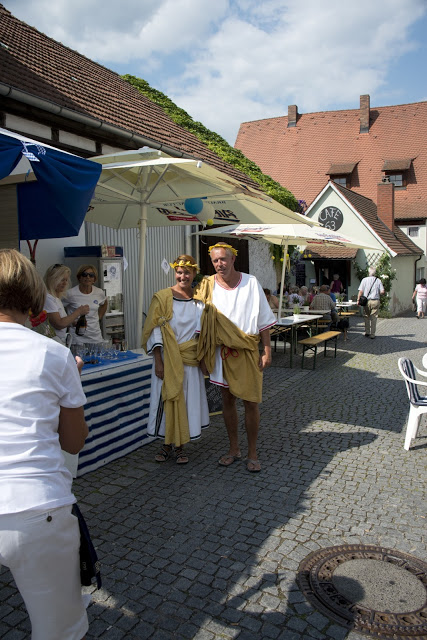 I don’t really know why some of the people had chosen the costumes they wore, but I think the togas were from a local day spa or something.

Of course our local oompah band was present and accounted for. They would set up and play a few songs then break down and walk a few blocks, set up and play again. It was as if they were following us! 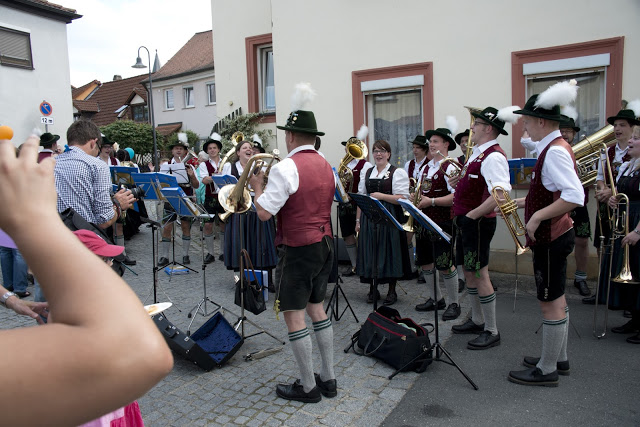 Here, a couple of the band members were clowning around with the women in the belly-dancing school tent: 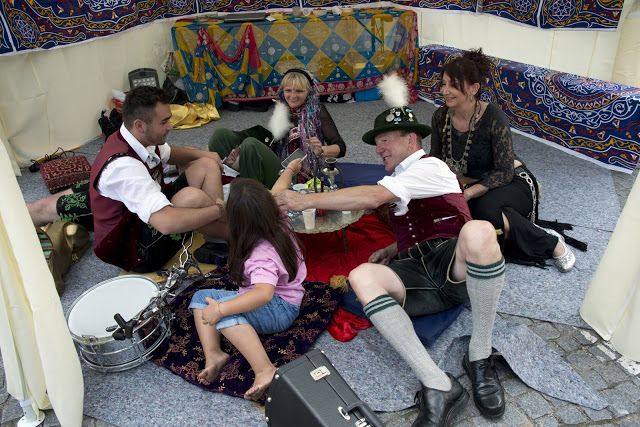 The town was filled with old-fashioned farming equipment and other historical paraphernalia, such as this old tractor: 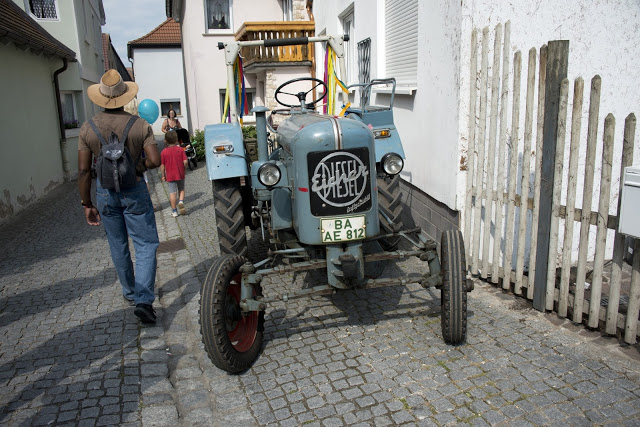 In this animation, I used stills I shot of a sort of conga-line the band girls initiated. The weird thing was that the song they were playing and singing included a good, old-fashioned “Indian war cry,” such as I used to utter as a child before that kind of thing became unpolitically correct. I still don’t know what the song was about because it sounded like a typical German folk song to me.

Here’s another animation I shot of a game that, I’m quite sure, was designed for children. However, a rather drunken band member decided to try it for himself:

Although I left the scene right after I shot this, I’m told the girl on the far left recording this guy’s triumphant run tried it next and almost ended up with a concussion when she fell off the horse! Medieval children’s games are not child’s play!

In addition to the traditional fishermen’s guild, the local lumber yard guys dressed up in traditional loggers’ costumes: 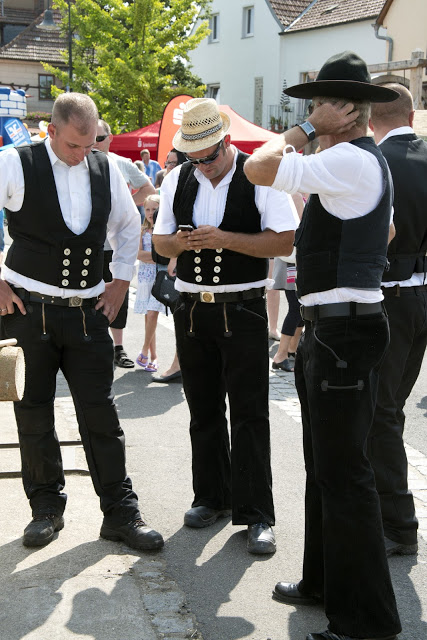 Their demonstration was a little one-sided, with only one of the guys actually doing all the work:

After this tiring day spent in a very hot sun and consuming a lot of the Sonne Bier, we were all pretty wiped and ready for a local pizza: 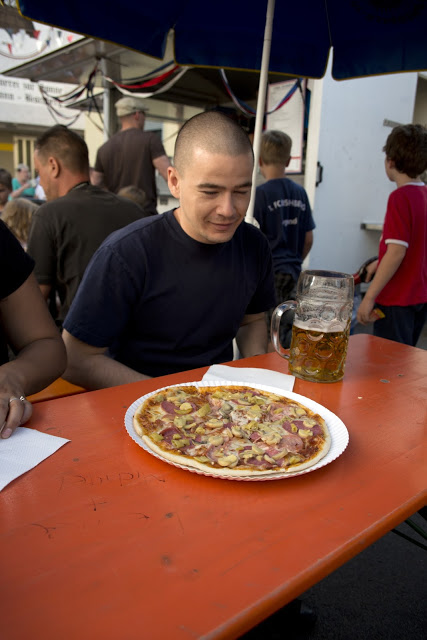 I admit we followed it up with some wonderful German ice cream at the local shop before the walk of shame to the bus stop to see off Ivan and Carmela: 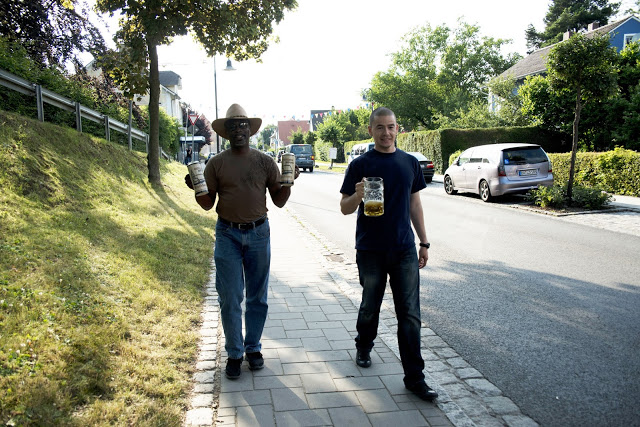 Come to think of it, this was the last time they saw James in person. How sad. Luckily, I was able to spend a few more great times with them before they left Germany. We sure miss them! 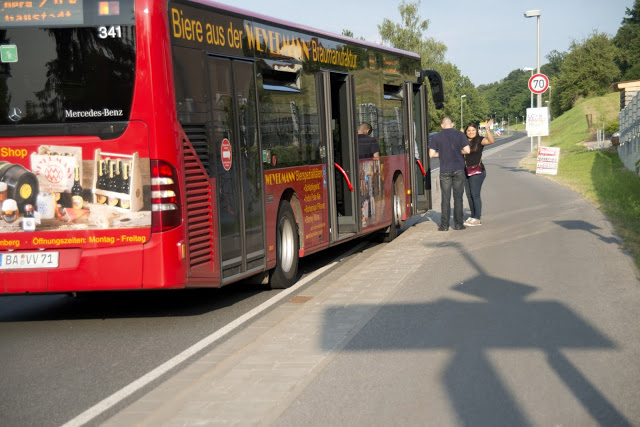 I’m very glad the historical market exceeded expectations and particularly glad that it totally blew the poor ox out of the water! I’m very happy I got to see such an event with people I love, and especially so since Carmela and Ivan have gone. In addition, I myself am moving to a little town called Garching, just north of Munich. James is now working there and we have a wonderful new apartment all shiny and new. In the meantime, I am moving one Mini-load at a time each weekend and still teaching in between.

Garching has its own charms, which I’m sure you’ll see, but it’s kind of the end of an era for me here in Bischberg. After three years, it’s time! 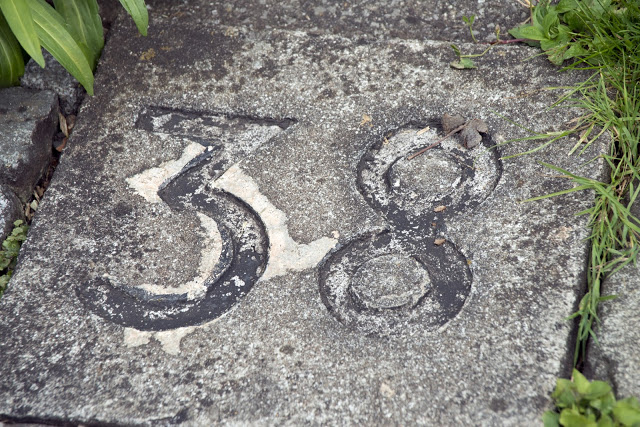