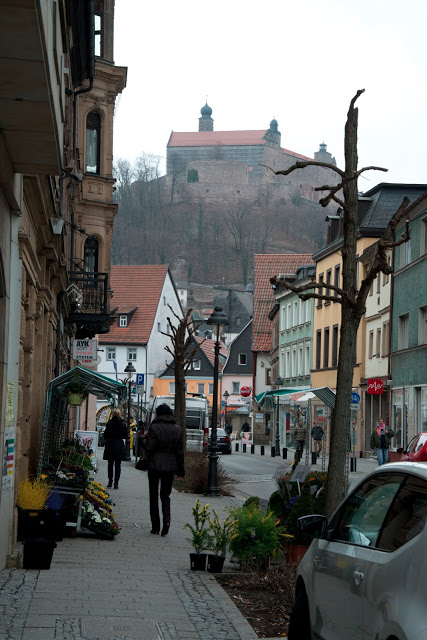 It’s that time of year!

Teach your kids (or learn yourself) how to dye eggs

is a great resource for parents and teachers, too. I gathered this information over the course of a few years living and traveling in Europe. Now I bring the easy, step-by-step instructions to you, all in this handy manual.

Save money and packaging;

use vegetable-based items  like beets and cabbage instead of chemical dyes.

Click the picture below and buy my book today

It’s still winter here, despite a couple of weeks of unseasonably warm weather in early February and despite the fact that Easter happened. Though I’m sure spring will show up any day now, most days are still cold and windy with little or no sunshine.

Yesterday was no exception, but I don’t mind the cold weather. So I hopped a train for a daytrip to nearby Kulmbach. I’d heard it was a nice little place to visit and I’d passed it often on my way to Kronach, Nuremberg, Bayreuth and other destinations. So I figured it was about time to look into it.

Here is all I had ever seen of Kulmbach as the train passed through: 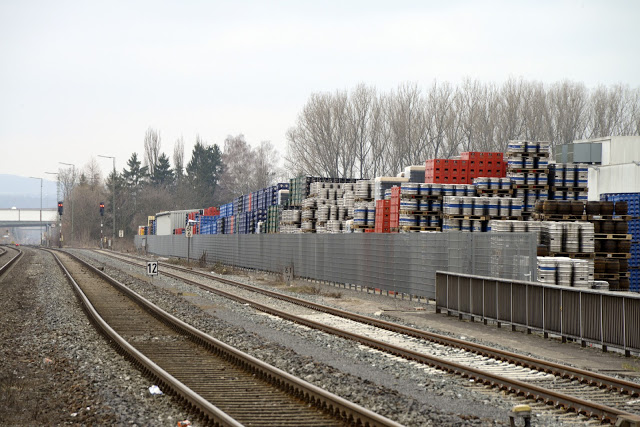 Yes, those are cases and kegs of beer. Kulmbach has a giant, famous brewery and they ship it far and wide. You may even be able to find it in the States. Their brands are Kulmbacher, EKU, Mönchshof and Kapuziner. All of which I can personally vouch for.

Kulmbach is also well known for its well-preserved medieval Plassenburg castle high on the hill above the town. I’d visited the castle many years ago and plan to again in the near future. However, that was not my destination on this trip. I had downloaded the self-guided walking tour of the old village from the town’s website and wanted to do it for myself, taking photos along the way, of course!

Here you can see the castle above the town. It dominates the scenery from almost any viewpoint:

Once I got off the train – a mere 40-minute ride – and oriented myself, I struck out according to the printout. Kulmbach isn’t very big and the map and directions are fairly easy to follow. In addition, the path is well marked by signs for us tourists.

First stop, The White Tower, which was originally a watchtower built into the medieval city walls. The tower dates from about 1300 or so.

It’s surprising how much of the wall remains. You’ll see a lot of it in this post. Check out the steep, sweeping roof of the tower. It was unusual architecture in those days. Next to the tower you see a short, fat one that is also part of the city walls. 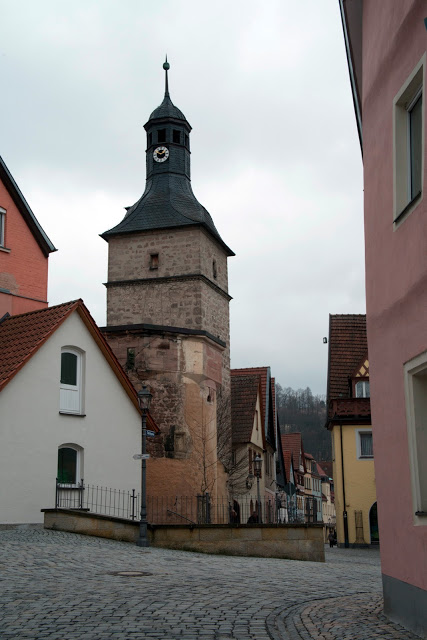 A distinct advantage of touring on a cold, blustery day is that there was absolutely no one else around! I followed the path along the old city wall up some narrow passages. As you can see in this photo, the old wall is now part of a house and you can see the satellite dish on the balcony above: 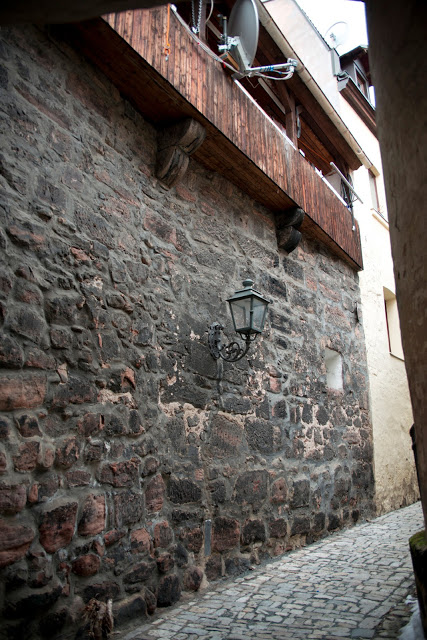 This part of the wall had a helpful mural showing the way. I was headed in the direction of the castle and the way was steep: 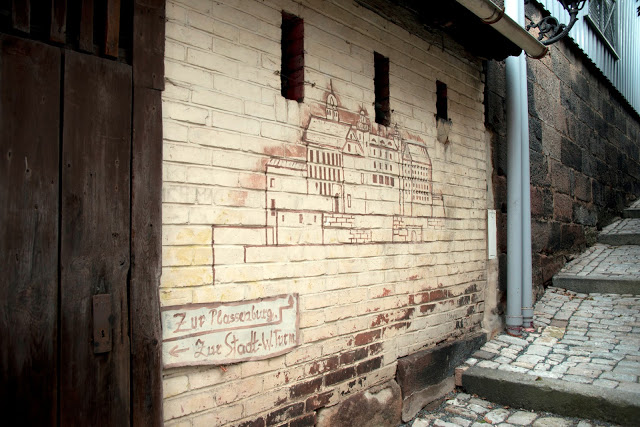 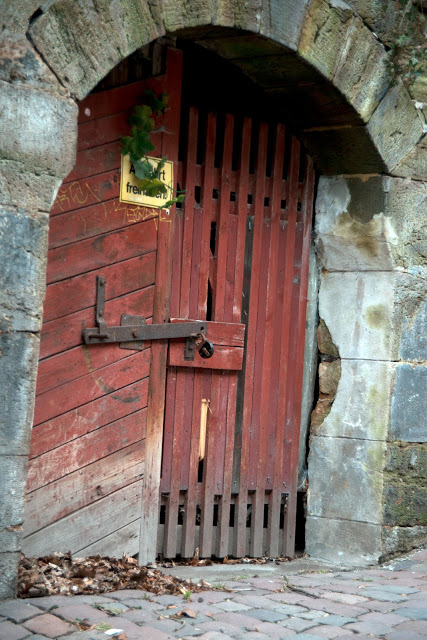 Then I came to the Red Tower, over 100 years older than the White Tower. It was also part of the medieval defenses. You can see the old wall on the left in the foreground in this photo. The Kulmbach website makes mention of the top floor being the “town whistler’s apartment” but I couldn’t find anything about what a town whistler was! Maybe they meant town crier and it got lost in translation. Dunno. 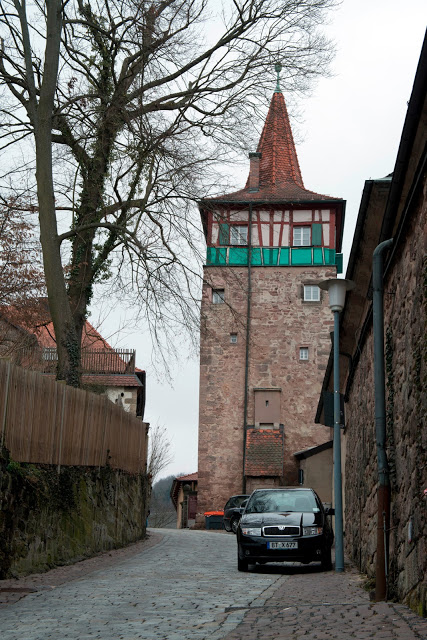 Note the sweeping roof design, much like that of the White Tower. As is the case with a snowy land like Germany, snow slides off roofs and falls to the ground below. From such a height it could really do some damage. So this sign is typical of such places. It says, “Attention – Roof Avalanches! Park your car here at your own risk.” There were no cars parked there. 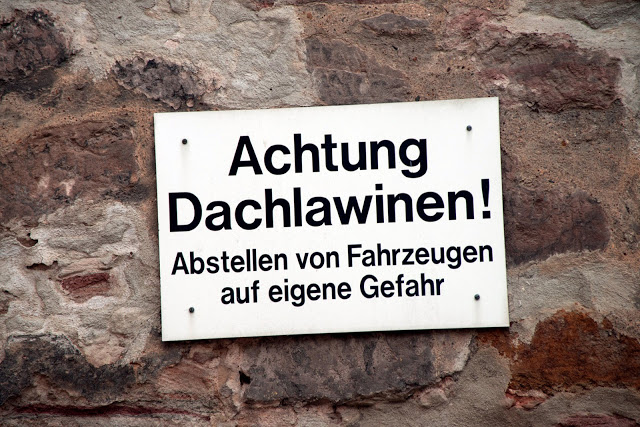 Just beyond the Red Tower I could have zigged and gone to the left to see the castle. Instead, I zagged and made my way back down through an archway in the old wall to the historical city district. You can see how far up on the hills I had climbed from this shot of the stairs leading back down: 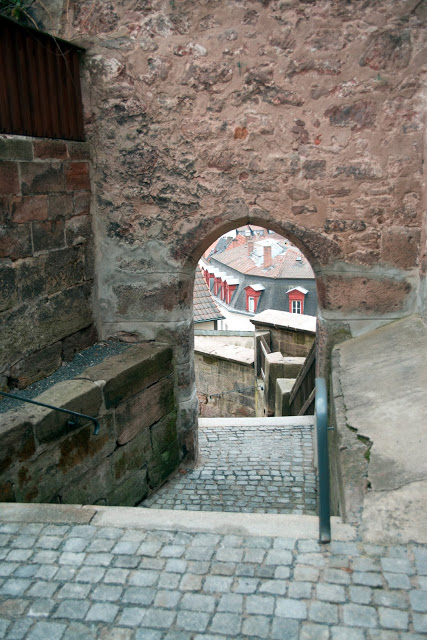 On my way down I saw some very interesting architecture: 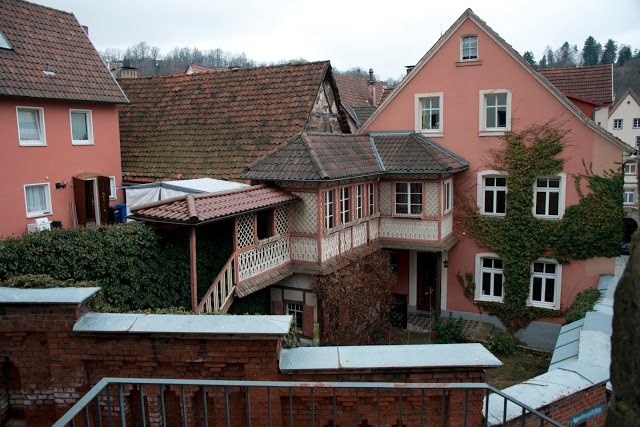 Eventually I made it back down to the city street to the oldest market place in town. You can see the town fountain here still all decked out in Easter finery. The Germans in this area adorn public fountains with evergreens and colored eggs and call them Osterbrunnen, “Easter Fountains.” What’s with the shapely hindquarters of the lion? 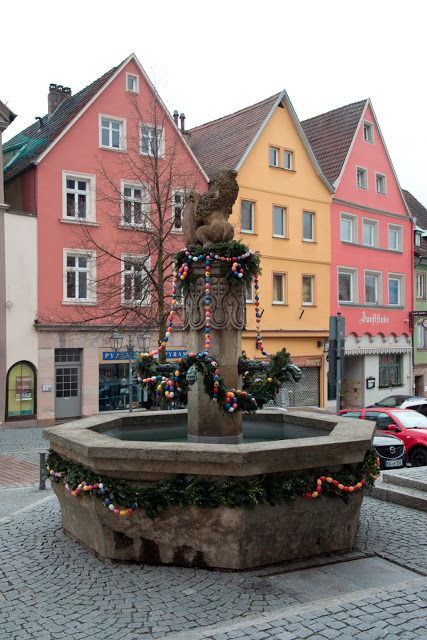 Following my little downloaded map, I walked through a pleasant passageway that had an interesting door (you’re welcome, Deb) and was freshly painted. 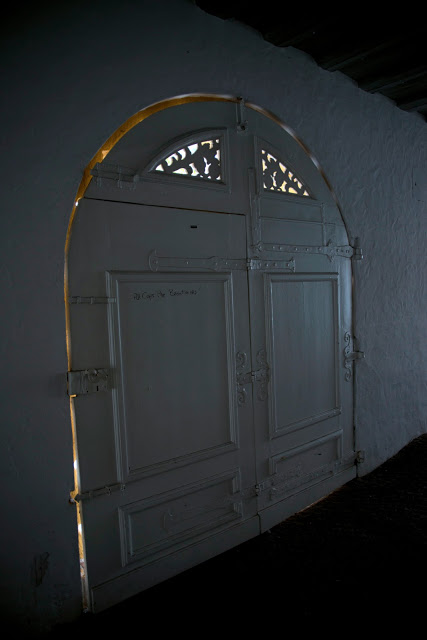 It also had a nice logo written in Sharpie: 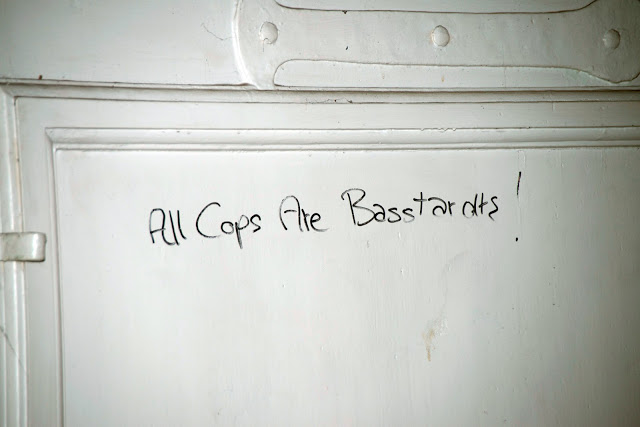 It’s funny to me that basstardte is NOT the German word for “bastard”, but whoever wrote it added a ‘d’ before the ‘t’ and used an ‘e’ to make it plural, all very German language features. They got “cops” right, though.

Along the way around the old city walls were more churches and even the home of a margravine (duchess) who had pissed off someone in Bayreuth so was obliged to live here as a result. You can tell there was a lot of money in Kulmbach through the ages. There was also a school that Thomas Gottschalk, a popular German TV variety show host, attended. Google Image his name if you’re curious. The school, though, had some interesting metal sculptures along the fence: 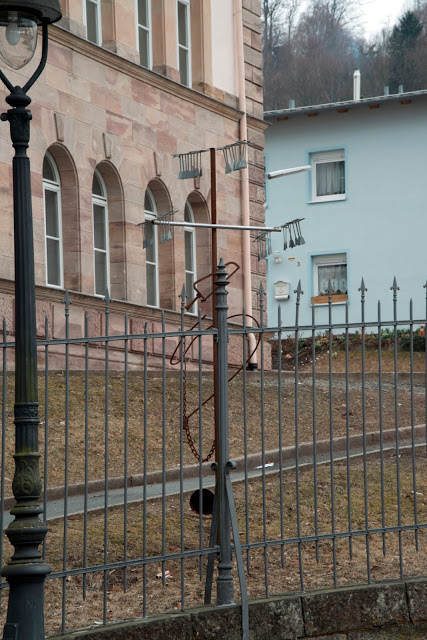 On the other side of the street is a sign reminding you that the ground along the sidewalk is not a dog’s bathroom. Someone had tried to put a sticker over the first letter in the word kein, which would have changed the meaning from “this is no dog’s bathroom” to “this is a dog’s bathroom.” Or, you could replace the K with an M and have “this is my dog’s bathroom”. Those wacky Germans! 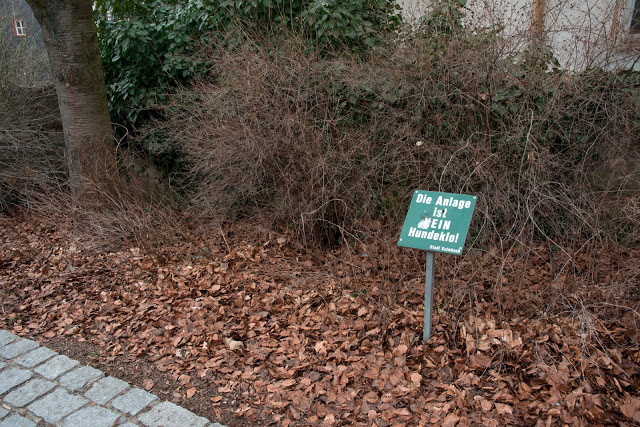 Now I was on the opposite side of town from the castle. Here you can see the old town wall, too. It serves as the backs of lots of houses and shops. 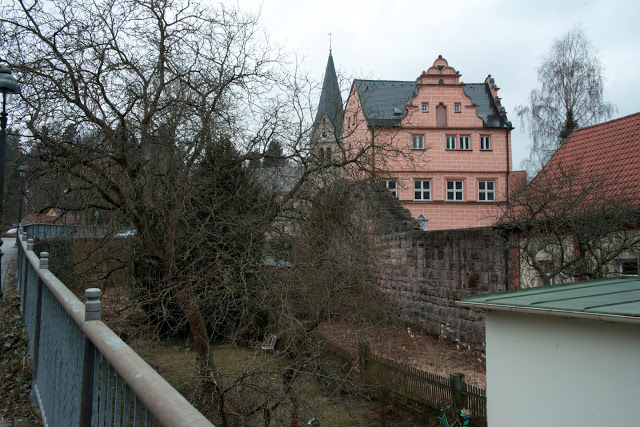 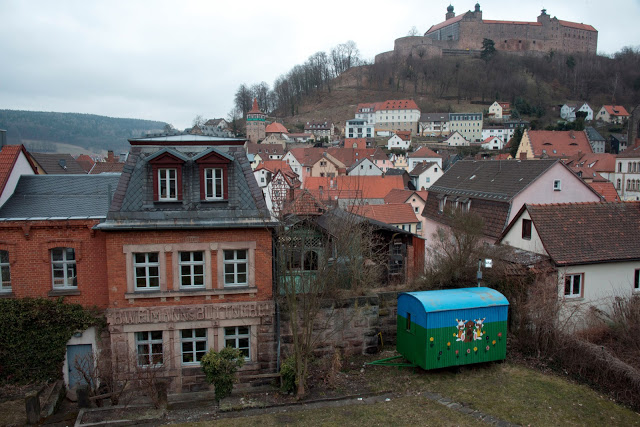 Half of an old tower is still here as well. The other side of it is a modern building face and the whole thing is used by the local adult education center. 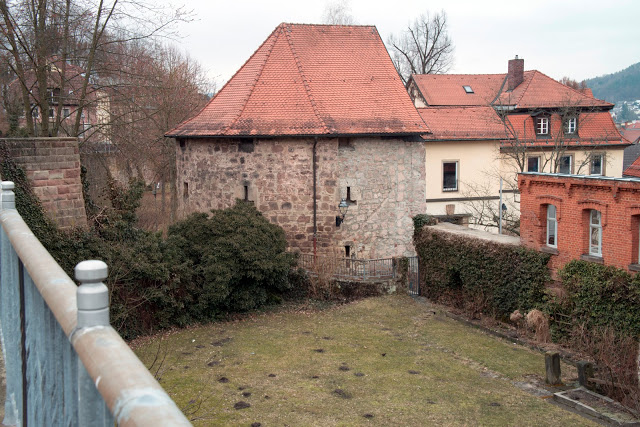 I cut through the old wall next to the half tower and made my way down into the old town again. It is a delightful old village and I’d be here all night trying to upload all the photos I took of the place. But I’ll just use this one I shot in the window of a bakery: 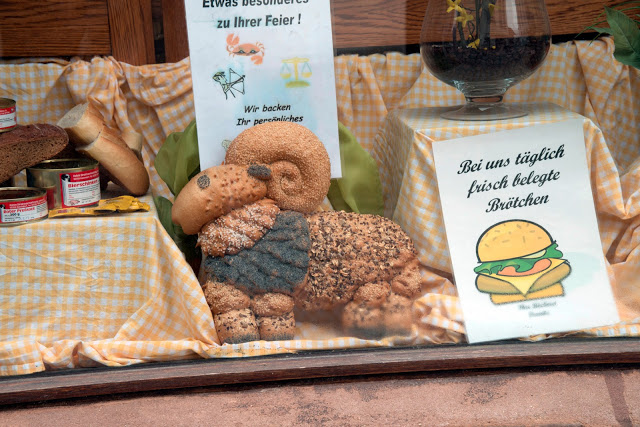 Soon I came to the main market square, which dates from the 1300s, and the Luitpold fountain, built much later in 1898 in honor of Luitpold (who else?), the local prince regent. You can see its Osterbrunnen as well. 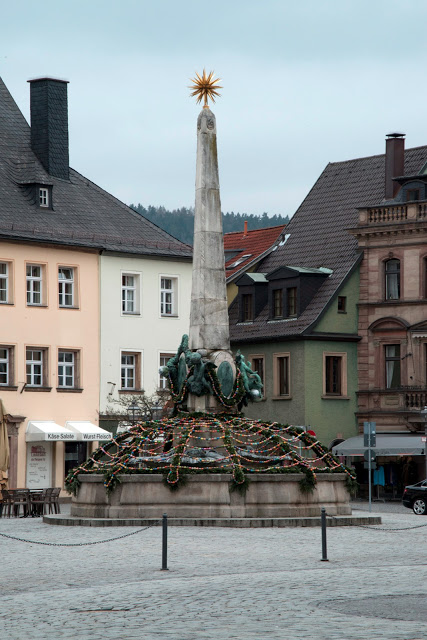 Behind me as I shot the fountain is the lovely town hall, all decked out in Rococo. Note the two ladies flanking the clock. The one on the left holds a book and stands for wisdom; the other holds a scales and stands for justice. This building reminded me a lot of Regensburg. 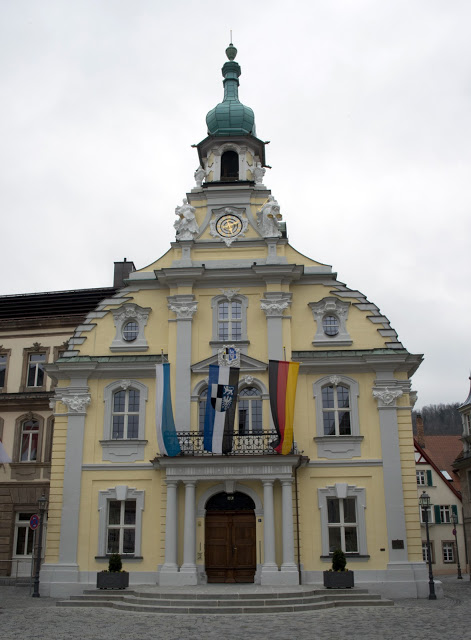 To the left as you face the town hall, with your back to the fountain, is the old granary (Kornhaus, hahaha!) that is now a bank. Next to it is this guy, Hans Suess (no relation), aka Hans von Kulmbach, a painter who lived from 1476 to 1522. He was from Kulmbach but worked mainly in Nuremberg with Dürer. He also did a famous altarpiece in Krakow. I dig his coat. 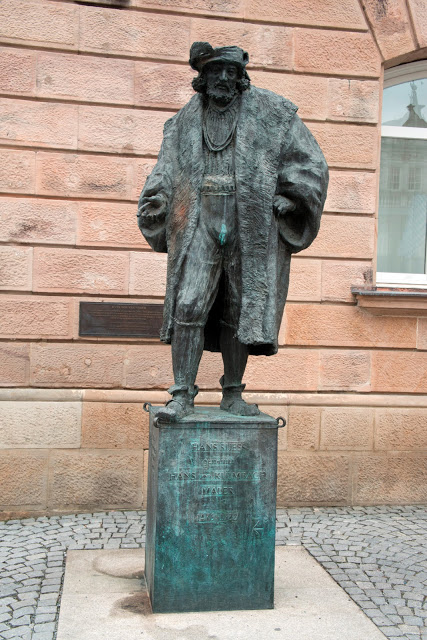 Finally, I made my way across the square past the fountain and down the pedestrian shopping area of Langgassse, which used to be an overseas trade district. 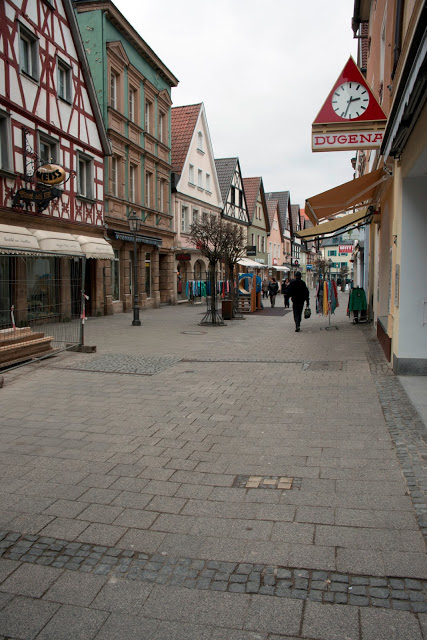 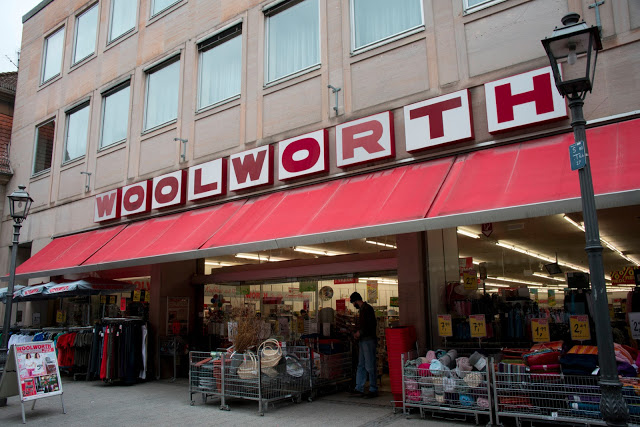 At the end of the pedestrian zone is the Holzmarkt, or former lumber market square. You can see the Osterbrunnen here as well, on the fountain sculpted by Hans Georg Schlehdorn in 1696 and painted by Lorenz Reincke. Yeah, I don’t know them, either, but I like the sculpture. 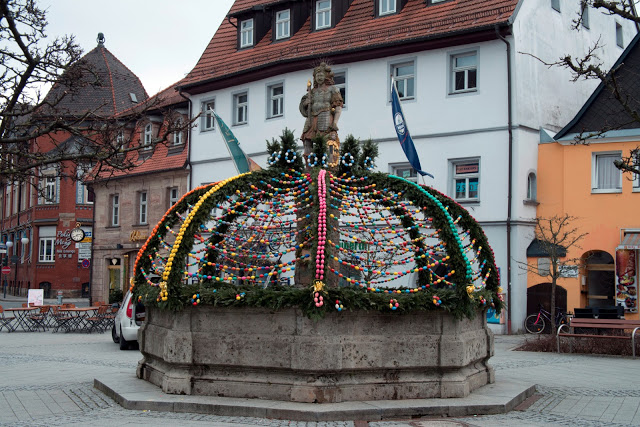 Just behind this fountain in the white building is a restaurant called Stadtschänke, which translates roughly as City Tap. I went in seeking beer and sustenance. I found both. The beer was great – local Kulmbacher, of course. The meal looked wonderful! It was a big chunk of pork that had been breaded and deep fried, served with pepper gravy and two potato dumplings. 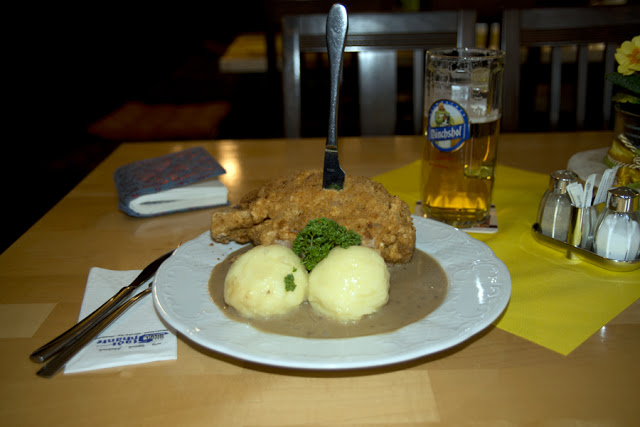 As good as it looked, the meat and gravy were relatively flavorless, I’m sorry to say, and the dumplings were just bad. However, I asked the waitress to pack up the leftover meat (there was a lot leftover!) and I took it home. I seasoned it up and put it in the oven when I got home and had a very tasty dinner out of it.

After my repast, I wandered back to the train station and headed home. It was not very late, but the day full of walking had worn me out. I picked up a few bottles of brew on my way out of town to enjoy along with my pork dinner. All in all, it was a nice, quiet, enjoyable day. I hope you enjoyed it, too. Take care and tune in next week! 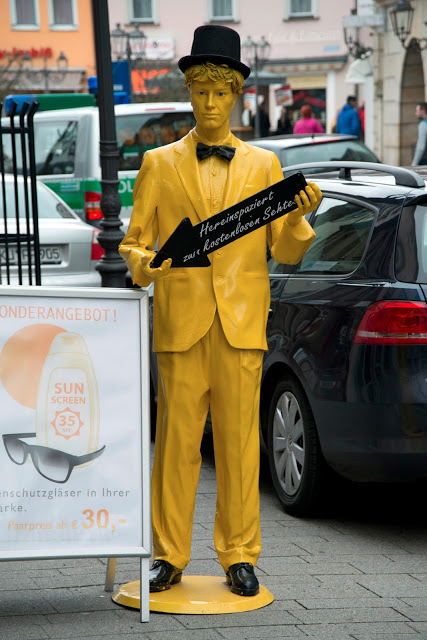