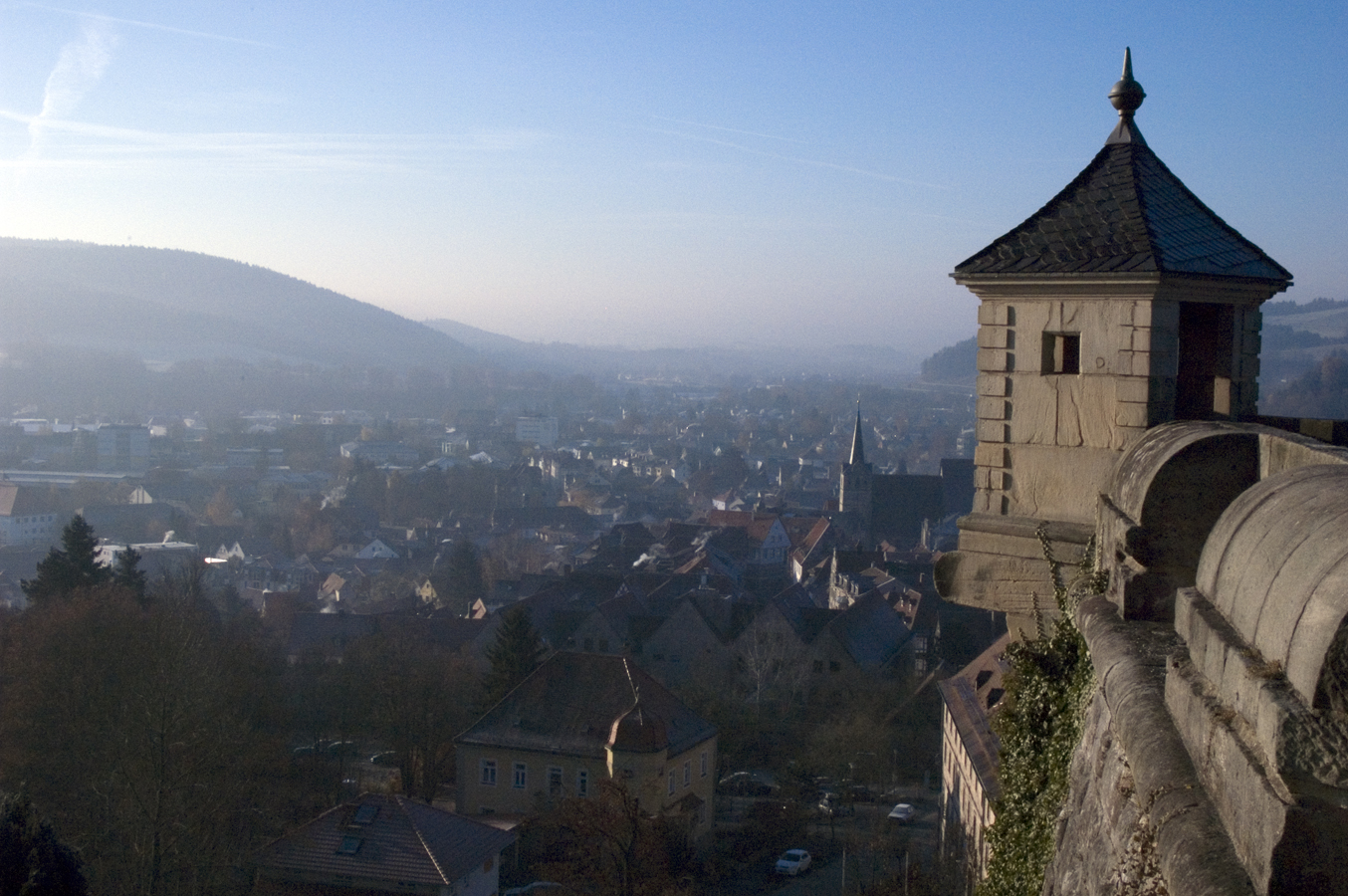 How are you all holding up? It’s been tough, and times are uncertain, but I’ve been so thrilled with the creative things that have come out of this quarantine situation. Focus on that. Or create something of your own. If you’re into cooking, buy one or two of my cookbooks on Amazon. They have authentic recipes that I’ve personally tested, and they’re fun! Besides, you get to eat the results!

Here’s hoping all of you and your loved ones are safe and healthy. Hang in there and read more ATFT posts!

This post was originally published on December 11, 2011 and updated on April 21, 2020. The frost pictures in this post are still among my favorite shots. And you’ll be happy to know I’m still in touch with Frank, and also Annette and Michael in Kronach and that they still have the book store. I visited them last December, in fact.

In August I began taking German lessons from a teacher who works at one of the schools I work for. My teacher, Frank, has become a good friend. Our lessons always exceed the allotted time just because of chatting, and he invited me to meet some of his friends at his birthday party in the summer.

I hit it off immediately with his friends, too. There were two married couples and both couples live in nearby Kronach, which is where Frank was born. I’ve kept in touch with both couples since and took one of them up on an invitation to visit Kronach one very chilly weekend in October. It was really just an overnight, but what a wonderful trip!

They are Annette and Michael and they own and operate a bookstore in Kronach called LeseZEICHEN which means “bookmark”. It was for them that I made the bookworm paper sculpture I posted on my art projects blog.

I didn’t realize I’d been to Kronach before, but years ago Hilde and Adi took me and my husband there to visit the castle, called Rosenberg. I remembered the place when I saw the castle. But I’m getting ahead of myself. I also posted blogs about Kronach’s Leuchtet! fest (“Kronach lights up!”).

On a Saturday afternoon I caught a train to Kronach, which is only about a half hour from here by train. Annette met me at the station and we walked through tiny Kronach, stopping off to see their lovely bookstore.

We wended our way on through the village til we came to a point just under the high hill where stands the castle. One more alleyway to go and we arrived at their house. It sits snugly just under the castle hill, so there are no neighbors to the rear. The hill continues downward past the house, so they have a great view from the house overlooking the village.

It was as if this house was built for me! It has three levels plus a cellar. The kitchen is very modern and the three sides of the house facing away from the castle hill have enormous windows that let in lots and lots of light. It is a comfy place with a wood stove in the dining room.

Annette made clay pot chicken and rice and we had marvelous Spanish wine to go with it. We sat at the big wooden dining table and chatted before, during and after dinner until the wee hours. It was as if we’d always known each other!

Here’s a shot I got of the red doorway across the way from their balcony (enjoy, Deb!). It just caught my eye as the only red object in the nightscape: 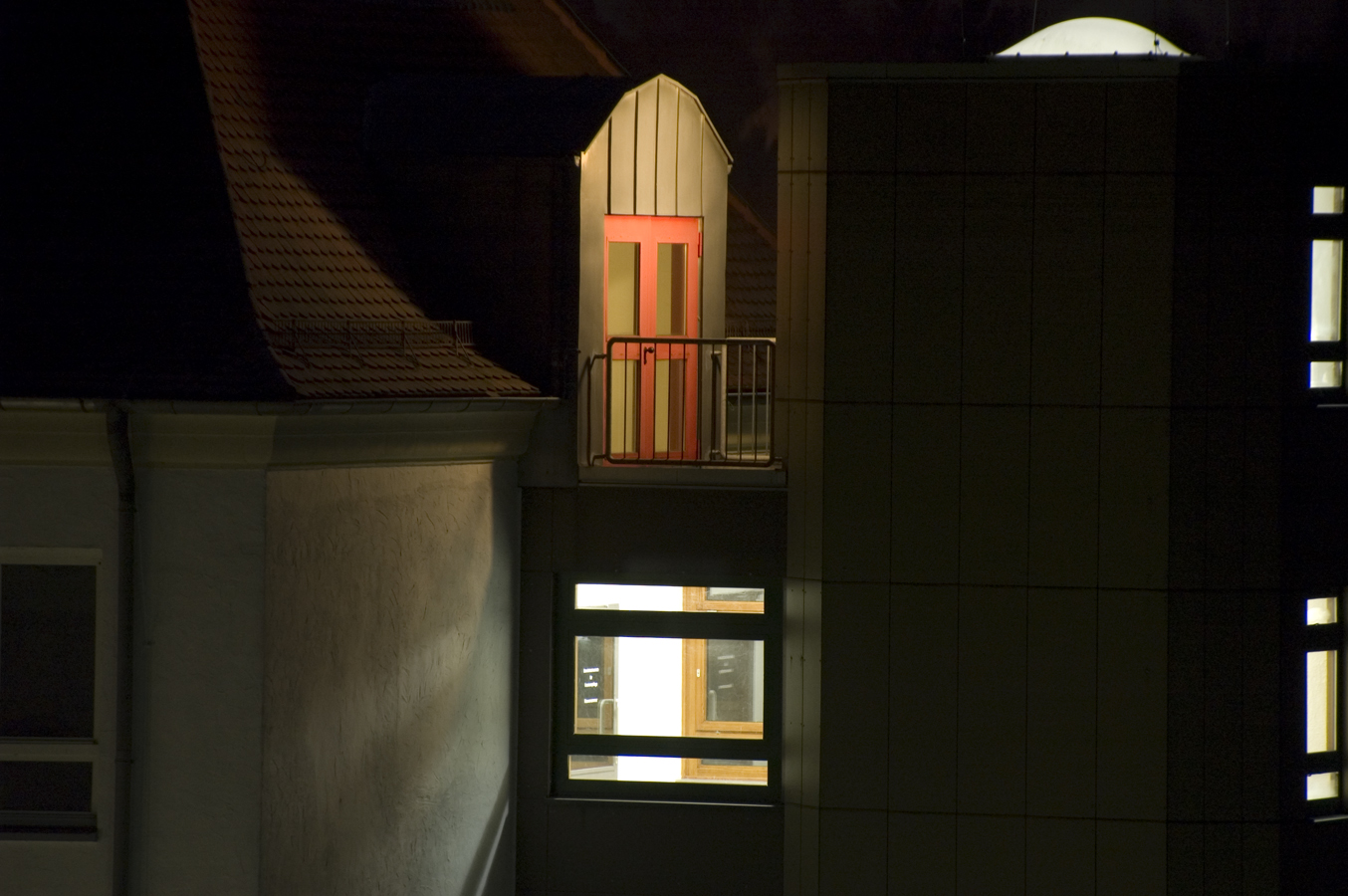 Annette and Michael are well traveled and happy. They have great stories and speak several languages. We are so like-minded! I’m looking forward to many more enjoyable evenings together. We traded travel stories and each came away with a list of books and movies to explore recommended by each other.

I spent the night in a cozy bed in my own room lined with bookcases chock full of every genre imaginable. Across the hall was my own bathroom and a real shower. I awoke to wonderful sunlight streaming through the big window through lots of houseplants. The village was so peaceful on this cold, sunny Sunday morning! I took this shot from the window of the smoke rising out of Kronach’s chimneys: 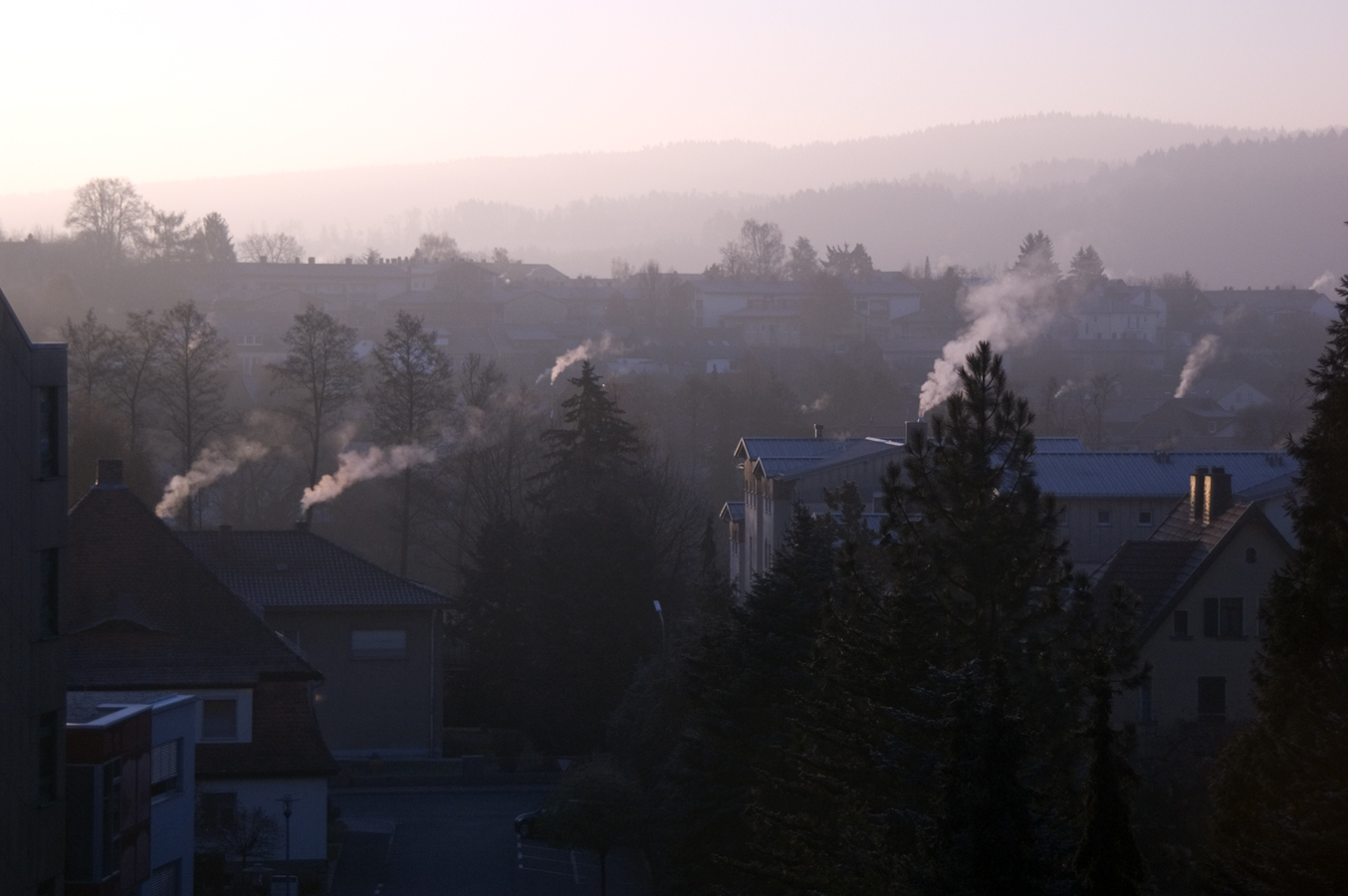 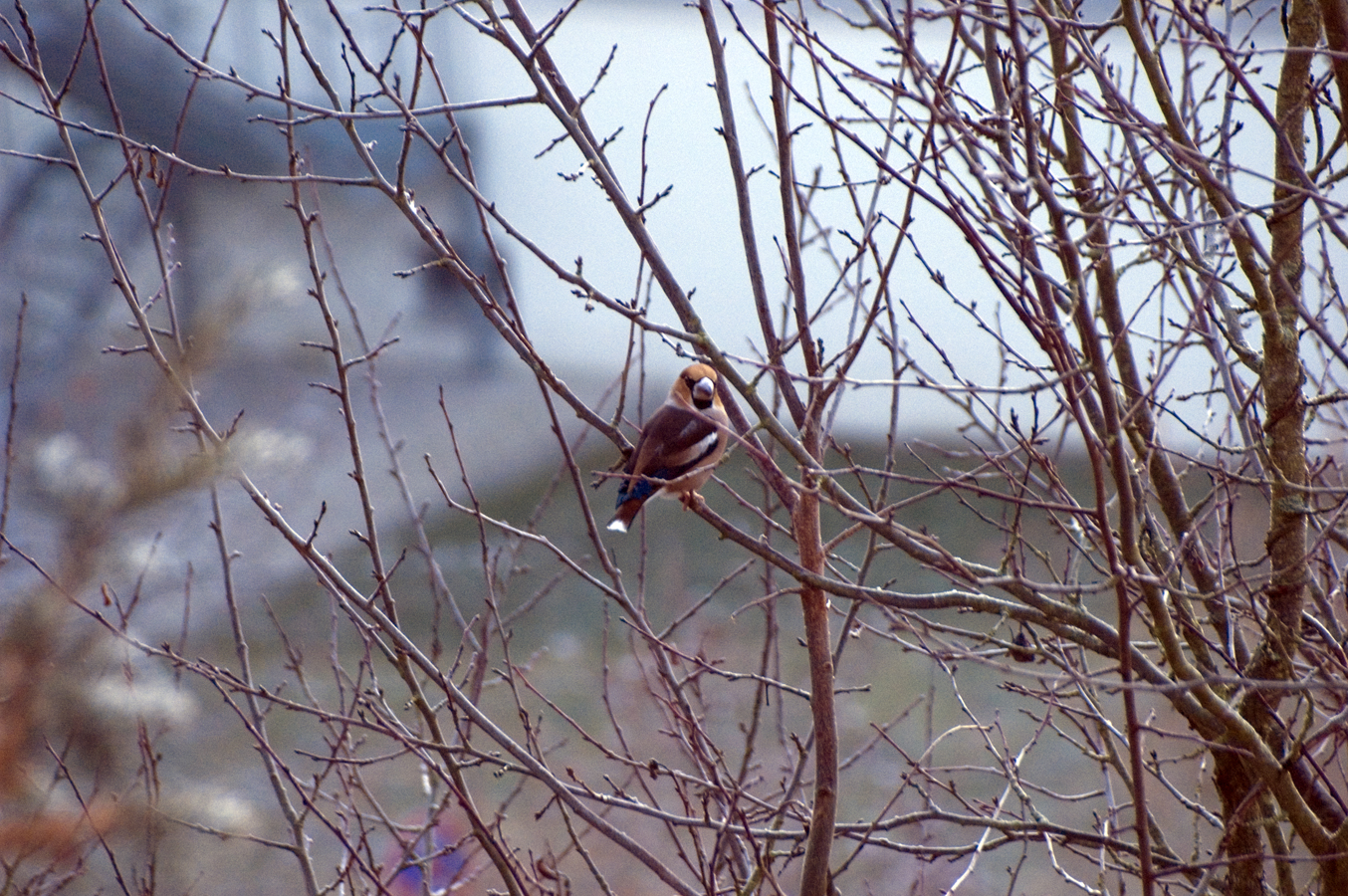 Annette and Michael had told me the night before that they sleep late on Sundays and showed me the housekey in case I wanted to go exploring on my own before they got up. Did I!

So I left the house about 8:00 a.m. on this crisp, frosty morn and headed up the hill to the castle. I kicked through piles of knee-deep frosted autumn leaves: 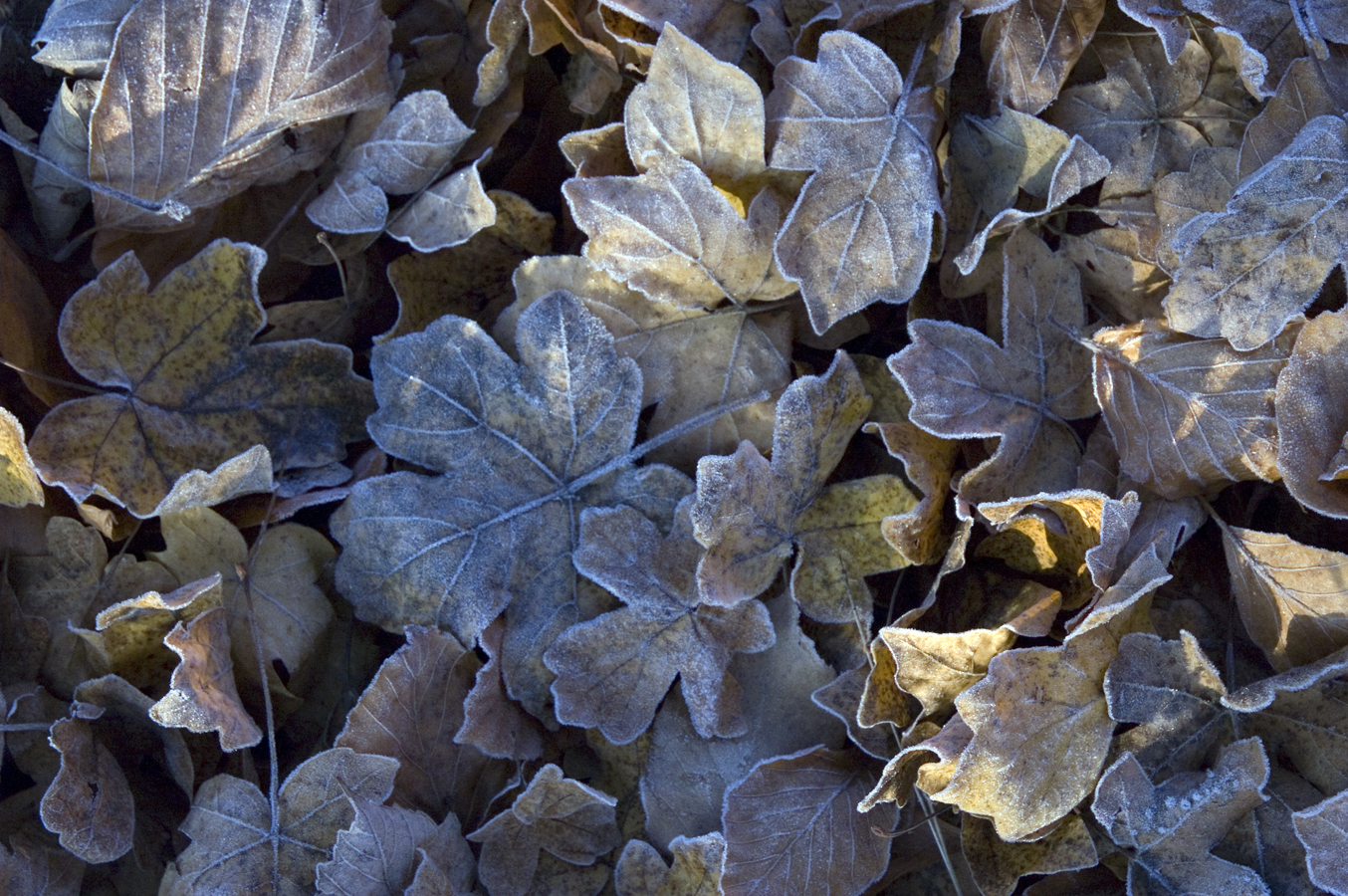 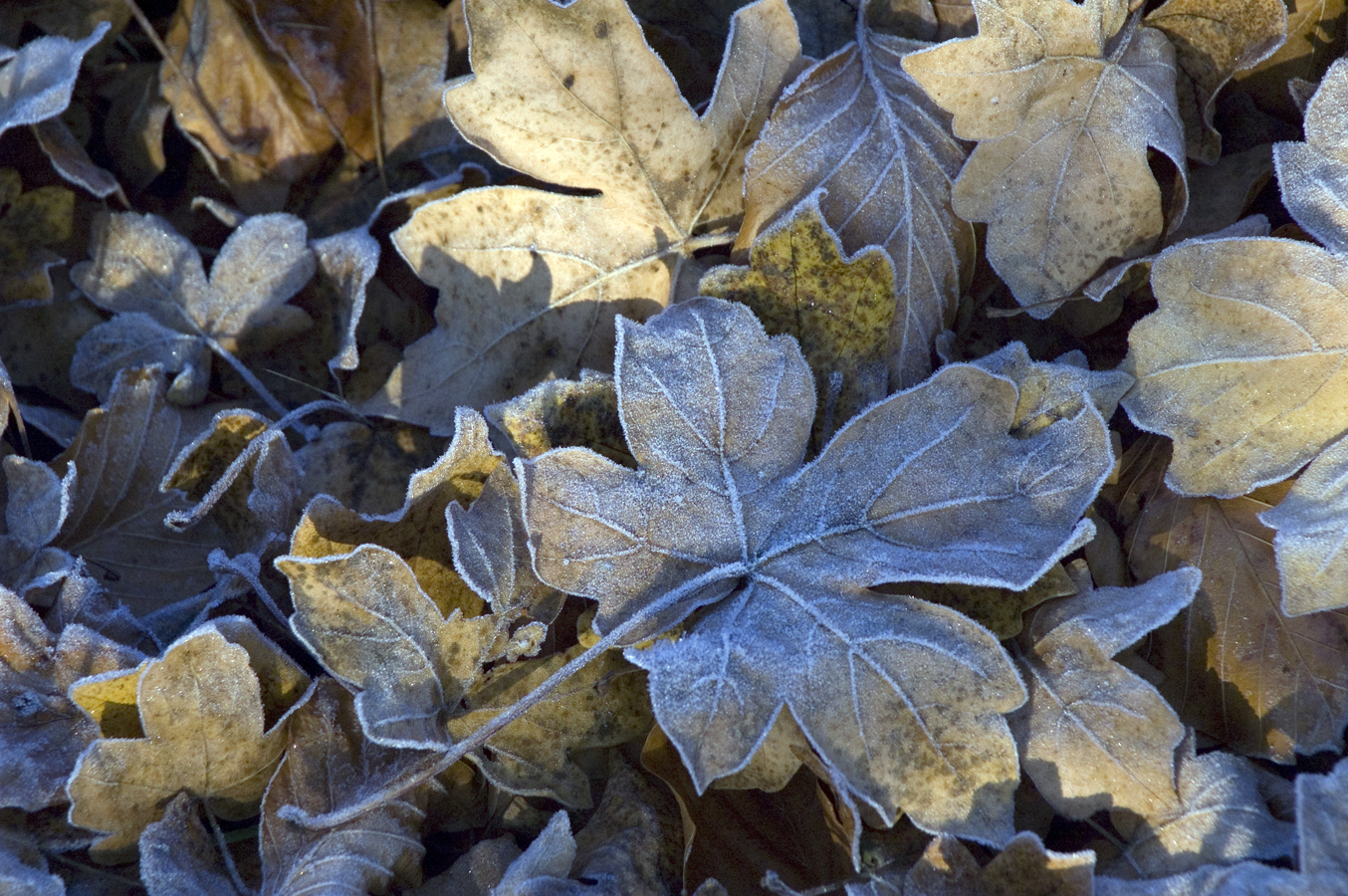 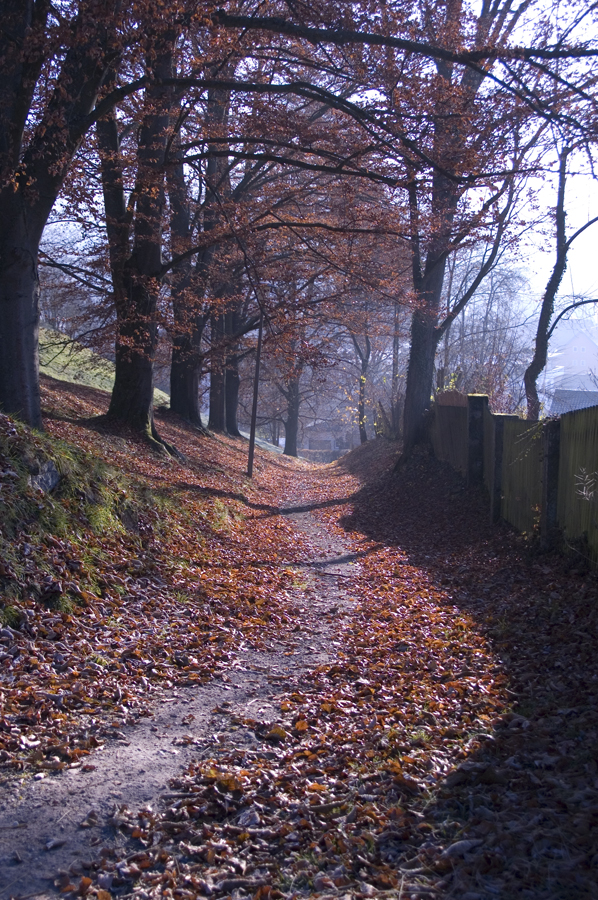 Except for one or two other people, I was alone on the castle grounds for an hour or so, enjoying the sunrise and the frost and the quiet. The castle is the largest in Germany and dates from the Middle Ages. Here is some more info at this link. I don’t think I’ve been in the branch of the Bavarian National Museum on the castle grounds. That will have to be on my to-do list for next time.

This time it was all about enjoying the morning and photographing the outdoor areas. I’ll let the photos tell the story: 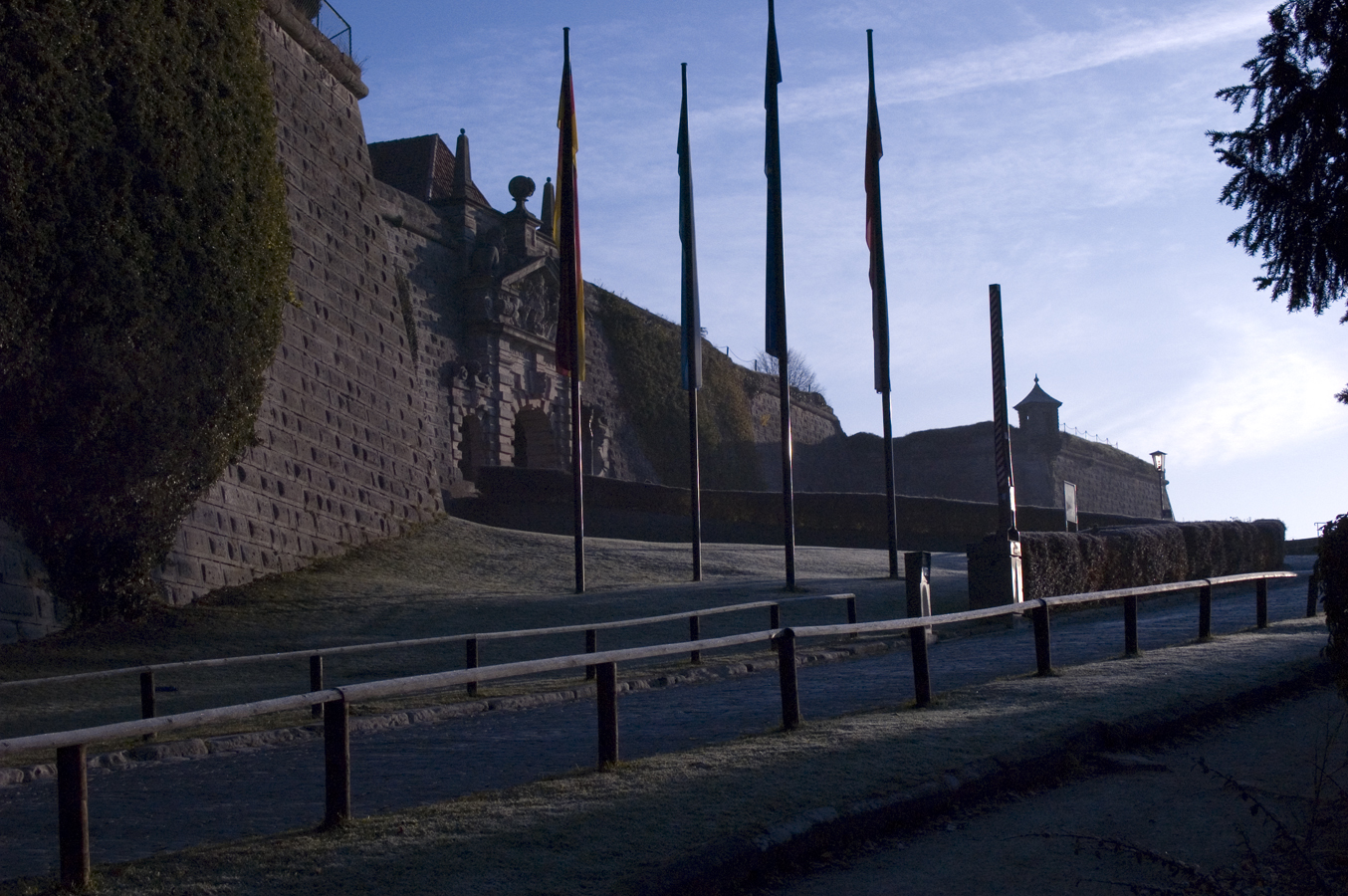 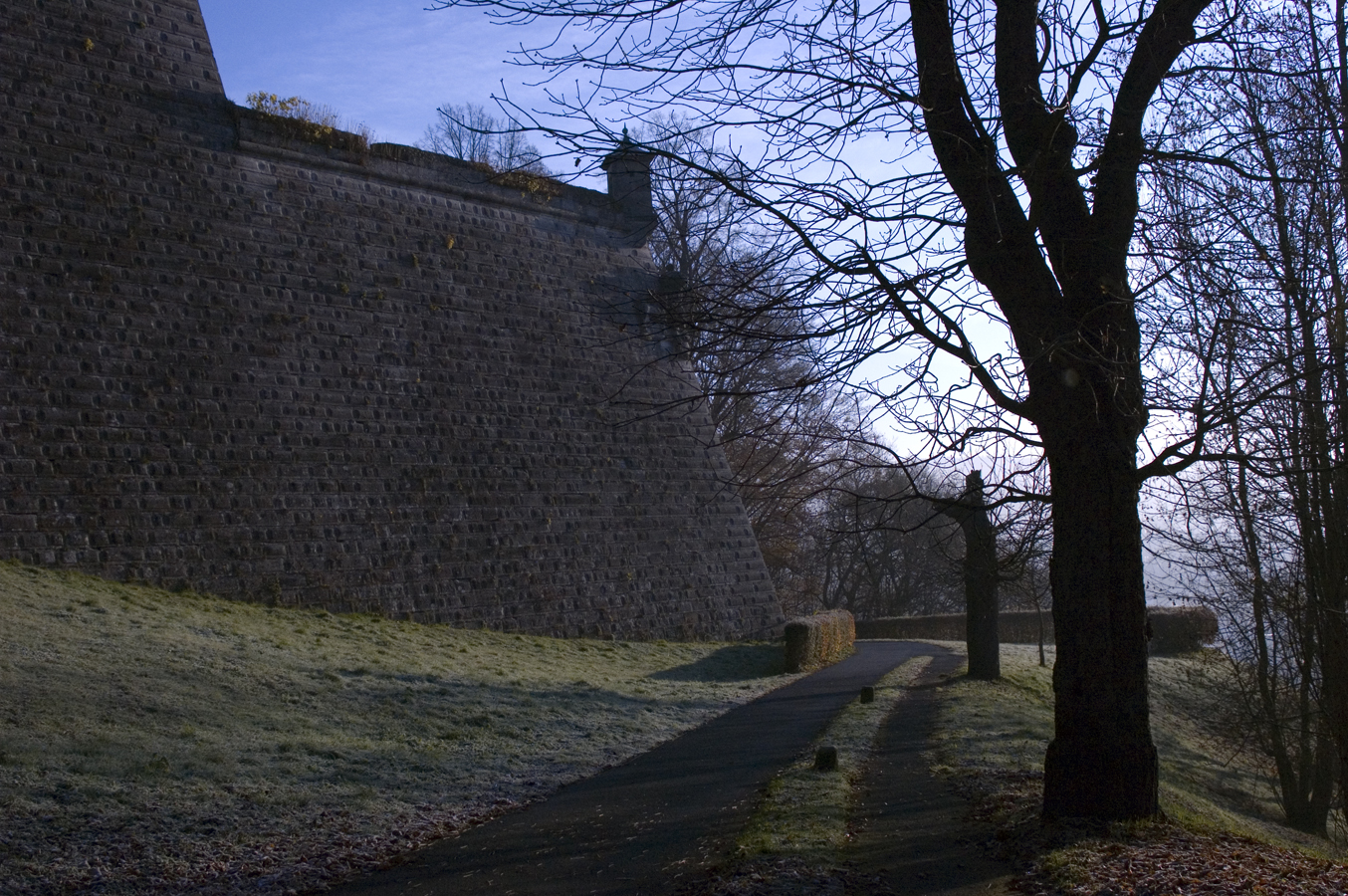 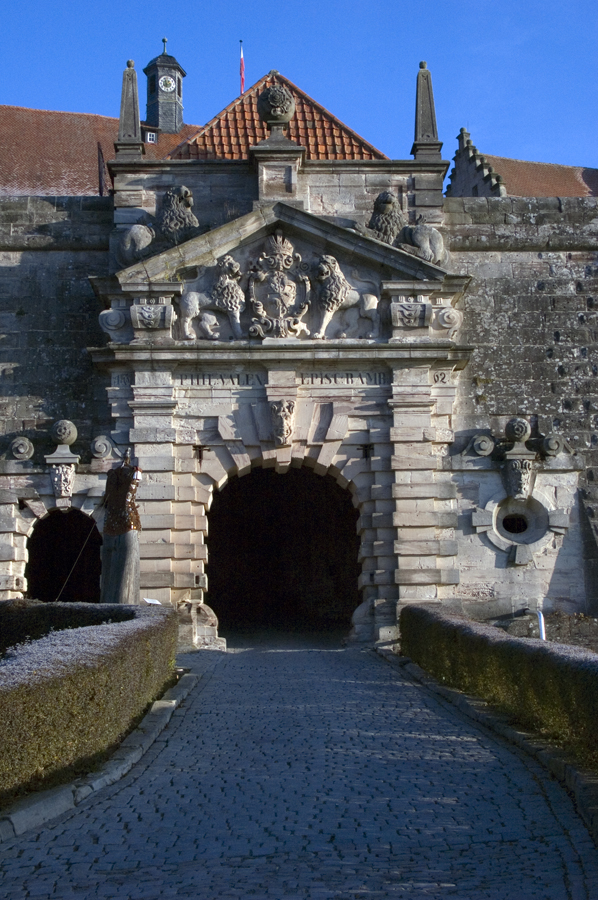 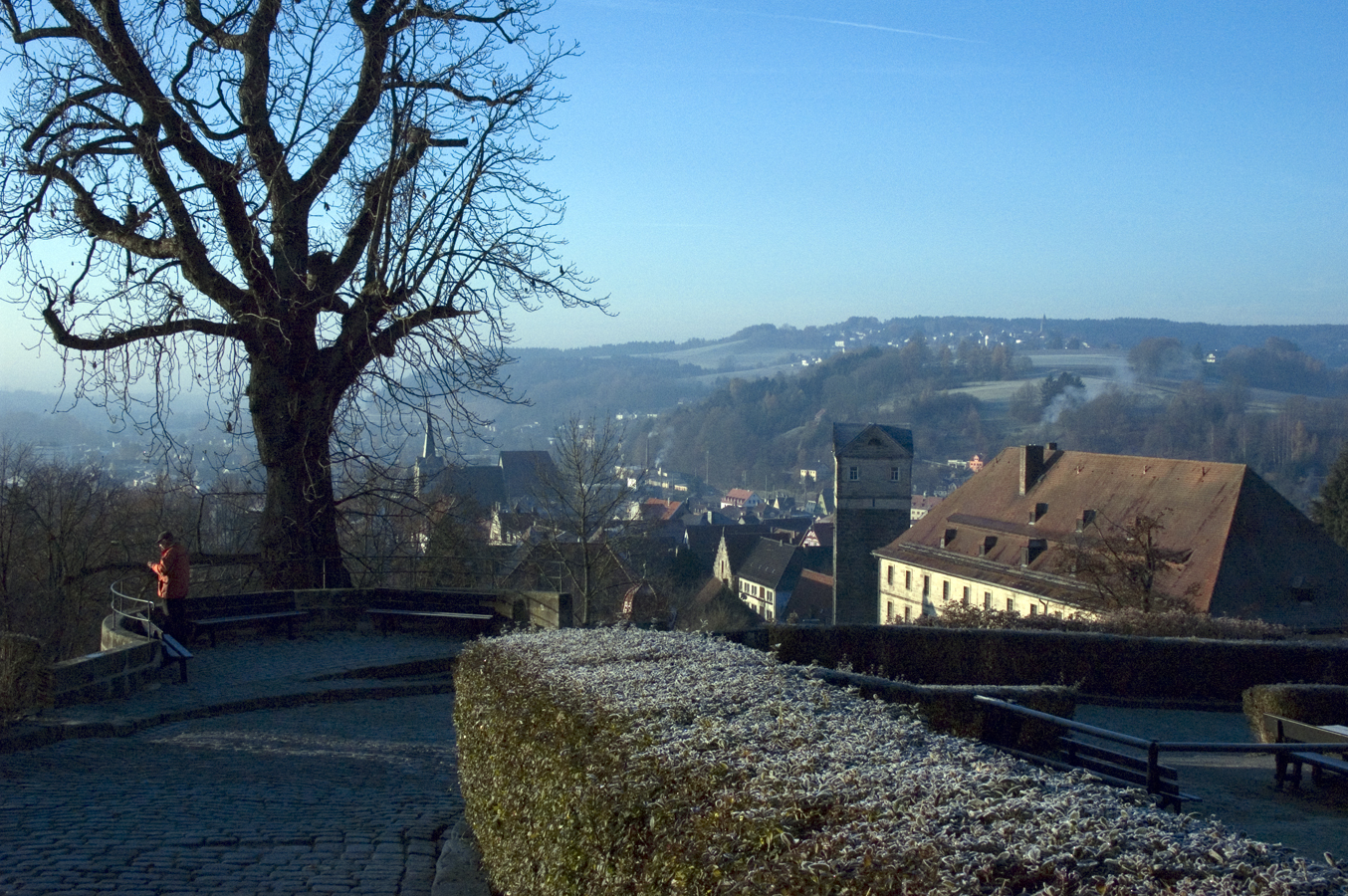 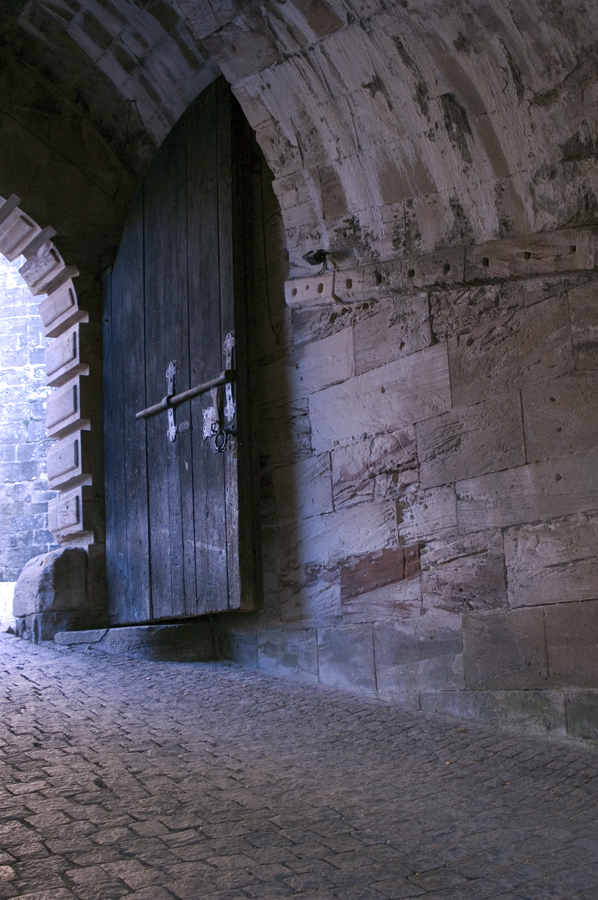 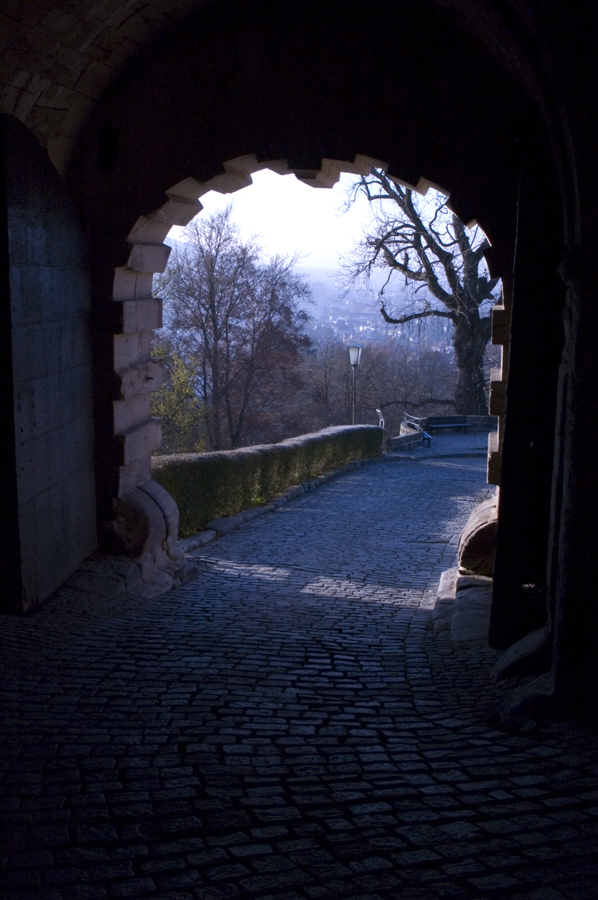 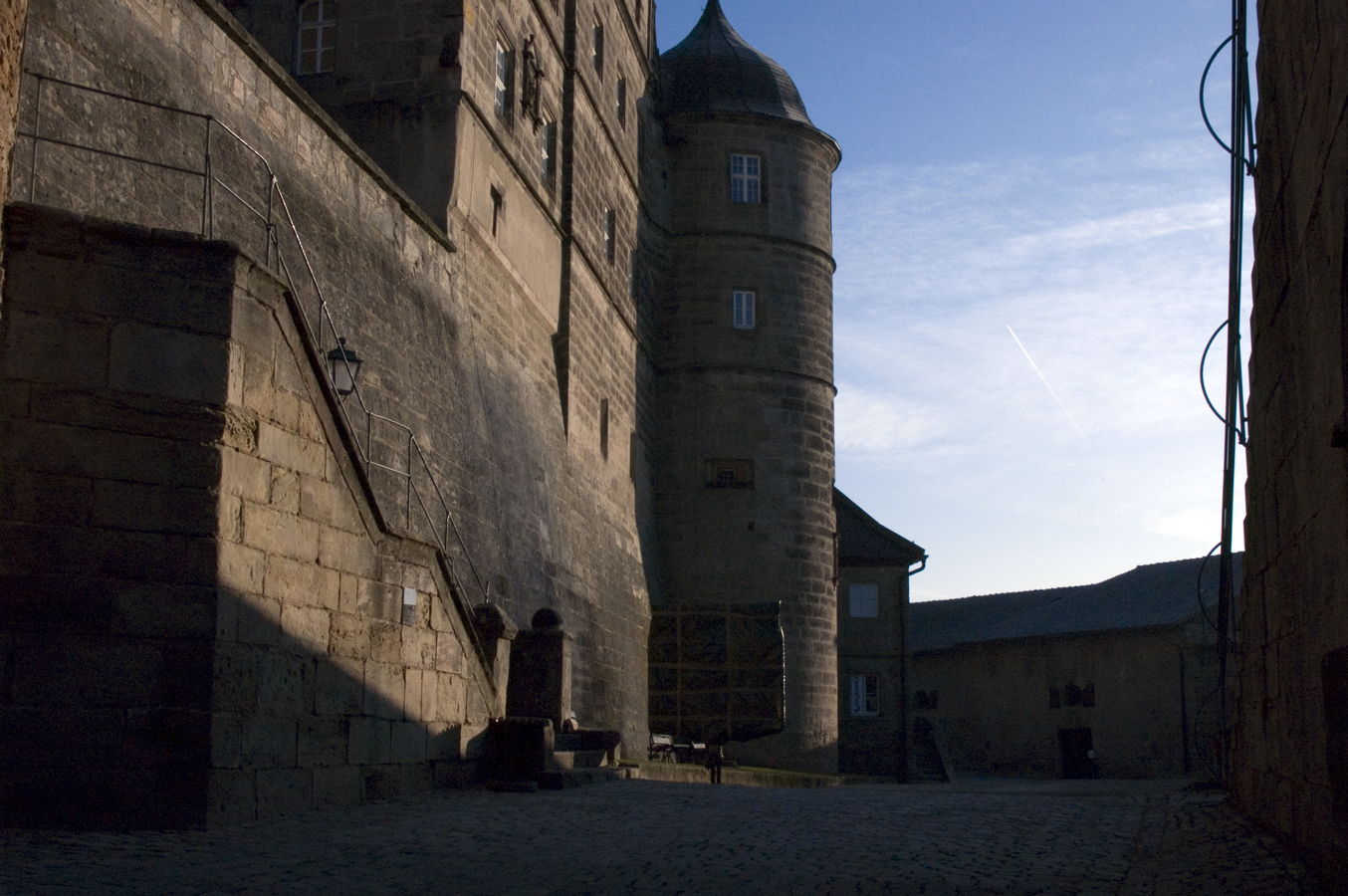 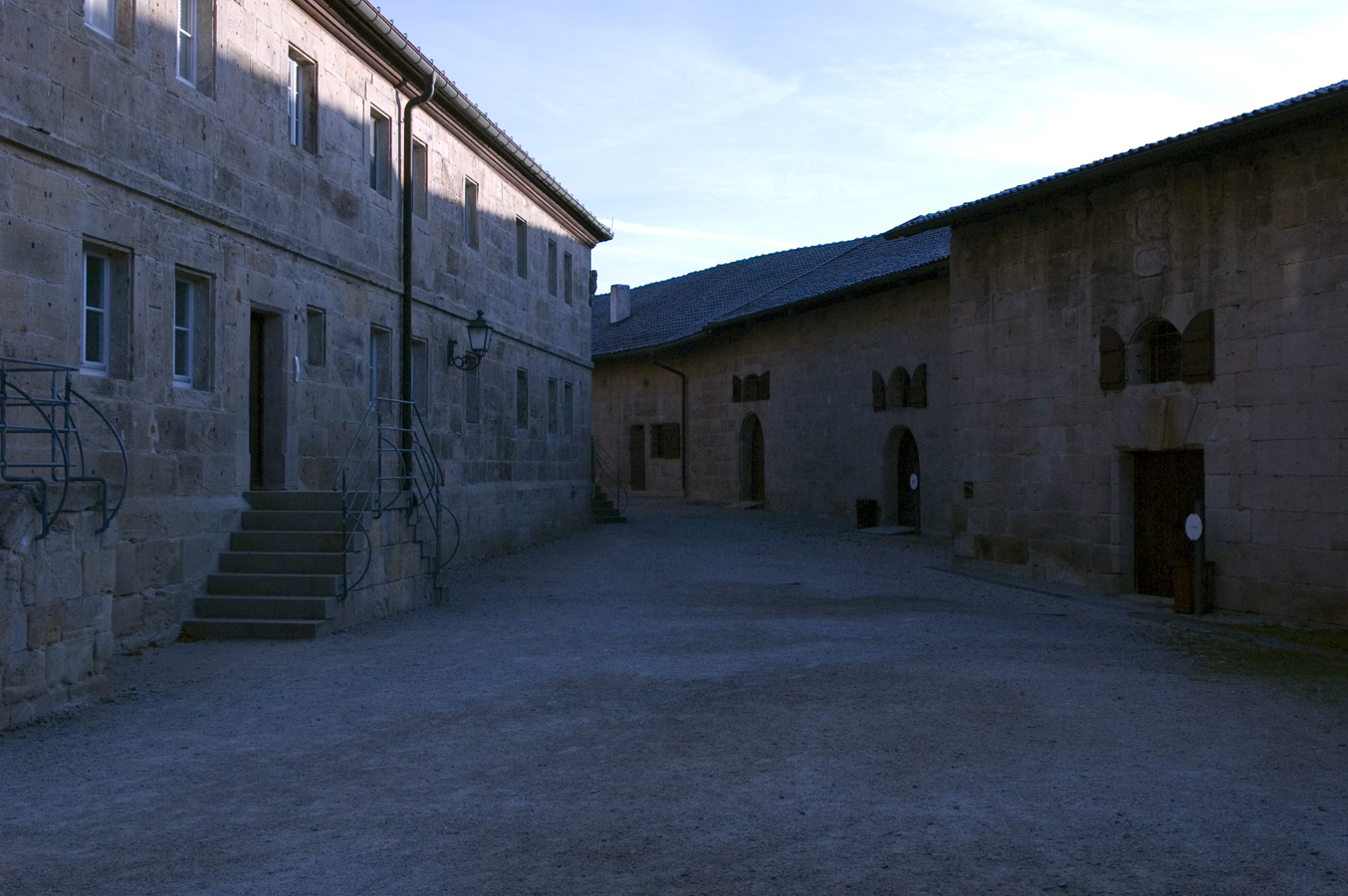 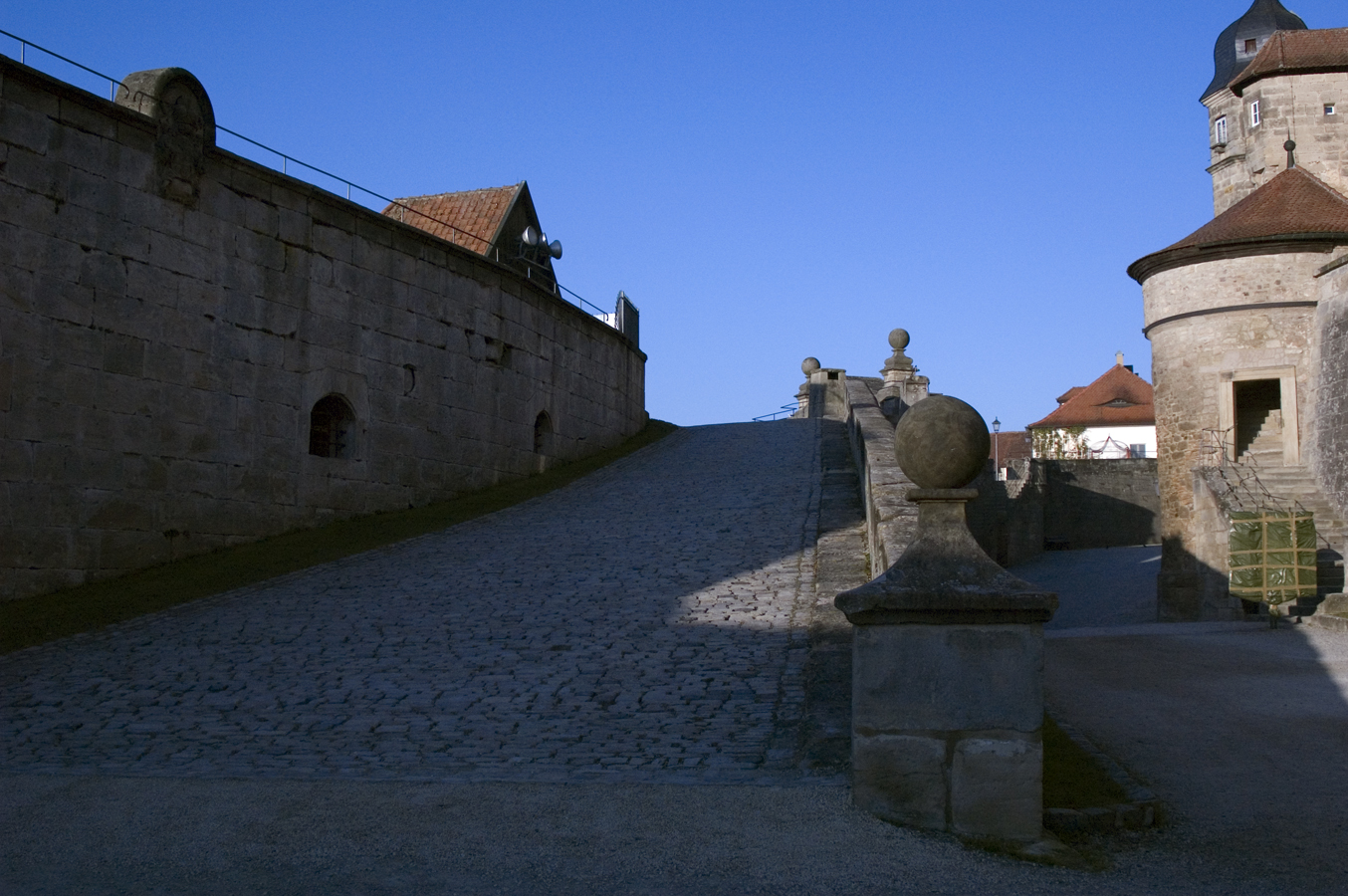 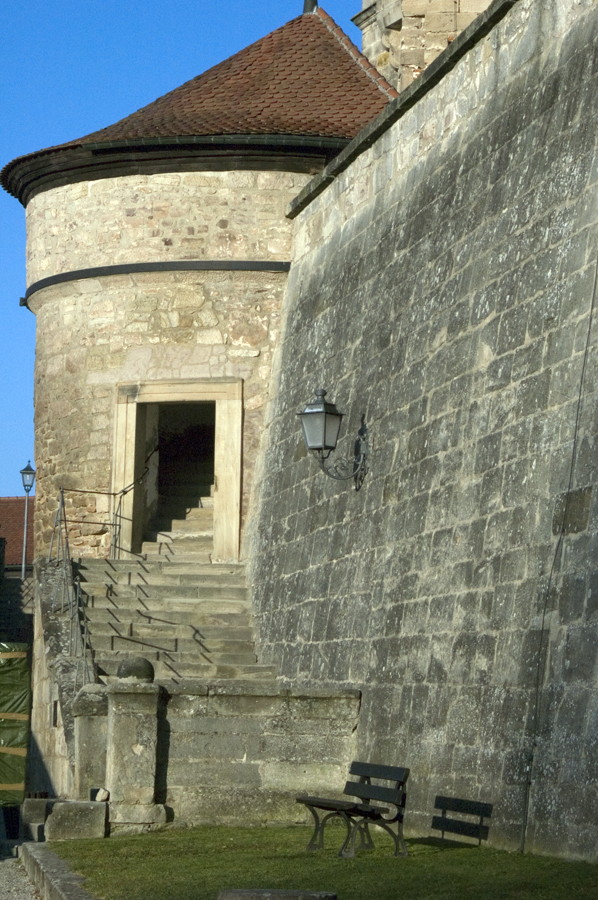 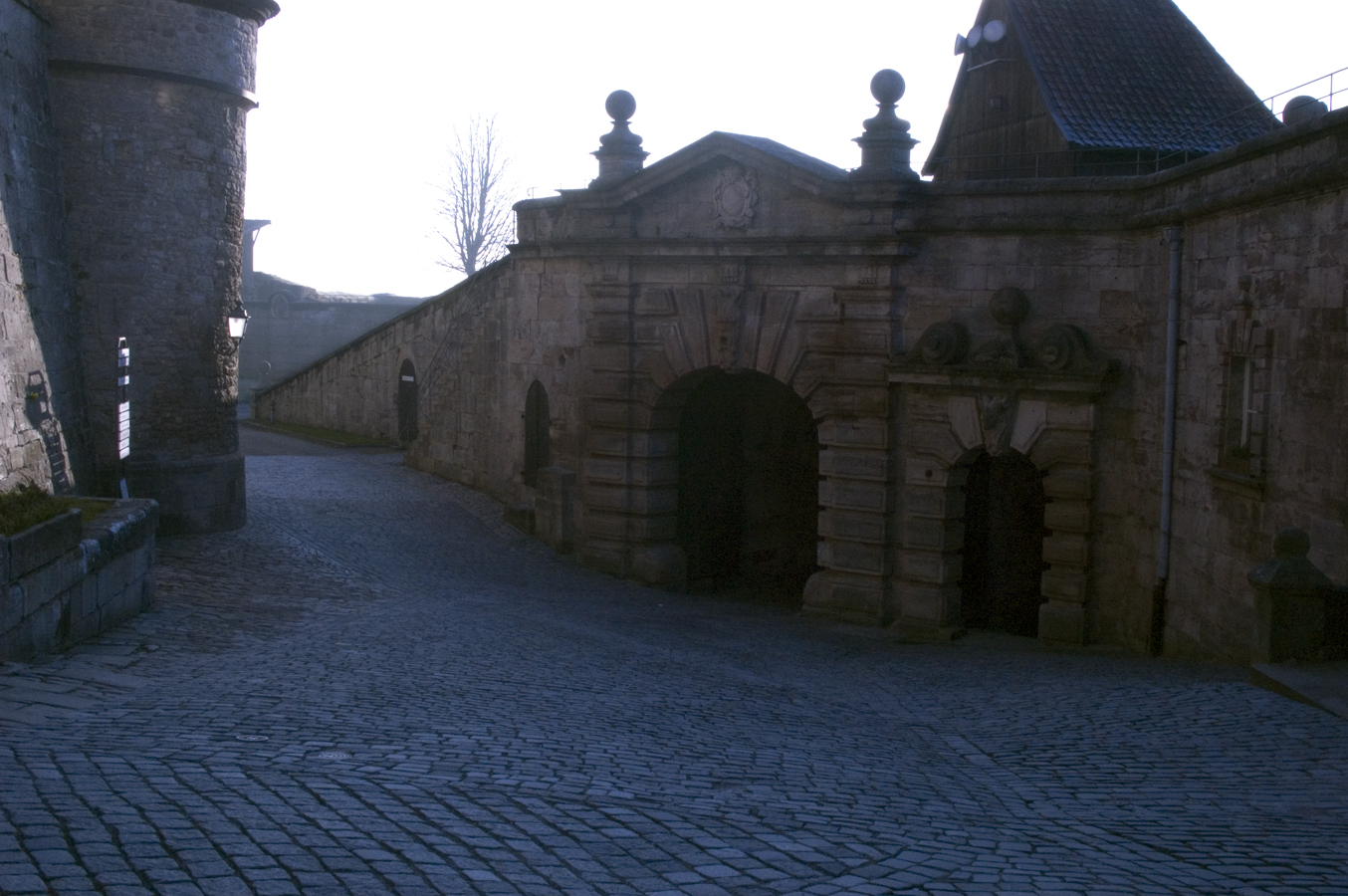 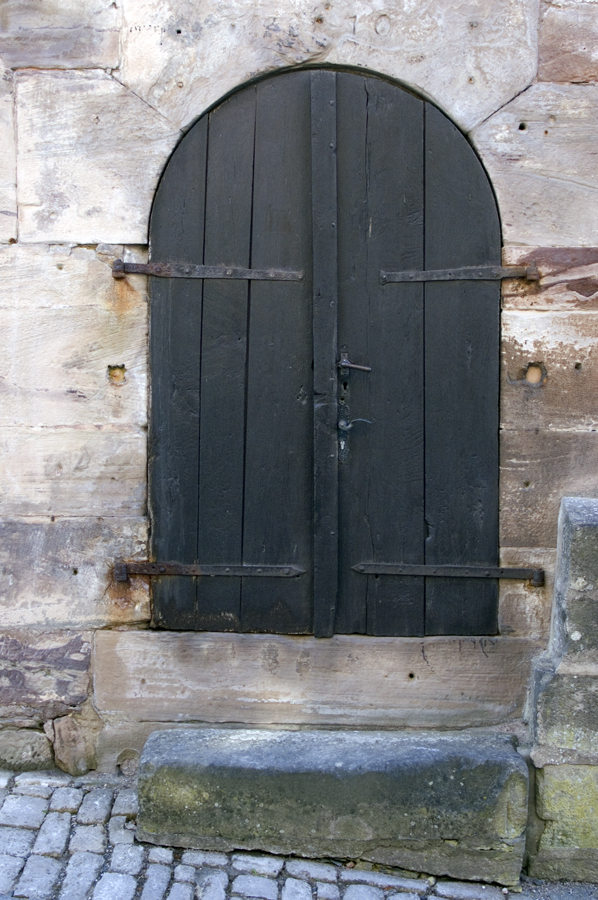 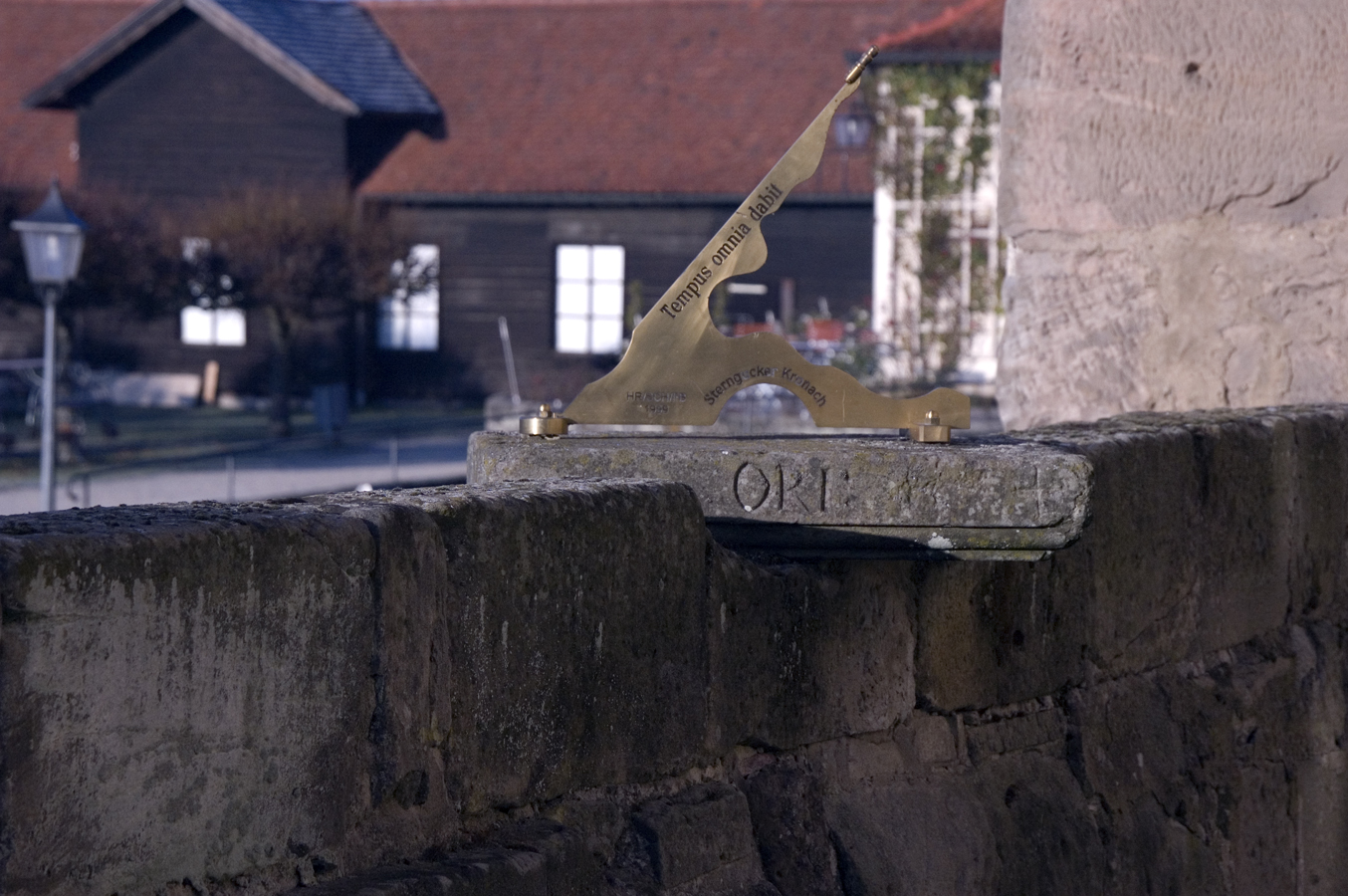 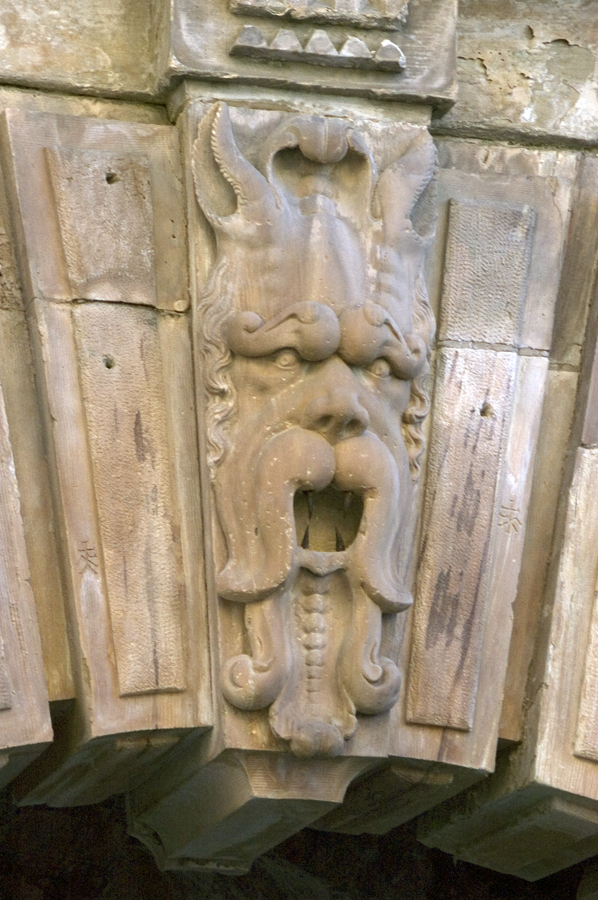 When I paused after taking that last photo, all the bells in the village began to toll in a joyful cacophony! I thought to myself, “Look at me, on the ramparts of a medieval castle in Europe listening to all the bells!” It just doesn’t get any better than that for me!

By far the best photos I got on this excursion were the frost-covered roses that hadn’t had time to wilt before the frost came: 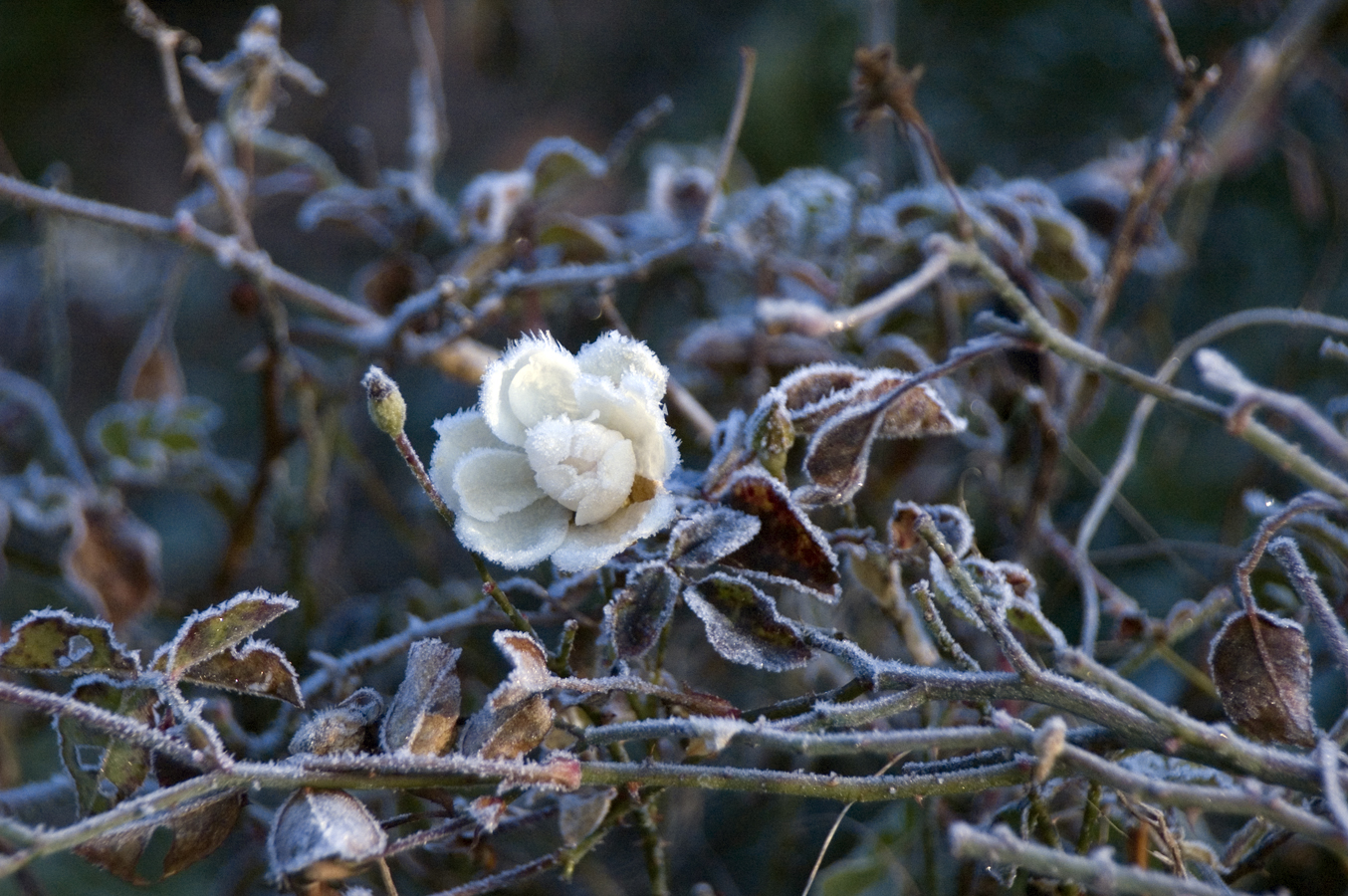 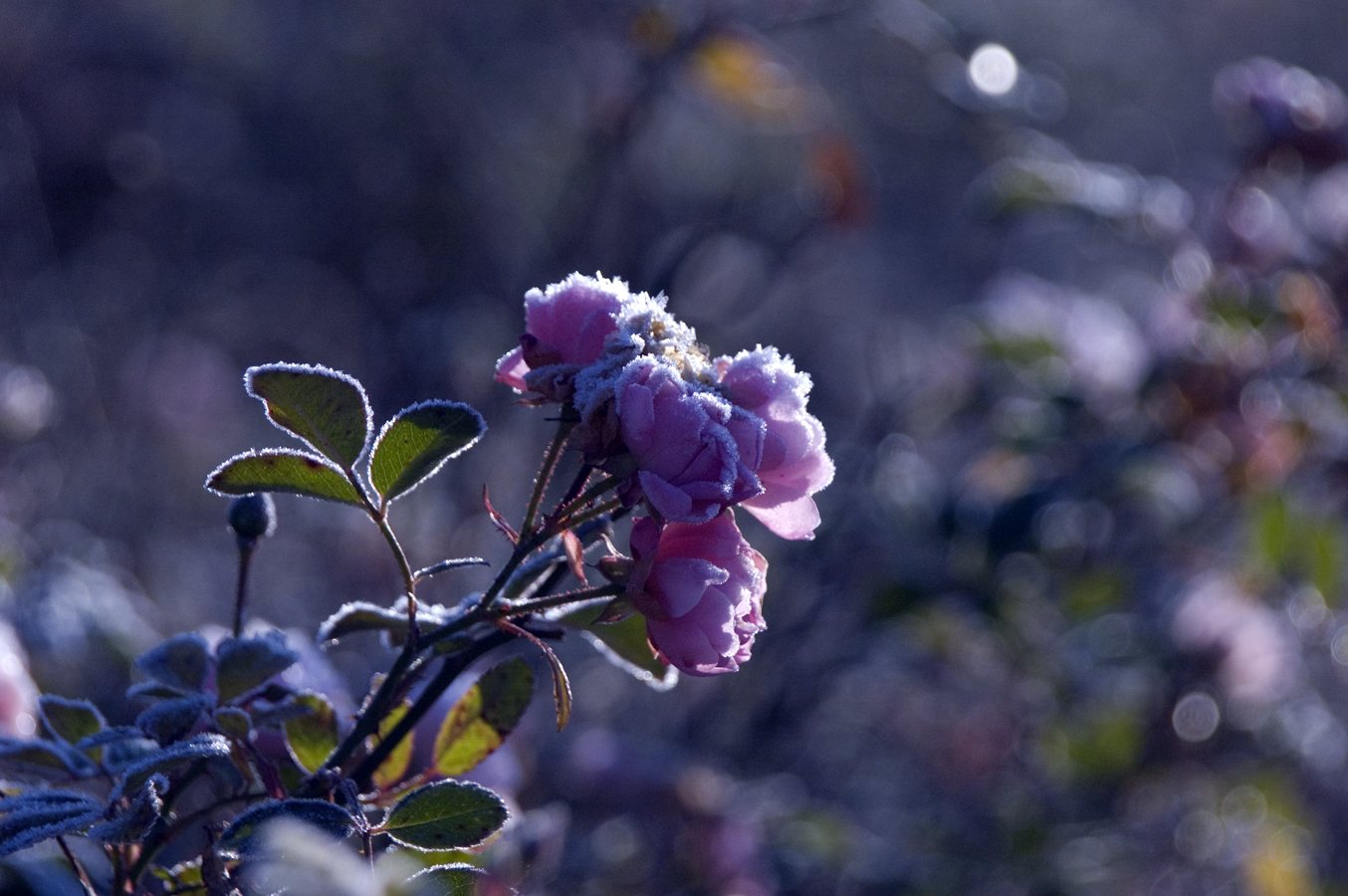 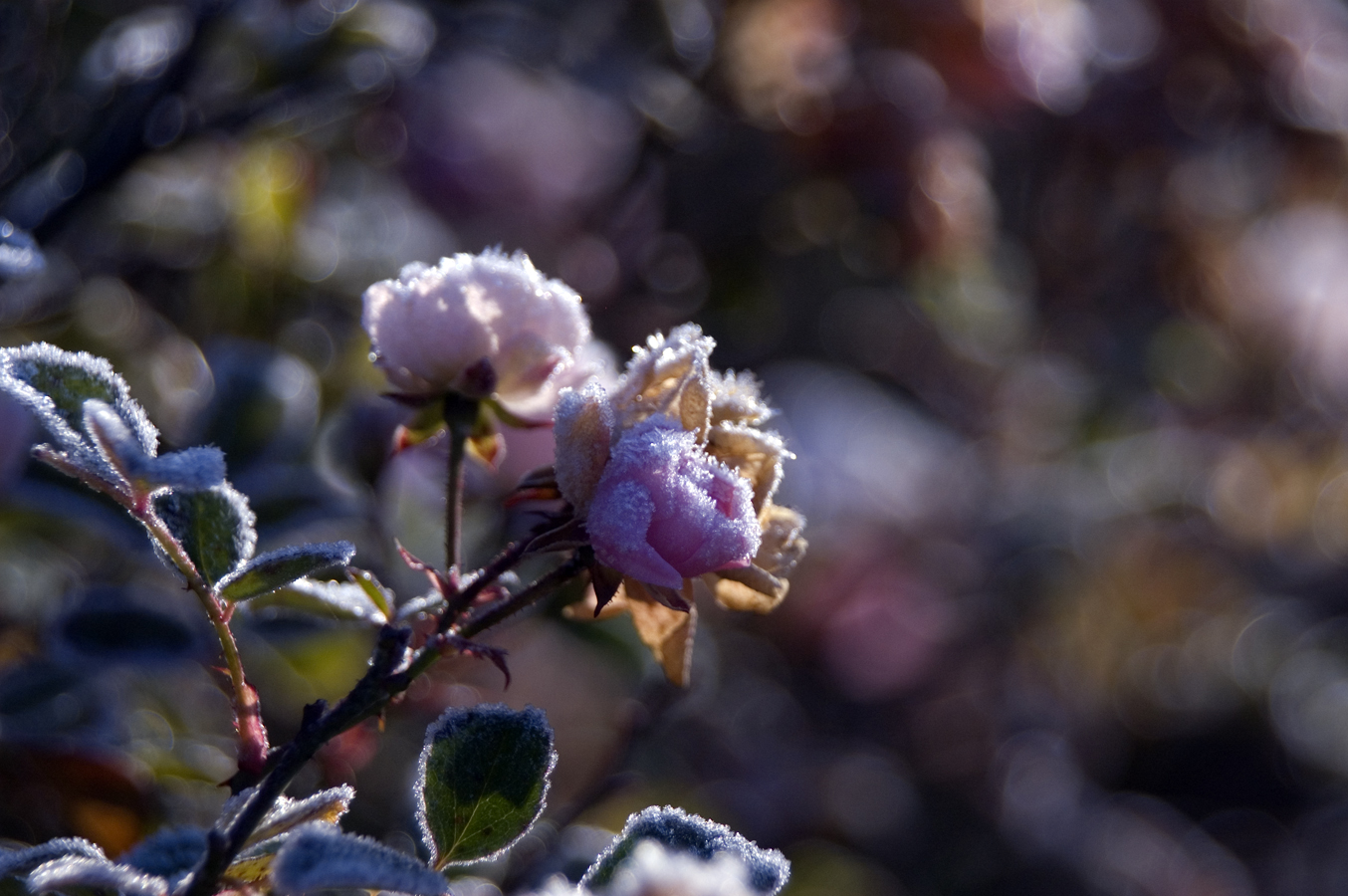 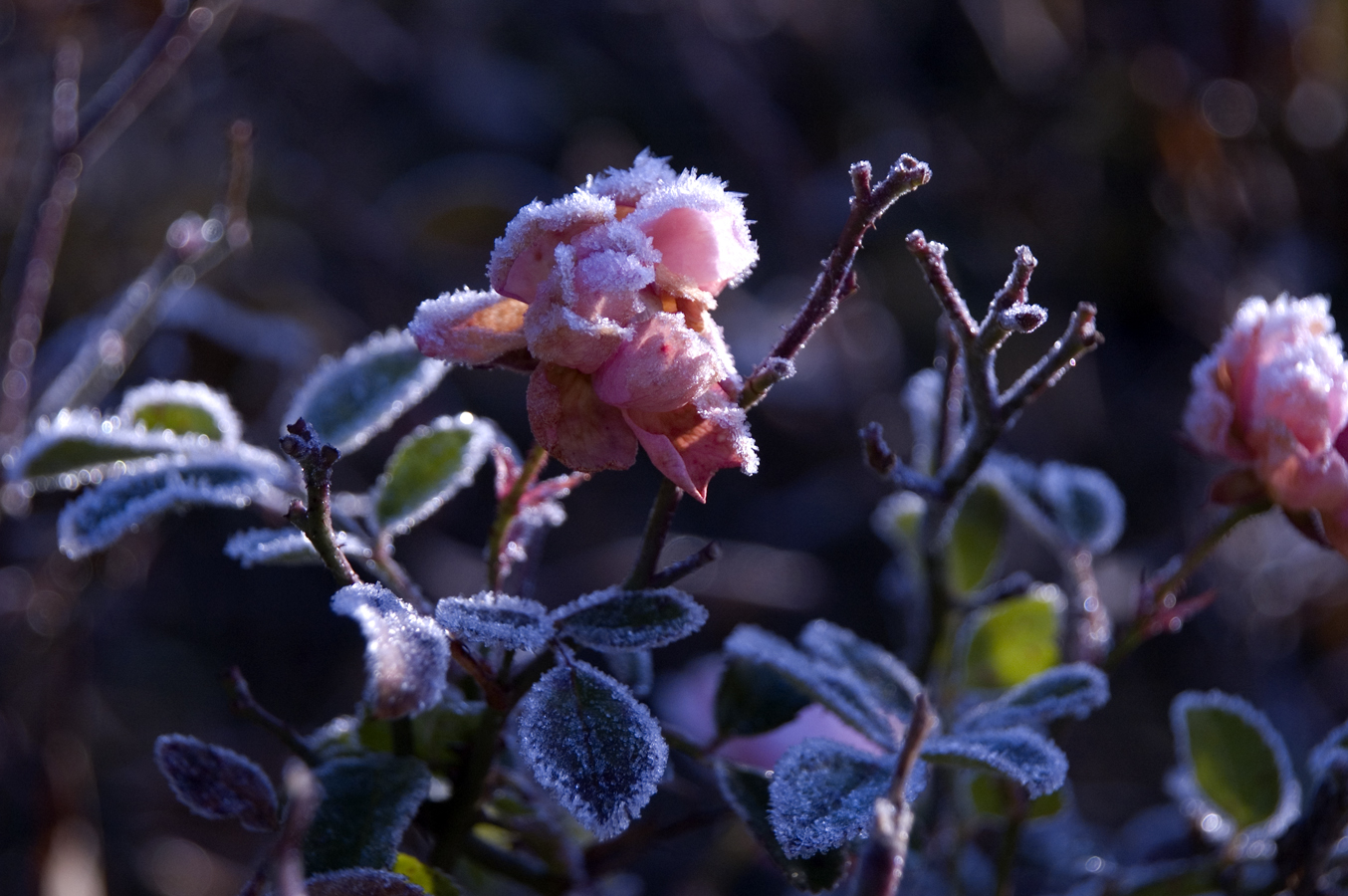 This one reminds me a little of Nightmare Before Christmas: 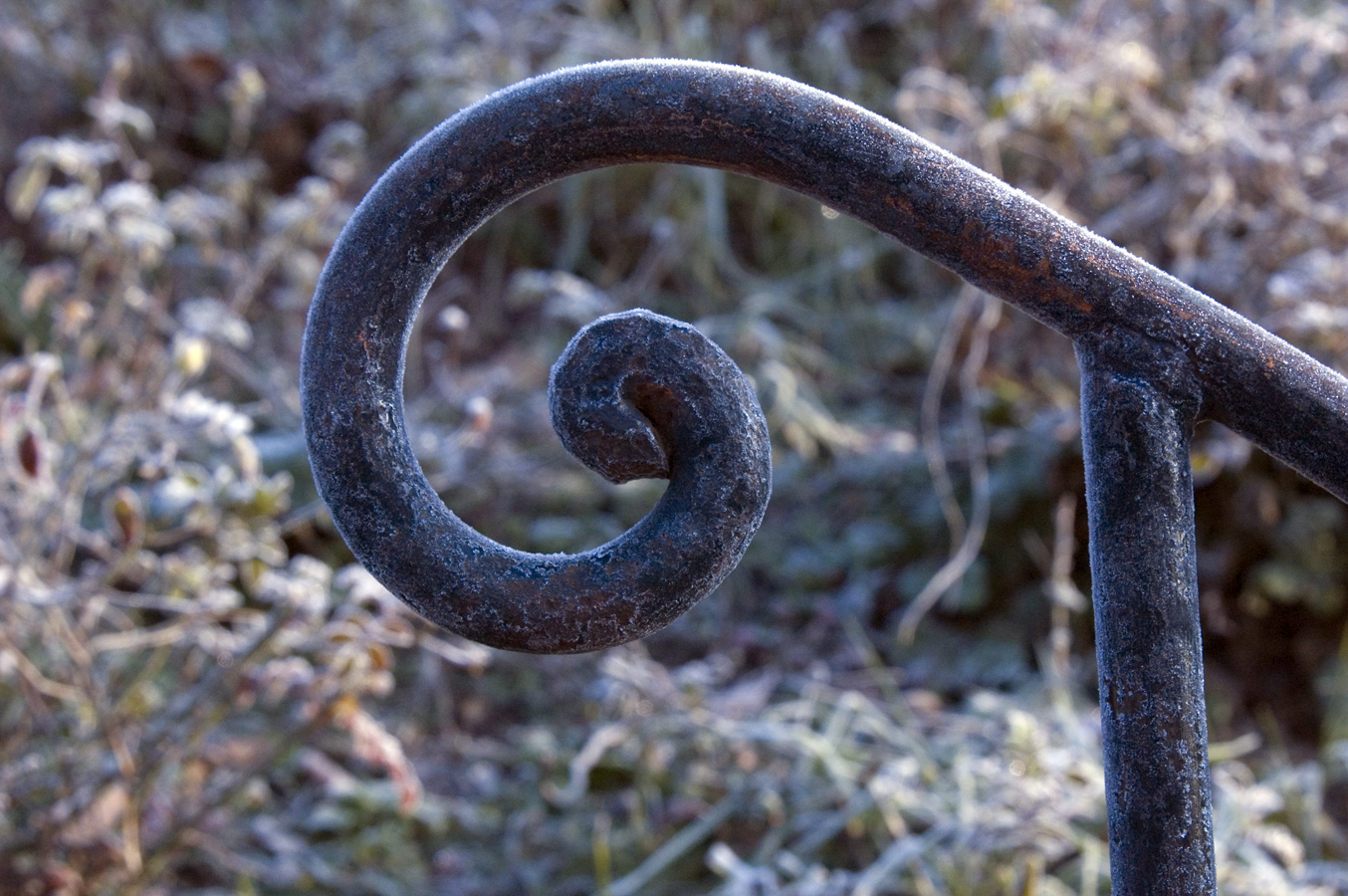 Just about the time I got too chilly, I finished the photos I wanted and headed back to the house where Michael had laid out a veritable feast for breakfast. We lingered long over the bounty, none of us wanting it to come to an end. Alas, I had to get back home and they had a family birthday party to attend.

But what a relaxing, fruitful journey! I look forward to many more visits with these wonderful people. If you’re ever in Kronach, drop into the LeseZEICHEN and tell Annette and Michael I sent you! 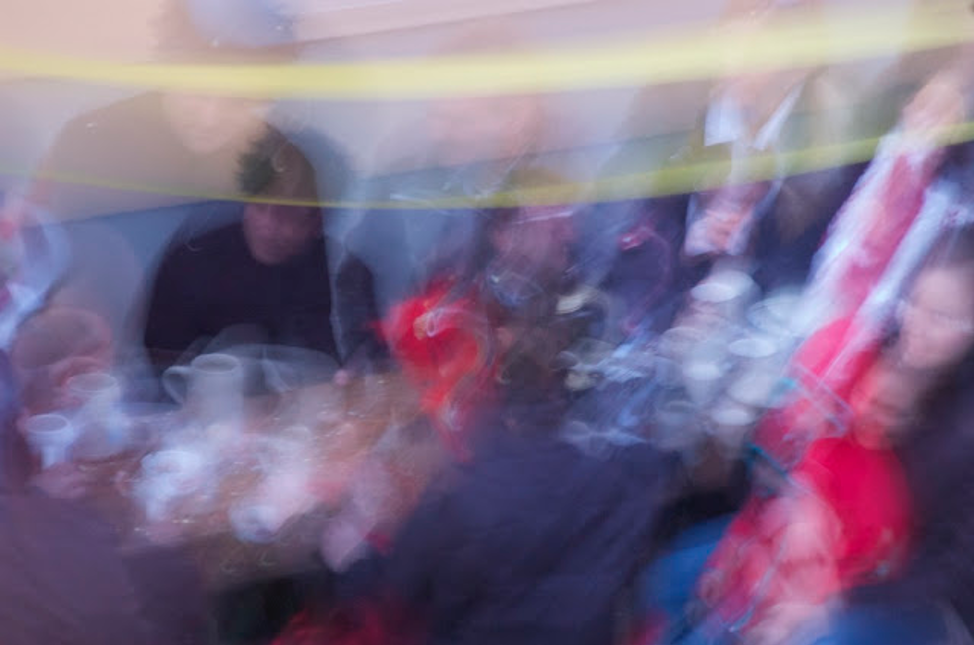