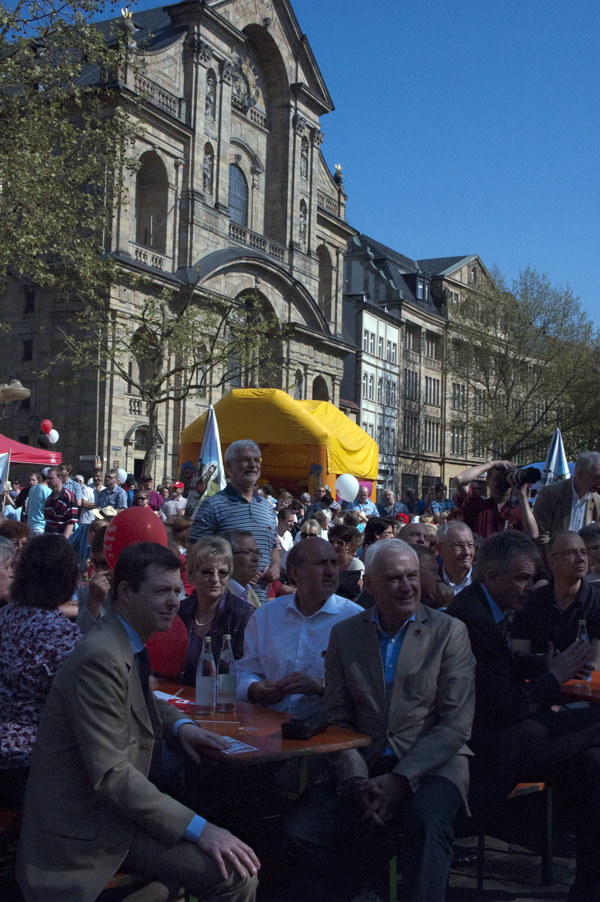 Here’s hoping all of you and your loved ones are safe and healthy. Hang in there and read more ATFT posts! And buy my books! They’re interesting, they have great photos, and you can learn a little something.

FYI, on my photo site, I posted an example of a new technique I’ve been trying called tilt-shift. Visit KomnataChista to see it.

Today is Germany’s equivalent of Labor Day: May 1st. In fact, many European countries have a holiday today celebrating the workers. The banks and most businesses are closed, including the supermarkets. However, cafes, bistros, restaurants and especially beer gardens are in full swing.

Spring has truly arrived here. In fact it’s been downright hot some days. But this morning was beautiful and mild. About 9:00 a.m. a group of guys came singing down the street, which is a traditional thing to do today – of course you have to have your wagon of beer to go along with you: 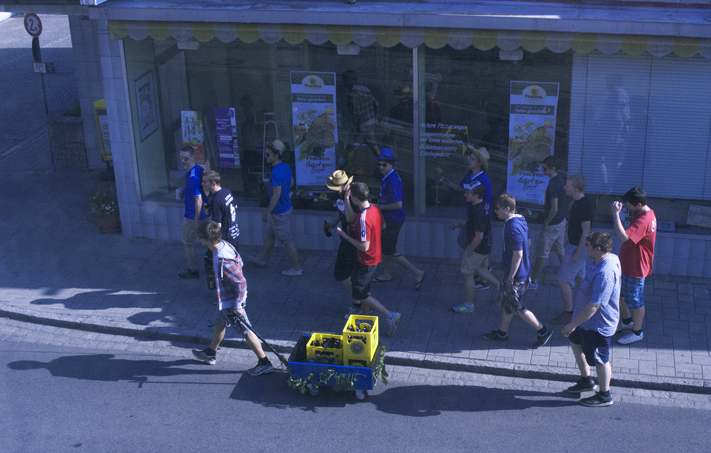 At 9:30 I went to pay my rent to the landlady downstairs. She calls me pünktlich, which means punctual, which is about the highest compliment a German can give you after fleisig, or diligent! Today, since I was earlier than usual on the first of the month, she actually called me überpünktlich! She was so delighted and seemed to have forgotten all about the fact that she yelled at me for leaving the balcony shutter open yesterday while I was out.

After that I set out on this glorious spring morning on my bike whose, name is SchwarzeBlitz (BlackFlash), under a sunny, high, blue sky. I live about six kilometers, or about three and three quarter miles, from Bamberg, so I rode the bike path along the river into town.

There were literally hundreds of other bikes and even more people walking along the path and on the streets. On a day like this, it seems every German is outdoors enjoying the weather, especially on a day off.

My intention was to climb the tower of the historic town hall, which I’d never done, and do some photos I could practice my tilt-shift on and maybe see King Ludwig’s porcelain collection housed in the same building. But as I approached the town hall, I heard music and saw a parade in progress near the square. So I diverted my path to follow it.

The music wasn’t the traditional oompah marching band, but a rousing, fun, fantastic group of drummers in bright colors, almost the Jamaican color theme. It was so great, I’m telling you! They really had the crowd going and the corps leader was so animated that you had to get into the feeling.

I got some videos and a few still photos as I stood as close as I could. What a great show! 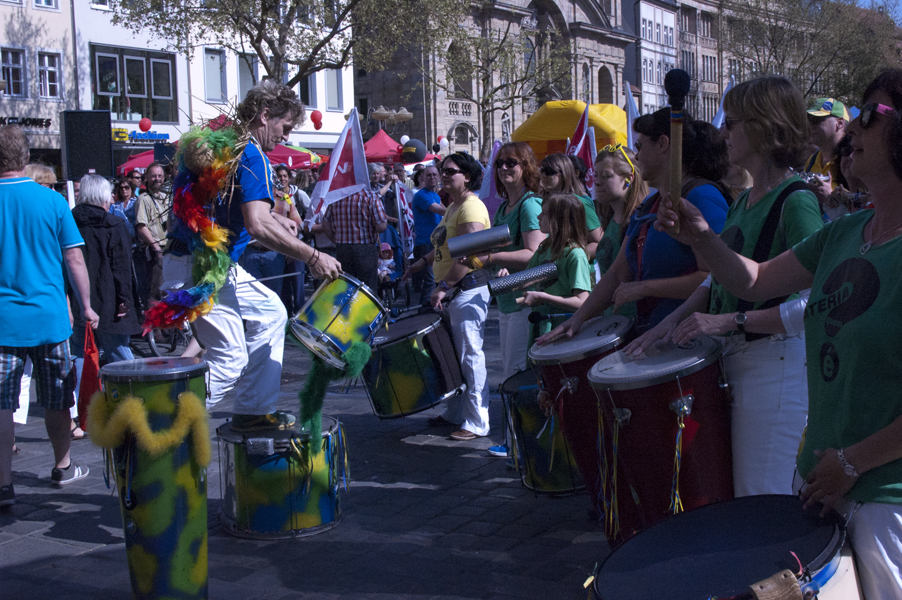 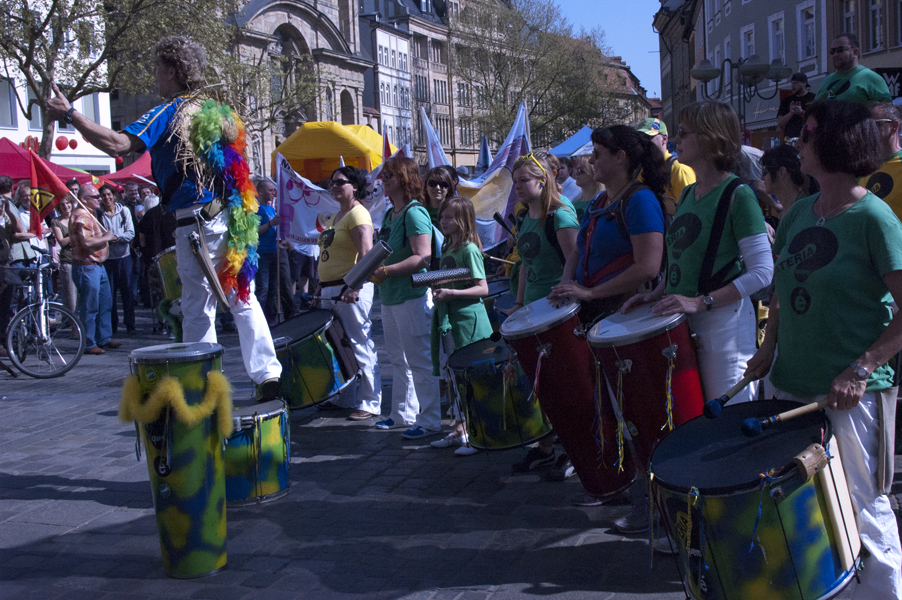 It wasn’t until I was processing these photos that I noticed the corps was composed mainly of women – some of whose clothing was a little see-through from this angle! 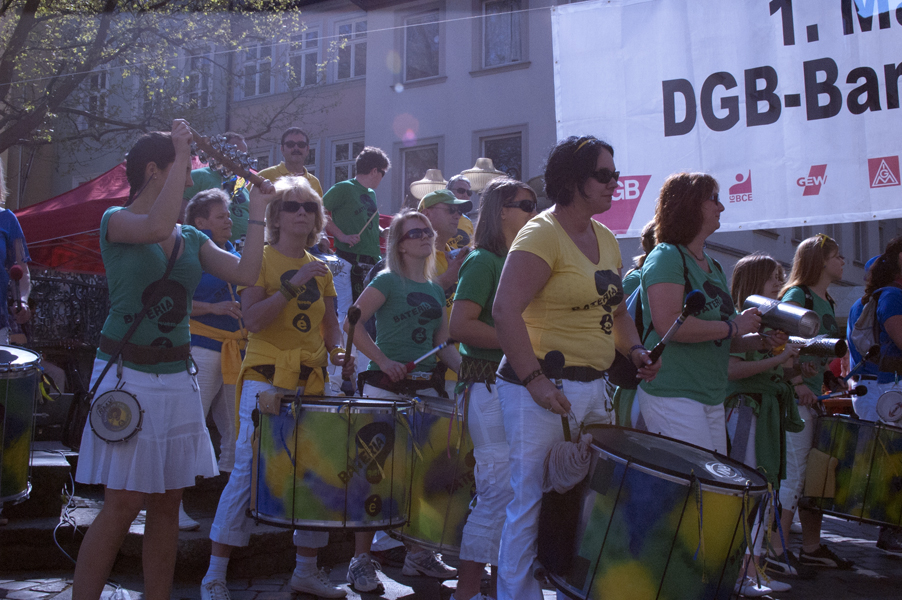 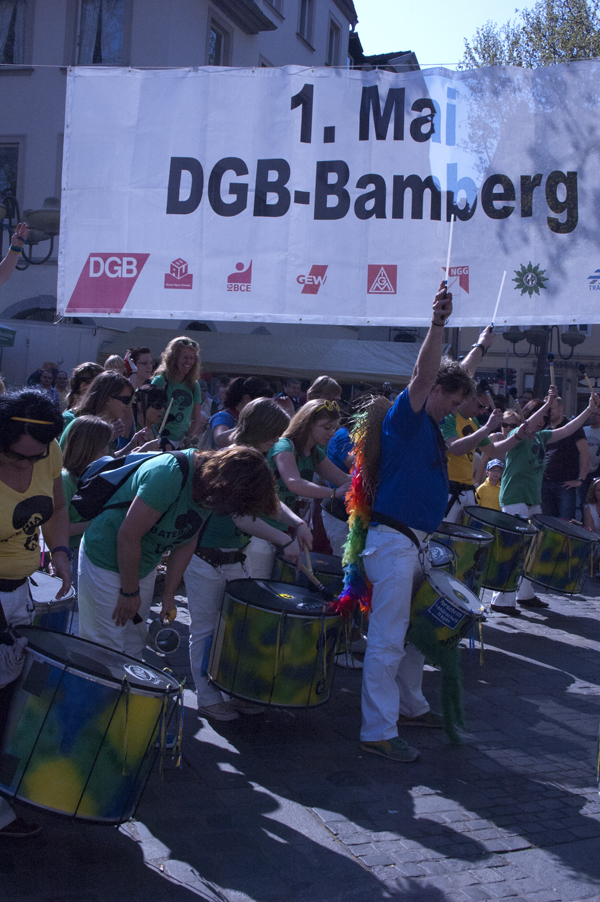 It became apparent that the band had been hired by the DGB, or Deutsche Gewerkschaftsbund. The DGB is the German Trade Union Federation and is the umbrella organization of trade unions in Germany. So, Labor Day, trade unions, guess it makes sense.

Then some suit started talking at a microphone nearby, whom I assumed was the labor union leader, and I heard him call the band something-something Samba Band. He went on to thank people for being there and to praise the workers, etc. Didn’t hurt that there was a beer concession nearby and tables set up for people to enjoy the sunshine. 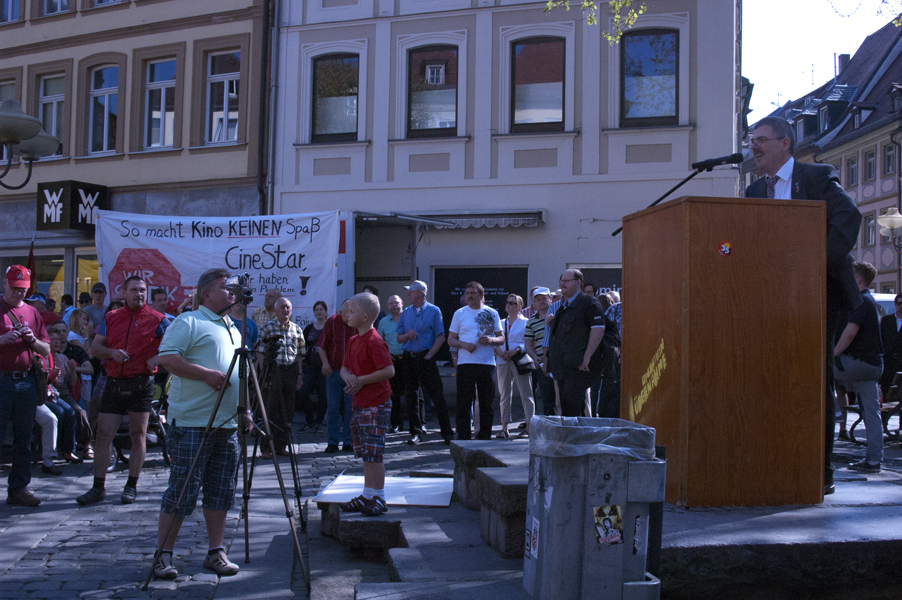 As I drifted away from the festivities, I met a group heading in that direction – probably were going to perform there later (I hope!). They yelled at me (good naturedly) for taking their picture, so I feel duty-bound to post it here: 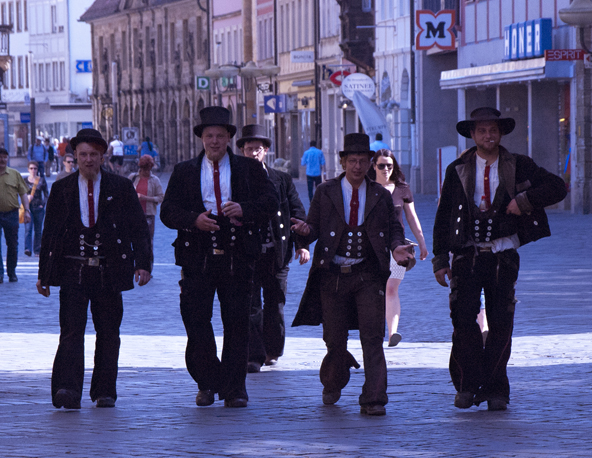 By then I’d decided to skip the tower climb and museum and stop for one of Bamberg’s famous smoke beers. Of course, I had to follow that with some lunch, which totally took away any motivation to do anything else the rest of the day. 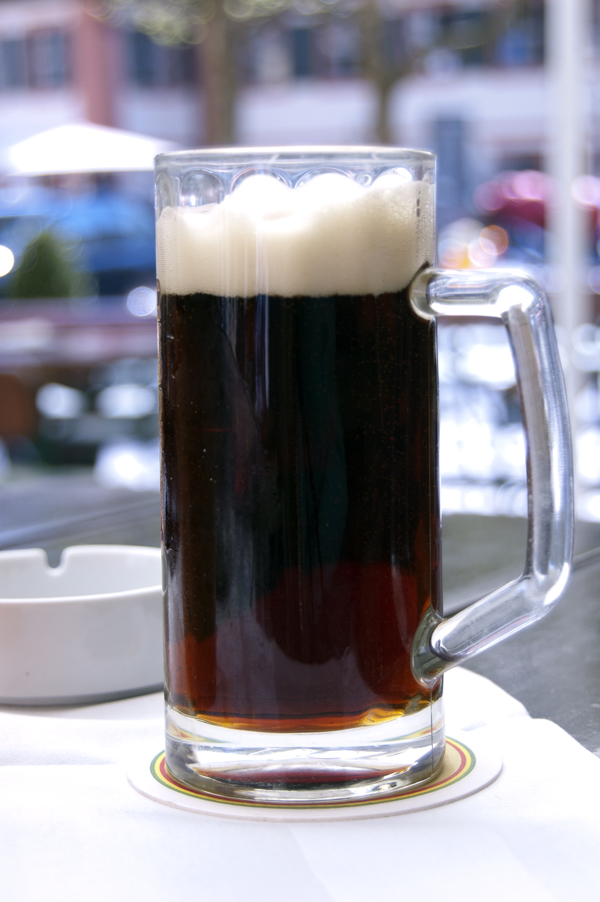 So BlackFlash and I made our way home back along the beautiful river in the wonderful weather. It was too perfect a day not to post this journal right away.

Oh, and here’s a photo of the door in the back of the landlady’s garage, just beyond where I park my bicycle. It opens into her garden, and I just love the way the light falls on the steps. Enjoy, Deb!

I have been daytripping to local towns, so I have a couple more posts in the works. Stay tuned! 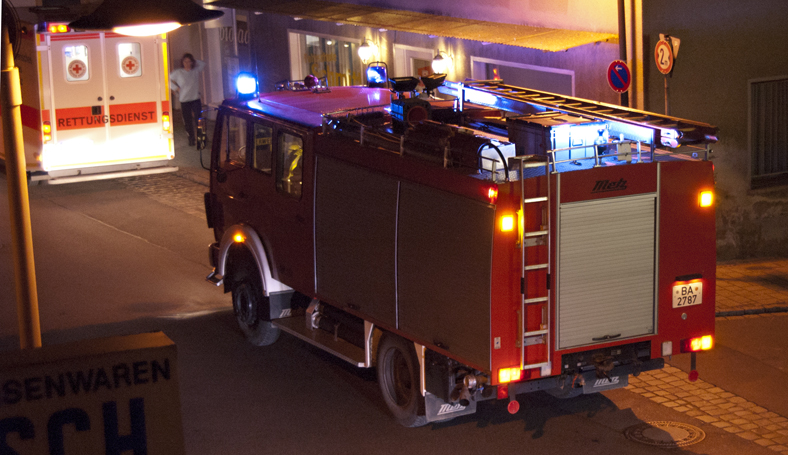