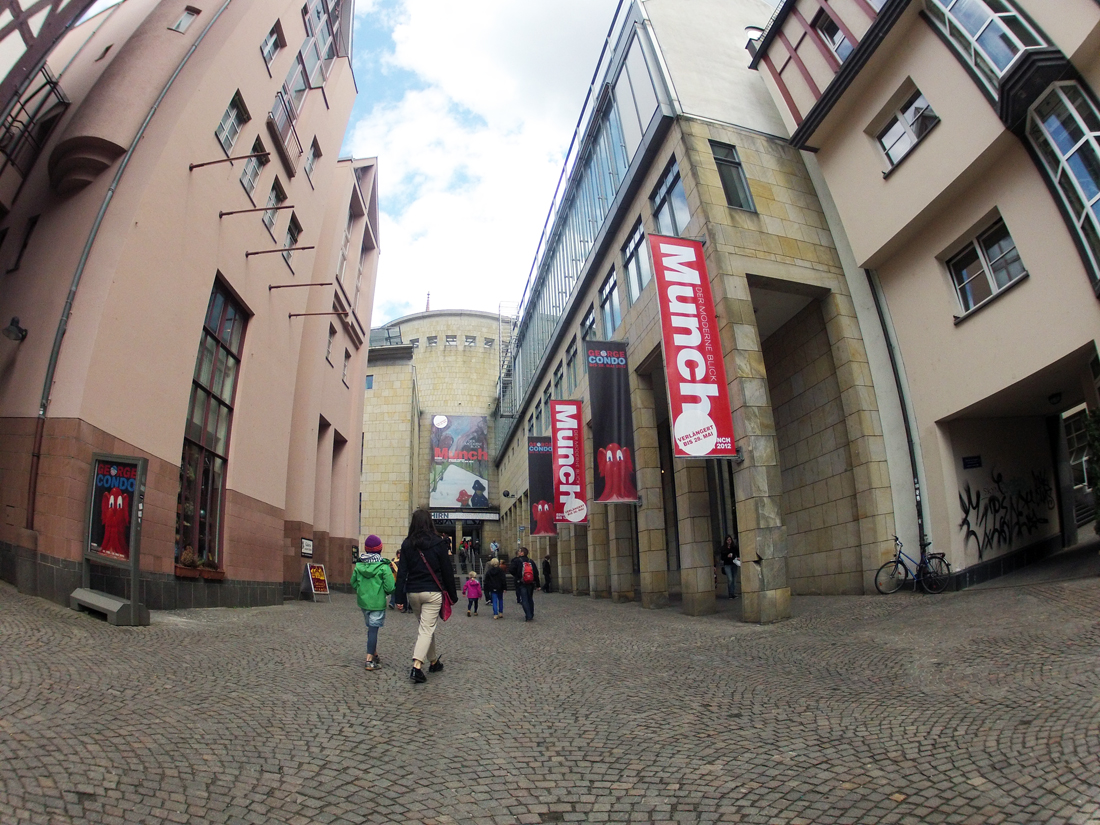 Seven words: Buy all my books on Amazon now!

I don’t really remember how I first heard of it, but I caught wind of an art exhibit in Frankfurt a few weeks ago. The artist was the Norwegian Edvard Munch. Now I know you are hearing the word “munch” in your mind when you read this man’s name, but it really sounds more like “moonk.” Art was one of the reasons I came to Europe, so I made my plans and booked my tickets online in advance.

On a Saturday morning in May I biked to the wonderful new bicycle garage I described in my last journal and secured BlackFlash. Then I hopped a train to Frankfurt. Fortunately this week there were no delays and I managed my connection in Wurzburg quite nicely as well as the one to the Frankfurt subway line that brought me to the Schirn museum.

Of course, I intended to record all of this for you with photos, but best laid plans and all that. My trusty digital Nikon SLR turned out not to be so trusty that day. One memory card had flaked out a week or so ago and the remaining card flaked out that day. It simply refused to take any pictures at all. Man!

However, my husband and I recently got a little GoPro HD video camera that I’ve been playing with. It’s designed for videos in outdoor conditions and for sports such as surfing, racing and mountain biking. That means there is very little in the way of external controls like my Nikon SLR has, including a viewfinder.

But the GoPro does take stills and I quickly read the manual to figure out how to do that. Since I couldn’t see exactly what I was shooting, I had to take potluck. Fortunately, I managed to get a few usable shots from it, and also learned how to extract a still or two from the videos I shot that day. So that’s why the photos in this travel journal look different than my usual ones. I’m just glad I had something to show you from my outing.

Photo from the train window with the GoPro: 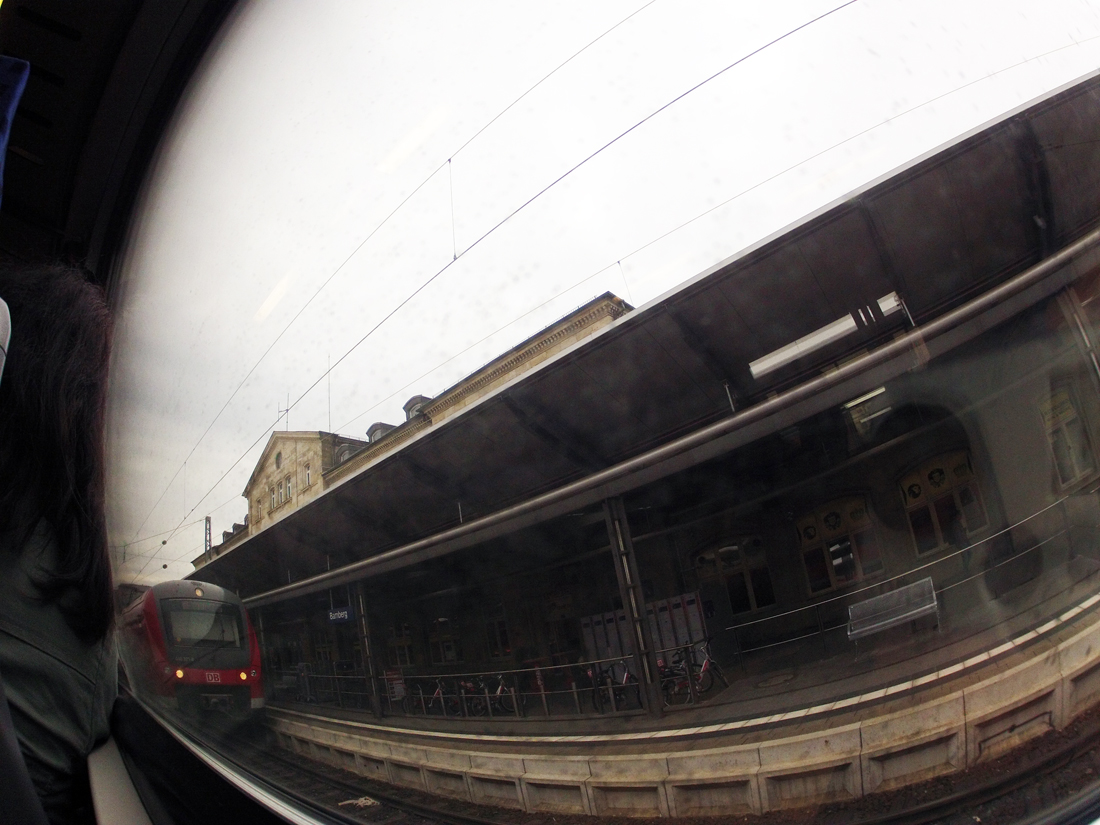 If you’re worried, calm yourself with the knowledge that a new memory card for my still camera solved the problem with my Nikon.

The Schirn Museum in Frankfurt was hosting the Munch exhibit, and, as I approached, I saw slogans painted on the subway tunnel walls and surrounding structures. I popped up above ground at the Römerberg subway stop: 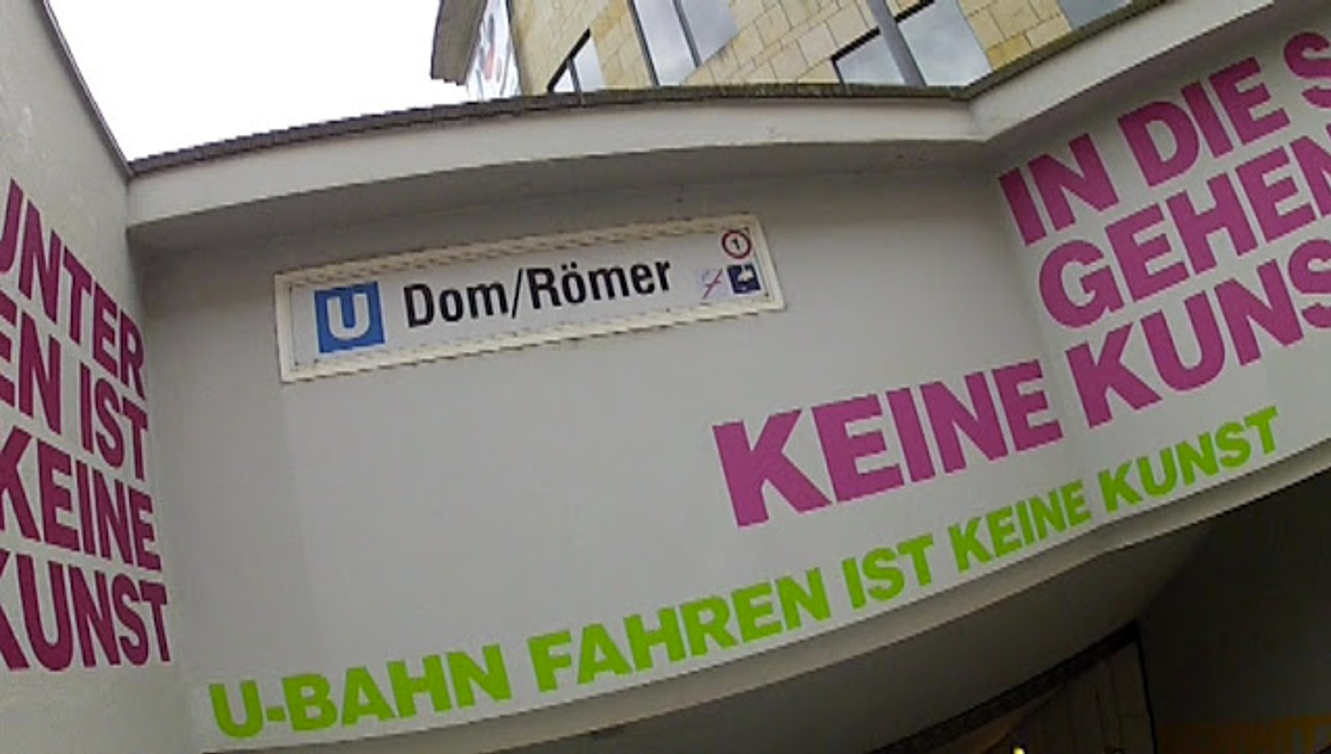 I didn’t know exactly where the museum was, but I took only a few steps around the corner to see the museum entrance. Nice!

Edvard Munch lived from 1863 to 1944, was a prolific artist, and exerted a huge influence on European art. He lived in Norway, Paris, and Berlin. I didn’t realize how much of an impact he had on the art world during his lifetime until I saw this exhibit.

Munch’s most famous painting is The Scream – you know, the Home Alone hands on the sides of the face, mouth open and horrified look in the eyes? Munch actually painted four different versions of The Scream, along with some sketches, and two of them were famously stolen some years ago – and fortunately recovered. A third version was sold at auction a few weeks ago for $119.9M, a record sale for any artwork, even adjusting for inflation.

This exhibition was in Paris before it came to Frankfurt, and it is a big deal. In fact, the Norwegian royal princess was present at the opening. Check out a video here.

Although The Scream is not part of the Frankfurt exhibit, several other of Munch’s well-known images are on display. And, just like The Scream, Munch painted many of his subjects in different versions at different times with different techniques.

I have to say that the Schirn is a wonderful venue and quite big. There was a big crowd, but the people flow was fairly constant because of the floor plan. Munch painted gratifyingly large canvases, so the artwork was easy to see as well.

As a former art gallery director, I appreciated the layout of the exhibit. Exhibitors have several choices about how to hang a group of artwork, including in chronological order or by related subject matter. Since Munch painted the same subject in different ways and sometimes years apart, they chose to group the paintings by subject matter. Therefore, it was easy to see Munch’s evolution as an artist. I love to detect such trends in artwork and literature, so I was very happy that they’d made it so easy!

In addition to paintings, Munch also experimented with a still camera. The photos on display were quite small and consisted mostly of long exposures of himself, sometimes with his own artwork, at his house, his studio or even the hospital. The Schirn even had several short videos Munch took.

To me it looked like he was just trying out the cameras. But there were lengthy analyses of the videos and photos posted alongside the displays about what we could tell about the artist from his photographic work. I disagree – I think you can tell more about him from his paintings because the images were filtered through his mind, not simply recorded on film. Some of the explanations were a little out there. It’s amusing sometimes how art critics assign meanings to artworks that may not have been intended by the artist.

For example, one of the videos was a segment of horses pulling fire engines responding to a fire alarm. Two engines were each pulled by a team of four muscular white horses. The horses were galloping almost straight toward the camera and you could see how deep-chested and powerful they were. In another segment of the exhibit, there was a painting of a galloping horse, obviously taken from the video.

Munch managed to convey the movement and power of the horse in just a few strokes of the brush. THIS is why I think the paintings tell us more about the artist than the videos do.

Of course, the Schirn doesn’t allow visitors to take photographs inside, so I have no photos from inside the building. But I found a book in the museum shop in English of Munch’s life and work that I am quite happy with.

After seeing the exhibit and perusing the gift shop, I was ready for lunch. Frankfurt isn’t known as a tourist mecca, but I was in the most touristy area of the city, Römerberg.

Many moons ago I visited there, so I knew there was no lack of traditional German restaurants in the neighborhood. I stopped at the first one I came to, only about a half a block from the museum. It was just warm enough to sit outside where I had my requisite beer, pork and sauerkraut. Here are some GoPro shots from my table: 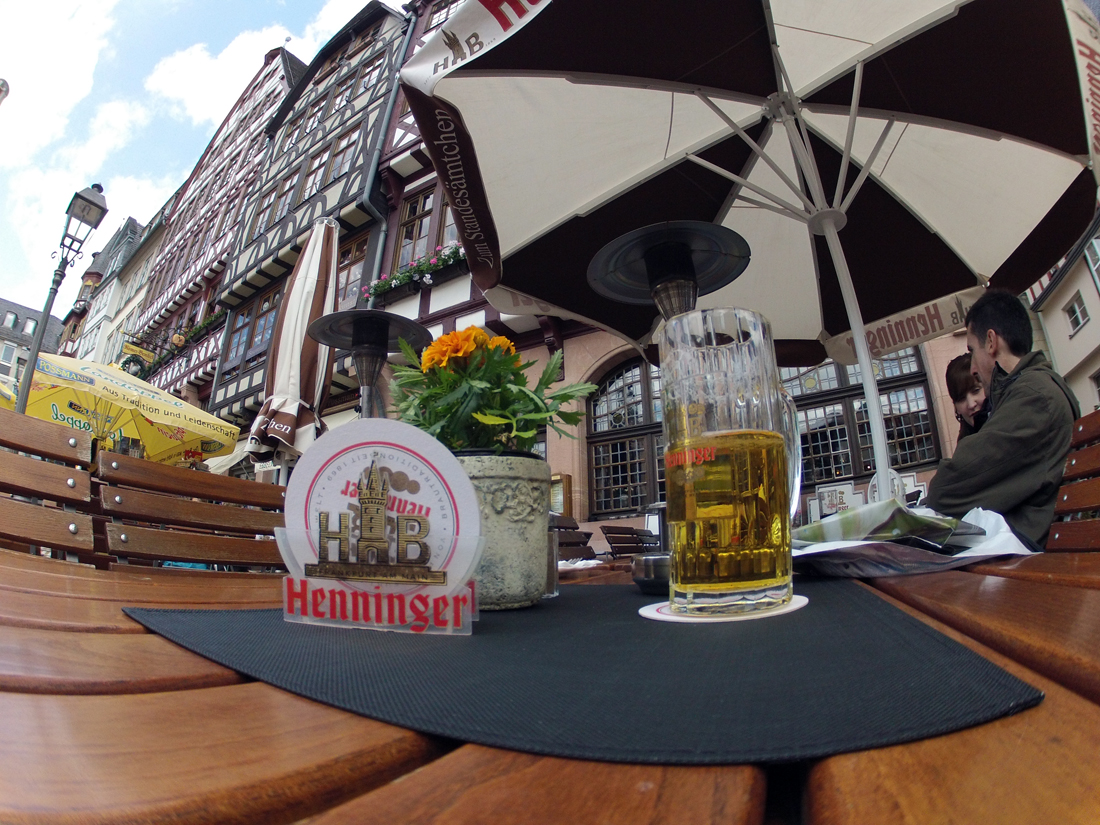 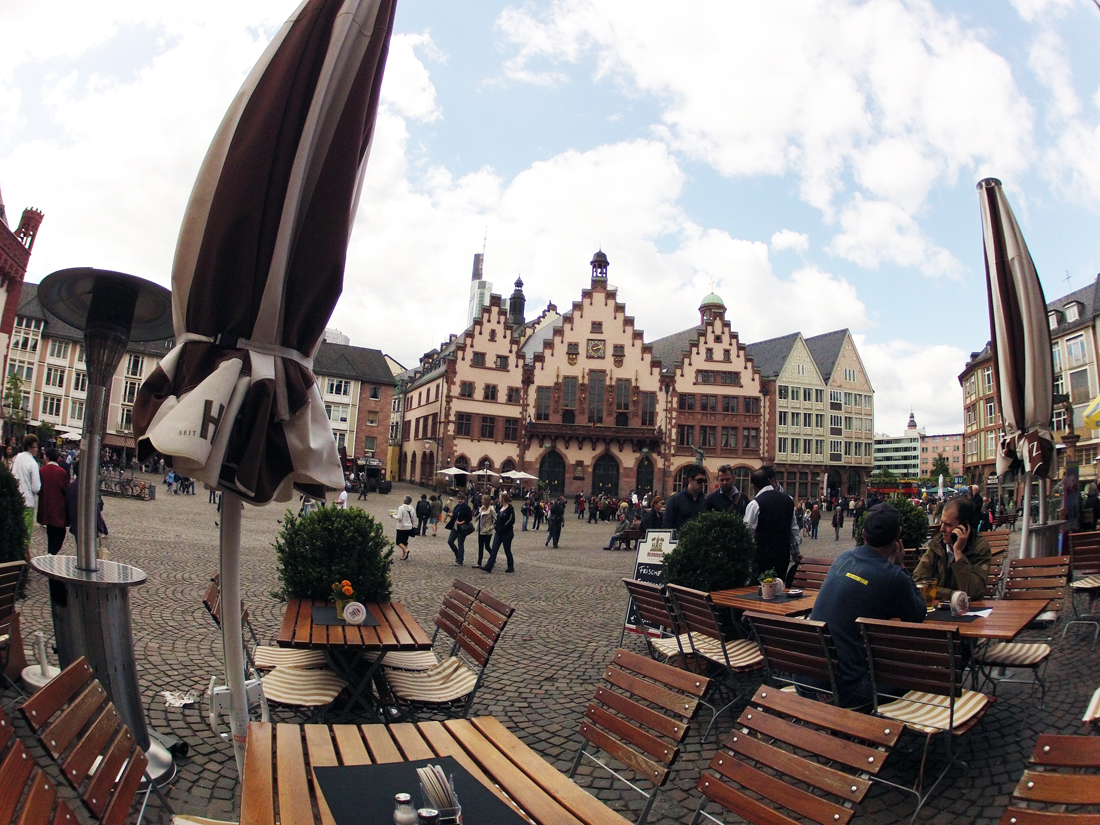 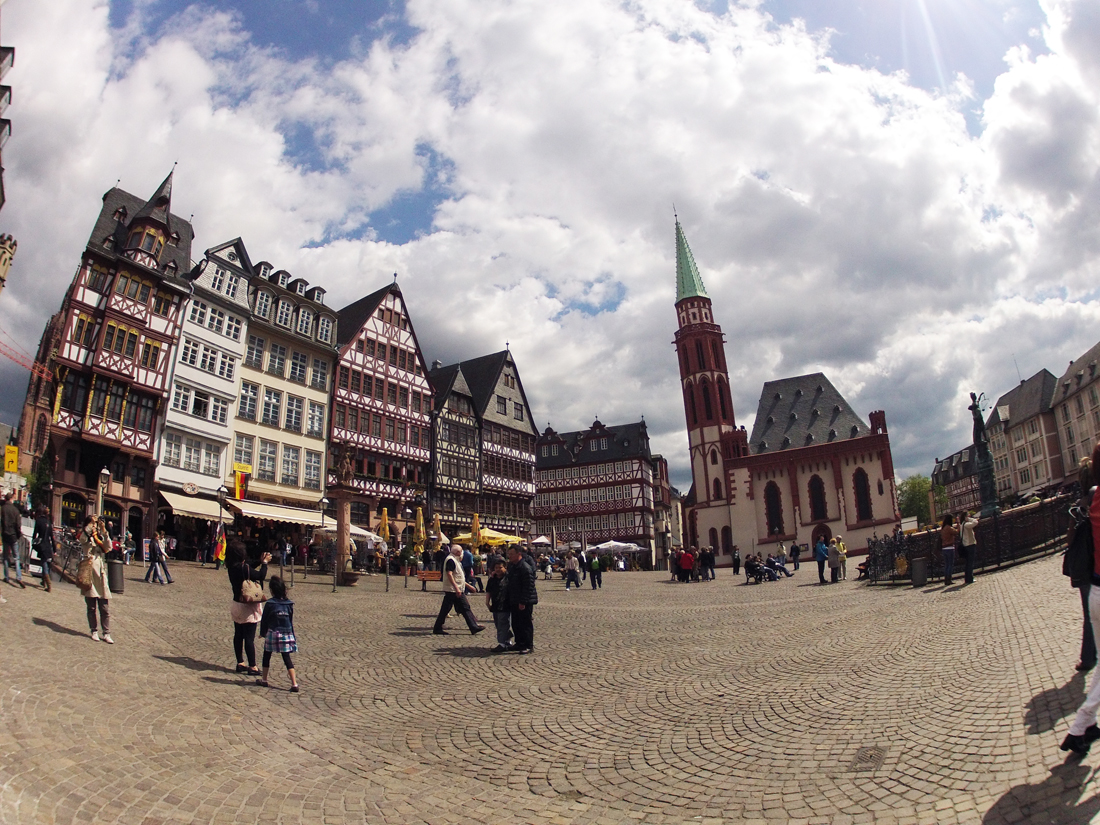 After lunch I walked a little but there is not much to see unless you like glass and steel office buildings that are closed because it’s Saturday. So I made my way back to the train station and treated myself to a Starbucks before catching my train.

However, my train was about 40 minutes late, so I missed my planned connection. However, I knew that there were plenty of later trains I could take. Turns out that, when my late train arrived in Wurzburg, the next train to Bamberg was waiting just on the other side of the platform. So I waltzed onto it, found a seat, and was on my way.

I arrived only about a half hour later than I originally planned, but it was almost 9:30pm. Fortunately, BlackFlash has a very bright LED headlight, so I wasn’t worried about riding home in the dark.

When I got to the bike garage and inserted the card into the machine, the machine spit it back out and told me that parking was free that day! Bonus!

A further bonus awaited me in my bike basket: a book of German poetry! It was wrapped in plastic with a sticker on the outside that said “gift from the author” in German. I have no idea who left it there, and I don’t know the author, but it was a nice surprise!

So that’s my Munch adventure. I hope you learned a little something from my outing. Stay tuned for another wonderful visit to an art gallery here in Bamberg in my next post! 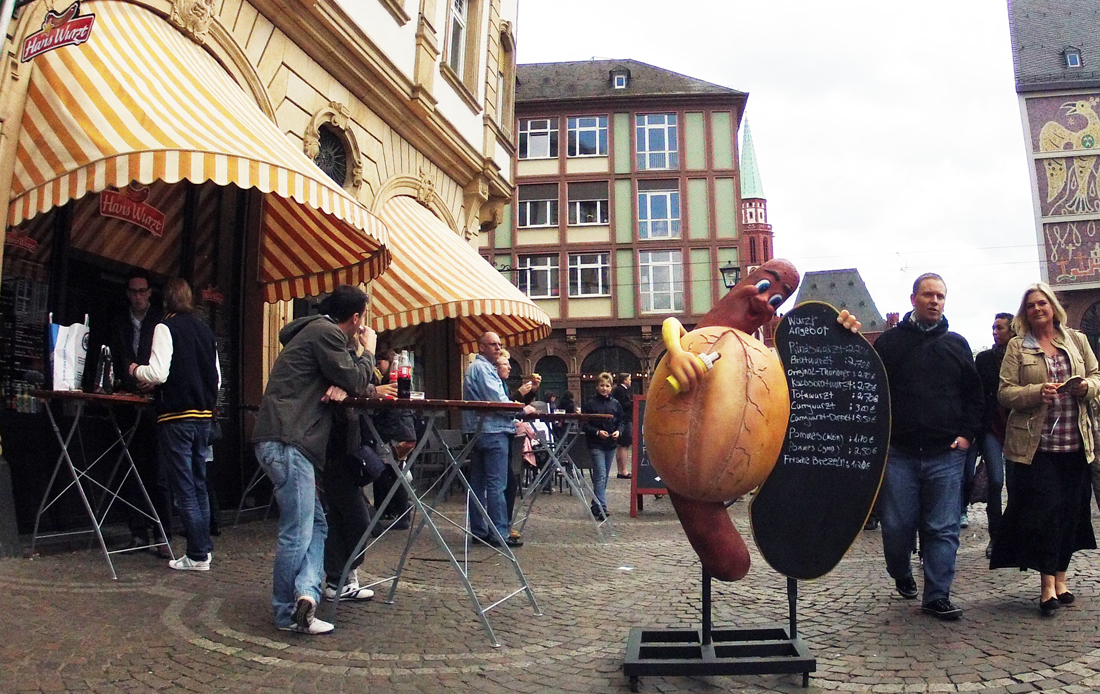