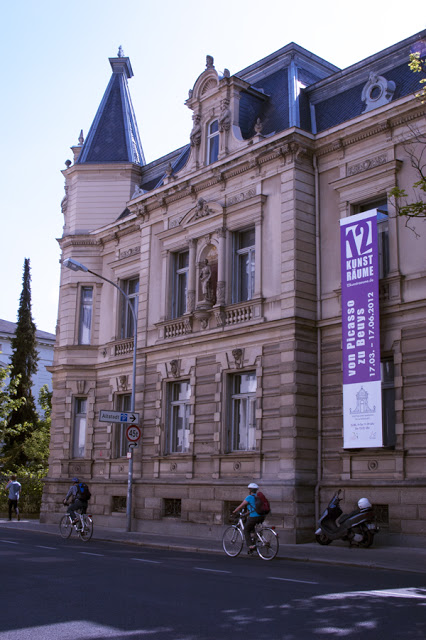 Shop all my books!

A couple of weeks ago I visited a great art exhibit here in Bamberg. I’d had a rather good week anyway, and a student sent me flowers at school for helping him prepare, linguistically, for his upcoming move to South Africa: 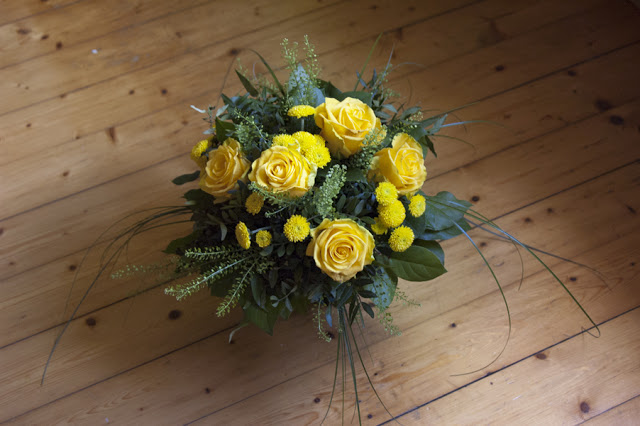 As you might surmise from my previous posts, Bamberg isn’t exactly known as an art mecca. It’s more well known as a beer center, even billed by the tourist bureau as Bierstadt, or Beer City.

However, I had seen banners around town advertising an art exhibit titled Zwolf Kunsträume – von Picasso zu Beuys (12 Art Rooms – from Picasso to Beuys), works of world famous artists through the 20th Century. 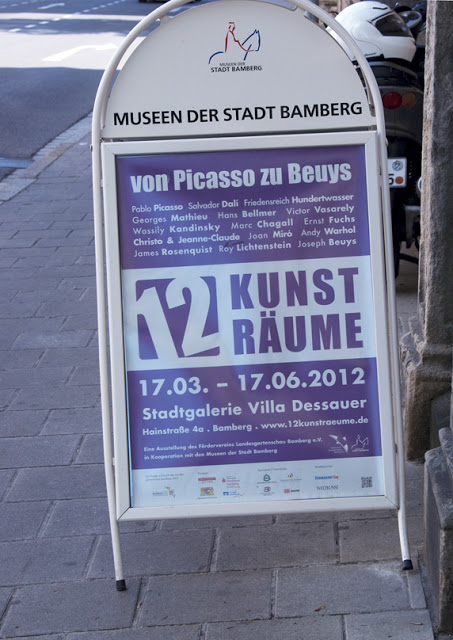 This exhibit was being held in conjunction with the Bayerische Landesgartenschau (Bavarian Garden Show), a really big deal around here. I plan to visit this show at least once, and you’ll see a future blog post about it.

I resolved to see the art show, of course. Turns out the exhibit was being held in the Villa Dessauer historical mansion in the upscale part of town. I’d wanted to see this building for a while, too, but hadn’t been able to find it open. It’s only open for special shows, so this was my chance. I took BlackFlash and rode into town to this lovely mansion.

Villa Dessauer was built in 1884 by a Jewish hops merchant named, of course, Dessauer. It’s a huge, imposing structure in neo-Renaissance style.

I had a rather hard time tracking down any information about this building online, but here is what I’ve been able to dig up:

Dessauer was one of the richest people in Bamberg and the house was definitely a status symbol. Apparently the official opening of the house was a grand ball.

Dessauer hired an architect out of Hannover named Geb to build it. The outside has classical features such as this statue set in the center. She is holding an anchor in one hand, which, in Renaissance symbology, means safety and hope. The other arm, which you can’t see in this photo, carries a caduceus, which symbolizes commerce. It’s the same staff with snakes that often denotes the medical field today. 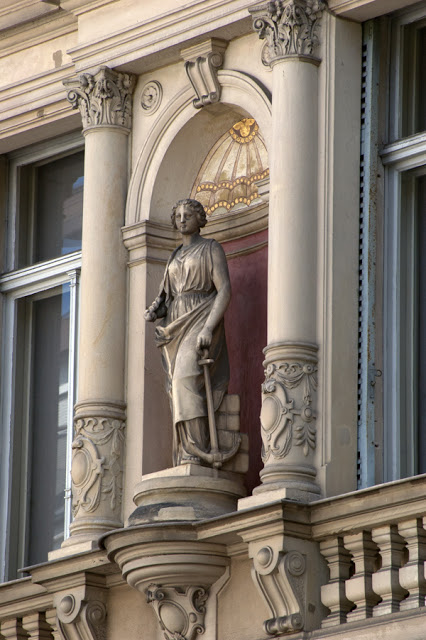 The upper dormer has caryatids: 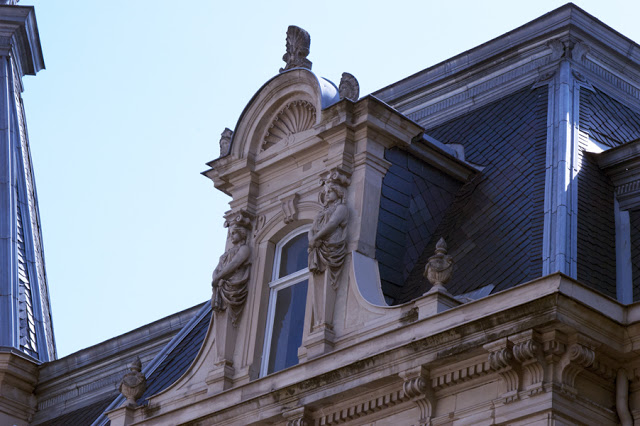 Near the pavement, there’s even a door for my friend Debbie: 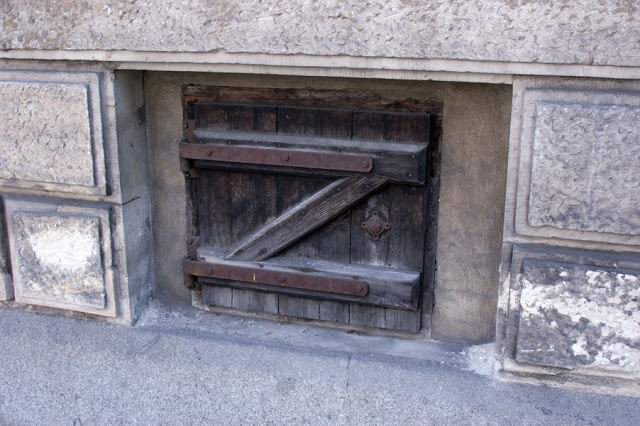 Here is an example of the Dessauer insignia sculpted right into the building. You can see it on each wall: 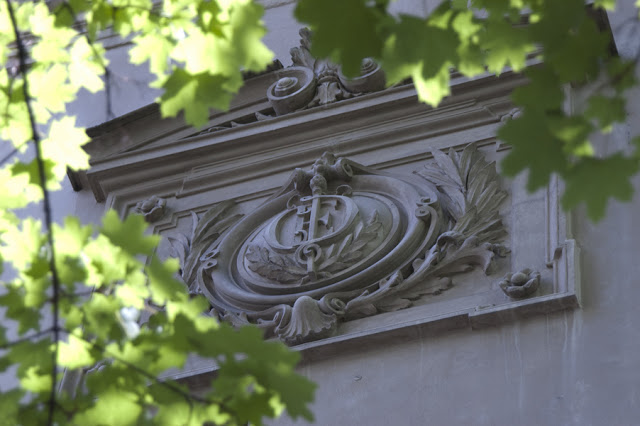 I found lots of references to when this house was built and for whom, but not much about the intriguing notation on the sign here: 1945 Amerika-Haus. 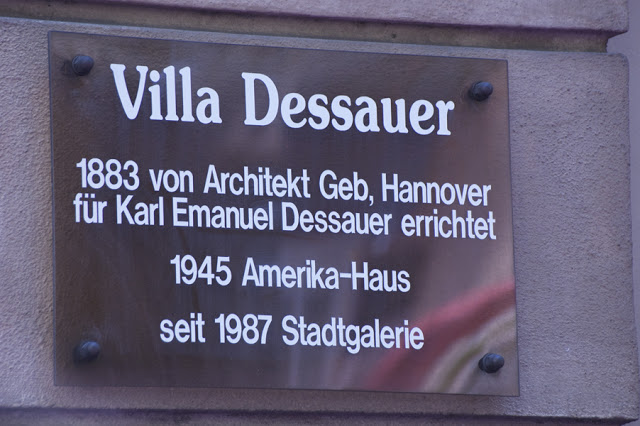 Finally, I found some history written in German and ran it through Google translator. Here is what (I think) it said:

Dessauer had no children, so he eventually sold the house to someone else in 1907 just before he died. That owner later sold it to someone named Neuberg who ended up subdividing the house into separate apartments and renting them out. After that the house passed to someone named Pretzfelder.

The Nazis came along and confiscated the house in 1942 and used it for a tax office and other governmental bureaus. The Americans took possession in 1945 at the end of WWII, but I couldn’t find anything about what they used it for. Maybe administrative offices as well.

Eventually the villa was returned to its last owner, Pretzfelder, who had fled to England before the war. In 1954, he sold it to the city of Bamberg, who owns it today. The city used the villa for offices and storage space until 1987 when it converted the house into a venue for for special art exhibits and municipal events.

I was surprised to be told that I could freely take pictures of the exhibit! This is highly unusual, but, on the other hand, the lighting was terrible for photographs, so I have but a few. Here’s an example of the ornate architecture inside the house: 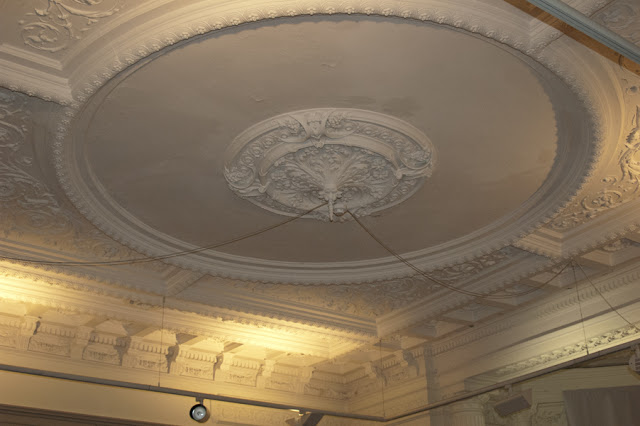 At the time the mansion was built, it had the most modern conveniences available. I read it had a glass ceiling in the atrium that has since been removed. However, the original etched glass in the stairwell it still intact: 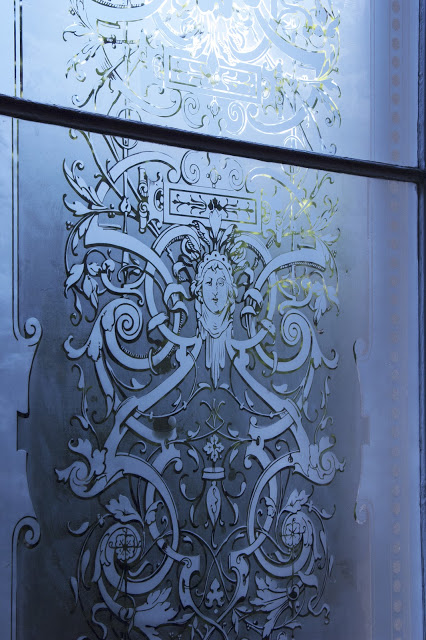 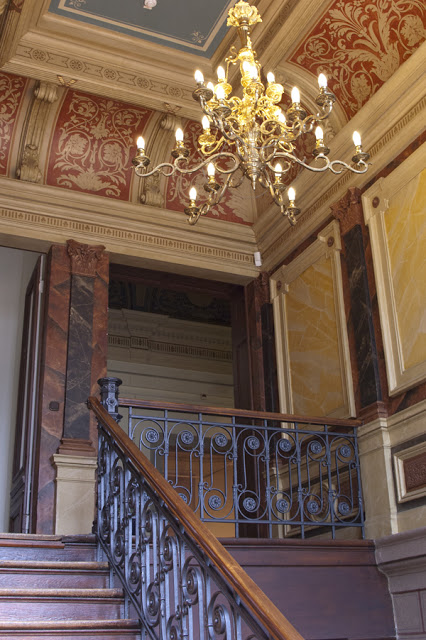 It’s a marvel that this beautiful house still stands in all its magnificence and is used for noble purposes. I would have been happy to pay the seven Euros just to see the house. However, there was an art exhibit to see, so I got down to business.

I was astounded to find what a wide array of famous artists were collected here! Not only Picasso, but Dali, Hundertwasser, Kandinsky, Christo, Chagall, Warhol and many, many others, apparently all from a private collection of one Richard H. Mayer who lives here in Bamberg. He’s an art broker and also has an antique and framing shop in the city center. I love looking through the old maps on sale.

The displays at Dessauer were impressive for the most part. There were so many pieces that the curators had a hard time fitting all of them onto the walls in some places. This resulted in some of them not being properly lit, but I’d rather see one in shadows than not at all. Here are the Picasso and Dali displays: 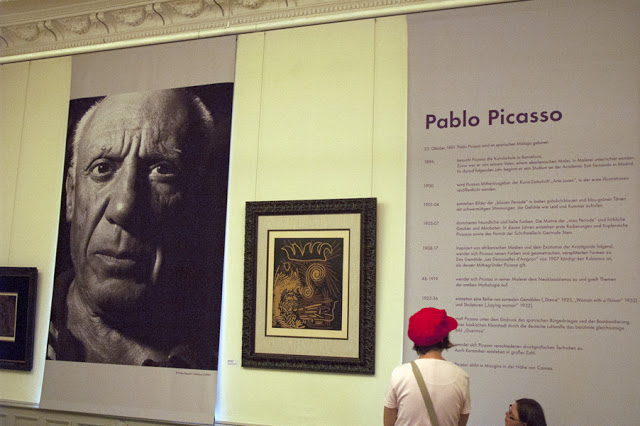 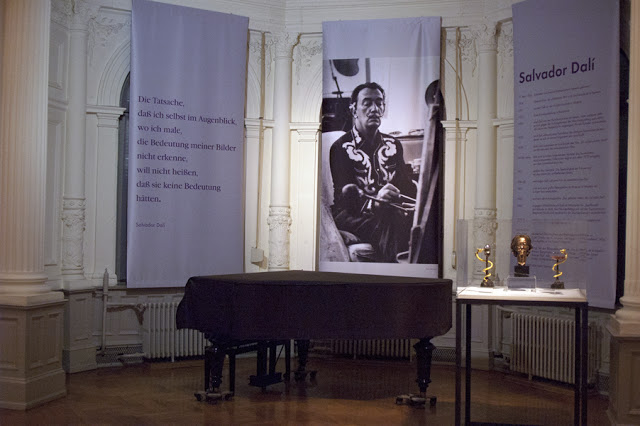 As I said, there were many and beautiful pieces. One of the Picasso’s that I particularly enjoyed were portraits of his son Claude and daughter Paloma when they were children. The portraits were made entirely from his fingerprints.

I enjoyed meeting Georges Mathieu for the first time with his work La Temeraire. In addition there was a whole room of Chagall, one of my favorites with his blue airiness. I’d heard of the famous German artist Hundertwasser – I think I remembered his name because it literally means “hundred water.” I hadn’t seen any of his work until that day, but now I know him, too.

Surrealism was well represented. In addition to Dali, there was Hans Bellmer, whose marionette drawings were interesting, if not disturbing. There were selections of Pop Art, including a Warhol or two. There were a couple of pieces from Richard Lindner, who I’d recently met at the Bayreuth art museum.

The last of the 12 art rooms was devoted to Joseph Beuys (1921 – 1986), a famous German artist. I’d never heard of him, but most Germans I talked to about him knew his name and had a positive reaction. I have to say his works were not my favorite style, but my German teacher explained that he was very high-profile and outspoken about political issues. And he was always photographed wearing his hat!

If you want to see any of the images I just mentioned, just plug their names into Google Images and enjoy! There are too many for me to include all the links.

Fortunately the exhibit had an excellent catalog available, so I bought that and am still enjoying it.

Frank had met me at the gallery and we went afterward to meet Anette and Michael, our friends from Kronach, for dinner at a great Indian restaurant, Swarg, which means, despite the way it sounds, “paradise” in the language of India. The meal was happy: 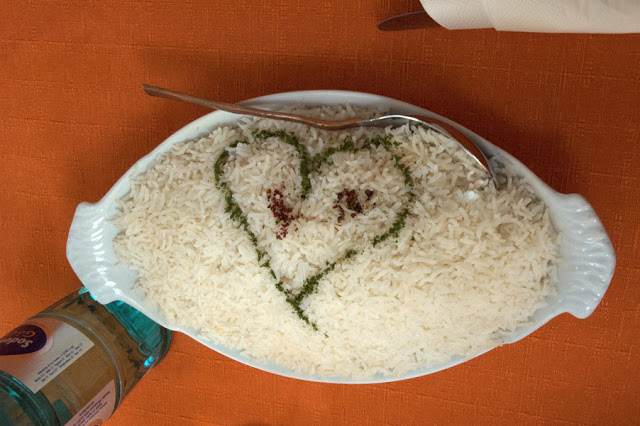 Frank was happy to see all the food: 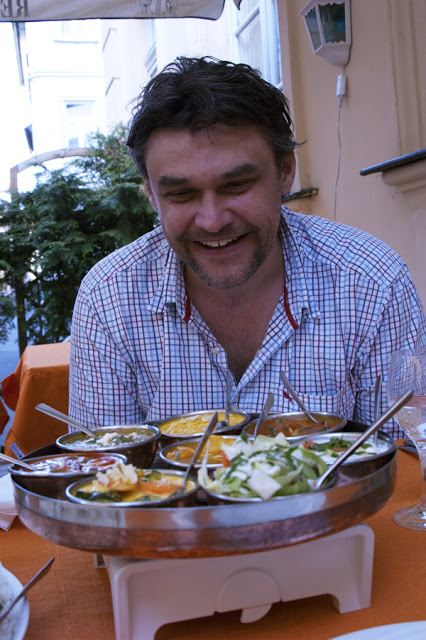 We had a great dinner outside on the patio. It was there that Anette and Michael invited me to Kronach “sometime in the near future.” And then I lucked into the Crana Historica trip the very next weekend.

Here’s a blurry shot of us that the waiter took for me. 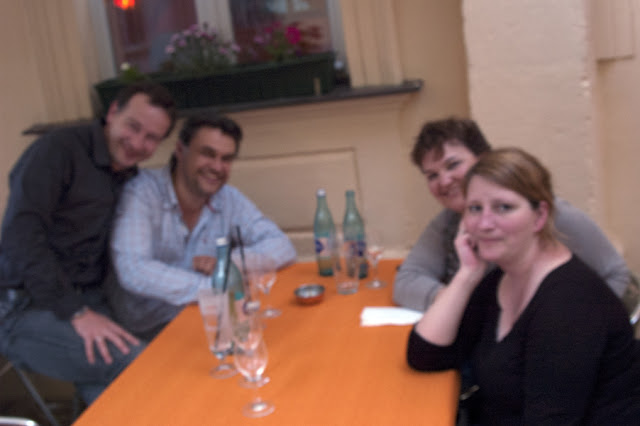 I hope you enjoyed my art-filled outing. I wish all of you could have seen this glorious display. Look forward to more art excursions in the future! 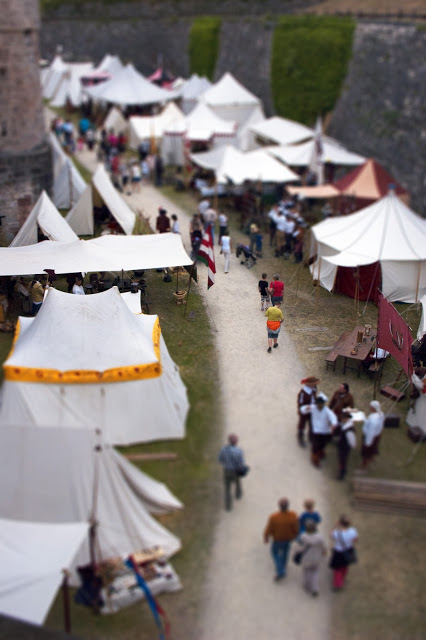