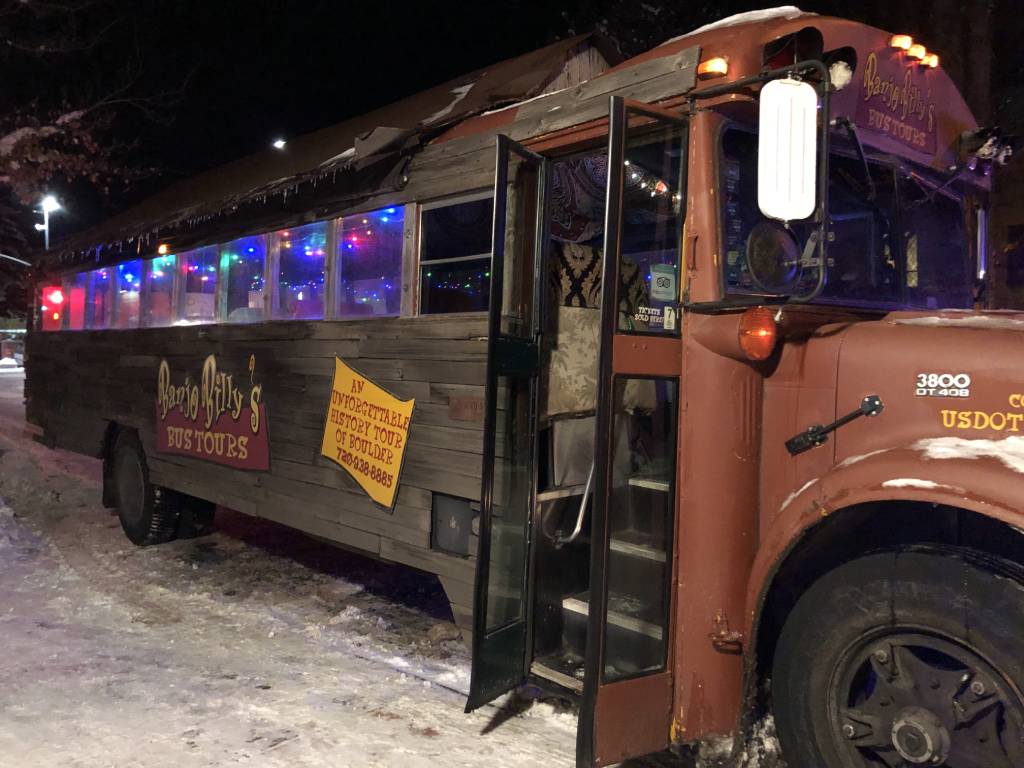 About two years ago, I made an excursion to nearby Boulder, Colorado, to see the house and other locations that Robin Williams frequented when they were shooting the Mork and Mindy show in the 70s. You can see that post here.

While I was traipsing around town, I saw this bus for the first time: 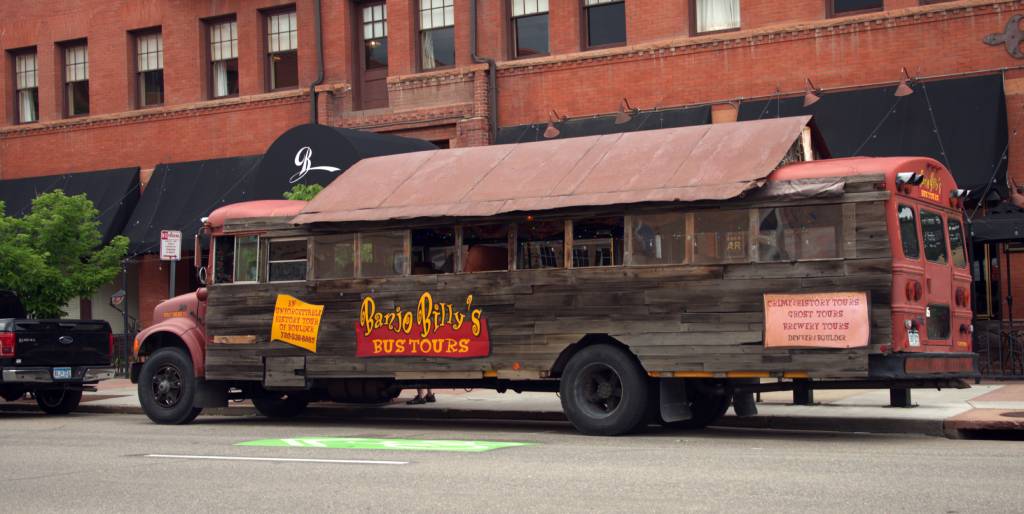 Though I didn’t know it at the time, but it’s the lone vehicle of the Banjo Billy Bus Tour company. Shortly thereafter, my hairdresser mentioned the bus tour to me, so I knew it was fate that I would end up on this bus one day.

So, when my bestie Cheryl came for a visit at the end of October last year, we signed up for the haunted Boulder tour that Banjo Billy offers. Here’s the bus waiting for us on the COLDEST night of the year!!!

This is a real hippie bus. You can’t see it here, but there is a rubber chicken on the front. The website has a great story about the bus and company history. It’s a 1994 school bus with fencing slats on the side and a pitched tin roof. The original plan was to put logs on the outside to make it look like a log cabin, but they were too heavy. It ended up looking more like a hillbilly shack than a log cabin, and that’s how the name came to be. Banjo Billy opened in 2005.

Inside looks like a throwback 70s place where you’d go to smoke weed with your friends. Or so I’ve been told. The seats have been replaced by easy chairs and sofas: 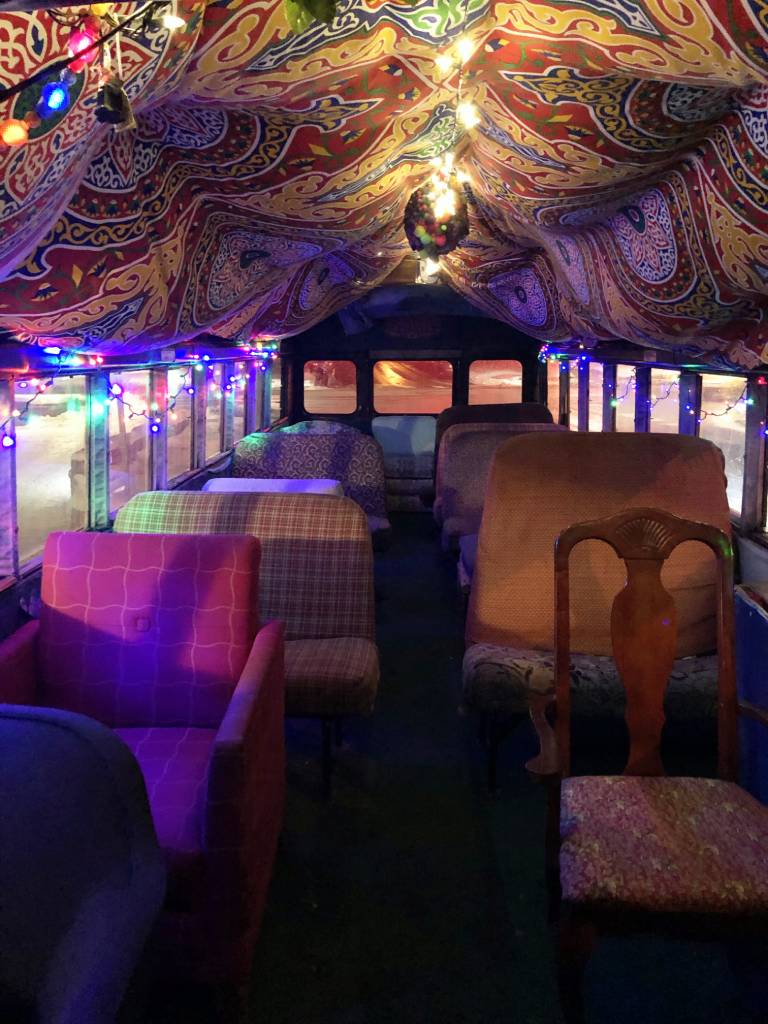 The ceiling has a disco ball covered in these tribbles: 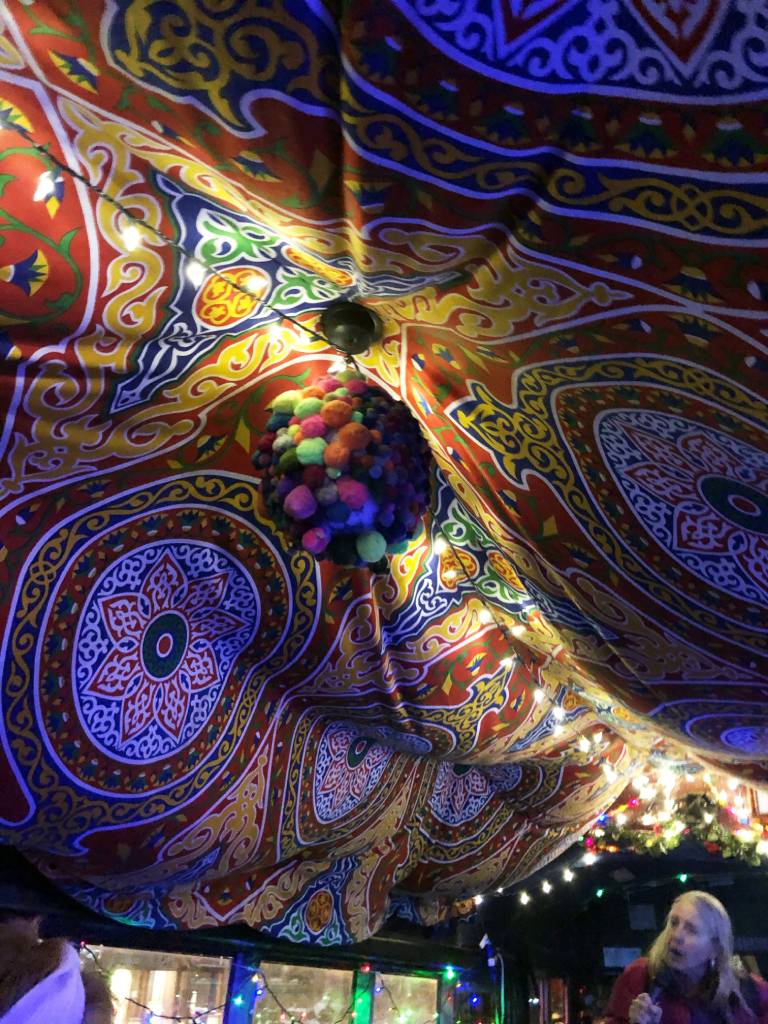 There is even a saddle! 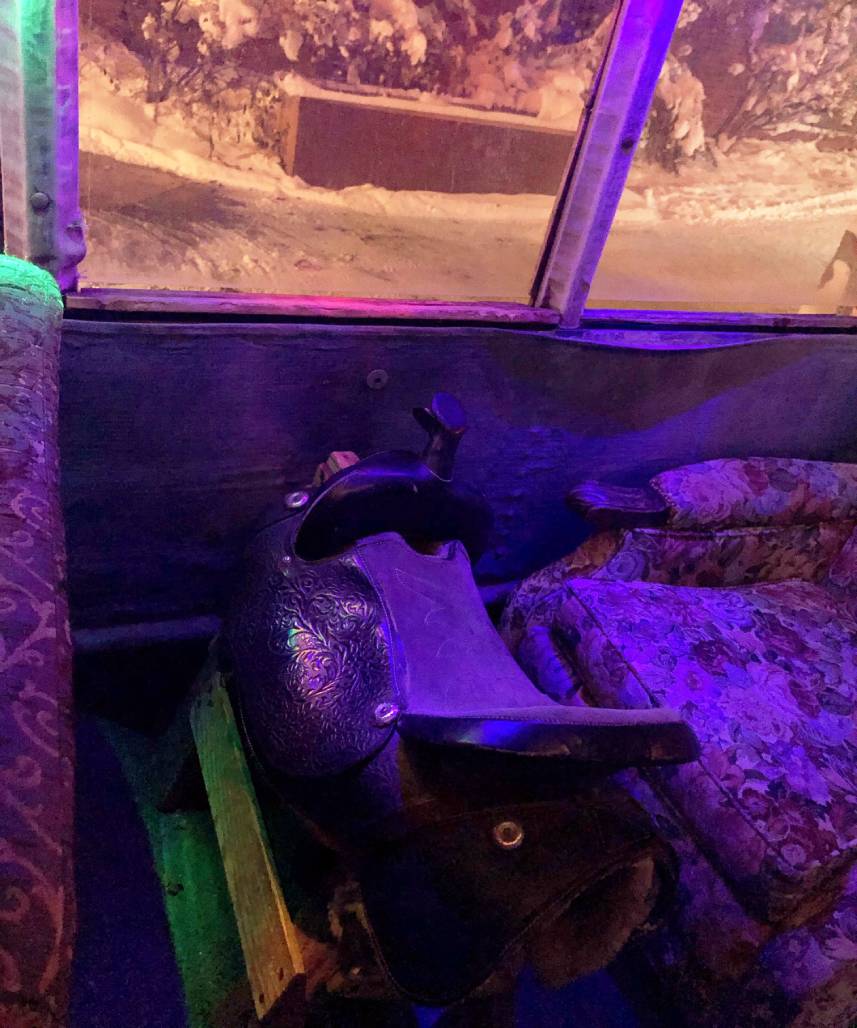 Because it was Halloween and we were on the ghost tour, the tour consisted of being driven around Boulder and stopping in front of supposedly haunted buildings. Our tour guide, whose name I’ve forgotten (so sorry!), was very animated and a great story-teller. 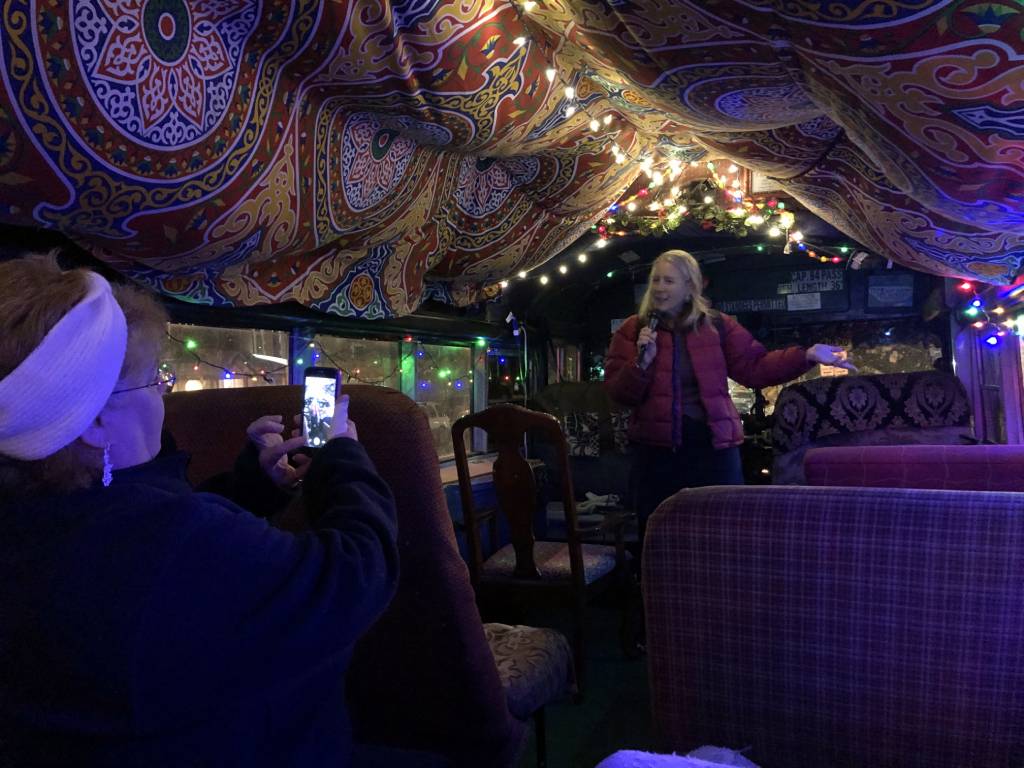 She was prone to dancing during the drives between houses when they were playing songs like “Thriller”: 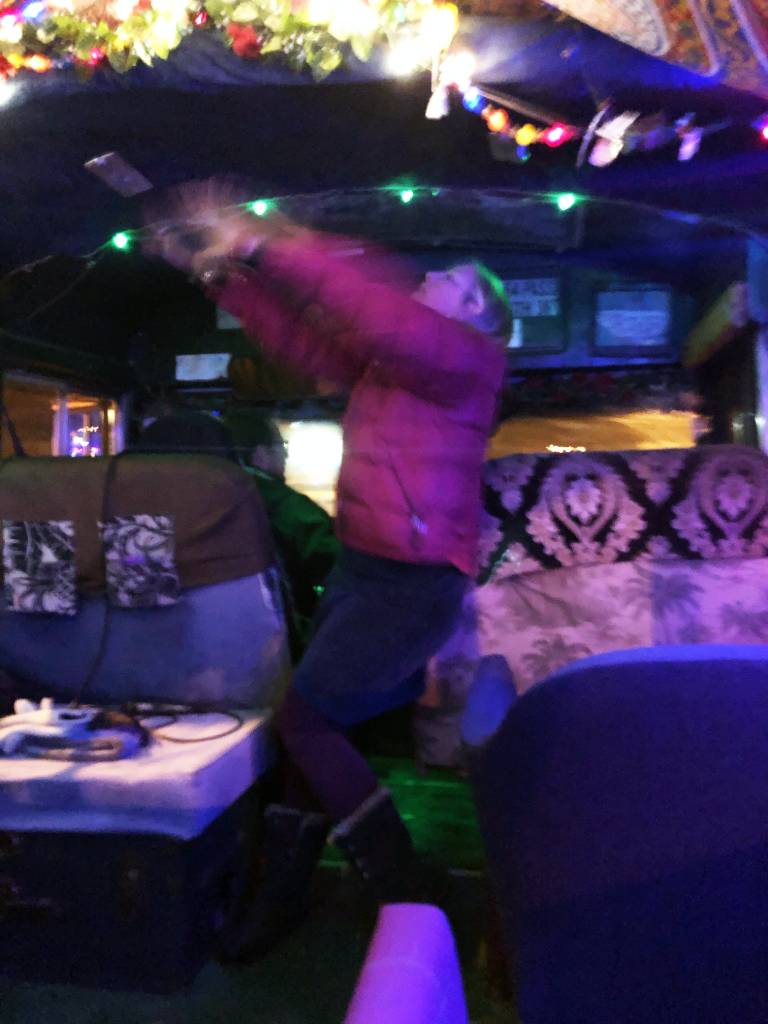 Banjo Billy also conducts historical tours of Boulder and Denver. Their most popular, I would imagine, are the tours of local breweries. Wouldn’t it be great to gather a group of friends to visit local breweries and ride around town in this monstrosity of a bus?

I asked the guide if they provide stories of the locations during the brewery tours. She replied, “Nah, we just drink.” Uh-huh.

Though I don’t remember specifics of the stories that were told, here’s a picture of one of the haunted houses, the Montgomery House: 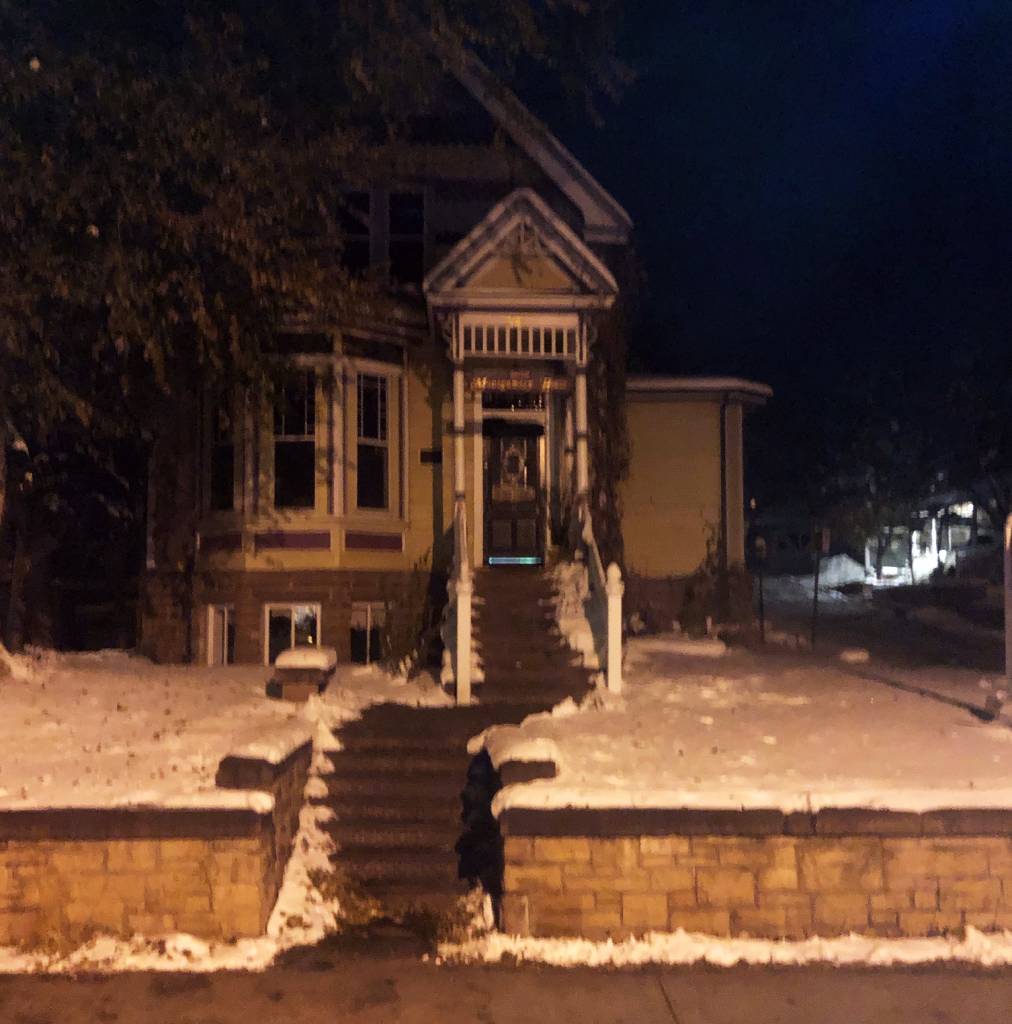 However, the first stop on the tour was the historic Hotel Boulderado. Cheryl and I actually waited there in the lobby for the tour to start. It’s over 100 years old and is awesome! They also had wonderful Halloween decorations that night: 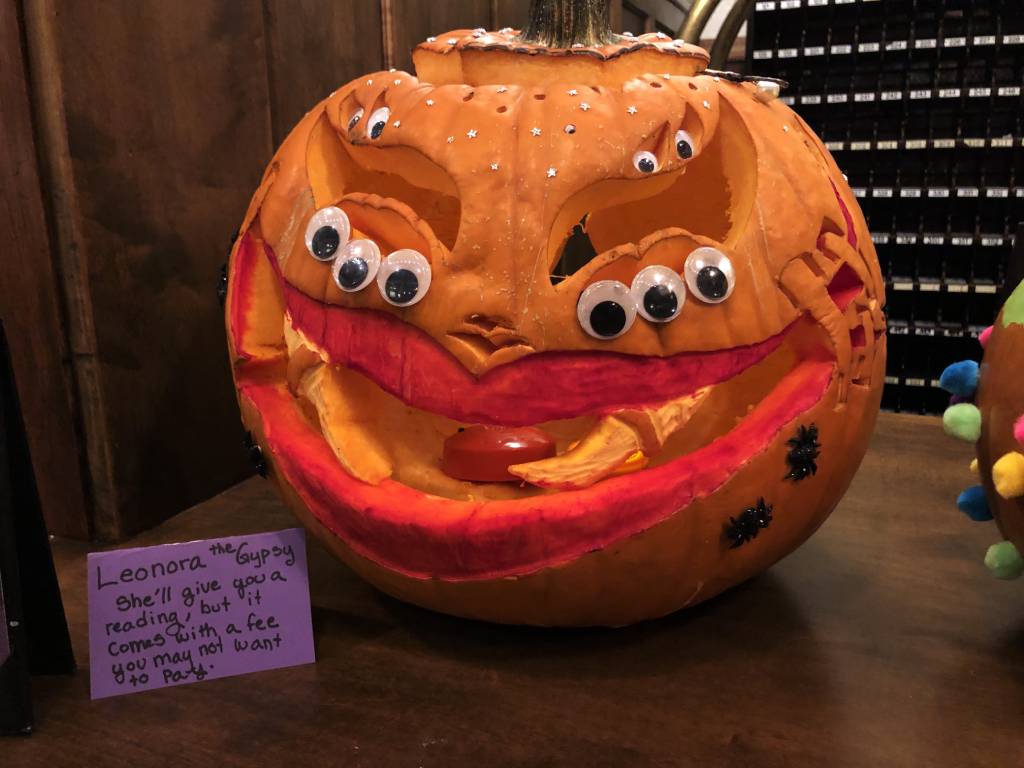 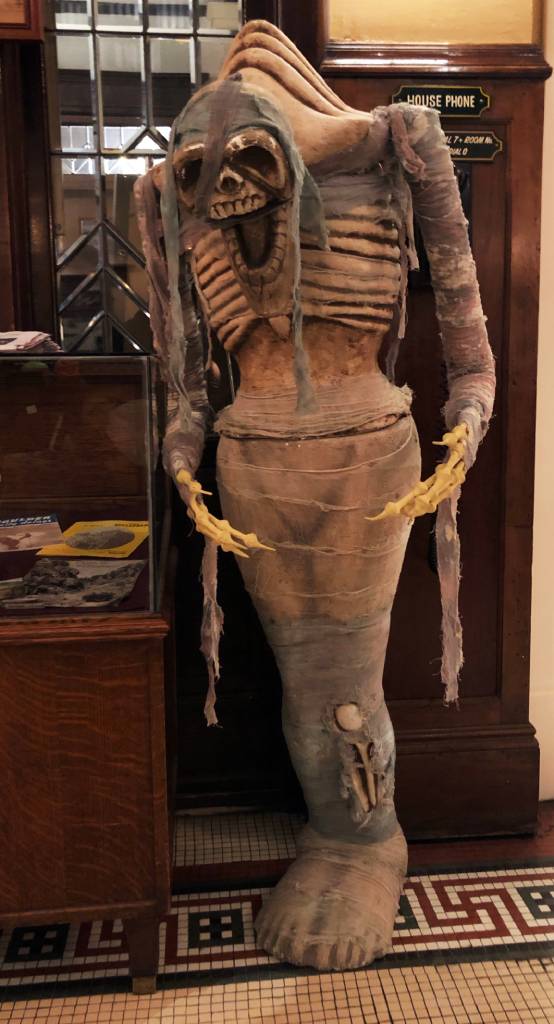 We learned later that sometimes a ghost accompanies guests on the elevator. Glad we stayed in the lobby!

I think we stopped about a dozen times in Boulder that night, with spooky stories at each stop. Only two other people were on the tour with us, so there was lots of room and lots of time for questions. I loved it! It wasn’t THAT scary, but I was a little nervous once or twice, especially when we stopped under a haunted tree where someone had been hanged. I’m still hoping the scratching we heard was just the wind in the tree above us!

The tours are, I think, $24 per person, a little less for kids and seniors. The tour was about an hour and a half.  It’s well worth the price. They’ve been doing something right to be in business for over 15 years. Come visit me, and I’ll book us whichever tour you want! 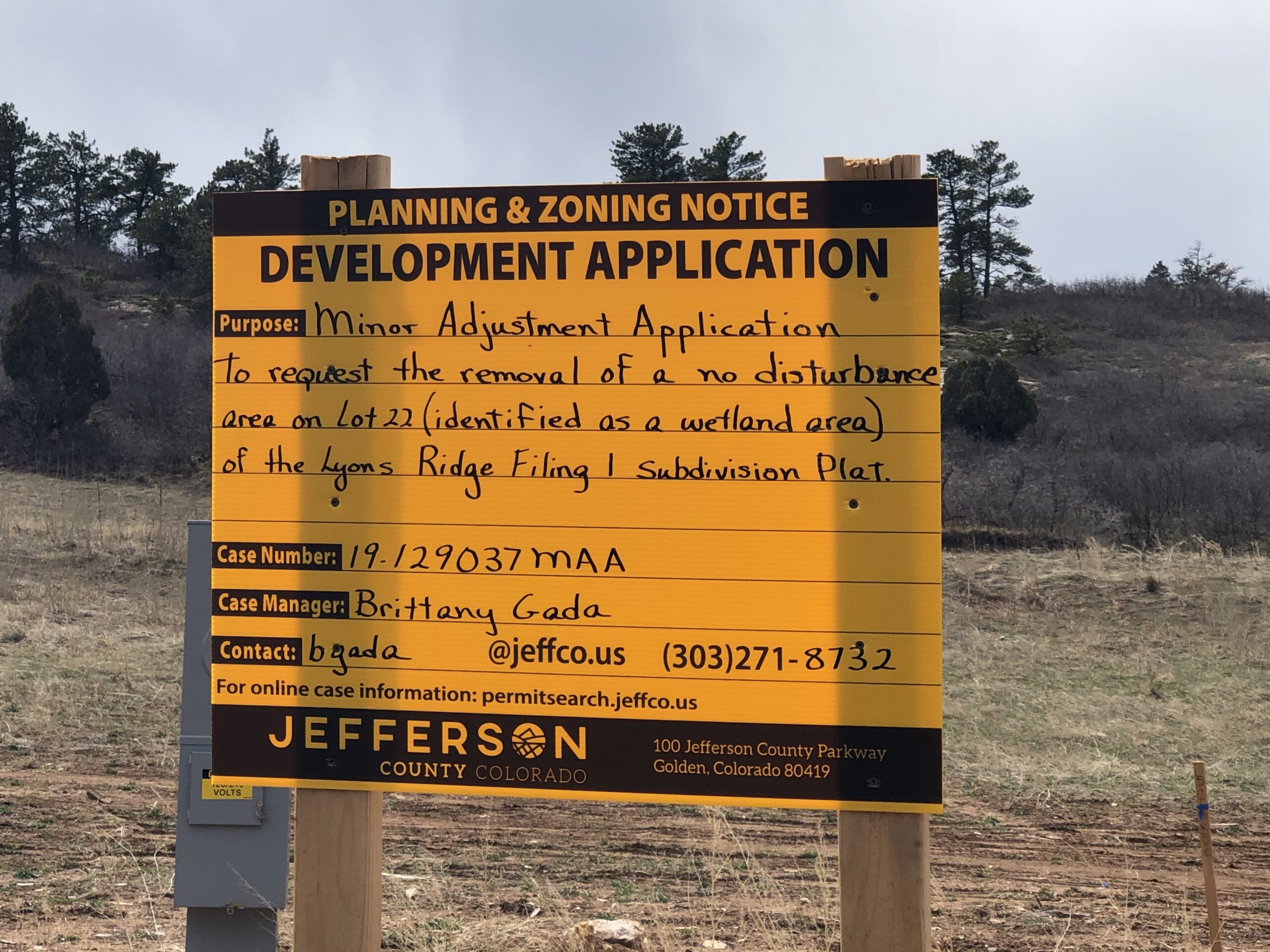