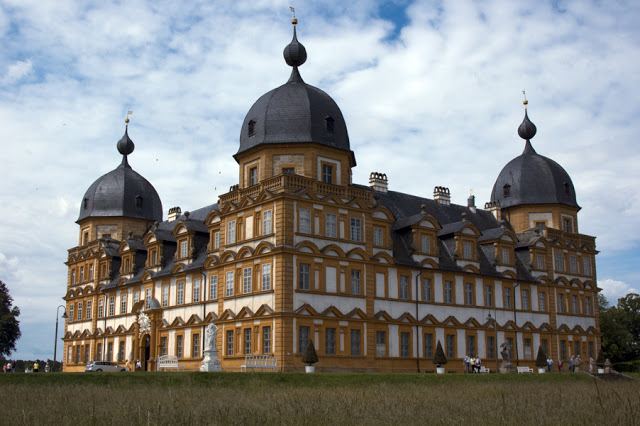 Buy my books! Collect them all!

I have a friend named Gabrielle. I met her because I’m in a tandem program through my school. Gabi is German studying English; I speak English studying German. So we get together every week or so at a café and, theoretically, speak English half the time and German the other half. Theoretically.

Gabi asked me last week if I’d like to have Sunday breakfast at Schloss Seehof, a castle near here. I jumped at the chance!

So, on Sunday morning, Gabi picked me up in her cute little 18-year-old Peugeot and we tooled to the castle. Side note: the car’s sunroof operated by a hand crank on the ceiling! 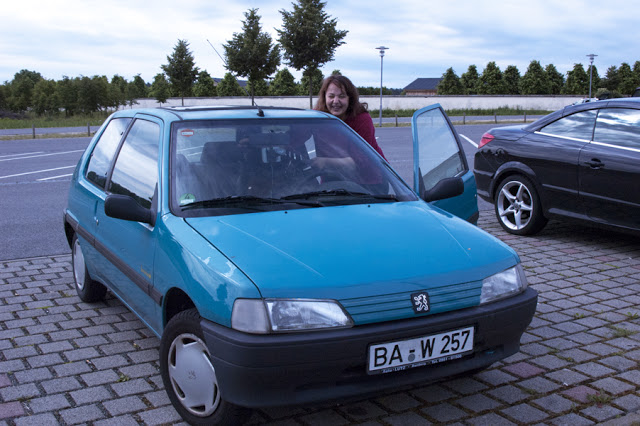 Schloss Seehof is a rococo castle near Bamberg in an outlying village called Memmelsdorf. It was built in 1686 as a summer residence for the Prince-Bishop rulers who lived in Bamberg. It’s a pretty small castle as castles go, but still very impressive.

Gabi had made reservations at the café, which is operated out of part of the line of outbuildings of the castle. This line of buildings was the former glassed-in greenhouse, or Orangerie, where they used to grow orange trees and where weddings and such are held today. The line of buildings looks like a castle wall and you enter the grounds through a gate in the middle.

Here’s a view of the castle from outside this gate: 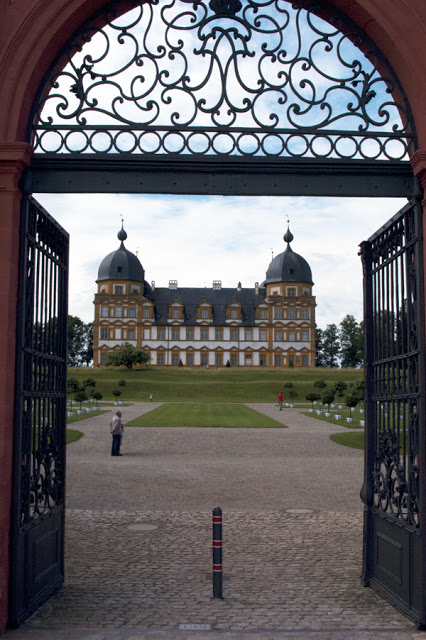 Here’s a closer view of the castle proper:

Here’s a view inside the gate looking out: 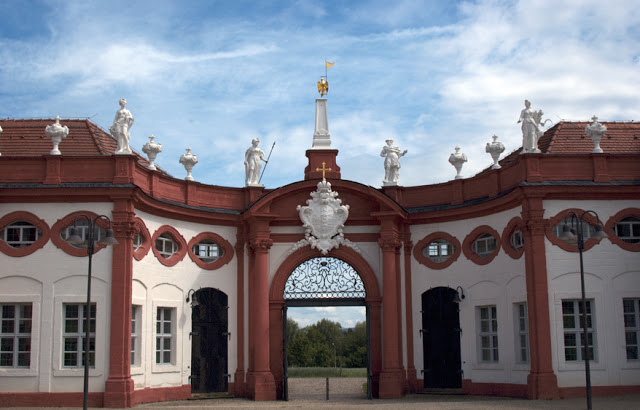 The café is to the right of this picture. As you can see, it was a beautiful day, about 72 degrees, and sunny. We sat outdoors with a view of the castle gardens.

The castle and grounds had fallen into disrepair after many years of disuse, and the Bavarian state government began renovating it in the 1970s. I had visited this castle six or eight years ago, and I could see improvements, such as the café itself, which didn’t even exist back then.

For breakfast, I chose a typical German, meat-centric continental breakfast called “Balthasar Neumann.” It was accompanied by delicious coffee served in a beautiful Rosenthal cup and saucer. 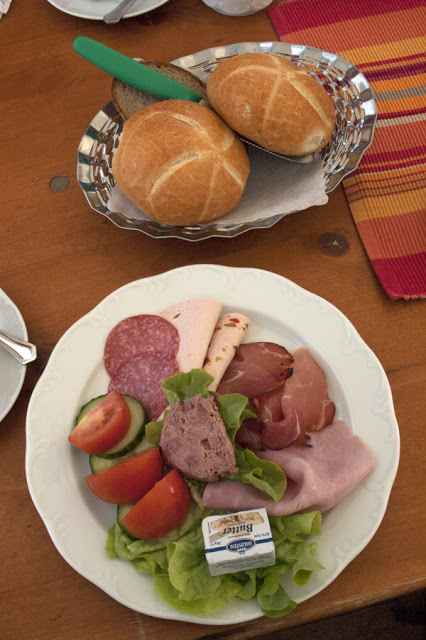 A quick internet search on the name told me that Balthasar Neumann was a German architect (1687–1753) responsible for, among others, the Baroque Residenz in Würzburg and the church of Vierzehnheiligen which I’ve visited – I wrote a travel journal about it back in 2008, before I started illustrating my journals with pictures. I wish you could see photos of it. It’s quite wonderful! Not sure what Neumann has to do with Seehof, but maybe he was involved.

After breakfast, Gabi and I toured the grounds. First off, we stepped into another section of the Orangerie devoted to statues made by Ferdinand Tietz. Tietz, sometimes spelled Dietz, was the sculptor commissioned with the castle decorations, including the elaborate fountain behind the castle.

Most of the statuary had been damaged over the ages, and the actual original fragments were in this room. Copies have been made and restored to the original positions on the walls, around the fountain and in the castle. The pieces all show a huge amount of physical power: 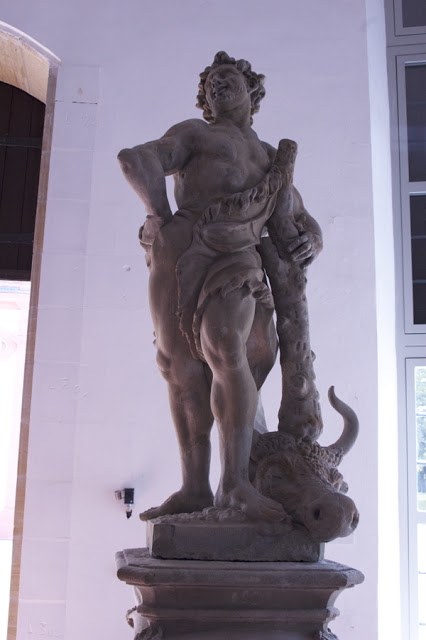 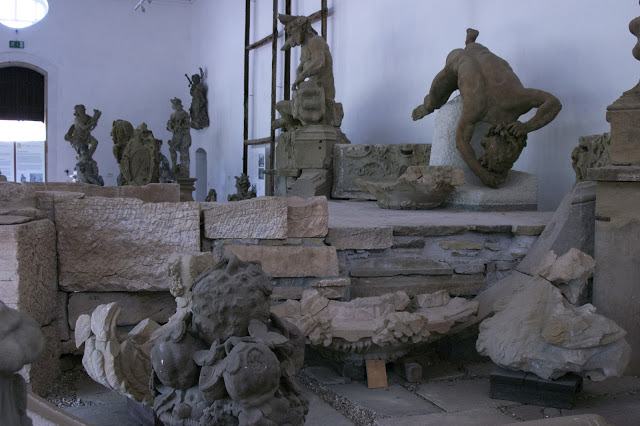 Gabi and I signed up for the interior tour of the castle, which was in German, but I was able to follow a lot of it. There are nine staterooms and a huge ballroom called the White Hall. The first thing I noticed was the chandelier: 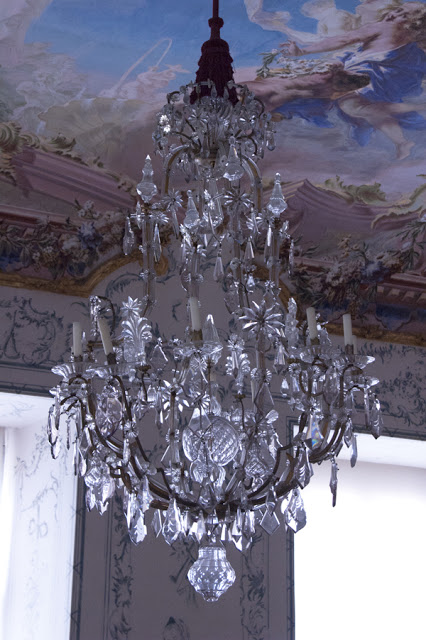 But the most beautiful feature of the room is the painted ceiling by Italian painter Guiseppe Appiani. Appiani also painted the Vierzehnheiligen basilica and several other well known structures in the area. 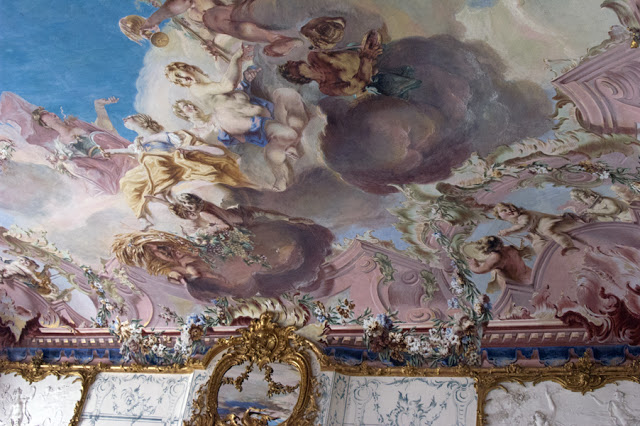 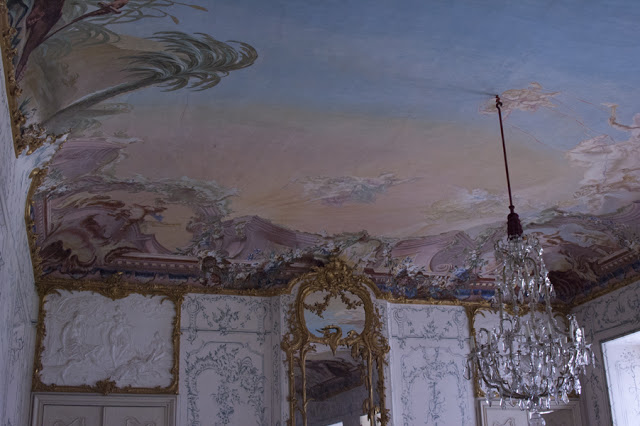 Then there were the requisite sitting rooms, drawing rooms and bedrooms, all connected through doorways along one side of the building, similar to Versailles. The furniture was very sparse and had been sold over the years and lost in the wars. Most of the furnishings were copies done in the style of the period from originals they have been able to locate. The state conservation agency has its offices and workshops in the castle itself.

This is an example of the restored gilt frame on the paintings above each door. Not all of the frames had been restored, but this one was especially nice: 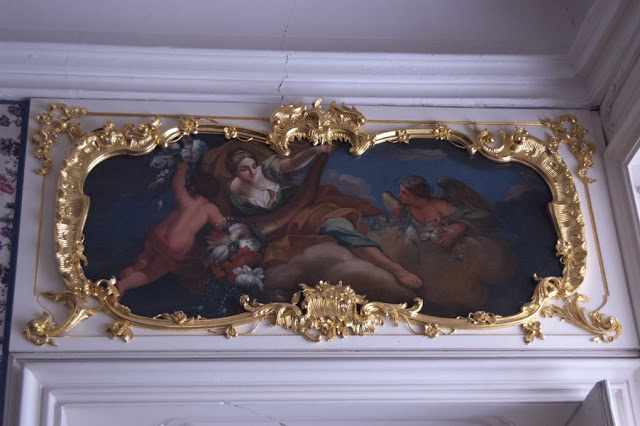 The wallpaper was a copy, too, woven out of cotton. However, one valance over a bed had an original piece of this fabric. You can see the aging that has occurred against the look of the copied fabric in this photo. The aged fabric is over 250 years old. I got the impression it would crumble if you touched it. 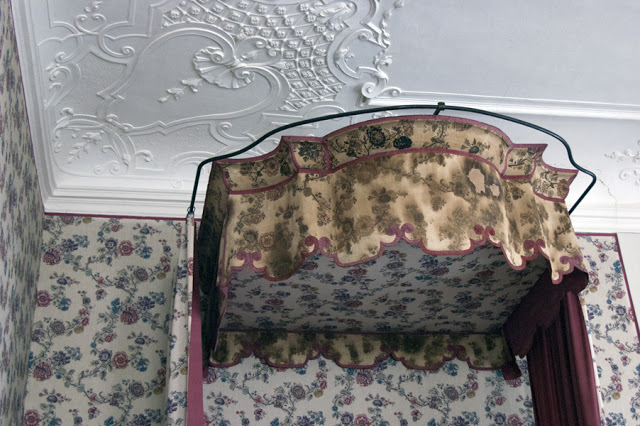 I liked the 3D effect of the extremely squeaky parquet floor in the green room: 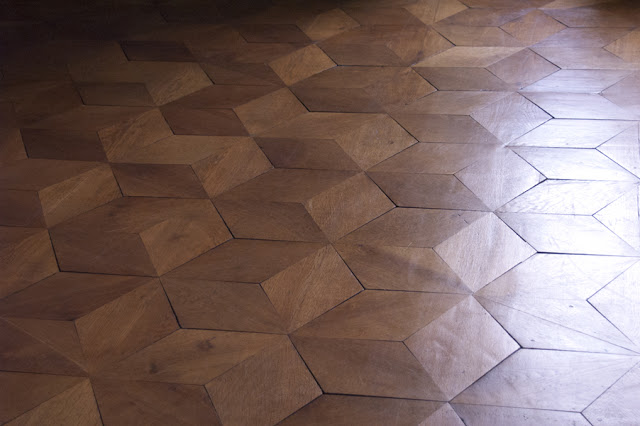 This green room was on the corner of the castle, very similar, again, to Versailles. This portrait on the wall, if I understood the guide correctly, includes a likeness of Marie Antoinette as a child (third from the right): 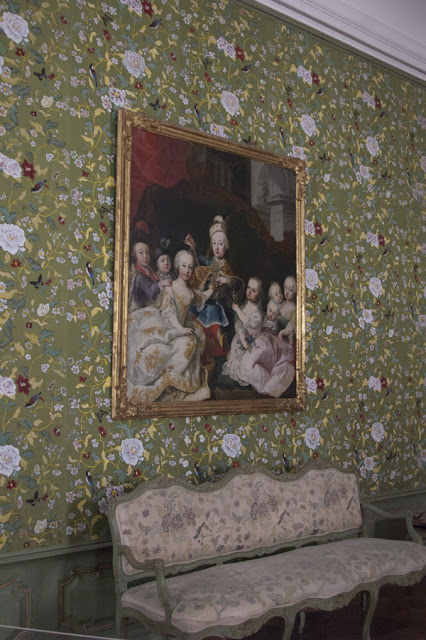 Here is our tour guide next to a gorgeous wooden secretary: 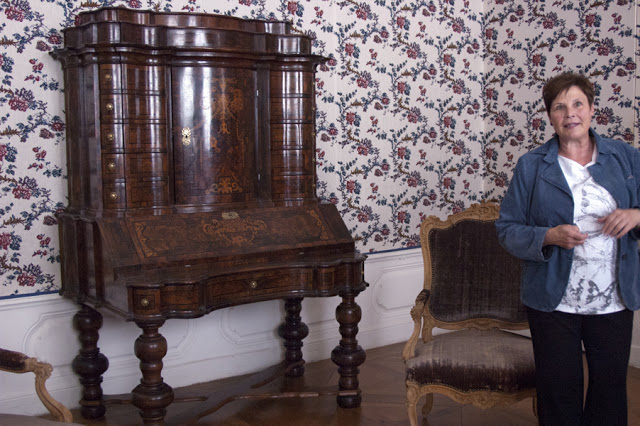 I loved the rich, green fabric of this bed. This was the master bedroom – you can see I couldn’t get the entire structure in one shot: 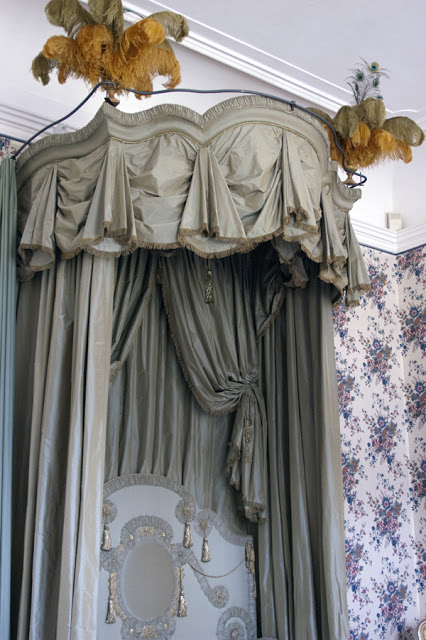 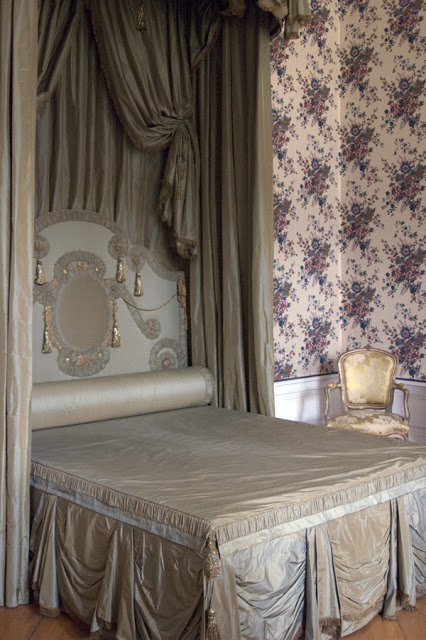 Our guide pointed out that the beds were very short. Lots of people think that it’s because people were shorter back then. Not true. It’s because it was thought that, if you slept lying down, you would die in your sleep. So people slept sitting up. Hence the cylindrical pillows (for the back) and short beds. I’d heard this before, but it was new information for Gabi.

One of the best-known features of the castle is the Wasserspiel, or “Water Show.” Every hour water flows from the otherwise quiet, restored copy of the fountain by Tietz between the castle and the nearby lake.

When I saw this Water Show several years ago, my husband and I had been invited to the castle by German friends. They were so excited that we see the Water Show and made sure we arrived in plenty of time to get a good spot to watch. I remember it was 4:00 p.m. because it was a warm day and the sun was beating down on our heads. But we had to watch because it was so special! I was all primed for a Disney-esque or Bellagio-type experience. However, the Water Show consists of water squirting out of various orifices of the statues in a steady stream for 8 minutes. That’s all. It was rather anti-climactic.

So, when people left our tour to see the Water Show, I was snickering behind my hand. The tour guide raised a blind in the royal bedroom so we could see the special show: 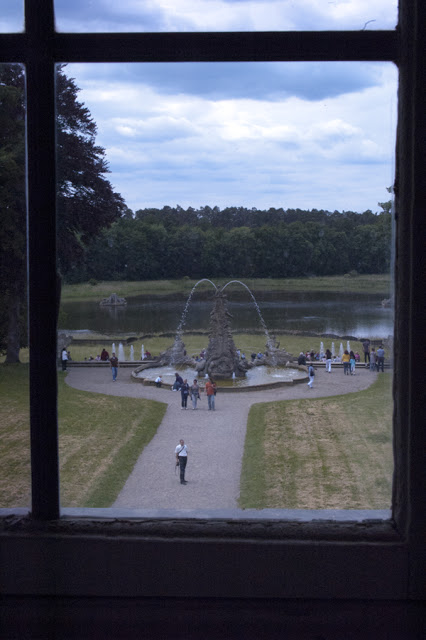 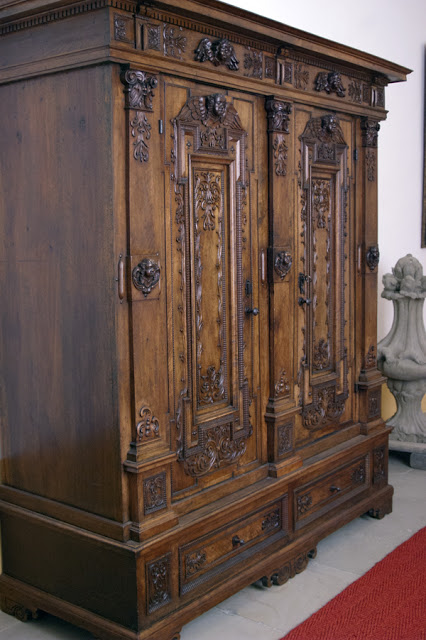 After the tour, Gabi and I wandered down to the fountain. Here are a couple of details from it – I do love the ornamentation: 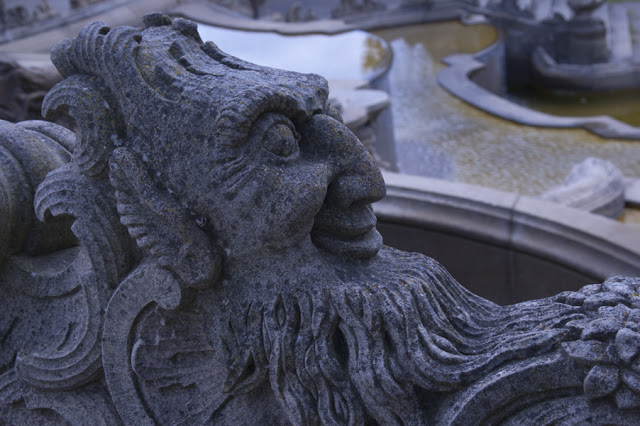 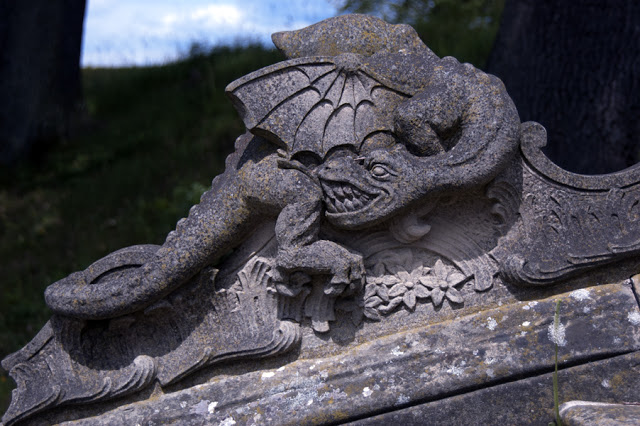 Behind the castle beyond the fountain is a lake, or See in German. The castle takes its name from this lake: Seehof means, literally, Lake Castle. Here’s a peaceful swan enjoying the afternoon beyond the castle fence. 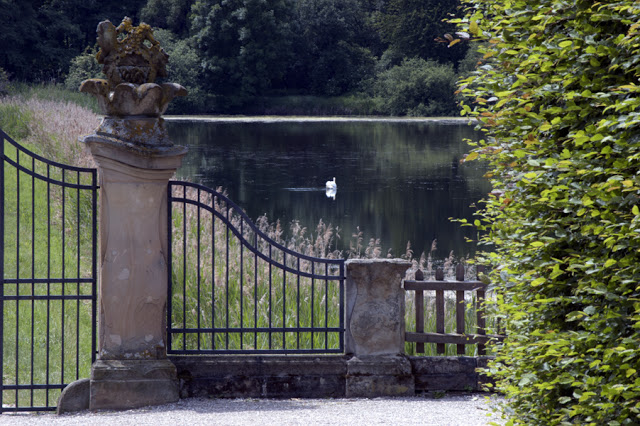 I was excited to see that they have made progress on the labyrinth; the shrubbery has grown to about 10 or 15 feet high. They hadn’t yet cleared the labyrinth area when I was there last. It was just a big mass of weeds. Although the labyrinth isn’t really a maze, just pathways between the tall hedges, it affords the visitors a cool walk after the tour.

So, that was my wonderful, relaxing Sunday brunch at the castle! I hope you enjoyed it, too. Stay tuned for more adventures next week! 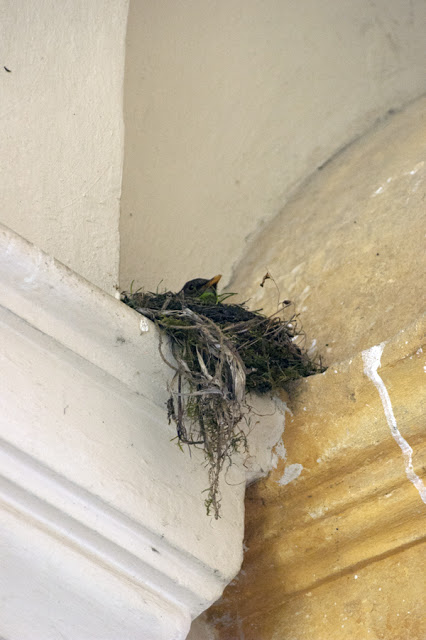