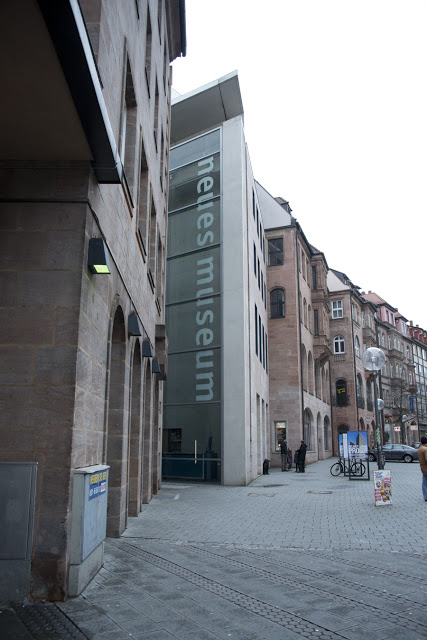 Shameless plug for my books –  Photos for No Apparent Reason (PFNAR),

compilations of all the PFNARs for an entire year, along with dates, places and backstories!

Click below to buy the compilation of all the PFNARs for 2017:

Coming soon: PFNAR compilation of all those weird photos from 2016!

Yesterday I made the 30-minute train trip to Nuremberg. You may remember I attempted to visit the German National Museum to see the Albrecht Durer exhibit last year. While I didn’t get to see that particular exhibit, I knew that Nuremberg has six or seven good museums and that I would get to see something interesting if I went there.

Plus it was my first opportunity to venture out for a photo excursion with my new Nikon D800 nestled snugly in my new National Geographic camera bag. Love that!
I checked the web and there was not anything on offer at any of the museums that I had a burning desire to see. So I chose the museum closest to the train station, which was the Neueus Museum, which literally translates as “New Museum.”
From the train platforms in the train station, you can walk through an underground area and emerge on the other side of a busy, multi-lane thoroughfare right at one of the entrances to Nuremberg’s historic Old Town district. Though most of the underground area is dingy, depressing gray concrete and ugly fluorescent lighting, I do always enjoy seeing this mural depicting the Old Town on my way through (except for the hideous orange tile): 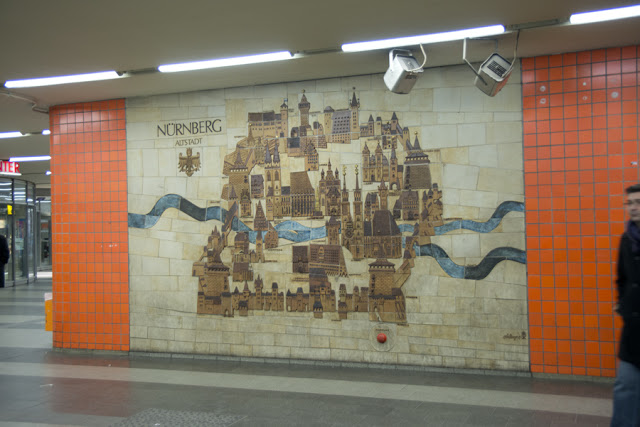 To give you an example of the creepy, stressful shops under there, here’s a shot of a wig shop named Zweit Haare, or Second Hairs. I will give them points for dressing each mannequin head in a different style with scarves, sunglasses and the like. 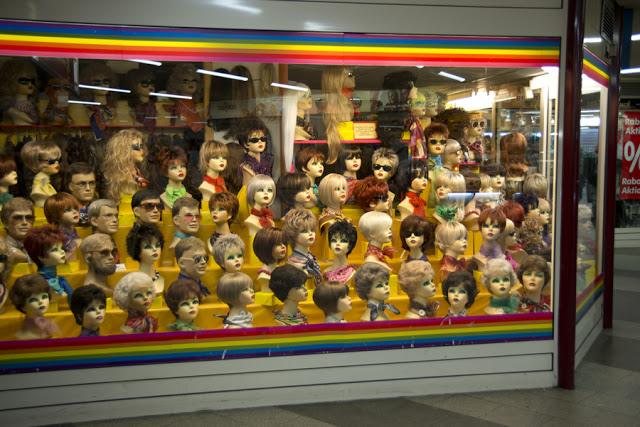 Once you emerge from the uneasy underground, the first thing you see is a giant tower at the entrance of the Old Town: 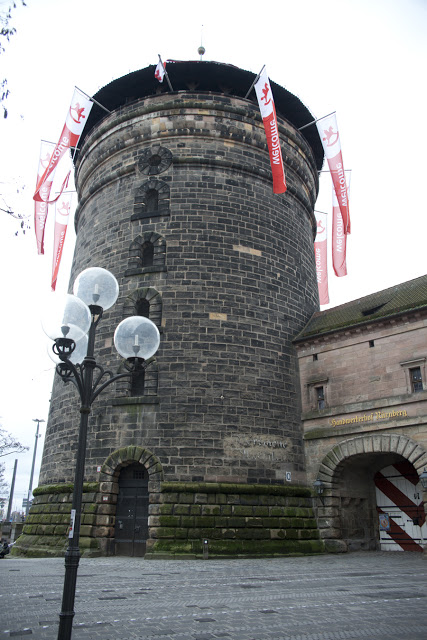 Next to that is an area where, when open, has shops done up in half-timber and traditionally Bavarian décor. Most of them are souvenir shops but they sell traditional German stuff like beer steins and so forth. Today that area was closed: 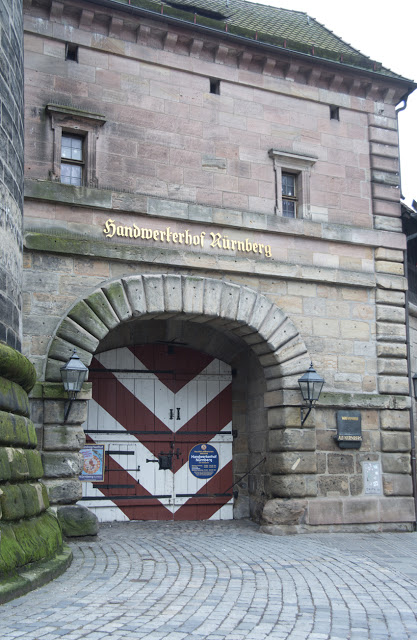 Not far from there is the Neues Museum and it is indeed Nuremberg’s newest museum. It displays modern, contemporary and mostly abstract art. You can see the corner of its glass and steel building peeking from around its stone neighbors:

If you walked up to that corner and looked down the side, you’d see this: 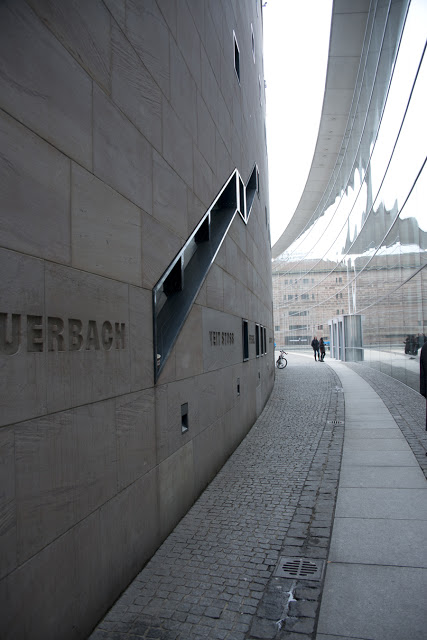 As I was hungry, I jaunted across the street to Café Literaturhaus, one of my favorite spots I’ve mentioned here before, for a salad before I went to the museum.
I spent an hour or so in the museum after lunch. I can’t say I enjoyed the art that much because abstract and contemporary art are not really my things. But I did like seeing the inside of this ultra-modern building squeezed somehow in the midst of its heavy stone neighbors. There were a lot of items from painting to photos to installations, all modern.
Although I don’t “get” modern art the way I do some historical genres, I can appreciate the skill, processes and passion of the artists to do what they do. In addition, I used the opportunity to practice just exploring the feelings the art gave me instead of spending conscious time just not liking the displays.
The temporary, main exhibit was the work of an architect named Helmut Jahn. He’s a contemporary architect from Nuremberg and spent a lot of time in Illinois. He designed many modern places, such as the United terminal at O’Hare, the trade fair tower in Frankfurt and skyscrapers in Chicago, New York, Cologne and other world capitals.
The exhibit room was two stories with two-story photos of his creations lining the walls. Tall glass display cases displayed his models and reproductions of his colorful drawings.  In the center of the large room were clear acrylic benches in a square.
What made the exhibit relatable for me was that this architect designed the Munich airport center, a place near and dear to my heart because I normally fly in and out of Europe through that airport. In addition, he designed the Kempinski airport hotel adjacent to the terminal center where I stay just before and just after my trips. So the exhibit became personal to me, which was really a nice experience.
Of course I don’t have any photos from the museum because they don’t allow such things. So I’ll have to give you some images from my time after visiting the museum.
When I exited the museum I could hear music. I followed the sound to the next street and caught the very end of a children’s Fasching parade. Fasching is Germany’s equivalent of Mardi Gras or Carnival. My first indication of something unusual happening was seeing a passing wolf: 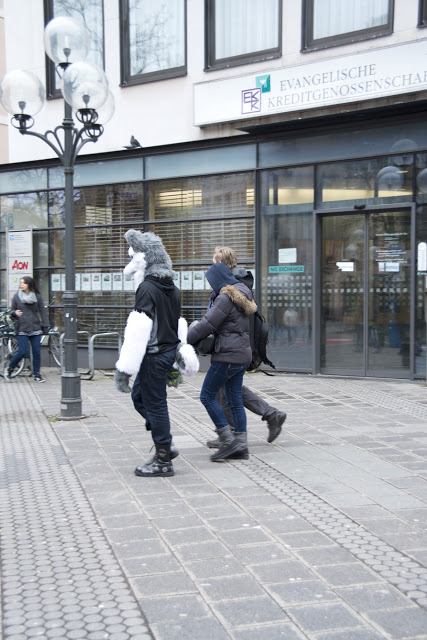 The music I heard was a samba band, similar to the ones I saw in Coburg last year. Here they are just breaking formation at the end of the parade. 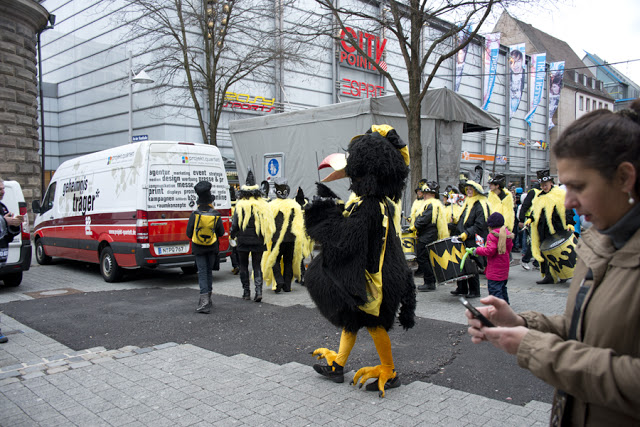 The parade consisted of lots of people dressed as famous cartoon and movie characters, including Geoffrey the Toys R Us giraffe, Star Wars characters, sports mascots and TV cartoon characters. 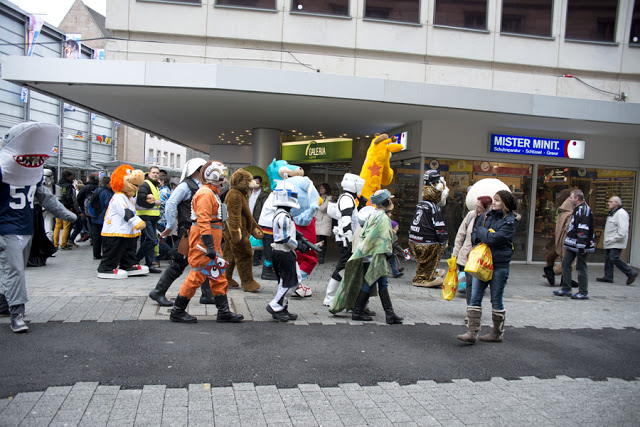 They, too, were just breaking formation from the parade, still followed adoringly by hoards of children. Here you can see them trying to diplomatically disengage from the kids and enter the warehouse in the background. Some of them were more popular than others and had a hard time of getting away: 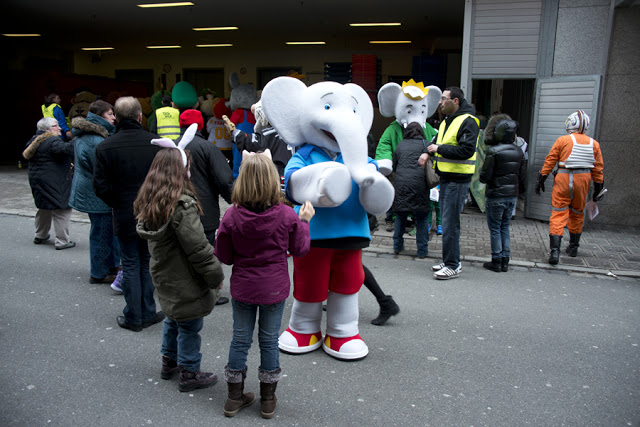 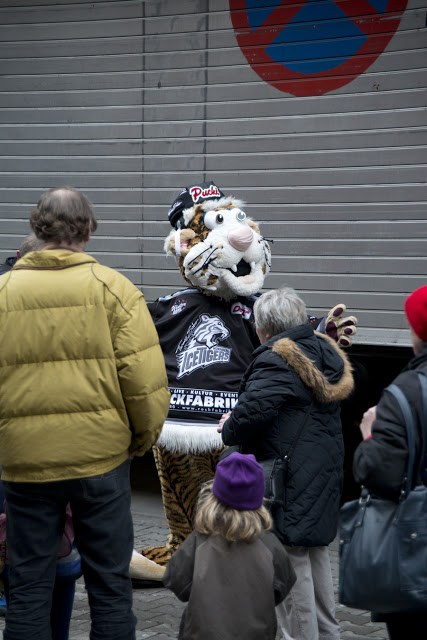 But some of them broke character for a smoke, regardless of who was watching. Here’s what has got to be my favorite shot of the day:

After that excitement I wandered the Old Town a little more and shot St. Lorenz cathedral: 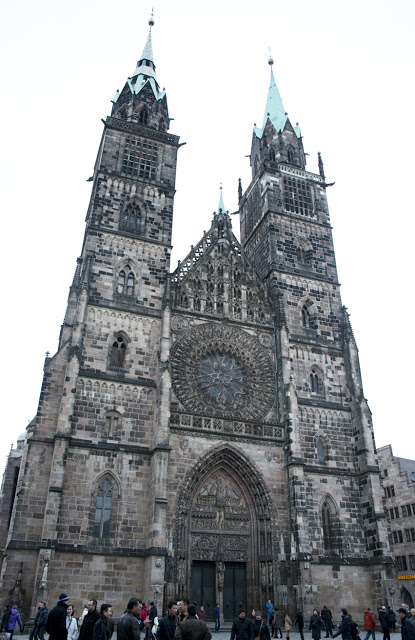 Then I returned to the Neues Museum and visited the café next door. It was an Asian-flavored bistro place called HappyHappa. They had sushi on offer, which probably accounted for the faint fish-market smell that greeted me when I first entered. But a handsome young waiter met me at my table with a bowl of green tea as a welcome: 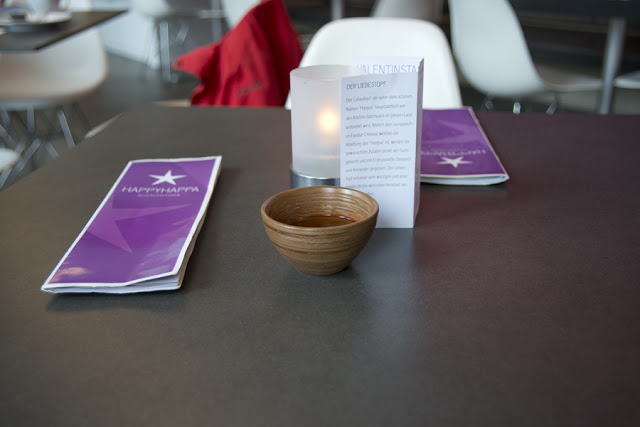 I was trying to decide between the raspberry torte or the cheesecake when he recommended the chocolate torte, so I ordered that: 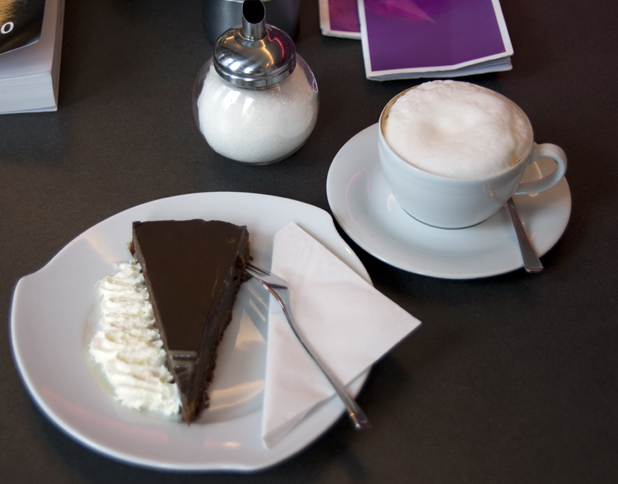 It was wonderfully creamy with raspberries and fragments of candied ginger inside. Yummy! I ate it while I studied my book about how to use my new camera. I’m still studying!
After that it was time to leave so I headed back to the train station and home. Nothing too exciting but a little more interesting than staying inside.
Here’s hoping all of you had an equally or more interesting Groundhog Day and that your year is going well. Cheers!
Photo for No Apparent Reason: 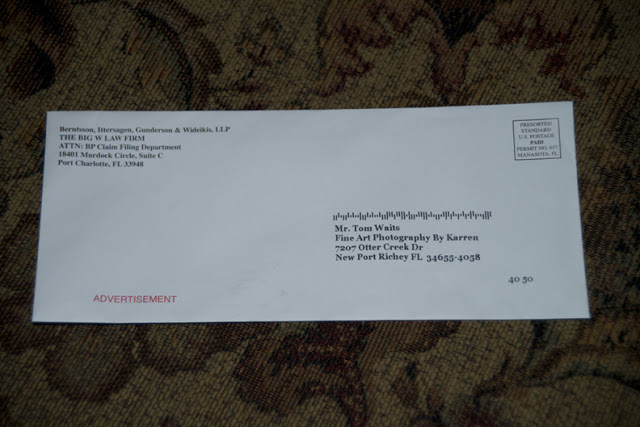