Welcome to the first edition of the blog’s new feature: Throwback Tuesday Post (TBTP)!
Each week on Tuesday, I’ll re-post a past post that I think is relevant and that you’ll enjoy. Please leave a comment on this post and let me know what you think.

This post was originally published on December 8, 2011, and updated on September 25, 2018.
Throwback Tuesday Post from December 2011:
Because it’s that time of year, here’s the story of my first visit to the genuine Oktoberfest in Munich, Germany:
My husband and I ventured to Munich, Germany, for my first foray into the biggest beer party in the world: Oktoberfest!
Tuesday morning first thing we made our way to the Theresienwiese, or Theresa’s Field, where Oktoberfest is held. Tuesday morning just before 10am is one of the best times to go; it’s family day and a large part of the visitors are there to bring the children for the rides. That means there are fewer beer drinkers filling up the tents that early.
There is a subway stop that deposits you just outside the fest grounds: 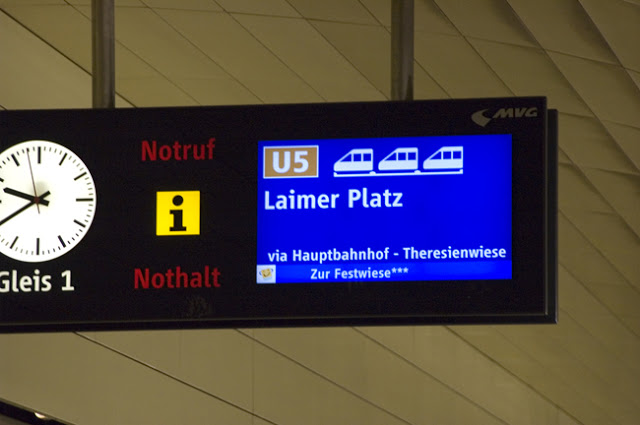 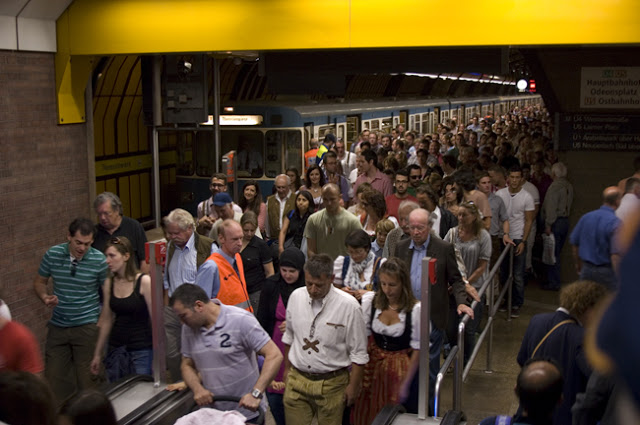 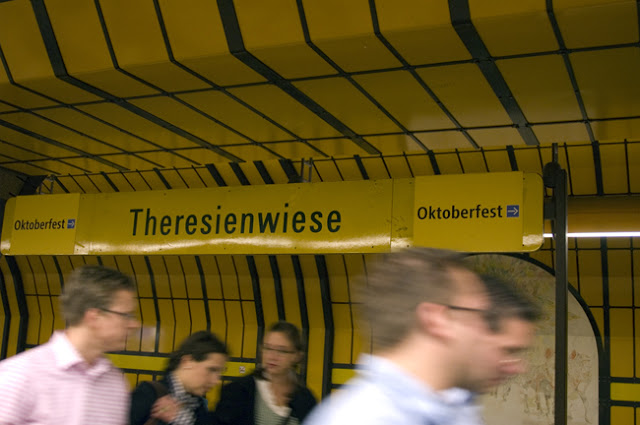 I shot this guy in full Oktoberfest regalia on the escalator: 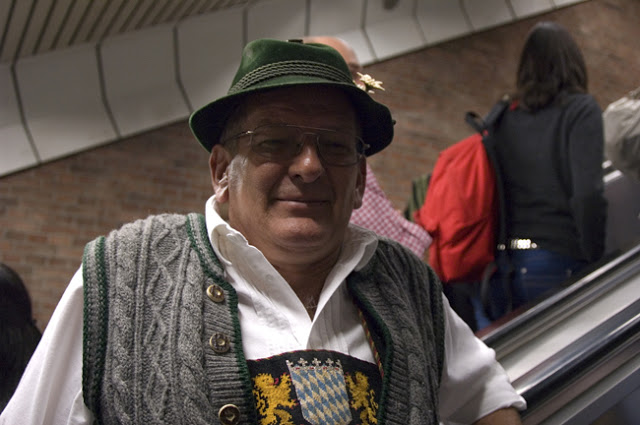 Here’s my hubby celebrating the fact he is at the Oktoberfest gate! 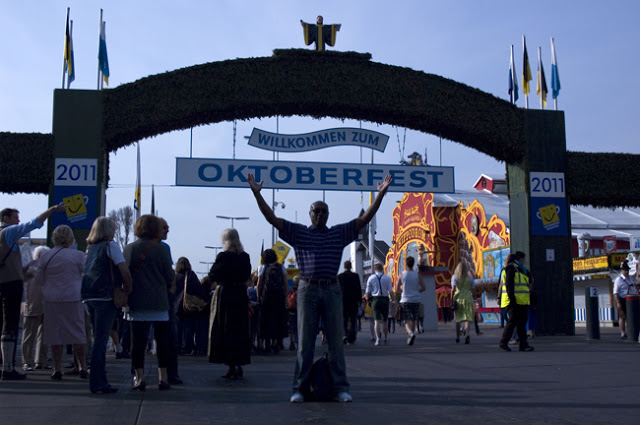 This was my very first visit to the real Oktoberfest. I’ve been to dozens of little local fests, but this one was all that plus steroids! Think of it as a giant carnival with two midways. One midway has the requisite roller coaster, ferris wheel, bumper cars and other rides along with snack stands: 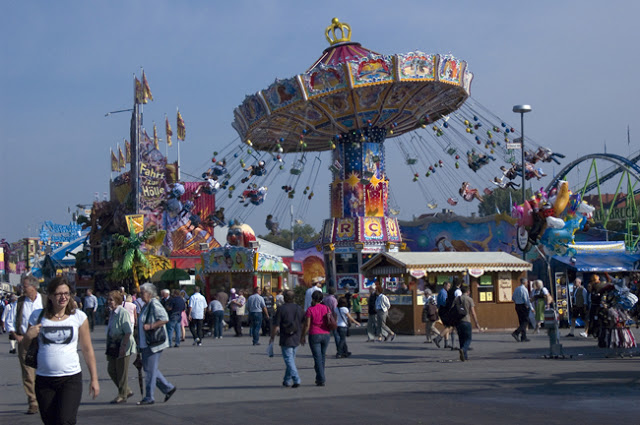 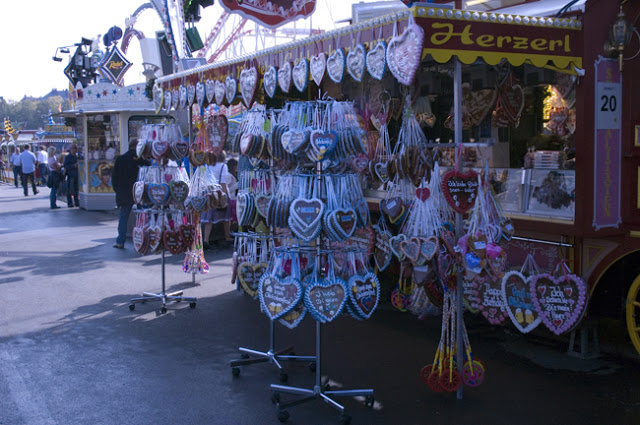 The other midway, and the main attraction, is lined with giant beer tents radiating out on both sides. Fourteen major breweries build these “tents” each year for the occasion. The “tents” are mostly wooden framework with steel girders and tin roofs.
They had the wherewithal to locate the ferris wheel at the end of the beer midway so I could get this aerial shot of the beer tents. Each one of those giant, long buildings is a beer “tent.” 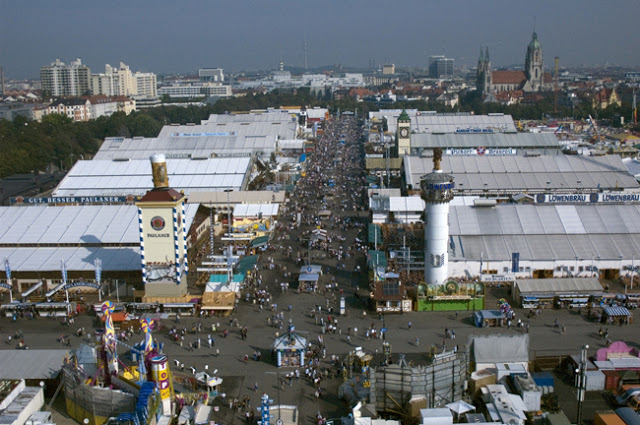 We had gotten there just before 10:00 a.m., which is opening time. I was able to visit most of the tents all the way down the line and get pretty good photographs inside each one before they started filling up and choking with people.
Here is a typical “tent.” That gazebo in the middle is for the band: 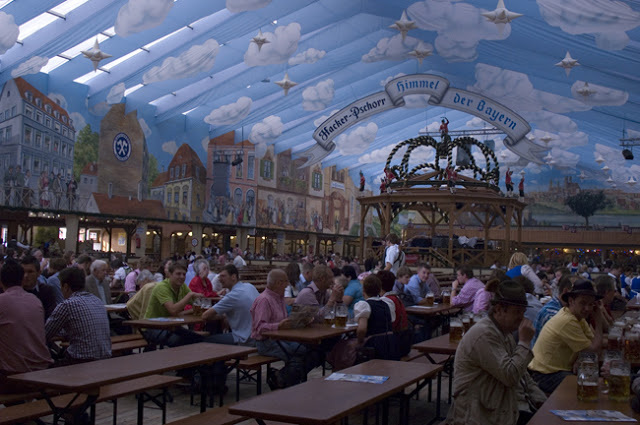 The Lowenbrau tent had a giant mechanical lion over the front door who drank from his beer stein and bellowed “Lowenbrau!” every few seconds! When I showed this photo to my friend Adi, he bellowed, “Lowenbrau!” 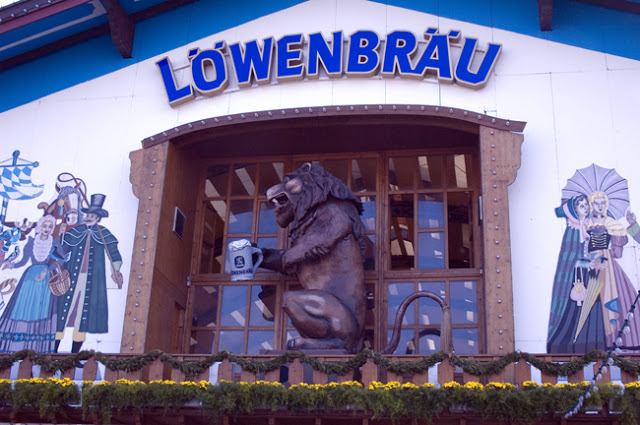 After strolling the grounds and getting oriented, we chose the Augustiner beer tent as our first quaff. Here’s our barmaid: 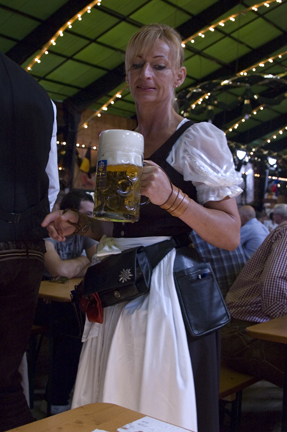 My German friends always told us that they didn’t wait for the foam to settle on the beers before serving them. The “right” way to do it is to let the foam settle then add more beer so the customer gets his money’s worth. Technically, the beer should reach the ring near the top of the glass. The last couple of inches is for the foam. However, things happen fast and furious in the Oktoberfest beer tents, so there’s no time for that sort of thing! 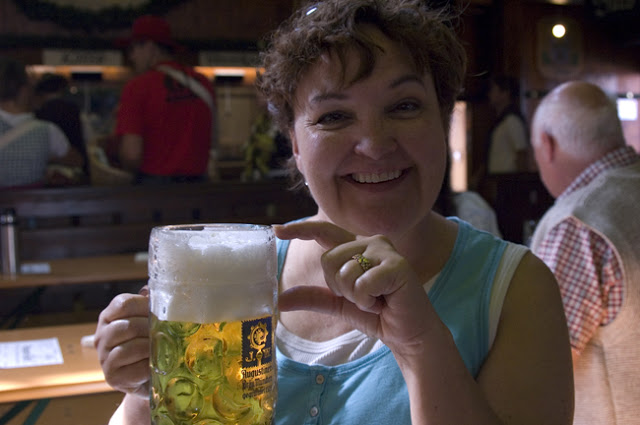 A family from the Basque region of Spain sat down beside us at the table. The coolest thing about Oktoberfest is that you gather best friends from all over the world! Whoever sits at your table with you is instantly your new “family.” These guys were no exception. Here’s our barmaid bringing us our brews: 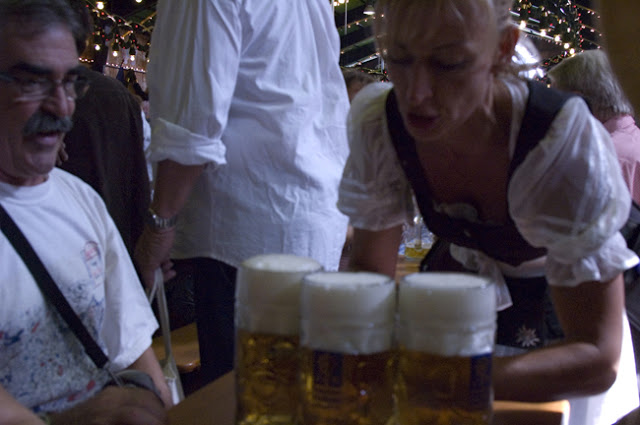 And the most fun – Ein Prosit! You have to do this when they sing the toasting song! 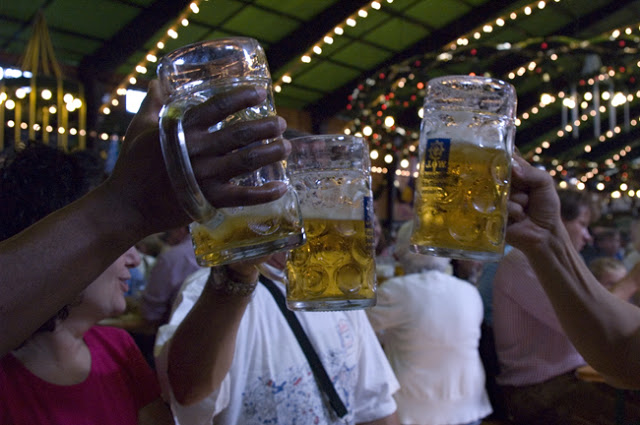 Here’s a shot of our Oktoberfest “family.” My husband, the Spanish mom and dad, the son-in-law and the daughter. The parents didn’t speak English, but that didn’t stop us all from communicating! Notice the thumbs-up from dad – the mustache and eyebrows are real and that thumbs-up was for me! 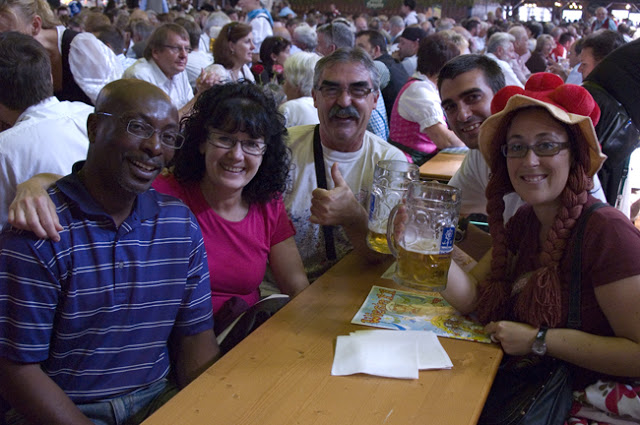 Outside there is all manner of goings-on, such as beautifully decked out horses pulling giant wagons with giant beer barrels: 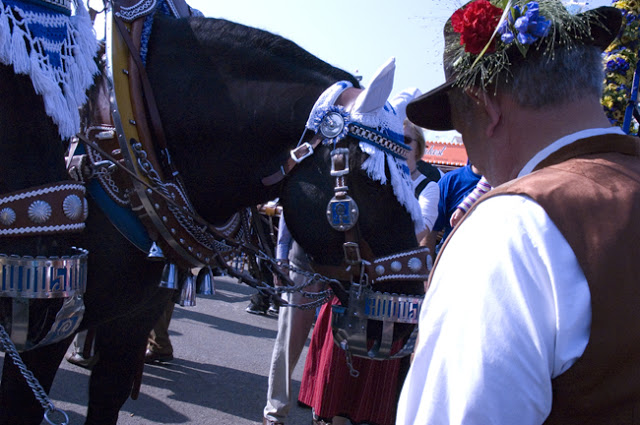 We moved on to the Spaten beer tent later. Here’s a shot of the “oompah” band there. Each tent has its own band that plays German drinking songs throughout the day. BTW, there is even an Oktoberfest TV channel during the celebration! 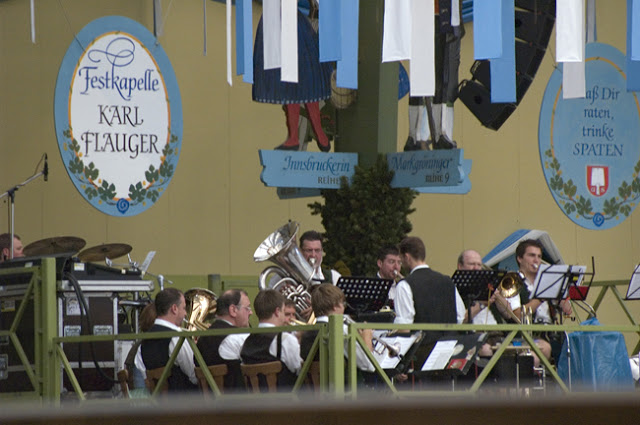 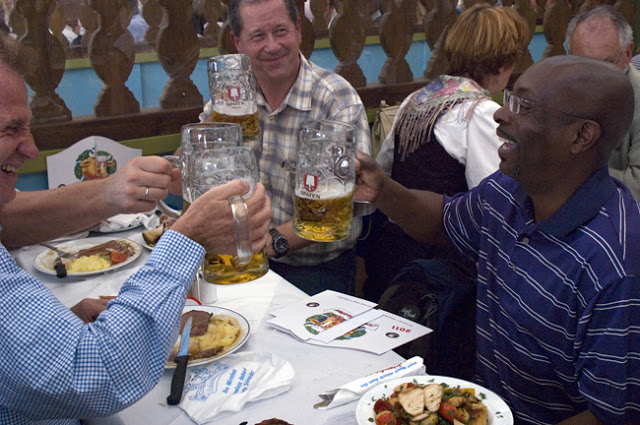 Too soon we had drank all the beer we were about to drink for the day, and I had gotten all the photos I wanted from Munich’s famous fest. It was beginning to get very crowded and the weather had gotten hot, so we decided to flee back to the English Garden for the afternoon. So, it was time to bid Theresienwiese “Auf Wiedersehen!” I would highly recommend anyone to go to Oktoberfest. It’s just a big, jolly beer party with lots of Bavarian sights, sounds and food. Oh, and beer. Most of all beer. 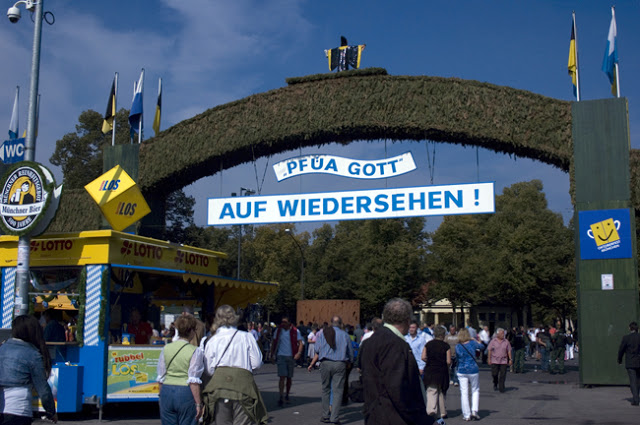 I hope you enjoyed a trip to Oktoberfest with me. It was REALLY hard to choose only a few photos of it. It’s an immense and wonderful place – you should really go! I volunteer to meet you there! 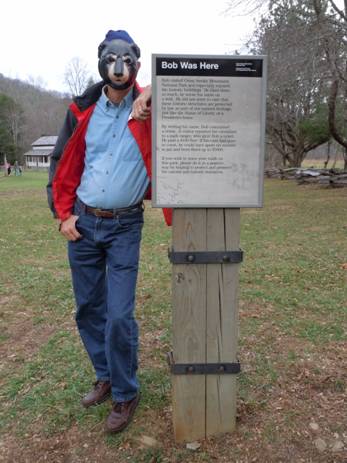