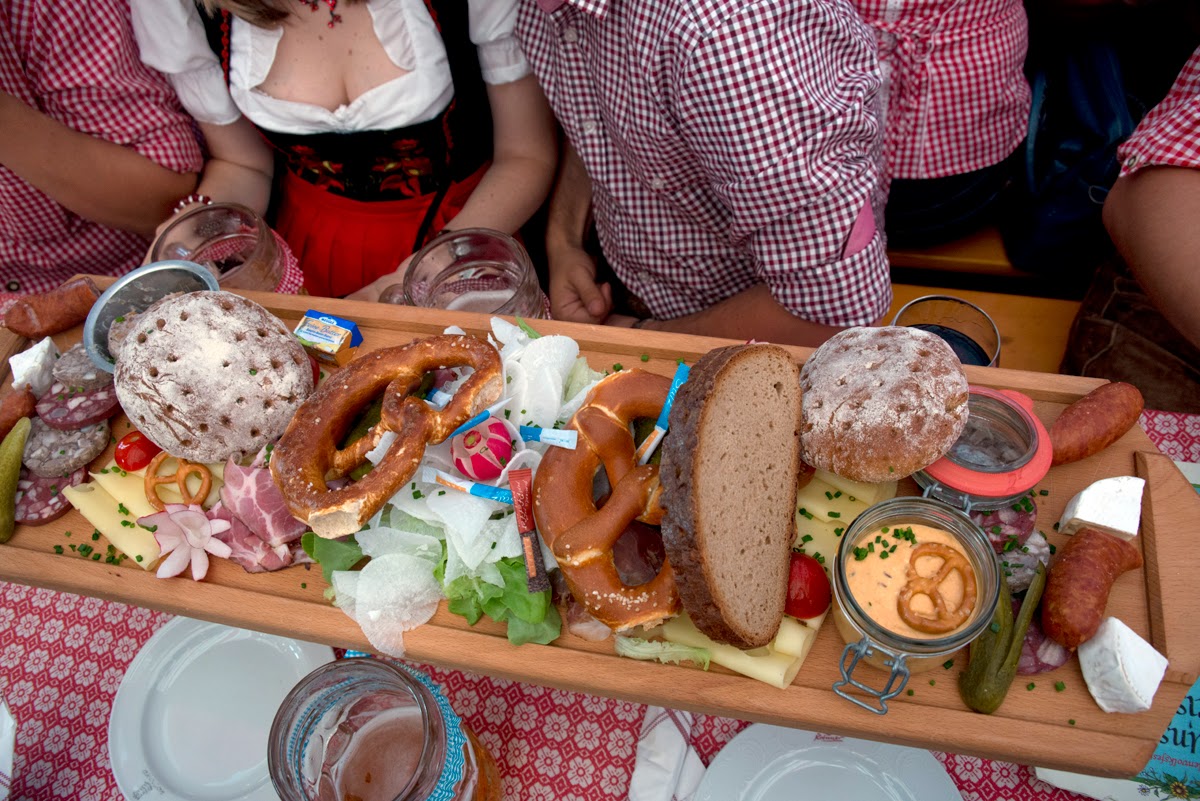 – and full instructions on how to make them in the States:

Just when I thought I knew what to expect around here, my husband came home with an invitation to the Gäubodenvolksfest in the town of Straubing. Because of his job in IT, a vendor gave tickets to clients and he ended up with two. It was a peachy deal – we had a hotel room in nearby Plattling, cushy round-trip charter bus from our hotel, reserved tables at the fest and all the food and beer we could consume.
Regardless of my prior ignorance of the event, the fest is a big deal. It was begun in 1812 by Bavaria’s King Max Joseph I as an annual fair for the people living near the Danube. Today it has a big trade show, six major beer tents, more than 120 carnival rides, numerous food and drink stands, music and about 1.3 million visitors during its 10-day span. By comparison, Oktoberfest has 14 major beer tents, has over six million visitors and lasts 15 days.
We drove the hour and a half to our hotel (Zum Grünen Baum) in a town called Plattling, which lies outside Straubing where the fest was located. It’s a beautiful, small, family-run hotel with friendly staff that speaks English and a cafe on the ground floor. I highly recommend it.
Kerstin, a rep from TechData, the hosting company, met us and invited us to another hotel down the street where the party had already started! We arrived a little while later to a crowded terrace and lots of friendly people in Tracht, which means Lederhosen for the men and Dirndl for the women. We were dressed up, but not in Tracht. That is being remedied, however, for the next fest!
Presently all 67 of us were herded onto a double-decker luxury coach. We knew it would be a beer-centric night when someone mounted the stairs carrying a huge jug of beer, a sleeve of plastic cups and a mischievous grin: 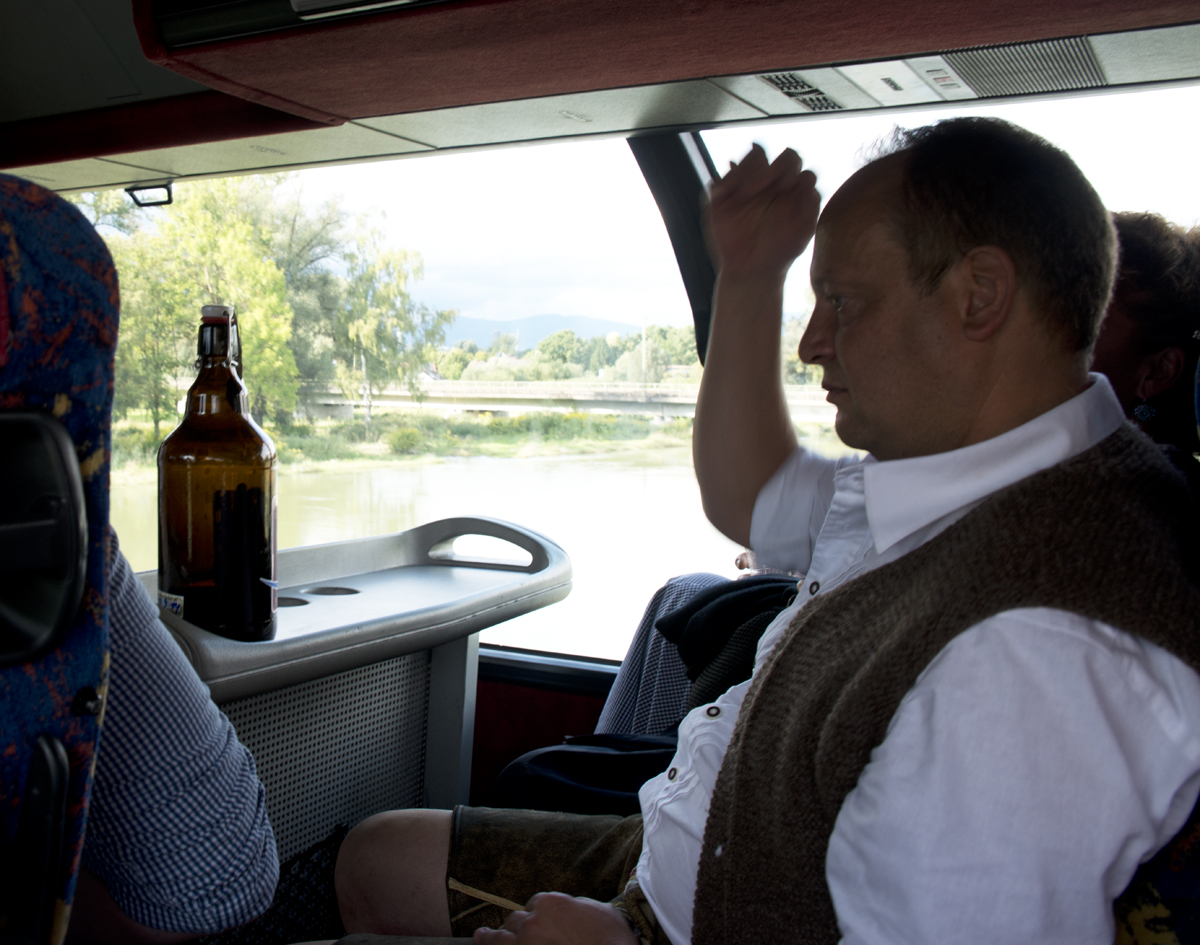 Well, that jug didn’t last long, but we all managed to maintain during the hour drive to Straubing. During the drive, they handed out what looked like little garters that we were to write our names or initials on. I wasn’t sure what that was about. I would find out later.

As with anything in Germany, even with a ride you have to walk quite a distance. We disembarked about a half-mile from the fest grounds. We could see the giant Ferris wheel as we approached: 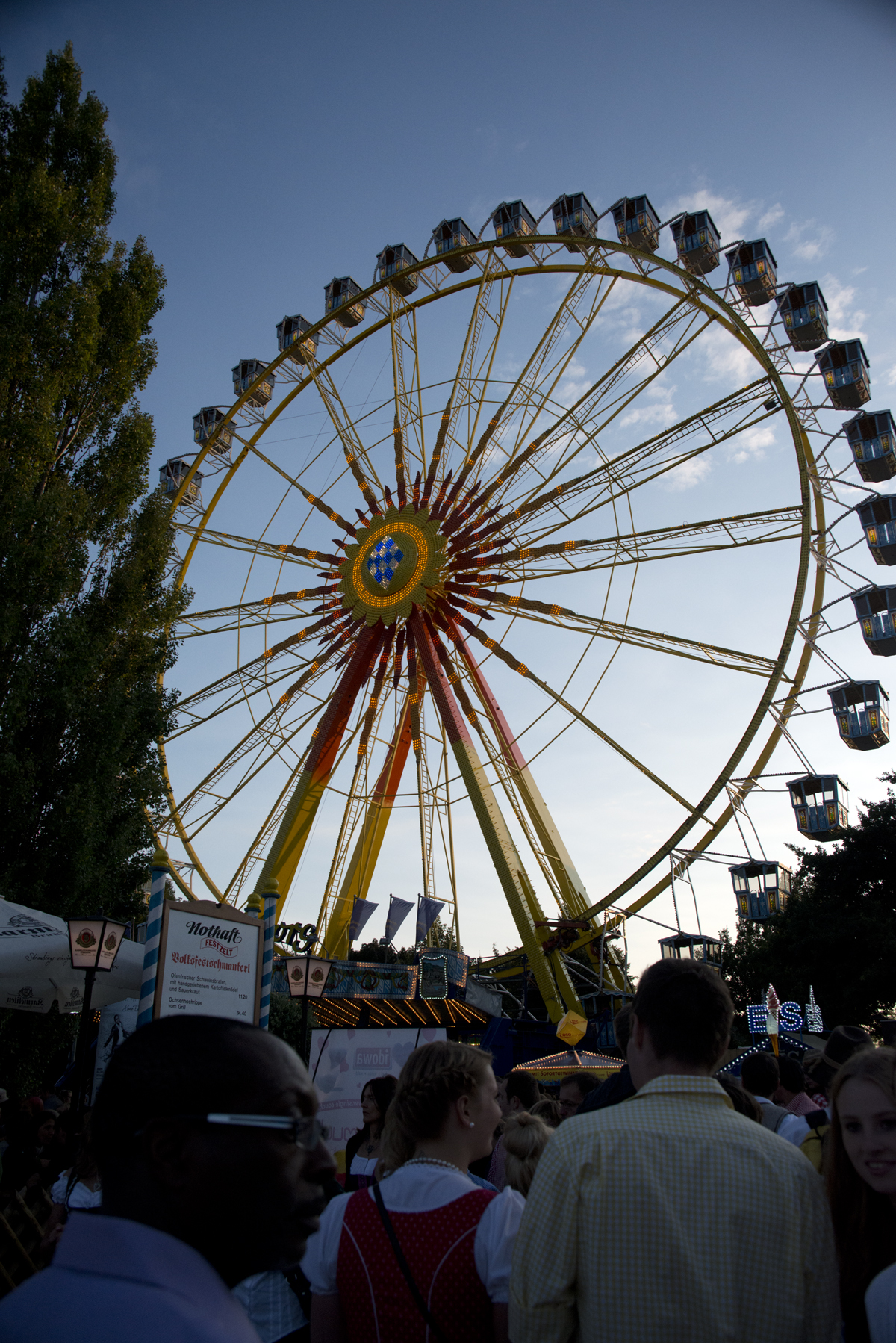 Our tent was the Krönner, a huge structure that holds almost 4,000 people inside with about 1,500 seats in the outdoor area. They served Irlbacher beer, a kind I’d never had before. Local brewers make batches of beer specifically for the fest, of course. Irlbacher Festbier was very good! 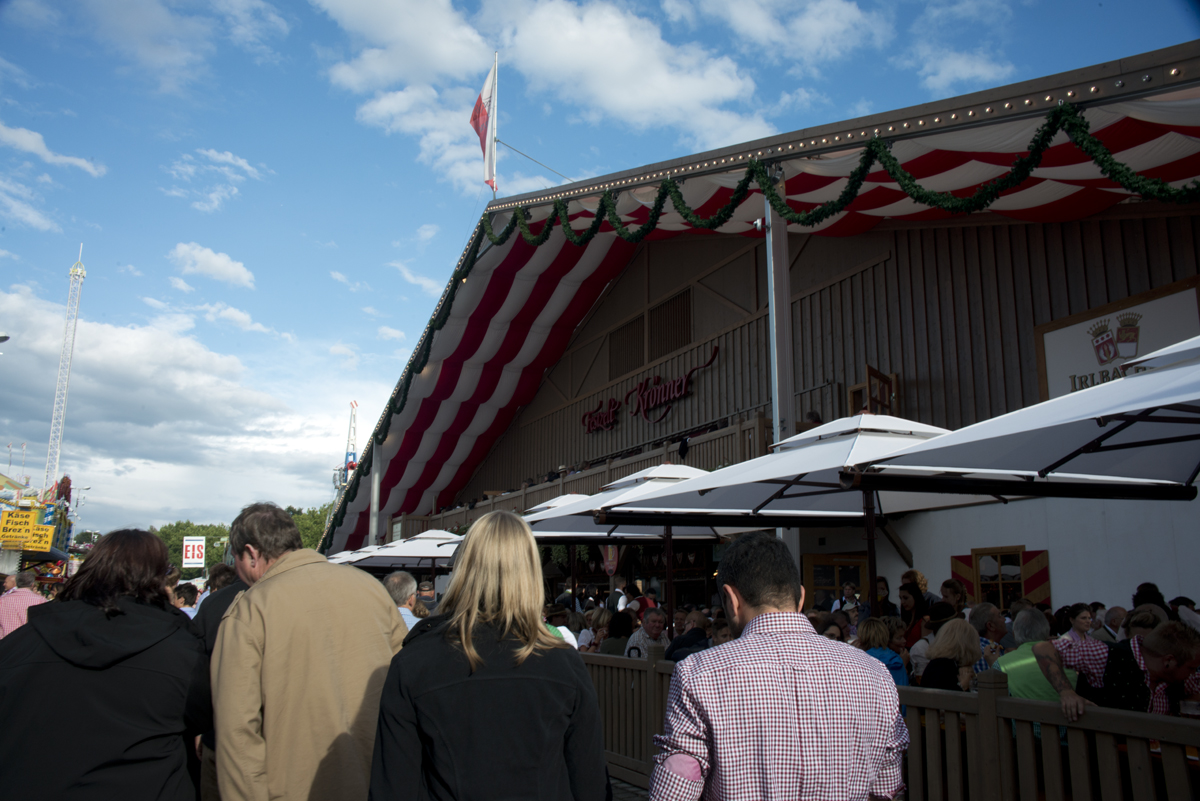 It’s so fortunate that we had reserved tables in the loft area because I had a great balcony to do my photos from. Besides, the tent floor was already getting full: 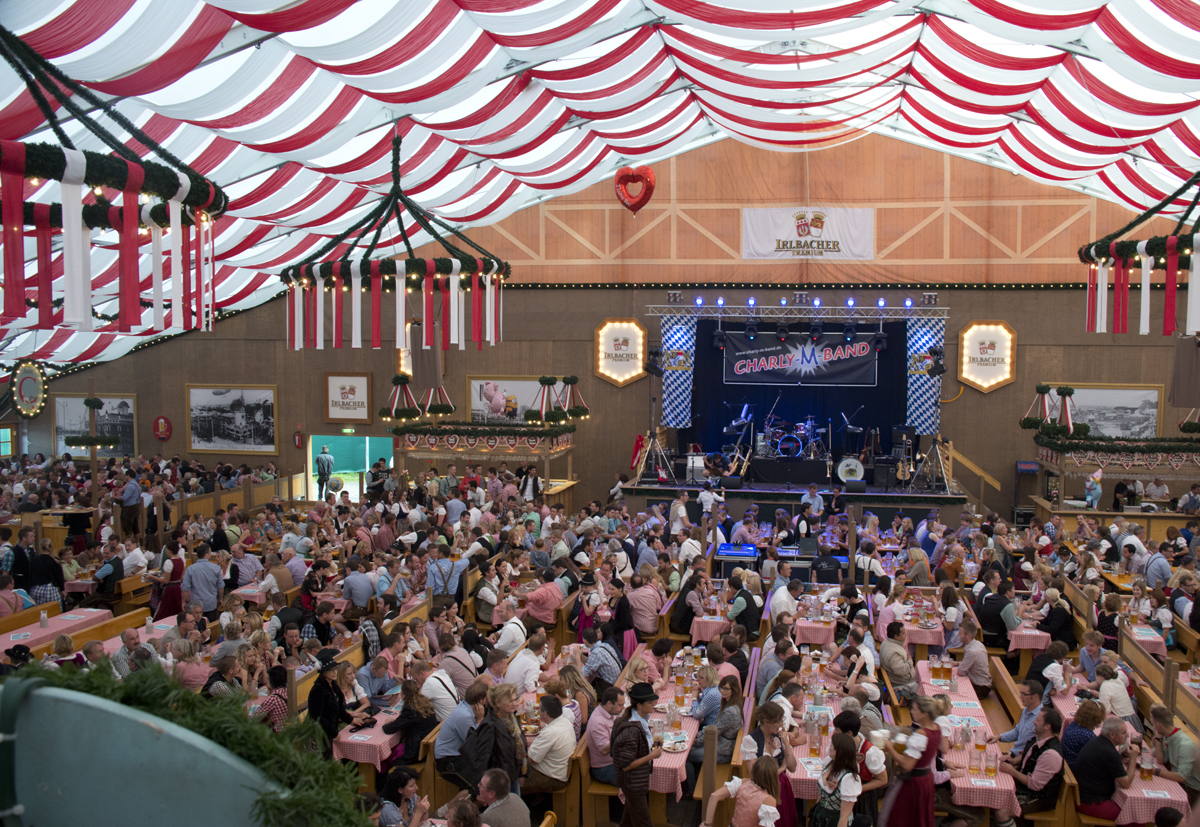 Soon our waitress appeared. She might not have been cheerful, but she was efficient! 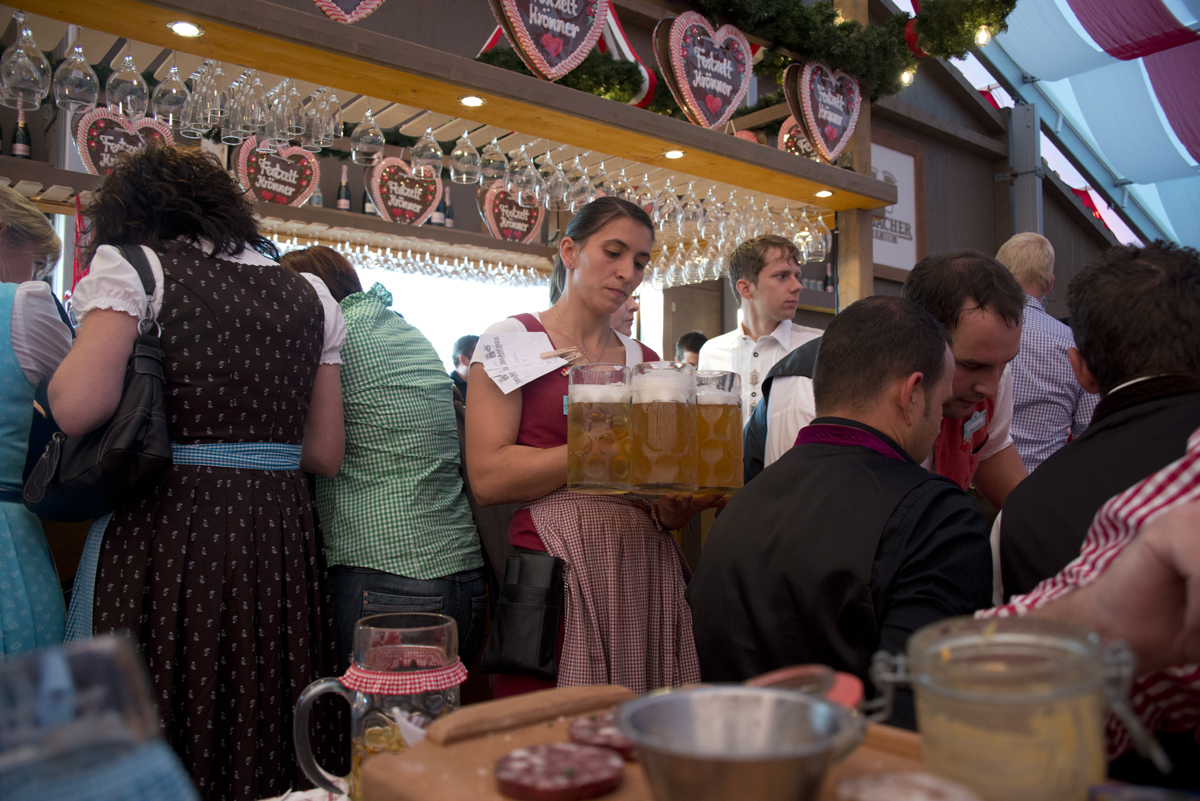 As soon as the beer arrived, we discovered what the small garter thingies were for: 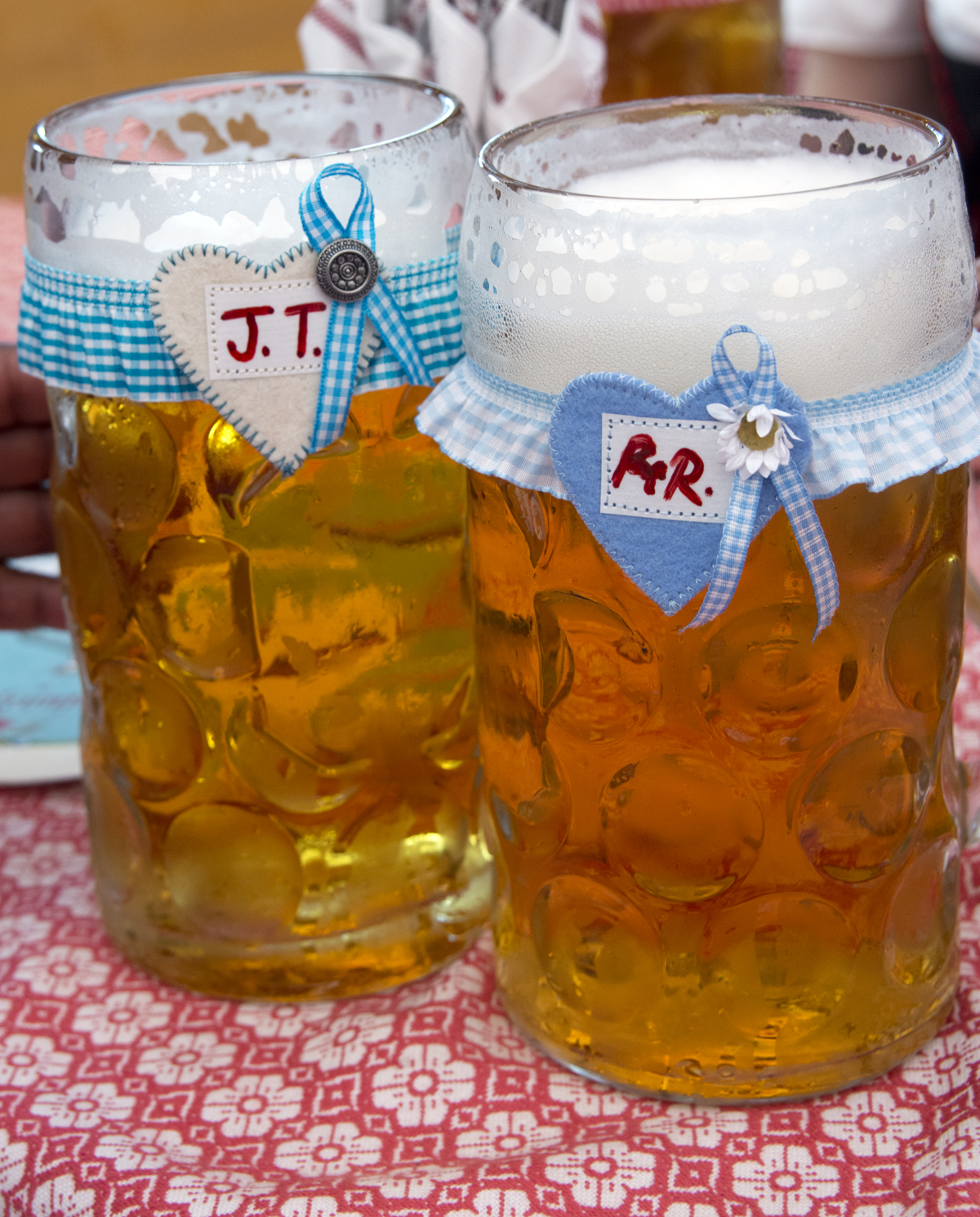 I’ve seen and used wine glass charms, but never beer charms! What a great idea – they kept us from forgetting whose beer was whose. Believe me, we all needed help in the remembering department by the end of the evening! 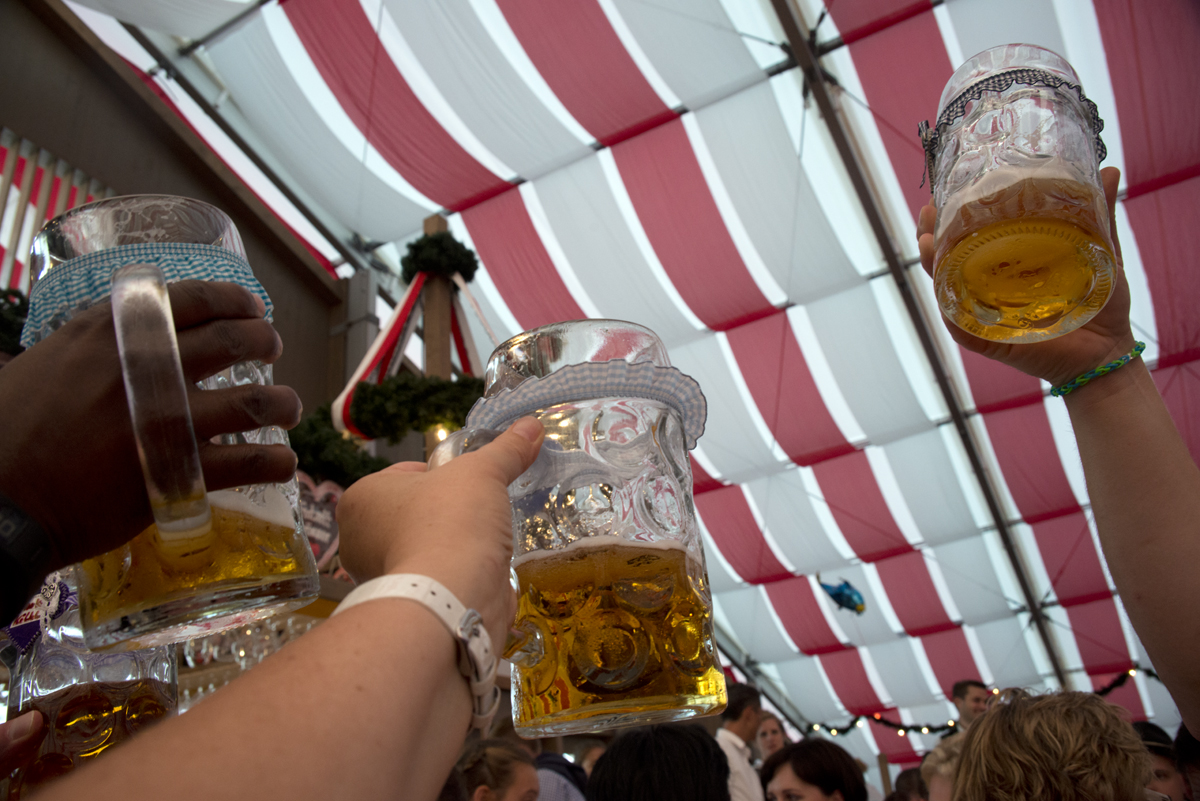 TechData had arranged for each of our eight tables to receive a tray of appetizers. Talk about luscious abundance! 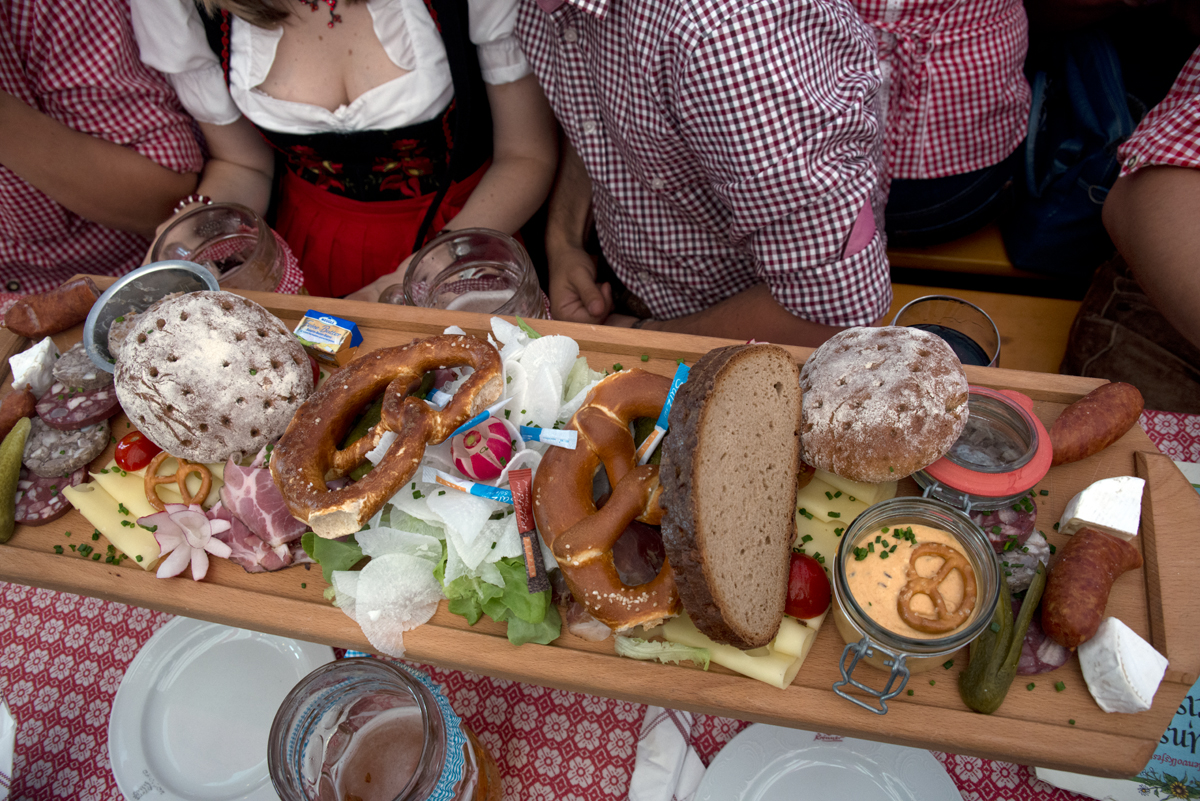 They set the tray on two empty, overturned beer glasses so the plates and other beer glasses could be set under it. Clever.

We made quick work of all the food! We were invited to order anything we liked from the menu as well. My husband had the famous Bavarian roasted chicken. I couldn’t eat another thing! The beers kept coming as well, and many people availed themselves of Schnaps and other libations.

Later there was a pan of Kaiserschmarrn, a traditional dessert I’ve been wanting to try. It’s been described to me as chopped pancakes with sauce, so it didn’t seem like that big a deal. However, this stuff was fantastic! It was rich with lots of eggs, vanilla, raisins and a little rum. Now I have to try the recipe I have for it. I managed this shot before the pan was completely empty: 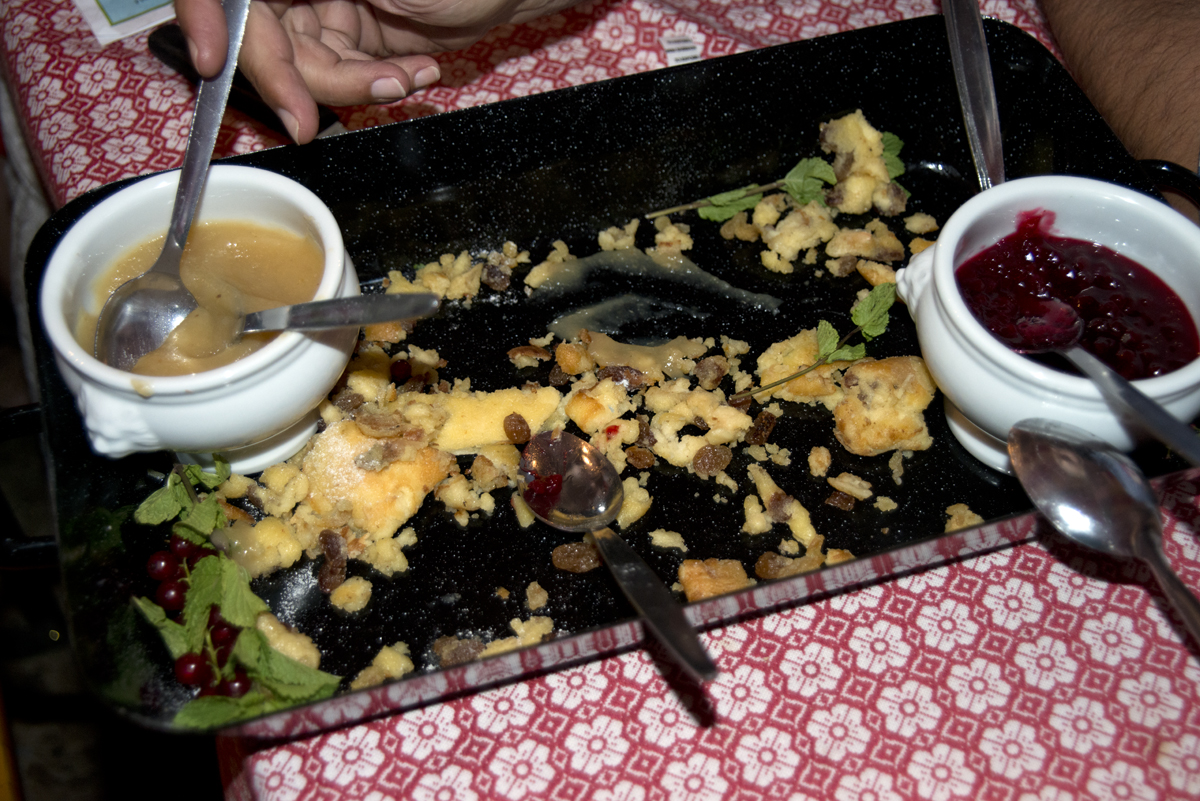 The band showed up and everyone on the tent floor began standing on the benches and tables and dancing. This is typical beer-tent behavior. If you want to dance, there’s no other place to do it. It’s also the reason the girls wear flat shoes with their Dirndls; high heels would mean falling off the benches! 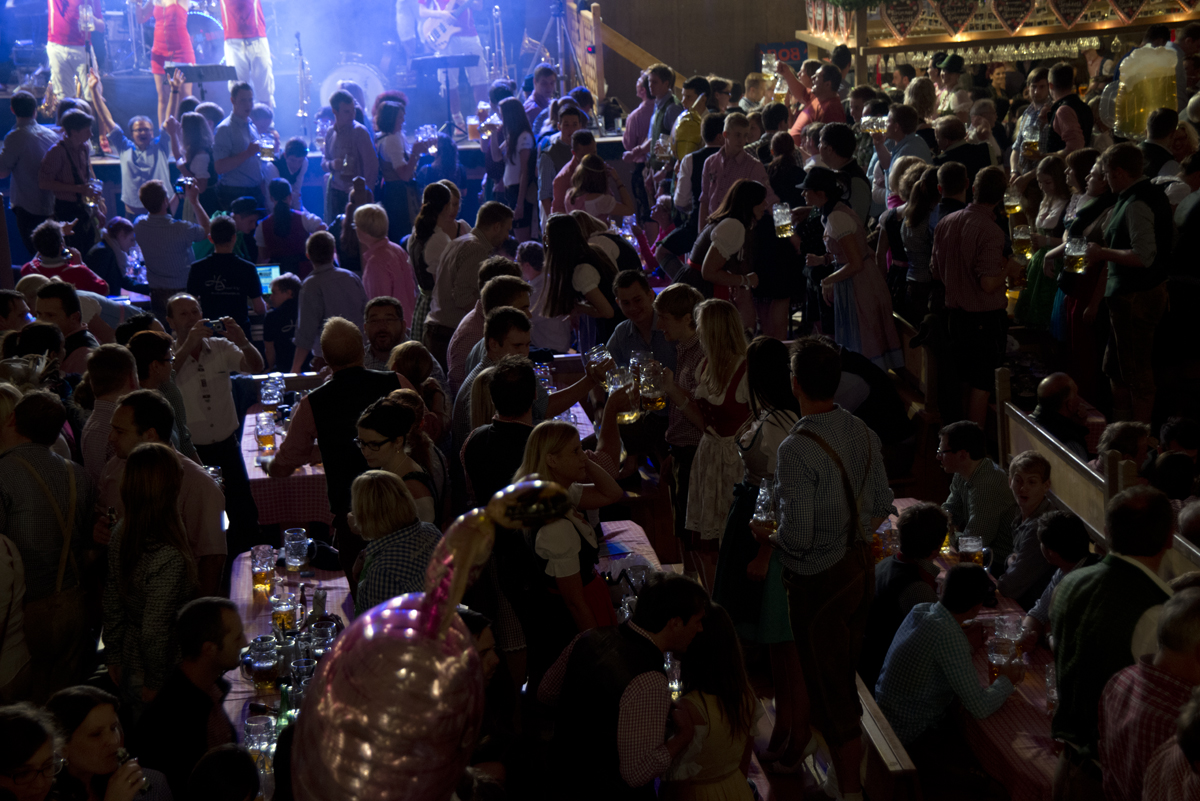 Here’s a snippet of a video I took of the tent from my vantage point as the evening progressed. I attenuated the audio a little to keep your eardrums from bursting – it was truly LOUD!

Gäubodenvolksfest 2014 from Karren Tolliver on Vimeo.

The band was entertaining, if not spectacular, and we even had Minions! 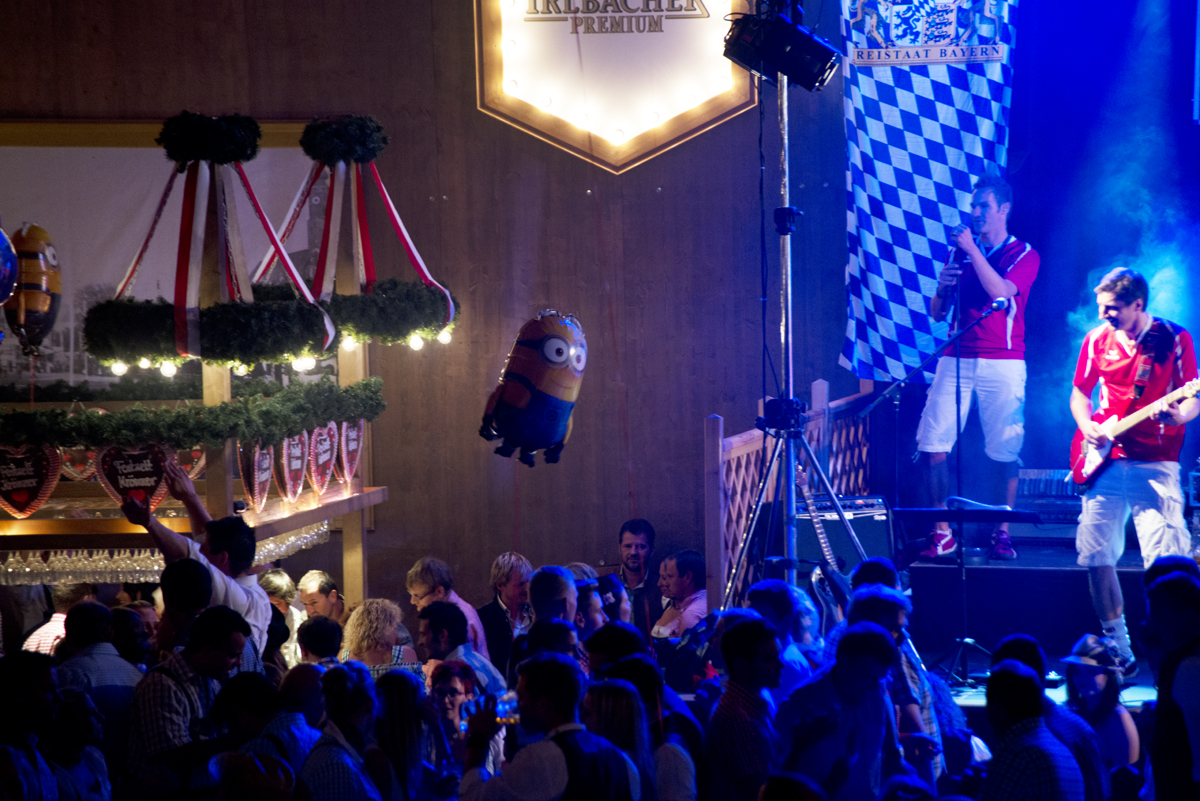 I was going to say that all too soon it was time to go. But for me, I think the timing was good. I’d had more than two Maß of beer (1 liter each), probably three but I lost count! We walked back to our bus and I caught a shot of the Ferris wheel at night: 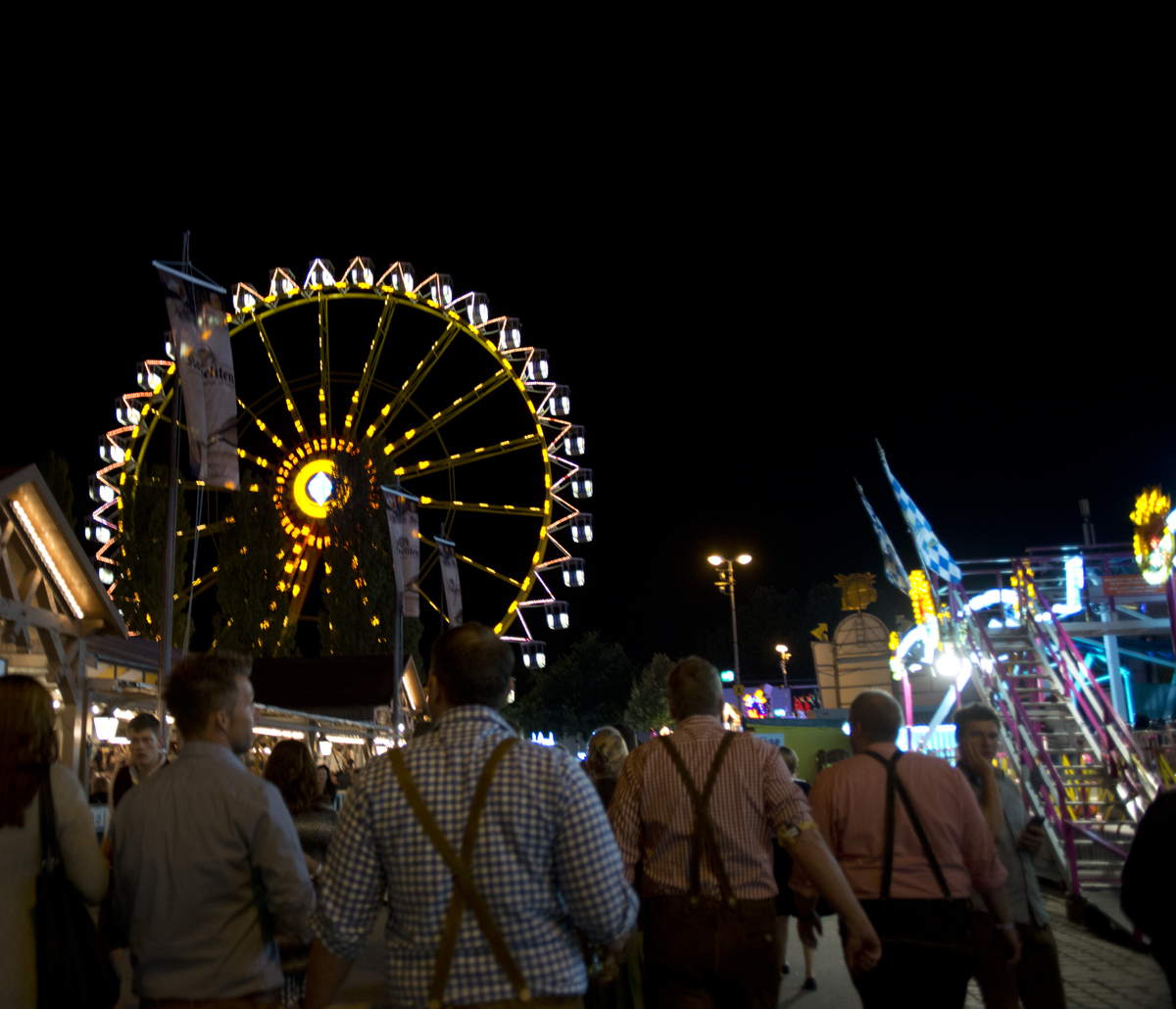 Pretty good for a picture at night while stumbling, er, walking back to the bus!

It was a rowdy bus ride back on the bus, but my husband and I immediately headed back to our hotel when we got to Plattling. However, the party continued, we heard, until 4 o’clock in the morning at the other hotel! Wow!

We met so many fun people that night and are in email contact with many of them now. We are so grateful to my husband’s company and HP who passed the tickets on to us. And especially to Tech Data who showed us the most wonderful time. If any of you are reading this, thank you thank you thank you! It was a class act from beginning to end.

Next time we’ll have our Tracht. My husband already has his Lederhosen and I’m in the market for my Dirndl as we speak. Maybe I’ll have it in time for Oktoberfest. I have exactly one month from today to shop for it. And flat shoes. 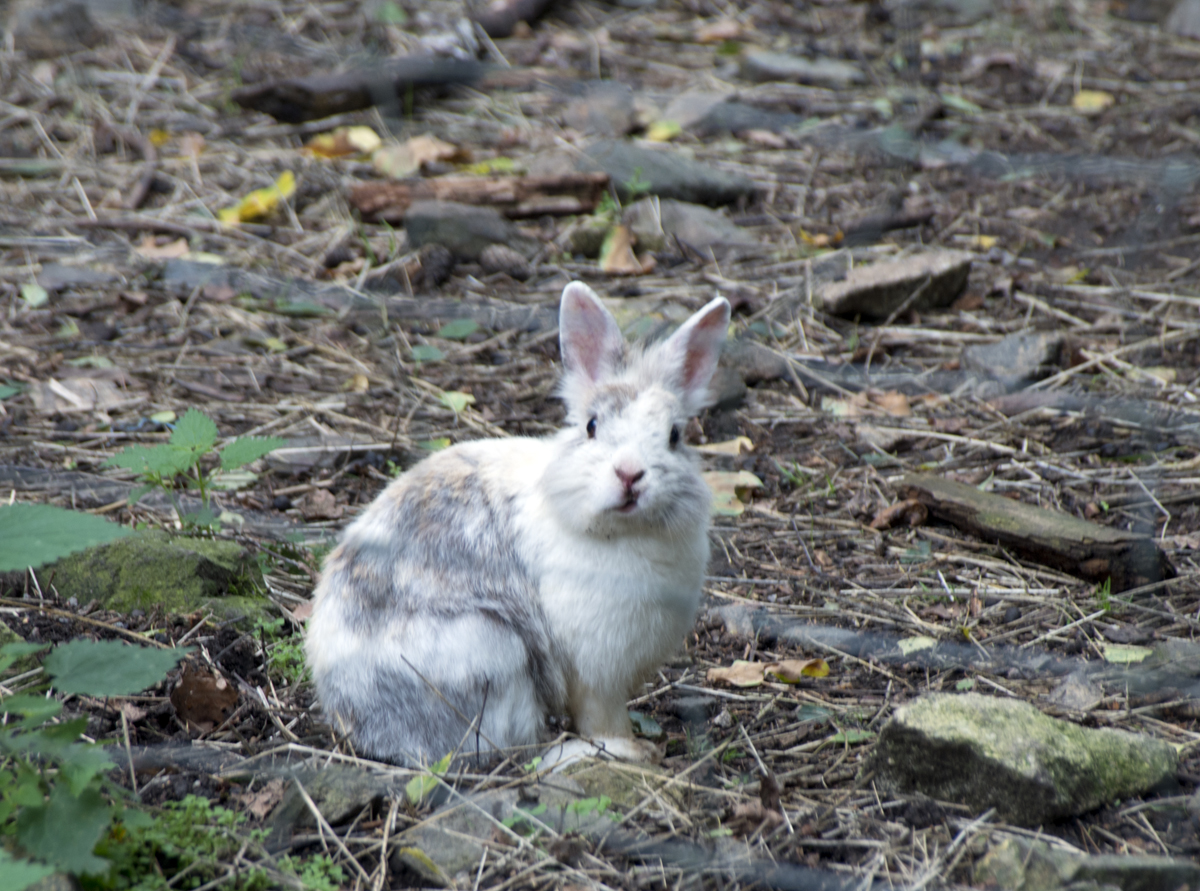