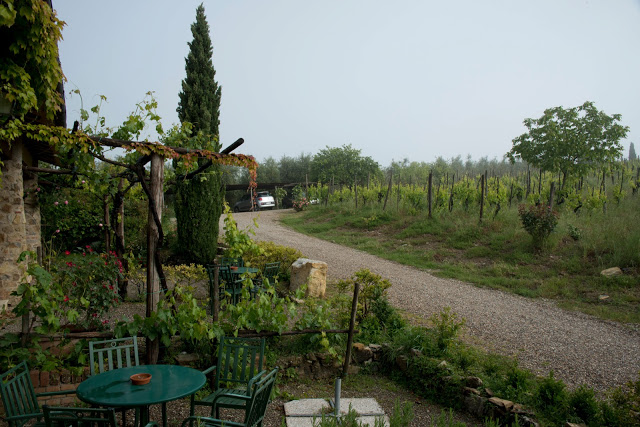 NOTICE: As an economic stimulus, Germany has reduced the VAT (value-added tax = sales tax) for many items, including books, from now through December this year. If you live in Germany, now’s the time to buy one or more of my books! Remember that I have English-learning workbooks as well as cookbooks and photography books. Click the link below and buy today!

Buy my books on Amazon!

Lately there has been lots of settling into a new routine with my husband here in Germany. Plus lots of daytrips and overnighters with friends before the husband started work and before our friends leave the country because the Army says they have to.

On Memorial Day weekend, our little foursome, consisting of my husband and me plus our good friends Carmela and Ivan, set out for Italy. We met at the Bamberg train station about 5pm on Thursday evening and hopped a train to Nuremberg to catch a flight on RyanAir to Pisa.

You need a little back story here on RyanAir. It’s a VERY cheap airline within Europe and well run, kinda like Southwest when it first arrived on the scene. But they are very militant about your following their rules to the letter. For example, you must absolutely NOT have a carry-on larger than stated and you must have your printed boarding passes in your hand before you show up at the airport. Period. Otherwise, you have to pay a hefty fee – about $100.

Ivan and Carmela confessed that they had printed out their boarding passes but that they had left them at home! Well, hmmm. Now, this train stops for about a half a minute at a village called Hirschaid, about 20 minutes from Bamberg, on its way to Nuremberg. More back story: Carmela and Ivan live in Hirschaid and Carmela’s sister Irasema was visiting from Mexico and staying at their apartment.

So, Carmela called Irasema who somehow, if not frantically, found the boarding passes and raced our train to the Hirschaid station. And since a picture is worth a thousand words, here’s a couple of videos to let you know what happened:

Otherwisde, our trip to Tuscany was everything you could imagine a trip to Tuscany could be! We stayed at a place called Fattoria di Corsignano. It’s what the Italians call an agriturismo, which is a working farm (in this case a winery) that provides guest accommodations. I’ve read there are about 20,000 agriturismi in Tuscany, all with varying degrees of luxury. At the low end, you can even help work the farm! Ours wasn’t quite so primitive.

Since I had nothing else to go on, I chose this one because I liked the pictures on their website. We were not disappointed. Here is the view from the front porch of our apartment:

However, before we get to the class, I have another travel story for you:

The rental car we reserved did not include a GPS because both couples have portable GPS devices. However, they assumed we would bring ours and we assumed they would bring theirs, which resulted in neither of us having a GPS on the trip.

No problem, we thought, the rental car place will have one for us. No dice. Ivan even checked all five other rental counters and they didn’t have any available, either. We used his smart phone for a while til it led us astray and then the battery died. I ended up calling the people who own the bed and breakfast we stayed at the first night in Pisa and they came to rescue us. But that’s not the travel story I will tell here.

After Pisa, we knew there was absolutely no way we could accomplish our trip without a GPS. The Italian roads were just too confusing and we would be driving a lot of backroads. We scoured downtown Pisa for an electronics shop with no luck. Fortunately there is an Army base, Camp Darby, just outside of Pisa, so we headed there.

Ivan, who seems to be always the designated driver (I have dubbed him Drivin’ Ivan), signed us civilians onto the base and we proceeded to the PX. No GPS to be found there! We spent a little while wandering around trying to figure out what to do. Ivan began asking passersby if they knew where we could buy a GPS. To a person they responded, “Try the PX.” Ah, well.

We returned to the car to contemplate the matter further. After some brainstorming and shrugged shoulders, a black car, maybe a Grand Prix?, pulled into the parking space beside us, which was weird because there were practically no other cars in the lot that day. I noticed a 4-Sale sign in the window, which told me the owner was probably getting ready to be transferred off the base soon.

When the driver and his wife emerged, Ivan asked if they knew where we could buy a GPS. “Try the PX.” We explained we’d done that and that we could absolutely not continue our trip without navigation. The guy looked left, then looked right, then said in a quiet voice, “I’ll sell ya mine.”

“How much?” my husband asked. “Fifty dollars.” “Done!” said my husband and we all started pulling out our wallets to find enough American money to pay the man. In the meantime he explained his TomTom GPS had all the latest updates of European maps, and we also found out his name was Justin and that he was, indeed, leaving Italy in a few days.

We did the transaction in the parking lot just like the Homeboy Shopping Network and shook hands with Justin and his wife for saving our trip! We were so happy!

I christened the new device TomJustin and Ivan hooked it up. 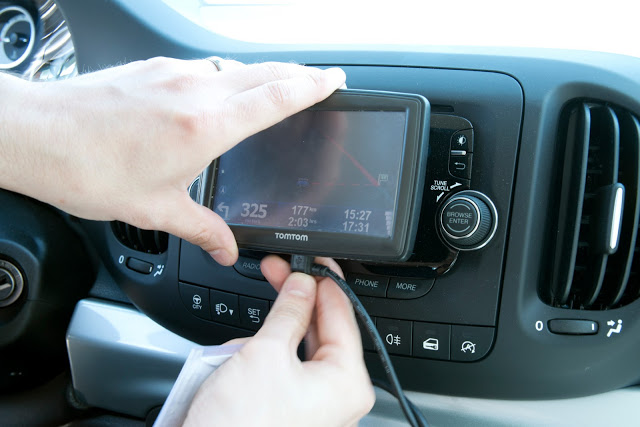 TomJustin served us well, except for one minor incident. On the way to the cooking class on Sunday, which was maybe an hour away from where we were staying, I was riding shotgun since I had seen the pictures of our destination on their website and no one else knew anything about it. I was so qualified!

Anyway, about halfway there things seemed to be going smoothly when Drivin’ Ivan came to a stop just before a sharp right bend in the road we were on. He said nothing, only looked right and then left toward a break in the vegetation on the other side of the road. Frankly, the break looked to me like a dropoff down from the pavement.

“What’s up?” I asked. He again said nothing, just pointed at TomJustin. The GPS was telling him to drive through the vegetative break, which, again, did not even look like a road to me. I said as much and voted to follow the main road.

Just then, a car popped up out of the break, proving there was actually a road there. For some reason, the driver, an older man, was smiling broadly and waving at us as he sped by. So Ivan followed the GPS advice. Here is what I saw (and I’m still not sure what possessed me to photograph this!): 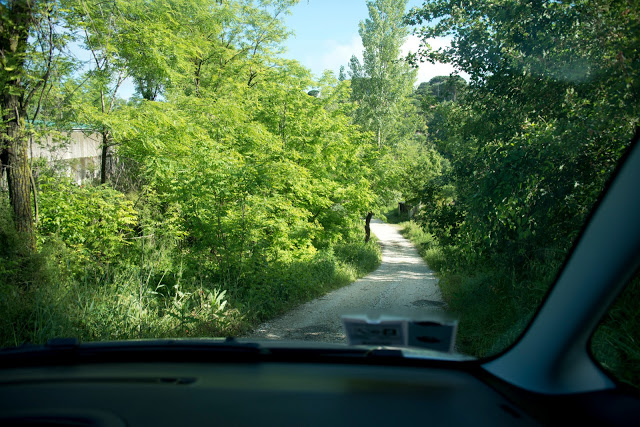 And the road continued to narrow: 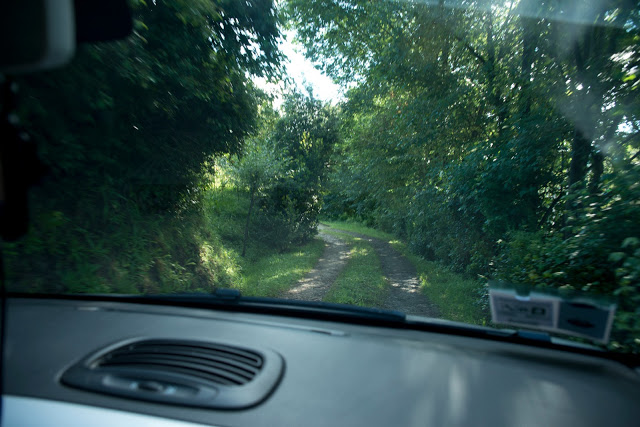 Then it became paved again, so we got our hopes up a little: 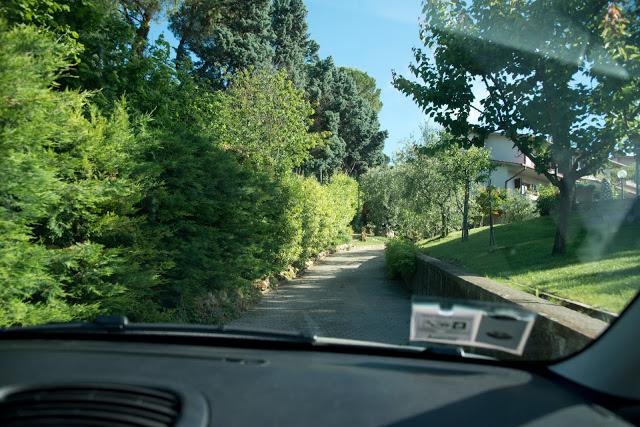 But just then, the “road” abruptly ended in someone’s backyard! 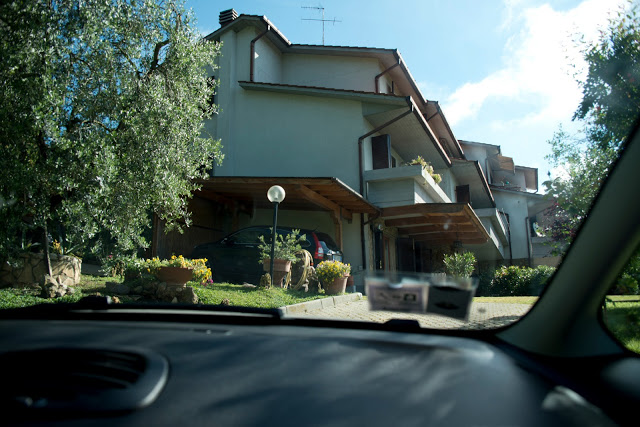 We sat here for a few minutes as TomJustin urged us to proceed 300 meters and turn left. Well, if we’d done that, we would have ended up in the kitchen! Seriously, there was nowhere to go. This was someone’s driveway! Probably that guy that passed us smiling and waving. Maybe we weren’t the first ones to be led to his house by a GPS!

And the driveway was too narrow to turn around in, so James got out and acted as ground guide as Drivin’ Ivan once again earned his nickname and backed out of this narrow path until we found a spot wide enough to turn around in.

Later Ivan programmed TomJustin to show us “only paved roads” and there were no further untoward incidents. I still cannot imagine how that driveway got on a satellite map as a road! Oh well!

So I’m going to break off here and let you wait until next time to find out about the great cooking class. Please stay tuned. This trip was amazing and I have lots of posts to make about it! 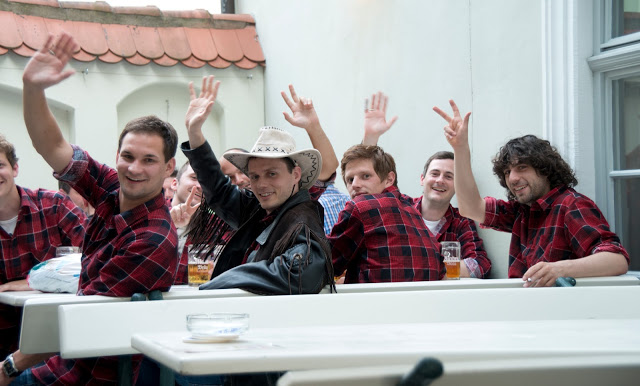