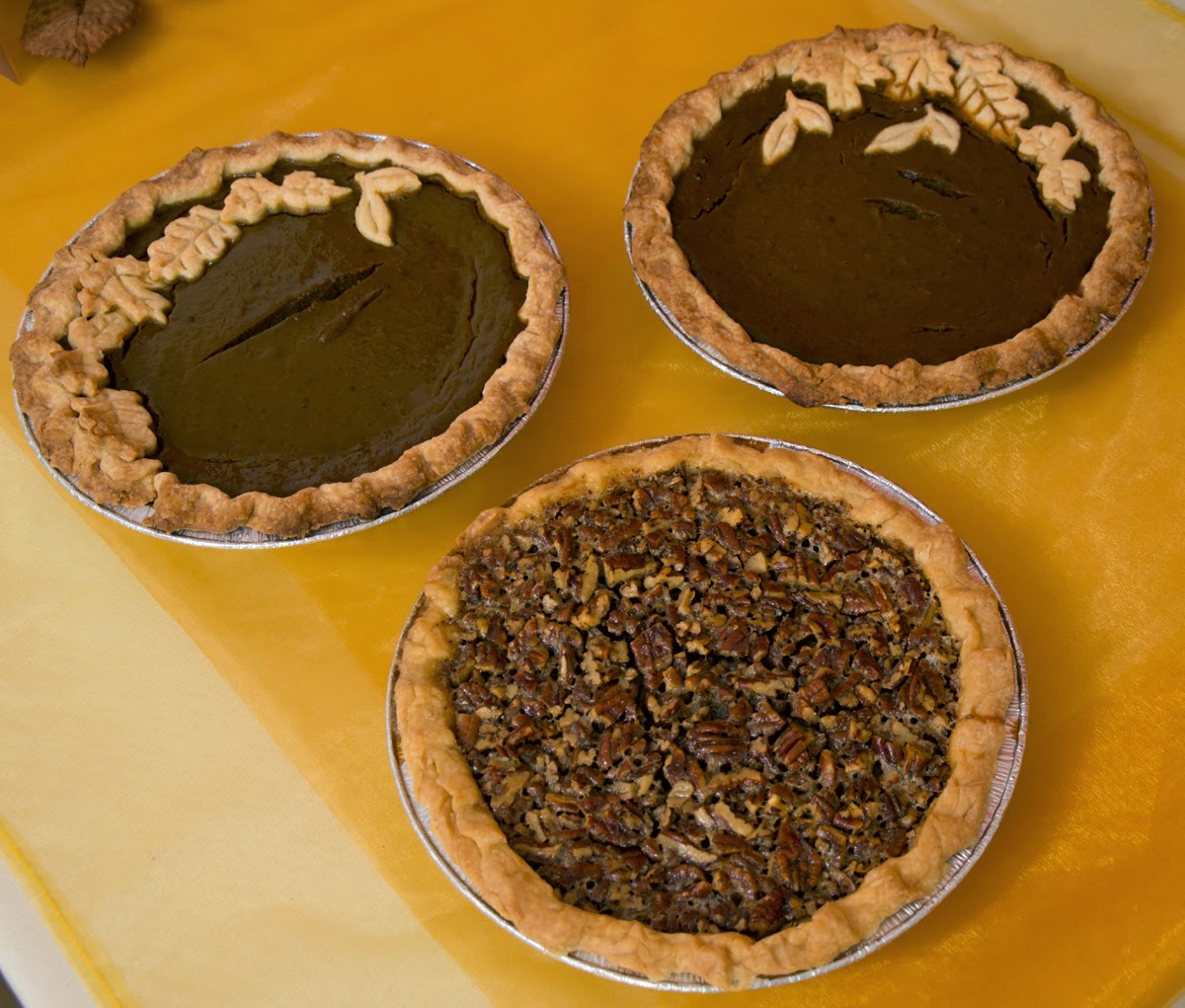 The holidays are fast approaching! Do you have your copy of ATFT-AppSnax? It’s my latest cookbook and features delicious appetizer and snack recipes, great for those upcoming parties, potlucks, guests and cocktails. If you want easy, this is it. The book has two sections: no-cook/no-bake and recipes requiring heat. This book is indispensable in your own kitchen and makes a wonderful gift for the cook on your gift list!

I’ve blogged about this before, but I’m making huge progress on it each year, so I will blog about it again: making Thanksgiving dinner in a country other than the States. This year, of course, we are living in Garching, a suburb outside Munich, Germany.

November was a busy month for me. In addition to Thanksgiving dinner prep, I made some home decor improvements, including curtains in the living room and my husband’s office. Since we’re in an apartment and the walls are incredibly hard (no dry wall here, only concrete), I am loathe to make holes in them. Firstly, it would take a heavy-duty hammer drill to make the holes, and then we’d be in for an expensive repairman to come fill them when we move out.

So, at the suggestion of one of our former neighbors in Florida (thanks, Sean!) I brought some3M Command self-adhesive hooks back from the States with me earlier this year. I used them to hold the curtain rods and boy are they great! What a wonderful product! I used the picture frame strips to hang a large wall hanging in both rooms, too. Add the rug and couch pillows we bought for the living room and we no longer look like we’re living in a hostel – yay!

In addition to the aesthetic home improvements, we also bought a big folding table and six folding chairs to accommodate the guests we’d invited to Thanksgiving dinner, plus a couple of extra dinner and dessert plates and silverware to round out the table service.

I started Thanksgiving week by making quilled placecards for everyone. Click here to see a tutorial about how I did it on my quilling blog.

I still had to go food shopping, which I’d actually started a few weeks earlier. Since our guests were all non-Americans and it would be their first proper Thanksgiving, I wanted everything to be as traditional as possible. This meant a whole turkey, which is harder to find than you might think.

I’ve learned that, if you actually find a whole, frozen turkey in a German supermarket, just buy it no matter what month you find it because there may not be any when you actually want to cook one. So, I grabbed the first and only one I found around the first of November. It was at a gourmet supermarket near Marienplatz. Unfortunately, it was very small. I had to check the label twice to ensure it was a turkey and not a rather big chicken. It weighed only three kilos, or about six pounds. Six pounds!

Fortunately, in shopping for other ingredients a couple of weeks later at a different store, I managed to find a more respectably sized turkey, 6.5 kilos, or about 13 pounds. Still small by American standards but at least it looked like a real turkey.

Here’s a picture of them both side by side: 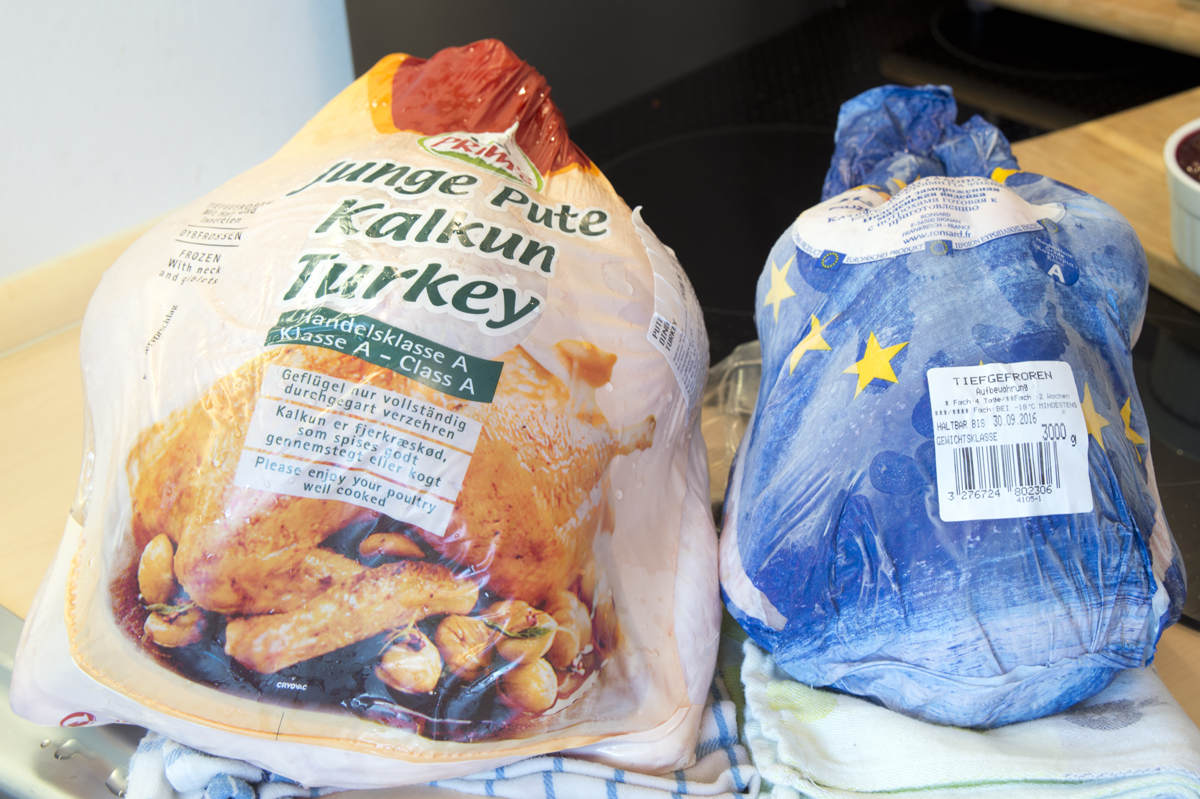 Of course I cooked the one on the left. The wee tiny one is still in the freezer. And it’s probably best the larger turkey wasn’t any larger because it wouldn’t have fit in my small German oven anyway.

Because Thursday was a regular work day here in Germany, we hosted our dinner on Saturday following Thanksgiving. So on Wednesday that week, I took the turkey out to thaw in a cooler on the balcony (benefits of living where there is winter).

On Thursday I made my own cranberry sauce, which you can’t find in a can here, either (not that I’d serve the canned stuff anyway). I found the fresh cranberries at the same gourmet market where I found the tiny turkey. Most cranberries are US products, so not very popular abroad. 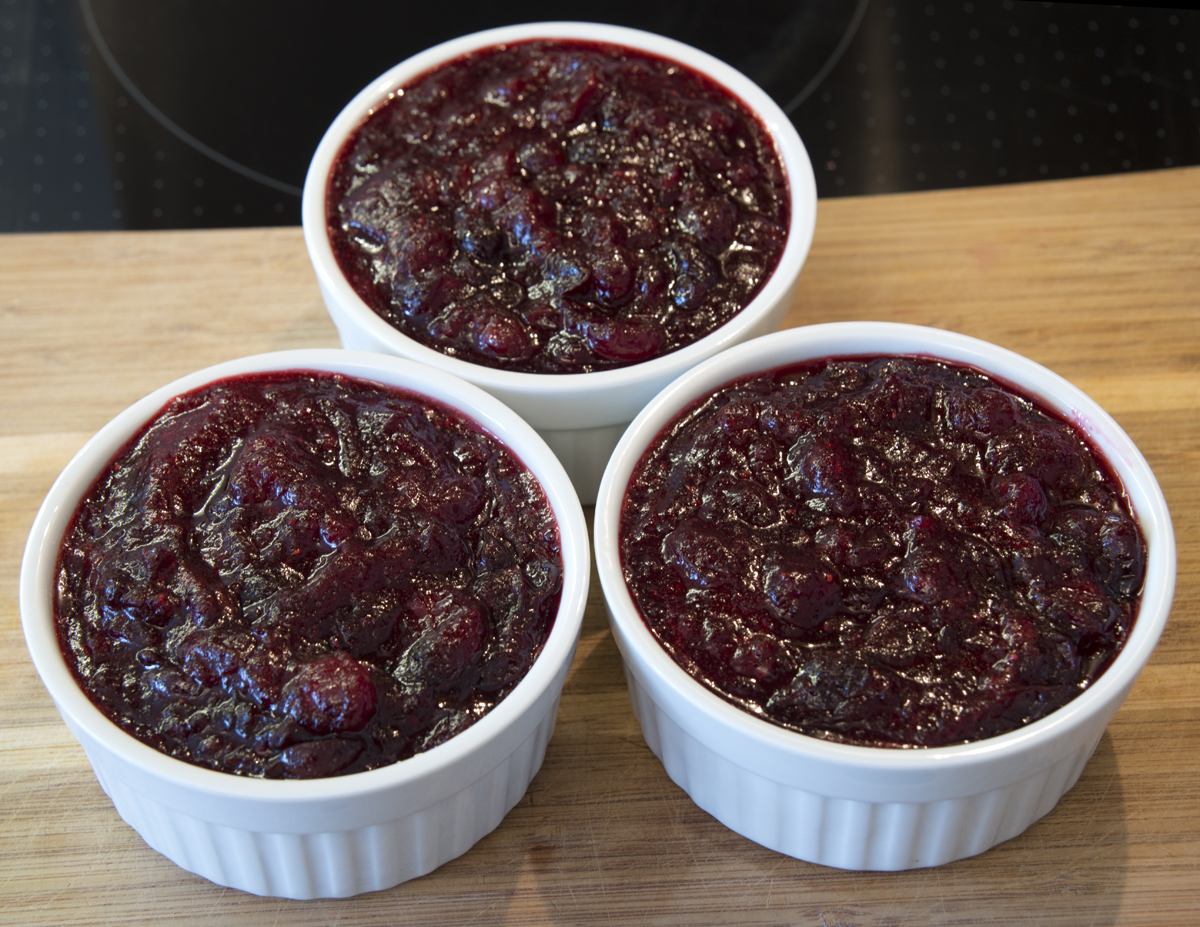 I used Alton Brown’s recipe, which takes about half an hour, sets up wonderfully and has only 4 ingredients. Plus it’s good to make ahead of time. I would probably back off the amount of honey in the recipe next time because I like a more tangy cranberry sauce, but it was delicious.

I sprinkled chopped pecans on top just before serving, which reminds me: pecans are not easy to find most of the year here, either. Most of them are imported from the USA and are only available in October/November. Last year I saw very few. Luckily this year I found lots and lots, but I had no idea how long they’d be available in the supermarket. I’ve been stockpiling them since the beginning of October! They are gone from the shelves now, though.

Another thing that is unavailable here is canned pumpkin, so I bought several small hokkaido pumpkins when they were available in September and October, roasted them in the oven and saved the cooked flesh in the freezer. I was wise to stockpile pecans and pumpkin – I made pumpkin and pecan pies on Friday.

And, (I’m getting tired of saying this) you can’t find frozen pie shells here, so I had to learn to make my own pie crusts. I’d been wanting to try it for a while anyway, and this was a perfect opportunity. I used a recipe from my Cooks Illustrated cookbook and they really turned out well. I’d bought some cookie cutters shaped like fall leaves and used them to make the cutouts that decorated the top of my pumpkin pies. 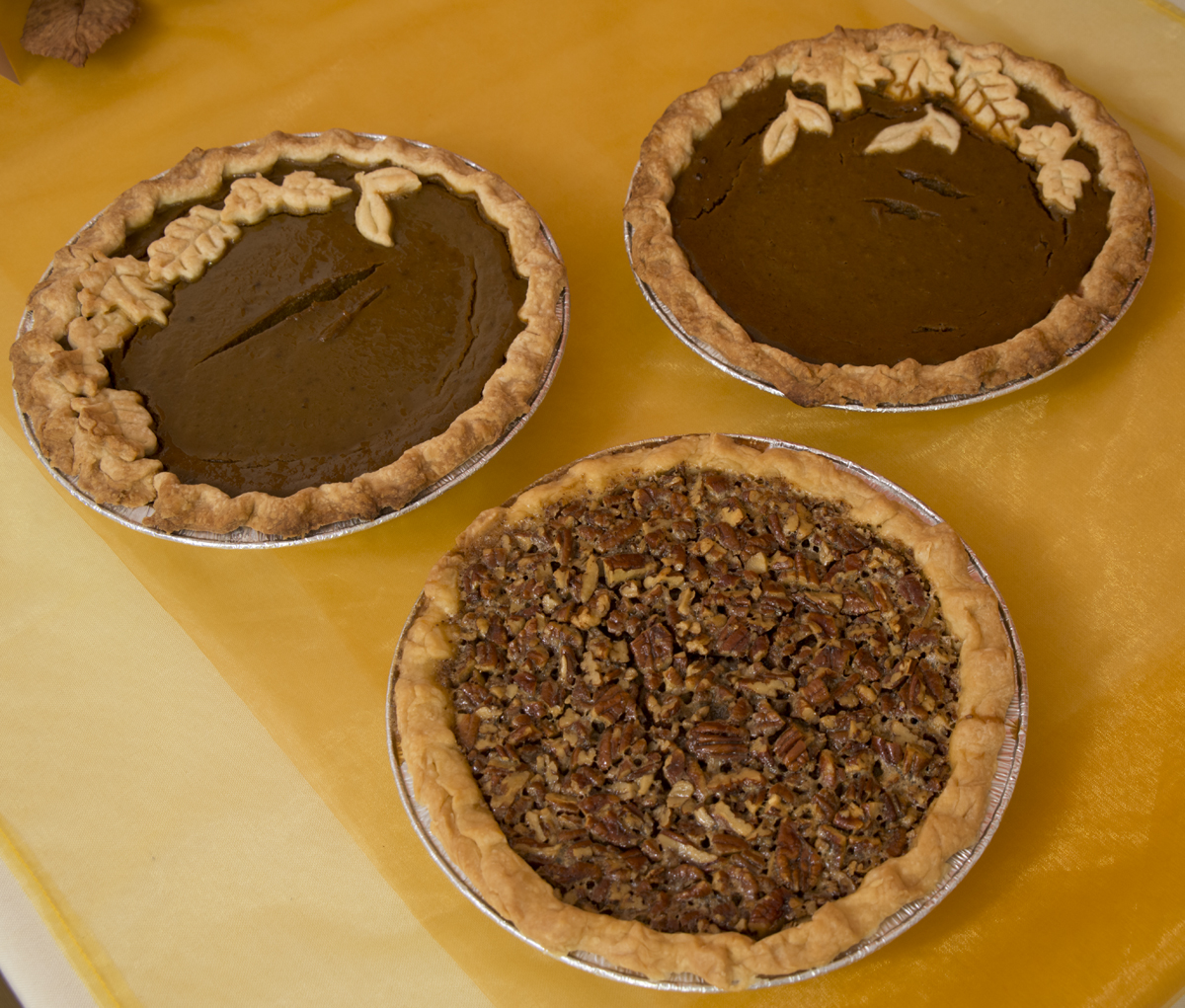 I used my mother’s pumpkin pie recipe, which was the first time in five years I actually had the recipe with me on Thanksgiving. I attempted other recipes here in Germany, but they weren’t quite right. This year I finally nailed it! Did I mention you can’t find brown sugar here and I had to make my own?

The recipe for the pecan pie was from my Cook’s Illustrated book, too. It had to be because (all together now) you can’t find Karo syrup on the shelves here. This recipe uses maple syrup instead of Karo and the pie isn’t so tooth-achingly sweet. More of the pecan flavor comes through. It was truly a wonderful pie!

Also on Friday I made American dinner rolls from another recipe in Cook’s Illustrated. They are quasi-brioche, light and delicate. They rise in the fridge overnight and are a great make-ahead bread. I wanted to serve dinner rolls because the bread here at the local bakeries is all much crustier and heavier. These rolls turned out great, too!

Our guests arrived on Saturday bearing wine and other goodies for us. We had two Germans and an Aussie. The Spanish lass was terribly sick with the flu and couldn’t make it. However, she’s promised to cook Spanish food for us some evening and I’m looking forward to that.

To start our feast we served up a beautiful spinach salad with walnuts, cherry tomatoes and and sheep’s milk cheese in the lovely bowl I bought in Italy last year: 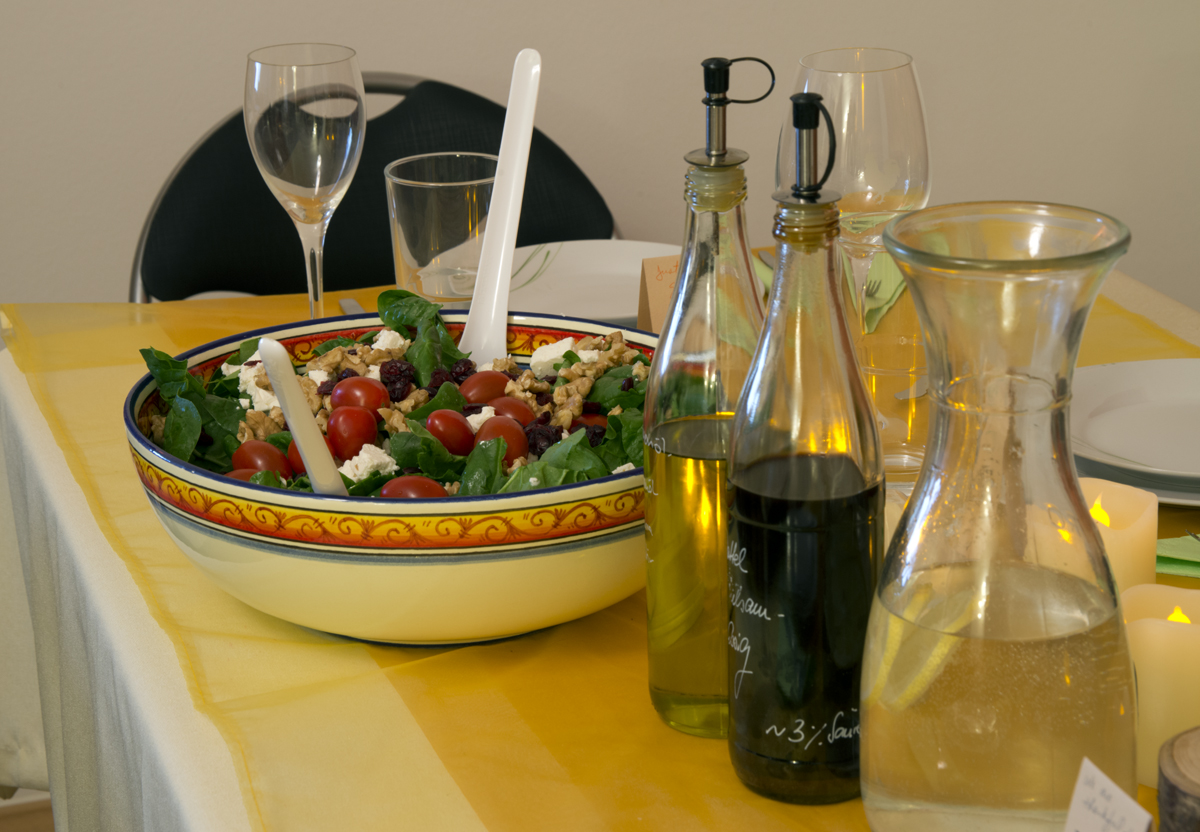 Fortunately you CAN find sweet potatoes here, and white potatoes. I made both of those on Saturday, as well as dressing, turkey gravy and a wonderful side dish of baby peas in a cream sauce with crispy fried leeks and bacon.

I don’t have any good pictures of the rest of the food – maybe I was busy, maybe I was tired, maybe I was drinking a lot of wine, or maybe a combination of all of those. But I did take a photo of the group wherein they were all giving me their “gang” signs – after my husband explained what “gang sign” meant! My favorite is the Vulcan gang sign: 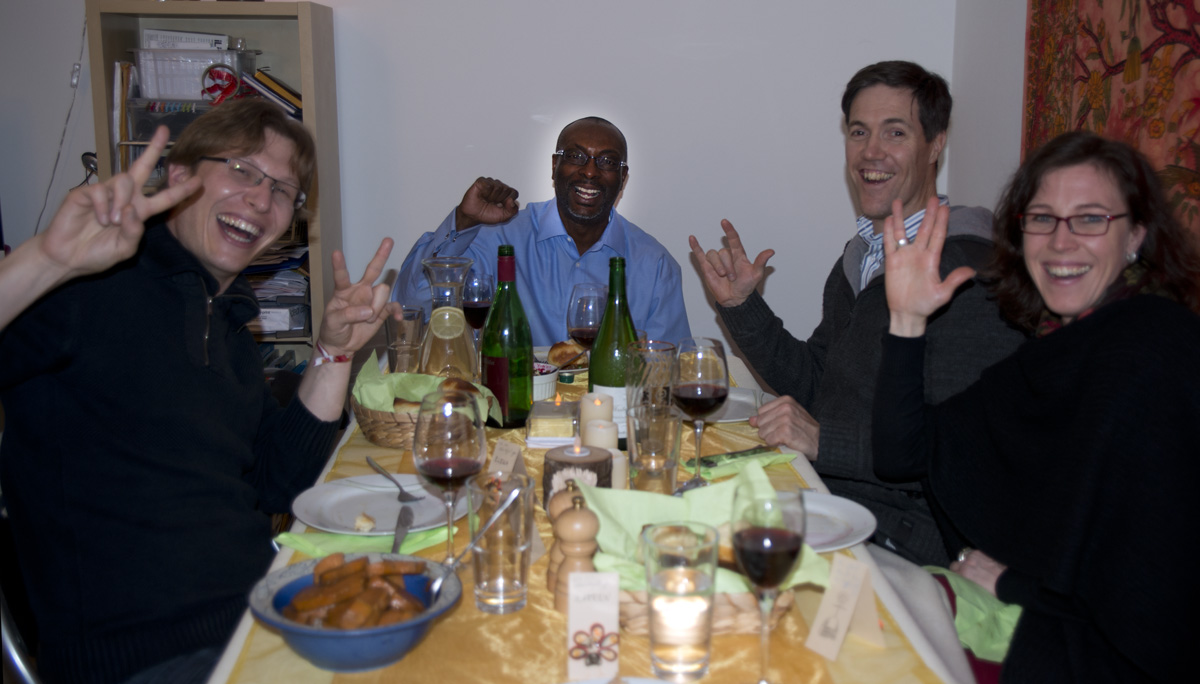 The guests seemed to really enjoy themselves and to appreciate how important Thanksgiving was to us. They were interested in the history of the holiday and eagerly participated in the “what I’m thankful for” speeches before dinner. Of course I’d made too much food with the specific intention of sending a lot of leftovers home with everyone. I’d told them in advance to expect that as part of the traditions. That plan worked, but we still had enough food to enjoy our own leftovers, too.

Now it’s full-on Christmas season here, which they call Advent in these parts. We’ve been visiting the many Christmas markets around town and plan to take the Christmas Market Tram tour before it’s all over. I hope it snows beforehand so the photos will be awesome – so far the low temps have hovered around the freezing point, but not really below it.

I’m sure I’ll keep you posted! 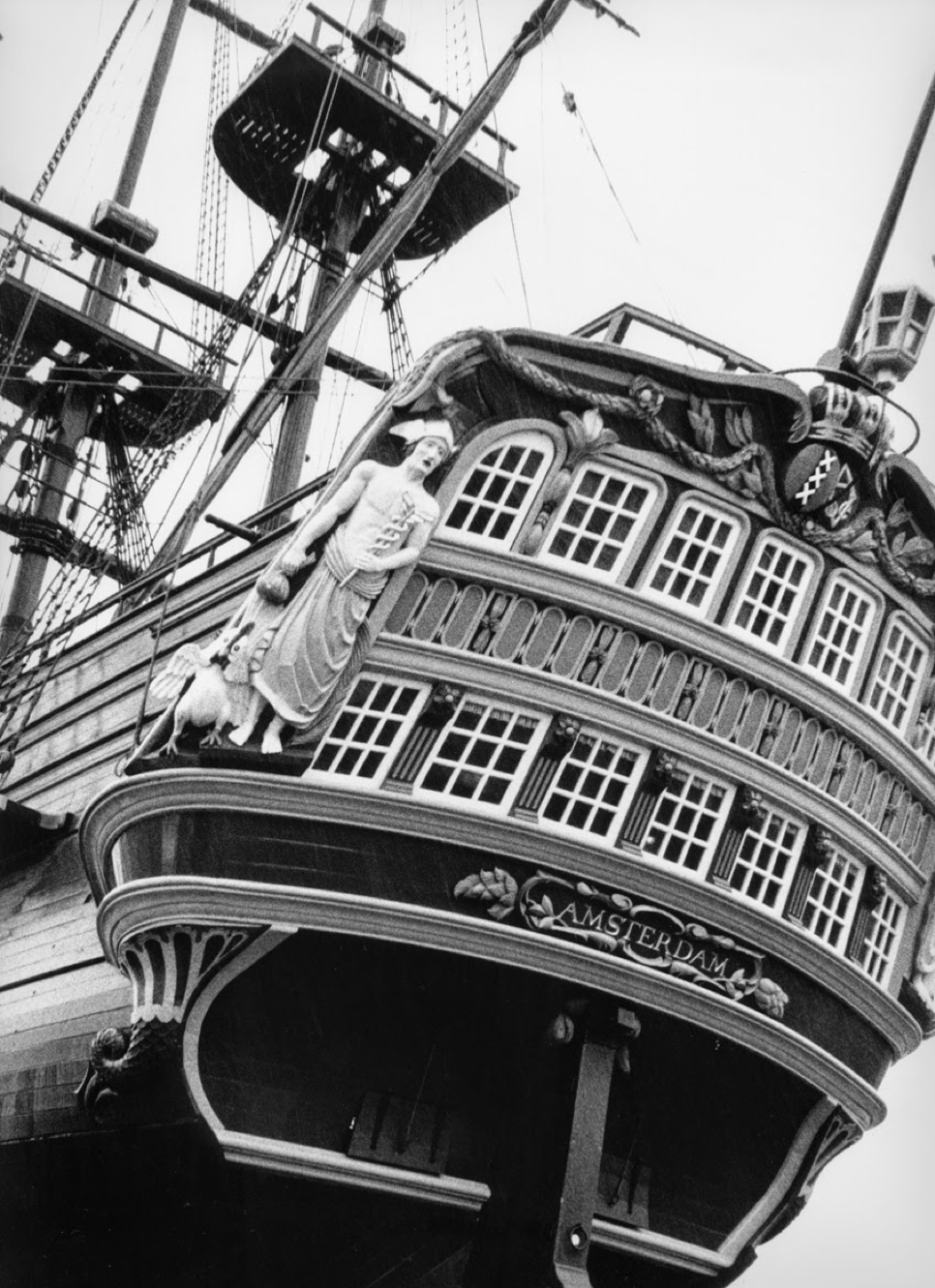