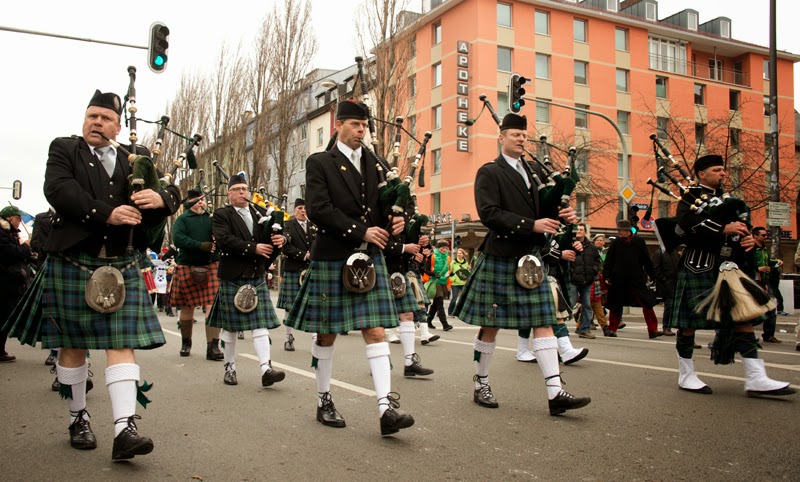 is now on (virtual) shelves at Amazon – at last!

YOU know PFNAR: the photos at the end of each blog post – the pics are unrelated to the blog posts and have no explanation.

Where did I take the pictures? What on earth motivated me to take and post them?

Did you know? THIS BOOK IS A PART OF A SERIES – DO YOU HAVE THEM ALL?

Who knew that Munich had such a large Irish population? Or at least those who turn Irish only on St. Patrick’s Day (you know who you are!) But here we are.

My husband saw mention of a St. Patrick’s Day parade online scheduled for last Sunday. So we thought we’d check it out. I was in for a surprise.

We arrived at the starting point just before the parade to find a bagpipe ensemble practicing at the subway stop at Münchner Freiheit, a trendy, fun neighborhood. 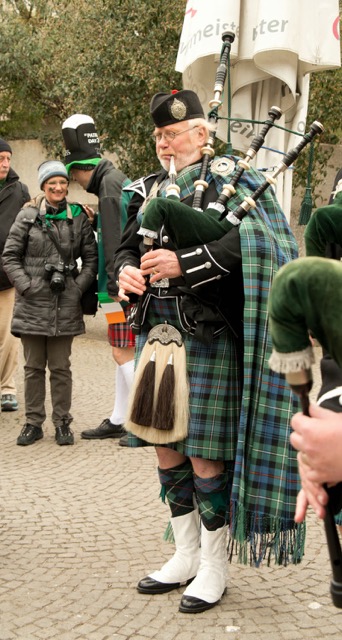 Say what you will about the actual sound, I find bagpipes fascinating. Therefore, I shot lots of the dozen or so musicians in their kilted finery.

We made our way down the street a few minutes before the parade started because I wanted to stake out a good spot for photos. Glad I did!

St. Patrick himself, looking like the cat that swallowed the canary maybe because of those bodyguards, led it off. Didn’t see snake one. 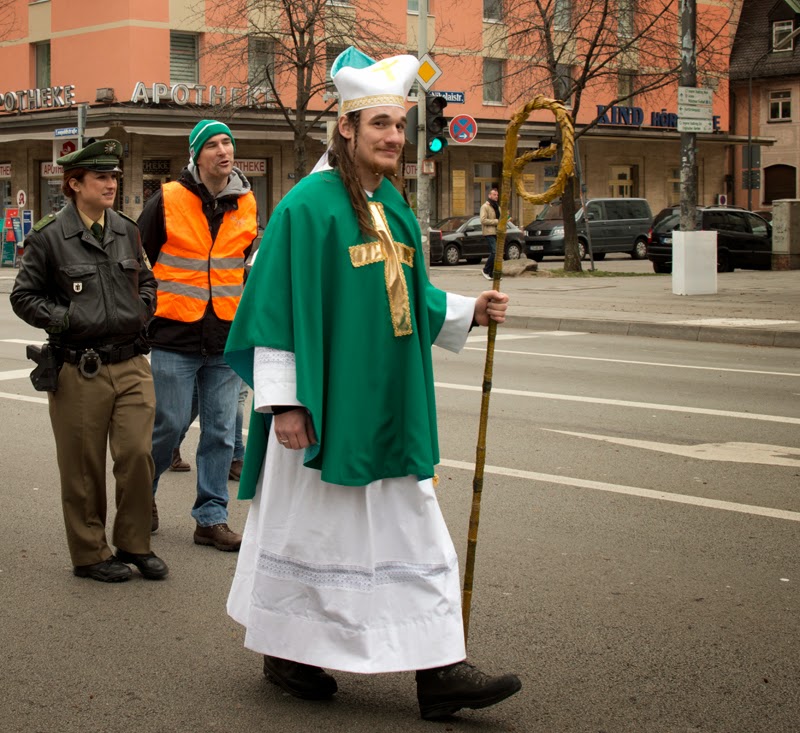 There were contingents of soldiers from various points in history: 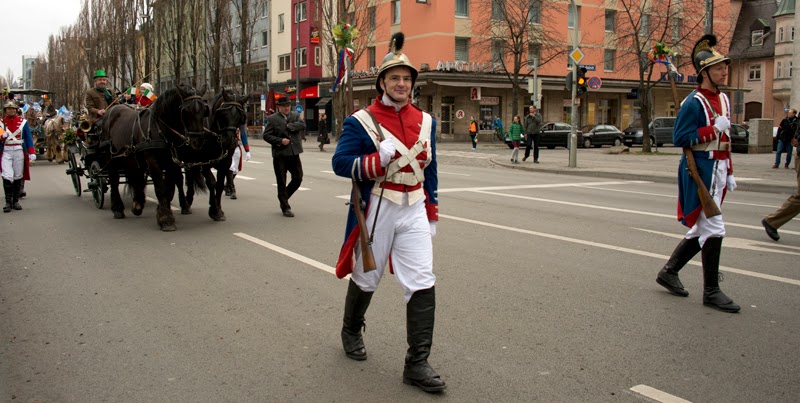 Hofbräu was represented, the beermakers to which whose famous Hofbräuhaus many tourists flock in Munich. I’ve been guilty of a little flocking in my turn. I LOVE the ornamentation on their horses. They always show up decked to the gills. They even jingle. 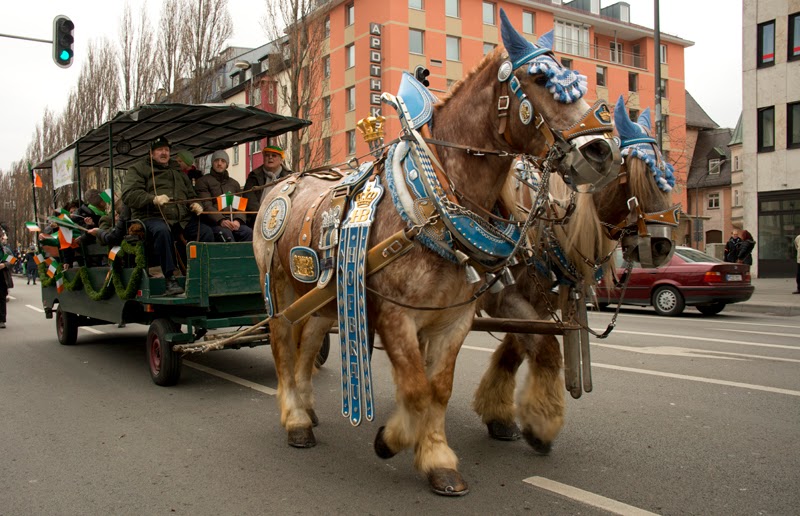 Of course those Dubliners in Guinness guises were part of the festivities. 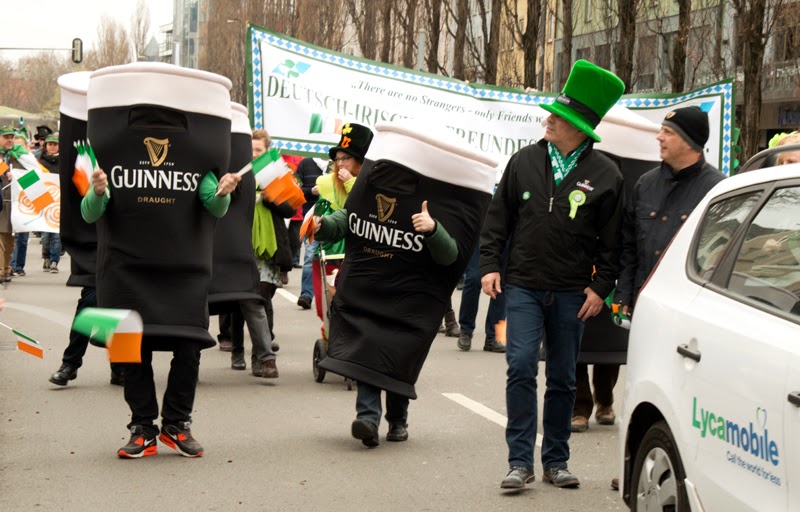 My bagpipers came along presently. They are called the Claymore Pipes and Drums. 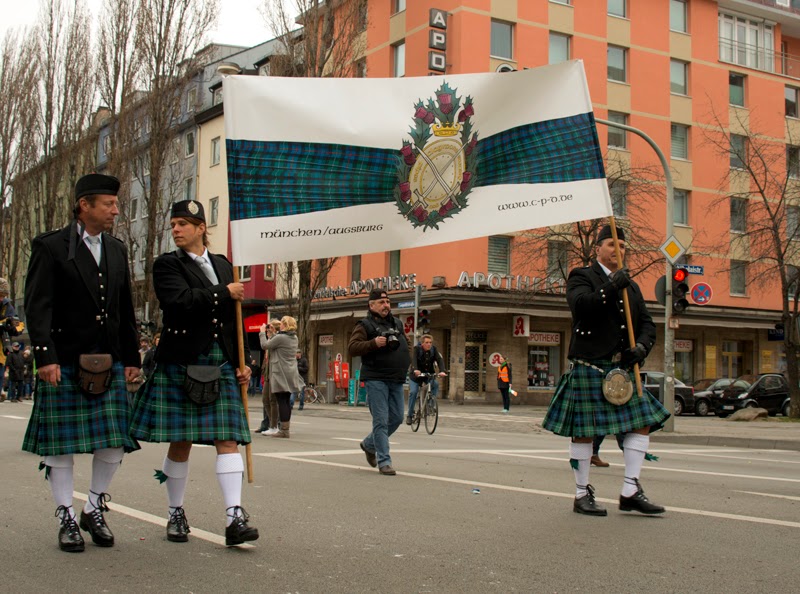 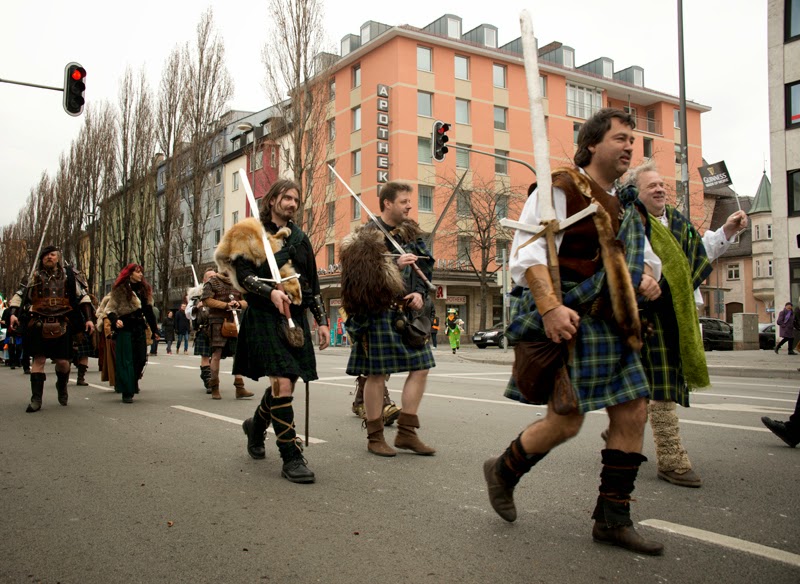 For the record, she didn’t protest all that much… 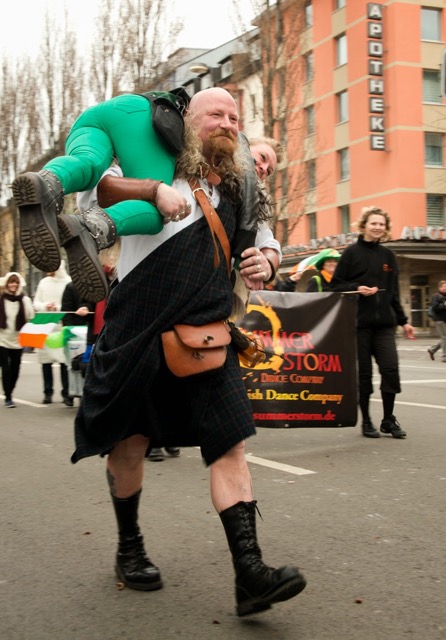 Several marching bands paraded by. I liked the silver bell thingy instead of a flag for this crew: 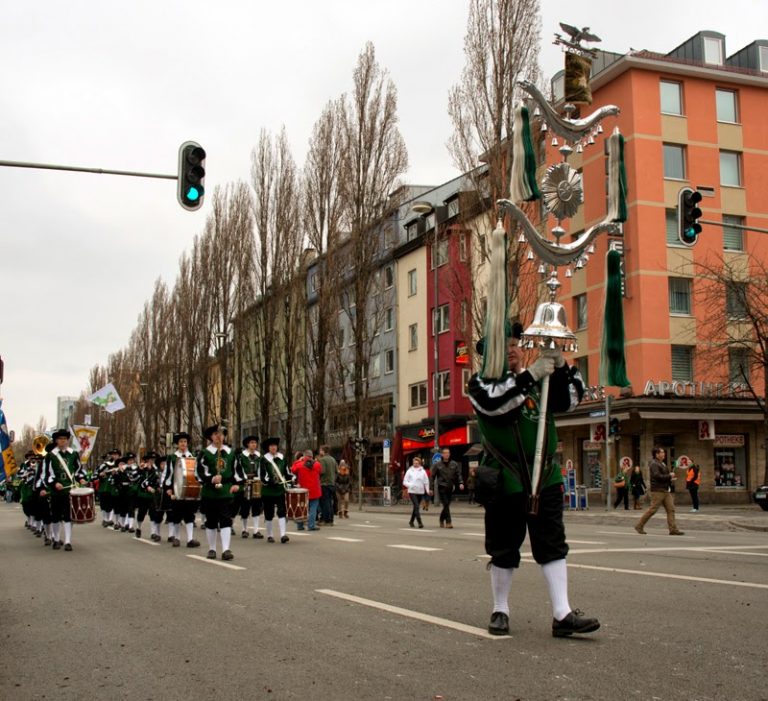 The hugest flag award went to this guy: 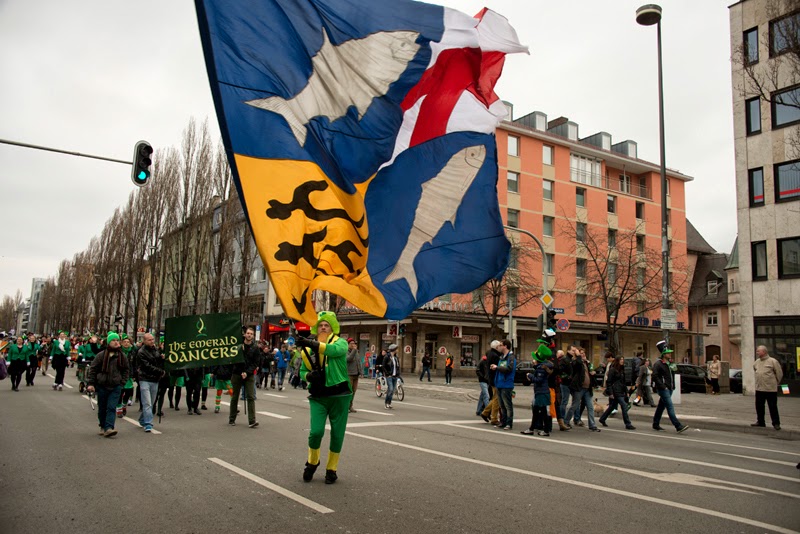 And, inexplicably, American Civil War soldiers from both the Union and Dixie were present and seemed to be getting along fine these days. The flag says “Massachusetts Volunteer Infantry Regiment.” 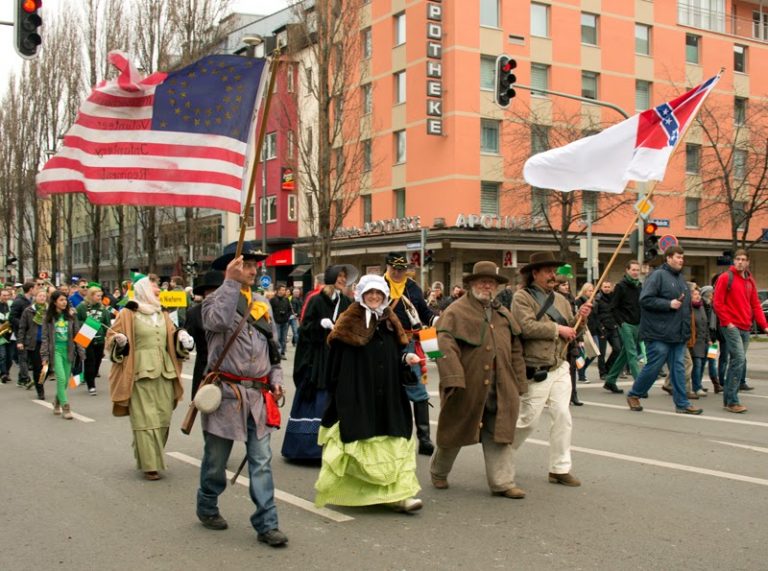 A pretty scary, armored guy came along and threatened the bystanders. His crew behind were backing him up with frightful yelling. 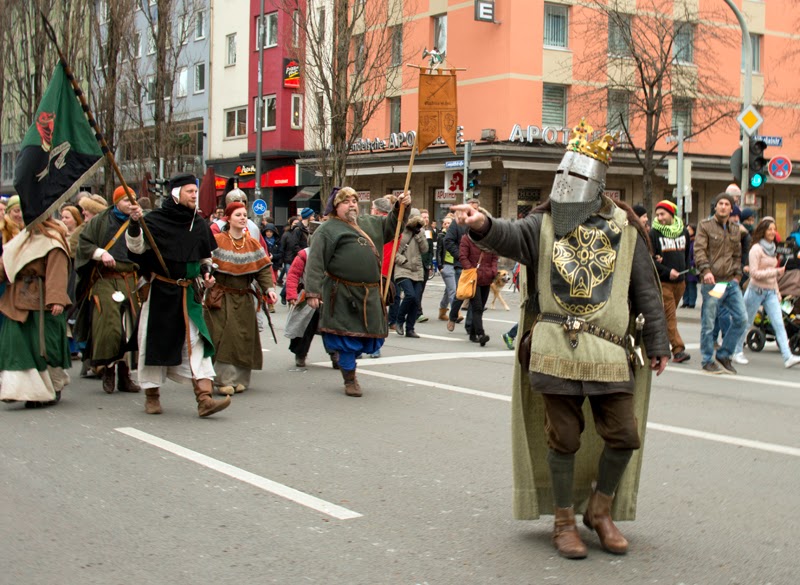 The drummers having the most fun award goes to these two: 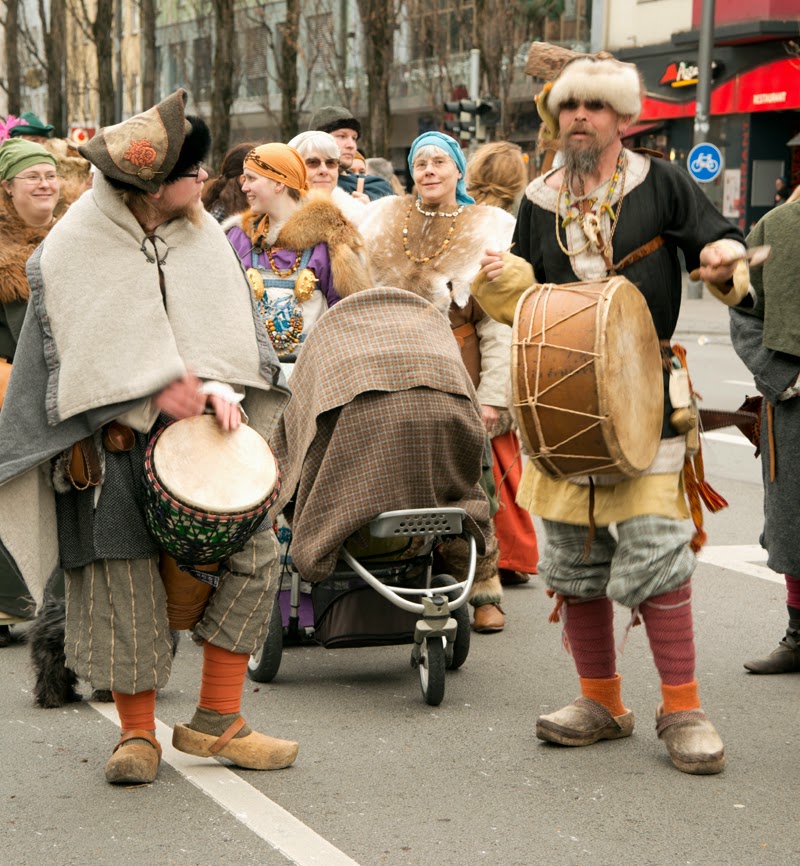 I’m … kinda… speechless at this one: 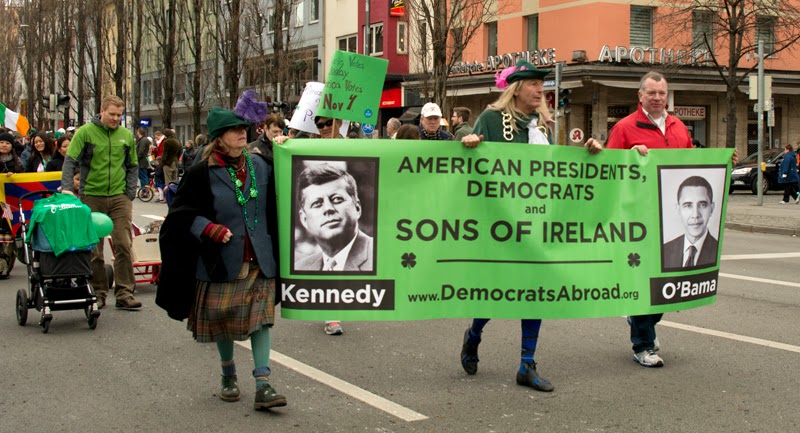 Bringing up the rear was a band in a wagon (a bandwagon?) with a green canopy playing Irish songs. A chap on the back of the wagon, looking VERY Irish, was inciting us to dance and clap. 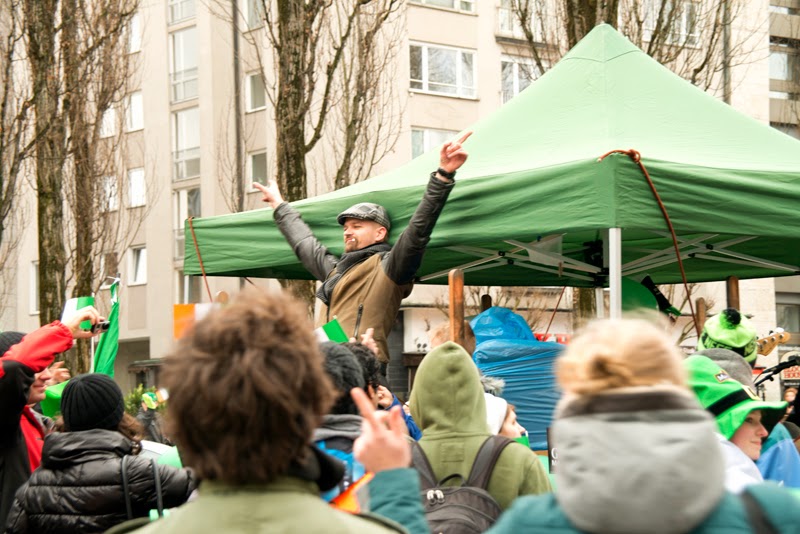 On the way we saw the review stand near the Siegestor, or Victory Gate, Munich’s version of the triumphal arch like the Brandenberg Gate in Berlin or the Arc de Triomphe in Paris. I dig that they used lions instead of horses in the statue.

The parade review stand is the very small, canopied wagon beyond the horse and carriage in this photo. The parade was passing between the carriage and the review stand and through the gate: 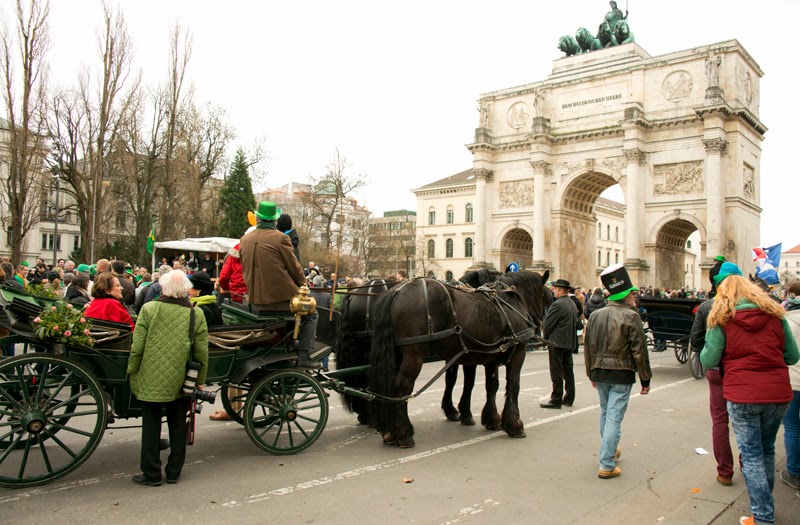 The parade ended at Odeonsplatz, the former central square of the city. As an aside, Hitler made a play to take over the city here and was prevented. Not recently, though.

Odeonsplatz is just beside the palace gardens, which make for a nice stroll on a sunny day. This day, however, was not so sunny, but the Guinness stands made up for it. You can get a sense of the crowd from this shot of the “line” we were standing in: 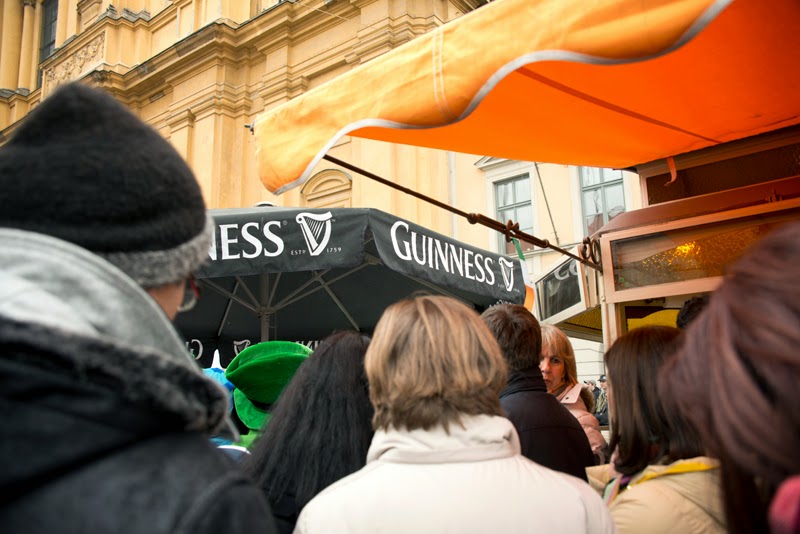 A little patience paid off, however. My husband (looking very Irish himself) and I enjoyed our freshly tapped Guinness in our new beer glasses as we listened to the ensuing speeches from German Burgermeisters and Irish and American ambassadors and the like: 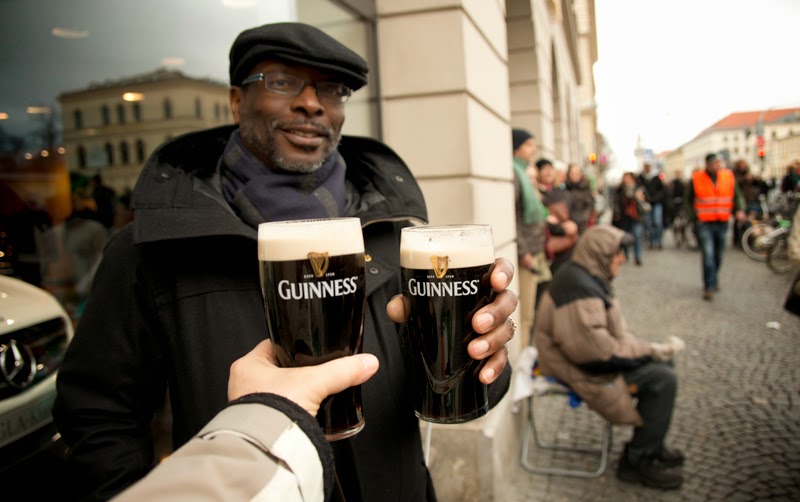 See how I tied international drink into this whole thing? Thanks for joining me on this travel for taste. Erin Go Bragh and see you here next week! 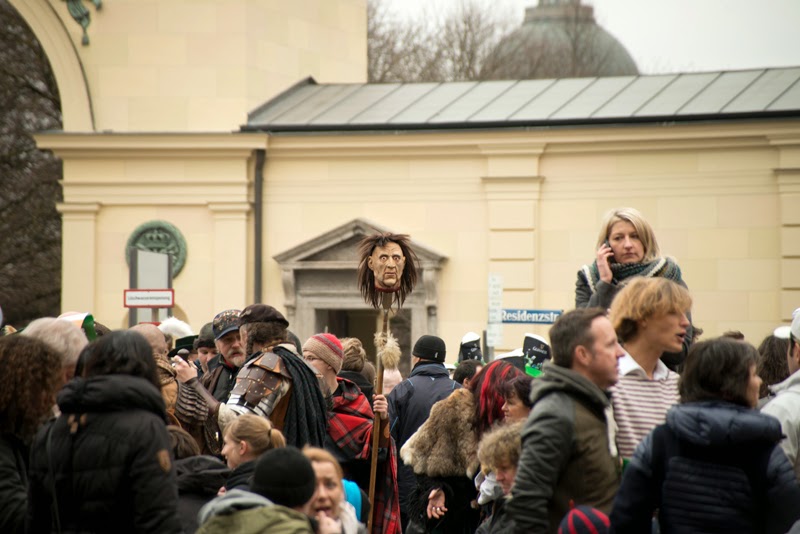