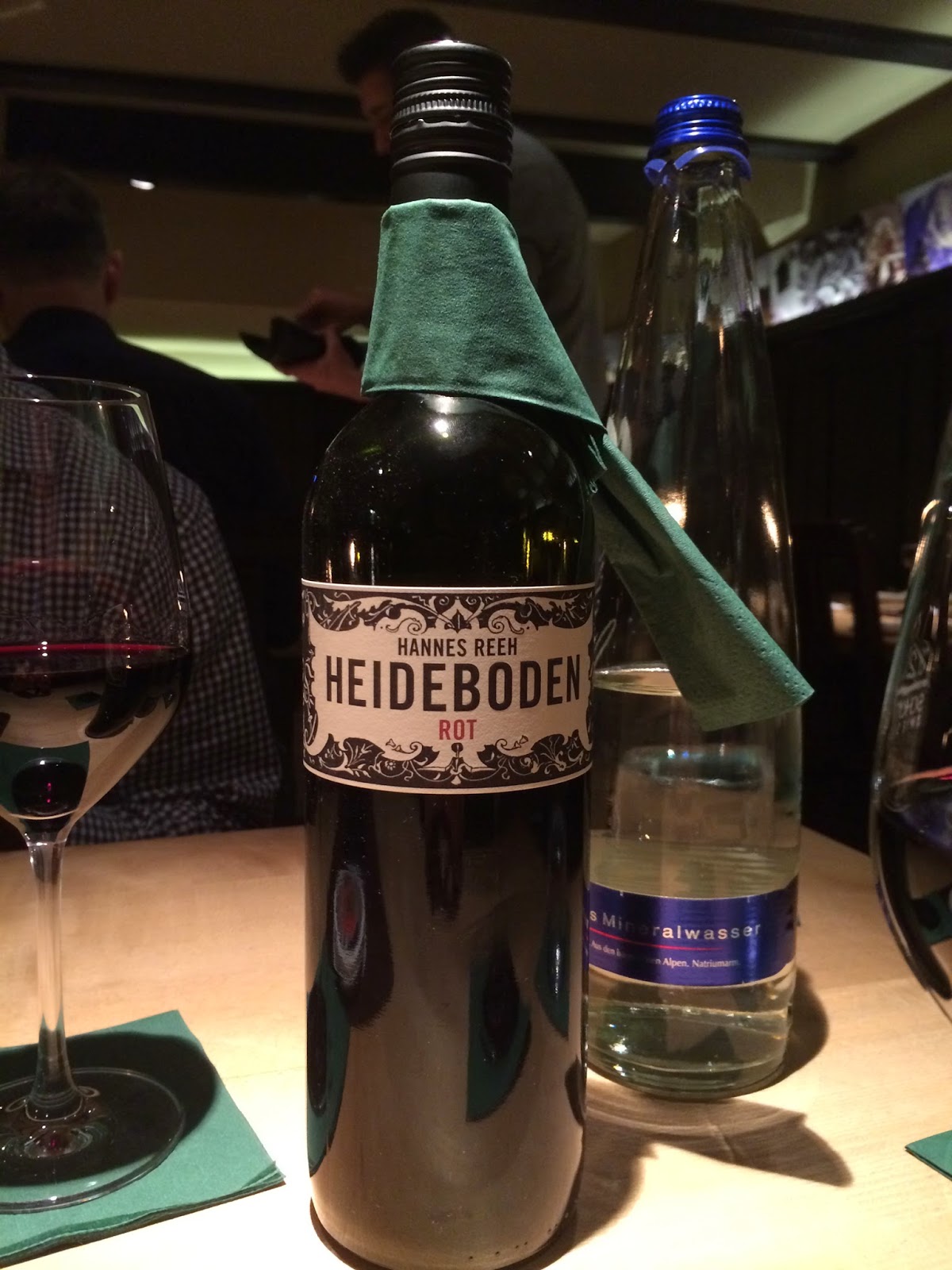 now available at Amazon! Did you know it’s PART OF A SERIES?

About a year ago while dining at one of our favorite haunts in Munich, Zur Brez’n (“The Pretzel”), my husband and I tried a red wine on the menu there. Its name was Heideboden from the Hannes Reeh winery in Austria. I’ve not been the same since! 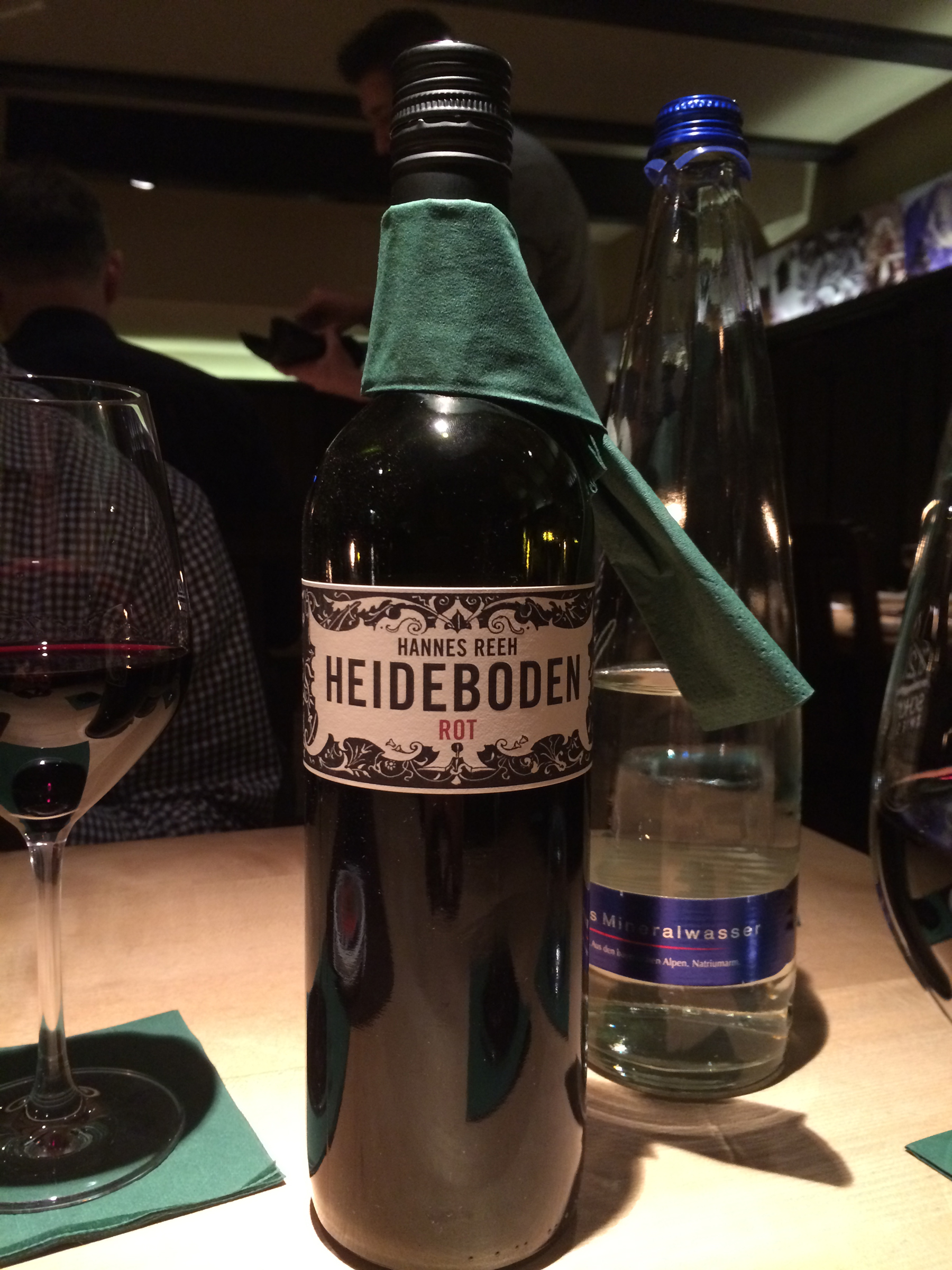 We visit Zur Brez’n often, and usually get the Breznsalat, which is a pile of fresh, beautiful salad with roasted duck, spiced apples and pretzel chips drizzled with balsamic cream: 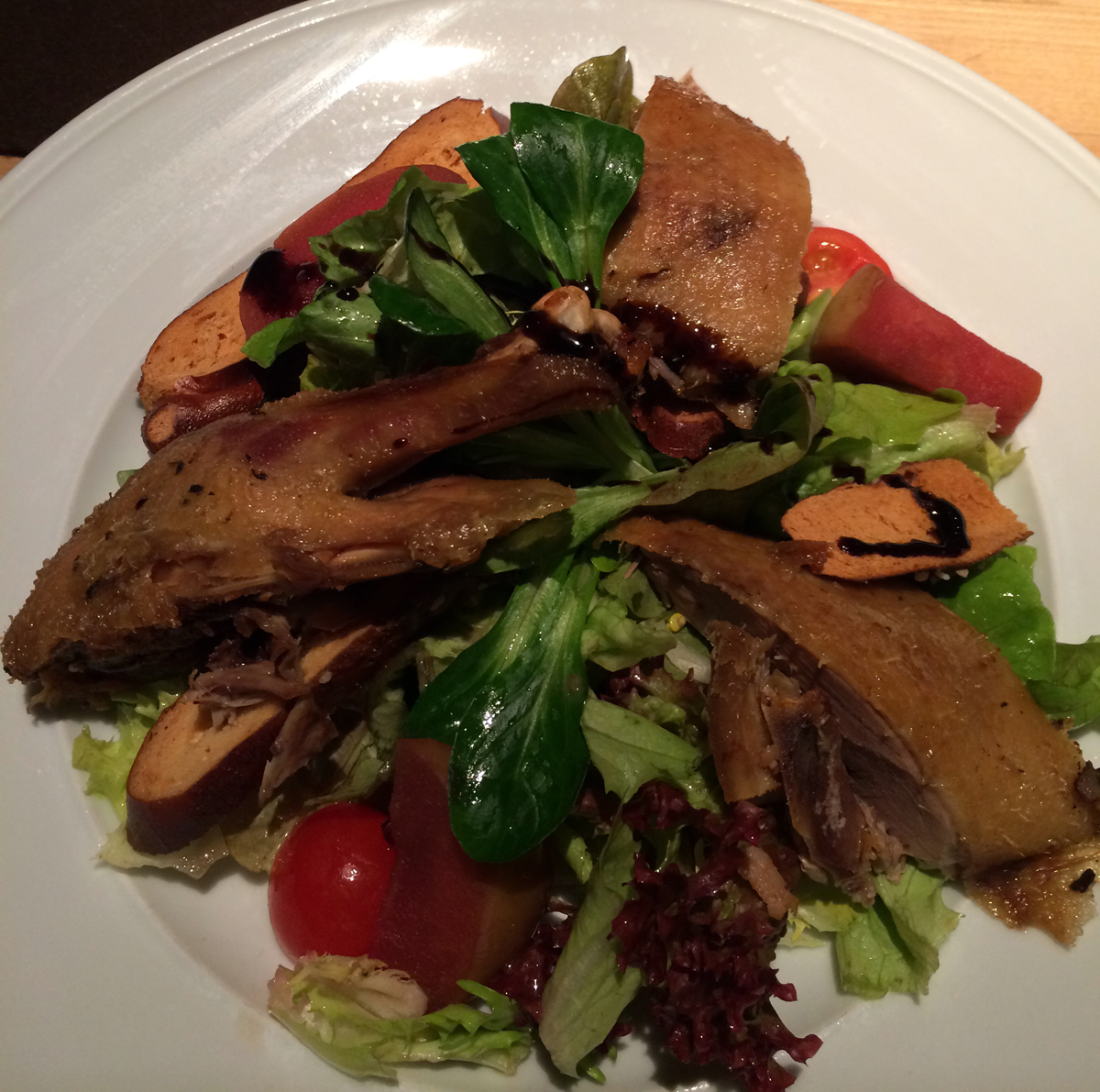 Of course I had to research that wonderful wine. The winery, Haanes Reeh, is named after its owner and vintner. He is a very young winemaker, only about 34 years old. He converted all the family farmland into vineyards around 2007 and has impressed the winemaking world ever since.

He produces only a handful of wines, but all of them get rave reviews. My favorite (so far) is, of course, the Heideboden Rot. The Heideboden, which means “heather ground”, is a winegrowing region in eastern Austria near Hungary. Although it’s a flat region near a large lake, which normally wouldn’t be suited for growing vines, the Heideboden has a gravel and sand substrate, which allows for excellent drainage. The lakeside location provides other climactic qualities that benefit grape growers, too.

The Rot word in the wine’s label simply means “red”. There is also a white variety which I haven’t tried. Most intriguing is the name of his most popular variety, Unplugged. I have yet to try that, either, but I’ll keep you posted.

The Rot type is a blend of several kinds of red grapes grown in the Heideboden region. The largest percentage, about 60%, is the Zweigelt variety. It was created by Dr. Fritz Zweigelt in 1922 by cross-breeding St. Laurent and Blaufränkisch grapes, two types of vines indigenous to Austria. The resulting Zweigelt is more disease-resistant, has a higher yield, ripens earlier and is less sensitive to frost than either of its parents. Icing on the cake: it retained the best qualities of both.

Although Zweigelt is not very well known stateside, I’ve seen it and drank it in several blends over here, generally to good effect. I can also vouch for Blaufränkisch wine on its own; it is very good in its own right. Both it and Zweigelt are grown in the Heideboden, as is St. Laurent.

Hannes Reeh’s Heideboden Rot is not very expensive, about 12 Euros a bottle ($13.50) off the shelf. Plus I’m lucky that it’s not uncommon on restaurant menus around Munich. I have read that it is distributed in USA but I couldn’t track down exactly where you could find it. If you see it in the US or anywhere else, let me know.

Here’s the back label: 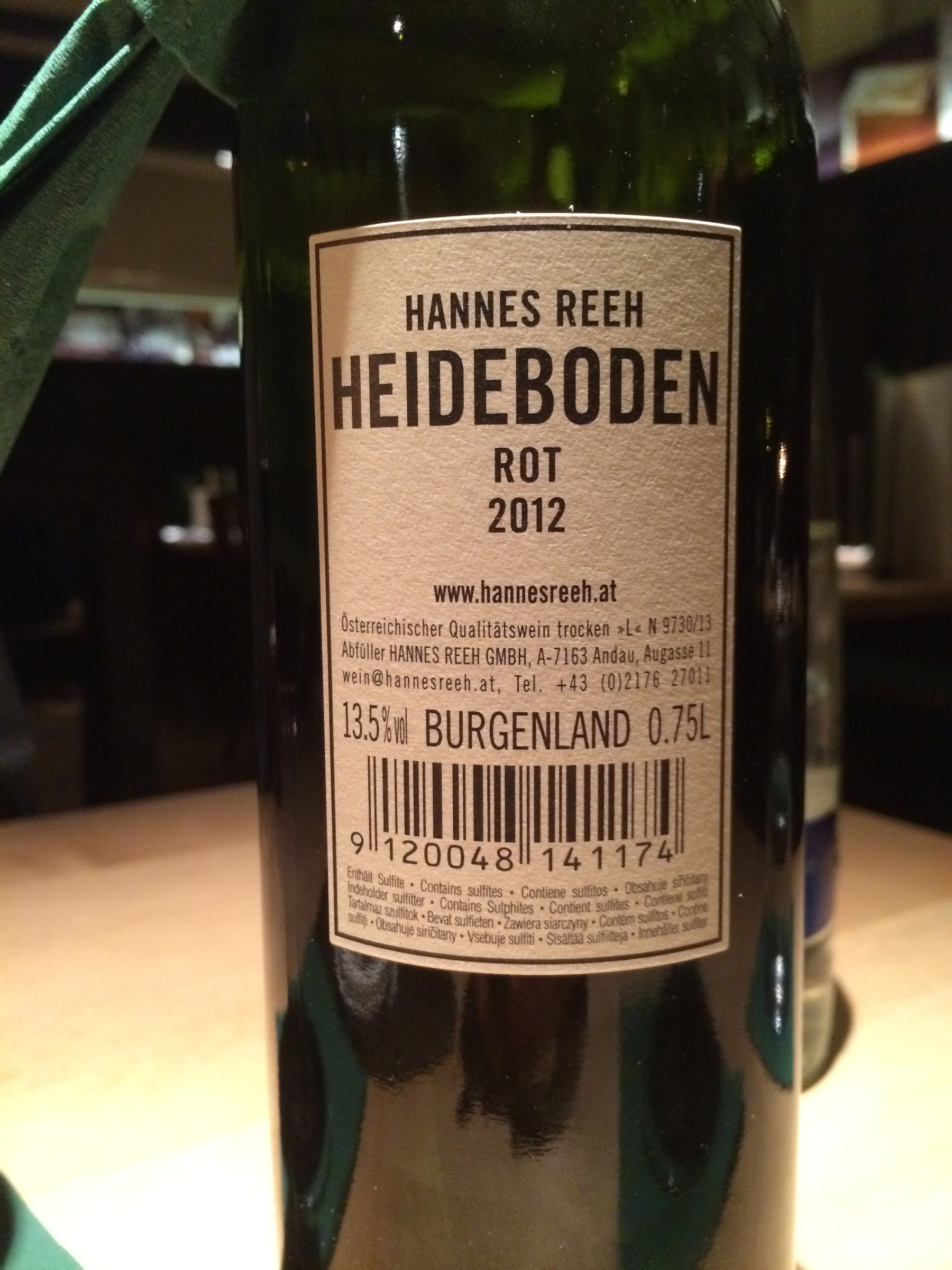 You can see it’s relatively high alcohol content for wine, 13.5%. In tracking down the terminology on the label, I also learned that Burgenland is one of the nine states of Austria. The winery is located in the town of Andau, Hannes Reeh’s hometown and location of the winery. Maybe I should plan a trip…

So, next time you’re perusing a wine shop, check for Hannes Reeh in the Austrian section. I bet you won’t be disappointed. 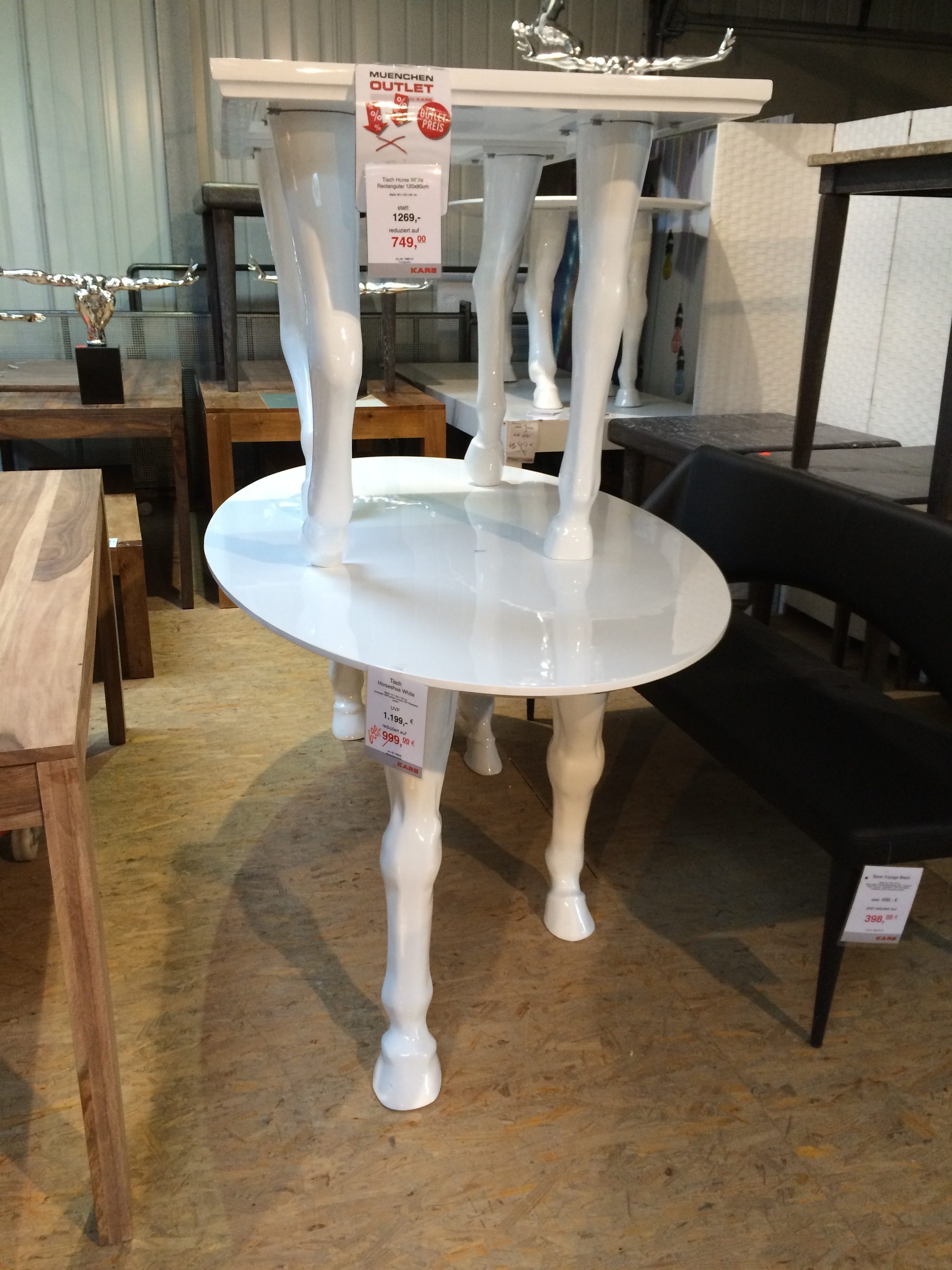