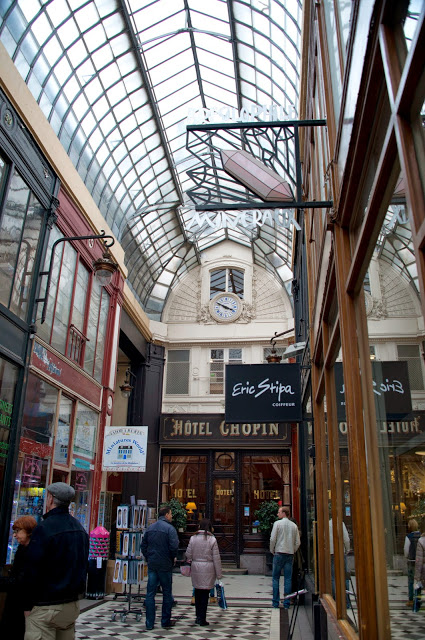 Do you have yours?

It makes a great gift for you, the photographer or the weirdly-humored in your life!

While you’re at it, COLLECT ALL FOUR PFNAR books – click here for the rest!

When my hopes to see Montmartre in Paris during my trip swirled down the drain into the famous sewers with a taunting, steady rain, we were faced with finding something to do on a rainy day in the City of Light.

Fortunately I found just the thing: les passages couverts, or covered passages. The passages, pronounced in French as rhyming with “massage”, were built during over a 60-year period in the late 1700s to mid-1800s. The passages are small city lanes with wonderful glassed roofs held in place with an iron framework.
In total, about 60 passages were built, but only about 15 of them survive. They were originally, and are still, private streets lined with shops, restaurants, museums and performance venues. On the floors above in these massive buildings are living quarters and office space. All of the passages have some official historical designation, such as a listing on the Historical Monument list, and recently the city of Paris has agreed to kick in some funds on the upkeep of these wonderful gems.
Judging from the photos I’ve seen of all the passages, I wouldn’t say the ones I saw were the most beautiful architecturally. But their listings sounded like the more interesting choices for shops. They certainly maintained their own character and I can’t wait to see the rest of passages on my next visit.
The first passage we examined was the Jouffroy Passage on Montmartre Boulevard. It’s 153 yards long and was opened in 1847. It was named after the owner of the company that owned the street. It was the first of the passages to be constructed entirely from iron and glass and was high-tech for the day. It’s rather plain in comparison to some of its sisters, but what charm!
The shops in the passage are reported to have items always of high quality, something not all the passages can claim (at least one had a brothel and gawd knows what else). The businesses here included cafés with billiards, milliners, tailors, hairdressers, laundrywomen, glove makers and so on.
Wouldn’t you just LOVE to stay in that hotel?

And check out the tile flooring. La Maison du Roy on the left is a fascinating little shop with hoards of cool chatchkes. I bought two beaded, tassled, fleur-de-lis drapery tiebacks there. 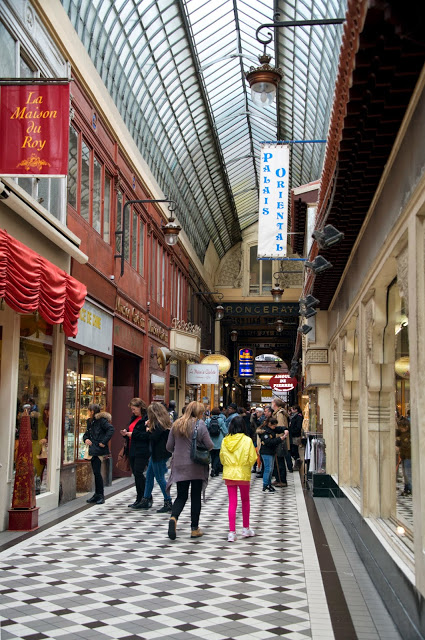 The Grévin Museum was first a dance hall, then a puppet theatre, then a café with live music, and finally the present wax museum. It’s been the neighborhood’s biggest attraction since 1882. I’m sad to report that I didn’t tour it, having been Louvre’d out the day before. Next time… 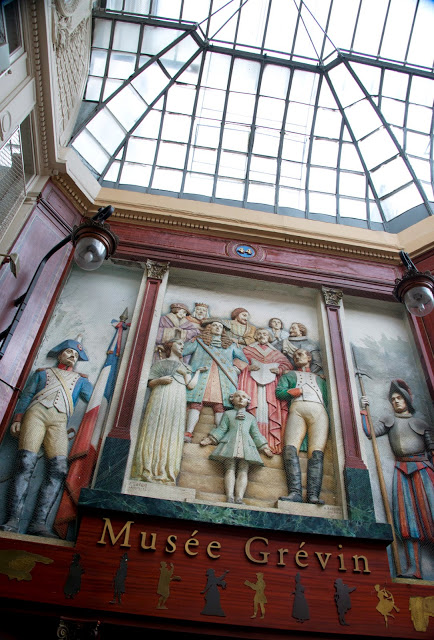 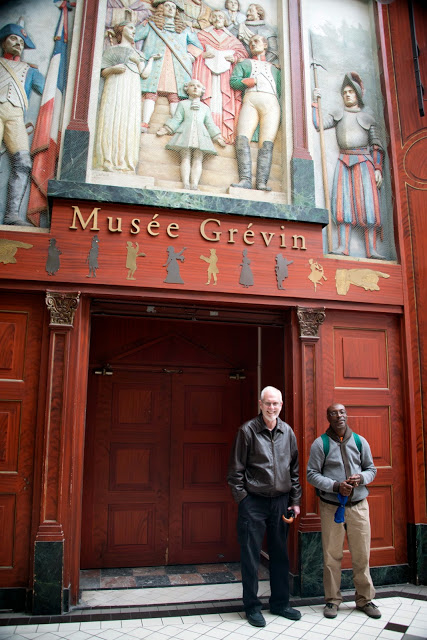 At the hotel at end of the passage it takes a sharp left and dog-legs right again to reveal more little shops with original facades: 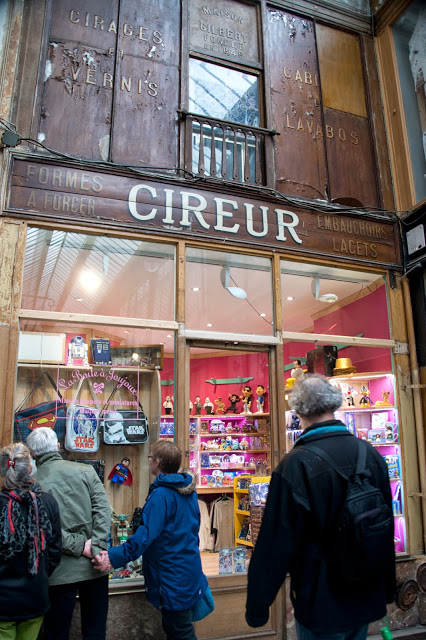 And an awesomely huge bookstore: 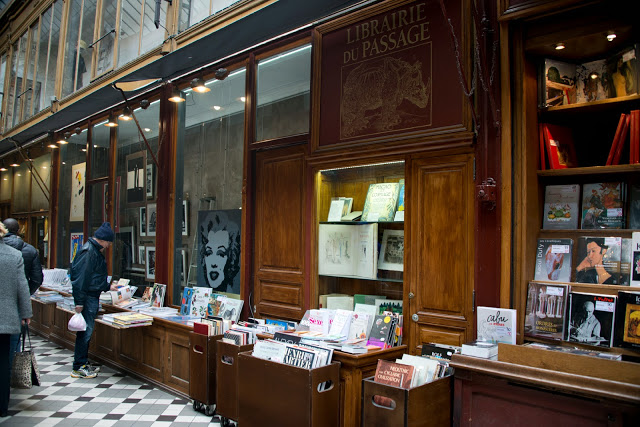 At the end of the Jouffroy is the Verdeau Passage. If you leave Jouffroy you flow right into Verdeau. In fact, it was part of the same architectural project as Jouffroy and named after one of the company’s main shareholders. 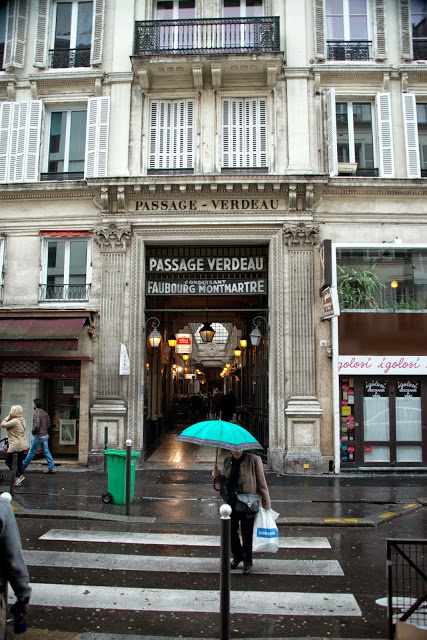 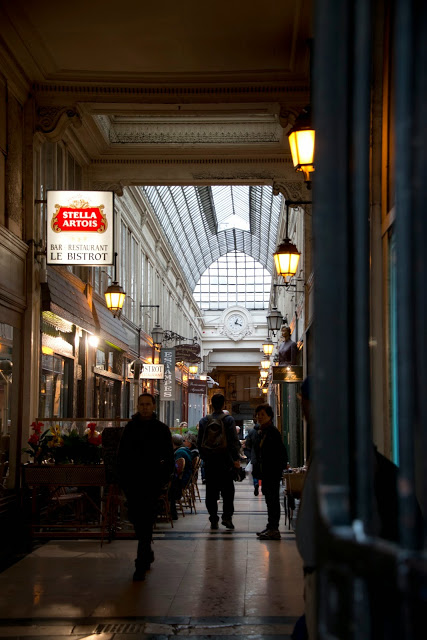 Cyndie and I went a little crazy in Le Bonheur des Dames, a needlework shop where we found cross-stitch patterns for kitchen samplers featuring chickens. However, at the end of a trip you’re not up to shelling out so much dough for cross-stitch kits. Of course, we now regret not buying them! 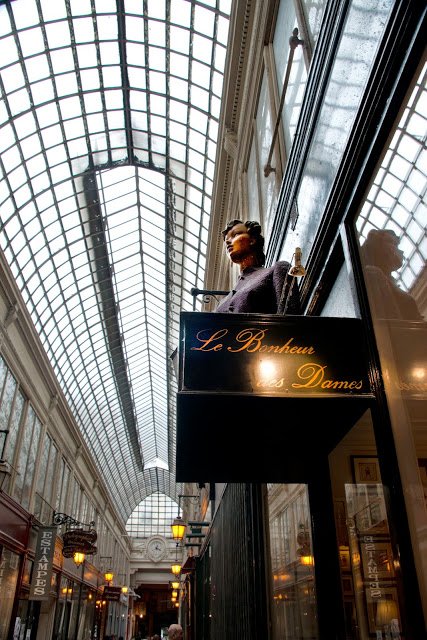 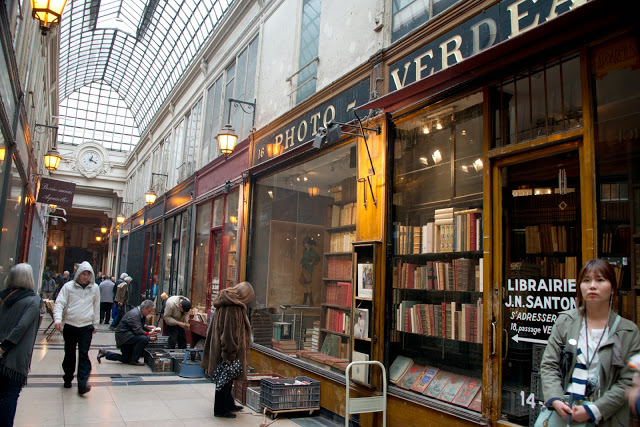 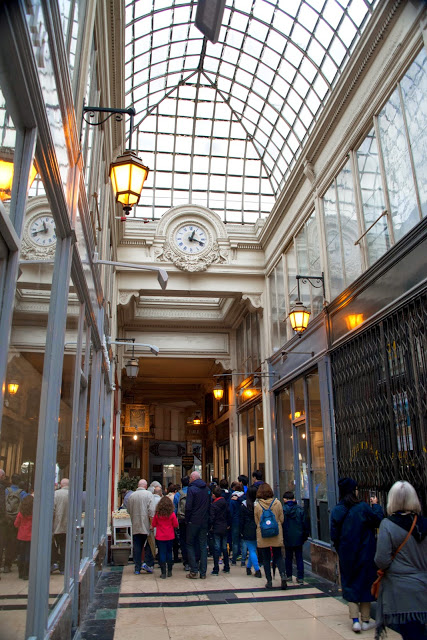 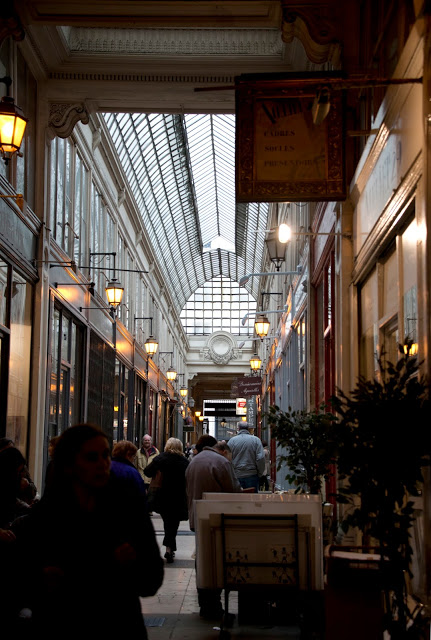 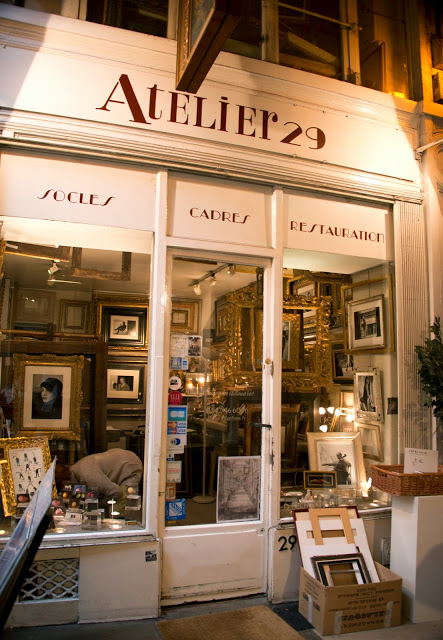 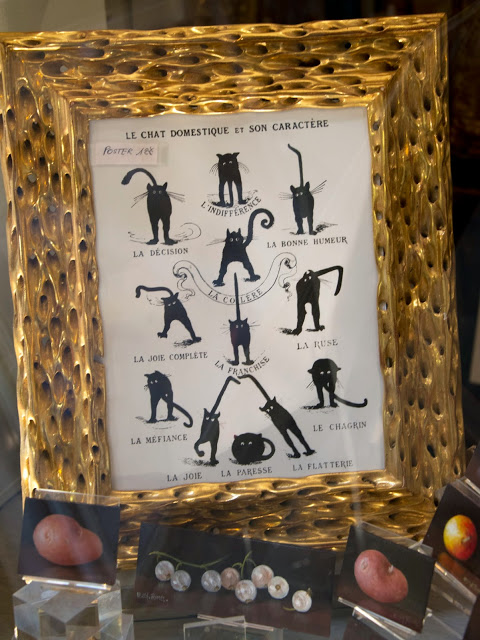 Not sure if the cats or the potato photographs intrigued me more!

I hope you enjoyed this little excursion in two of Paris’ passages. I really want to see the rest of them on my next visit there. If you go there, please let me know if you see any of them. I promise you’ll spend hours poking through the little shops! 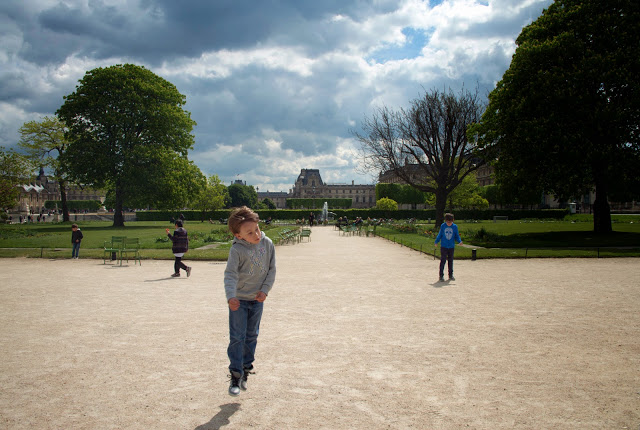