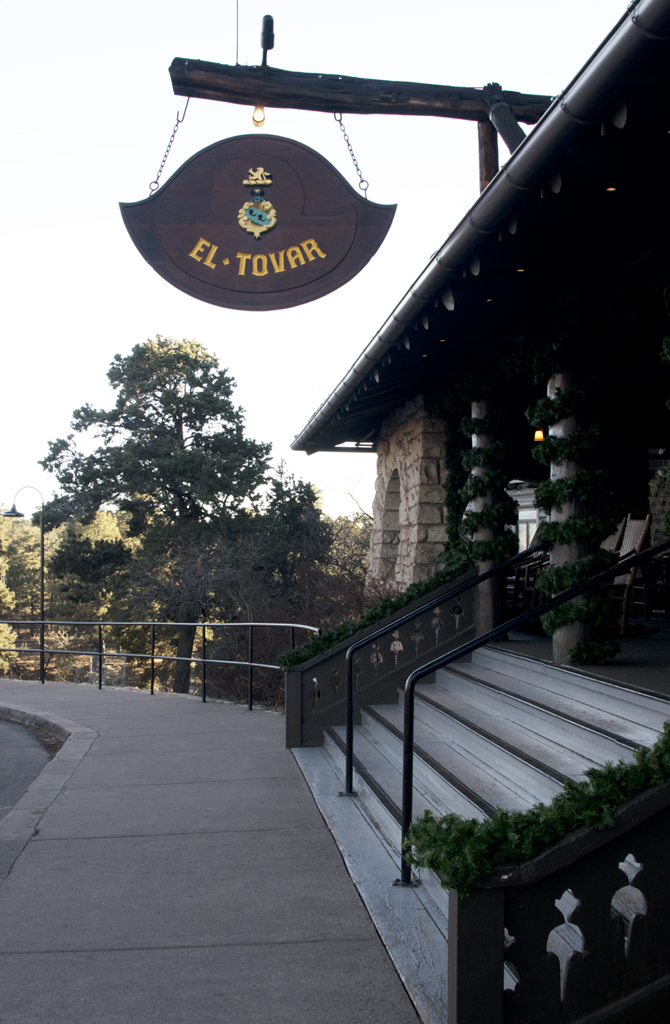 Last year I visited the South Rim of the Grand Canyon in December. While there, my husband and I also visited the historic El Tovar Hotel, which is located literally 20 feet from the South Rim! Here are two shots with dramatic late-afternoon sun on the canyon, El Tovar at my back: 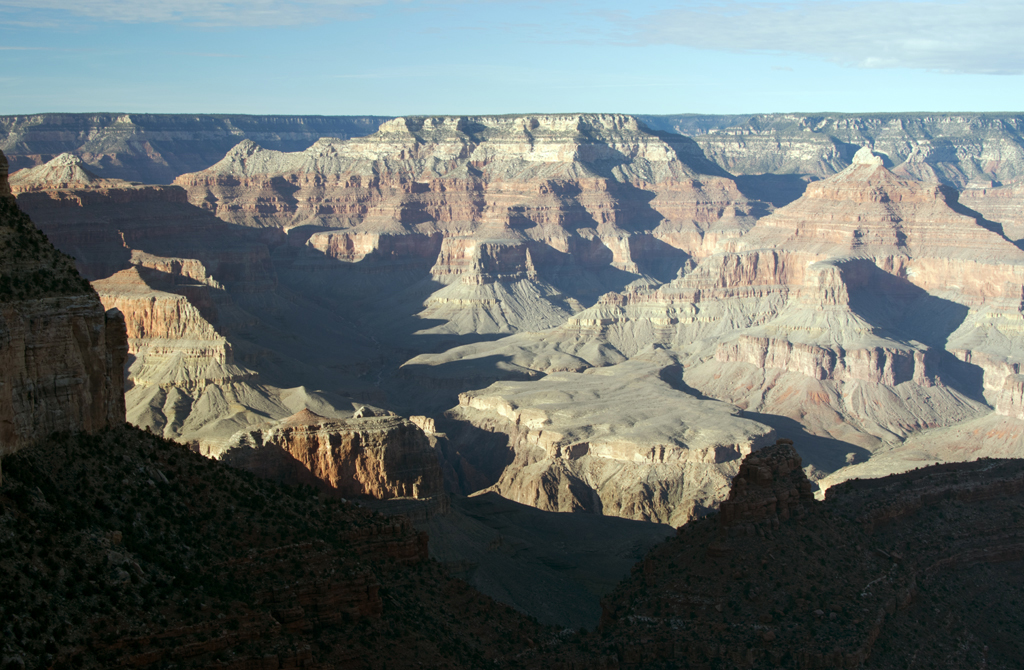 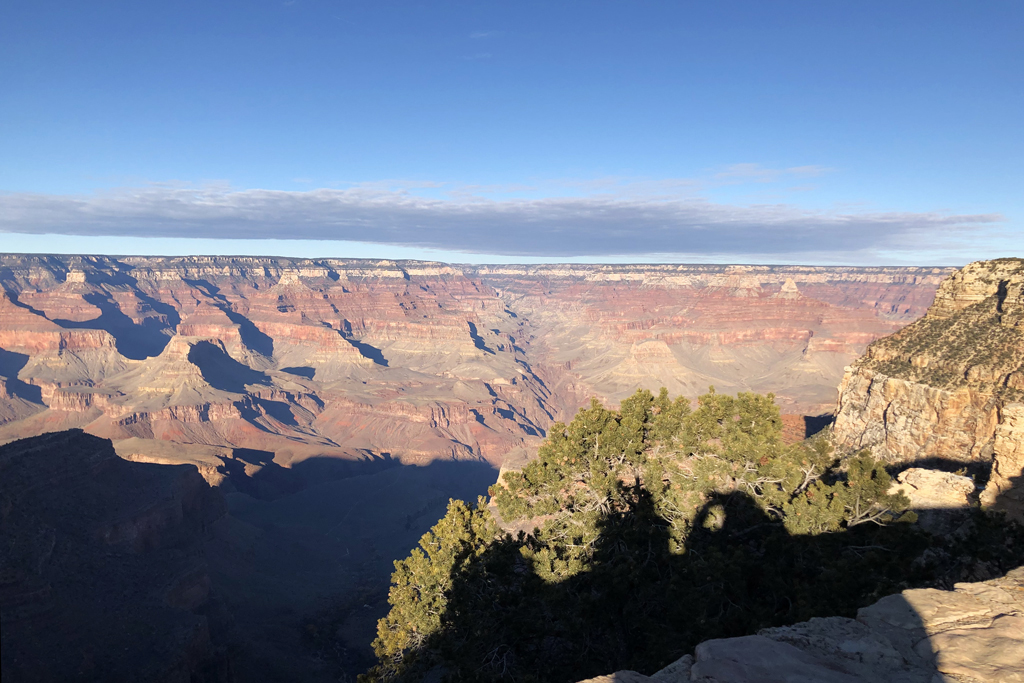 On the overlook at this point is a scenic locator: 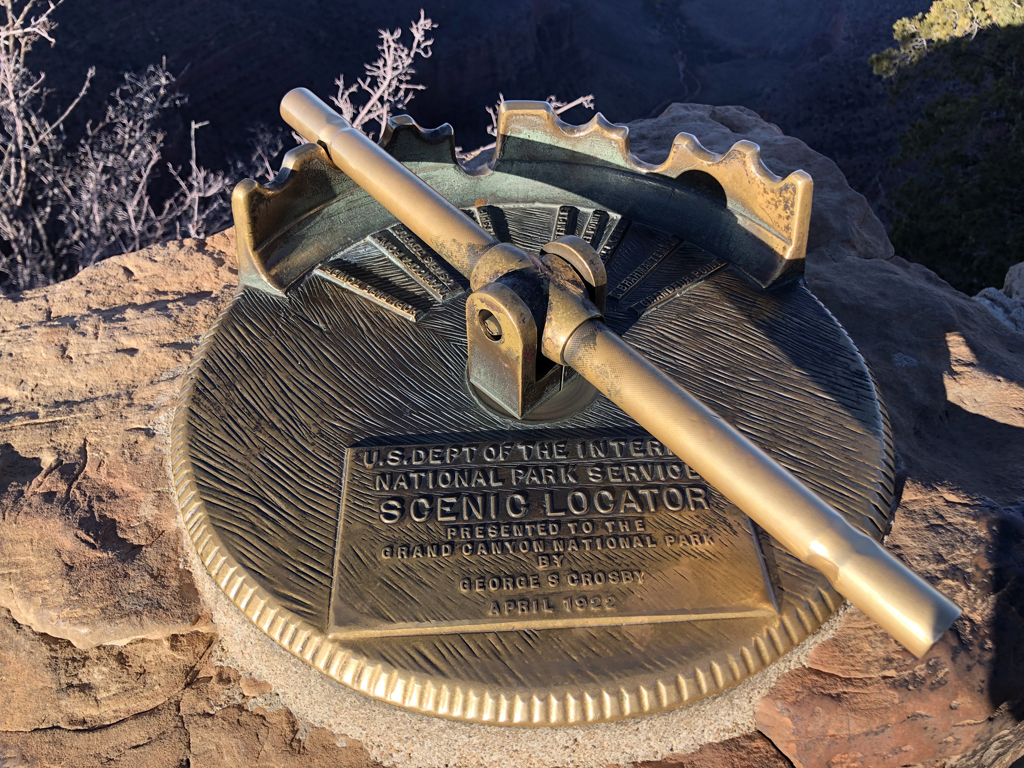 You can move the pipe to different notches and view specific scenes. The little bars of words on the far side of the disc tell you what they are: Hopi Fire Tower, Maricopa Point, Osiris Temple, Shiva Temple, The Battleship, Buddha Temple, Bright Angel Point, Brahma Temple and Grandeur Point.

El Tovar is a few minutes’ drive west from the visitor center where all the tourists go and where we stopped first, but I’d read about El Tovar and wanted to see it. I discovered that you should go there to stroll and hike if you want to avoid the crowds.

The hotel itself is quite impressive, especially considering it opened in 1905:

It was renovated in 2005 for its 100th birthday. Here you can see the original native stone base and Oregon pine log walls: 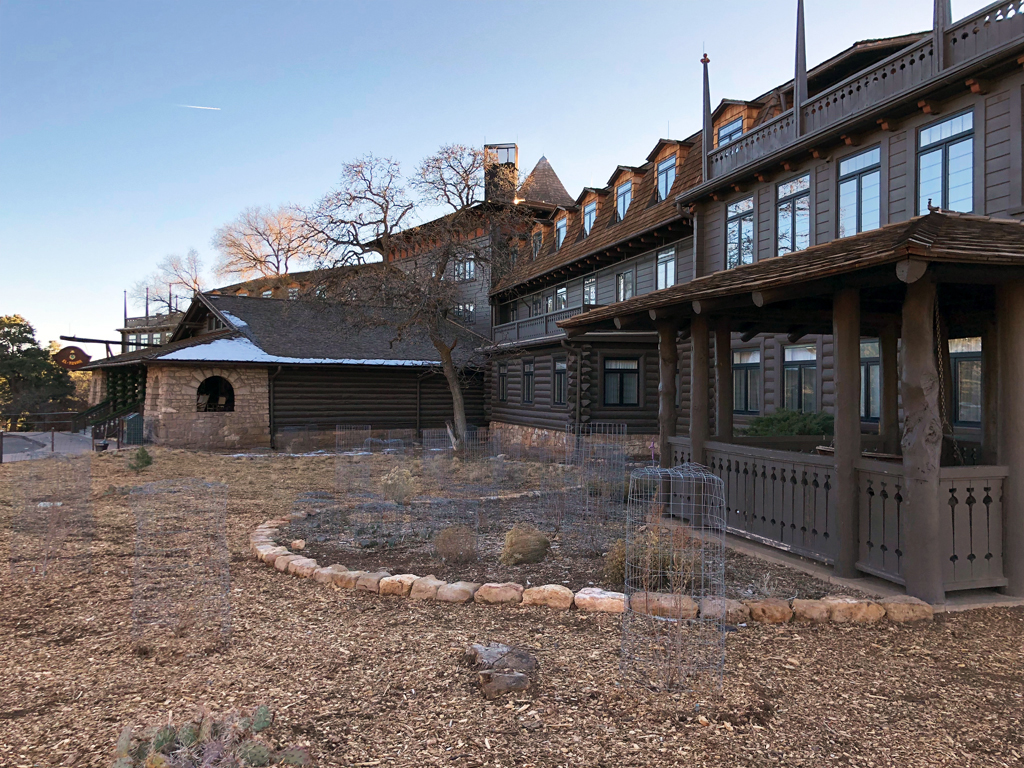 If you’re thinking that El Tovar looks vaguely familiar, you might have seen Chevy Chase and the Griswold family pull up to the front of it in National Lampoon’s Vacation movie back in 1983.

The hotel was designed by Charles Whittlesey at the behest of the Santa Fe Railroad, whose Grand Canyon Depot was only about 300 feet away from the hotel. The architectural style came to be known as National Park Rustic. The railroad hired the well-known Fred Harvey Company to manage it, making it a Harvey House. Since the area was more or less the end of the western line of the railroad, it wanted a fancy-schmancy destination resort for rich tourists. They got it in spades! the porch on the right in the pic below faces the canyon where I took the pictures at the beginning of the post. 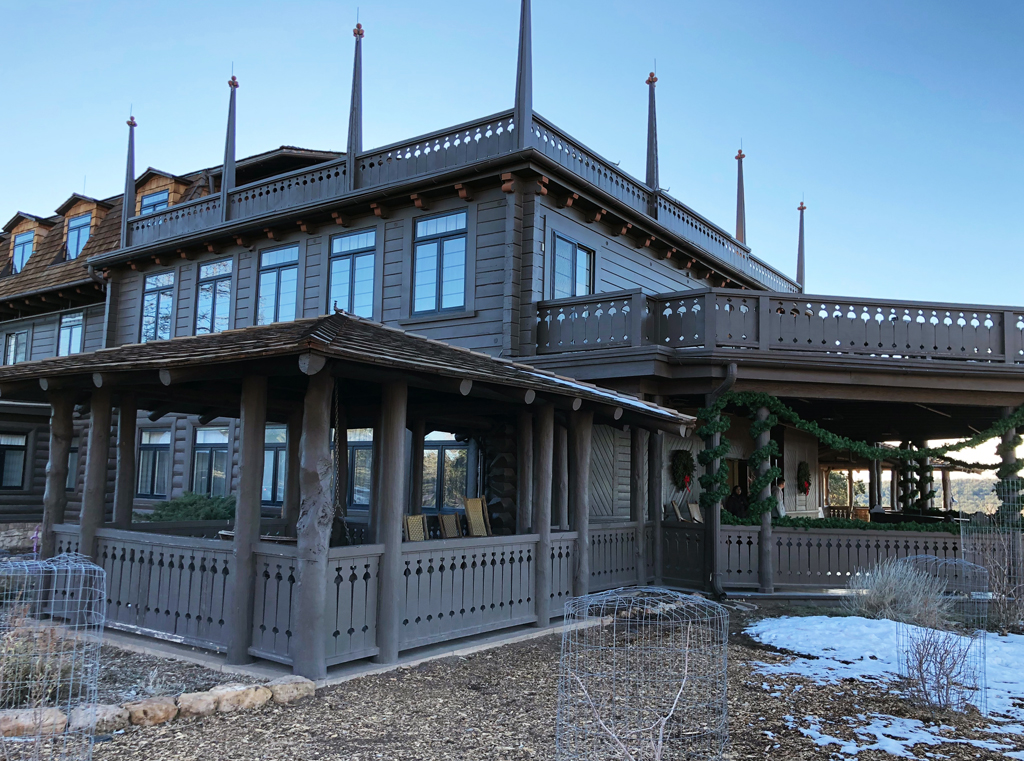 The hotel has 78 fully modernized guest rooms (originally 103), a gift shop with lovely jewelry by Native Americans, a newsstand, dining room and lounge. We tried to have lunch there, but it was between meal times and the dining room was closed. We did visit the lobby where you can see they have maintained the rustic log feel: 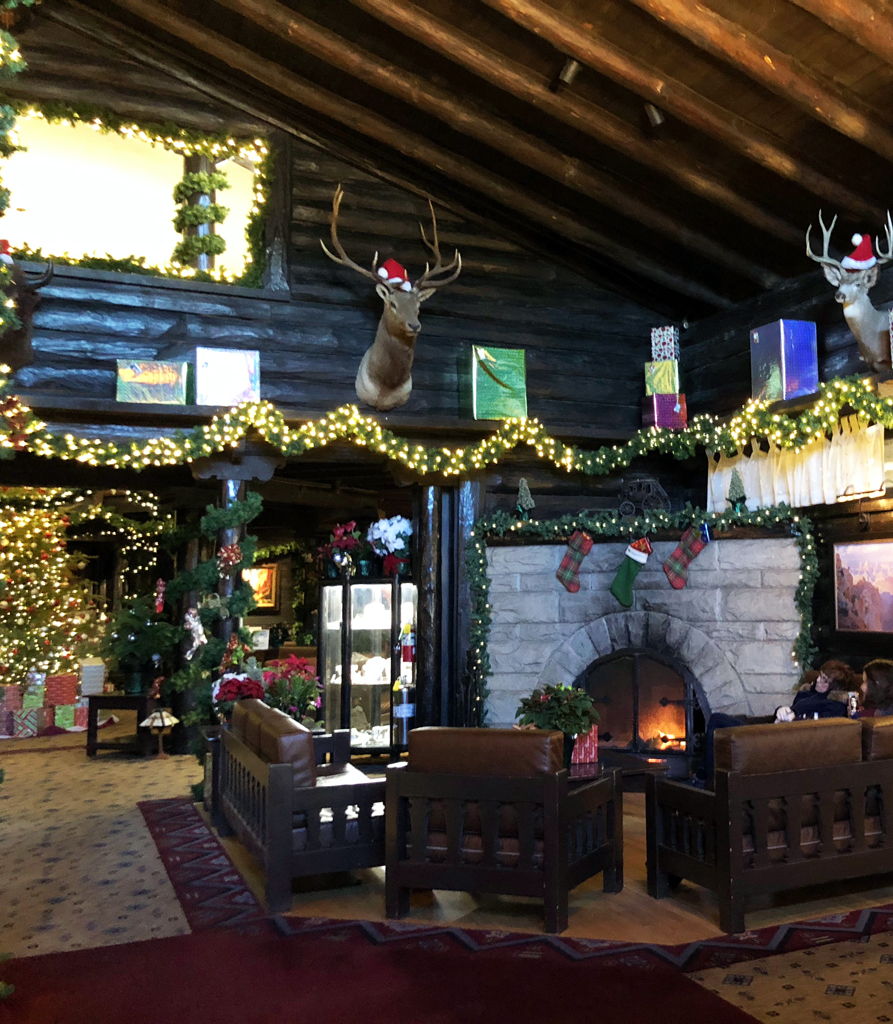 Wikipedia describes the lobby style as “Western-Swiss” – as good a description as anything else, I guess. 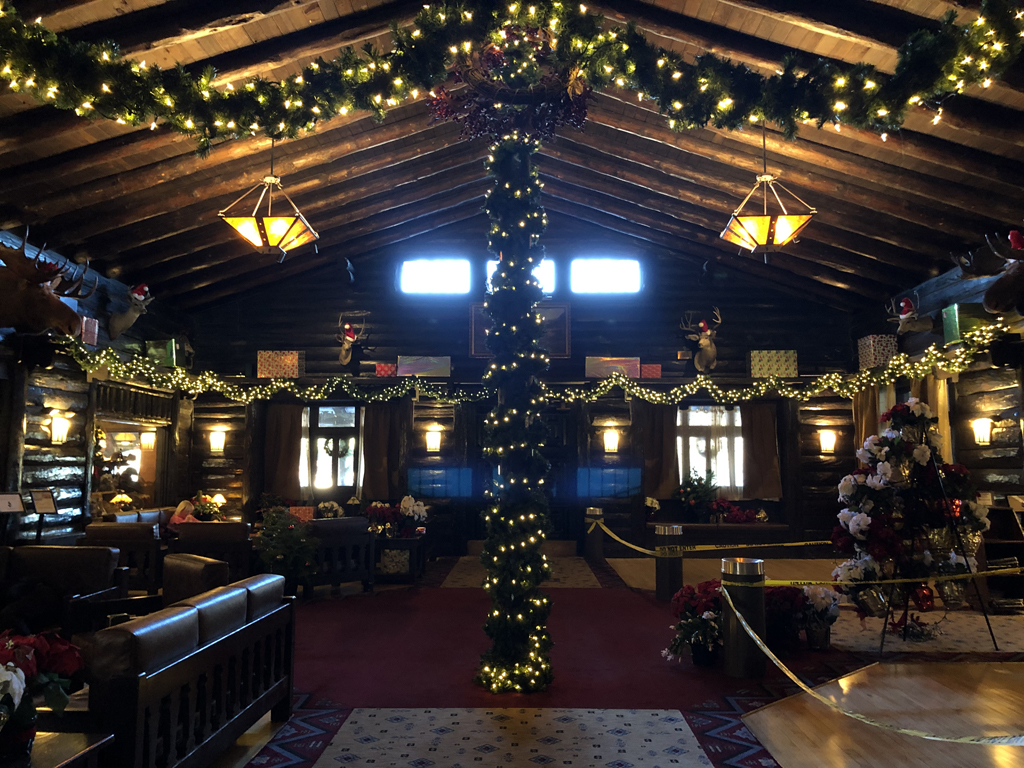 It’s no surprise that the hotel is on the National Register of Historic Places and is designated a National Historic Landmark. Teddy Roosevelt, Einstein, Zane Grey, Bill Clinton and other famous people slept here.

When El Tovar opened, it was before the Grand Canyon was a national park. T. Roosevelt designated the area as a game preserve in 1906, but there was no such thing as Grand Canyon National Park until 1919. The hotel was named after Pedro de Tobar, who was a leader of a detachment of Coronado’s conquistadors in the 1540s. He is credited, if you read the right sources, as the first European to set sight on the Grand Canyon, after discovering the Hopi who told him about it. Get this: they thought that this “great river” might be the “Northwest Passage to India”. Wow.

The El Tovar (which is redundant, grammatically speaking) is open year round and rooms start in the neighborhood of $200 for basic accommodations. 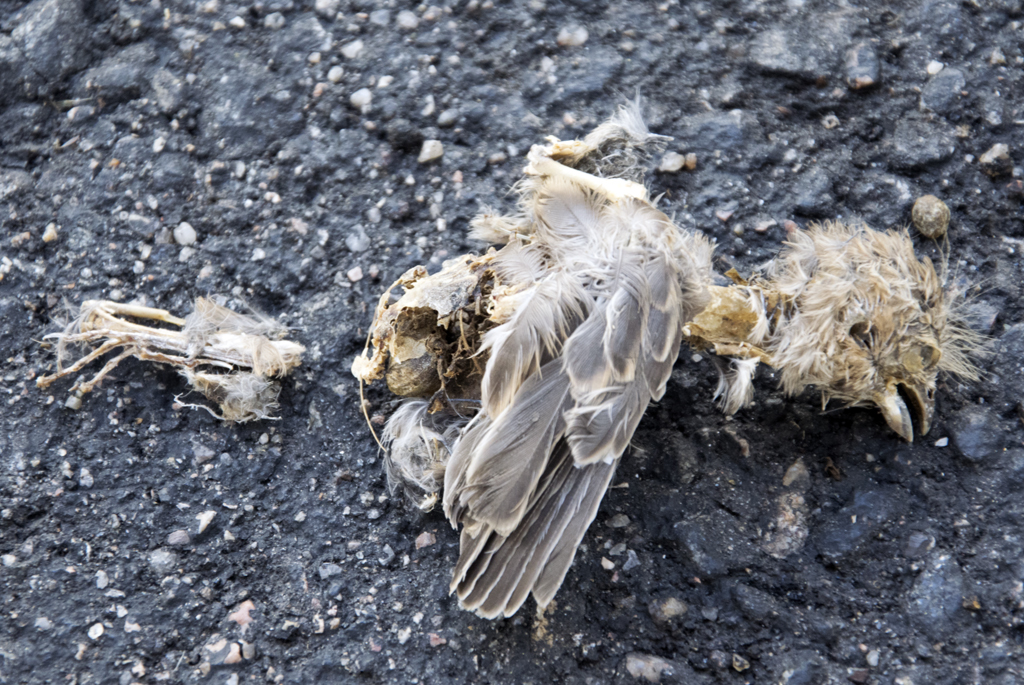