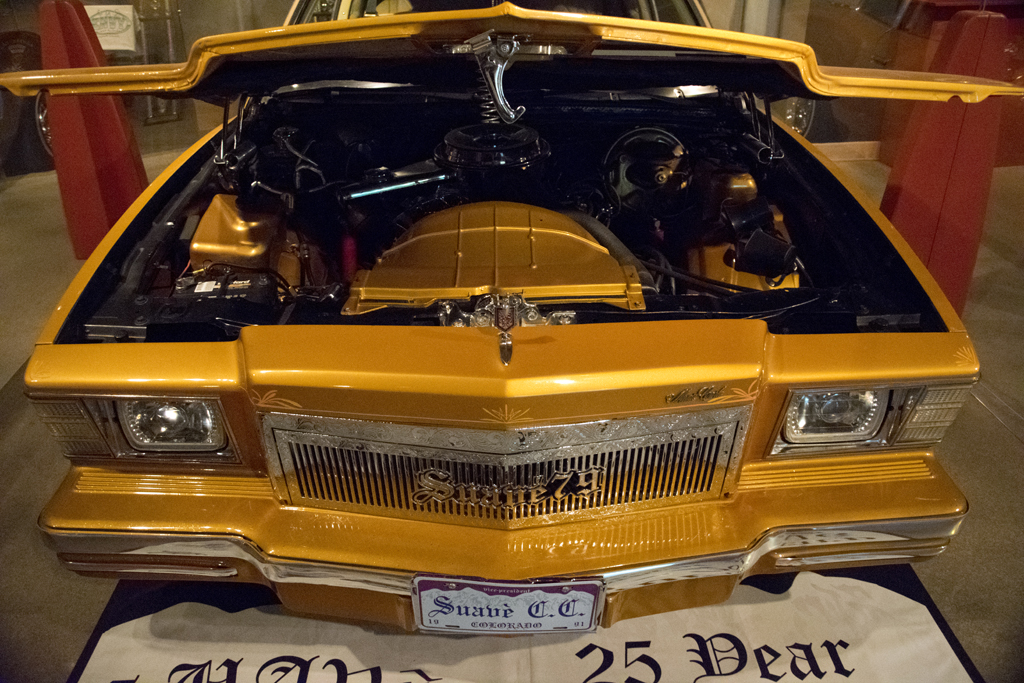 You just never know what you’ll find when you google “things to do near me” on a weekend. I did just that a couple of weeks ago and saw an announcement for a museum exhibit “Colorado Lowriders: Cars and Culture”. It was at the museum in Longmont, a smallish town just north of here, which means just a little farther north of Denver than where I live.

Since I’m interested in cars (MINI is my middle name), especially in modifications (“mods”), lowrider cars are a major draw for me. They have got to be the most chromed-out, modded-out vehicles of all. Also, I’m attracted to different cultures, and the Mexican lowrider culture has its draw, too.

For background: Lowriders are cars that have been modified to ride low to the ground, and most often they have hydraulic suspension systems that allow them to be raised or lowered. But hydraulics are only part of the story. In addition, they have masses of chrome, intricate pin-striping, etched glass, airbrush murals and whatever else a lowrider owner can think of to incorporate.

You should know that part of the lowrider culture is being in a car club. Each club has its own name and plaque, which, if your lowrider is cool enough, clean enough (very important), and low enough, you can display the car club plaque in your car. These are some actual plaques lent to the museum for the exhibit: 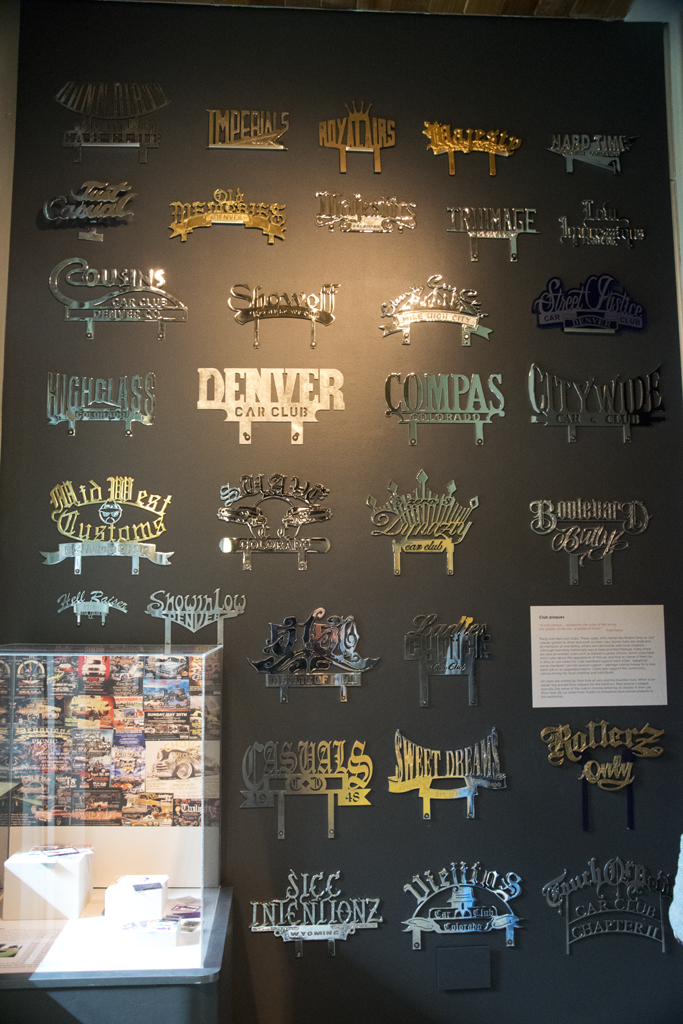 This specimen’s name is “El Chulo”, which, according to my translator, means “The Pimp”. 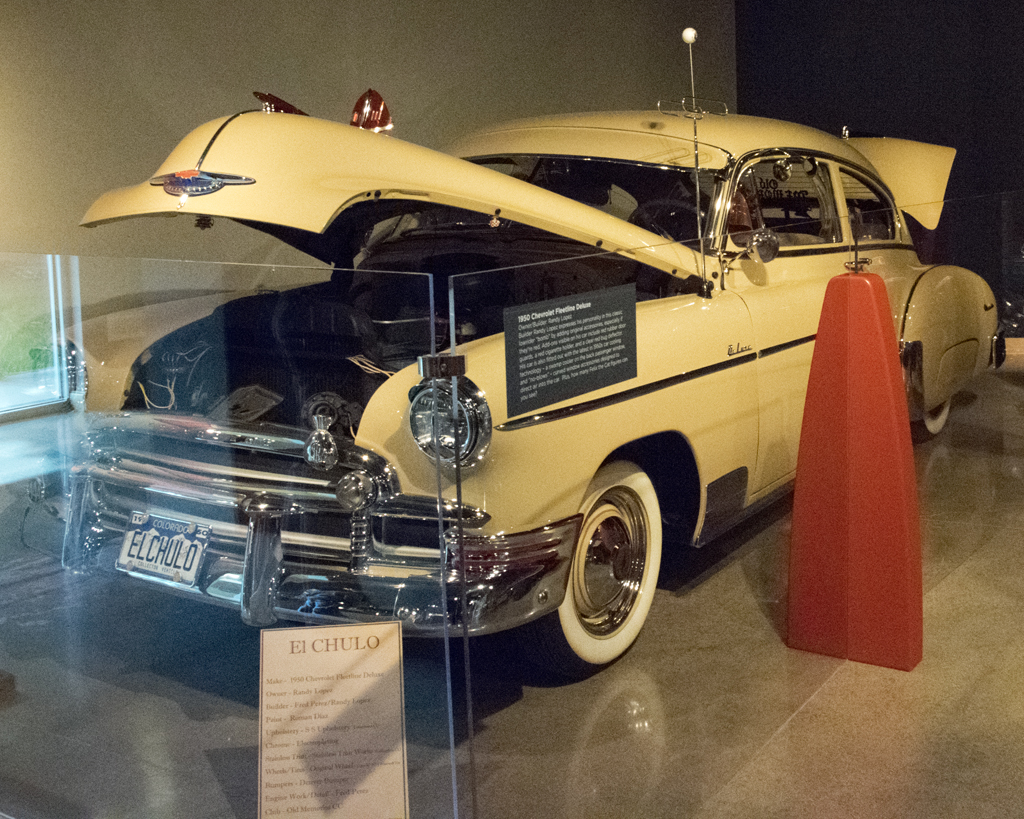 Each car had a sign next to it listing the owner and the people and shops who modified the car. I’m glad of that, because artists need recognition. I especially liked the sideview mirror contraption on El Chulo: 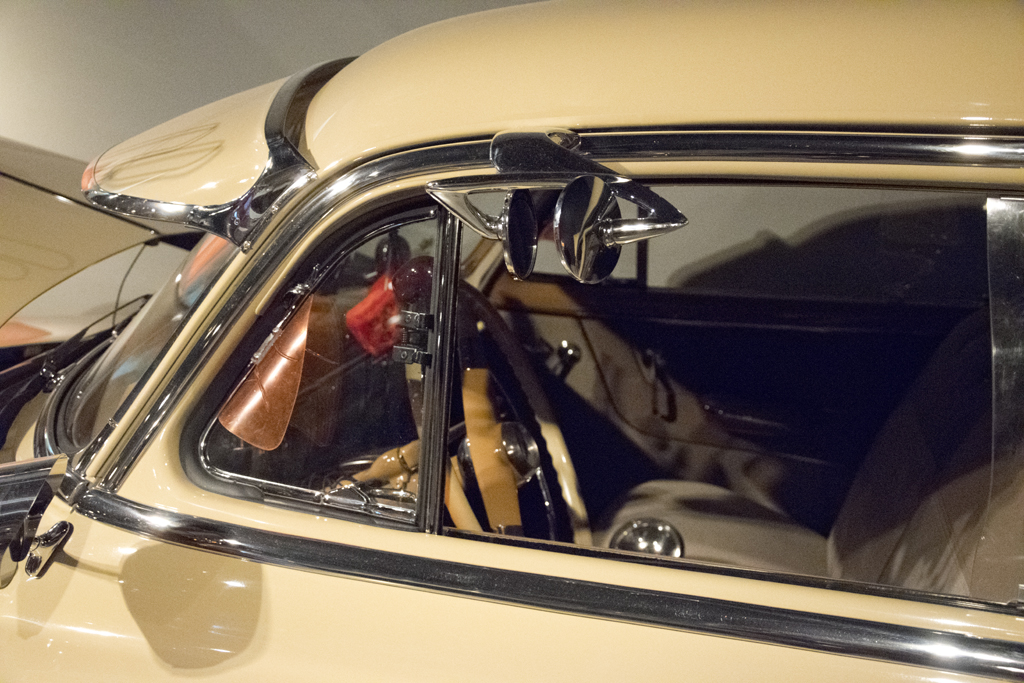 At the museum there was an exhibit about what exactly goes into just the paint job on a lowrider. For a picture of the original car panel, go here. And below is my video of the exhibit piece itself:

The lowrider culture arose out of the Mexican population in Los Angeles in the mid- to late-1940s. I’ve read that, originally, young men would put sandbags in the trunk of the car to cause it to ride lower. Then groups of them would cruise the streets very slowly, hoping to impress young women. Over the years, suspension springs began to be heated and bent or cut and shortened so that the cars were lower without the sandbags. In 1958, California enacted laws making it illegal to drive a car in which any part of the body was lower than the wheel rim. For many reasons, this law was directed at the Mexican lowrider community. Their response? Use surplus military aircraft parts to build hydraulic suspension systems for the cars. Then, when a lowrider driver saw a cop, he flipped a switch and his car instantly became street legal. Never underestimate….

There’s a whole helluva lot more culture and history to lowriders, and I won’t present all of it here. You know how to use the internet. Also, the movie “Lowriders” has just come out. Go see it; it has a lot of culture and tech, too. However, if I’ve gotten any information wrong, please let me know. All this background is being brought to you by a white girl from the Midwest!

My husband and I visited the exhibit in Longmont, a town named for a Major Stephen Long. The good major was, according to the Longmont Museum and other sources, the first person “on behalf of the US Government” (how PC) to see the mountain now known as Long’s Peak. That was in 1820. It’s a 14,000+-foot mountain we can see from our apartment. It’s one of the more recognizable peaks here.

Anyway, the lowrider exhibit was small but really great. I am presenting three of the five cars in their own little galleries within this post. First, a cherry red Chevy convertible:

Next, a gold Monte Carlo from the “Suave” Car Club:

The detailing is incredible! Then, a 1992 Chevrolet K15000 pickup truck, which was, by far, the most impressive vehicle there! Notice the tilted cab frame; it was permanently mounted that way, not hinged. Also, notice his car club plaque in the passenger window.

And now this 1948 Chevy Suburban named “Sky Pilot.” In the first slide you can see a photo of what it looked like before the owner rebuilt it.

There weren’t only cars there, either. There are lowrider bicycles so the kids can get in on the act, too. Notice the bones in the frame of the red bike in the middle below. That bike’s name is “Reaper Revenge” and it has hydraulics as well as custom everything else. The signage mentioned that lowrider car builder George Barris created a bicycle for The Munsters TV show in 1964, “prompting many imitations”. Indeed. 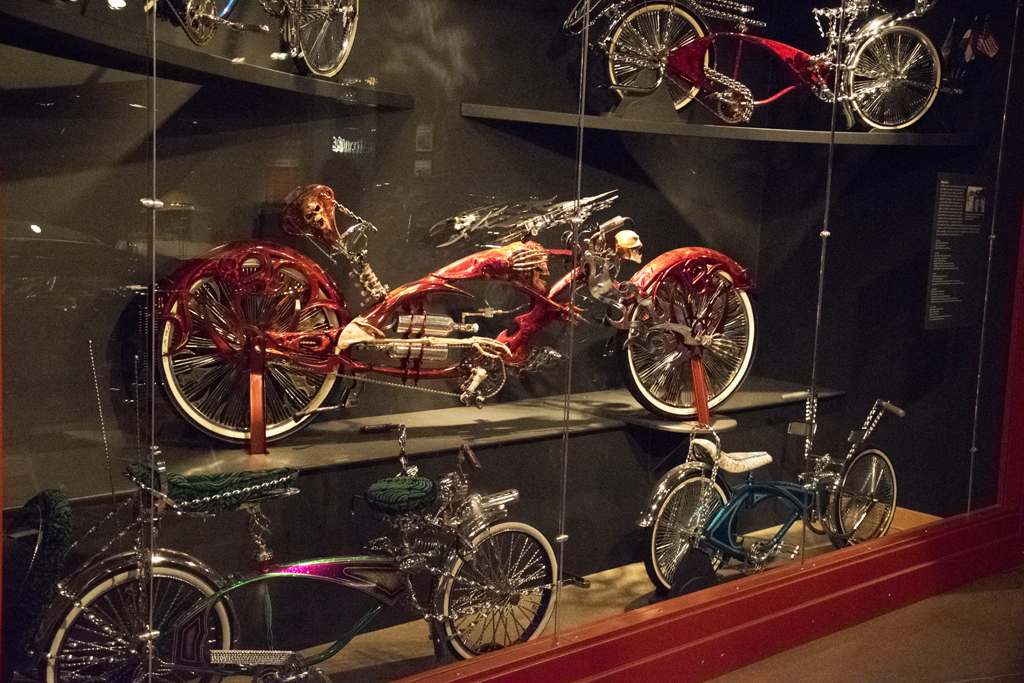 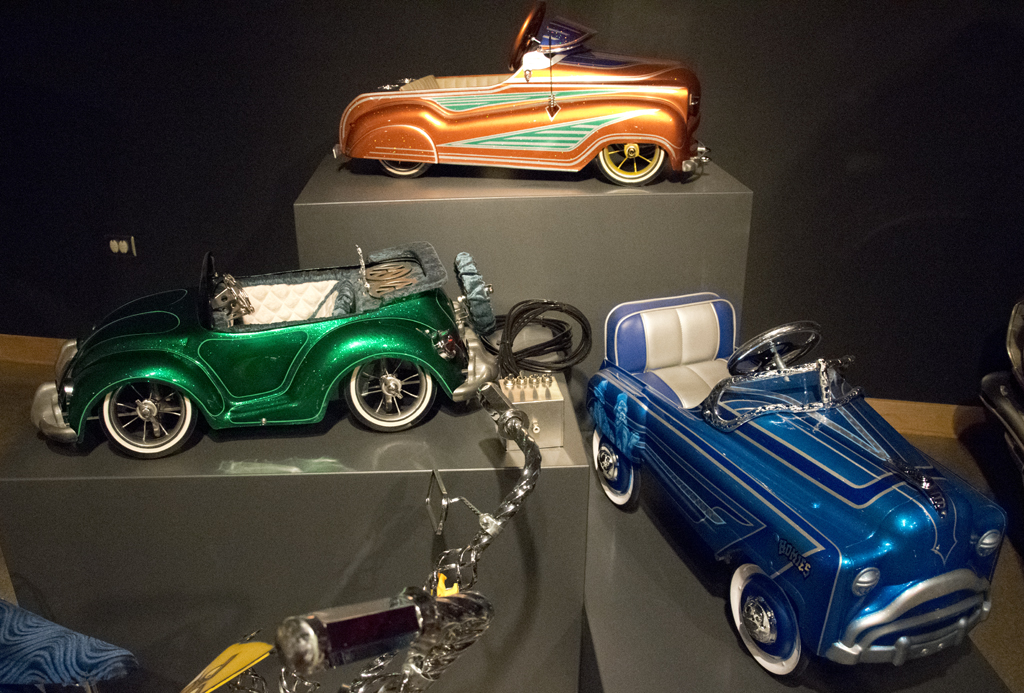 In any case, I hope this trip to the Longmont Museum has been an interesting one. And I hope you do some internet or other reading about the Mexican lowrider culture and history. It’s very extensive and beyond the scope of what I’m presenting here. I’m certainly glad the lowrider culture is beginning to be celebrated these days instead of being suppressed.

Now, if you can get that “Lowrider” song out of your head, you’re doing better than I am! But most of all, don’t miss a lowrider exhibit if you ever have the chance to see one! 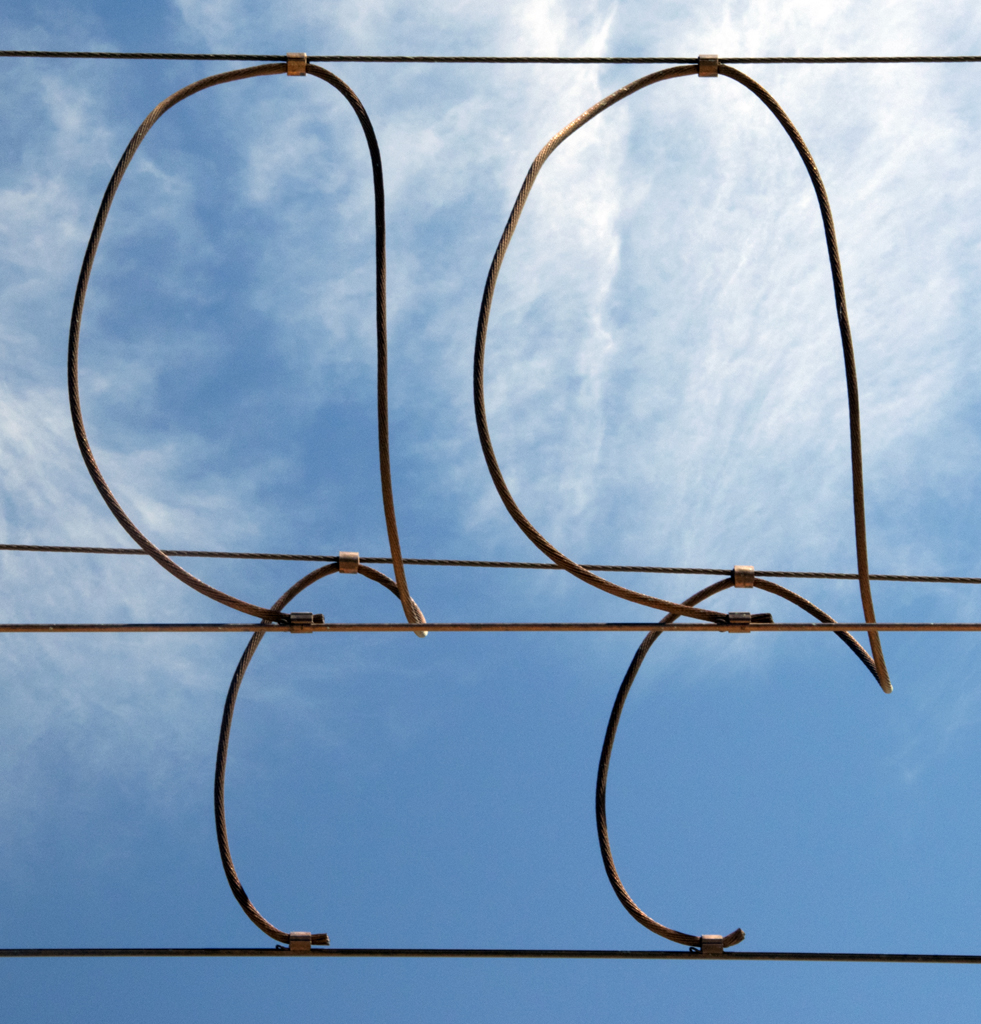 2 thoughts on “Lowrider Cars: Rolling Works of Art at the Longmont Museum in Colorado”