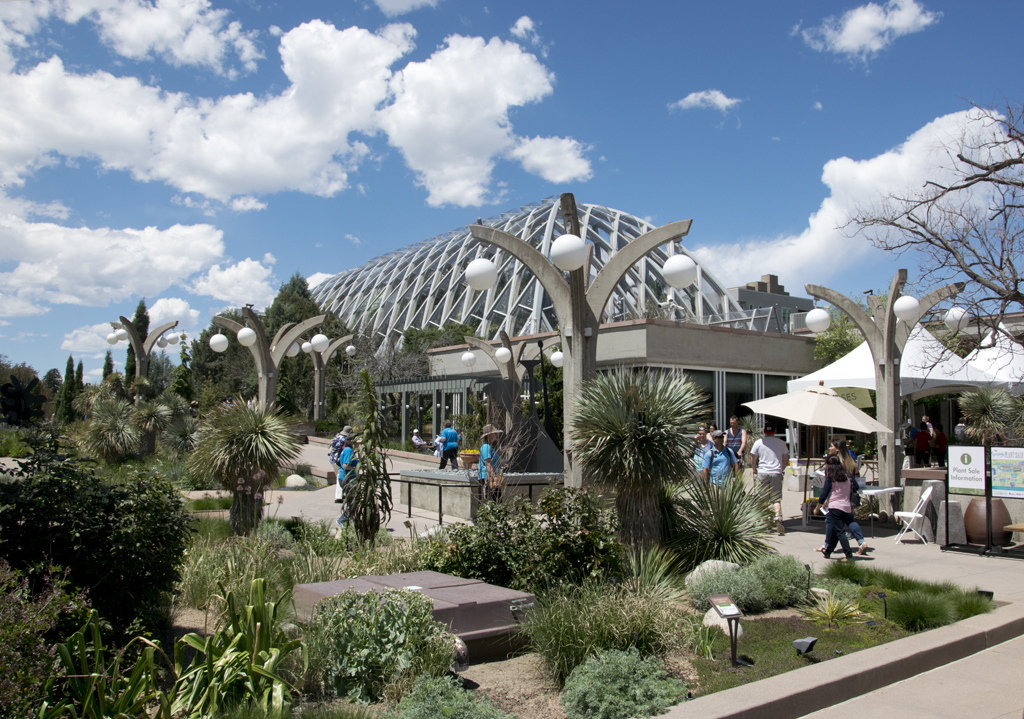 In my first post as a Colorado resident, I recounted a trip via the local commuter trains to the airport and then to the Capitol building. A couple of weeks later, my husband and I set out to see the Denver Botanic Gardens. I mention the first outing only because we took the same first leg of the train trip into downtown Denver to Union Station. From there we rode the free 16th Street Mall shuttle bus to the end of the line, which is right in front of the Capitol. From there we summoned our friendly Uber driver to take us the rest of the way to the Botanic Gardens, which was about 5-10-minutes away on York Street.

The Gardens, dating from 1951, was having their annual spring plant sale. 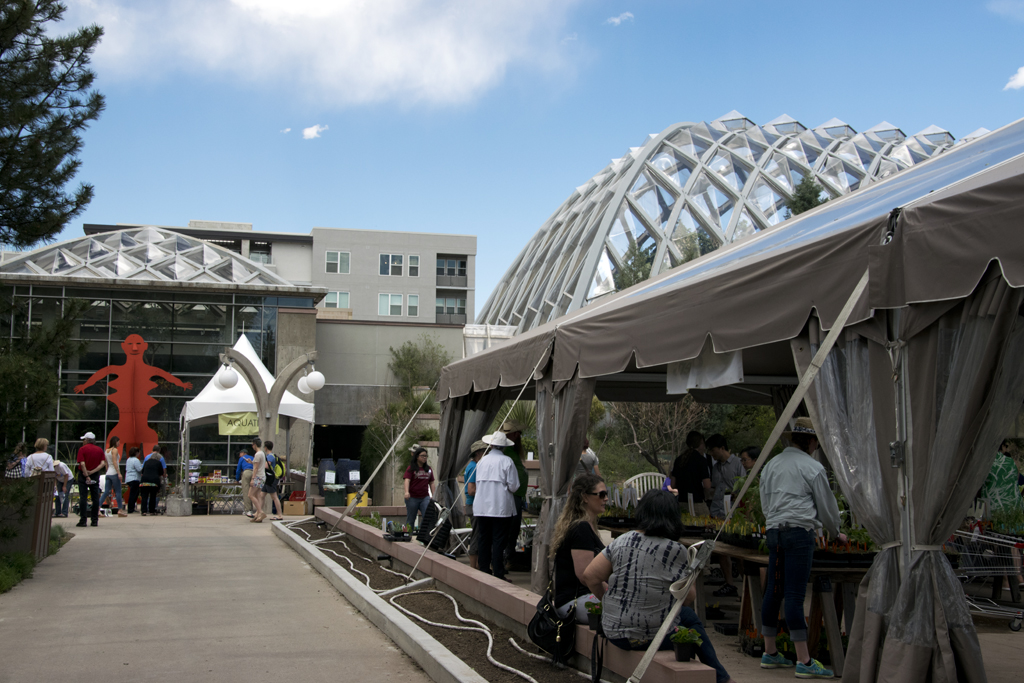 They apparently have an annual fall sale, too. While I didn’t buy any plants that day, I got a good indication of how great the institution is. First of all, it’s HUGE, covering 24 acres. It has dozens of small, themed gardens that flow naturally into one another.

One of the Western Gardens was actually the very first Xeriscape demo garden in the world, begun in 1986. We used these gardens to familiarize ourselves with the local flora of our new home state: 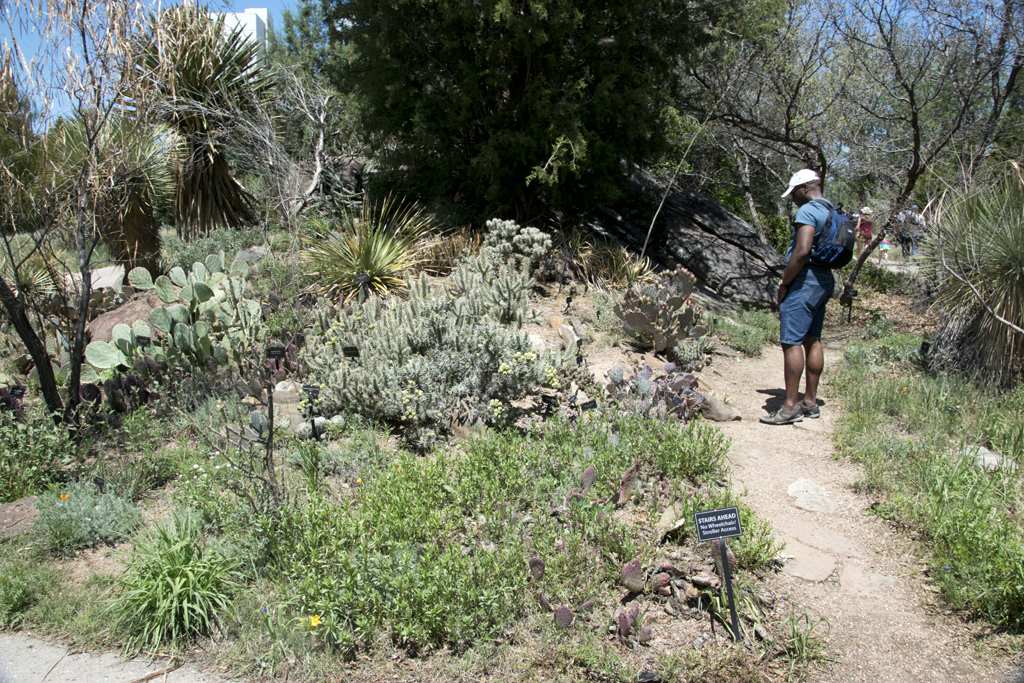 Here’s the noble and ubiquitous sage brush (smells so good!): 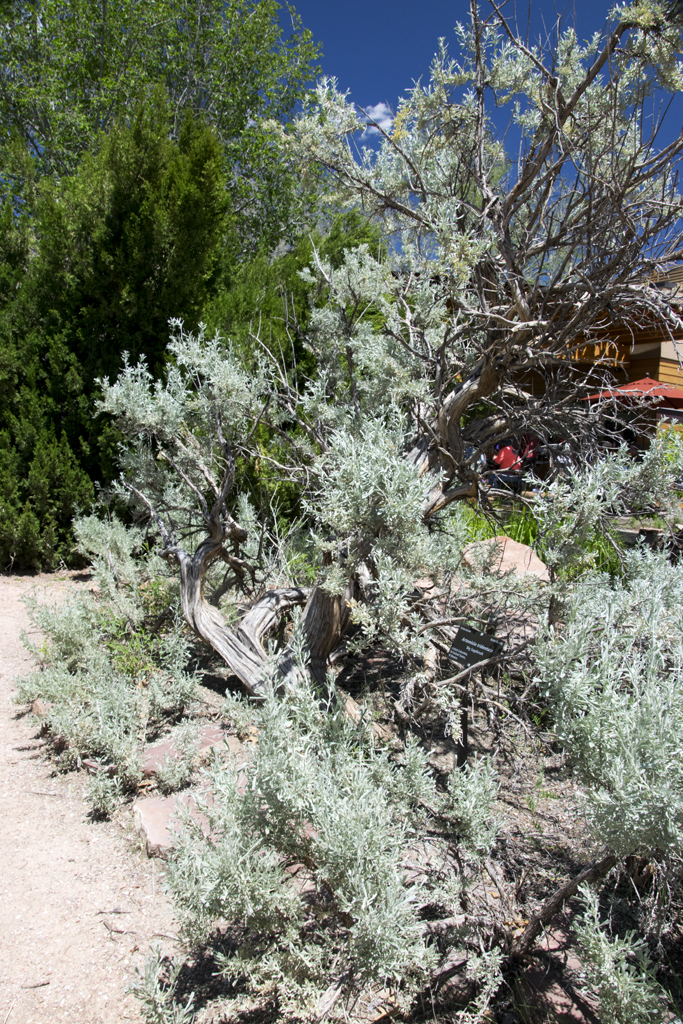 And it doesn’t take a genius to figure out whey the common name of this cactus is “Horse Crippler”: 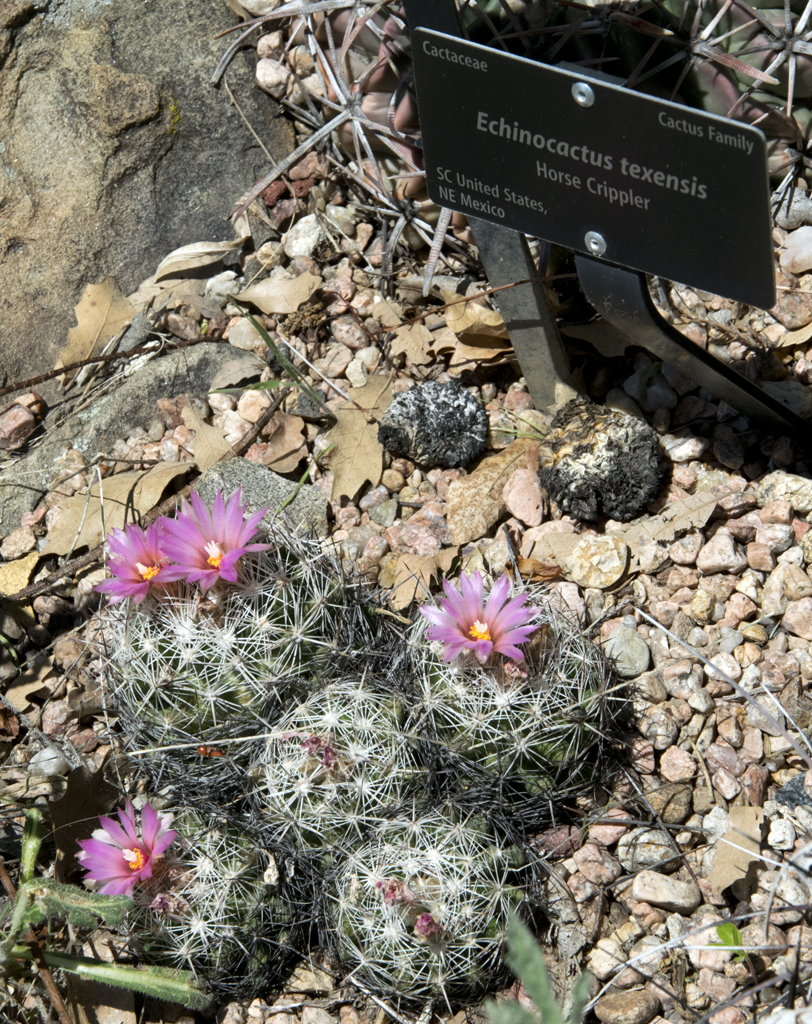 If that doesn’t make you think of cowboys, I don’t know what does!

Near the gate of the Japanese garden was a tree that I’d seen often in Germany but not in the States: 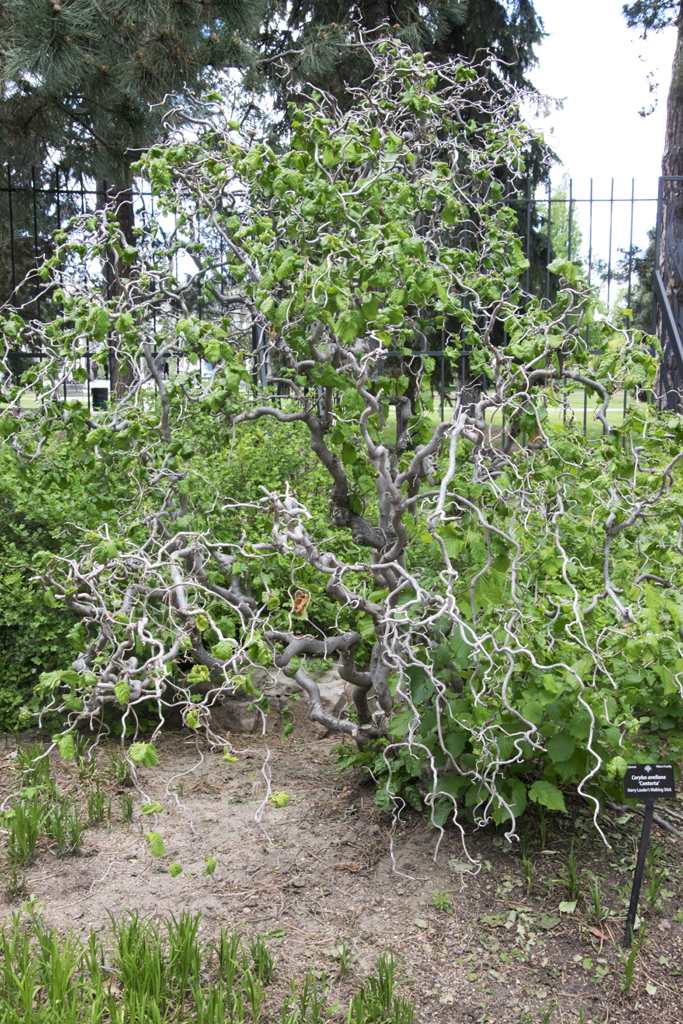 It’s a member of the hazel family but doesn’t produce hazelnuts. I know it by the common name of corkscrew tree. But the sign here indicates it’s also called “Henry Lauder’s Walking Stick”. Of course I looked up who the heck was Harry Lauder as soon as I got home. Turns out he was a super-popular Scottish entertainer (1870-1950) who was at the top of the A List in Europe in his day. And he always used a walking stick made from this tree. Click here for a picture of him and his famous stick.

Here’s an apple tree in one of the fruit gardens. It’s pruned and trained into a flat, horizontal pattern called espalier. That’s one of my favorite words in the language! I learned it when I saw trees trained similarly in Vienna, except in Vienna there were five horizontal lines to imitate musical staves. In espalier, the tree grows flat against a wall, saving garden space. 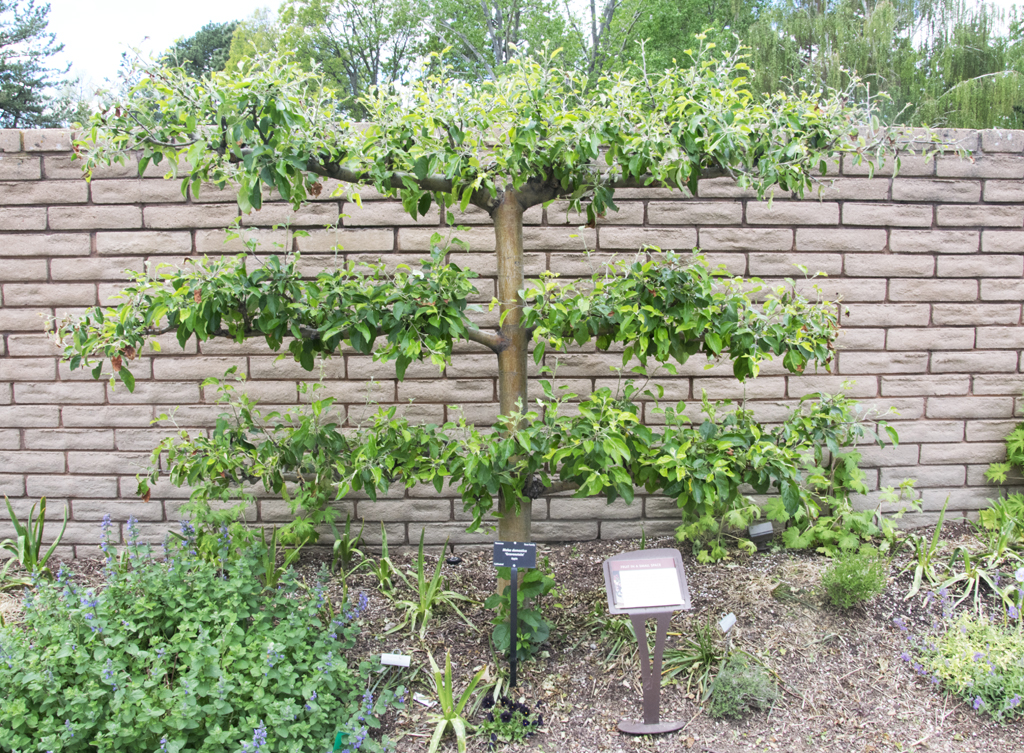 Interspersed amongst the gardens was beautiful architecture, such as the Orangery, which they really do use to grow oranges because the climate is too cold for them here: 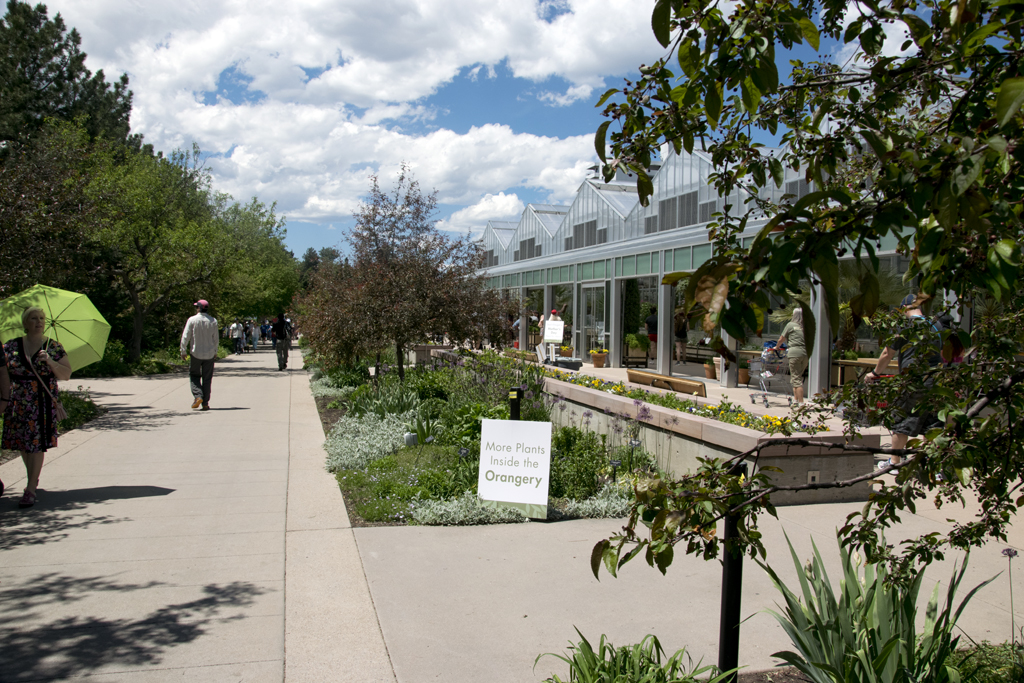 In Marnie’s Pavilion near the Orangery lives a corpse flower. It’s scientific name is the equally disturbing Amorphophallus titanum. This tropical plant blooms every 7-10 years and, when it does, emits a foul odor like rotting corpses. When it blooms, it blooms overnight and, apparently, crowds come in droves to see/smell it. Denver’s corpse plant bloomed last year, so I missed it. I didn’t see it on this trip, either. But I’ve seen them on webcams in NYC and DC before. Maybe next time! 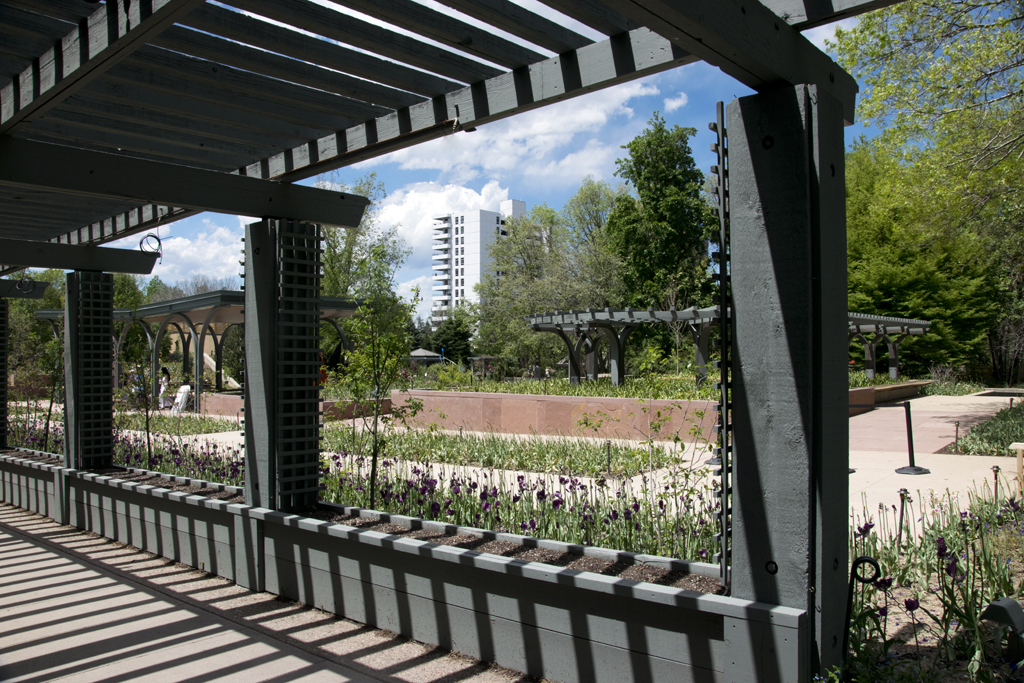 And the intriguing Science Pyramid, filled with interactive things for kids to do, such as coloring book pages and video-game-like kiosks about nature here:

We passed an amphitheater where they conduct a summer concert series: 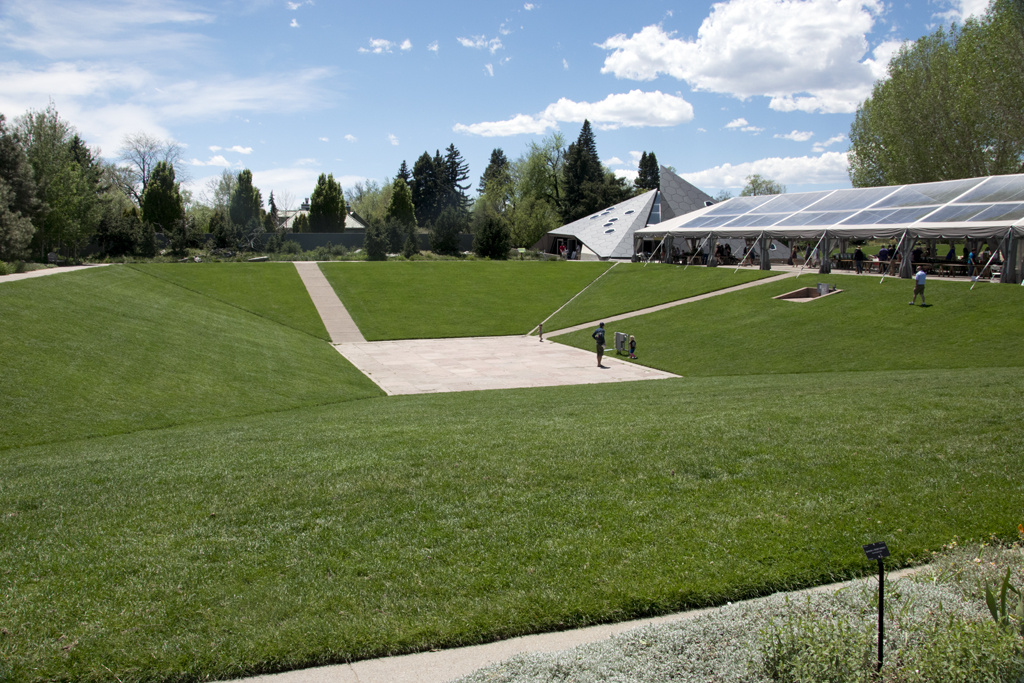 And we saw plenty of outdoor sculptures. Apparently they rotate exhibits each year. This year they have several works by Calder (you may have seen some of his famous mobiles): 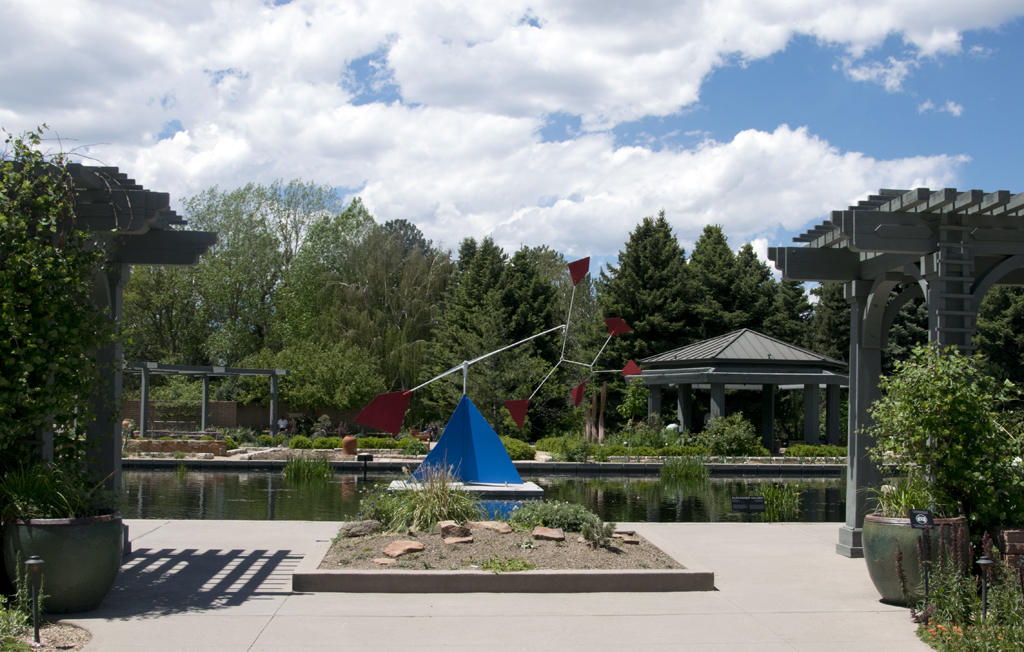 We stopped for an iced tea at The Hive snack bar and hung out at the water garden in front of it: 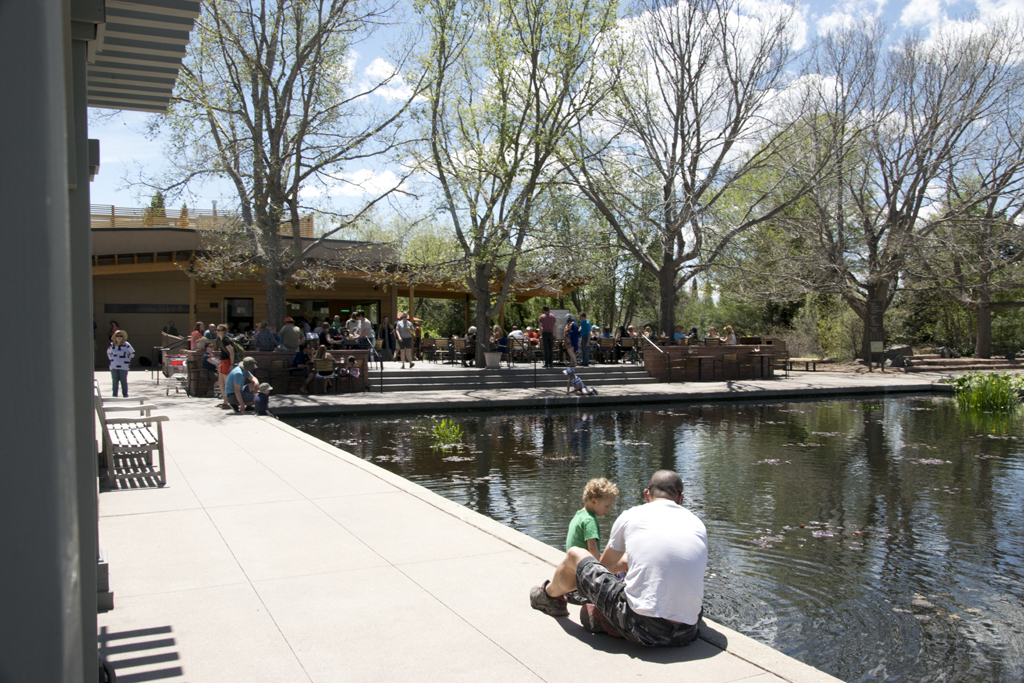 The Botanic Gardens has a second location about 40 minutes to the south in Littleton. There they have wildflower gardens, an 1870s ranch, a lavender garden, a butterfly house and a dye garden where they grow 15 kinds of plants used for dying fabric. That’s on my list, too, now!

The York Street location where we were was much too big to tour in one day, of course, so I’m definitely revisiting it soon. They have places for weddings and such plus all the gardens I didn’t see. Looking forward to that.

At the end of our stroll, we exited through a side gate which usually isn’t open on regular days. The gate spilled out into the enormous Cheesman Park, an 81-acre green space in the heart of the city. In fact, the Botanic Garden was installed into one end of Cheesman when it was moved in 1958 from a less protected location.

Interestingly, Cheesman Park is located on the site of the first city cemetery. In fact, when they decided to move the cemetery in 1890 to build the park, families of those buried there were required to have their family members’ remains moved. Not all of the bodies were claimed, however, since some were paupers and criminals, etc. There was some kind of scandal about the company that was supposed to move the rest of the unclaimed bodies; apparently they didn’t actually move all of them. And apparently there are still a couple thousand bodies under the park today! So, when the Botanic Gardens was moved to the park, it was also on top of some of those bodies. In fact, when they were building a parking garage in 2008 for the Botanic Gardens, human remains were found, so the coroner had to come rebury them. Also, several websites I read in researching this blog post say that the park and Gardens are haunted.

Well, we didn’t see an apparitions that day, but when I go back I’ll keep an eye out and let you know. 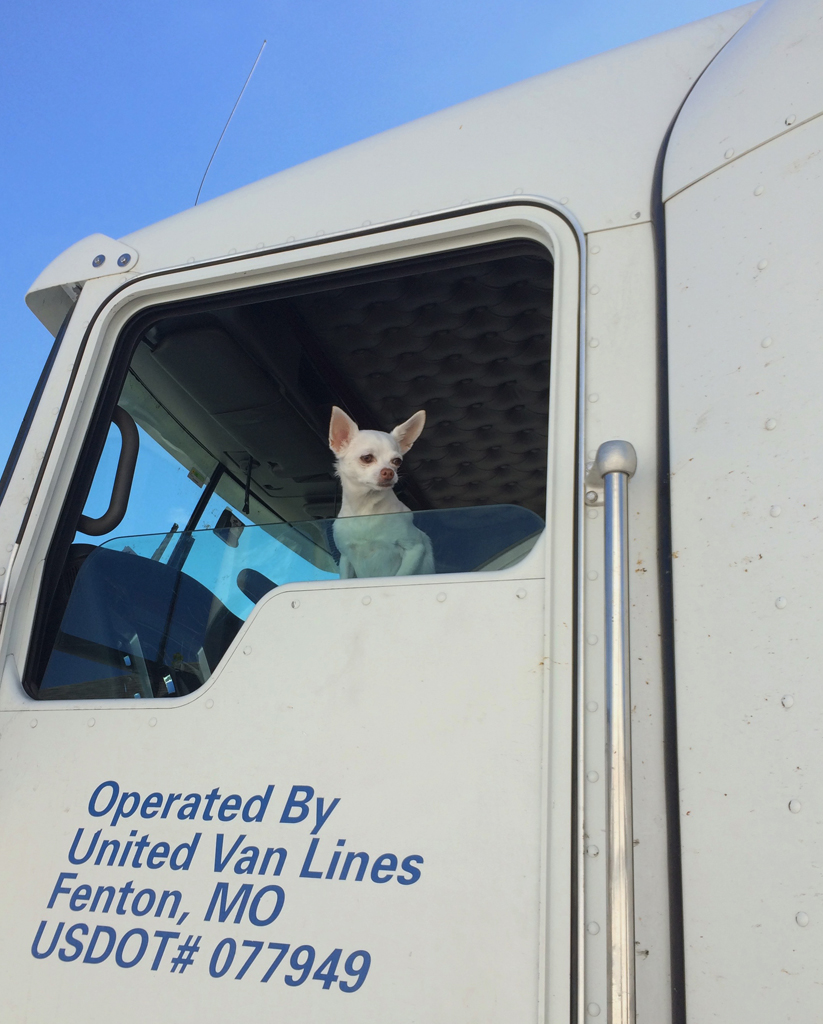