For those of you who are NOT subscribed to this blog, click here to find out more about my summer book sale! (Subscribers have already seen an email or two about the sale in their inboxes.) Lots of you have asked for signed copies of my books, which you can’t get via Amazon. Right now through 31 August you can get signed copies of my PFNAR 2015 at a discount over Amazon’s price, plus some other good deals to go along with them. Hurry and get yours before time runs out.

And if you haven’t subscribed to the blog, please do so using the bar across the top of the blog post to sign up. Remember that I bring you this blog for free. It’s the book and gear sales that help me pay for the web hosting service and my trips. So do some summer Christmas shopping, ok? I always appreciate the give-back. For those of you who have already ordered, a BIG thanks!

For the past few weeks I’ve described places I encountered on Memorial Day weekend during the mountain road trip my husband and I took this year. Well, the whole ray-zon dee etra of the trip, as far as I was concerned, was the topic of today’s post: the Georgetown Loop Railroad steam train. In fact, I bought the train tickets and then we built the rest of the trip around that!

The Georgetown Loop Railroad is a tourist attraction, to be sure, but it’s a restoration of the original silver mine train loop that stood on the same site.

Railroads made their way into the Rockies in the late 1800s because of gold and silver strikes. Once the rush was over, the railroads were a way for tourists to experience the mountains. During the build-up, the route known as the Georgetown Loop was constructed. By the early 1900s, though, automobiles replaced trains as the main mode of transportation for tourists. By 1938, the trains had stopped running and the Georgetown Loop had been dismantled.

However, starting in 1959, a program by the Colorado Historical Society begins to acquire the land and reconstruct and preserve the railroad and mines in the area. By 1975, a small portion of the Georgetown Loop had been rebuilt and tourists could again ride historic trains on it. As of 1984, the whole Loop had been restored and was opened for visitors.

So, on our way back to Denver from the Bachelor Gulch/Beaver Creek area on Sunday of Memorial Day weekend, we arrived at the Silver Plume Depot, restored in 1985, to board the train. 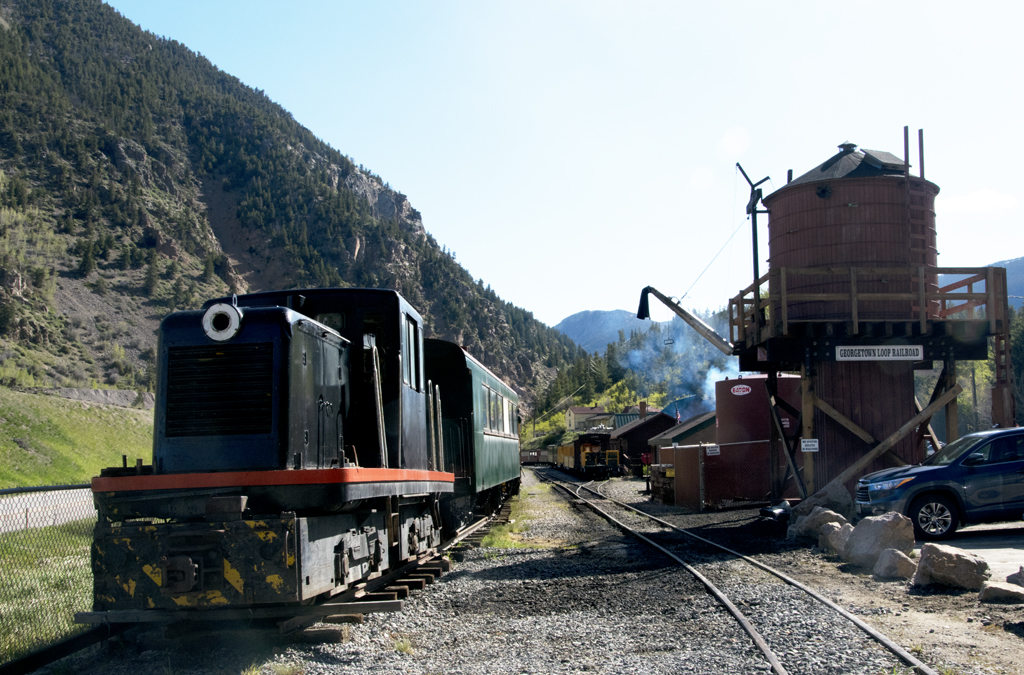 One of the first things I saw, actually heard, was this: 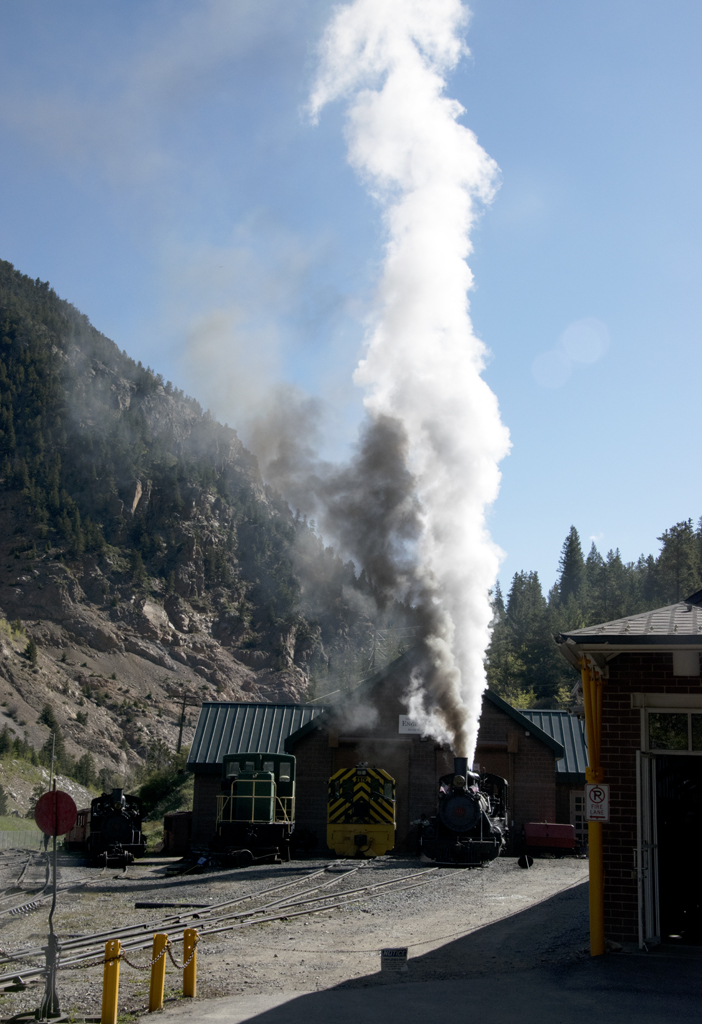 And I had to retrieve our reserved tickets at the depot ticket office. Notice how all the personnel are dressed for the part: 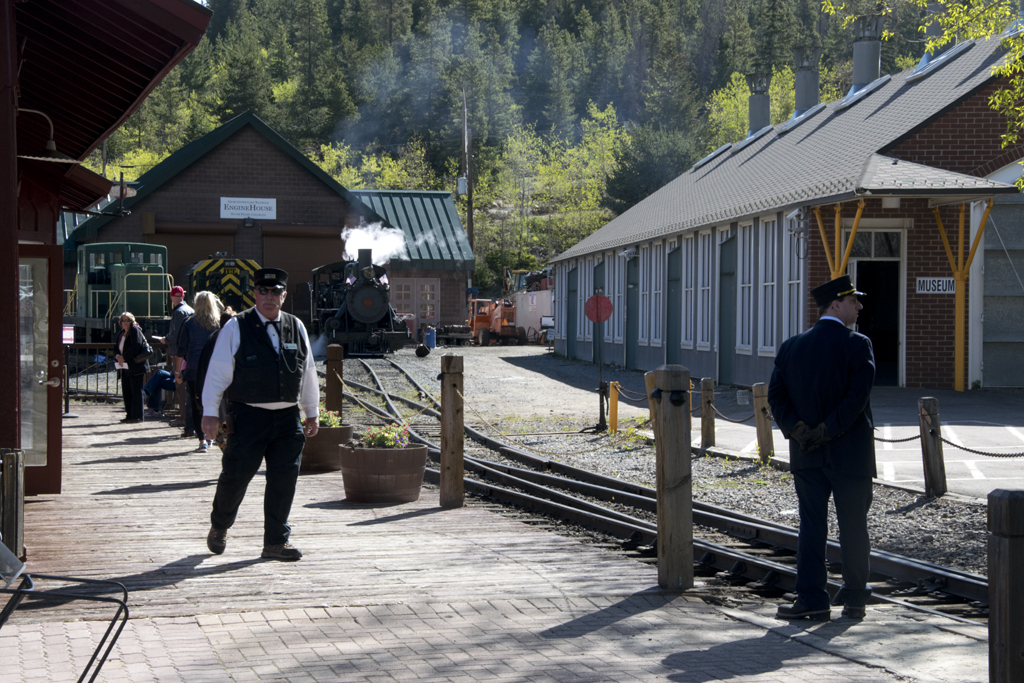 You can see the railroad museum in the above photo on the right, across the tracks from the ticket office. In the background is the huffing and puffing locomotive in front of the engine house. 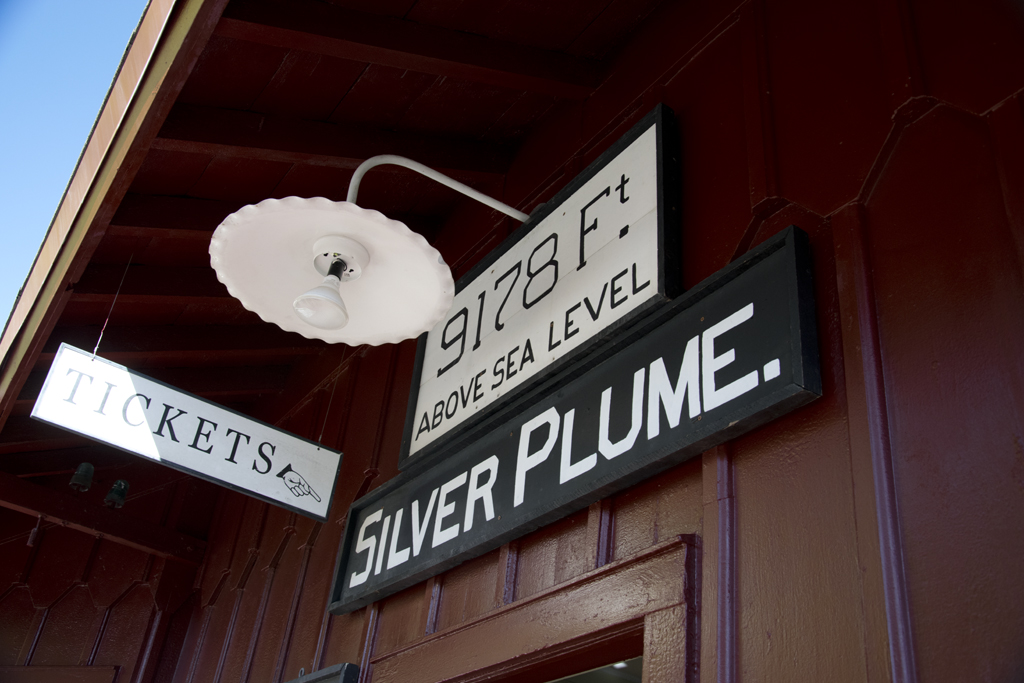 The ticket office itself was also dressed for the part: 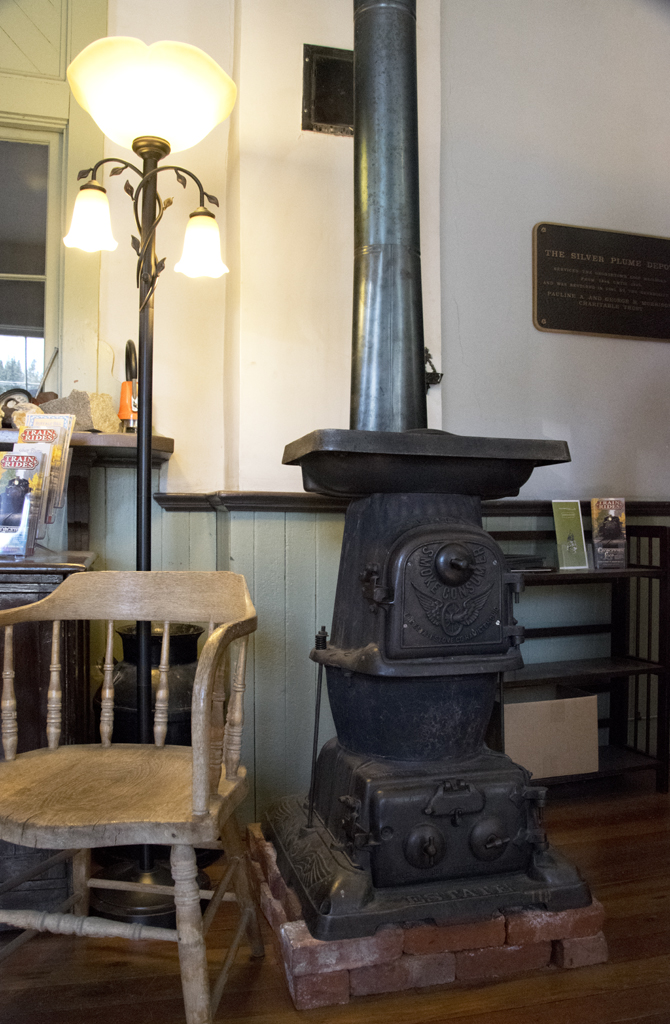 We had arrived early, so we had time to visit the museum (included in the price), which, admittedly, was not very elaborate – plus it was downright cold in there! 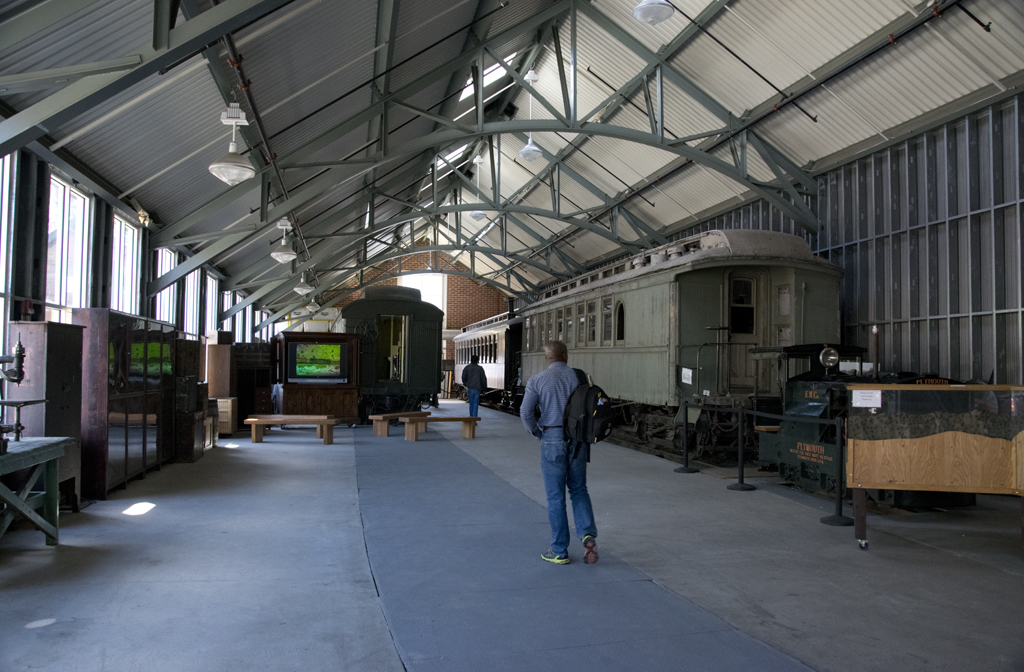 That wooden display case on the right in the photo above is a model of the Loop, which gave us a nice concept of where the train runs and the terrain surrounding it.

Then we waited some more – I’m glad we got there early because I got better photos without many people. But just when I was about to get very bored, two guys came out to wipe down Old Number 111’s face (possibly my favorite shot of the day): 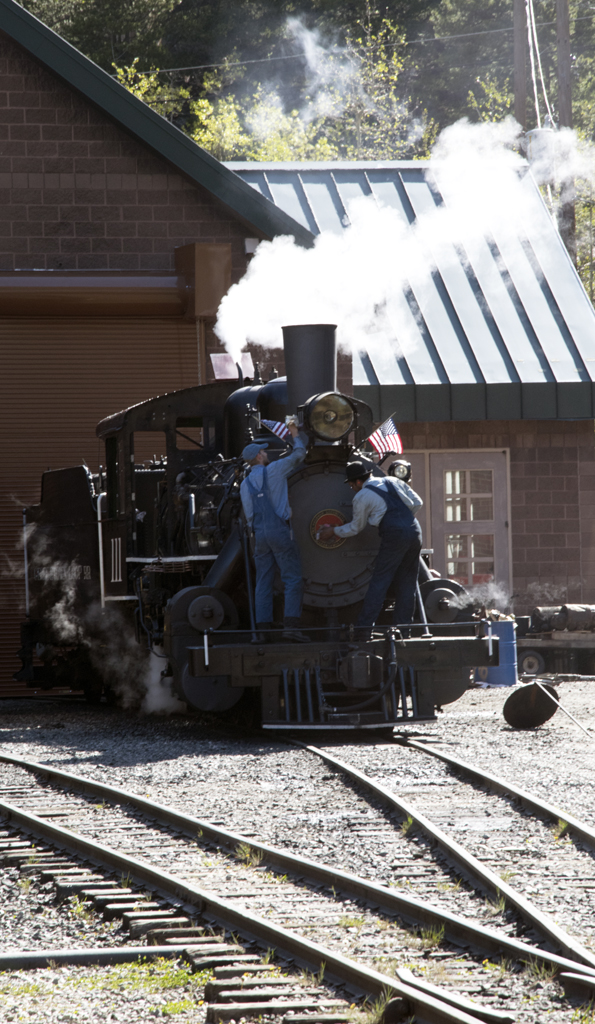 Steam Engine 111 was to be our iron horse for the trip. Because the railroad had been dismantled in 1938, none of the original equipment, charmingly called rolling stock, is still run on the Loop. They had to collect engines and cars from other places. In this case, Number 111 was built in 1926 by Baldwin Locomotive Works in Philly. It did some time in El Salvador before returning to the USA. It was on display in Breckenridge until it came to Silver Plume for rebuilding. Then it was pressed into service in 2016 for the Georgetown Loop.

When we were finally ready for boarding, I was glad I’d chosen the “Parlor” class instead of the “Coach” class. Here’s the coach car we walked through first: 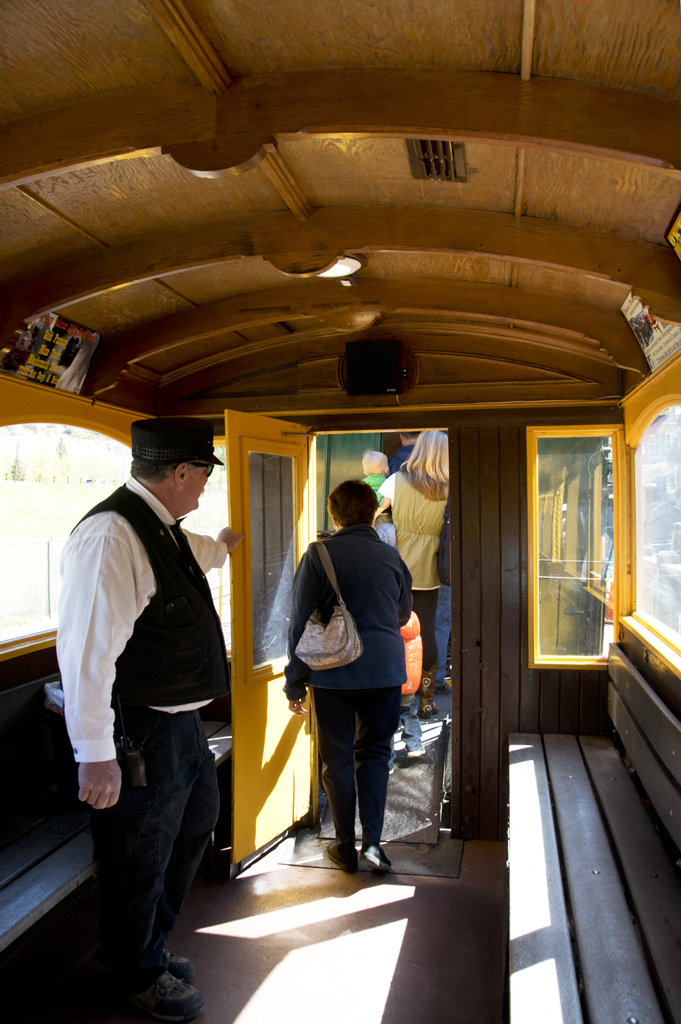 And our “luxury” parlor car (notice the chips and granola bars in the basket on the table. AND we got a soda, too, ALL INCLUSIVE! Nothing but the best for us! 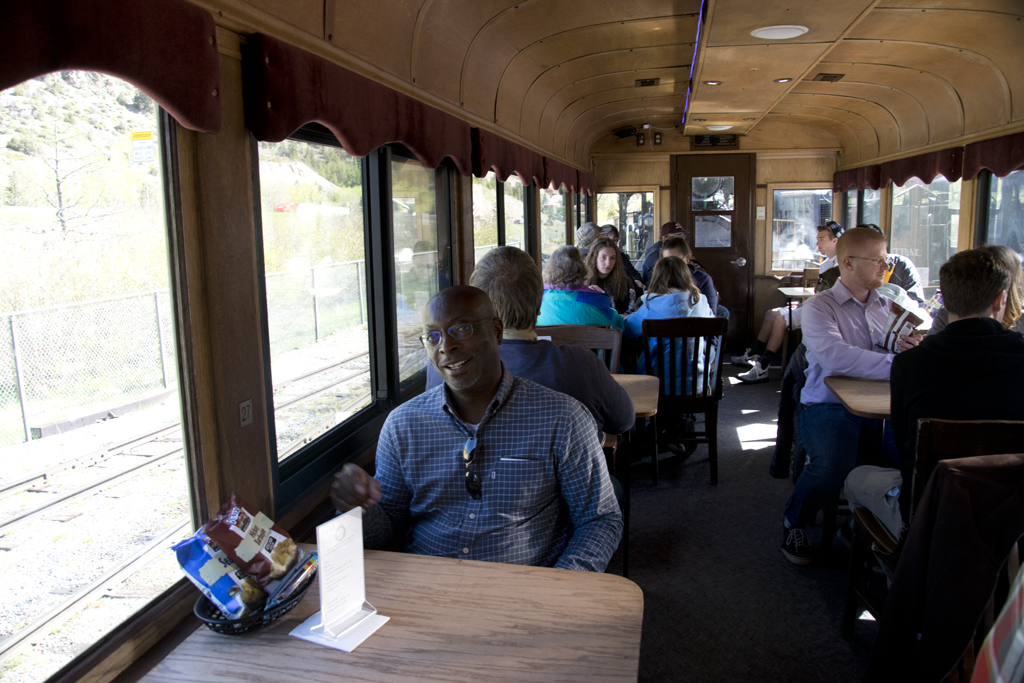 I’m given to understand there is a quite luxurious Pullman car available, complete with velvet divans and such, but not that day, not at the prices we paid! I think it’s only for special events. Anyway, our car formerly ran on the White Pass and Yukon Railroad. That route still connects Alaska’s Skagway port with Whitehorse in the Yukon. It’s car number 228, in case you’re interested.

Our car was at the front of the train heading out, and Old Number 111 was actually nose to us because (they told us) the locomotive has to act as a brake doing downhill, which is most of the first leg of the trip. I think it might actually have been because it was easier to put it on the other end of the train when we got to Georgetown.

In any case, we set off! Choo-choo! It was slow going and not entirely smooth, as you would expect. We ran alongside the interstate for a while then veered off a little into the valley and ran along Clear Creek, all on the narrow-gauge track, of course.

Along the way we passed, and actually stopped at, the old Lebanon mine, which has also been restored along with the railway. For extra pesos you can get off the train here, tour the mine and pan for gold or silver (see the two sluices under the foremost tent?) and get back on the train on its next round. We didn’t do that this time, though. 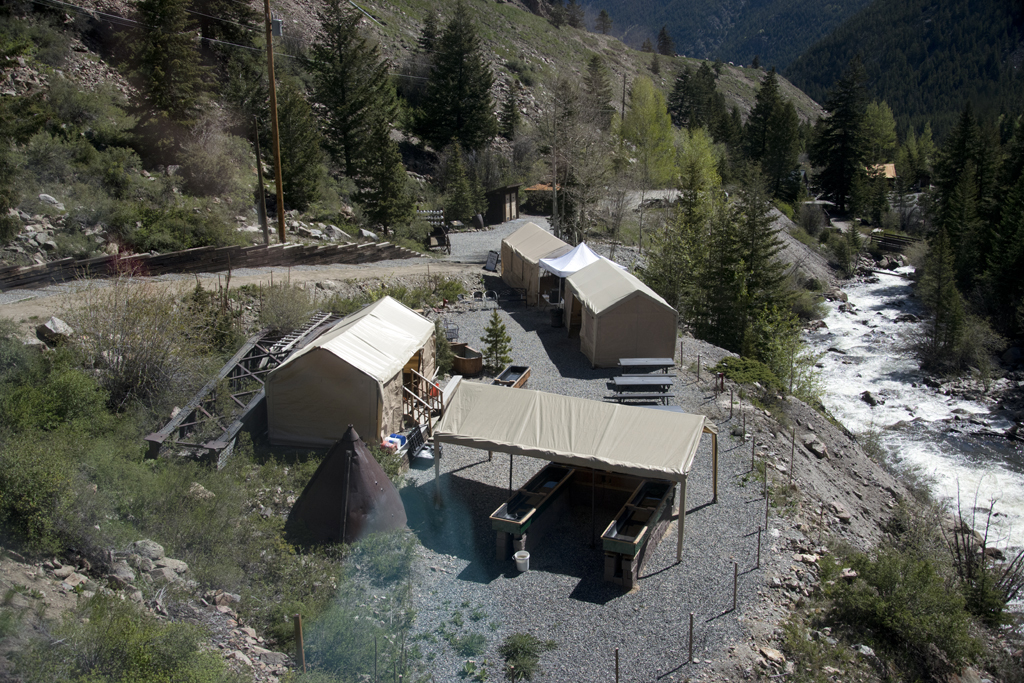 There was a guided tour given by the train engineer that came over the loudspeakers. I couldn’t hear it very well because of the other passengers talking and also because of old train noise. Eventually the woman tending our parlor car took over and gave us the information. Word of advice: NEVER believe tour guides. This one gave us complete hokum (I say, at the risk of sounding even more like Sheldon than I already do). She told us very flawed stories of the origin of the phrase “Miner 49-er”, and gave us a lot of hooey about why trains must signal with the horn two longs, one short and one long blast when approaching a street crossing. These were only the things I knew for sure were wrong. No telling what else was in error. I’ve heard so many tour guides in my life that gave false information – even if they believed it themselves – that I caution you to question every bit of information you hear on a guided tour. (Stepping down off soapbox…)

At one point the train stopped on a very high trestle above the creek. I stepped out on the platform at the end of the car near the locomotive and shot this: 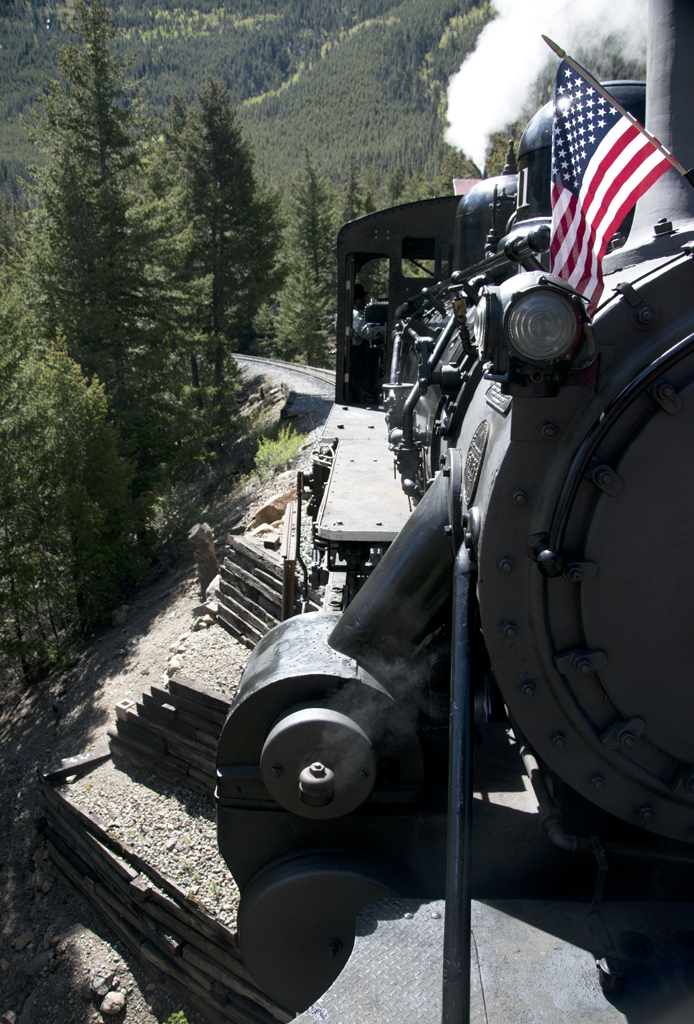 It was kind of scary looking down from there at the water below. I also have a panoramic video I shot out there.

Presently we arrived at the other depot for the Georgetown Loop, and that’s the Devil’s Gate Station in Georgetown. You can board the train at either depot for the same ticket price. We chose Silver Plume because it was closest to where we started out that day. Georgetown is actually closer to Denver. The Devil’s Gate Station has also been restored and is quite a bit more modern than the Silver Plume Depot: 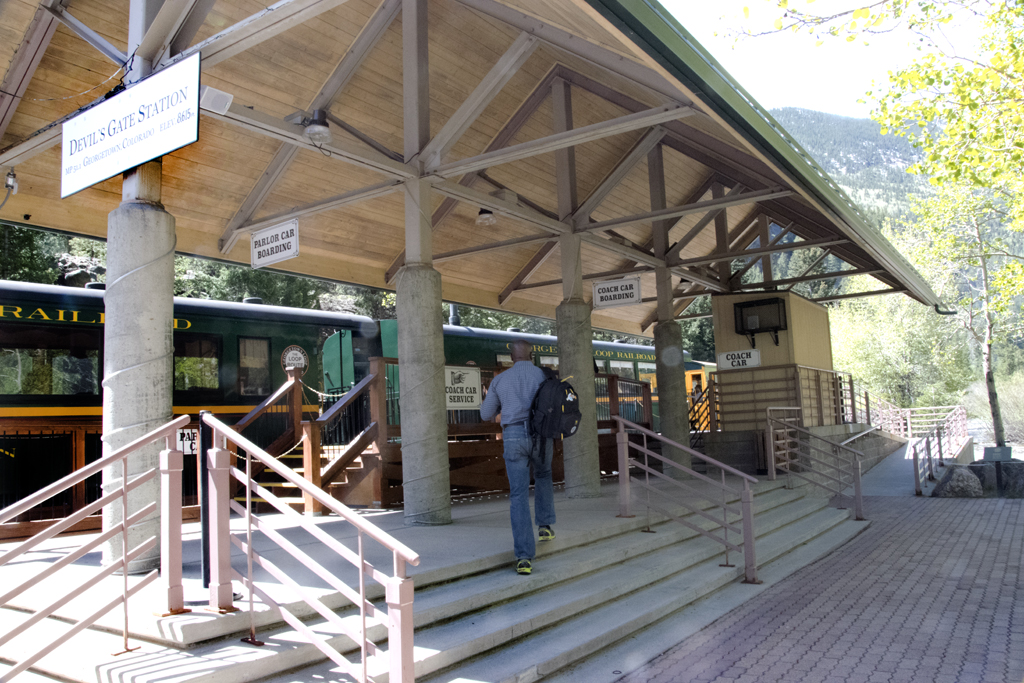 They even have Old West wanted posters in the ladies room. Apparently there are bandits in and around the trains in June! 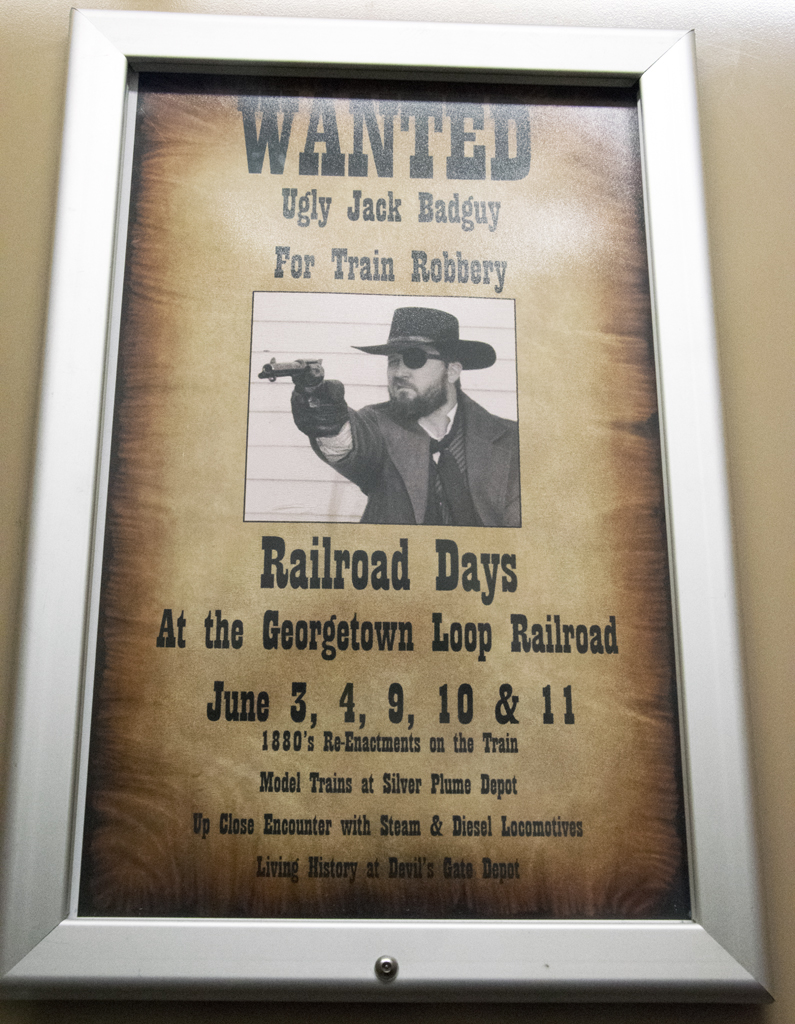 And what chance did a guy with a name like Ugly Jack Badguy have but to be a train robber?

After our stop, which was long enough for a bathroom break and a swift trip through the gift shop, we re-boarded and set out to climb back up the hill. Now the locomotive was at the other end of the train: 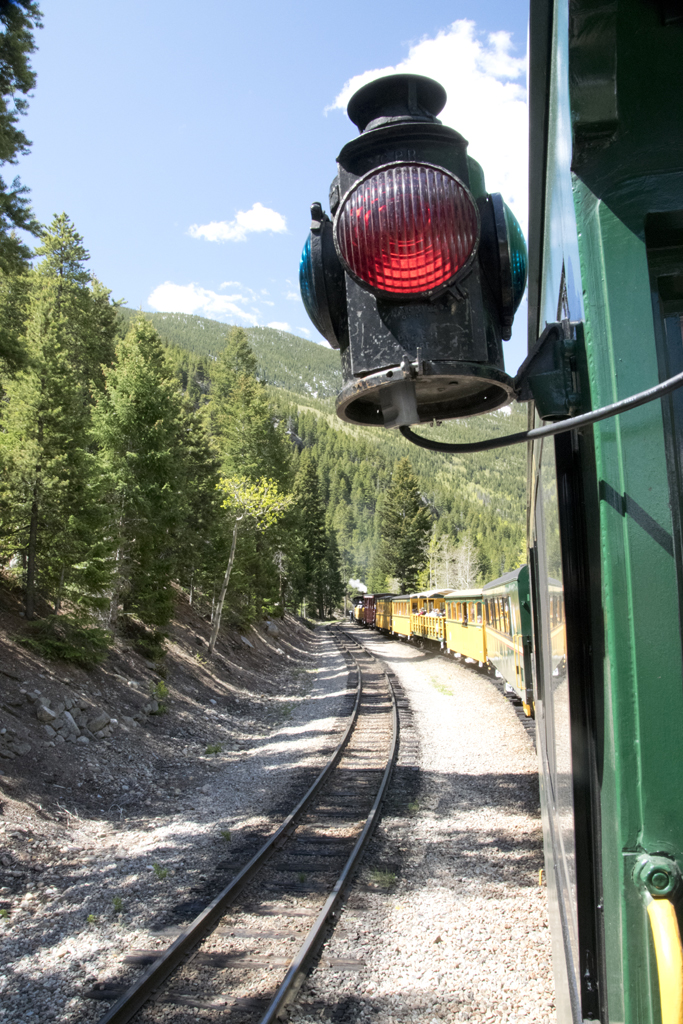 There was some drama getting started on our return journey. At one point the train began to roll backwards downhill for a few yards, gaining a startling amount of speed in just a few seconds. Suddenly it slammed to a halt, and a man that had been standing in the aisle was now lying in the aisle. He could have been seriously injured, but he was ok. I’m just glad I was sitting down.

They called up a diesel locomotive to give us a little push, and it came up to the end of our car where Old Number 111 had been. It more-or-less gently gave us a shove and the steam locomotive was able to take it from there.

We reached the Silver Plume Depot without further incident, except lots of gorgeous mountain scenery and friendly folks. We even saw a real beaver dam. Our snacks were good, the drinks were cold and we made it back to the car very satisfied.

I would highly recommend this excursion. It’s just a daytrip outside of Denver and well worth the effort. Our tickets were about $36 per adult; kids are less, seniors are less and coach cars are less. I loved the sound of the old steam engine and the experience of chugging along an old mine train route. And you can’t beat the vistas! 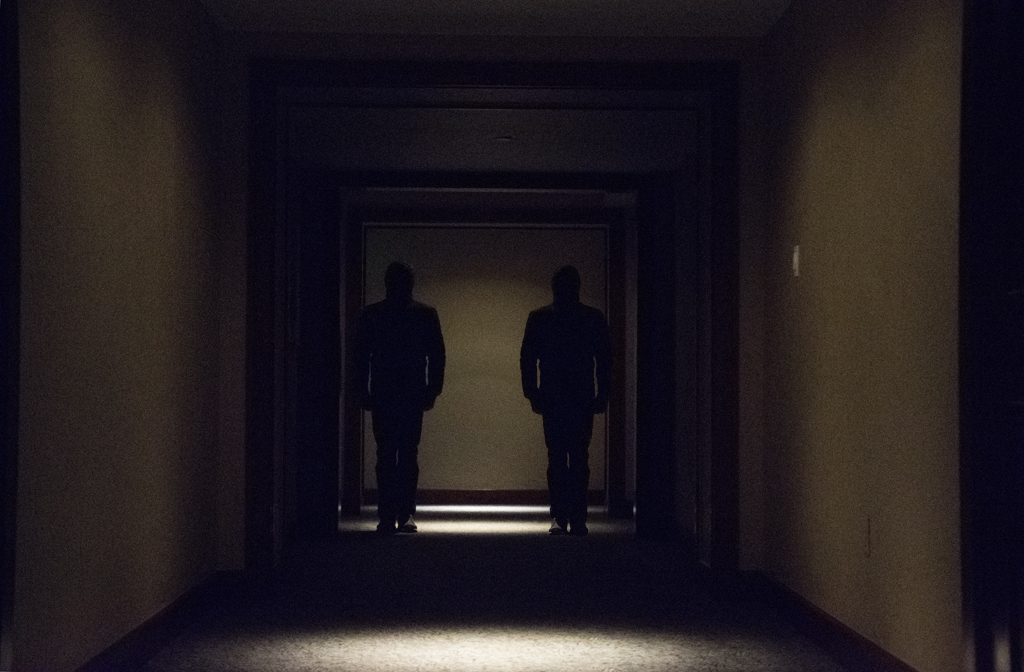