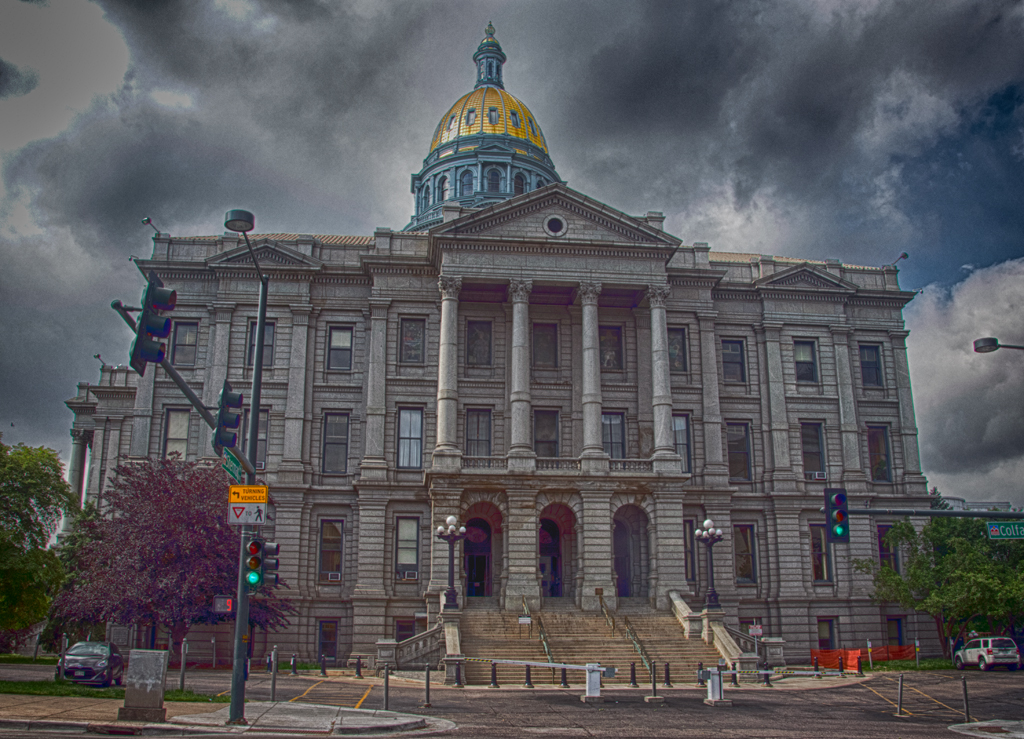 Reminder: only 21 more days til the end of my summer book sale!

Latest offer – just added: get a signed copy of A Travel for Taste – Germany (my best seller) for only $21.95, including shipping. That’s the same as Amazon’s price before they add shipping, and this one is autographed. PLUS for an additional $5.00, I’ll write a personal message above my signature (up to 10 words, including “To” + name). Great gifts for cooks, photographers, nerds, and the weirdly-humored!

Don’t miss this opportunity! These are signed copies, people!

I posted a good picture of Colorado’s Capitol building in the post where I described my first outing as a resident with my husband back in April. I also posted my stunning HDR shot of the building in a post about the visit we made in 2016:

Also, I referred to the same neighborhood in my post about the food trucks downtown as well. So you should know the area, right?

On my most recent visit to the capitol building, I actually went inside and got some great photos of the shiny, shiny surfaces! My friend Rita was visiting from Florida in June and we trekked downtown to see the Botanical Garden. However, it was SO COLD that day that we diverted to the capitol instead – or, on our way to the food trucks!

So, the Colorado State capitol building (see what I did there?) opened in 1894, eight years after Colorado become the 38th state. It was designed by architect Elijah E. Myers, who modeled it after the US Capitol in DC.

Its most famous feature is on the front steps, where “ONE MILE ABOVE SEA LEVEL” is inscribed on the 15th step. BTW, the steps are native Colorado rock. The altitude measurement was taken before the first marker was installed there in 1909. However, that marker was stolen, along with a few others over the years, until they finally inscribed the phrase into the step itself. 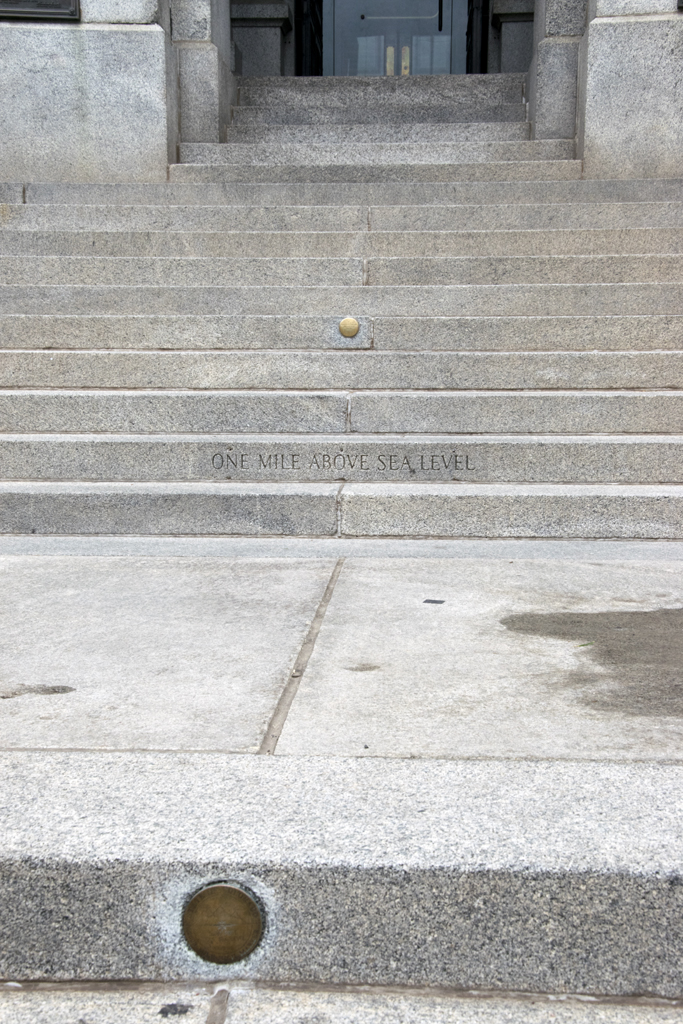 In the photo above, you can see a very well-worn marker on the 18th step. That marker was the mile-high elevation measured with 1969 technology. Finally, you can see a third marker, installed on the 13th step in 2003, using the latest technology of that year. Makes me wonder how many markers will eventually be on those steps!

Visitors don’t enter through the illustrious front steps, though. We have to go around to the side and enter through the basement. Here’s a pic of Rita at that door, looking none too pleased about it (note her jacket – told you it was cold that day)! 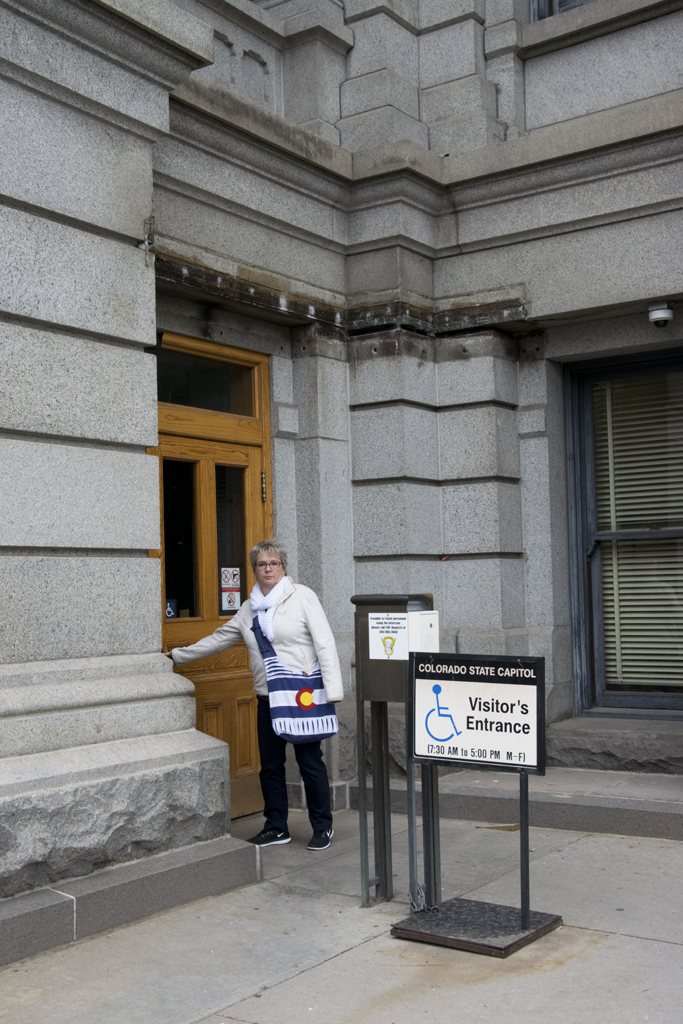 But once inside we forgot all about the servants’ entrance. It was all so very SHINY! I’ve never seen so much brass in my entire life, especially not shined to a glow the way it all was. Wow! There are many stories and we could just walk around without supervision. There were also large balconies and balustrades in each story to allow observing several different floors at once. It was a little dizzying. 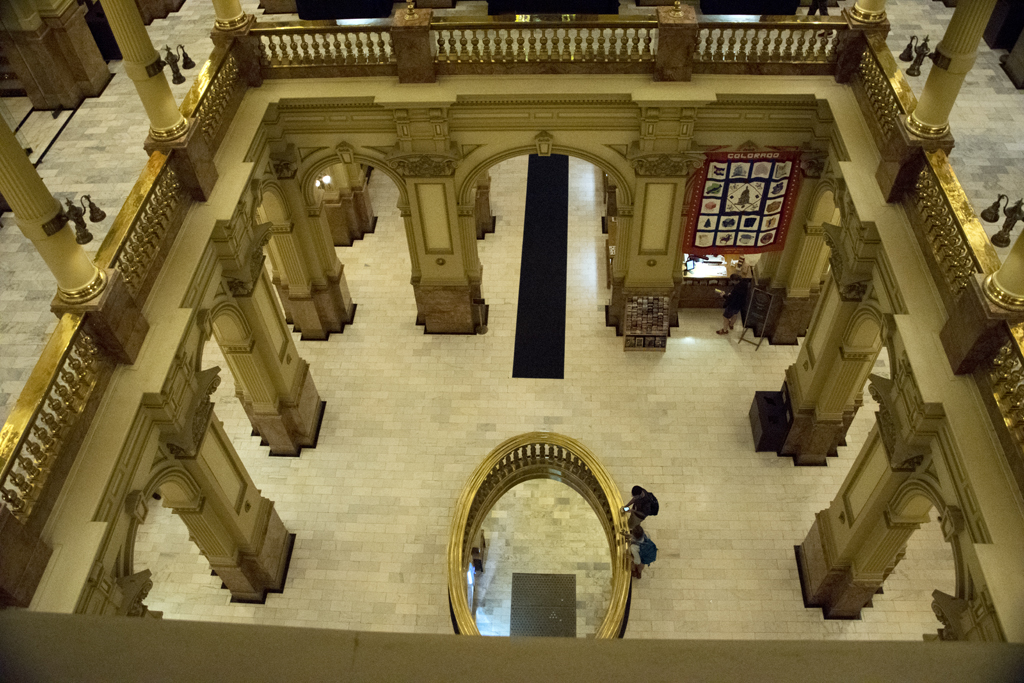 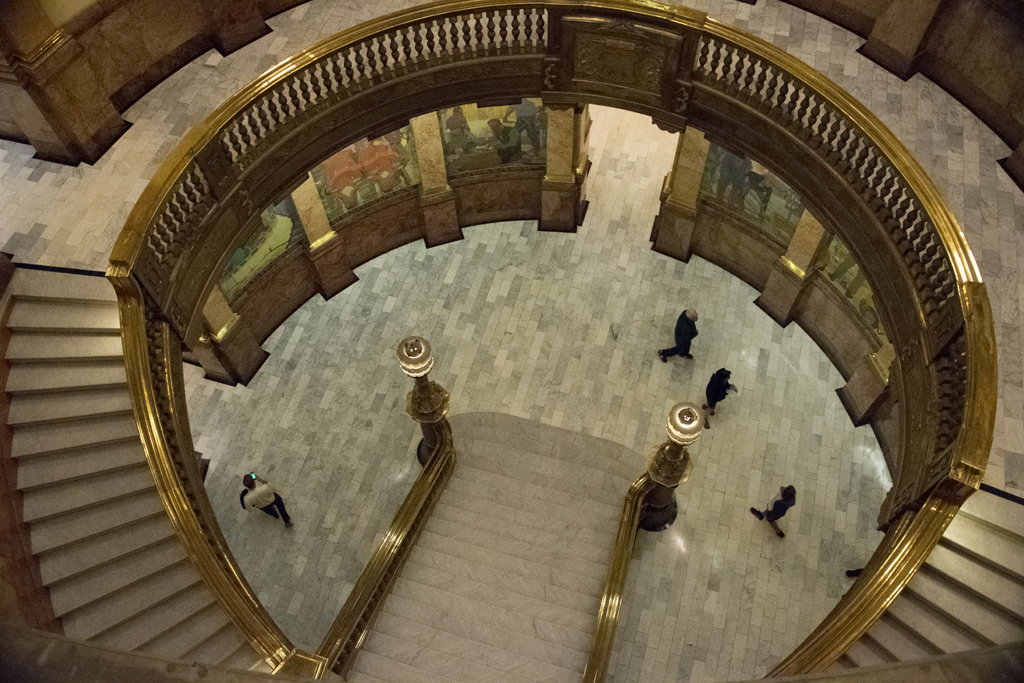 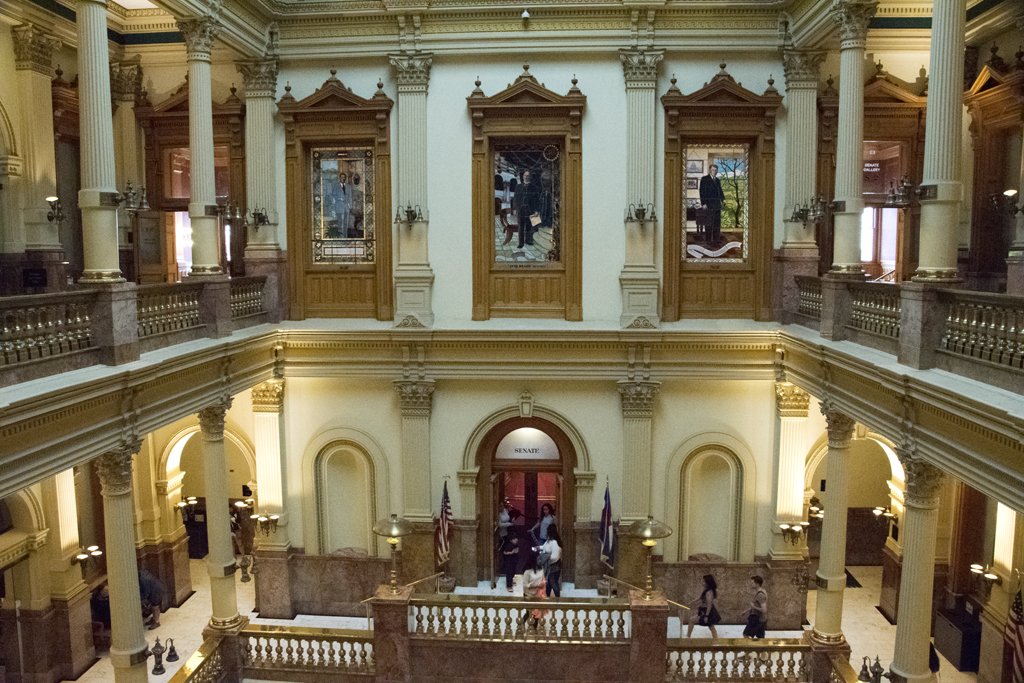 There’s a hall of presidents on the third level: 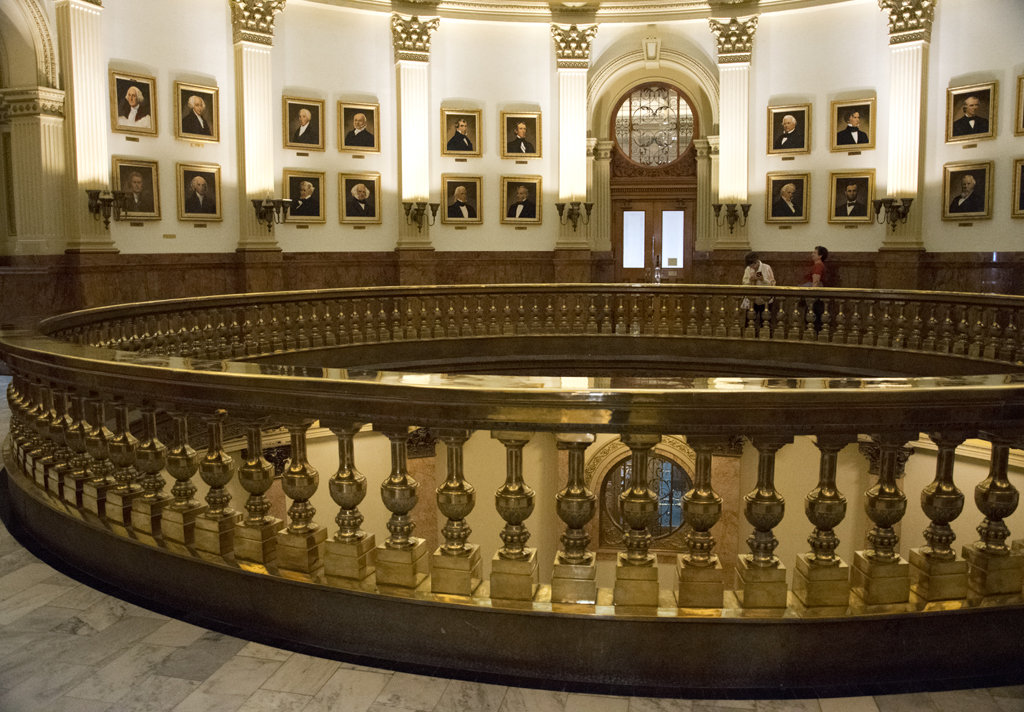 Even the elevators looked like something out of a museum exhibit: 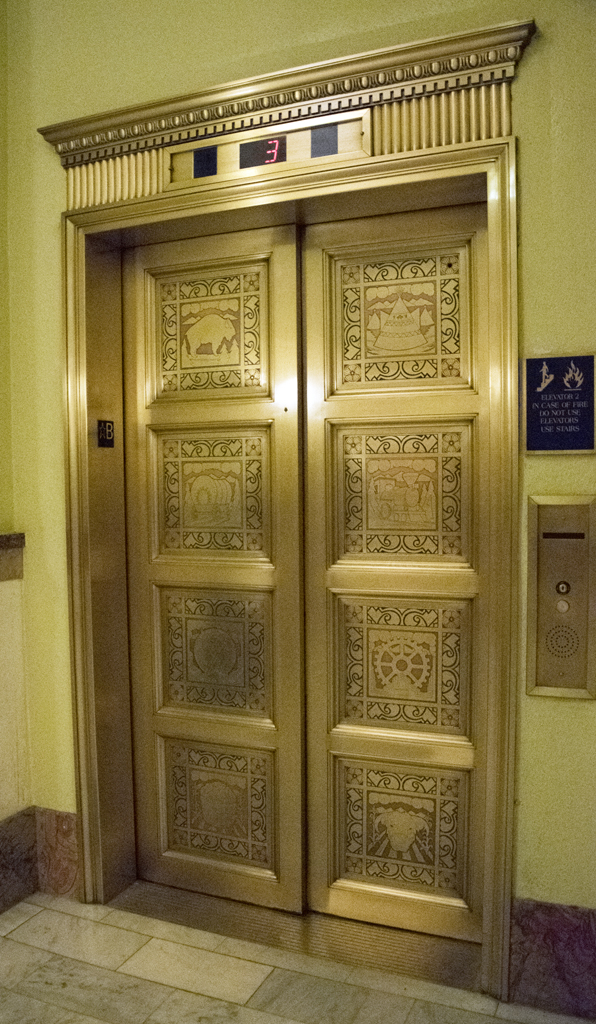 And who wouldn’t feel luxurious with water fountains like this? 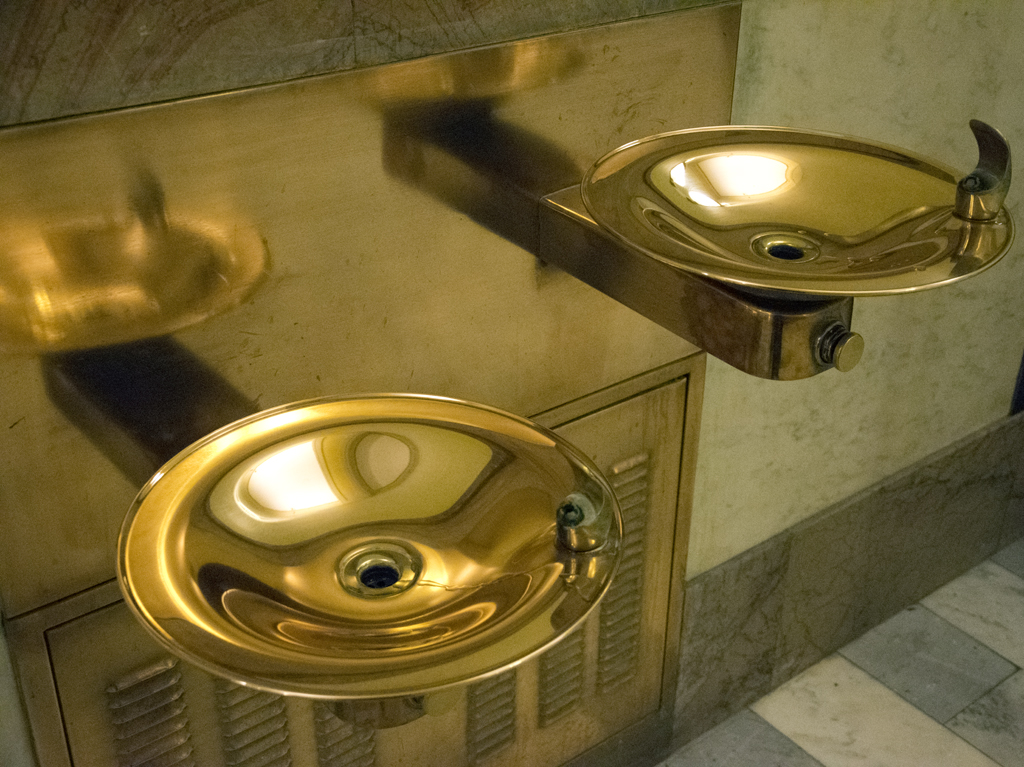 I wonder how many people polish all this brass and how often? 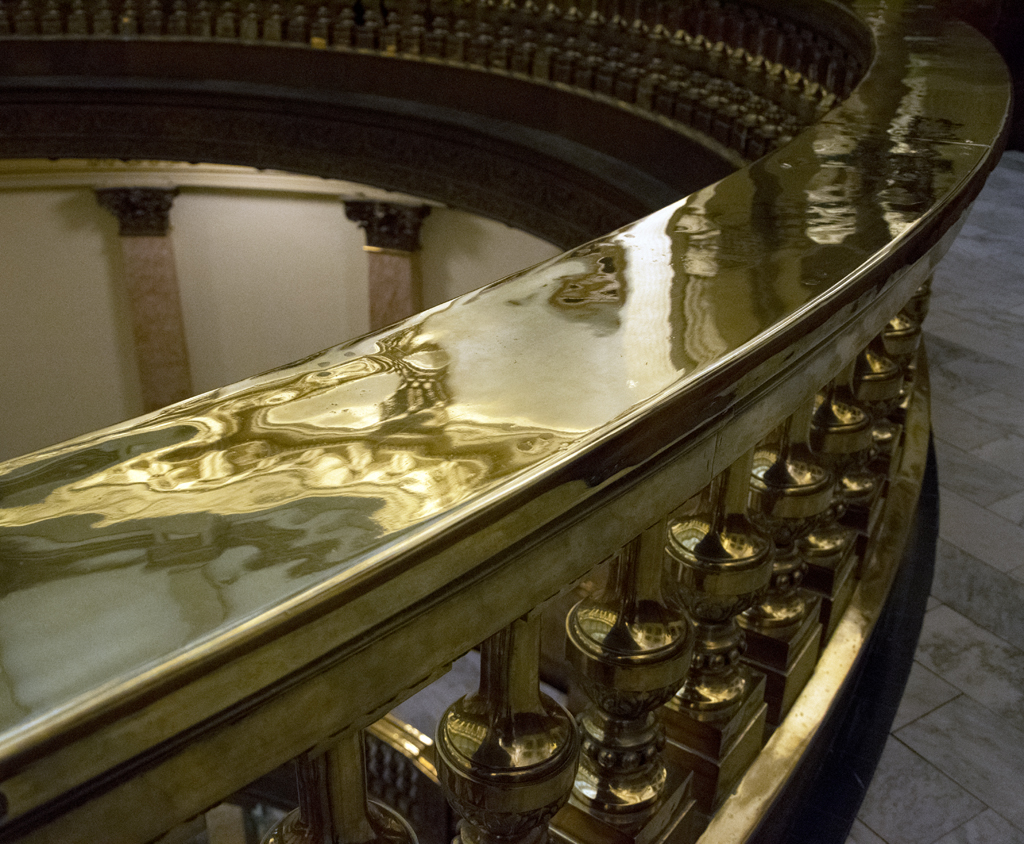 The main entrance hall is about 18 stories high, going all the way up to the dome: 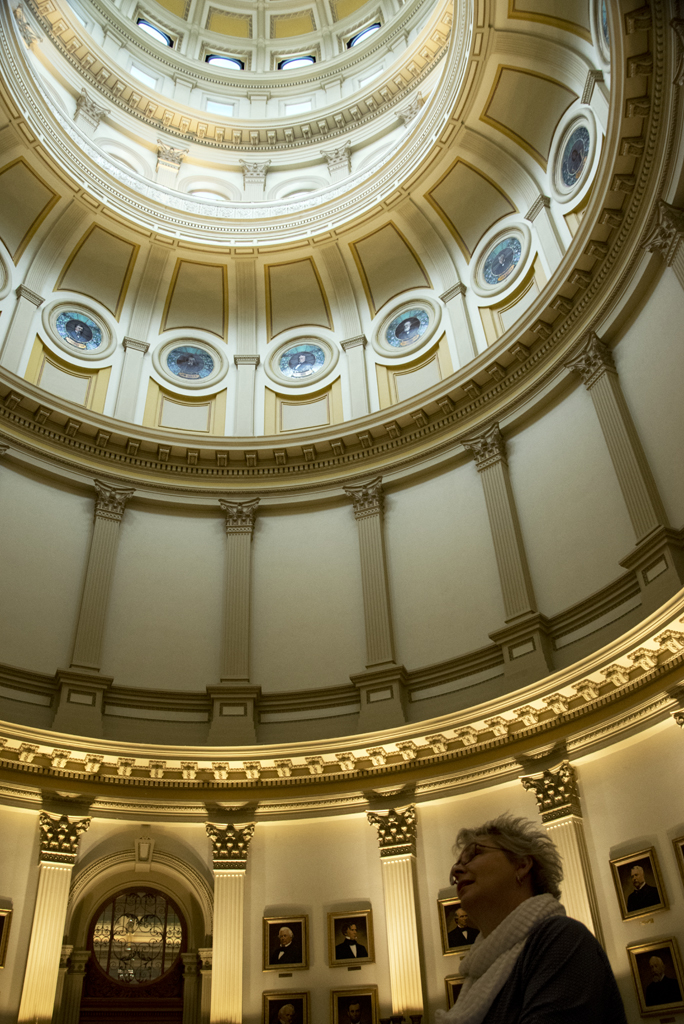 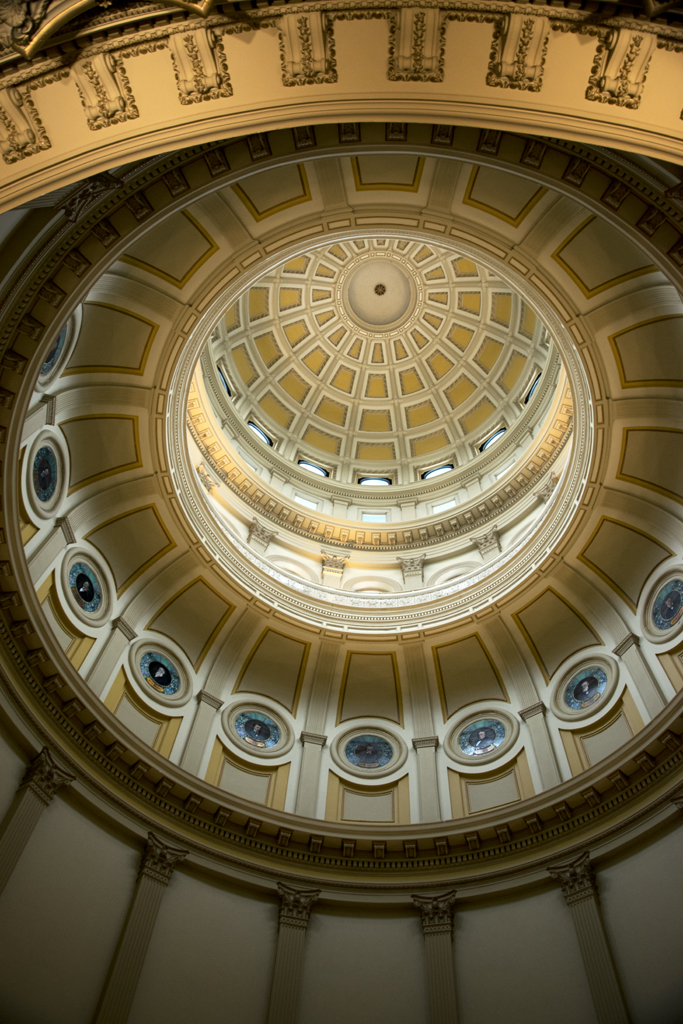 The exterior of the dome was designed to be gold, but it was actually built of copper panels in the beginning. I think the copper was from Colorado, too. In 1908 it was gilded for the first time. Gold leaf was reapplied in 1950, 1980 and 1991. Guess where the gold comes from?

If you take the free guided tour, you can go up into the dome, but by the time we learned of this tour, we were almost all the way through the building and didn’t feel like going all the way back downstairs to climb all the way back up just to see the dome. Plus we’d have had to listen to a tour guide for about an hour to boot. We were hungry. We wanted food trucks!

Anyway, you may have noticed stained glass panels in one of the photos above. There are lots of them and they depict important people and events in Colorado history. 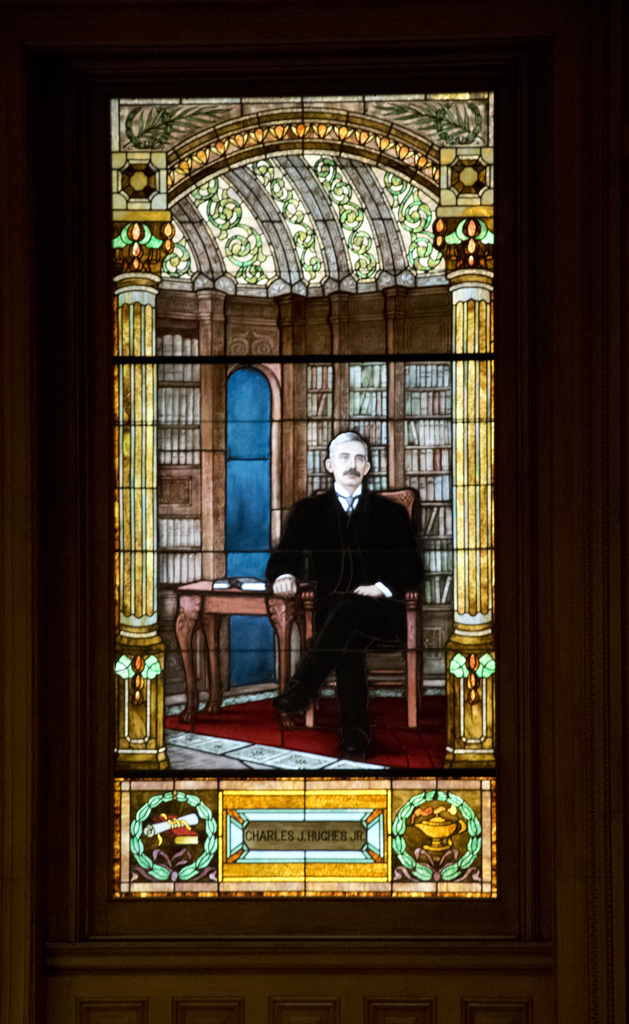 On the top floor that people without tour guides are allowed to see is something called Mr. Brown’s attic. Mr. Brown refers to Henry Brown, who donated the land for the capitol. In the attic are many exhibits and displays about Colorado history and the capitol. I felt like I was on a school field trip, something I love! 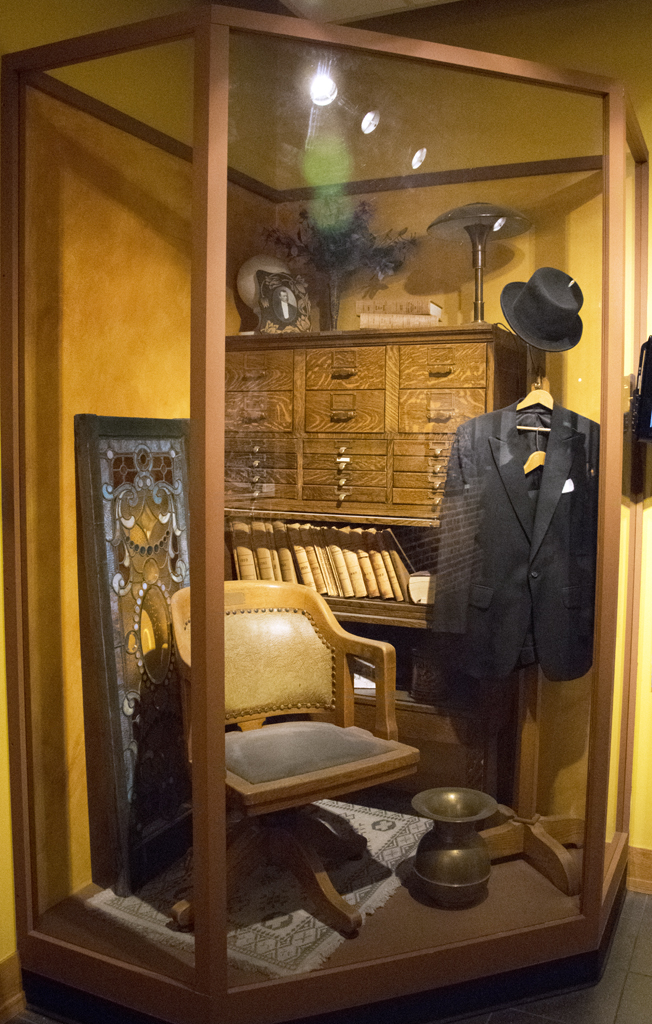 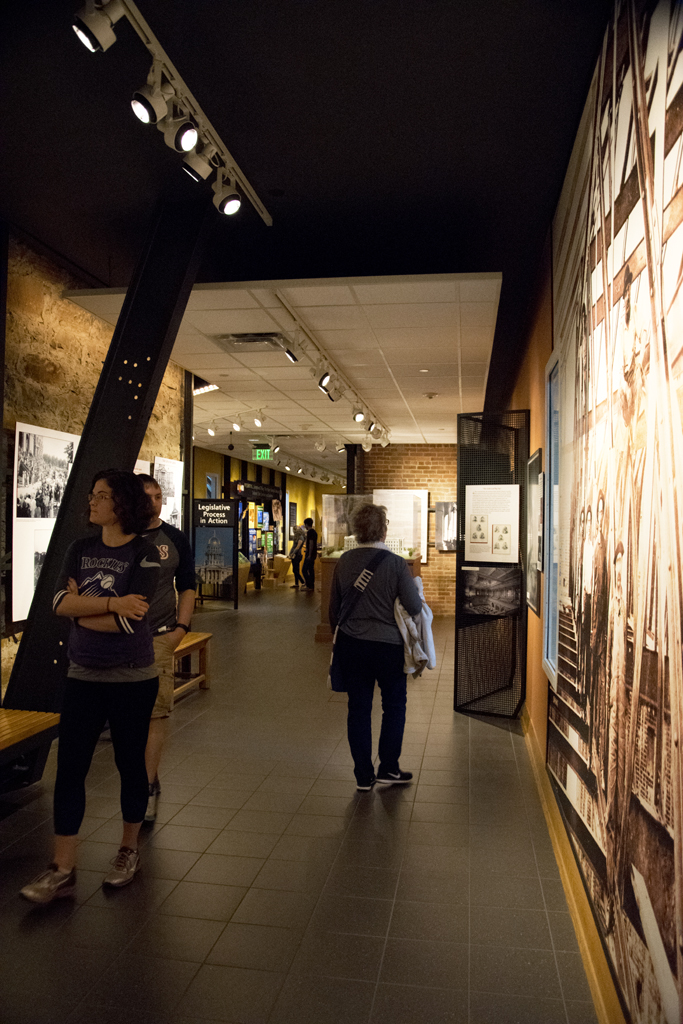 And I took this shot of the innards of the building through a little window up there: 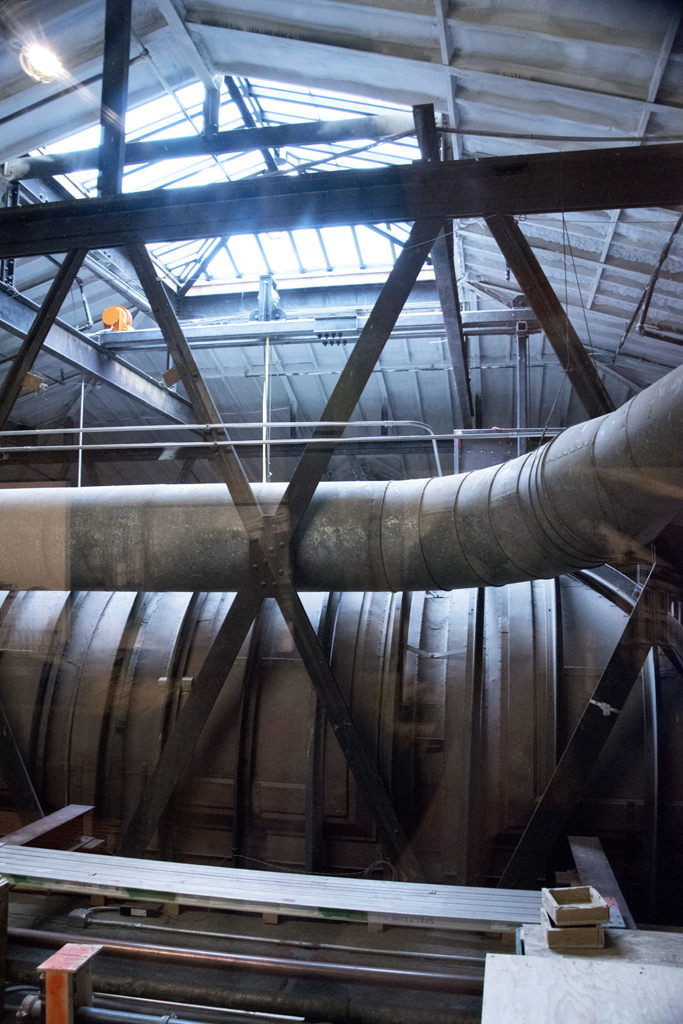 Next time I’m doing the free tour, though, not only because I will be able to go up to the dome. But also because the outdoor observation deck will re-open in October after eight years of being closed. Apparently part of the cast-iron skeleton of the dome broke off and fell onto the deck a few years ago. No one was hurt, but they closed it to renovate it. Renovation is almost complete, and they have even applied another gold leaf skin to the dome, which explains why it’s so very shiny on the outside, too! There are 65 ounces of Colorado gold (what else?) that were hammered into leaf in Italy then shipped back and applied to the dome. The gold, processing and shipping were all donated by a mining company.

A few more facts about this great structure:

We saw the legislative chambers. Here’s the senate chamber: 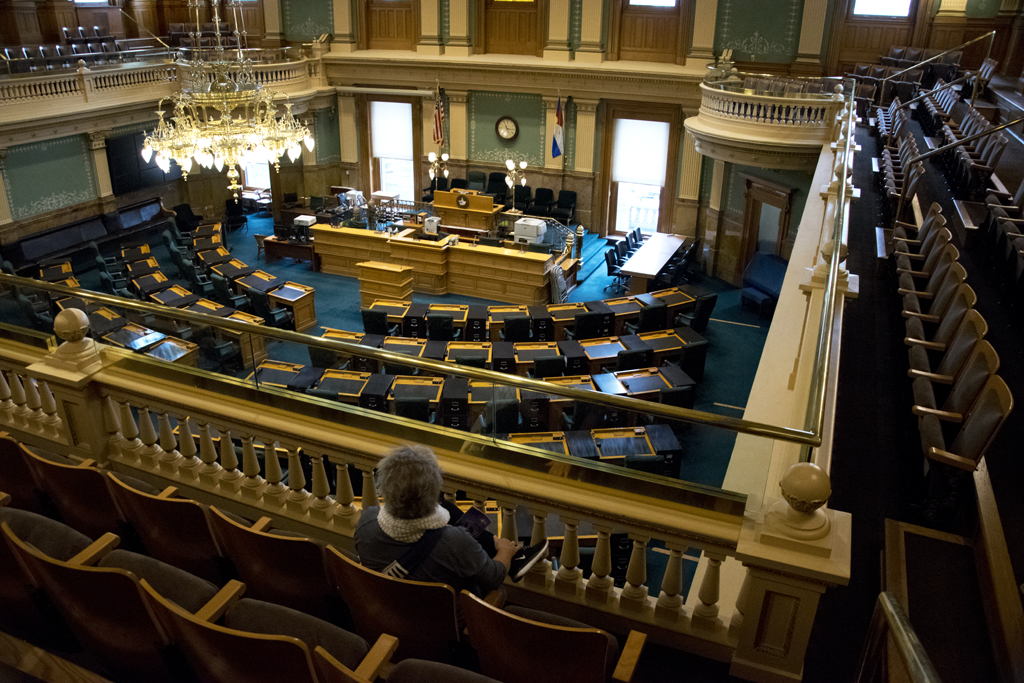 The house chamber was almost identical except for the color and stained-lass panels. Both had this stunning chandelier hung from the atrium: 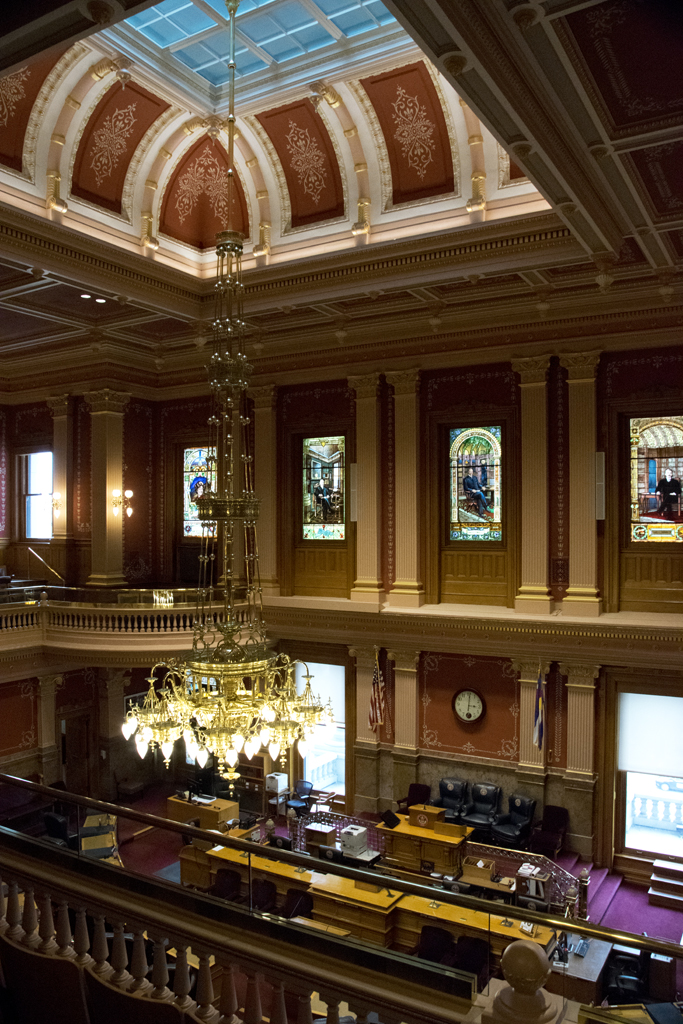 There were so many other things and I had to weed out lots of photos so this post wouldn’t be longer than you wanted to see. I was really impressed at the grandeur of this place. Can you tell?

I recommend not only taking your touristy picture at “ONE MILE ABOVE SEA LEVEL”, but also going around back to the visitor entrance and checking out the interior. You won’t be disappointed! Get in on that free tour as well, now that I told you about it. 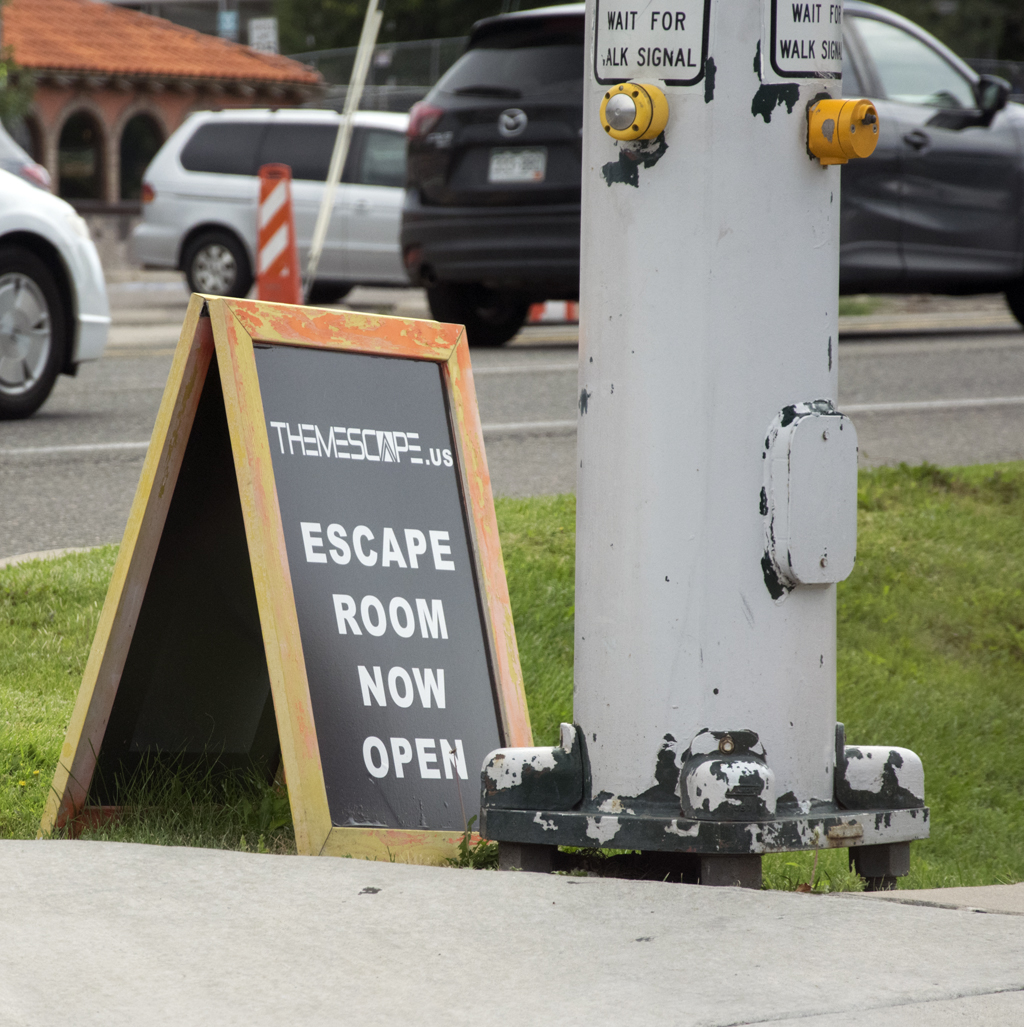