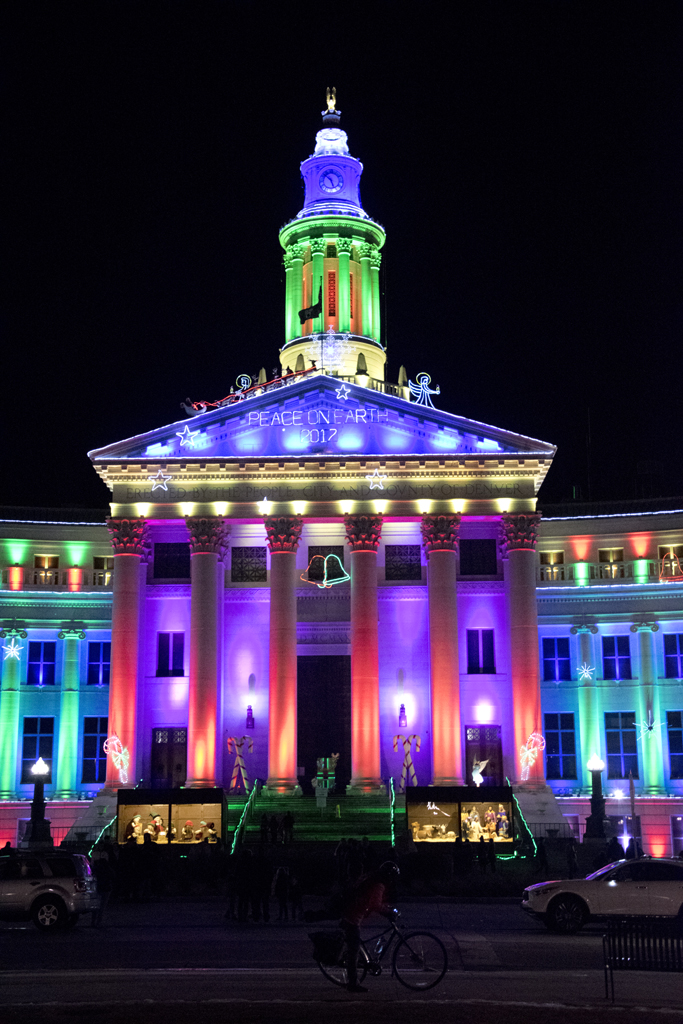 Well, I thought I was done with holiday posts for 2017 until I saw the Denver City and County Building’s light display last weekend. It has a reputation for being a must-see holiday experience. Since the lights are on display from Black Friday until the end of the year, my husband suggested we check out the show before it was over.

We went down on Friday afternoon on the train. It gets dark at 4:30 here now, so it was night by the time we arrived. The City and County Building is a neoclassical building dating from 1932, directly west of the Capitol building. There is a huge Civic Center Park in between, which is where I lunched at the food-truck gathering back in the summer.

When we arrived, it was still dusk, and I got this photo of Santa’s sleigh atop the building with some dark angels: 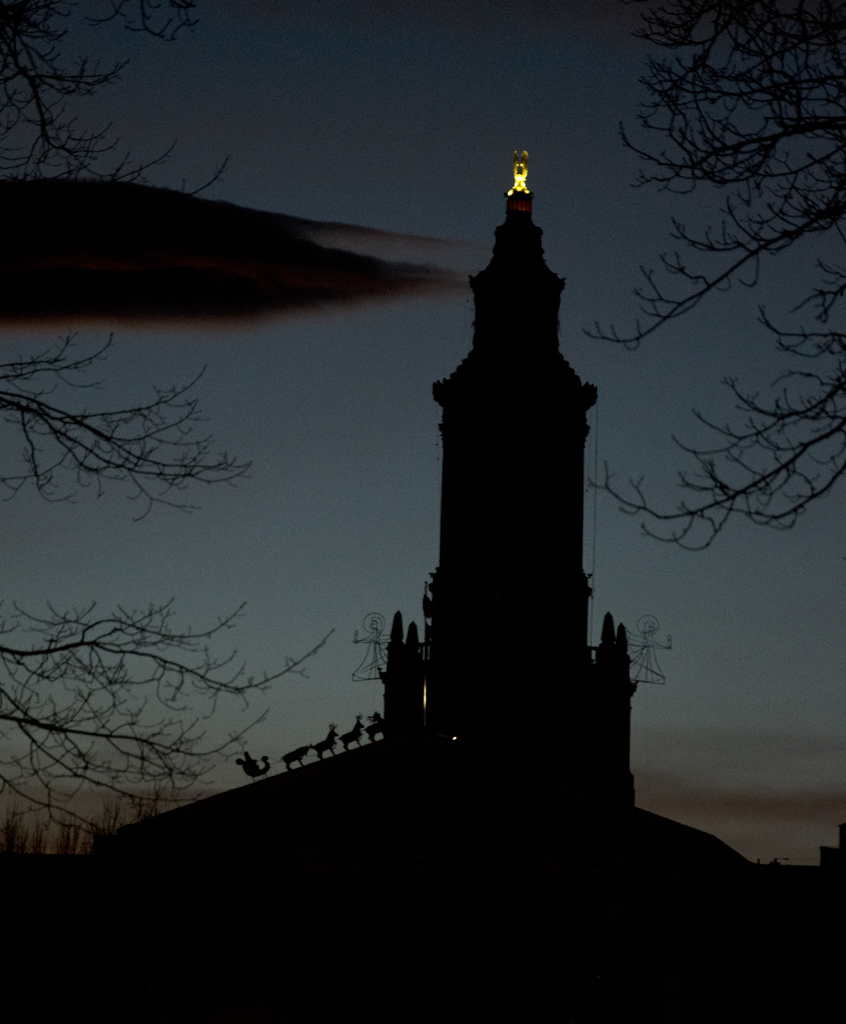 However, the building stayed completely dark except for a few street lamps and a couple of office lights.

We began to wonder if we’d missed it completely and would have to wait til next year. But more people were arriving so we hung around the park area for a while. We were rewarded when, at 5:30 pm, a very loud voice announced that the light show would start in half an hour. After a few more announcements, the show began at 6:00 pm. Here’s a video I shot of the first song they played:

Of course, the video doesn’t do it justice. It’s so impressive in person!

The music and flashing lights went on for about six minutes or so, which means I have a couple hundred still photos of the rest of the show. But you get the idea from the video above. It was more of the same, and towards the end, lighted stars and bells appeared. Once the music ended, the lights stayed in a really beautiful, colorful pattern.

I’ll spare you the hundreds of still shots, but we walked up to the building after the music ended and I did some closer-ups (see Santa and the angels lighted now?):

Note the elf scene on the left and the Nativity on the right in boxes on the steps. Here they are close up:

I read there are over 600,000 lights on the building. It must be some heckuva computer setup to produce this! 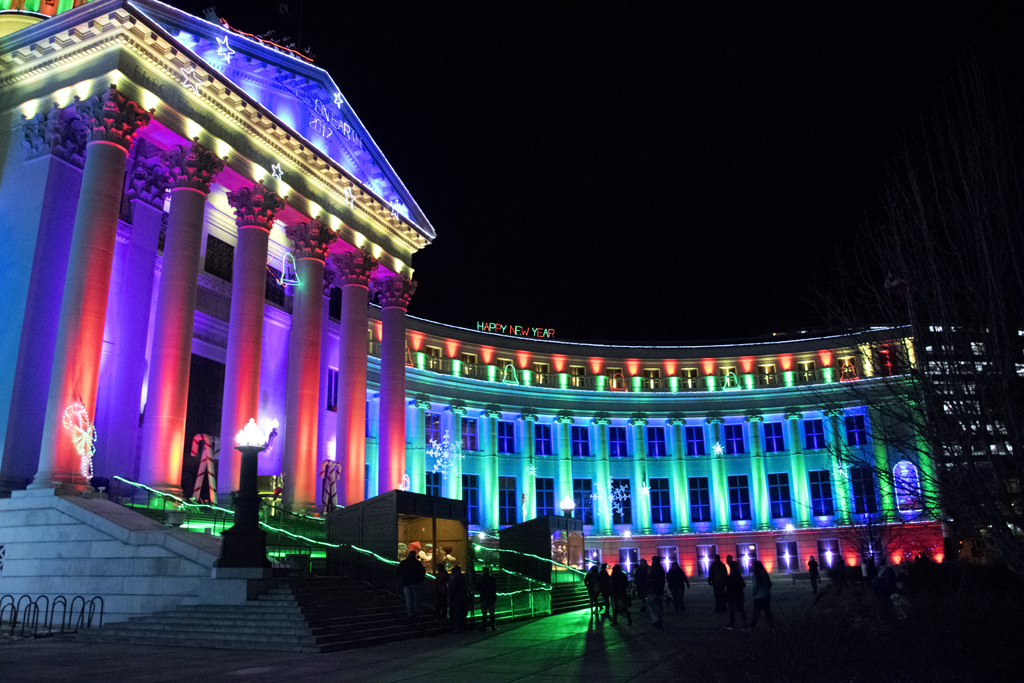 The city of Denver occupies parts of three or four counties, the central county being named Denver. Hence the name of this building: Denver City and County Building. Lots of people also call it the courthouse or city hall. 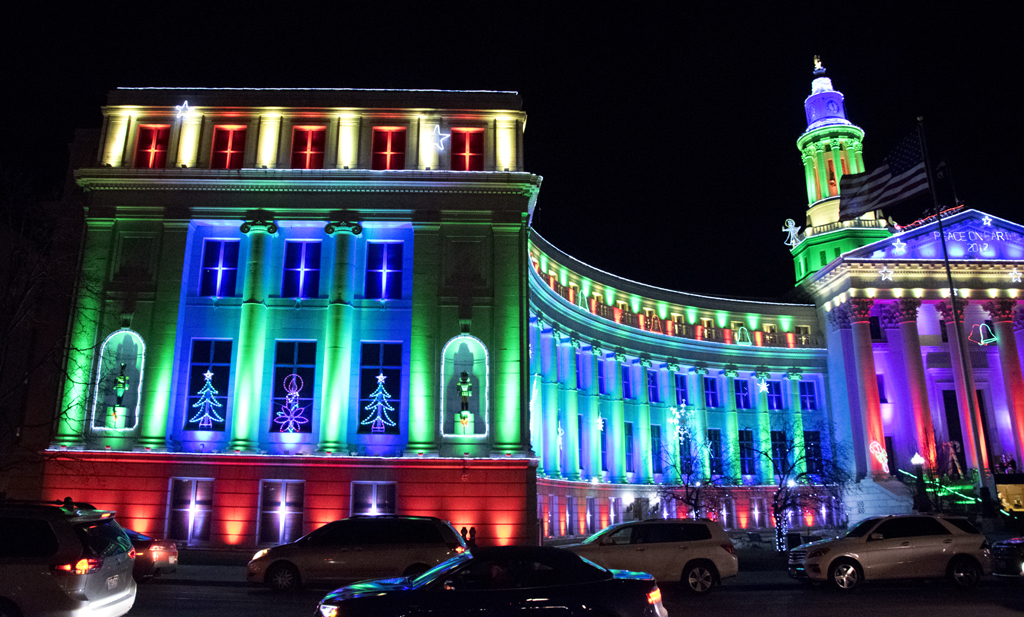 I’m glad we went to see this after Christmas when there were no crowds. Makes for a better experience – and better photos. 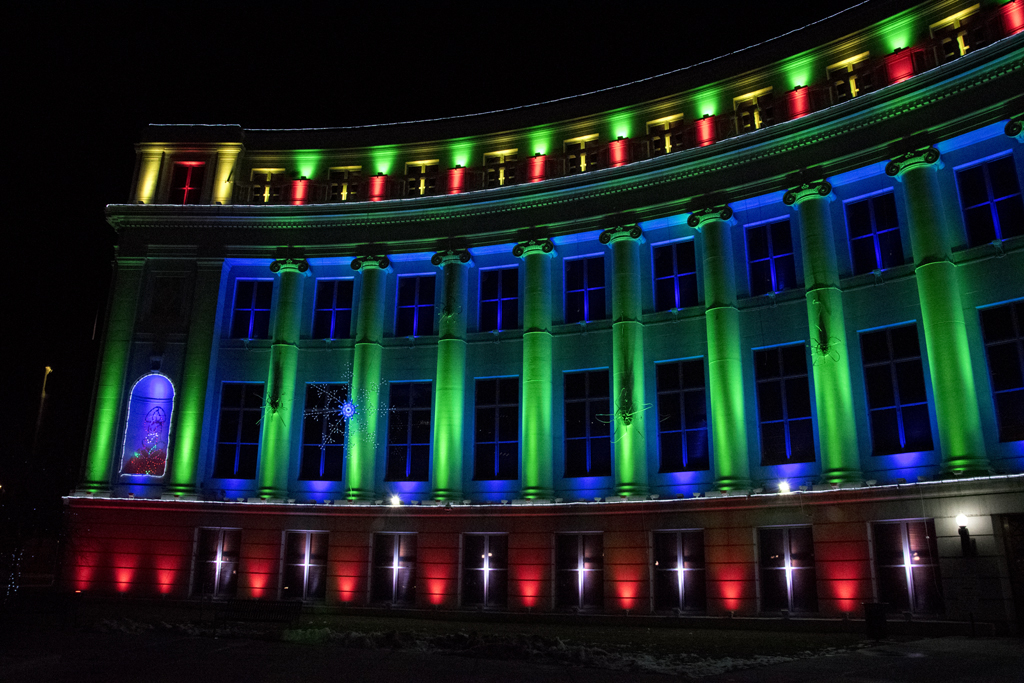 It was breezy and getting quite cold, so we didn’t stay downtown for long after that. But I was very glad to have experienced this spectacular light show before having to wait another year. In addition, I discovered you can take a tour of the building for free and see the Mayor’s office, etc. That’s been added to my list, of course.