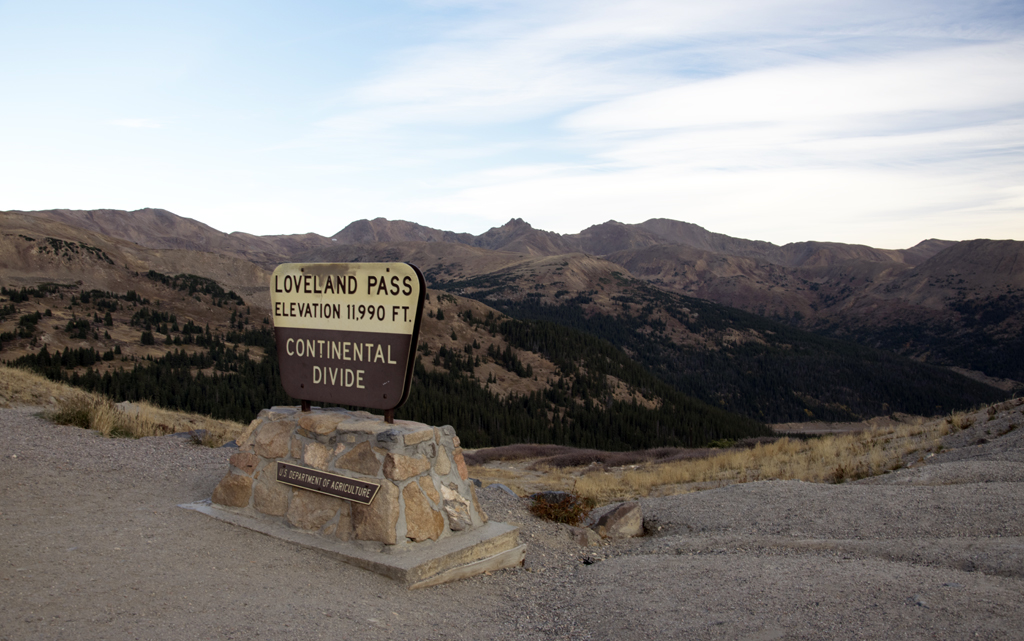 At the risk of repeating myself, this post is about visiting yet another Continental Divide spot in the Rockies: Loveland Pass! I hope you’ve seen my post about visiting Cameron Pass and Independence Pass in the past few months. And I’ve also mentioned crossing the Divide on Trail Ridge High Point in Rocky Mountain National Park – but I was behind the (white-knuckled) wheel for that one and don’t have the pictures to prove it. FYI, that one is the highest one listed for Colorado for an ‘improved road’ passage.

Anyway, compared to the others, Loveland Pass seemed, dare I say, pretty tame by comparison. At least, I didn’t have quite as big of a panic as I had previously. I mean to say, the road wasn’t as scary climbing up to it. Either that, or I’m just getting used to it.

My husband and I were on our way to take our bikes to Dillon Lake for a jaunt. I scheduled in Loveland Pass as a detour on the way up. We took I-70, which is the main thoroughfare through the mountains from here. However, before reaching Dillon via the interstate, we took a detour onto Colorado Highway 6, which loops around through the Pass and back to the interstate near Dillon. 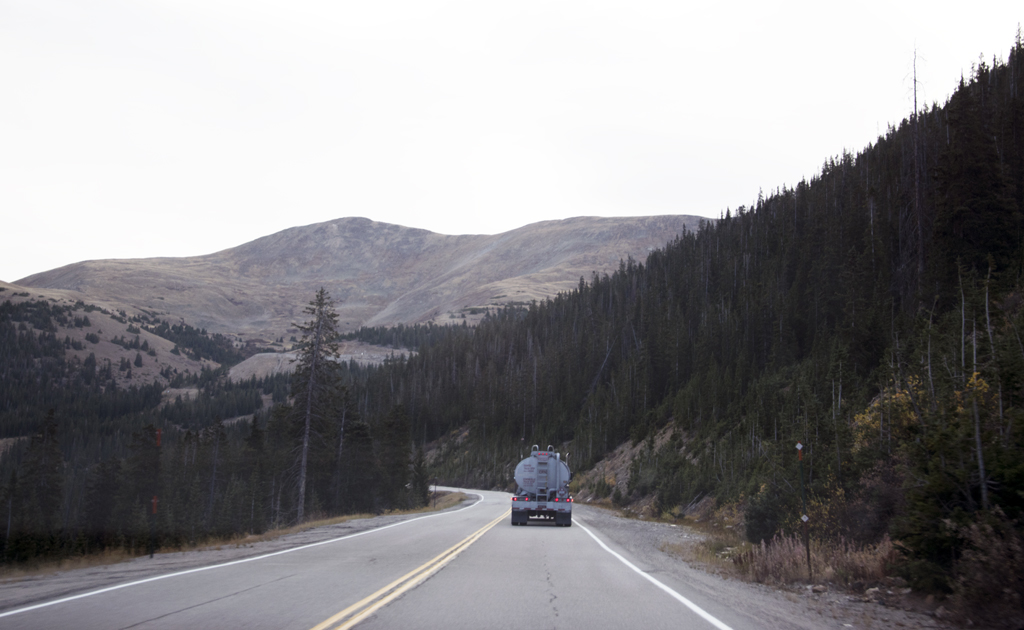 Note that haz-mat vehicles must use Highway 6 because they are not allowed in the tunnels on I-70. The road runs 800 feet above the tunnels. And this road is the highest mountain pass road in Colorado that stays open during the winter, though it’s pretty treacherous, I would imagine. Sometimes it’s closed because of a blizzard, so all the haz-mat trucks get to use the tunnel then.

The Loveland Ski Area northwest of the pass is a big draw for backcountry skiers, and we saw plenty of downhill ski slopes, too. The resorts were obviously gearing up for the season. A couple of slopes had artificial snow laid down already. 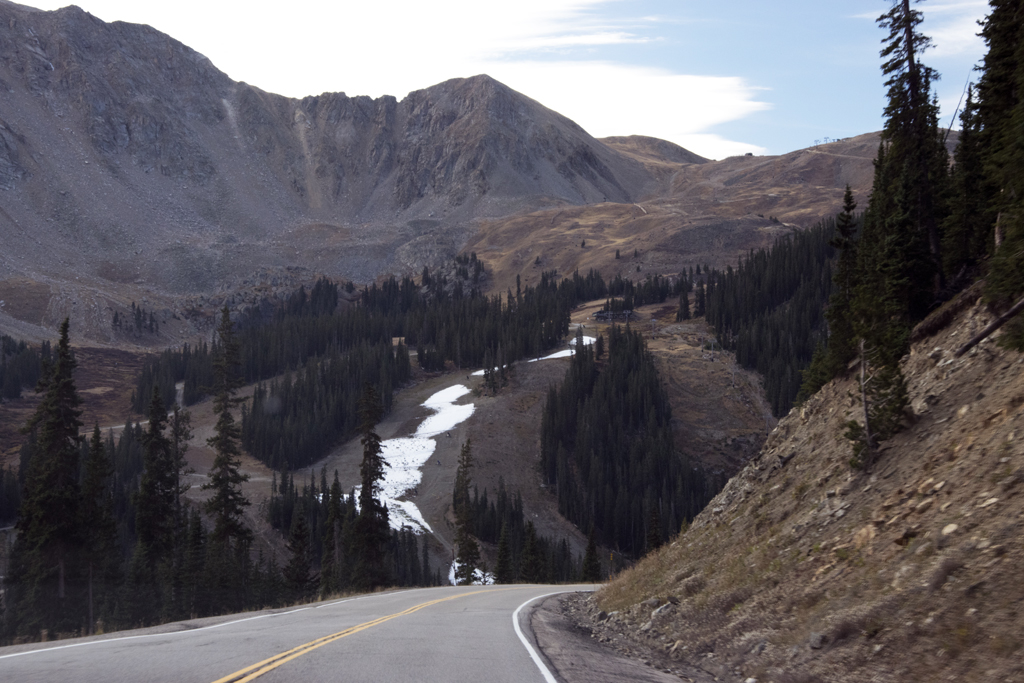 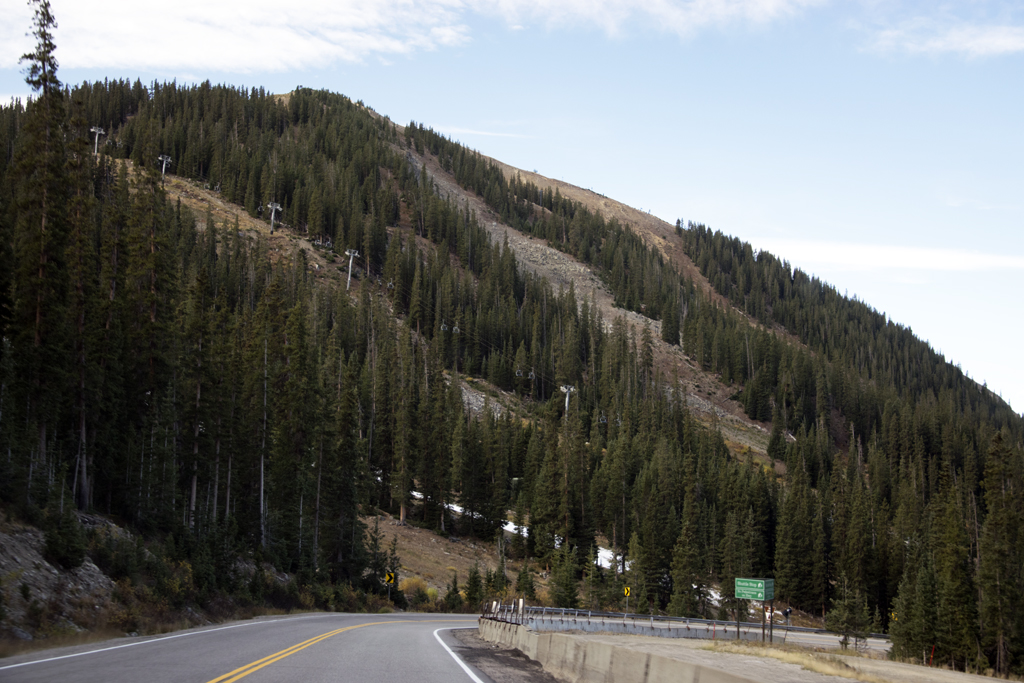 And then we cruised above the treeline once again: 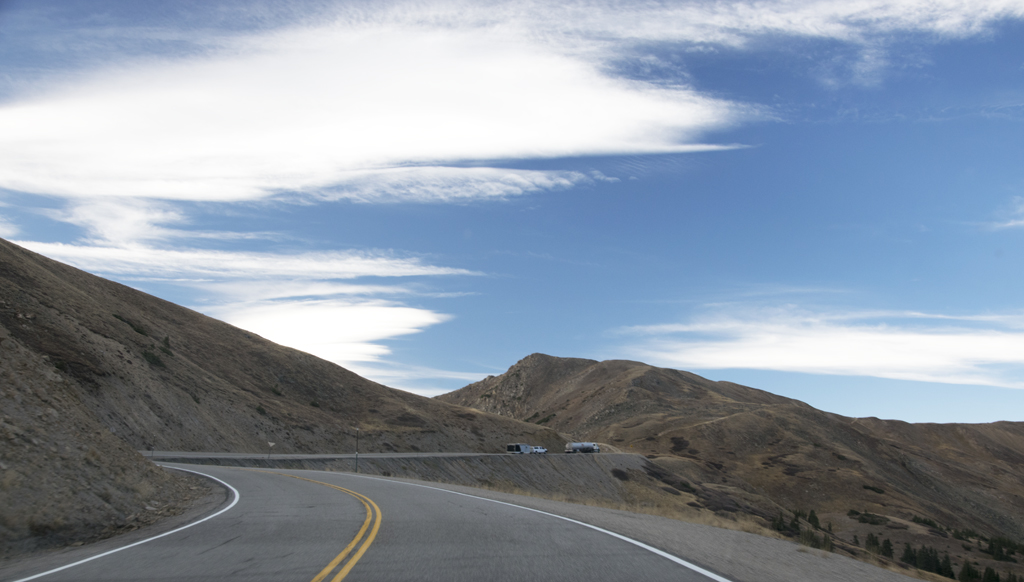 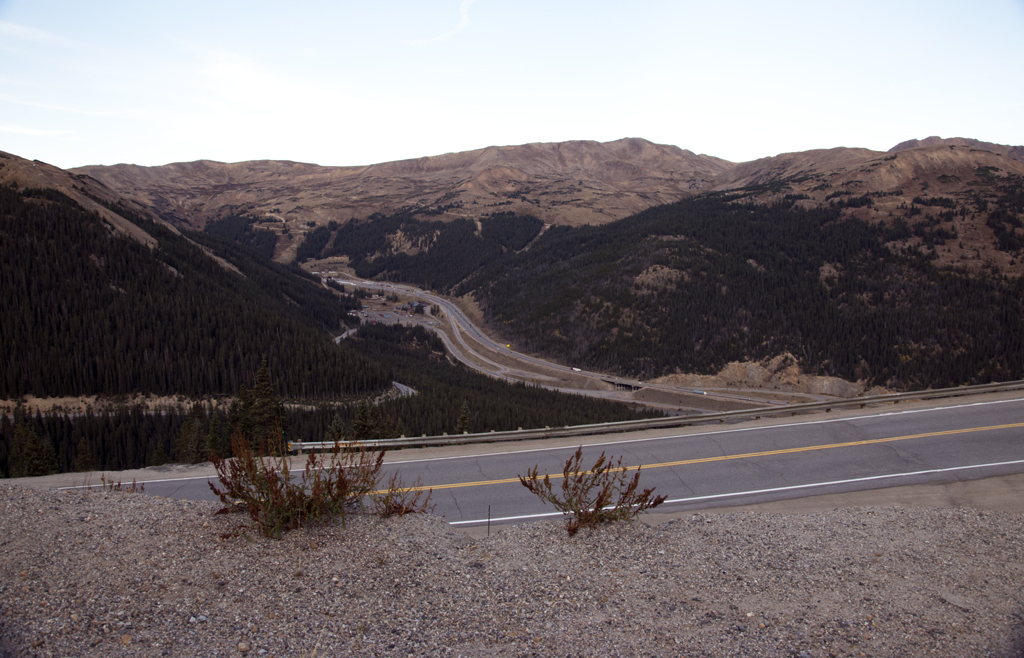 Presently we found ourselves at the pass. I still think those marker signs look like postcards from the 50s.

The pass is named for William A.H. Loveland, who was president of the Colorado Central Railroad. He lived in Golden in the late 1800s. The city of Loveland, probably about 100 miles northeast of this pass (and home of one of my favorite restaurants), is also named for this guy. 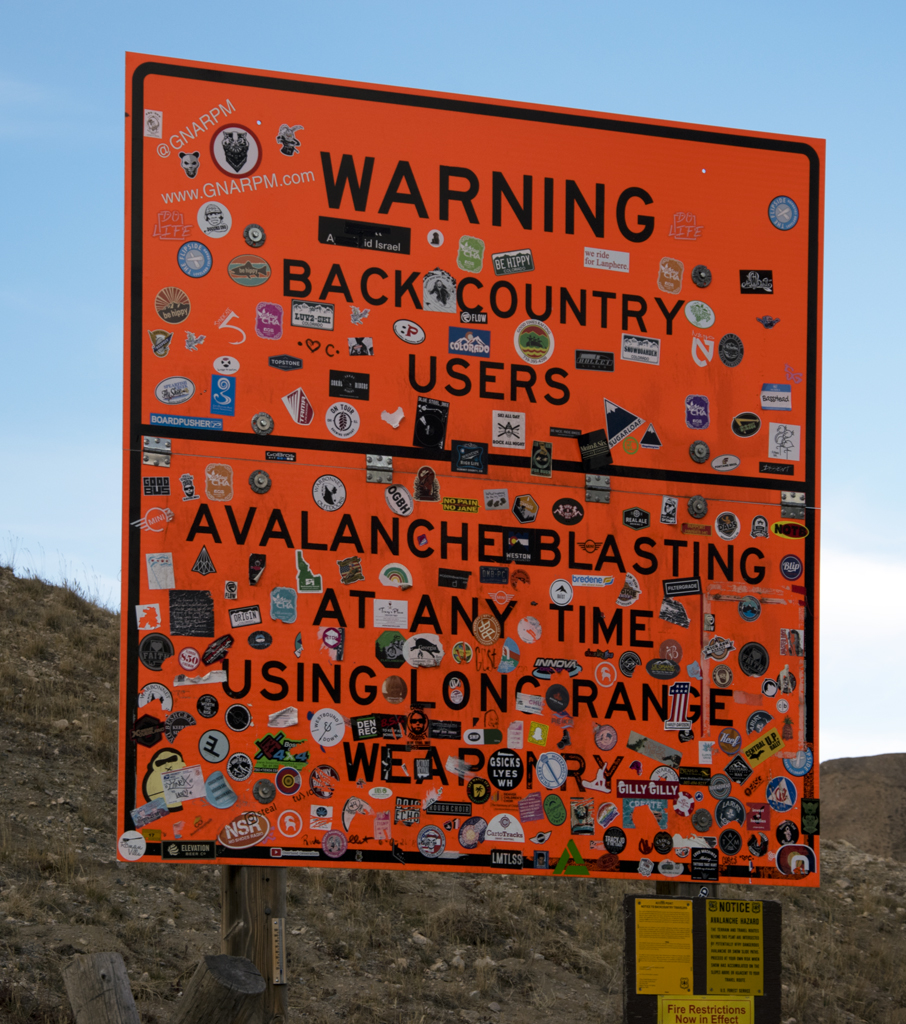 I appreciate the warning, and I didn’t know they used “long range weaponry” for avalanches. In 2013 there was an avalanche in the area that killed five snowboarders, so it’s serious preventative maintenance.

I’m intrigued by the fact that the sign is a sticker magnet. I didn’t add one of my own that day, but I did notice there was a MINI sticker on it already. Rock on!

Next to the signs was a hill you could climb: 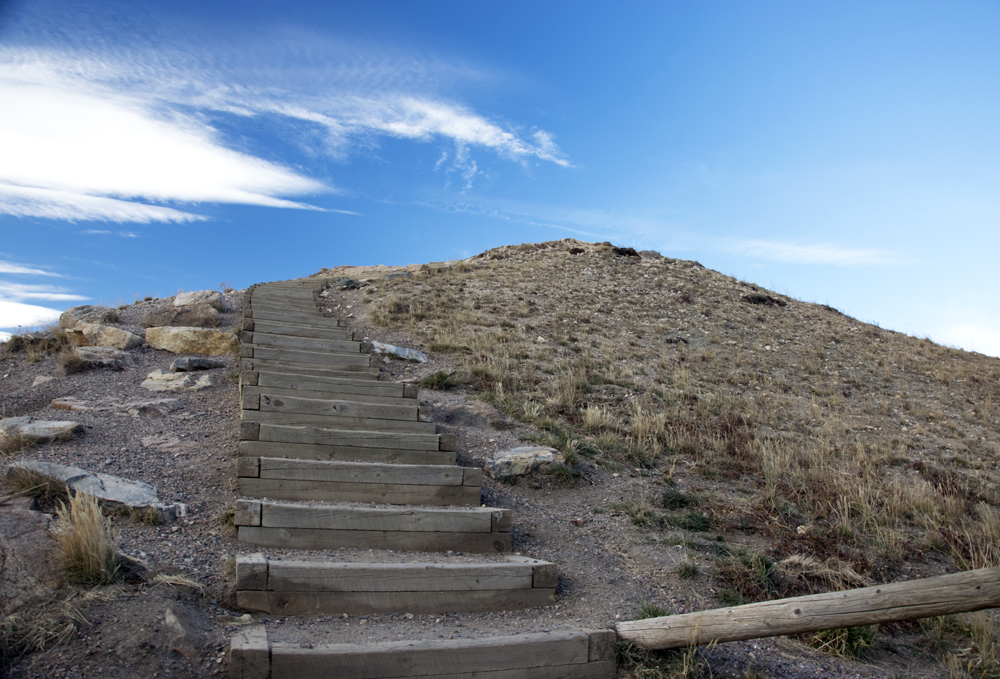 And I really tried to climb up there – I really did! But it was super windy and frickin’ COLD. I made it halfway, high enough to snap this photo of our car down below. Notice the trail across the road – there is a person walking down that trail in the distance: 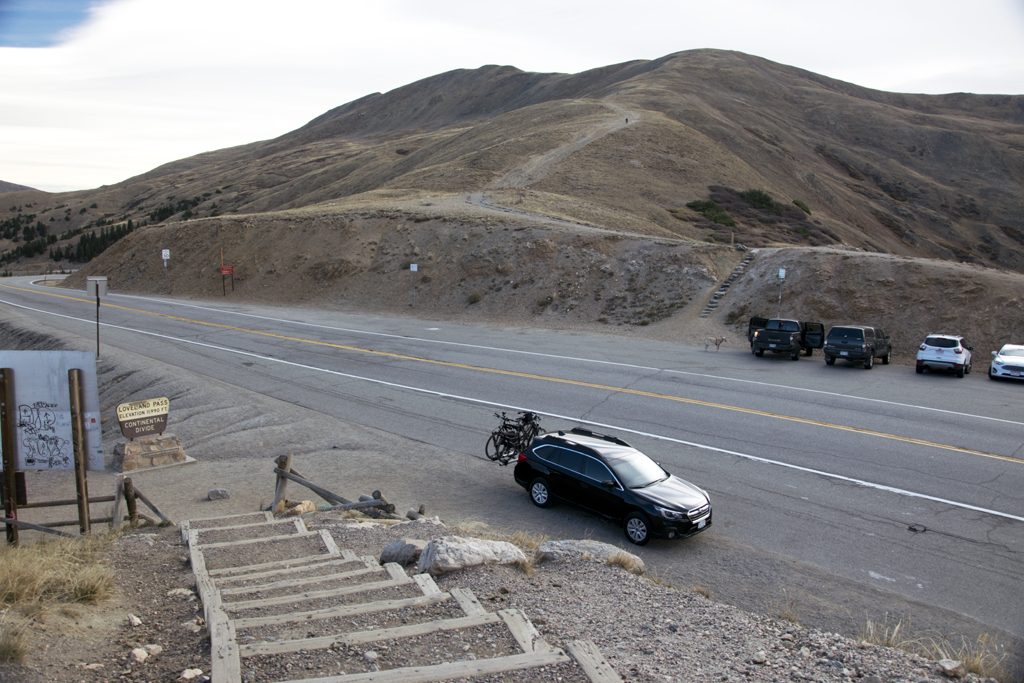 Another shot from halfway up: 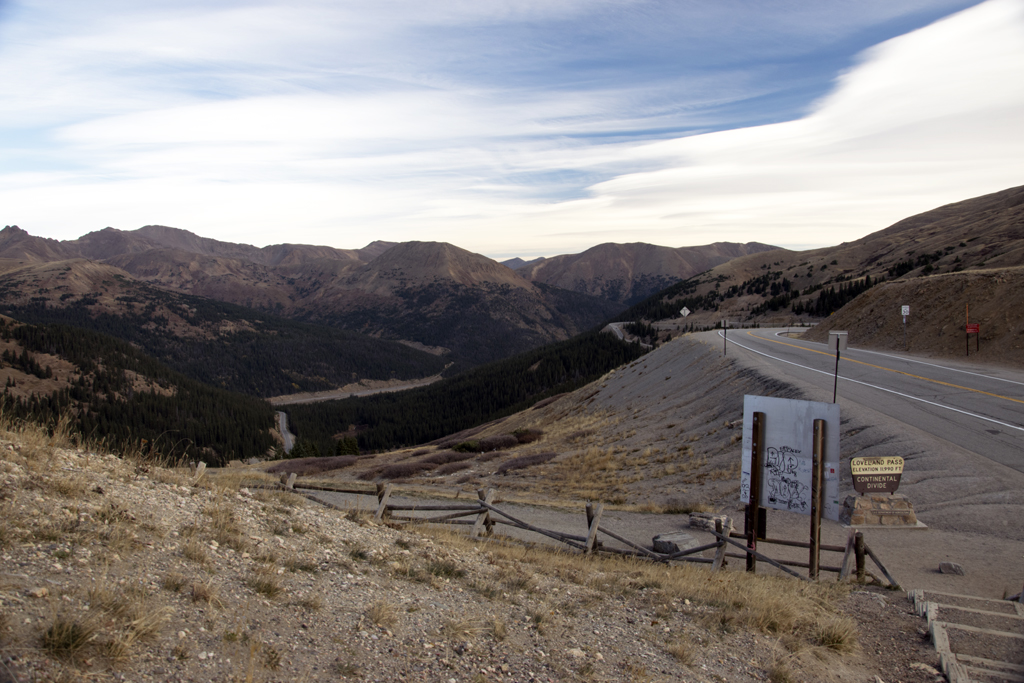 After we were on our way again, we stopped at this pull-off that had a beautiful little mountain lake (still above the treeline for the most part): 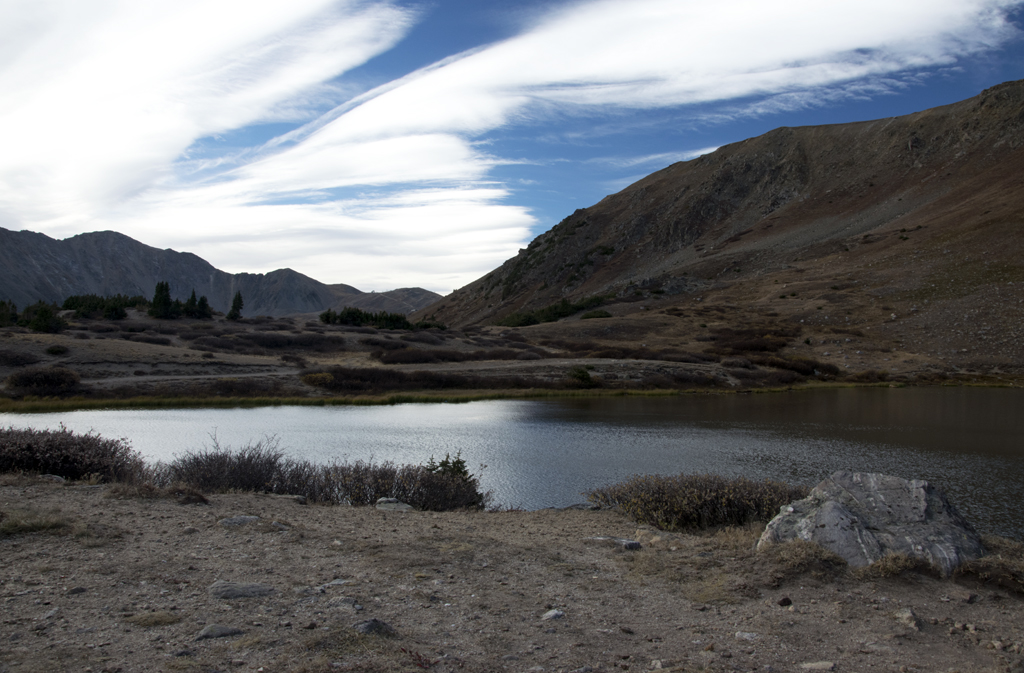 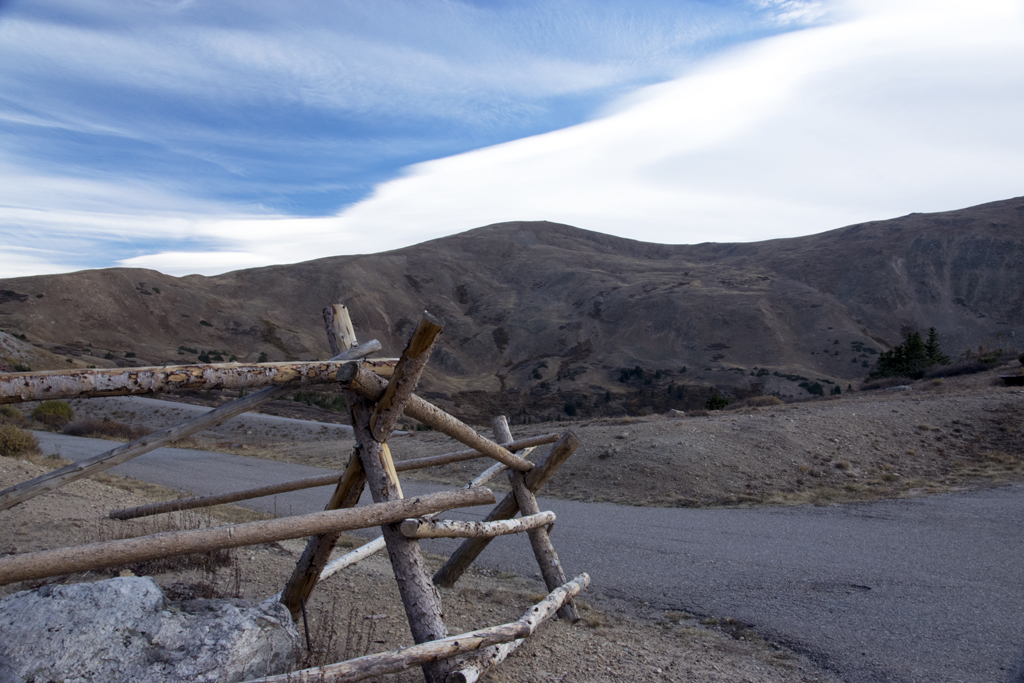 And, of course, the road took us down into the forest land again. 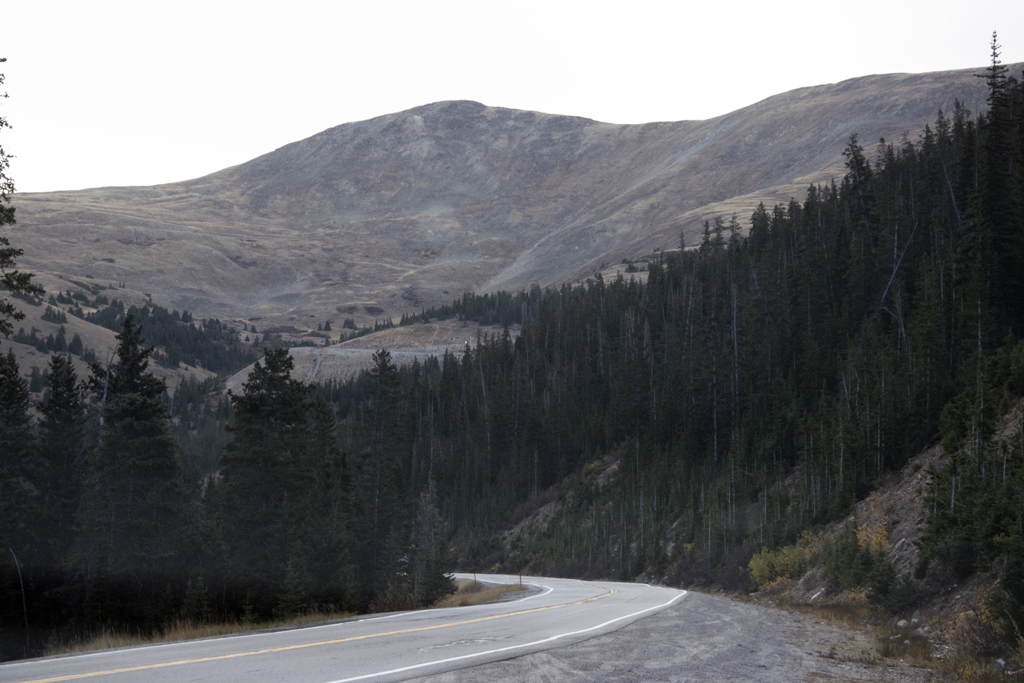 There were lots of ski resorts along our route, and they were full of activity. Snow will come soon and they will be in full swing before we know it. I’m glad we traversed this in good weather. I wouldn’t want to drive this route during the winter snows. 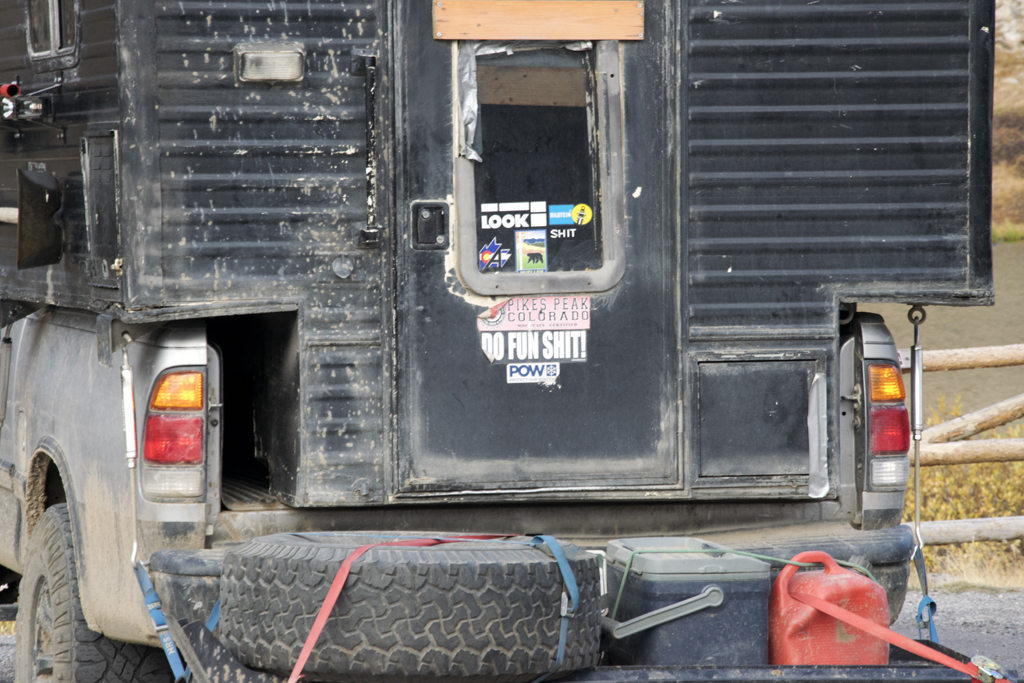