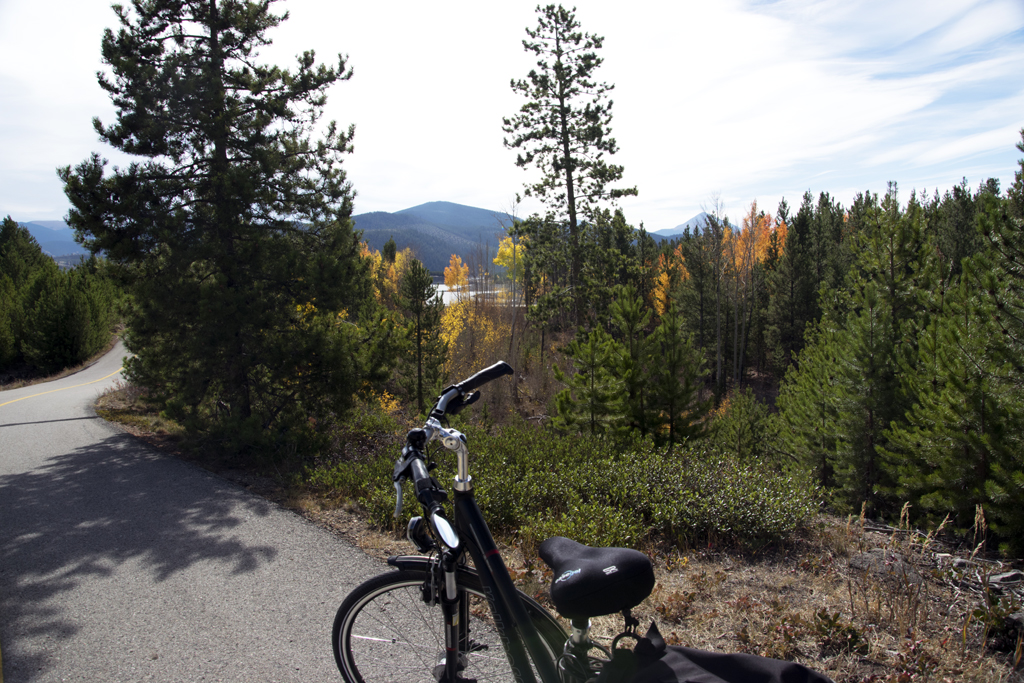 The weather has turned cold and wet lately here in Colorado. Winter is definitely on the way. However, I’m posting some sunnier photos this week.

In keeping with the bicycle ride theme set by my recent post about McIntosh Lake and by this week’s Throwback Tuesday Post (TBTP), my Bavarian Summer Bike Ride from 2012, here are some great pictures from my latest biking adventure. At the suggestion of our far-too-fit neighbors, my husband and I drove the hour-and-a-half up to Lake Dillon in the Rockies to circumnavigate the huge reservoir there. In fact, it was the ultimate destination for the Loveland Pass trip I posted about last week. As you’ll see, the weather warmed up considerably later that day.

In between the pass and the lake, we stopped for a hearty mountain breakfast that was surprisingly delicious for a storefront joint on the outskirts of Dillon. Shoutout to Haywood Cafe! Across the street from the cafe, I grabbed this shot of a cellphone tower disguised as a fir tree: 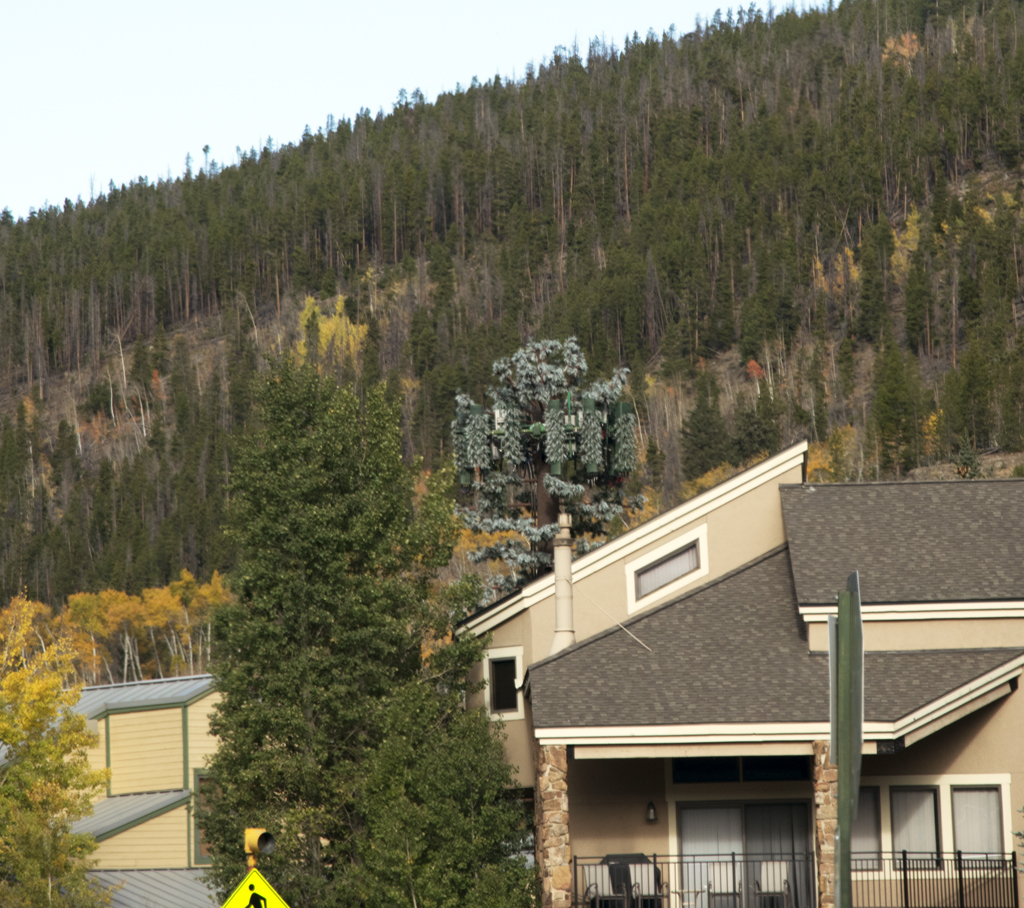 I’ve seen this in a few other places as well. Although it wasn’t fooling anyone, I think it looks considerably better than a plain one.

Lake Dillon is actually Dillon Reservoir, and there are two other towns on the water: Frisco and Silverthorne. The reservoir is owned by Denver Water and provides water to the city. The lake is fairly close to the ski areas at Breckenridge, Keystone and Copper Mountain, too.

The town of Dillon, elevation 9,111 feet, is actually in its fourth location since incorporation in 1883. And, as much as I wanted it to be named after Marshall Matt Dillon, alas, it was named for a prospector, Tom Dillon. It originally lay on the Snake River near the confluence of the Blue River and Tenmile Creek. It moved shortly thereafter to be nearer the new railroad line. It moved again in 1892 to be closer to a newer railroad. Its final move came in 1961, ahead of the damming of the river by Denver Water. This means that the old Dillon site is now under water. FYI: Denver water had acquired most of the land in the Great Depression because people couldn’t pay their property taxes.

Anyway, we arrived at the lake in Dillon just after the sun had broken up the cloud cover. What a view! 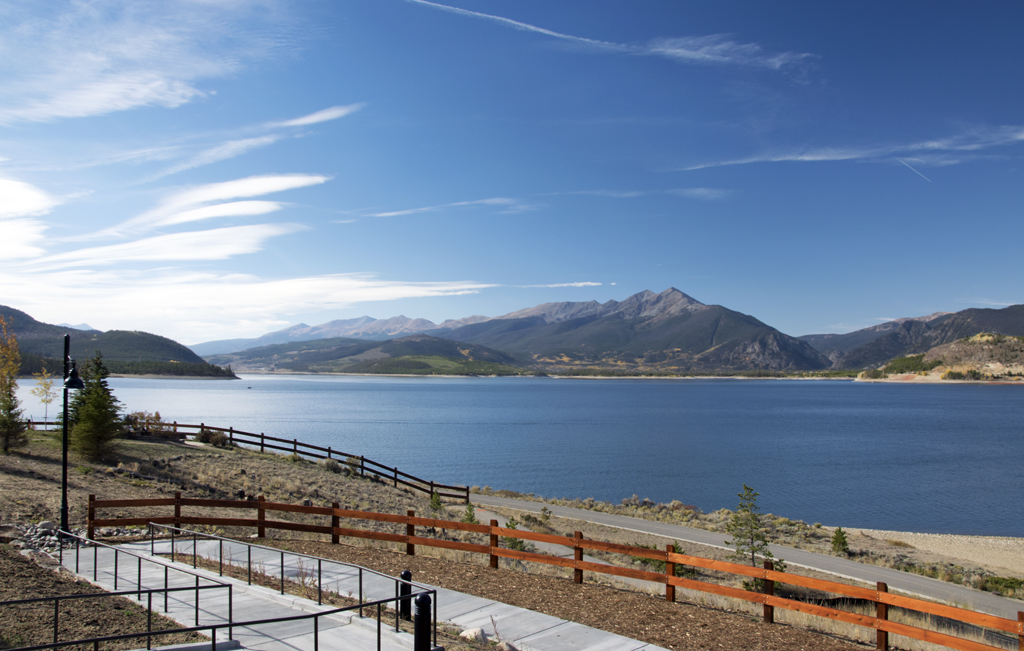 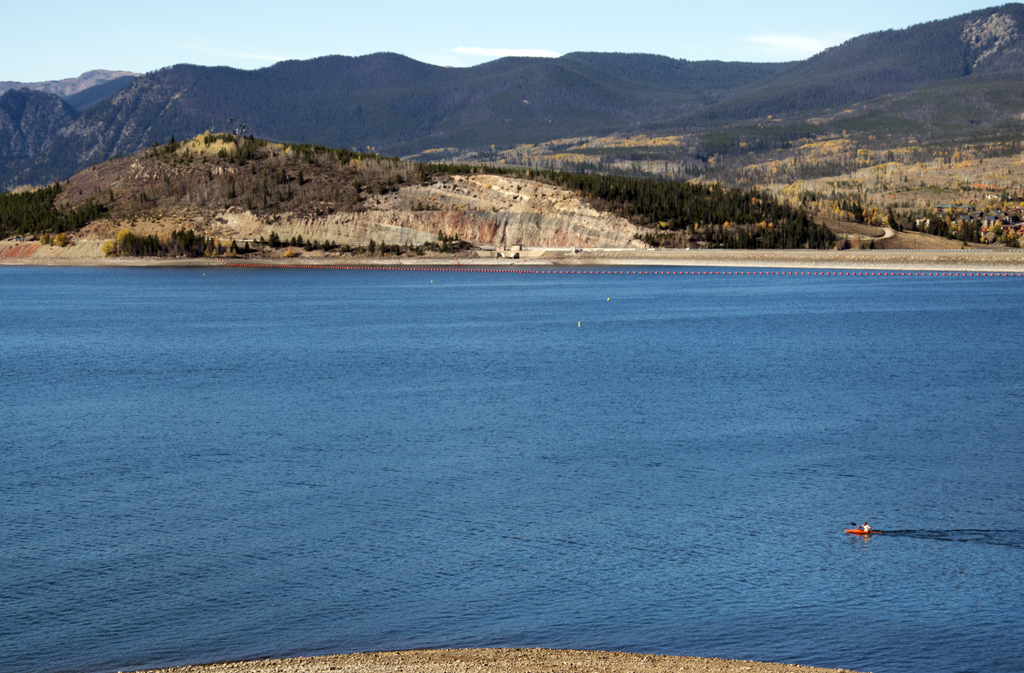 The dam itself is over a mile long and rises over 200 feet above the riverbed. The entire recreational path around the lake is paved. 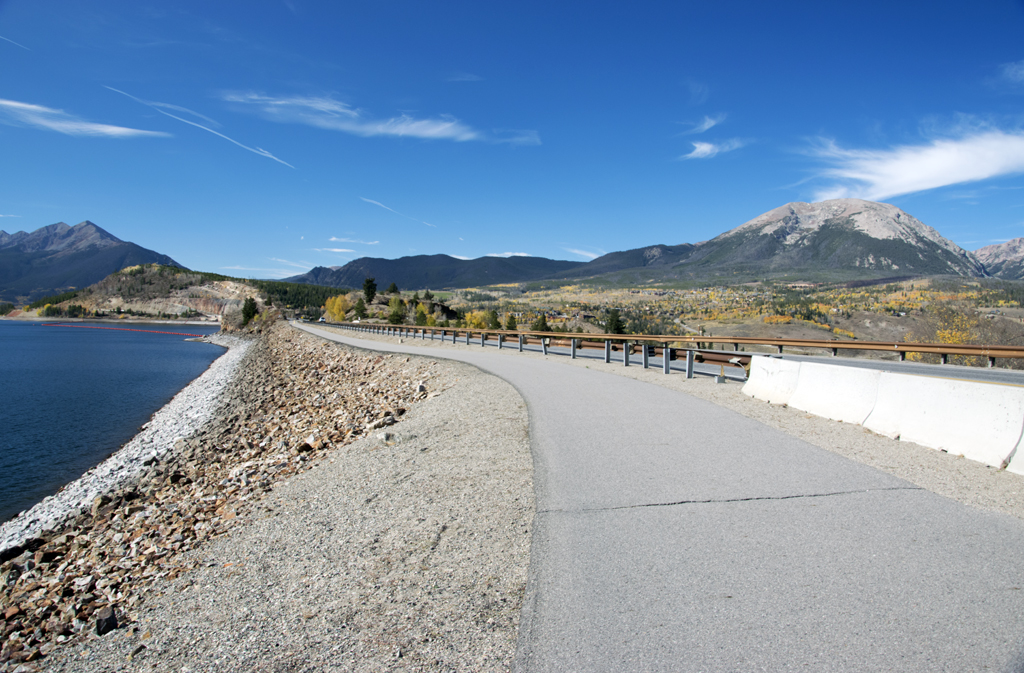 The terrain changed as we rode the 18-mile loop. This is the end opposite Dillon: 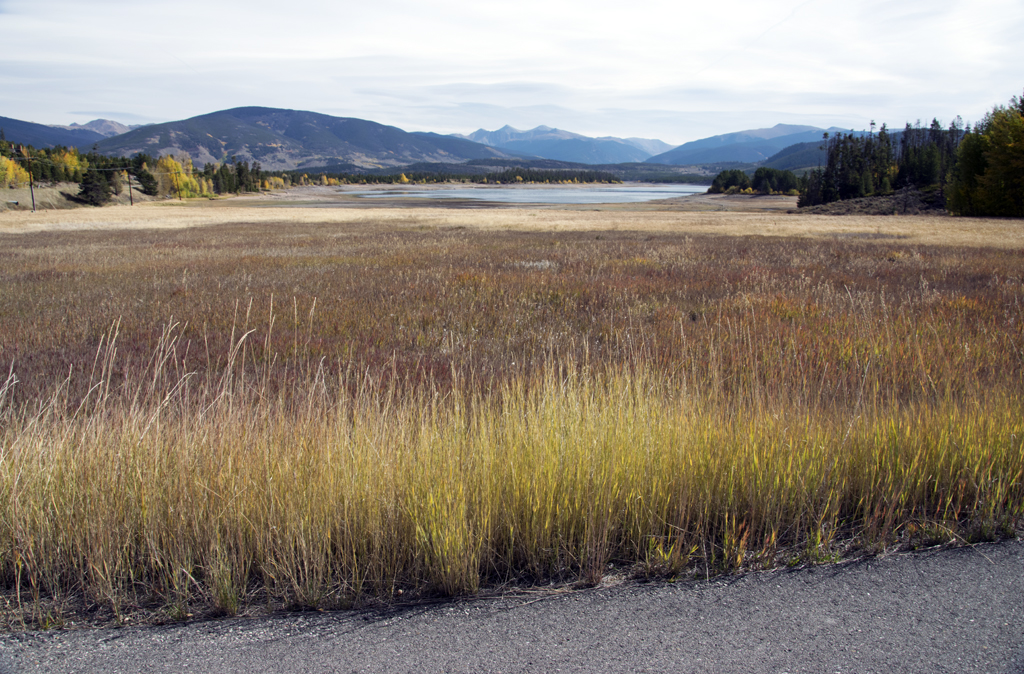 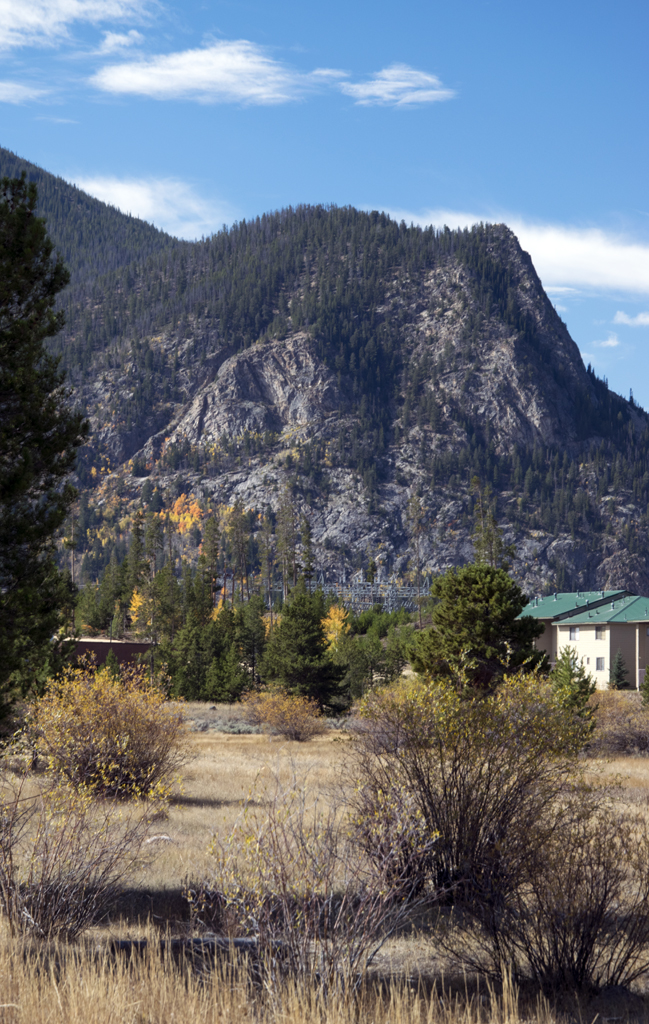 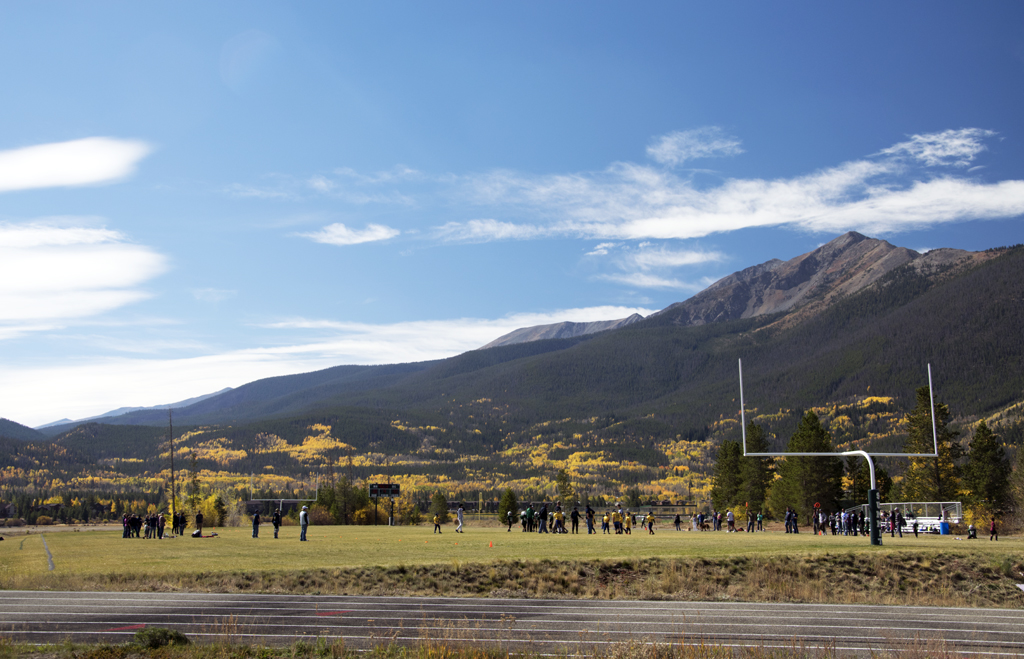 One of the best treats of the day was seeing the aspens, which had turned a glowing gold, lying among the evergreens. Magic! 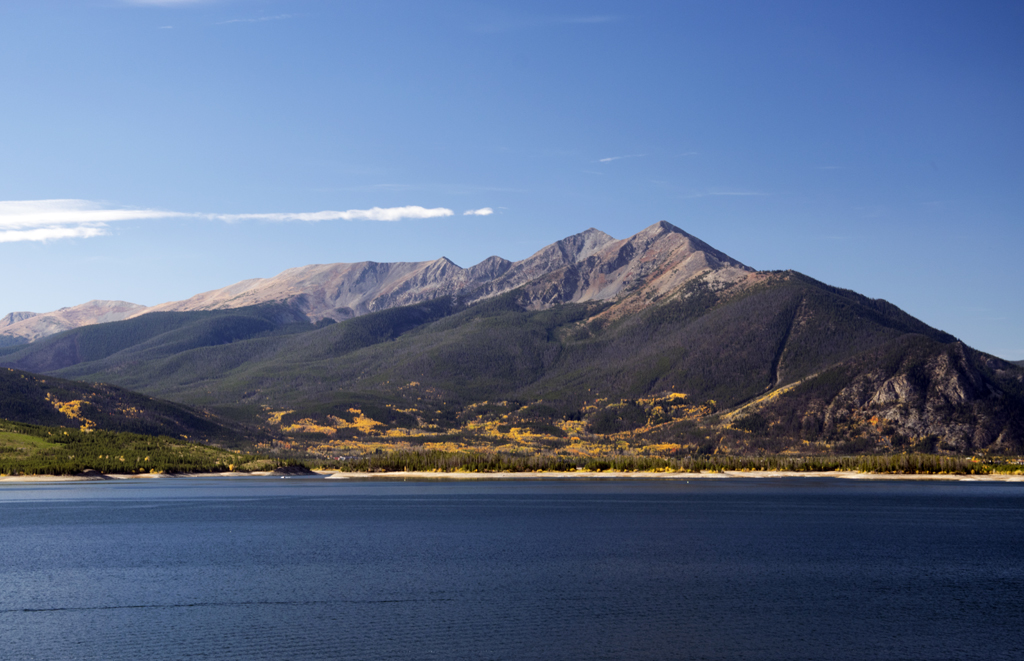 But all good things must come to an end. Unfortunately, I ran out of juice around the 10-mile point. I might have made it, except the final segment was to ride up and over Swan Mountain. There was no way! It’s doubly embarrassing because the guidebook said this trail was rated ‘easy’. I would agree – up until that last incline on Swan Mountain!

So, we turned back and I rested while my gallant husband went back for the car and picked me up in Frisco. Whew! I came away with two resolutions: 1.) get in better shape, and 2.) either come for a bike ride or come for photographs, but not both. It was a lot to handle, but I’m so glad we made our jaunt and that I got these precious pictures of the golden aspens on such a beautiful day. And the Colorado axiom to layer your clothes couldn’t have been put to better use. We started out bundled up, but ended up in shorts and t-shirts.

I hear that Dillon has had snow this week, and I can’t wait to go back up there to see it in all its winter finery. They build an ice palace there each year, and that’s on my winter list! 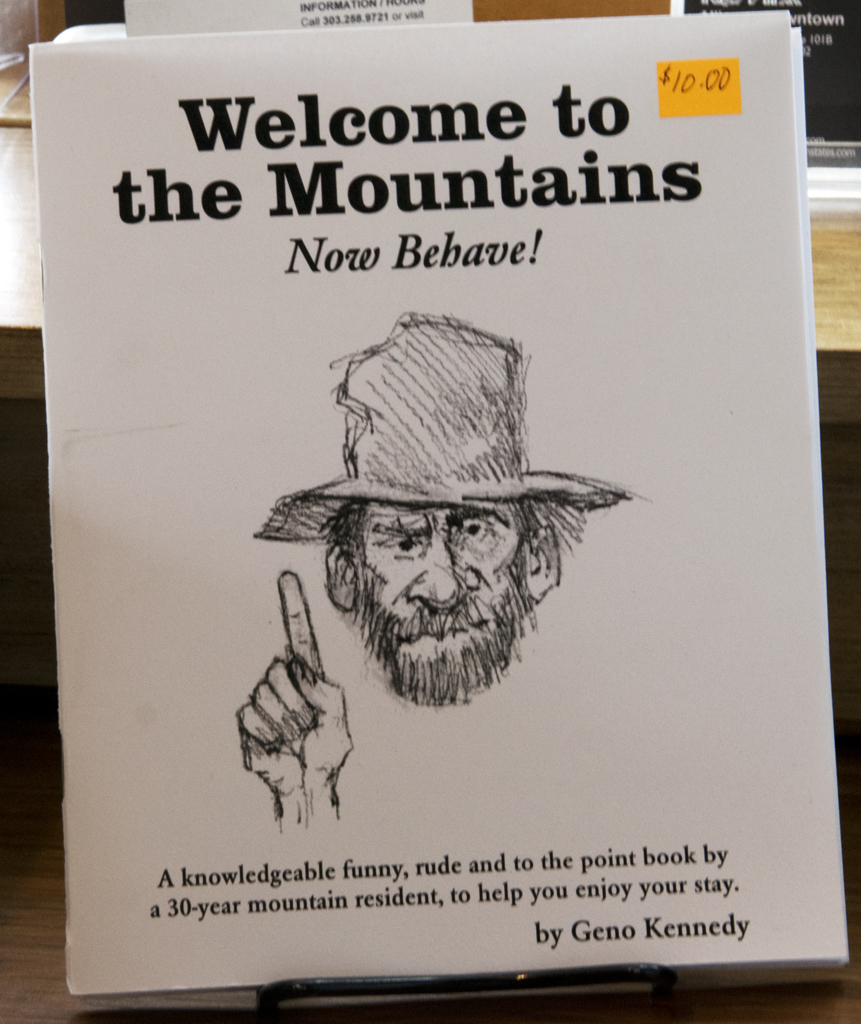