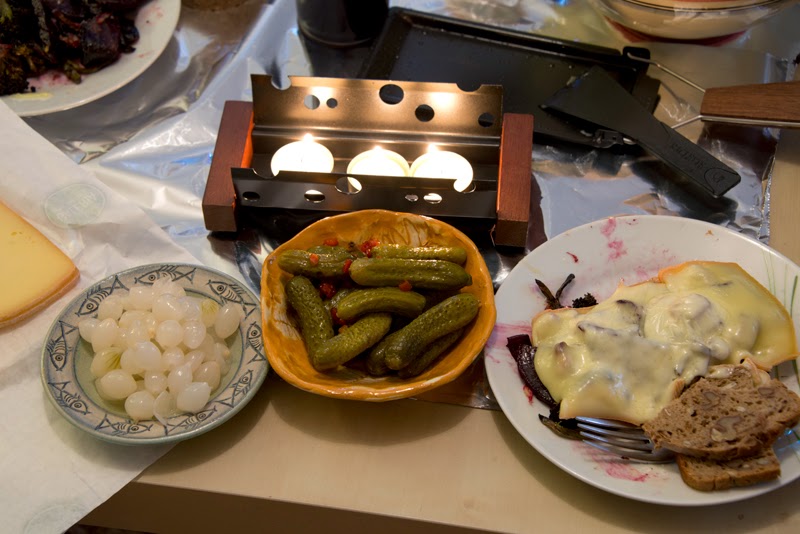 If you didn’t get my cookbook, ATFT-AppSnax in time for December 25, there is still time before New Year’s to get it and make good use of it, too.

It has delicious and easy appetizer and snack recipes – it even has a section for no-cook/no-bake recipes.

Happy New Year! Those of you who follow me on Facebook probably already know that we didn’t have a white Christmas here in Munich, but a few hours past midnight in the wee hours of December 26, we got a covering of snow which then melted over the weekend. Then, two days ago, Nature said, “Pfffttt!!! Snow, Schmo!” and gave us two days of straight snowfall, about two feet total.

Here’s my Mini on December 26 and then yesterday: 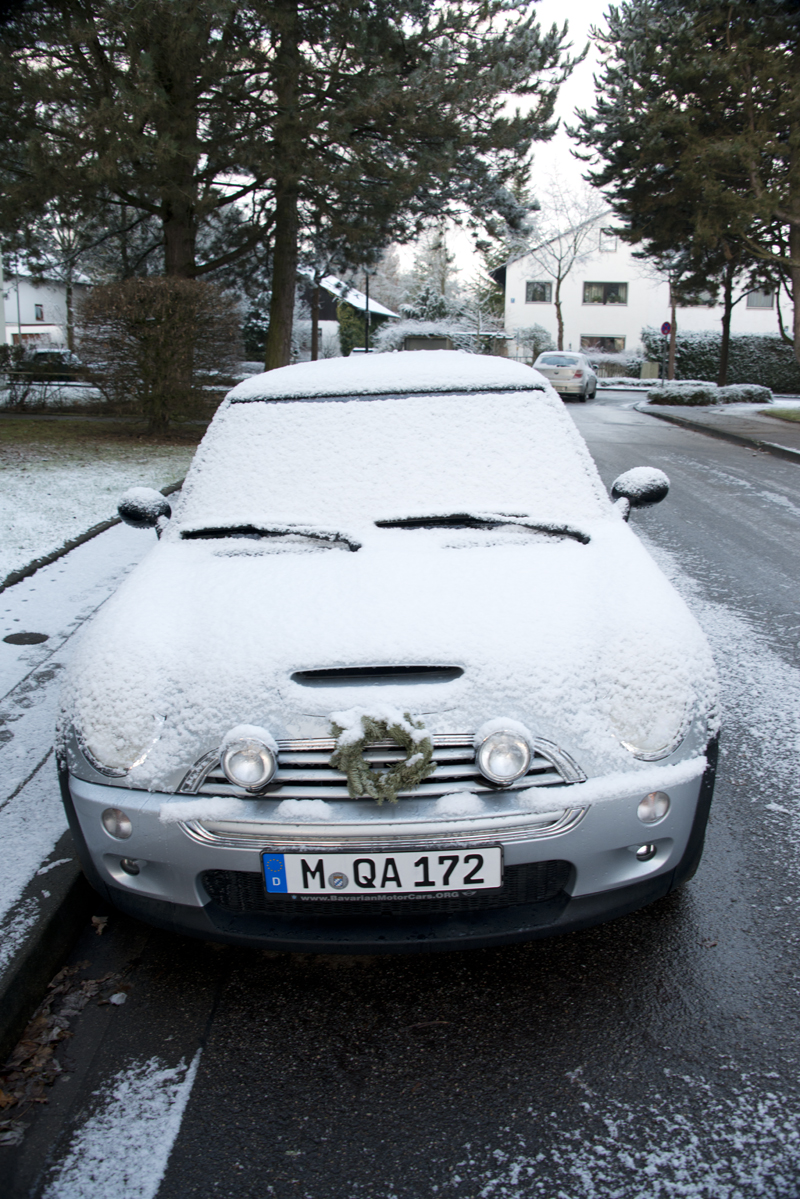 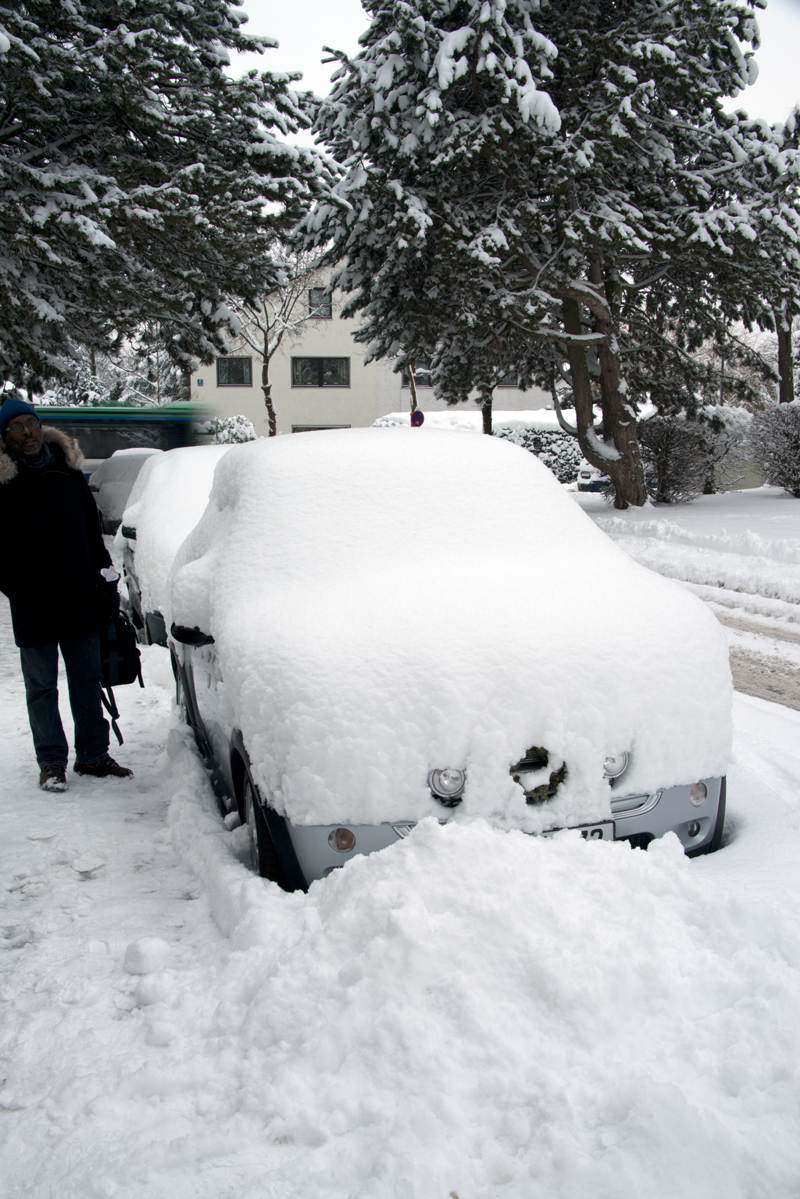 Not to worry, though, because the high tomorrow is expected to be in the high 40’s and the snow has already begun to melt. But I managed to motivate myself to go out early in the morning on New Year’s Eve and get some nice winter photos on the paths and creek behind our apartment complex: 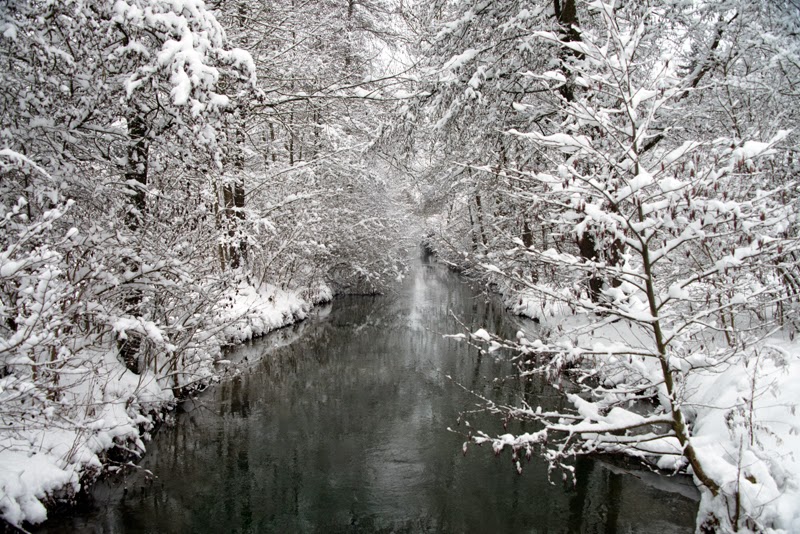 You can always count on someone walking their dogs no matter where you are or at what time: 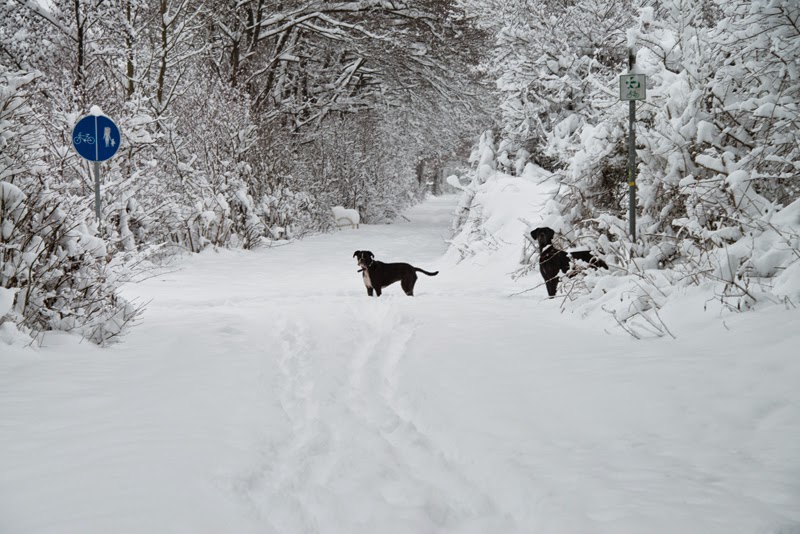 Why don’t ducks get cold feet? 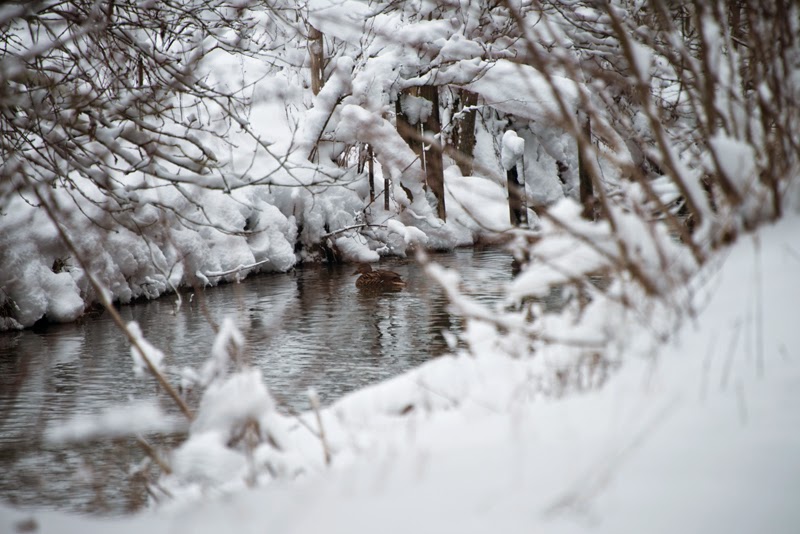 So that’s the snow report. Now on to something more delicious.
I usually post my blog on Wednesdays. However, this week I waited until Thursday because I was planning something interesting for New Year’s Eve dinner that I wanted to share with you. It’s called “raclette,” a word that has multiple meanings. Wikipedia has some good information about it. The word itself derives from the French word for “to scrape”.
Firstly, raclette is a fairly mild, semi-firm cheese, softer than cheddar but firmer than Camembert. It’s from Switzerland, made in wheels and designed for melting over other foods.
Secondly, raclette refers to a meal in which the cheese is served. This is usually a very casual group party with family or close friends. Traditionally, the cheese is melted on one side and the melted layer is scraped onto cooked potatoes. The accompaniments are small pickles and pickled pearl onions. I think the original method for melting raclette was to put it close to an open fireplace and periodically scrape the melted cheese off onto each person’s plate in turn. The tradition originated in Switzerland, just like the cheese, but the Germans and Austrians and others have adopted it.
Thirdly, I’ve heard the word raclette used to refer to the apparatus used for melting the cheese. Since open fires can be impractical, lots of clever machines exist to melt the cheese. I’ve seen everything from giant outdoor-heater-type mechanisms at snackbars to small tabletop electric grills for the home.
The tabletop grills usually have a grill plate on top and a second tier under that. Each person has a small skillet with their potatoes or other food in it. Then a slice of unmelted raclette is put on top of the food and the skillet is inserted in the machine under the grill plate. The heating element for the grill plate is then above the skillet, which melts the cheese. Meanwhile, shrimp or other stuff is grilled on the grill plate.
If you think about a fondue party, you’ll get the idea of raclette event. And just like a fondue pot, the raclette machine resides in the kitchen cabinet all year until you use it in the winter, usually for New Year’s Eve dinner and usually only once, if that. I wanted to buy a raclette machine, but I didn’t want something to take up a lot of space (German kitchens are very small). I also wanted something that used tea lights or sterno for a heat source instead of electricity so I could use it anywhere I happened to live.
So, my husband and I set out to find me a raclette on Tuesday this week. I lucked out and found this one (and some cool extra wooden spatulas for future guests) for about 15 Euros: 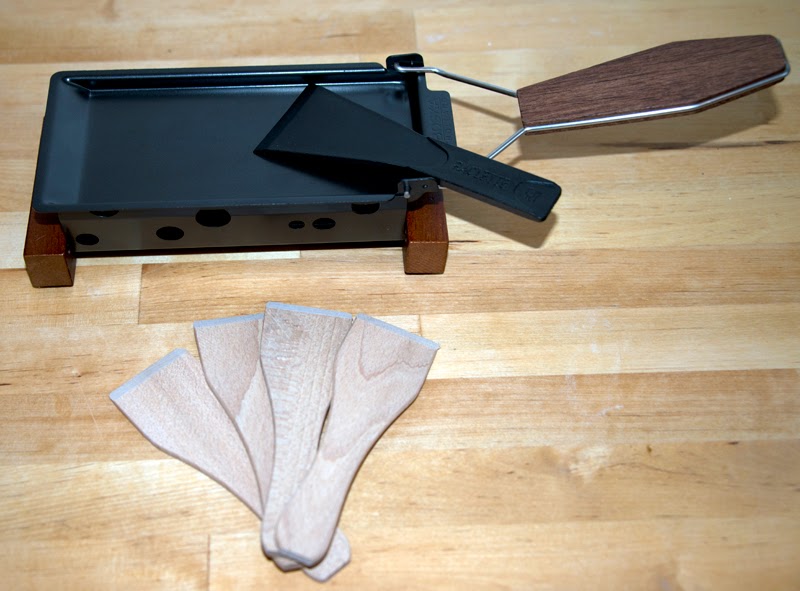 It folds up and fits into this little box, which is only slightly longer than my hand: 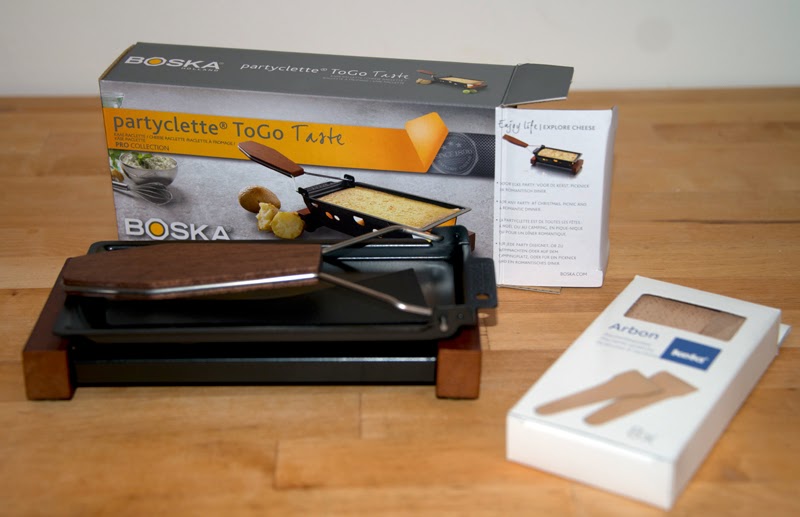 At the same wonderful store, Kaufhof Galerie at Marienplatz, is a gourmet supermarket where I got the raclette cheese. When I asked the cheese counter lady for the raclette, she asked if I wanted mild or würzig, which, for cheese, means tangy or more flavorful. I told her half and half.
Instead of potatoes, I made some roasted green beans and beet slices with shallots and garlic in the oven to put the melted raclette over. I think potatoes would be tasty but heavier than I wanted for so late in the evening.
Here’s the raclette melting in the raclette behind my plate with the roasted veggies and a slice of dark bread toast. Notice how the slice of cheese from the market fits perfectly into the melting tray – I don’t think that’s an accident. 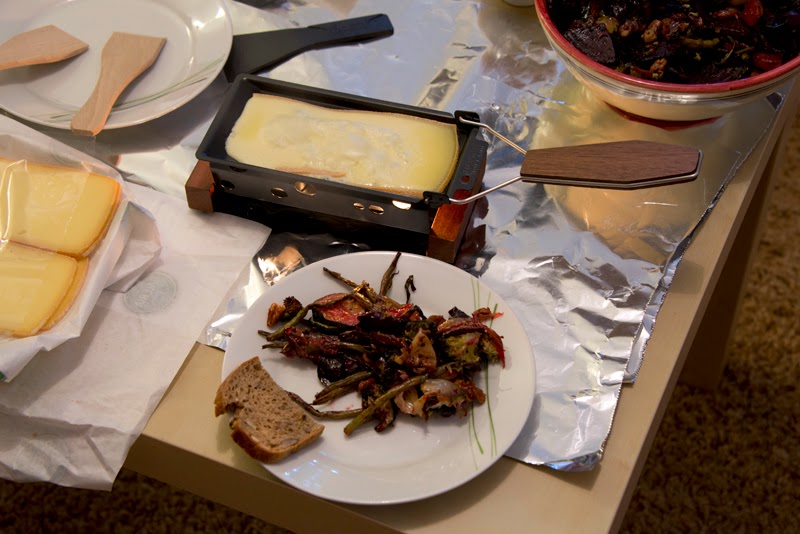 Here you see me scraping the melted cheese off the tray. I say scraping but it was more like sliding it off; it wasn’t sticky at all. You can also see the three tea lights powering the “machine”. 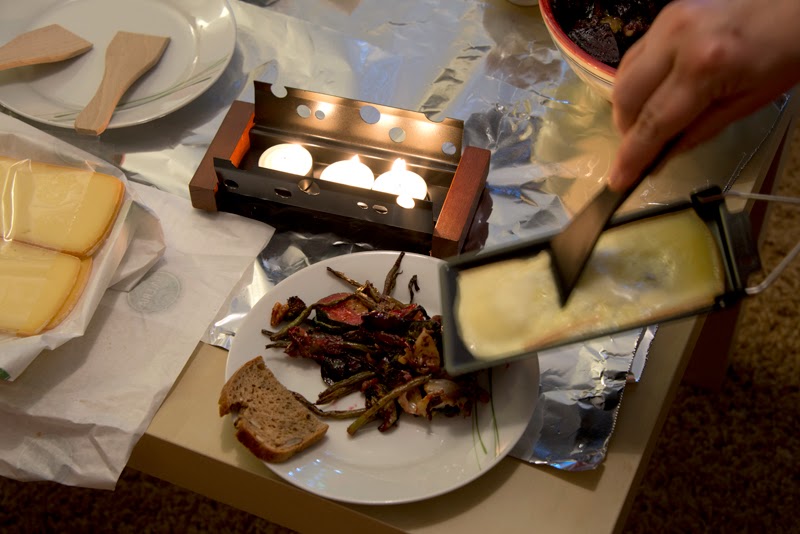 And another shot with the cheese on the veggies and my husband’s raclette beginning to melt: 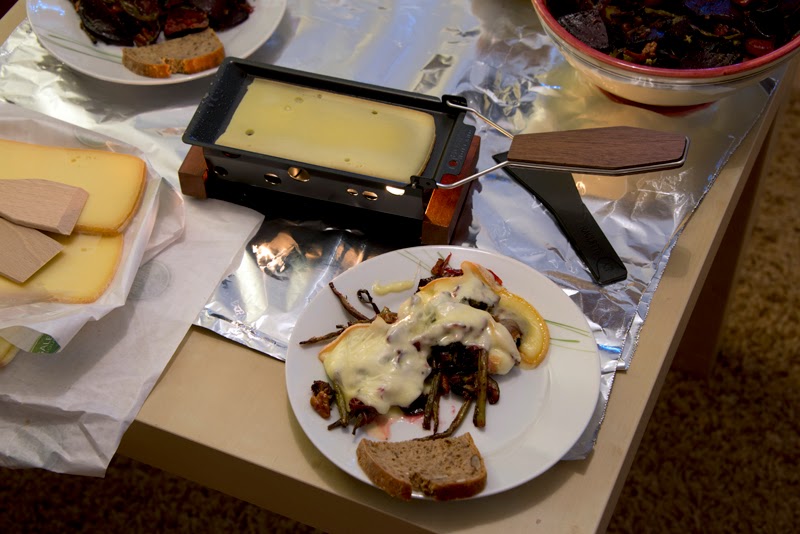 Here is my husband’s plate with the traditional pickles and onions:

I have to admit that, even though the cheese counter lady was careful to mark which raclette was mild and which was würzig, we really couldn’t detect a difference in the taste.
This dish was wonderful with a nice red wine, of course! But white wine is more traditional, I think. I just like red better. I know there are many things I did that weren’t exactly traditional where raclette is concerned. But I’m happy to have tried it and also to have put my own spin on it. Next time I’ll have to have more people for the meal. It is truly a social procedure that would be so fun with a small group of good friends!
Again, I wish all of you a very happy 2015; I look forward to exploring more delicious locations and items and sharing them with all of you in the coming year.
Photo for No Apparent Reason: 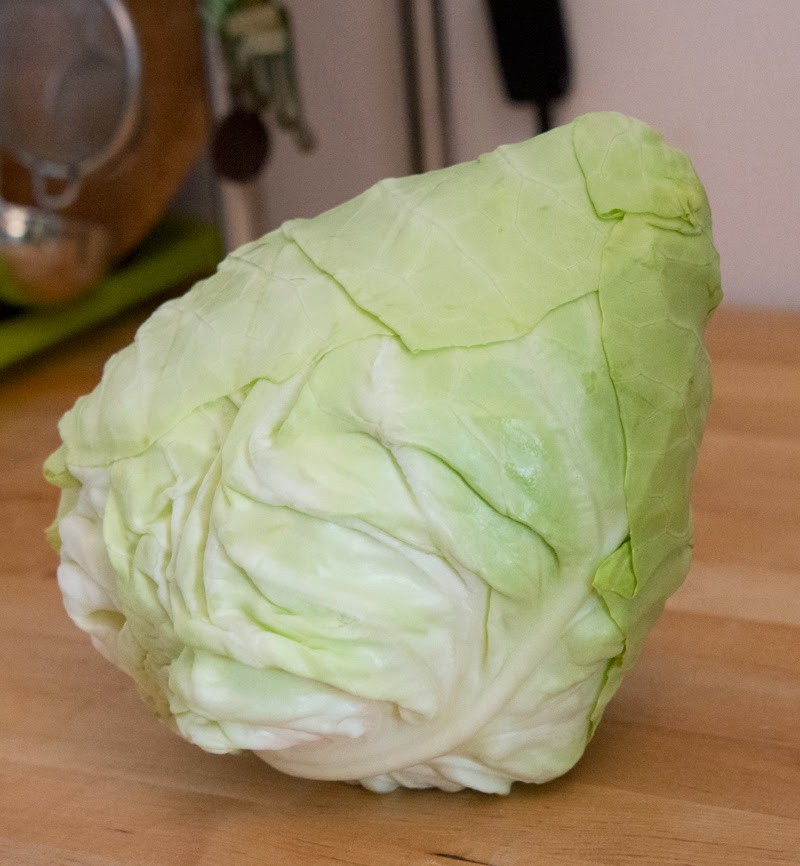