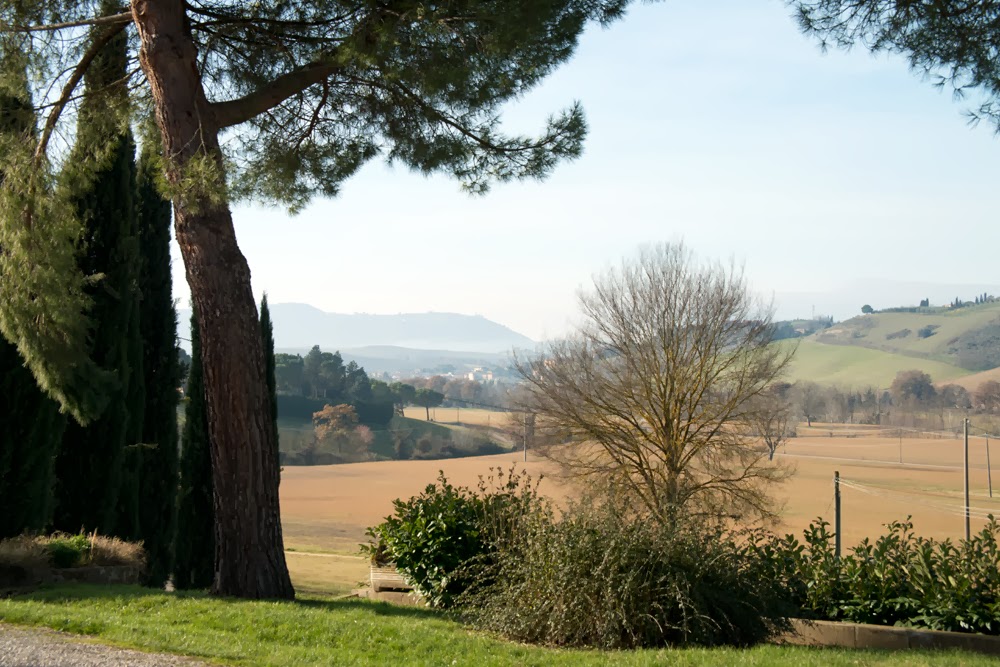 In preparation for my latest book coming soon, be sure to get your

Photos for No Apparent Reason (PFNAR) 2017

In my last post, I promised you accounts of my Tuscan vacation in December.  One of the daytrips we took included a visit to what has to be our entire group’s favorite destination of that week, Santa Giulia, near Montalcino.

One of our tour guides referred to the family that owns this small wine estate as “The Holy Family” and it is easy to see why. Firstly, the family consists of the parents and one son. Secondly, they produce just heavenly wine, food and experiences!
We were met early that morning by yet another handsome tour guide, Andrea Caroni. Andrea is the twin, and younger brother by five minutes, of our driver from the previous day, Marco. They run a chauffeur and tour guide service which I highly recommend. They drove us to all of our daytrips save one that week and also roundtrip from the Florence airport. They speak perfect English and couldn’t be nicer or more knowledgeable, so give them a call if you need Tuscan driving service. Tell ’em I sent ya!
Andrea drove us to the area just southeast of Siena known as the Montalcino wine-producing region. This area is famous worldwide for its Brunello di Montalcino red wine. Sign me up!
If I haven’t impressed upon you that the Tuscan countryside is just simply breathtaking, then take note now. I can’t describe just how pleasurable it is to just soak it all in while standing on a Tuscan hillside. These sweeping vistas consist of huge rolling hills and deep valleys, all drenched in the most golden of sunlight.
As Andrea drove us southward, the landscape slowly morphed into even more beautiful views, if that’s even possible. The hills became more gentle yet with valleys still as deep. And every earth tone known to man is represented, many times in close juxtaposition. This area is known as the Clay Hills and have been designated a UNESCO preserved area because of a couple thousand years of human agriculture that has helped shape the hills and valleys.
Interesting is, several years ago before I ever went to Tuscany I painted a mural on the dining room wall in my Florida house. I always referred to that room as my “Wine Room” and to the room itself as my “Tuscan verandah.” Much to my surprise, the real Clay Hills look exactly like my mural, from the angle of the slopes to the colors! I was speechless. 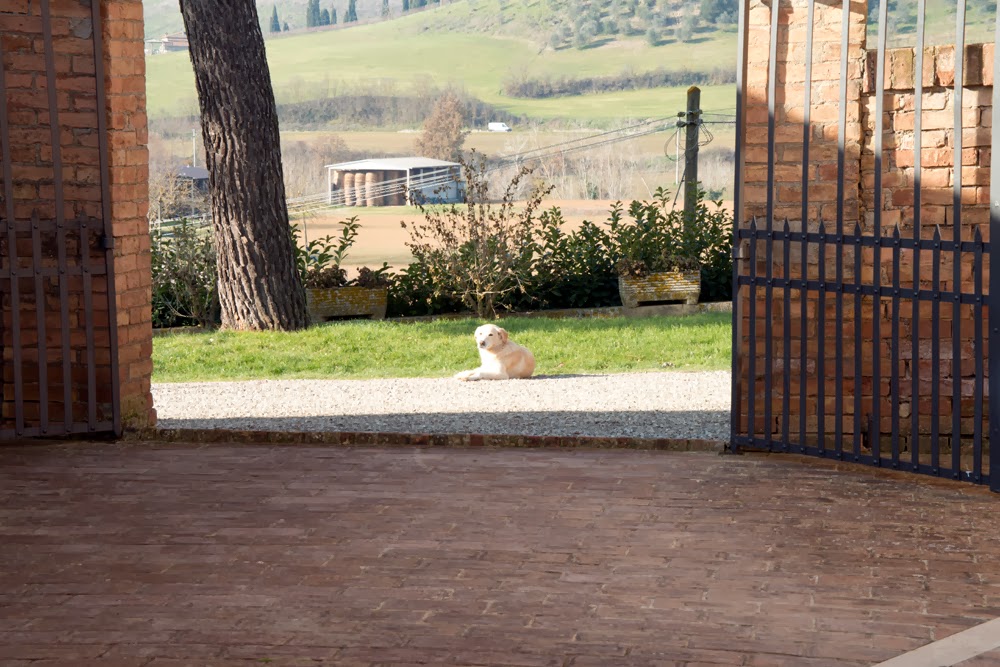 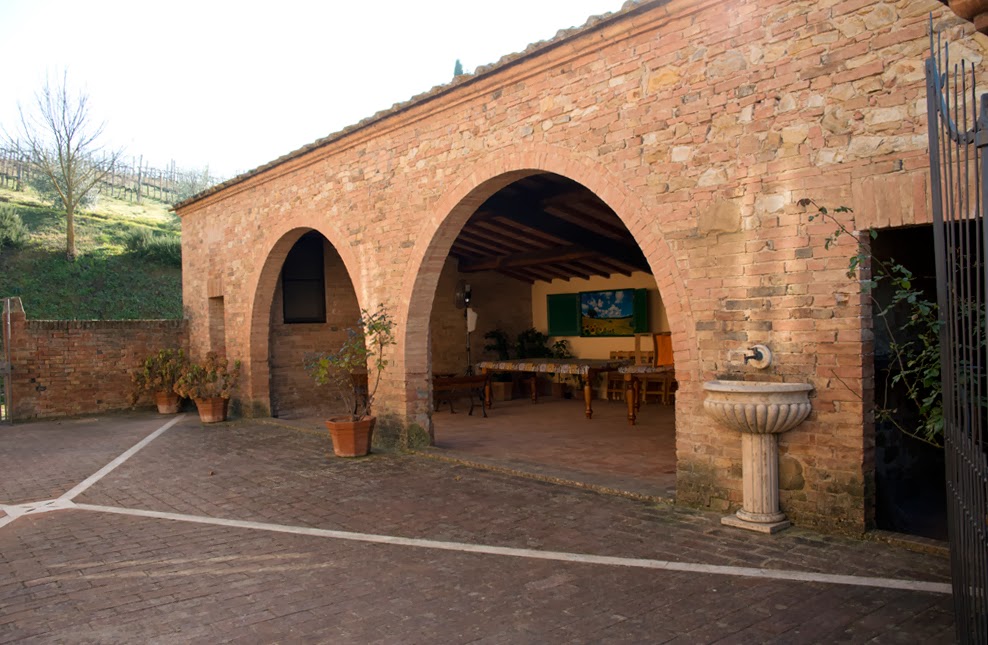 We arrived at Santa Giulia and were met by Gianluca (Like ‘Jean Luc-a’) Terzuoli, the son and winemaker. He gave us a quick tour of the wine cellar, which was by far the smallest we saw that week.
Gianluca led us into a tiny concrete room crowded with big wooden wine barrels and talked about his vocation and their plans to expand. He then gave us an overview of the official Italian wine designations of IGT, DOC and DOCG, which, to be honest, we’d heard at least four times that week before Gianluca explained it.
Basically, winemakers in Italy must follow strict rules to be able to designate their wines with one of those abbreviations. It’s the Italian equivalent to the French Appelation designations. Winemakers must submit their wine and proof of the winemaking methods to an official committee. DOCG is awarded to wines that have been made following a strict set of rules about type and percentage of grapes used, aging time, and so on. DOC is slightly less restrictive, and IGT is less restrictive still.
For example, Fattoria di Corsignano, the wine estate where we stayed, is located in the Chianti region. For their Chianti Classico wine to earn a DOCG designation, they must submit it to the Chianti Classico Consortium. Some of the rules are that the wine must be made from at least 80% local Sangiovese grapes and a maximumn 20% other specific local red grapes. If the Consortium passes them, they get to call their wine DOCG and get to use the black rooster logo. No other winemaker gets to do that. The Consoritium issues only a specific number of paper bottle seals to each estate, depending on how many they applied for. The seals bear the black rooster and a serial number; one seal is affixed to each bottle produced. If an estate misplaces their seals, it’s an act of congress to get replacements, apparently.
By the way, I have a personal theory that the black rooster logo was chosen so that English speakers can refer to it as the ‘black cock.’ But I digress…
In case you’re interested, here’s a link to the Brunello di Montalcino Consortium website.
Anyway, as Gianluca continued his spiel, I did a few photos. This next one is a photo of a glass airlock atop the wine barrels. We saw a lot of them on our rounds that week. We were told that Leonardo da Vinci designed these airlocks. I couldn’t verify that with a short internet search, but it is oft-quoted. The airlocks are cool either way! 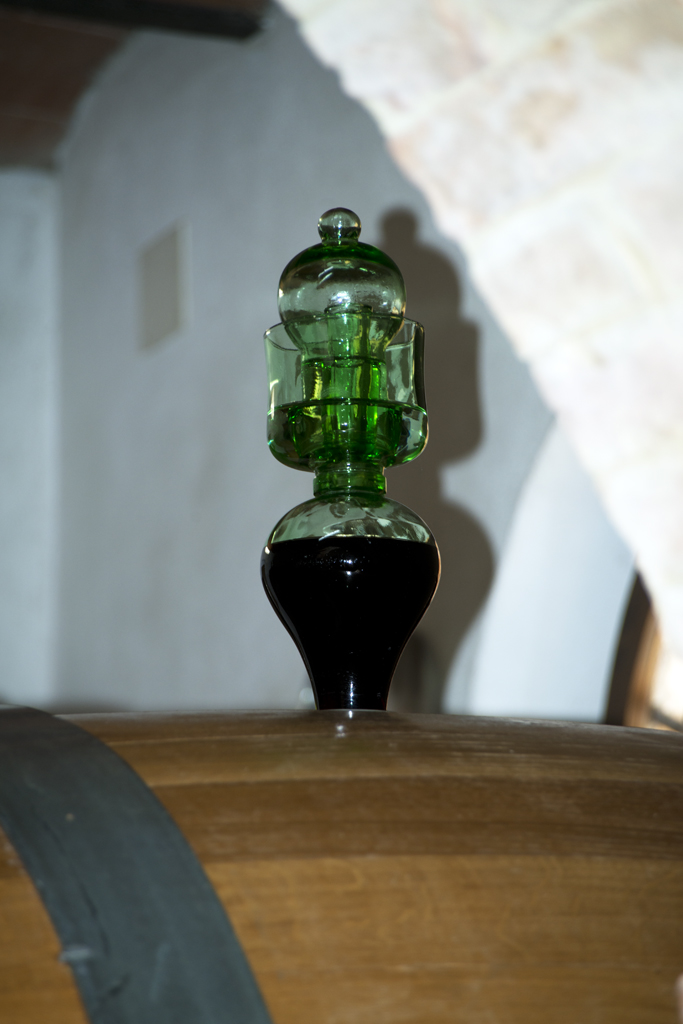 Next, Gianluca led us into the farmhouse. It was inviting and warm on this chill day! 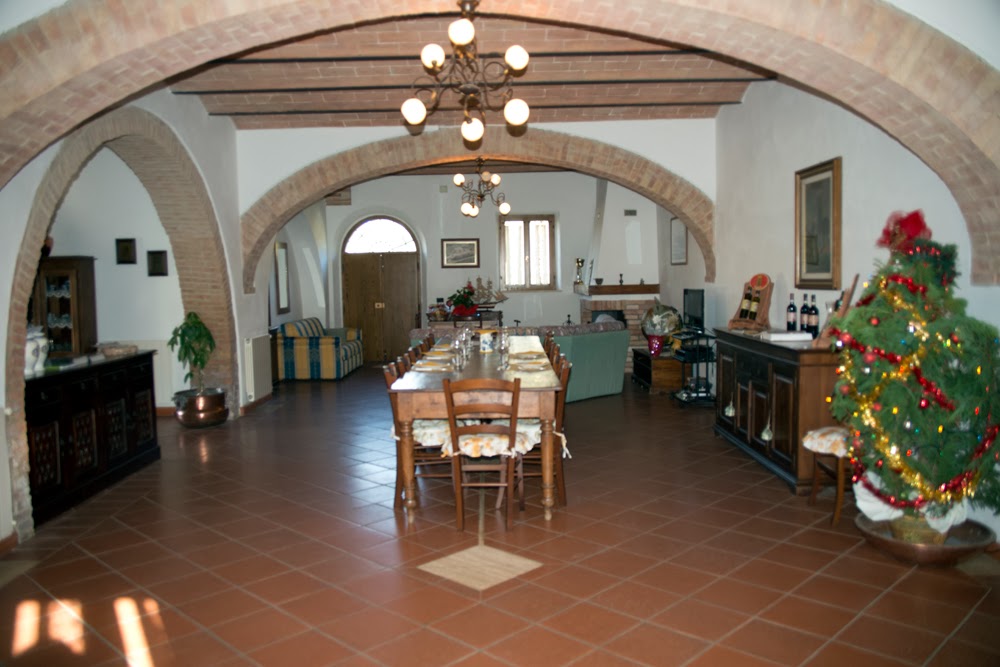 His mother, whose name I believe was Mirabelle though I can’t be sure, was bustling around in the kitchen preparing one of the most delicious meals of the week for us: 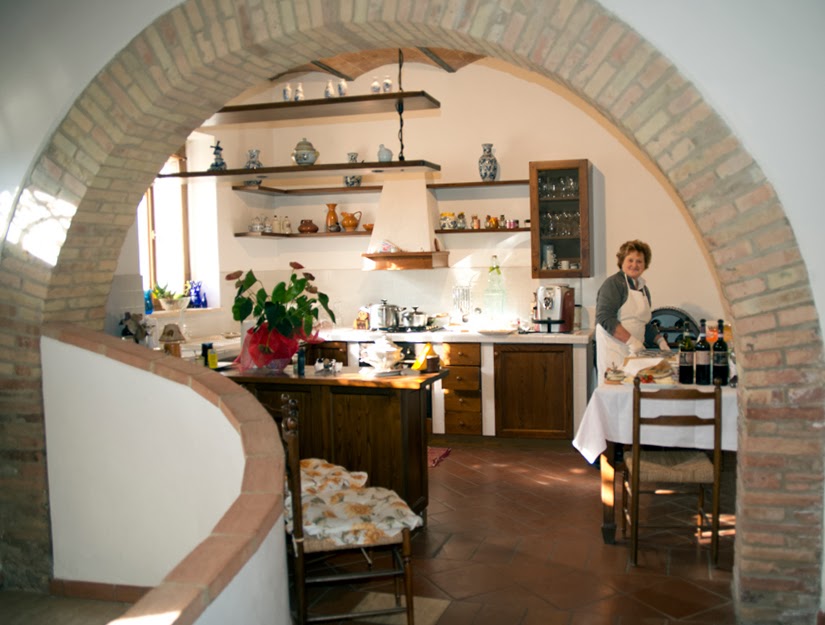 We explored the lovely, cozy room and Cyndie and I found cookbooks about Tuscan bread to buy on the sideboard. We warmed ourselves by the fire and chatted with Gianluca for a while. Presently, Mama called us to the table. Insistently, because, after all, it was ready!
I can’t tell you how delicious this food was – better than any else we had that week. And let me tell you, we had GREAT food that week! Andrea told us that, in addition to Gianluca being the winemaker, his father raised pigs and made capicola, salami, prosciutto and lombo, my new favorite pork cold cut. We sampled all of it. Wow. 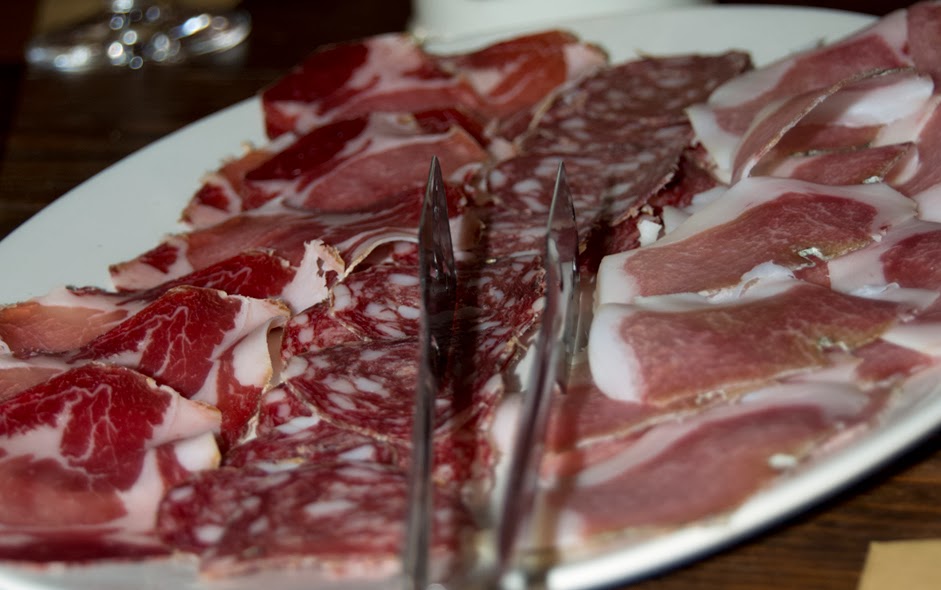 Mama served us pecorino from the local area, which is a delicious sheep’s cheese. All you Americans eating pecorino romano, forget it. This is way different! 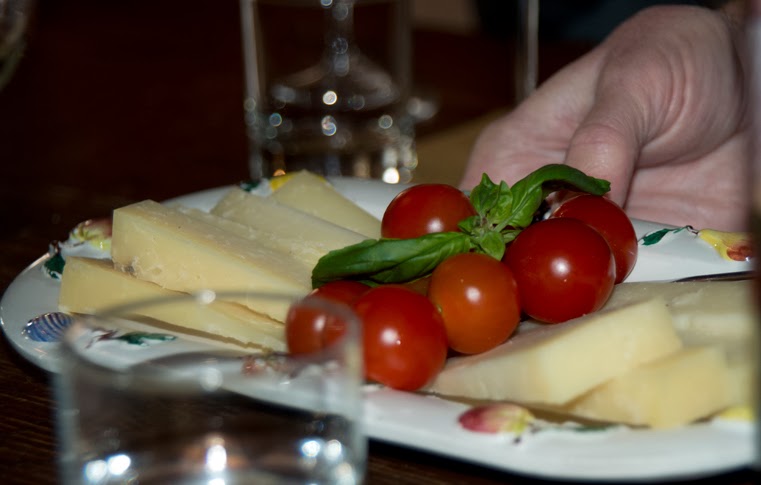 Mama hooked us up some fresh bruschetta: 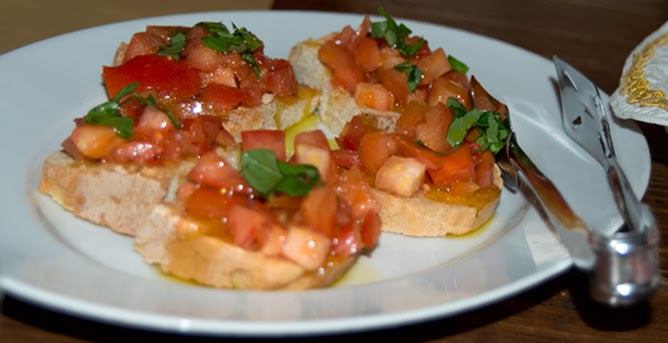 The best part of this fantastic meal was the homemade pasta with meat ragù: 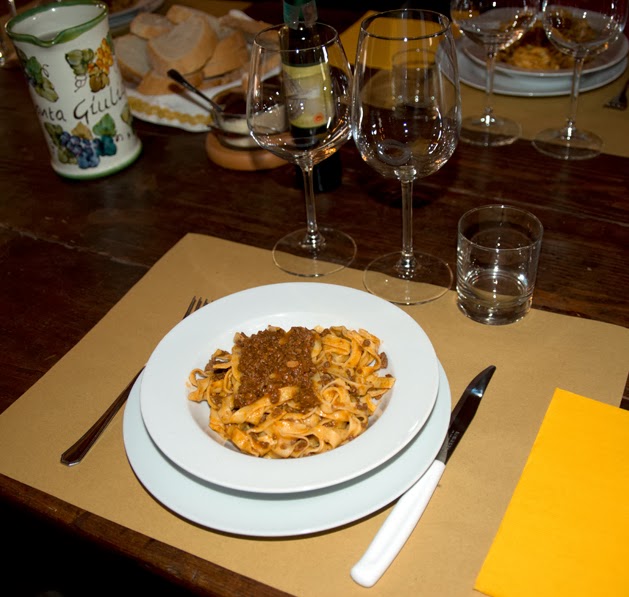 For dessert – as if anyone had any room at all for dessert! – was what she called Crema Chantilly, a lemon cream dream between layers of puff pastry sprinkled with cocoa: 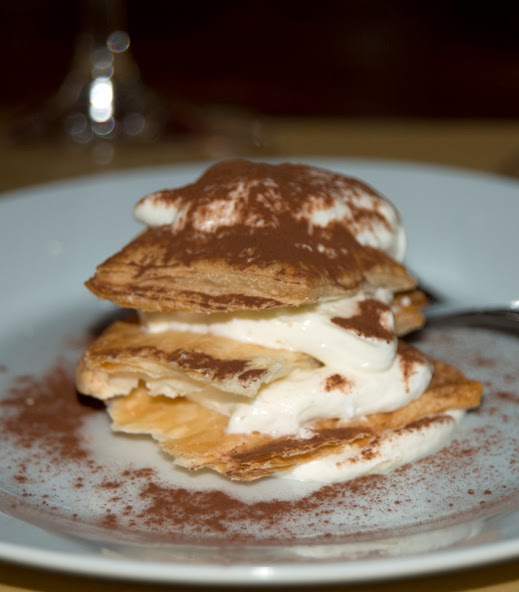 Of course, throughout the meal we were served a different estate wine with each course. The star of any winery in this area is the Brunello DOCG, which was truly exceptional here. However, my absolute favorite of these wines, and of the whole week’s wines, was their Rosso (means ‘red’ in Italian), which is their IGT. Oh my but it was delicious! My only regret is not buying a case of that ruby red jewel, it was so fruity and wonderful! I learned that Brunello means ‘brown’ in Italian and was the name of the local grape variety around Montalcino.

However, it was later scientifically proven that the Brunello grape was the same as the Sangiovese grape grown in other regions. This is a prime example of how the terroir, or climate, soil, air quality, etc., changes the taste of a grape and therefore a wine. The Italian powers-that-be decreed that the Brunello grape be called Sangiovese like the rest of the vines elsewhere. However, the wine’s name stayed the same.

Cyndie and I spied the ceramic pitchers on the table bearing the estate’s name. We SO wanted one of our own, but, alas, they were only for serving. These were gifts from a local potter friend. There were none for sale. Obviously they don’t get the merch expectations of American tourists! We tried to clue them in but I don’t think they believed us. 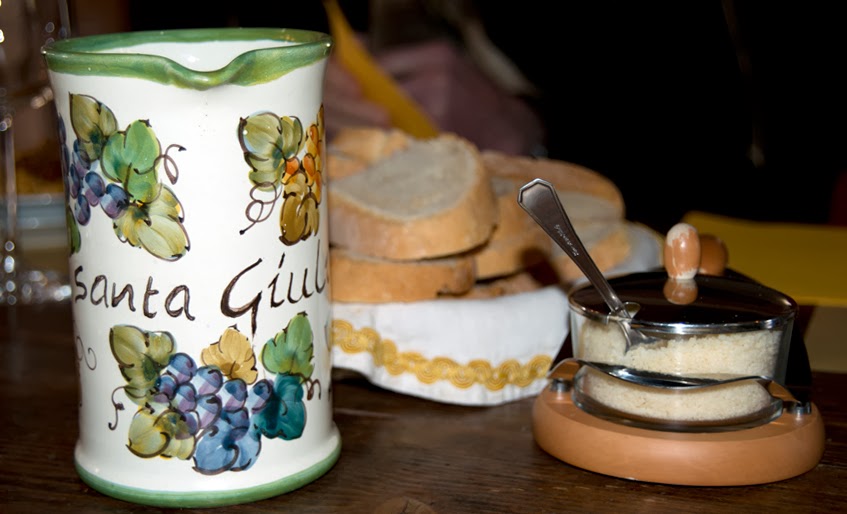 I asked Mama for her recipes as we were leaving. She immediately began rattling them off in Italian (she speaks no English) so Gianluca and Andrea had to haltingly translate for me. In my tipsy condition, I scrawled them down as best as I understood them and had Mama sign the paper. I’ve since transcribed my scrawlings into a typed sheet and hope to test them out in my own kitchen. I’ll let you know how that turns out. I think I’ll start with the ragù…

Reluctantly, we drove away from this beautiful little operation with full stomachs, slightly fuzzy heads, and the fondest of memories, promising to return one day. I know we will. 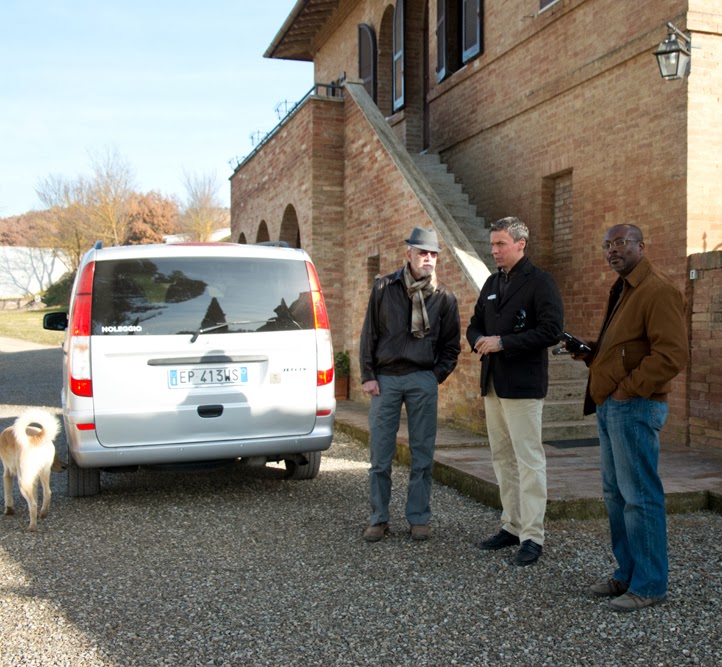 Leave me a comment and let me know what you liked most about Santa Giulia. Stay tuned for more Italy next time! 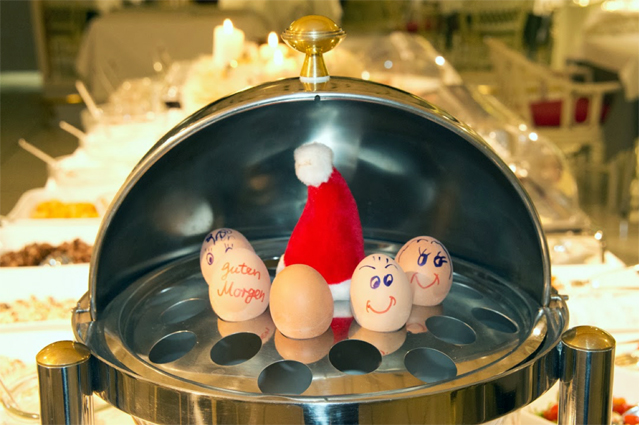