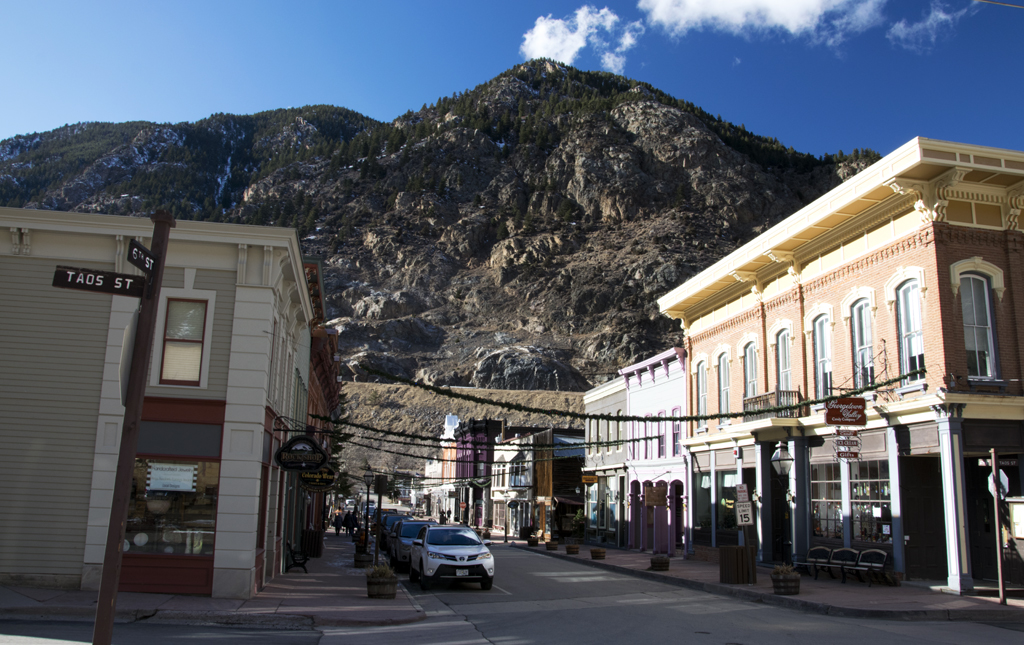 Previously I blogged about my very cool trip on the historic Georgetown Loop steam train. Although the train bears the name of Georgetown, I didn’t visit the town at that time. The closest I got was the well-traveled and very modern rest area off I-70. And I will say that the rest area is very much worth a stop because of its welcome center. Not only does it have the requisite bathrooms, it also has art displays from museums and shops nearby, as well as a surprisingly well-stocked gift shop. Outside are coin-operated viewers that you can look through to try to spot bighorns on the mountains opposite. 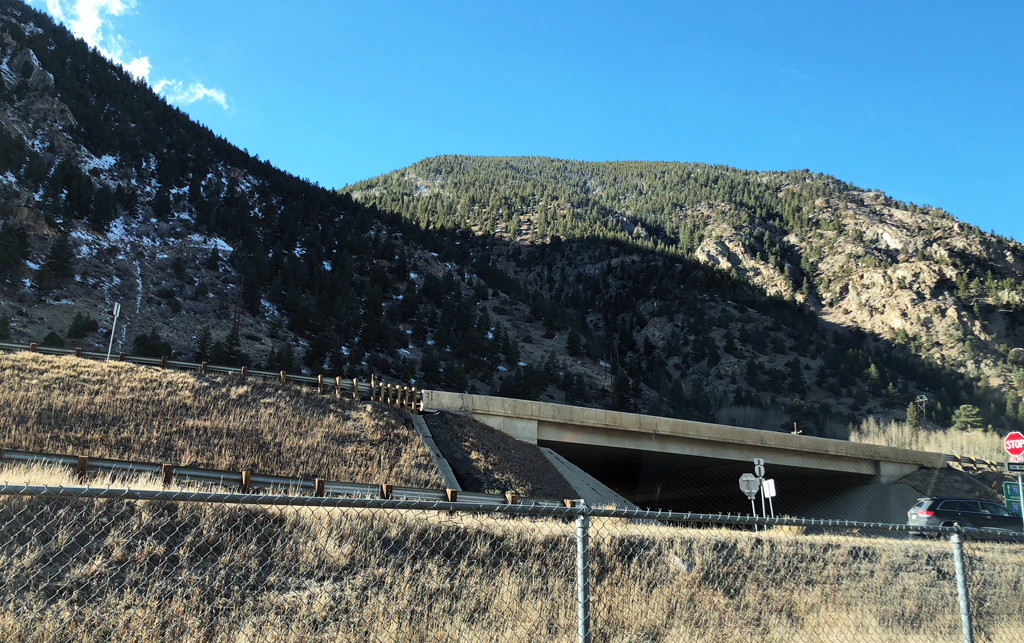 But back to the town itself. A friend and I went there to just look around recently, hoping to see bighorns on the mountains. Unfortunately, there were none that day, but we ventured further into town and saw its wonderfully charming Old West streets.

Georgetown has just over 1000 inhabitants and its elevation is 8,530 feet. It was founded in 1859 during the Pike’s Peak Gold Rush, but grew the most after silver was discovered in nearby mountains in 1864. The train I mentioned above served mainly to tote the silver ore out of the mountains.

Anyway, the town today is very quaint and charming, although there wasn’t much happening when we were there. It was mid-afternoon on a weekday, so hardly anyone was about. You could see Christmas decorations just going up (it was early November), and the afternoon light was magnificent. 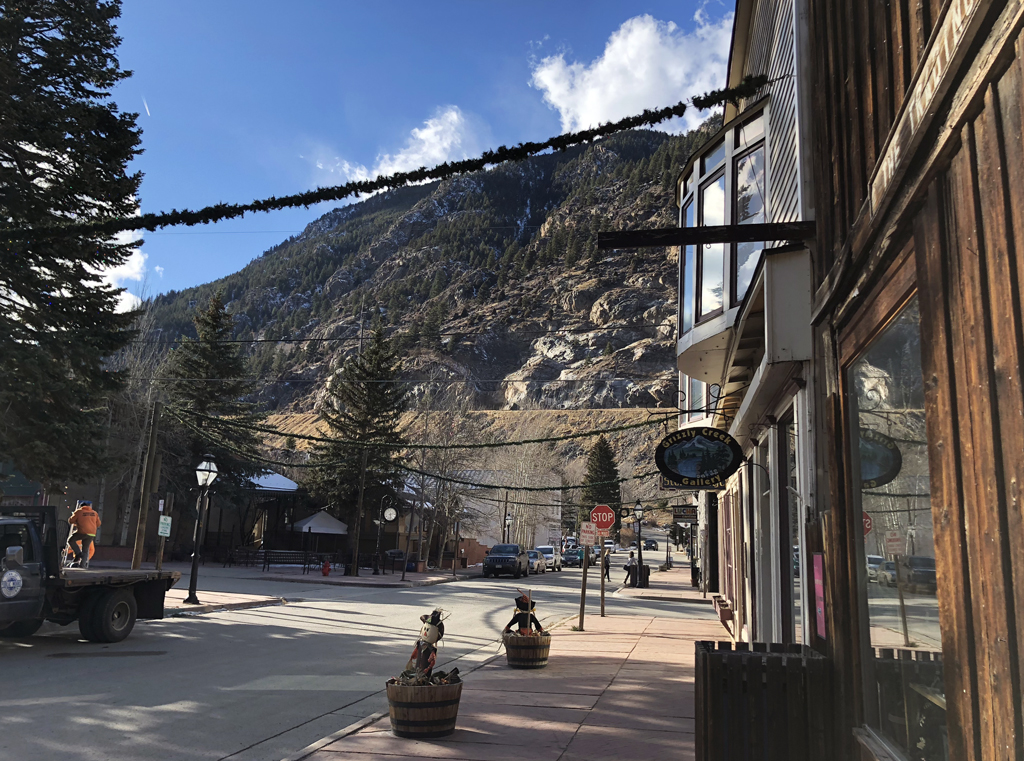 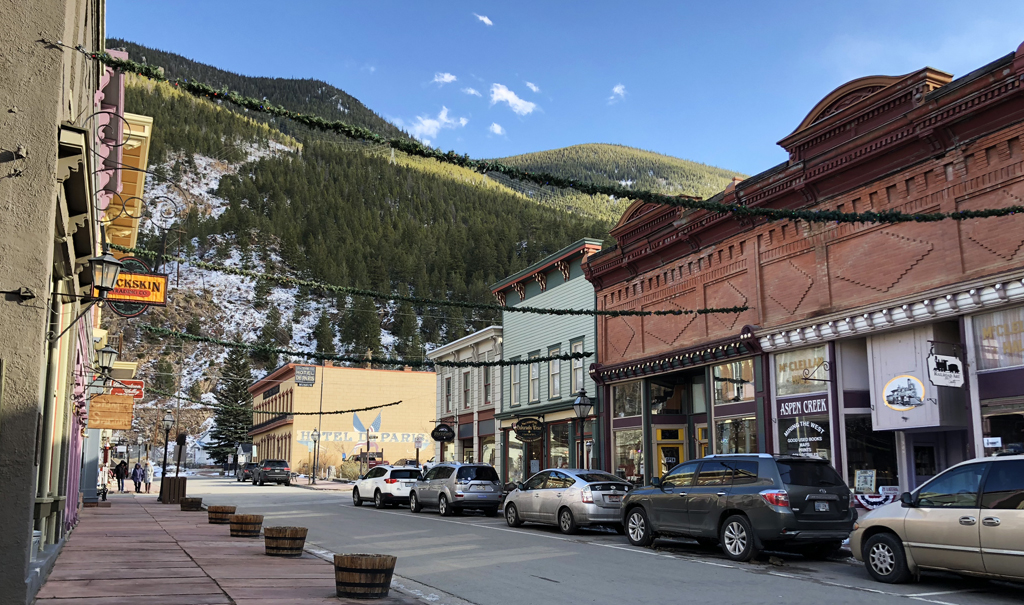 We stopped in a t-shirt shop that had a coffee bar. The shirts were very reasonably priced, so we each got one or two. I think my friend returned a few days later to buy more for gifts! 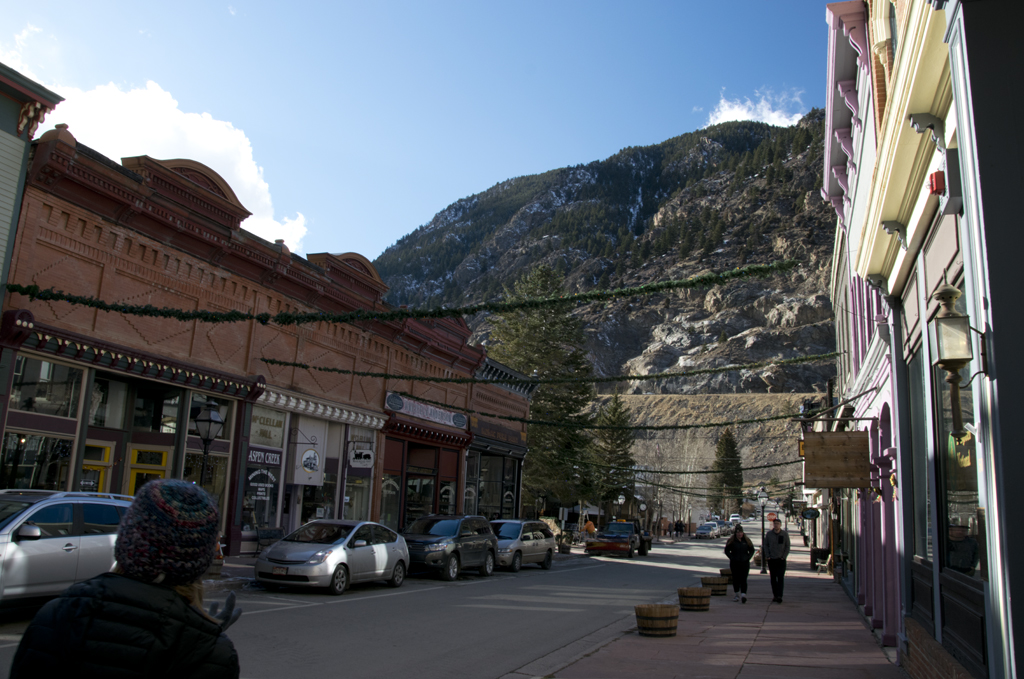 Here is my favorite building, which we decided looked like a brothel, with it’s purple paint job. It had a gift shop on the ground floor and apartments above. Most of the shops on the historic streets had apartments above them. 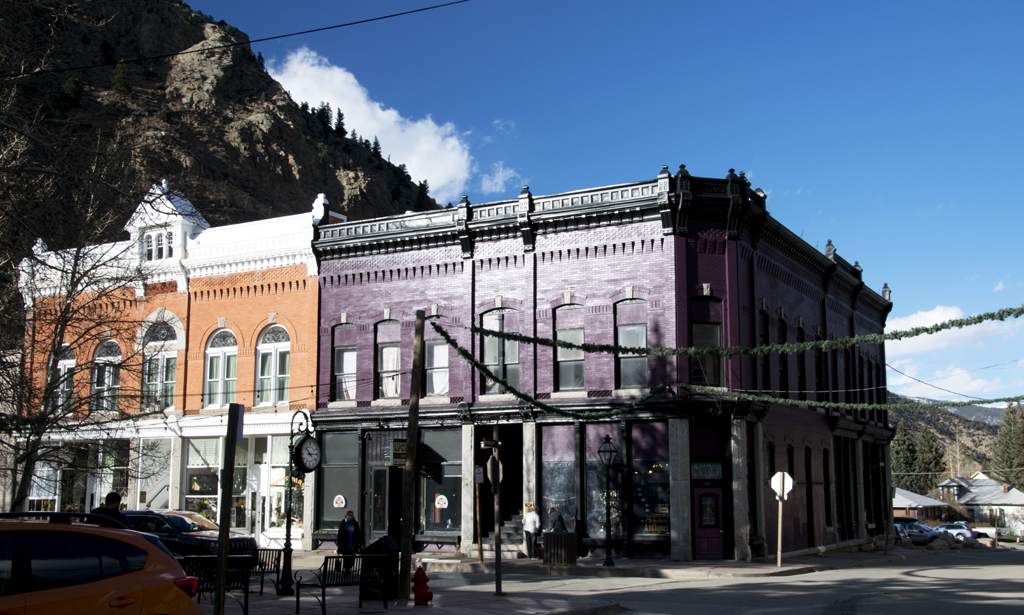 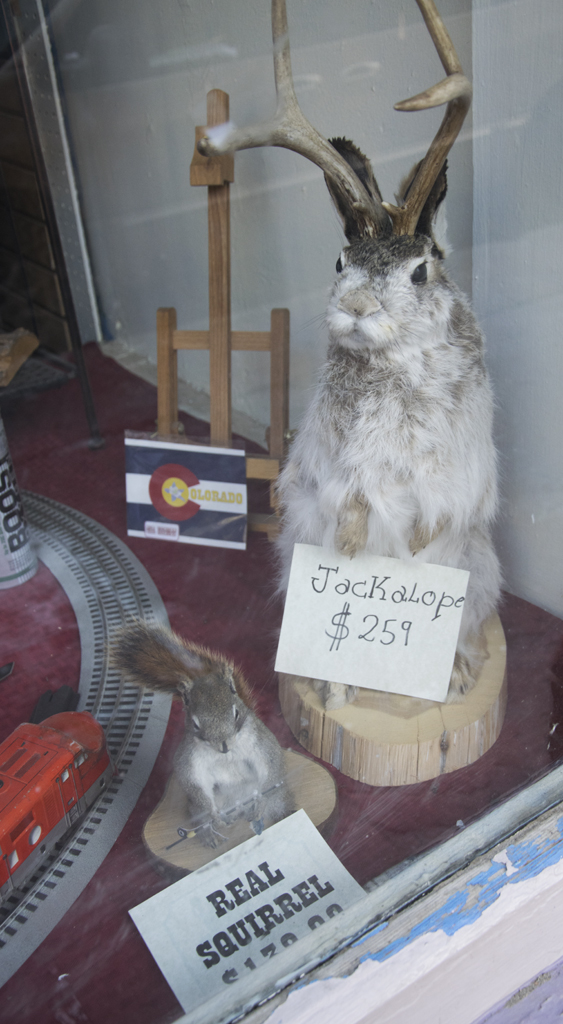 We drove past some residences to the train station where you can catch the steam train when it’s running. It’s a very short drive from the historic district. No one was around, though, that day.

I learned that John Denver filmed a Christmas movie here, released in 1986, called The Christmas Gift. Have you seen it? I don’t think I have. Regardless, every October, there is a tribute celebration to John Denver in Georgetown, with his music and showings of the film. Georgetown’s event, I think, precedes Aspen’s John Denver celebration by one week every year. 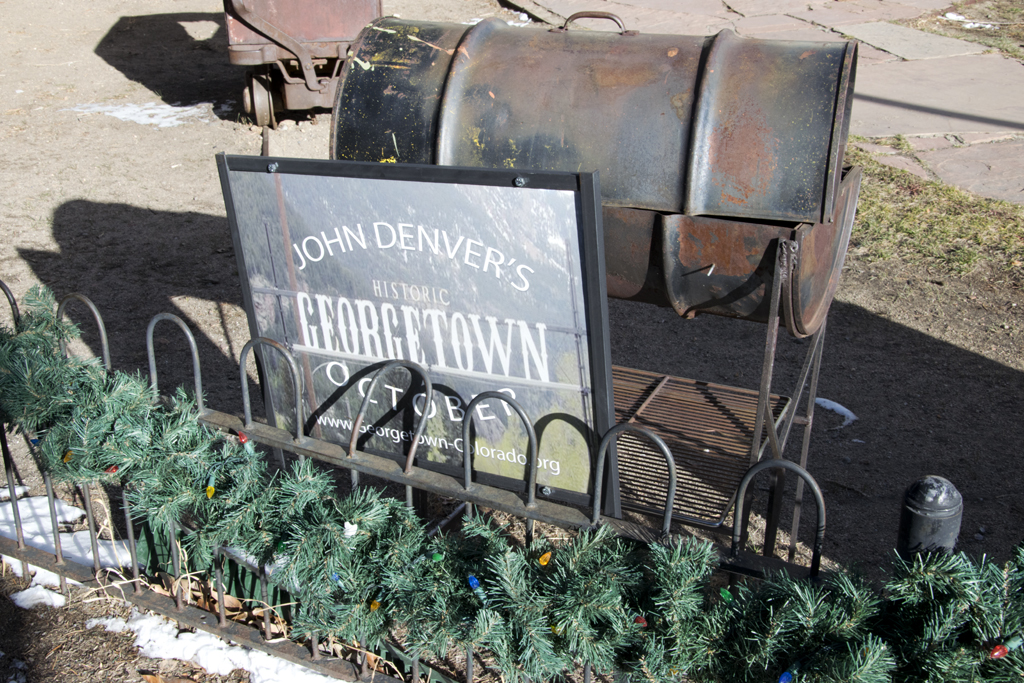 I was definitely surprised to see how photogenic little Georgetown is! I’d recommend a short visit, or even a pilgrimage to the John Denver event in October. At least visit the rest area! 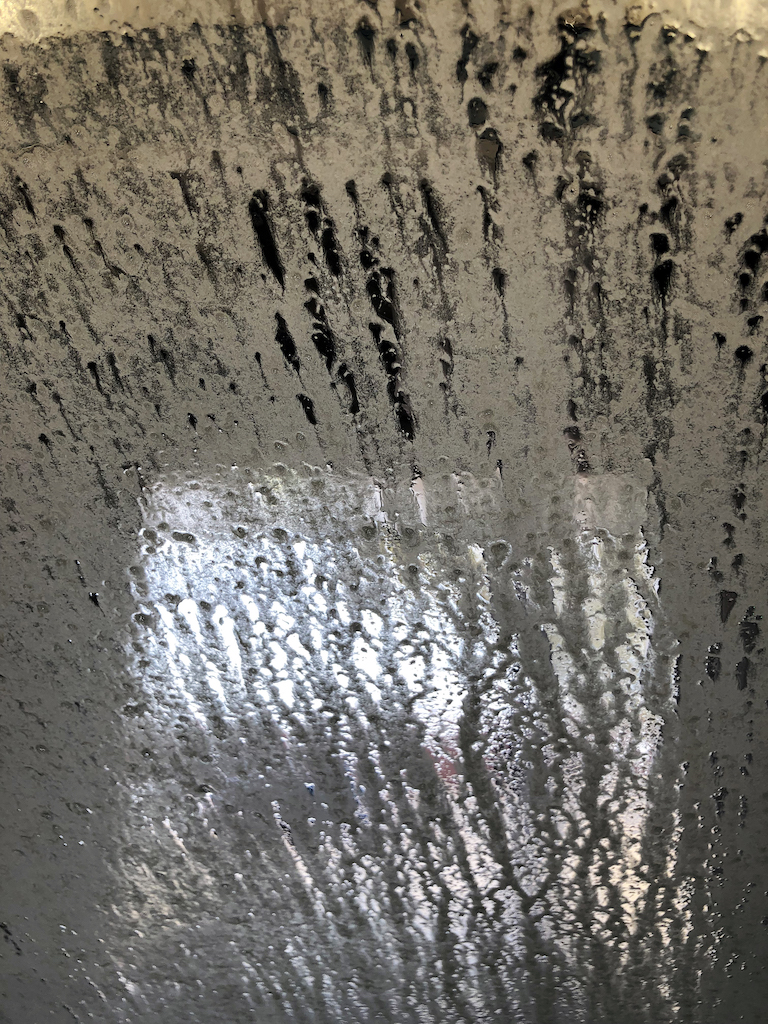