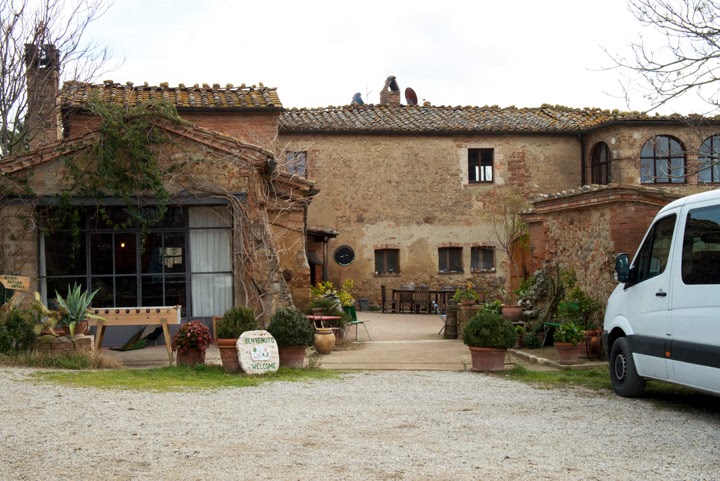 In preparation for my latest book coming soon, be sure to get your

Photos for No Apparent Reason (PFNAR) 2017

I’m writing this from my apartment near Munich, Germany. It’s pitch dark outside, though it’s only 6pm here, and very cold. My husband is downtown attending his German course, so I’m alone in the apartment. It’s very quiet here just now except for the muffled, contented melody of someone practicing a violin in the apartment adjacent to ours. As someone who, without a doubt, prefers living in my own house, I can appreciate that there are sometimes small delights about apartment living.

But today I want to recount to you the story of visiting an organic farm in Tuscany in December. My friend Cyndie and I were chauffeured by Roberto, a very outspoken yet knowledgeable guide. The name of the place is Podere il Casale, which translates to, interestingly, “the farm house.”

Before we arrived at the farm, we rode about an hour over progressively smaller and smaller roads until we ended up on a very, very long gravel driveway. We weren’t sure we weren’t being taken out in the woods never to be seen again.

However, we survived and I want you to get a sense of the landscape that surrounded us. The following photos are not very good, having been shot from the window of a moving vehicle, but I hope you can get an idea of the beautiful Clay Hills region in Tuscany, in case you missed it in my post about the Santa Giulia wine estate nearby: 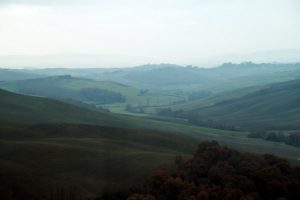 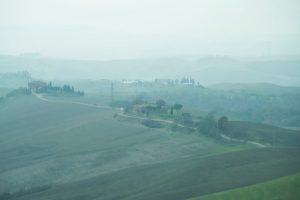 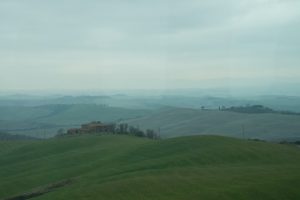 Podere il Casale is southeast of Siena between Pienza and Montepulciano. It is located high upon a hilltop. To complete your Tuscan landscape experience, here’s a 360-degree panorama video I shot from atop the hill. The man you see in the photo and hear on the phone is Roberto, our tourguide. It was quite windy, but, if you listen closely, you can hear the distant tinkling of bells on goats somewhere close by:

360 Pan of Landscape at Podere il Casale, Italy from Karren Tolliver on Vimeo.

By the way, the white sheepdog in the video is not dead, just really old. You can hear him barking at Roberto at the end of the video.

I should tell you that this area, and Pienza in particular, is famous for its pecorino cheese. We visited Pienza while in Italy and I can tell you it really does smell like cheese there! Pecorino is such a part of Pienza’s identity that they have an annual pecorino rolling competition each September. And the locals pooh-pooh the ‘romano’ variety that is so common in American supermarkets. The pecorino made in this area is ‘pecorino toscano.’

‘Pecorino’ comes from the Italian word for ewe, and, indeed, the cheese is made from ewe’s milk. As with the wine designations, the Italians have consortiums that regulate the cheeses, too, and Tuscan pecorino is no exception. For it to be authentic, it must be made from 100% ewe’s milk. It can be eaten fresh or aged. There’s a good description of the method of making it on the “Culture” cheese magazine website. Way to go with the wordplay, “Culture!”

Pecorino is a hard cheese that has a strong taste. Once you get past the smell, it’s really quite tasty. Be sure to pair it with a Tuscan red wine and maybe some proscuitto or bruschetta with lots of garlic. It’s also very good with fruit chutney or honey. If you need a good chutney recipe, let me know. I have a cherry-ginger one that’s fantastic with pecorino.

Anyway, we visited Podere il Casale because they make pecorino there. It’s an organic farm, which means their cheese is made with thistle enzymes instead of rennet, an animal product that helps the cheese coagulate. At certain times of the year you can see them make the cheese, but not at this time because all the ewes were pregnant or nursing and couldn’t be milked.

We did get to see a large group of ewes and lambs, though, and it was just joyful watching them! Two had to be hand-fed so we got to see that, too. A rather greasy yet enthusiastic farm worker gave us that demonstration. 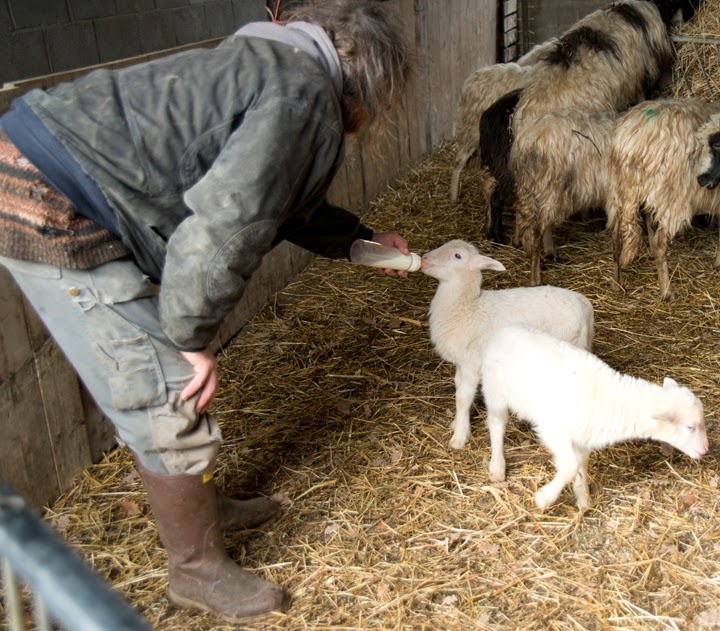 Roberto remarked that all those lambs were happy they weren’t born near Easter!

It was a little strange, but we didn’t see anyone else on the farm at all. I guess they were on Christmas vacation, like us. We only saw just a few peacocks:

Roberto also told us that the farm is part of a program that provides people from all over the world room and board in return for working there. Apparently they work with some organization that coordinates all that. I tried to find more details, but, aside from a brief, general mention of it on the farm’s website, I didn’t come up with anything. If you can afford the journey, you would have a place to stay. Sounds interesting – maybe you could learn how to milk sheep!

After showing us the lambs, Roberto led us to the cheesemaking facility. Even though we didn’t get to see them actually making the pecorino, we did get to see the extremely sanitary processing equipment and visit the aging room.

Poor Cyndie! She wasn’t feeling 100% that day, and I have to give her big ups for not losing consciousness when Roberto opened the aging room door! The smell just about knocked us over! Here’s my advice: NEVER visit a cheese aging room unless you have an iron stomach or have taken ginger pills or Dramamine. After that, I wasn’t feeling exactly 100%, either!

Fortunately for you, we don’t have scratch-n-sniff technology on your computer yet, so you can see the photos without fear: 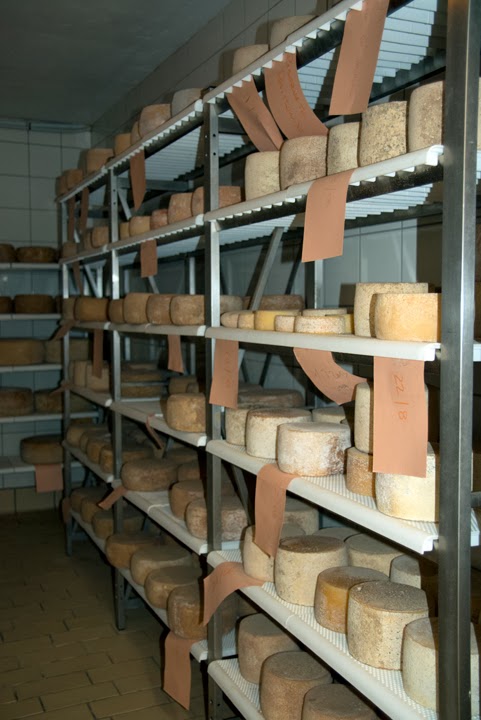 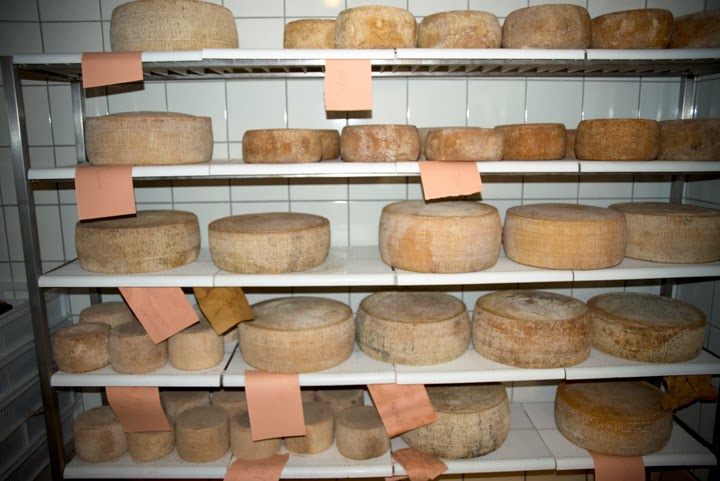 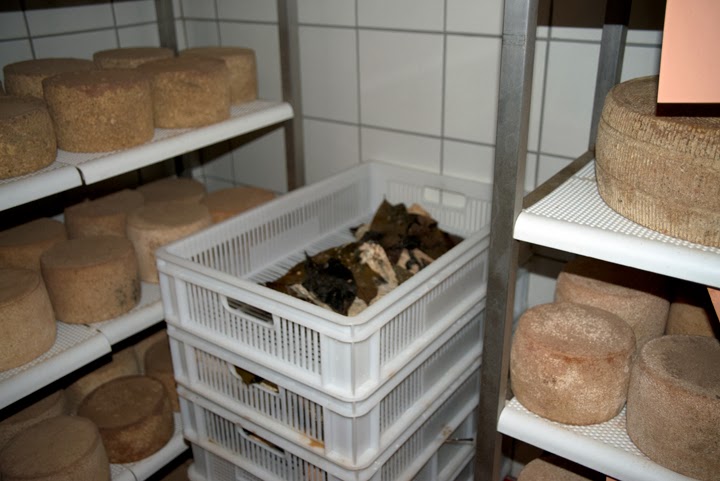 That black material in the corner crate is made of walnut leaves. Inside is pecorino aging to get the walnut flavor infused in it. They age the cheese in everything from straw to you-name-it. I read that they used to rub the rinds with lambs’ blood to make it red. These days it’s tomato sauce. The shops in Pienza have all of those for sale. It’s hard to decide what to buy, but fortunately you can sample it. It IS delicioso!

After the aging room we were happy to get back out into the fresh air. It was an interesting visit to an organic farm and I’m glad we saw as much as we did, given the time of year.

Thanks for reading. Leave me a comment! And stay tuned for next Wednesday’s travel/food story. I got lots to tell! 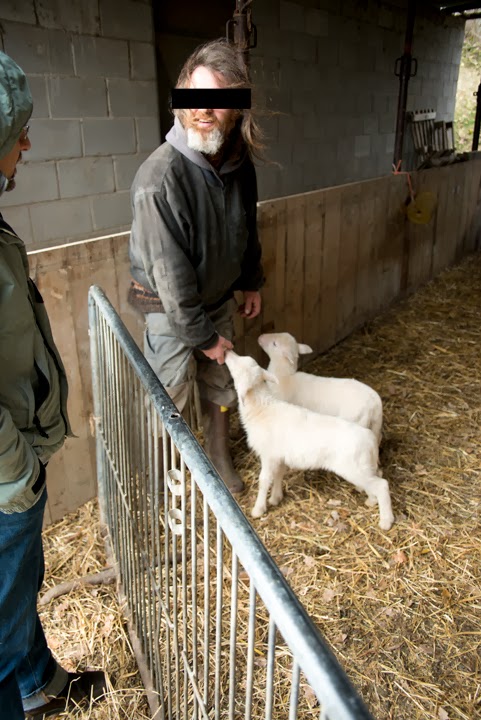