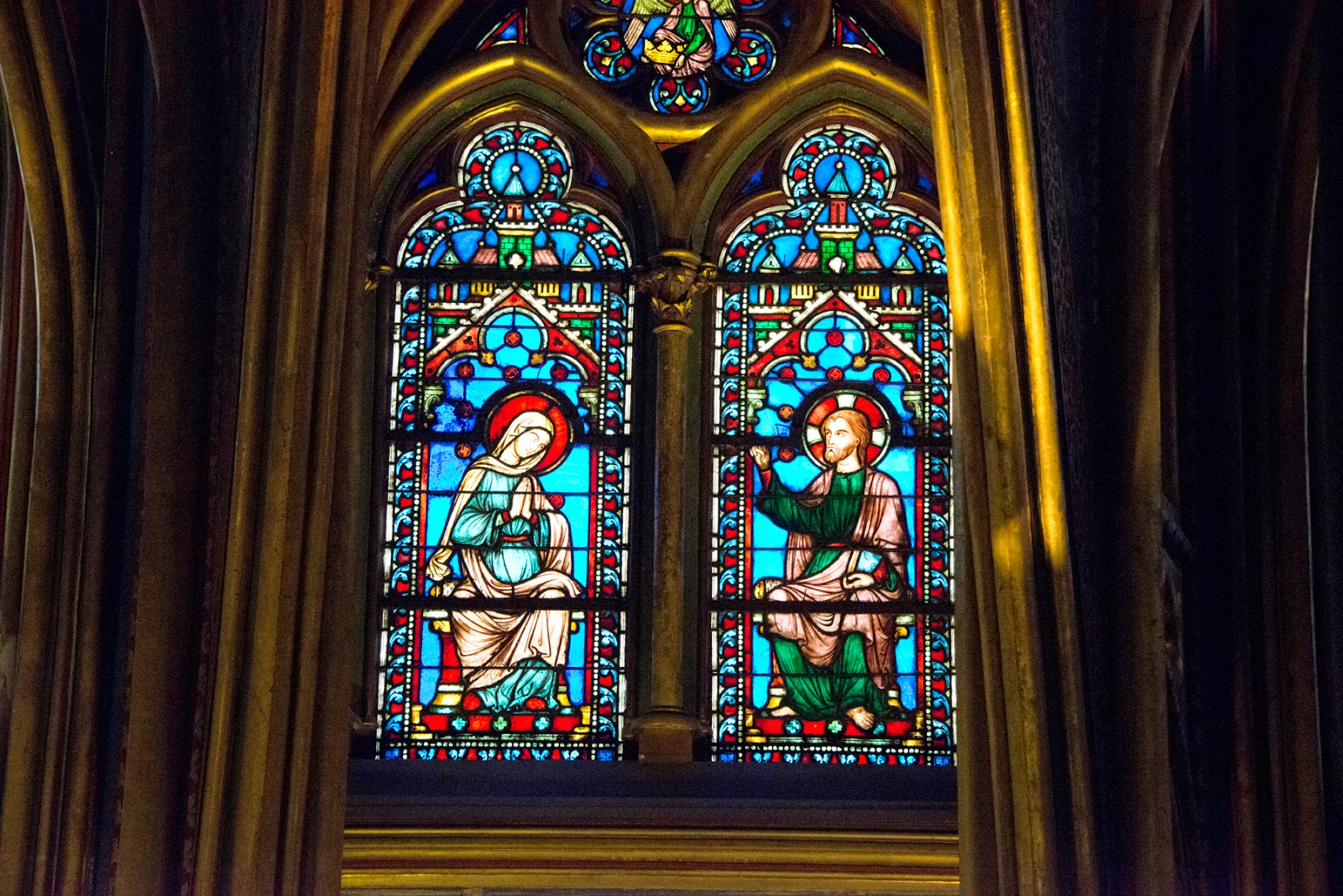 Hot off the presses:

is published! Get your copy today –

makes a great gift for you, the photographer or the weirdly-humored in your life!

This brings the PFNAR collection to four books!

While you’re at it, COLLECT ALL FOUR – click here for the rest!

I’m sure all of you made my guacamole recipe for Cinco de Mayo this week! If not, you don’t have to wait for a Mexican holiday to enjoy it. Go get your avocados as soon as you finish reading this blog post!

Unrelated to Cinco de Mayo but still exciting, I spent the last week in Paris with my husband and another couple, Cyndie and Bram, our dear friends from Florida.

It was my fourth visit to the City of Light and amazing, as usual. We did the town, including the major sights and a dinner cruise on the Seine. Today I’ll tell you about a wonderful chapel dating from the 1400s, La Sainte-Chapelle.

Someone had recommended we see “The Holy Chapel”, as the name translates, because of its stained-glass windows. I wasn’t aware of the chapel before last week, but it was only a few steps away from Notre Dame Cathedral on Paris’ island, Île de la Cité (Island of the City).

At our hotel, we piled into perhaps the fourth or fifth taxi of the week. I must tell you that the cab drivers in Paris are as diverse as the tourists who mob the city regularly, and each one interesting and terrifying in a different way. This one spoke less English than I do French but was really trying.

However, he absolutely REFUSED to hear us say “Sainte-Chapelle”; instead, he heard, and maddeningly repeated, “Saint Germain” each time we said “Sainte-Chapelle”. Saint Germain is an interesting Parisian district with restaurants, boutique hotels, shops, cafes, museums and galleries. But it isn’t in the same place as Sainte-Chapelle. The dialog went like this:

…and so on throughout the entire trip until we arrived in, you guessed it, Saint Germain! Finally, Cyndie thought to show him the name of the chapel on a printout she had.

Driver: “OH, you want Saint-Chapelle! Ok, that’s over there.” And we drove for another few blocks.

Fortunately it wasn’t far. We had him let us out near Notre Dame and the husbands got to tour the inside of the famous cathedral. Meanwhile, Cyndie chatted up a local gendarme for directions to the chapel. Presently we found ourselves in a line waiting at the entrance to, finally, Sainte-Chapelle (not Saint Germain).

The reason for the line was that all visitors have to go thru a security check. After the unpleasantness at Charlie Hebdo last year, I saw a lot more police and soldiers patrolling the city. The security here was especially tight because the chapel is inside the Palace of Justice complex.

A little Parisian history: In the first century BC the Parisii tribe settled this small island (Île de la Cité) in the middle of the Seine in what is now the center of Paris. From the 10th to the 14th Centuries there was a royal palace on the island. Sainte-Chapelle was built as the chapel of this palace. The other surviving part of the palace complex is the Conciergerie, a former prison (now museum) where Marie Antoinette spent her last 76 days. A newer palace building (1868) on the site is now the Palace of Justice, which is France’s center of judicial activity.

So, with all those judges, lawyers and legal and legislative types around, the X-ray machines are deemed necessary.

Once through security, we found ourselves in yet another line for tickets! Fortunately the lines moved fairly quickly. Also, waiting for tickets gave me a chance to examine the outside of the medieval chapel, surviving from the year 1248. She had me at gargoyles! 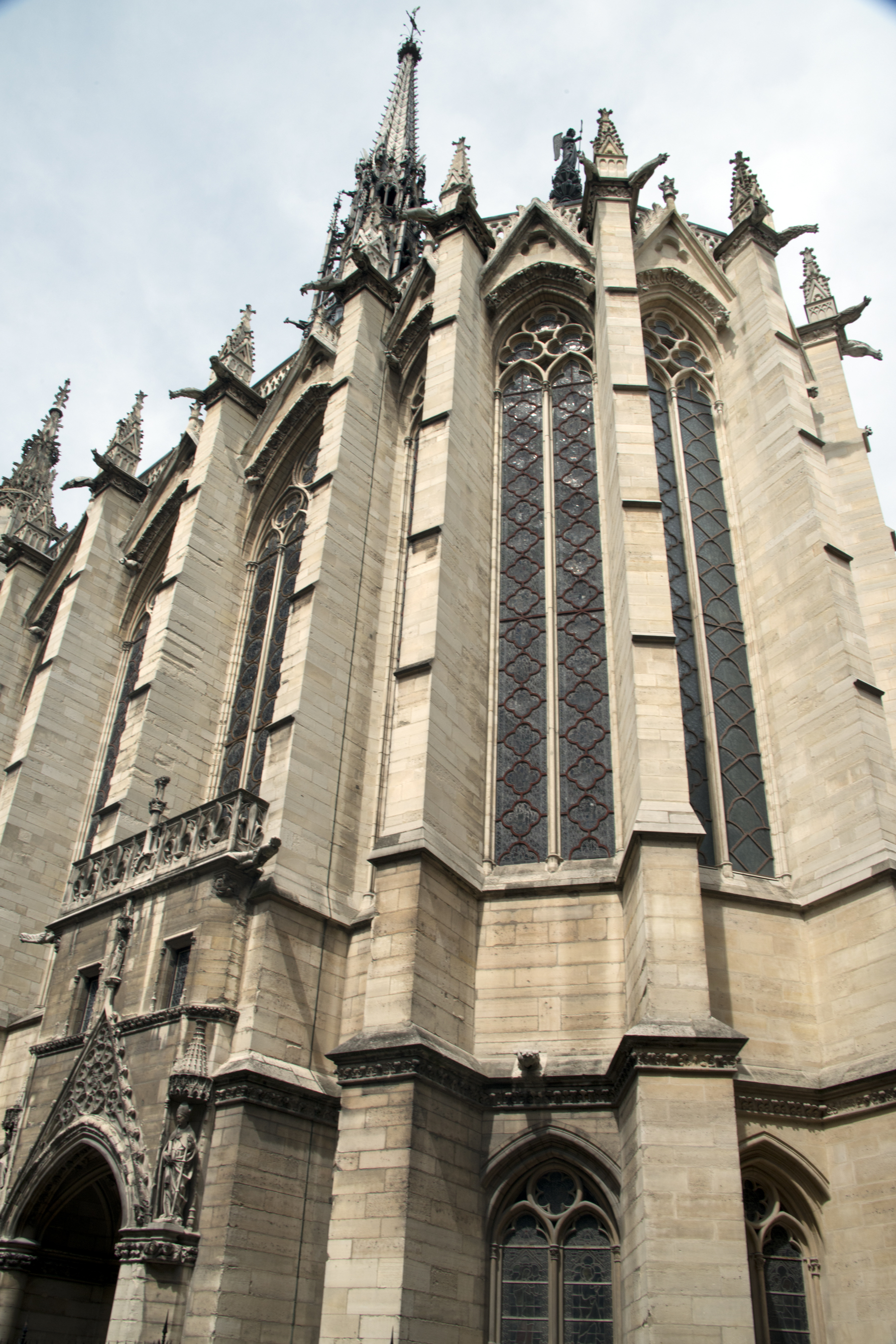 I am thrilled to report that my new zoom lens allowed me to get up close and personal with them: 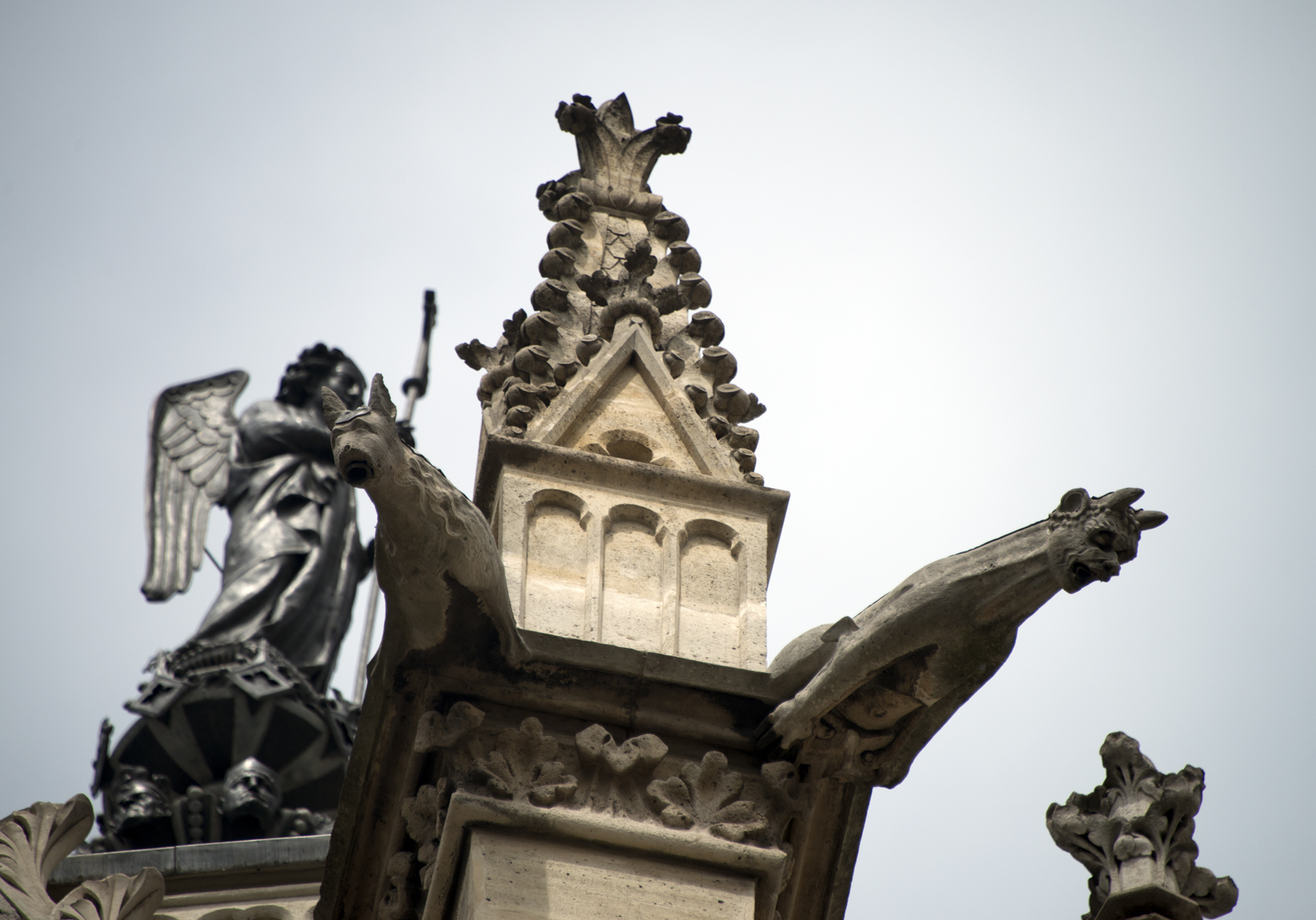 Here’s the facade and entry portal: 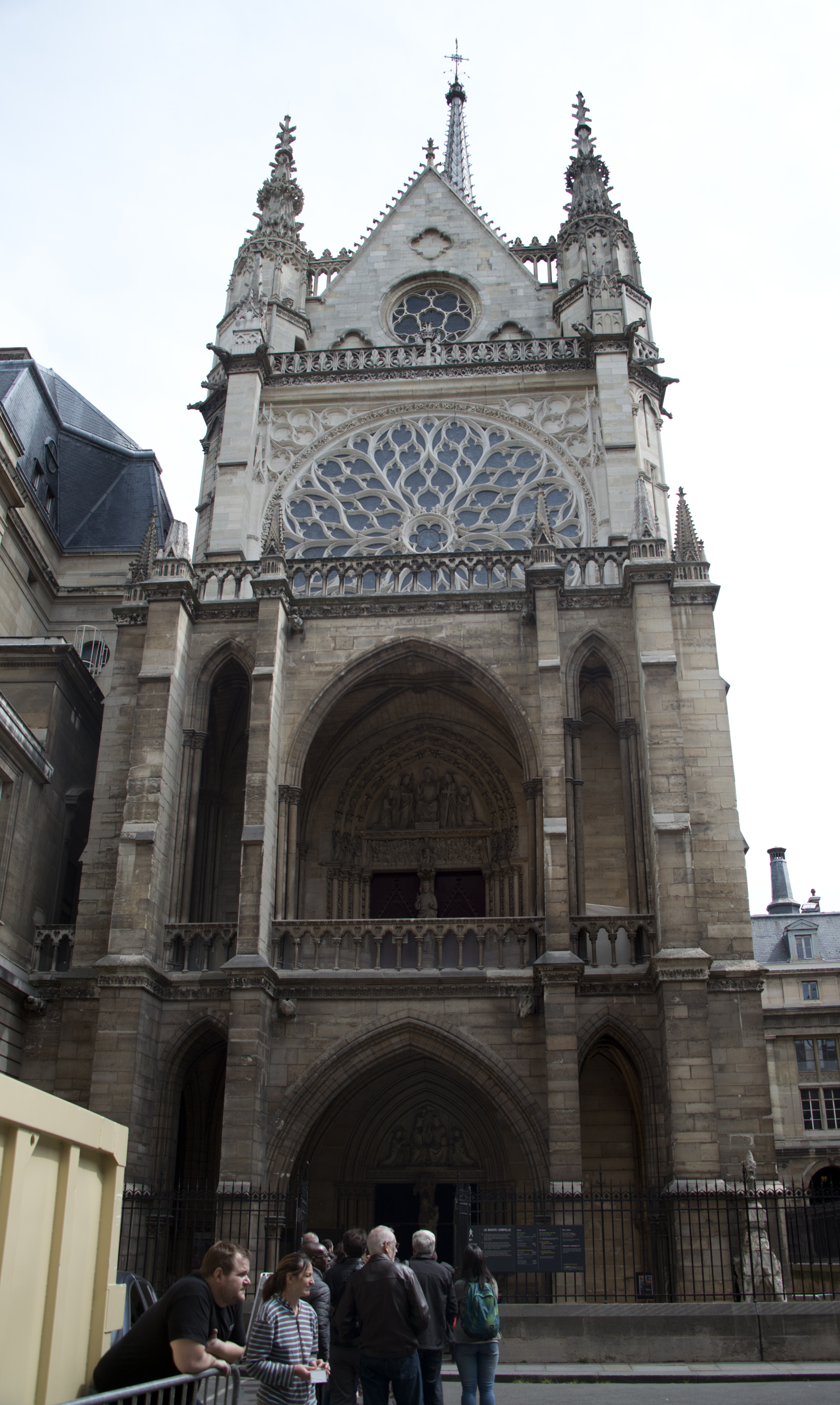 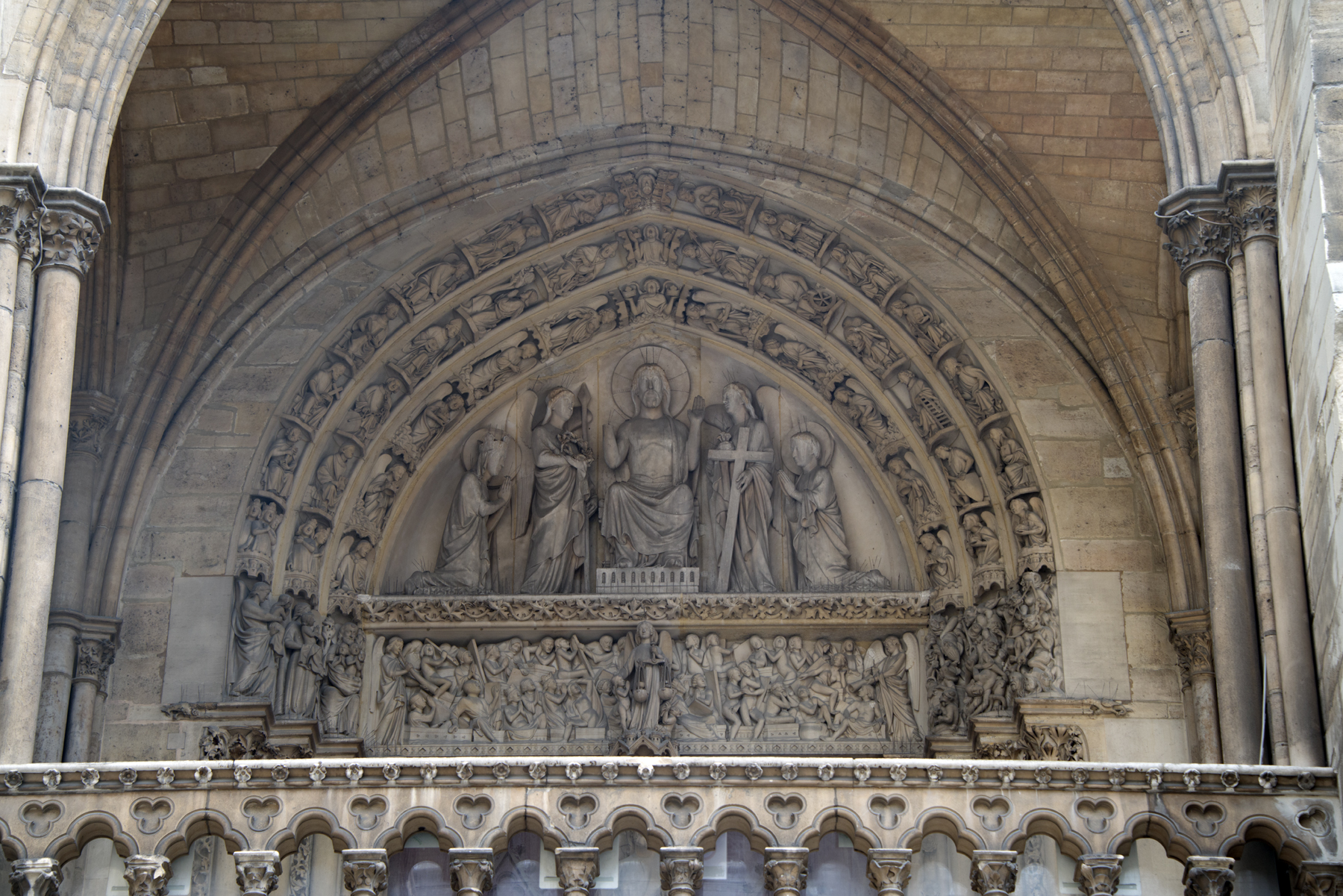 …and the little creature guarding it (if anyone knows the name of this guy, please let me know; I think I’ve seen a similar sculpture in other places): 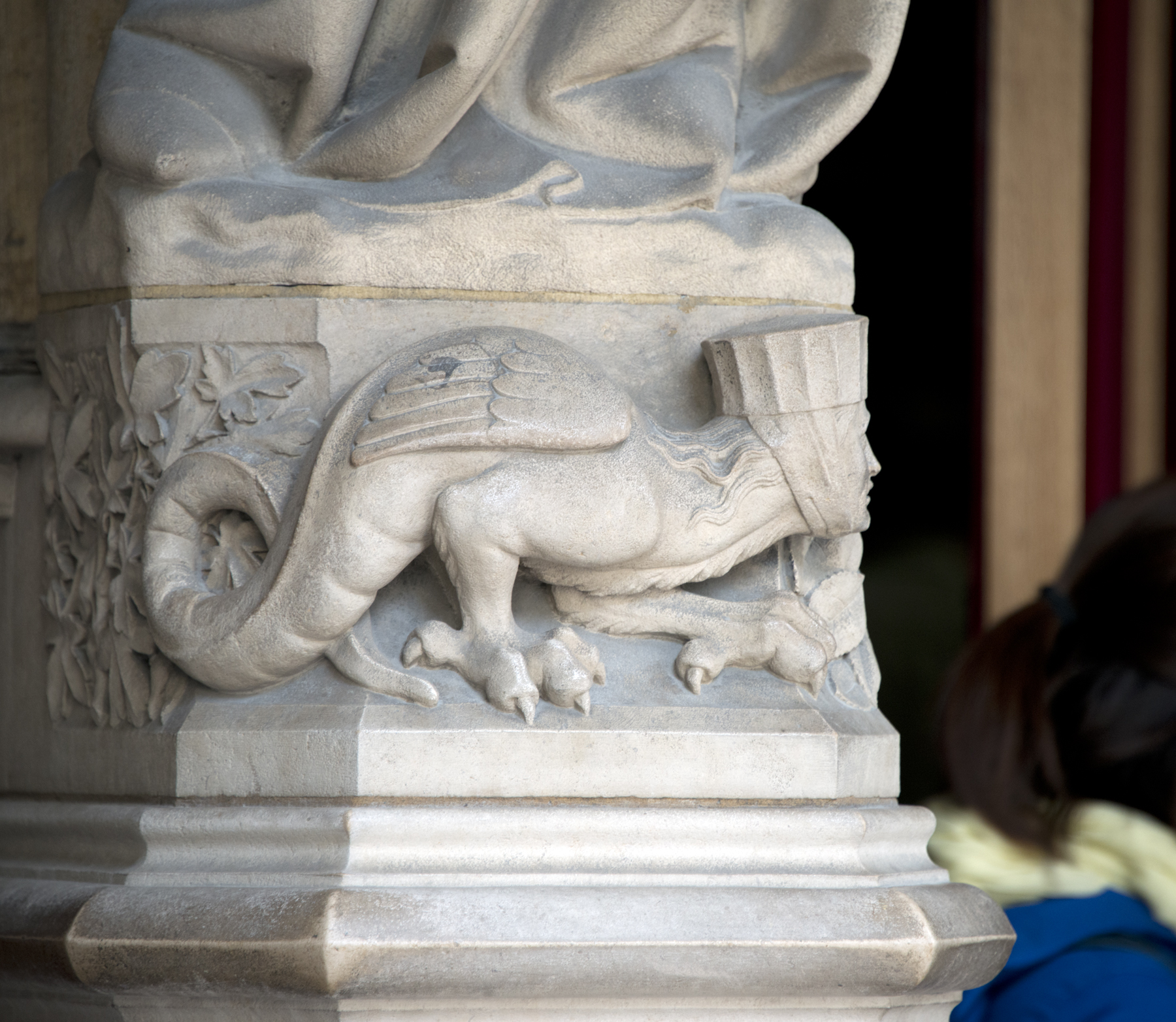 Finally we found ourselves inside. The chapel is actually two chapels in one. The lower one, where we entered, was for servants and the upper one was for the royals themselves.
Even the lower chapel for underlings was impressive: 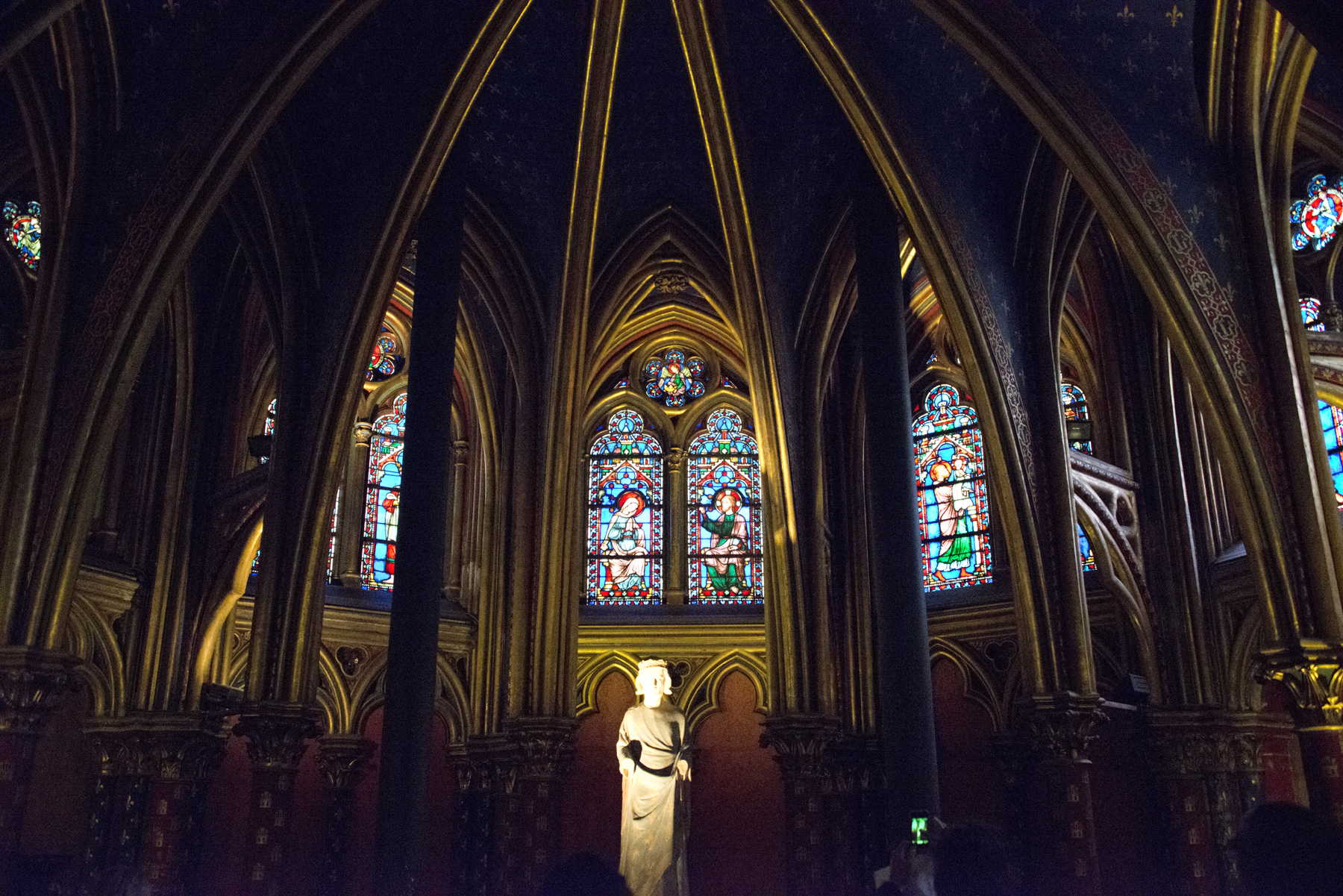 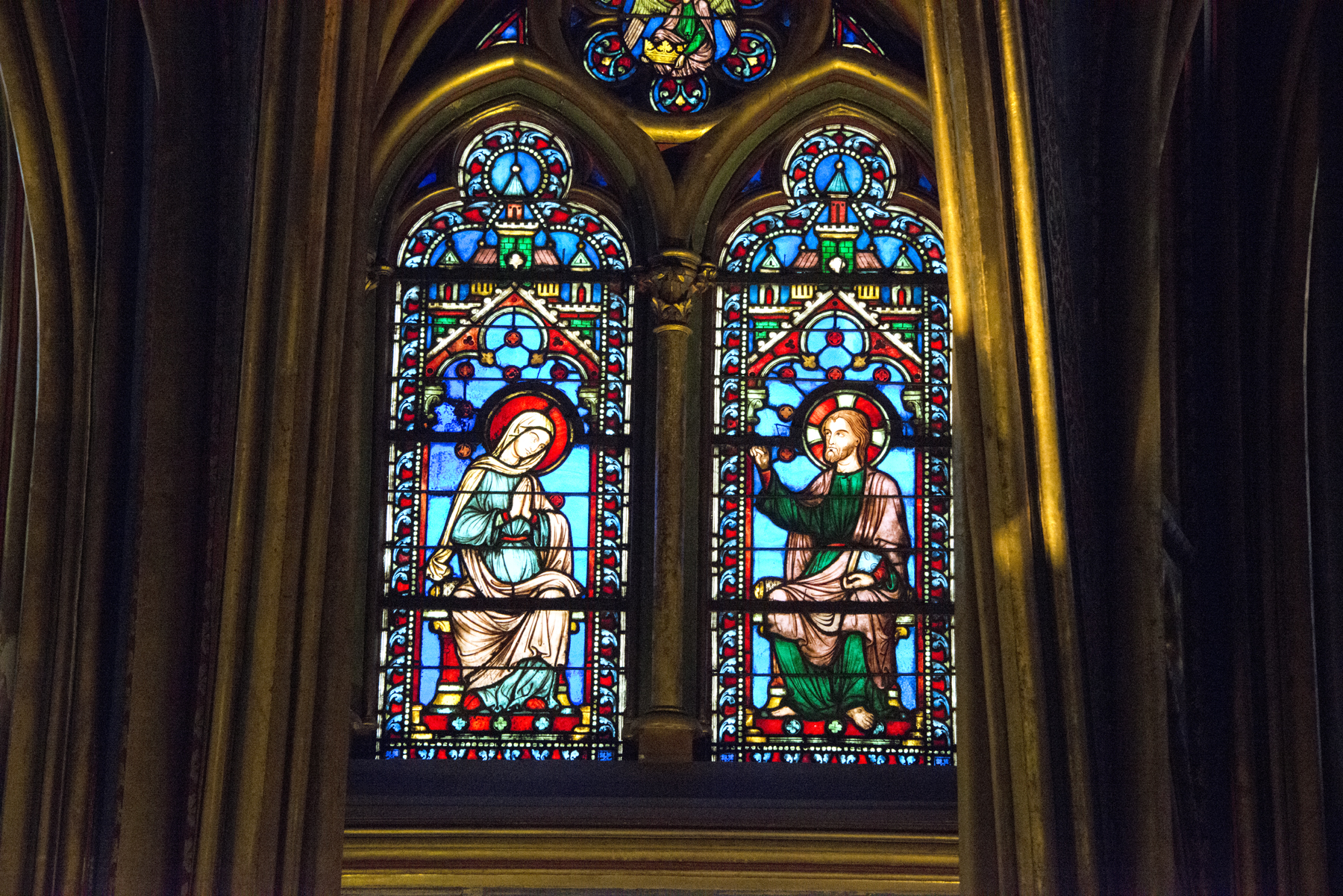 The decor reminded me of Moroccan design, with rich colors and repetitive patterns. But the proliferation of the fleur-de-lis was unmistakably French: 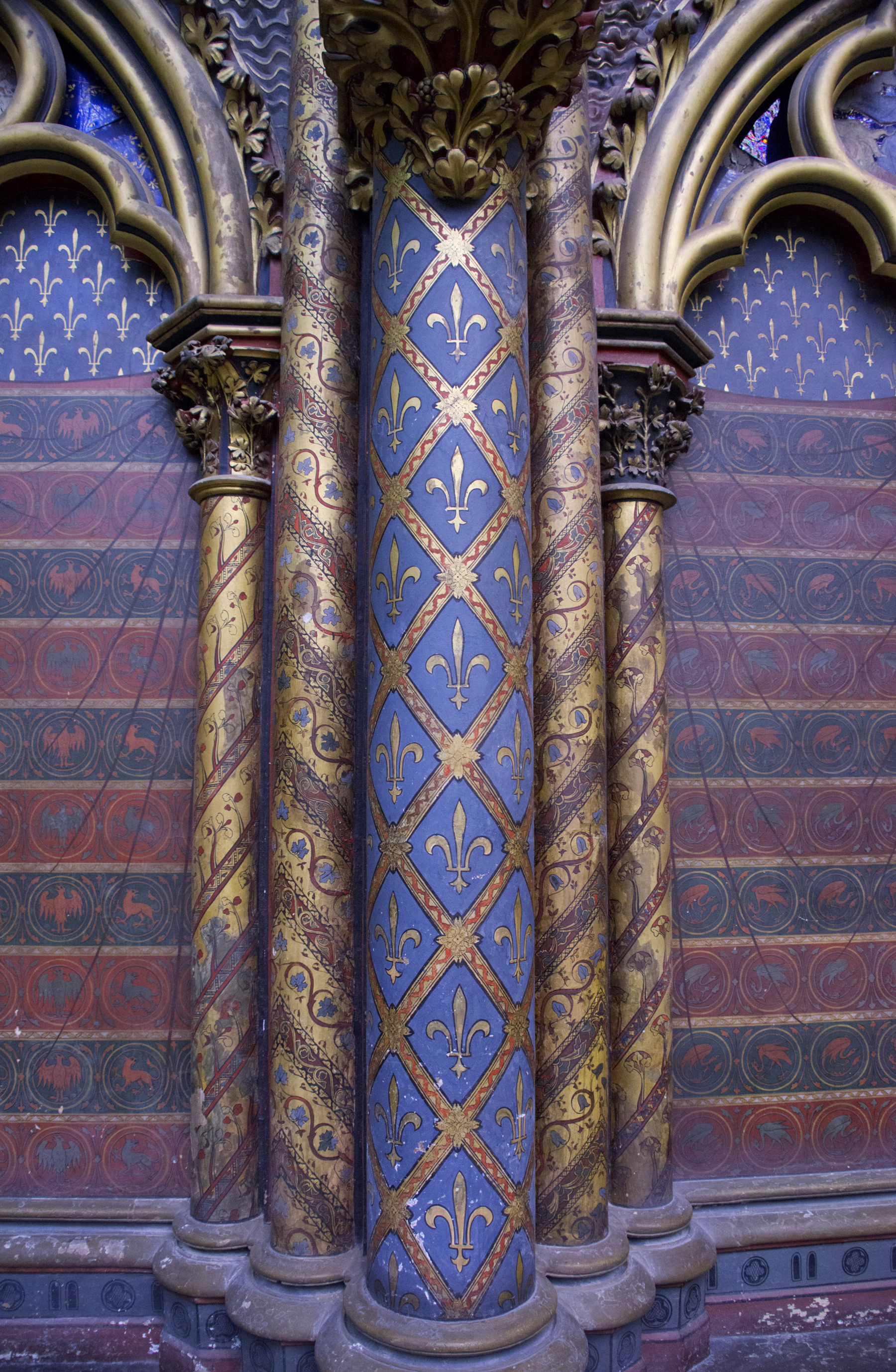 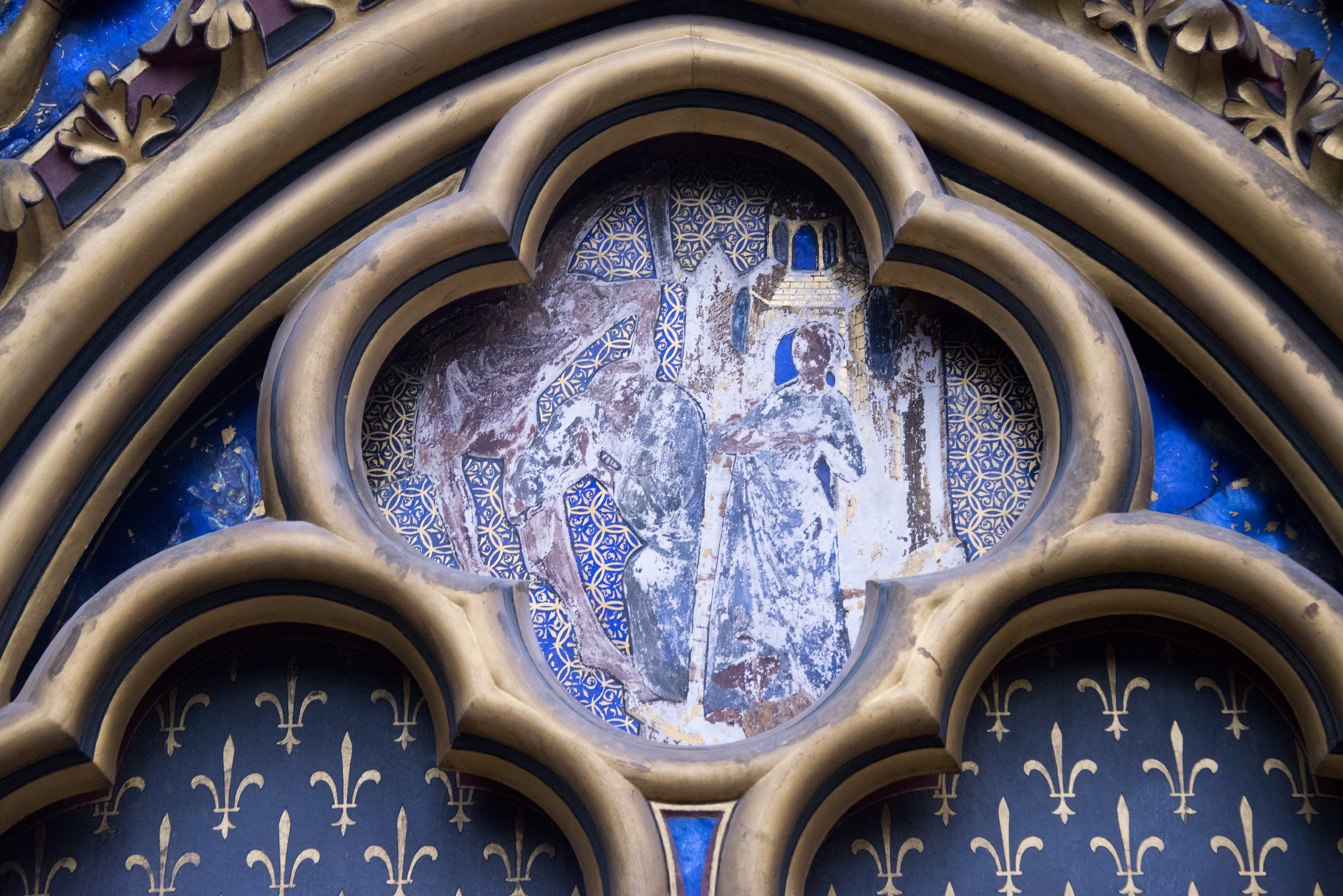 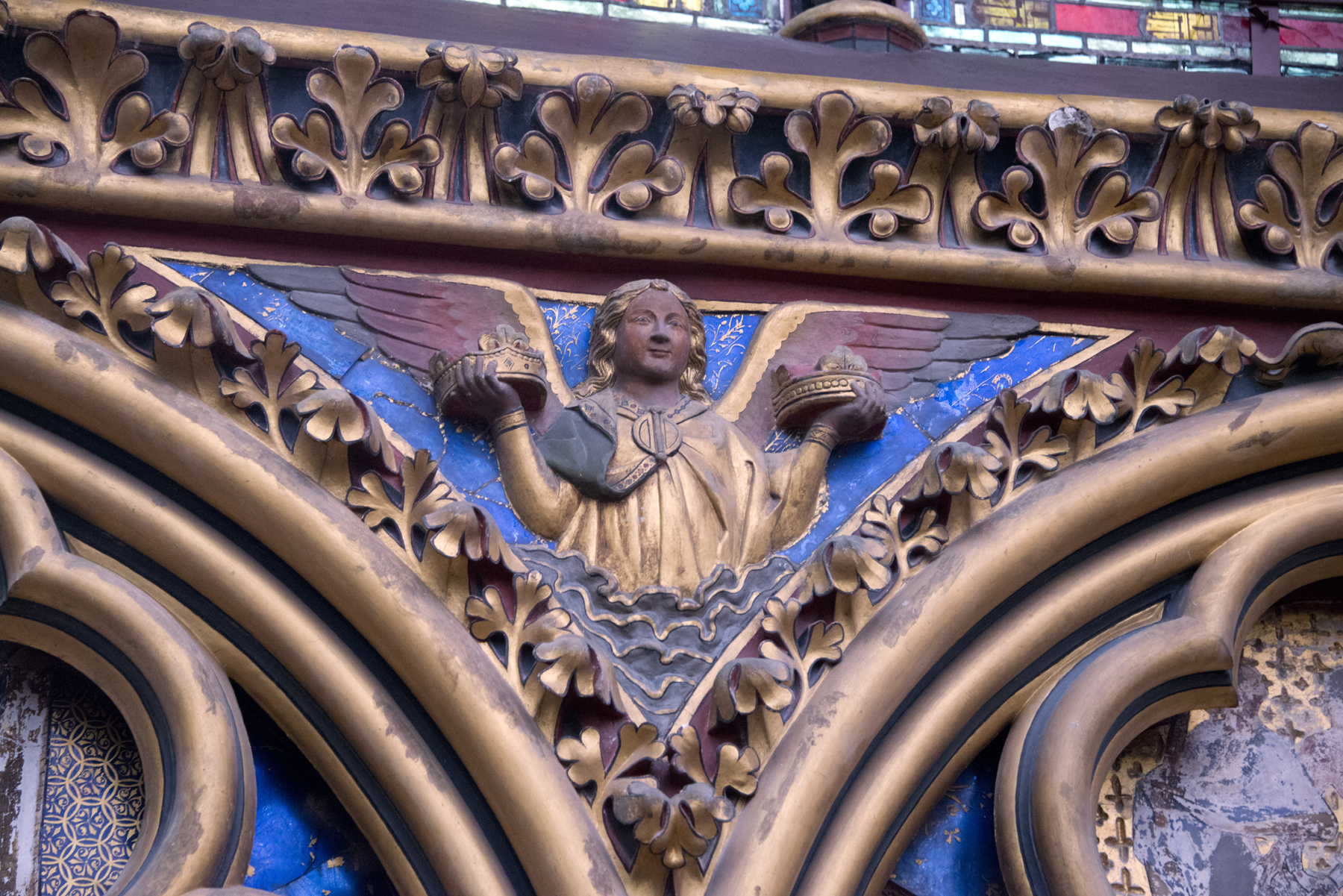 The chapel was built by King Louis IX, the future Saint Louis, to house Christ’s purported crown of thorns and other relics of the passion of Christ, which the chapel brochure leads you to believe were purchased for a price higher than the cost of the chapel itself!
We made our way up a narrow, claustrophobic, wooden spiral staircase to the upper chapel, home of the relics back in the day. Of course now, after some destruction, theft and restoration, the remaining relics have been moved to Notre Dame cathedral.
This upper chapel has much higher vaults and tall, stained-glass panels that seem to reach the sky. 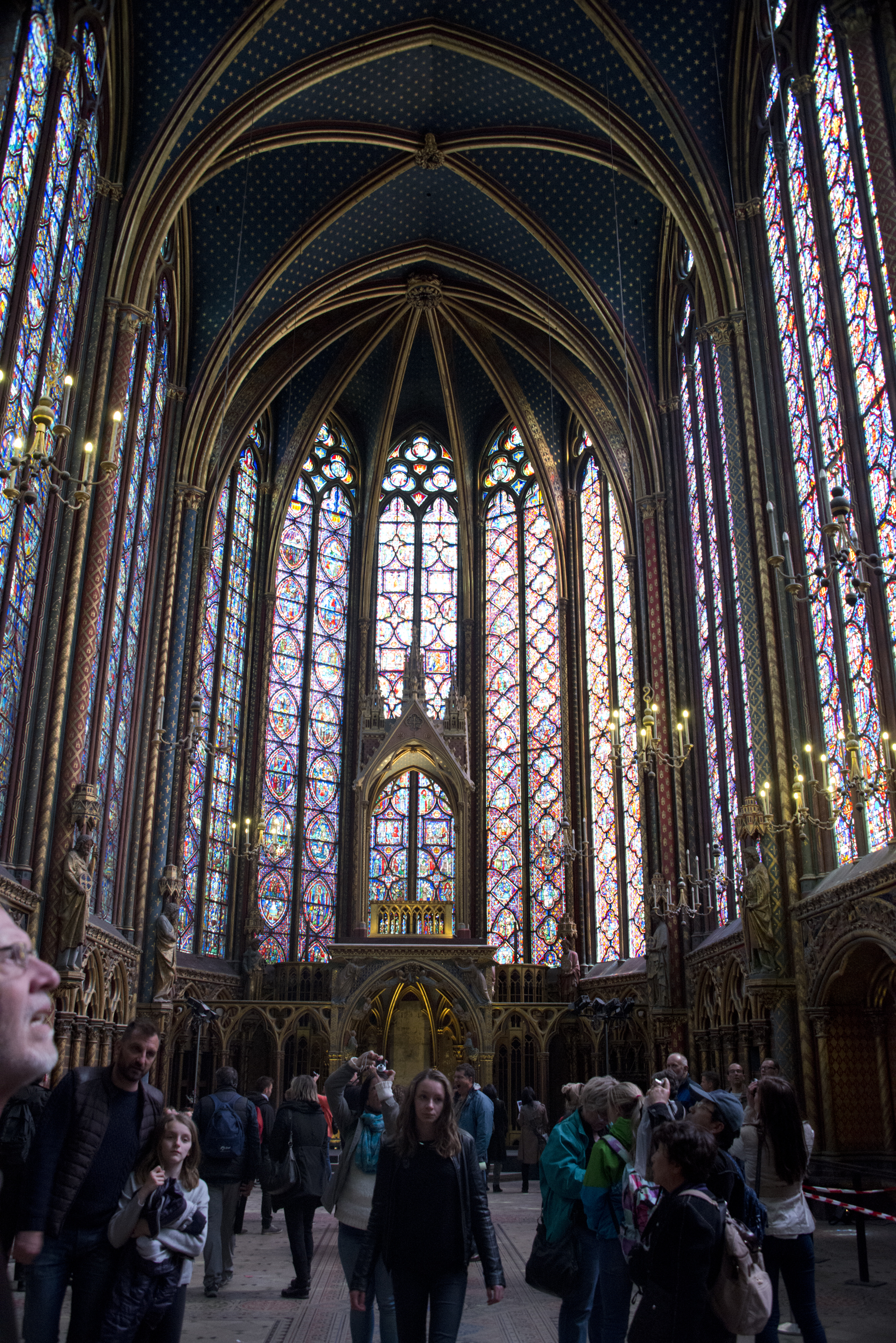 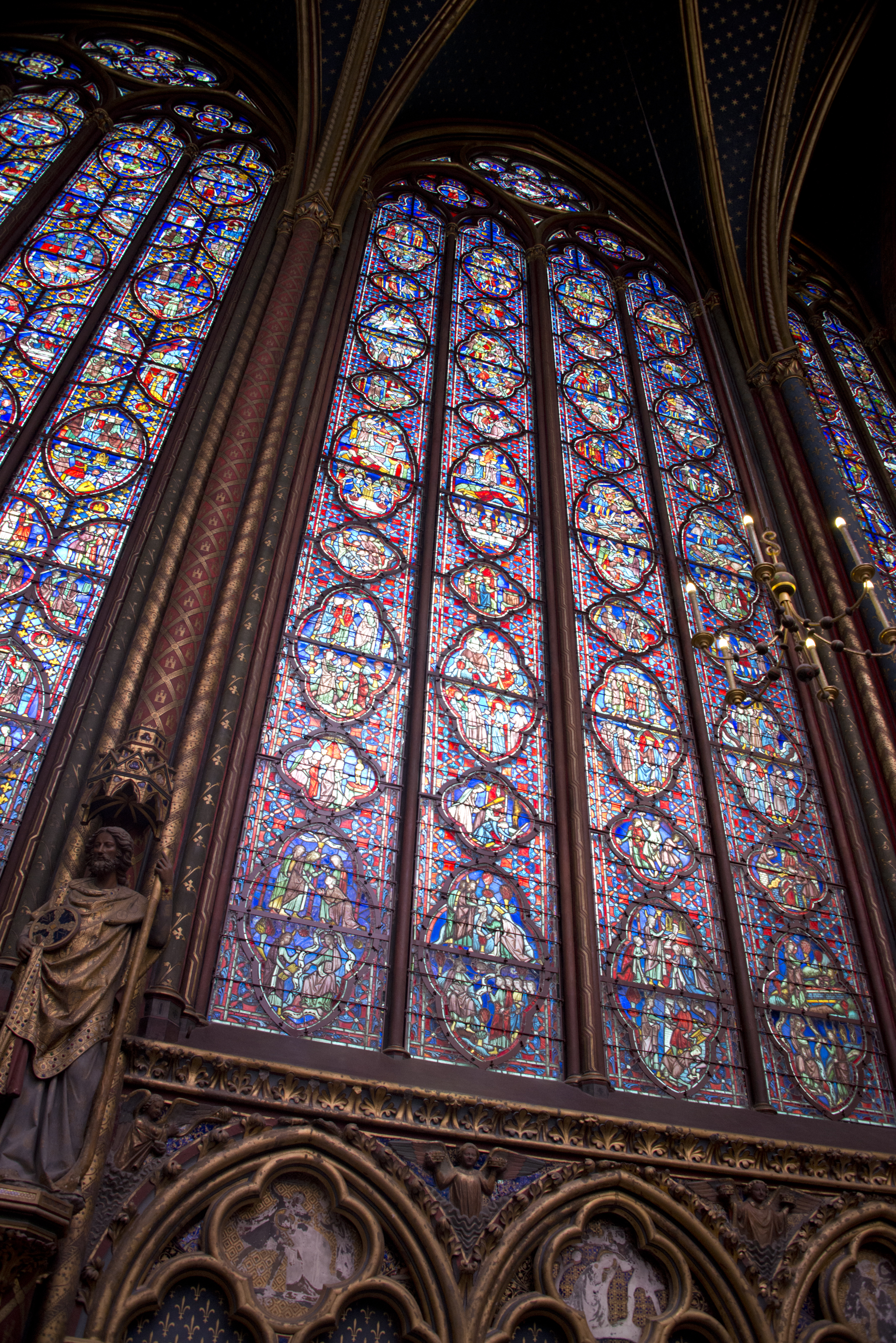 Even the floor is ornate: 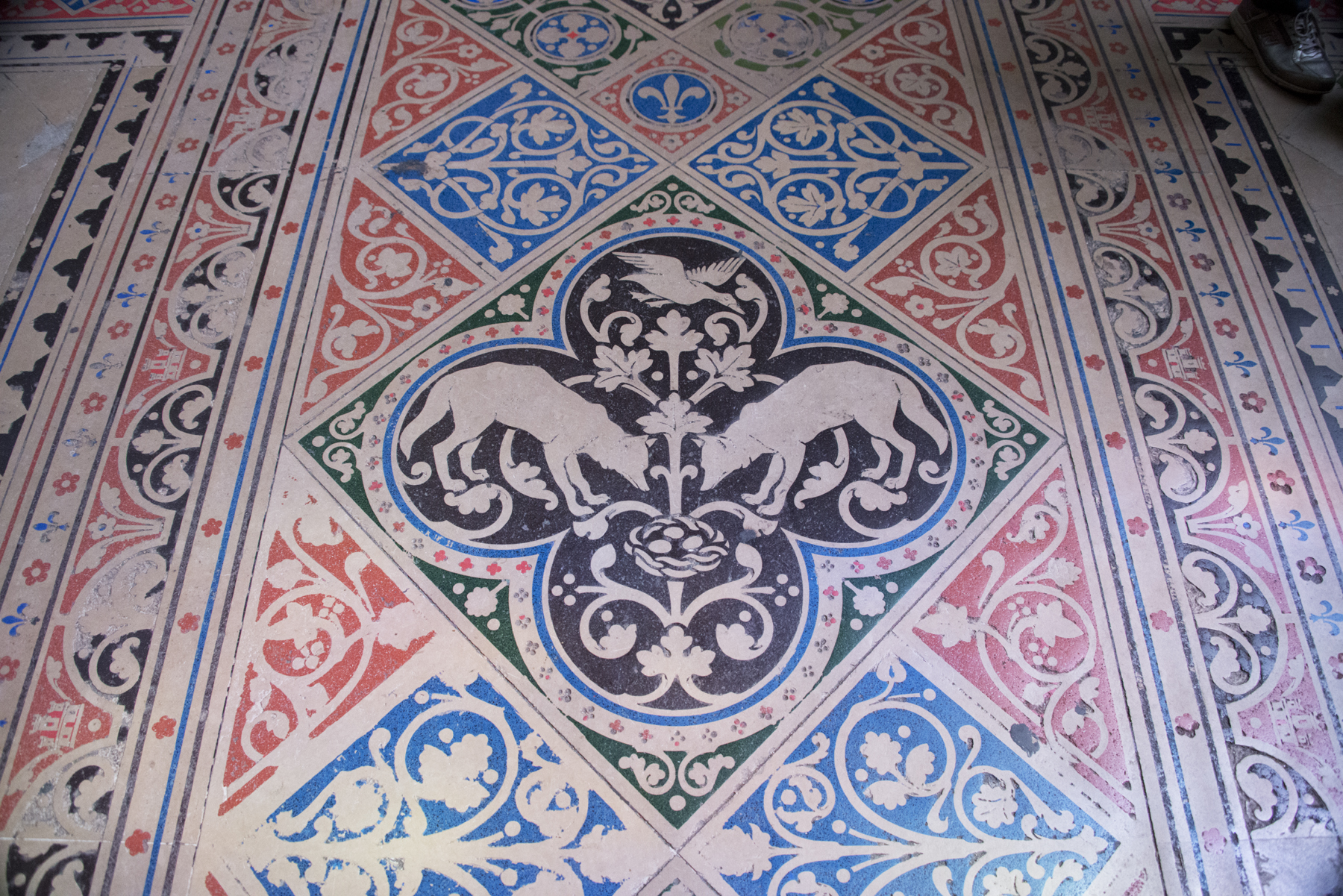 The detail in the 1,113 individual Bible scenes depicted on the 15 panels is amazing. They tell religious stories from Genesis to the Resurrection. Here, I’ll show you (my zoom lens says, “You’re welcome.”): 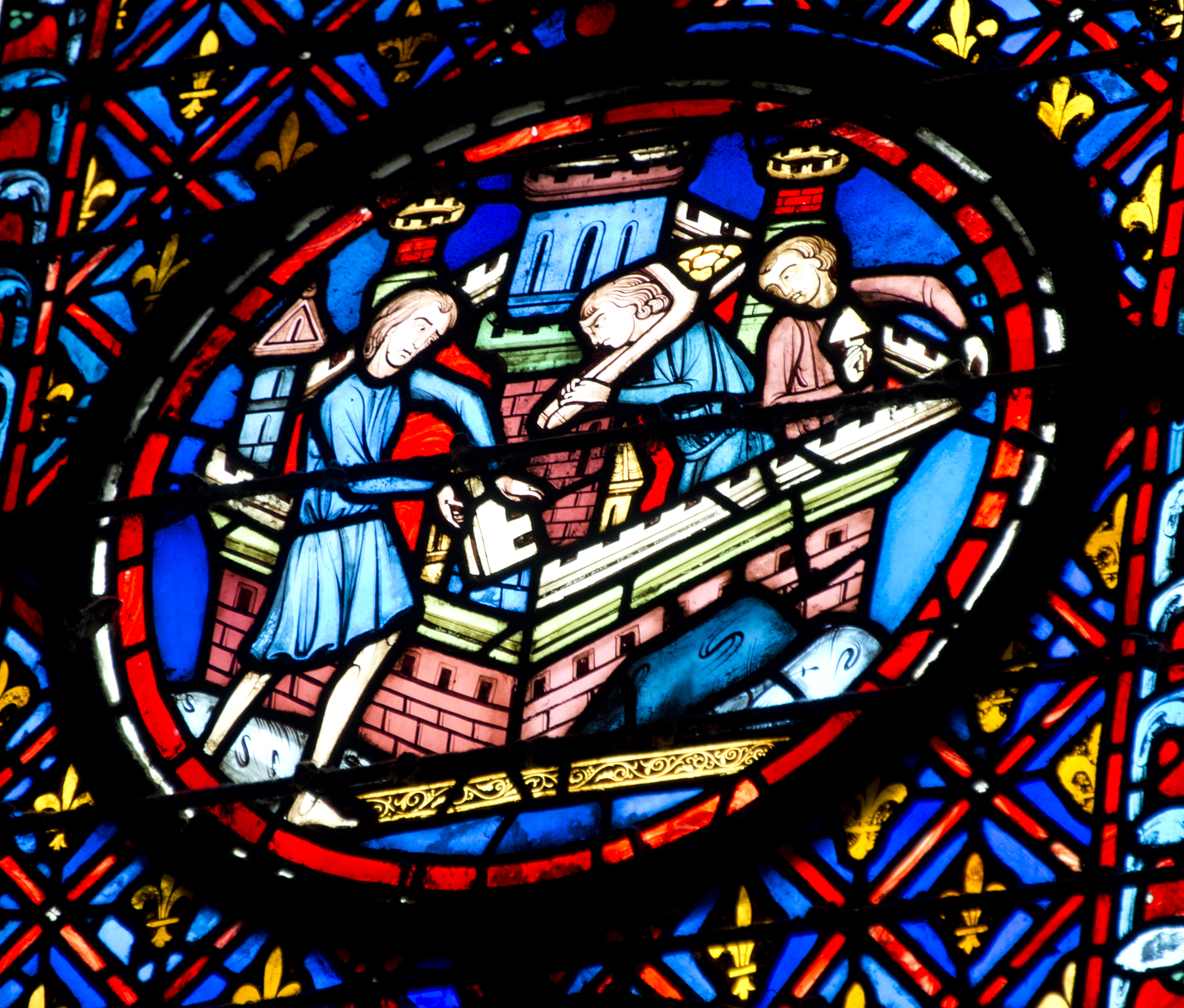 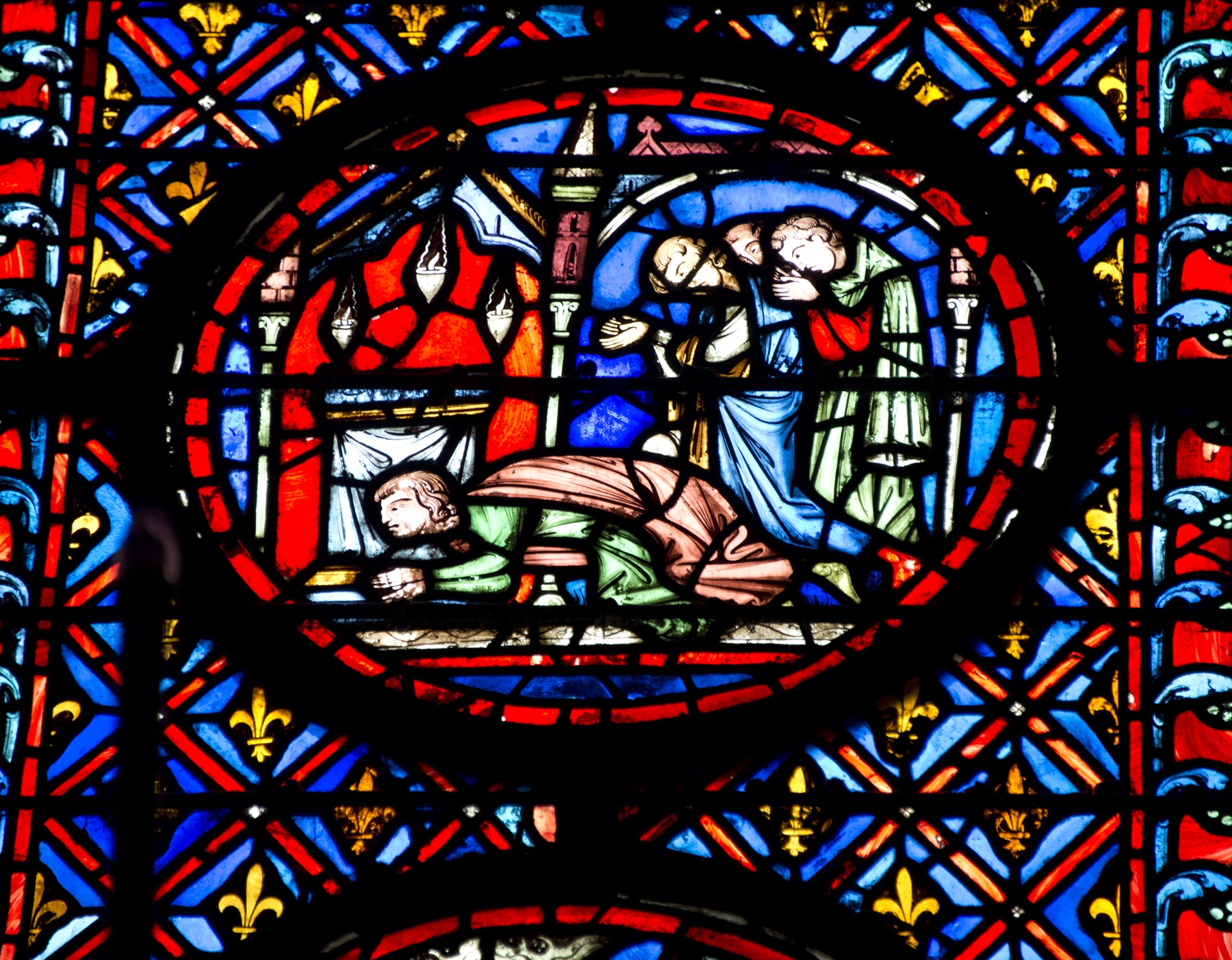 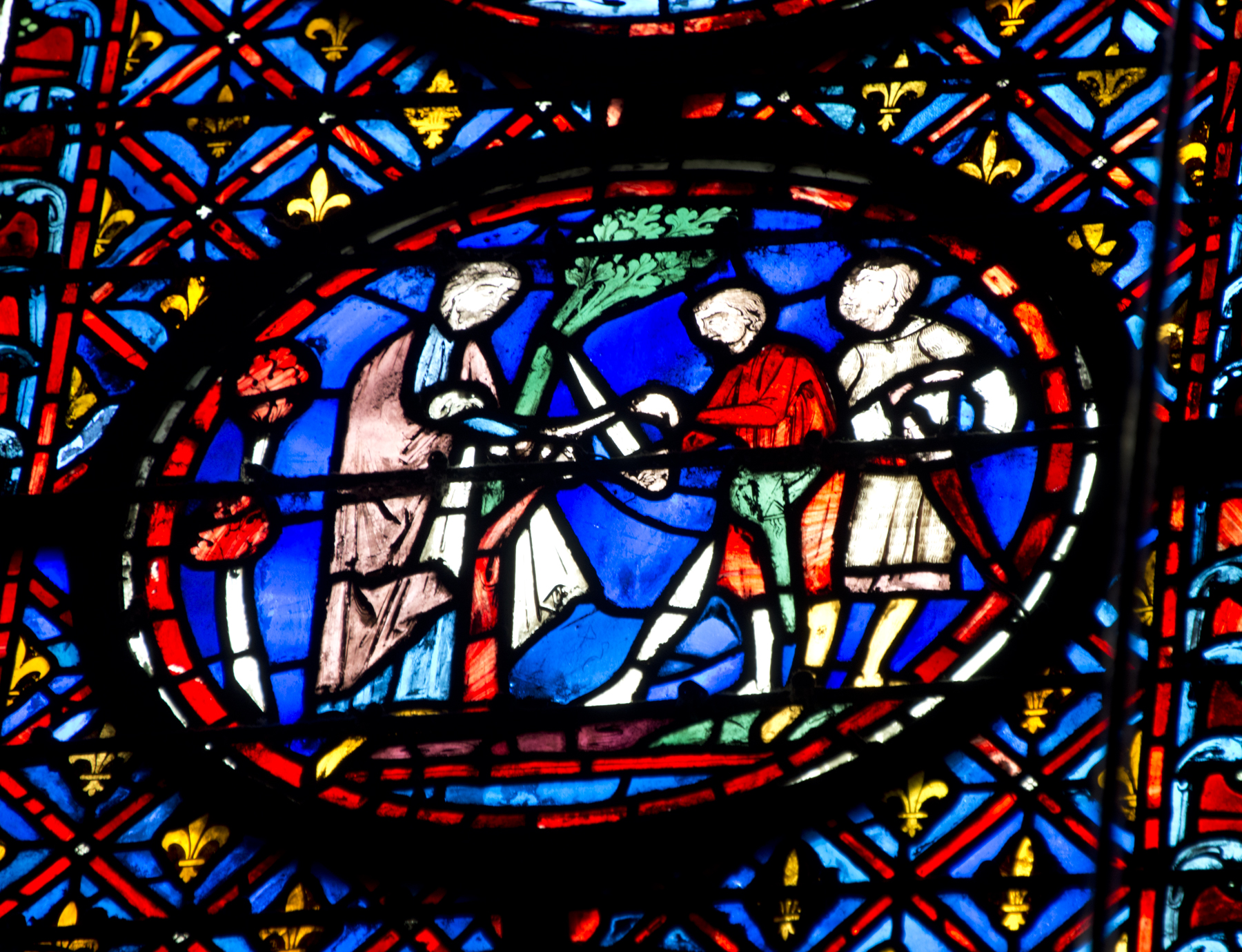 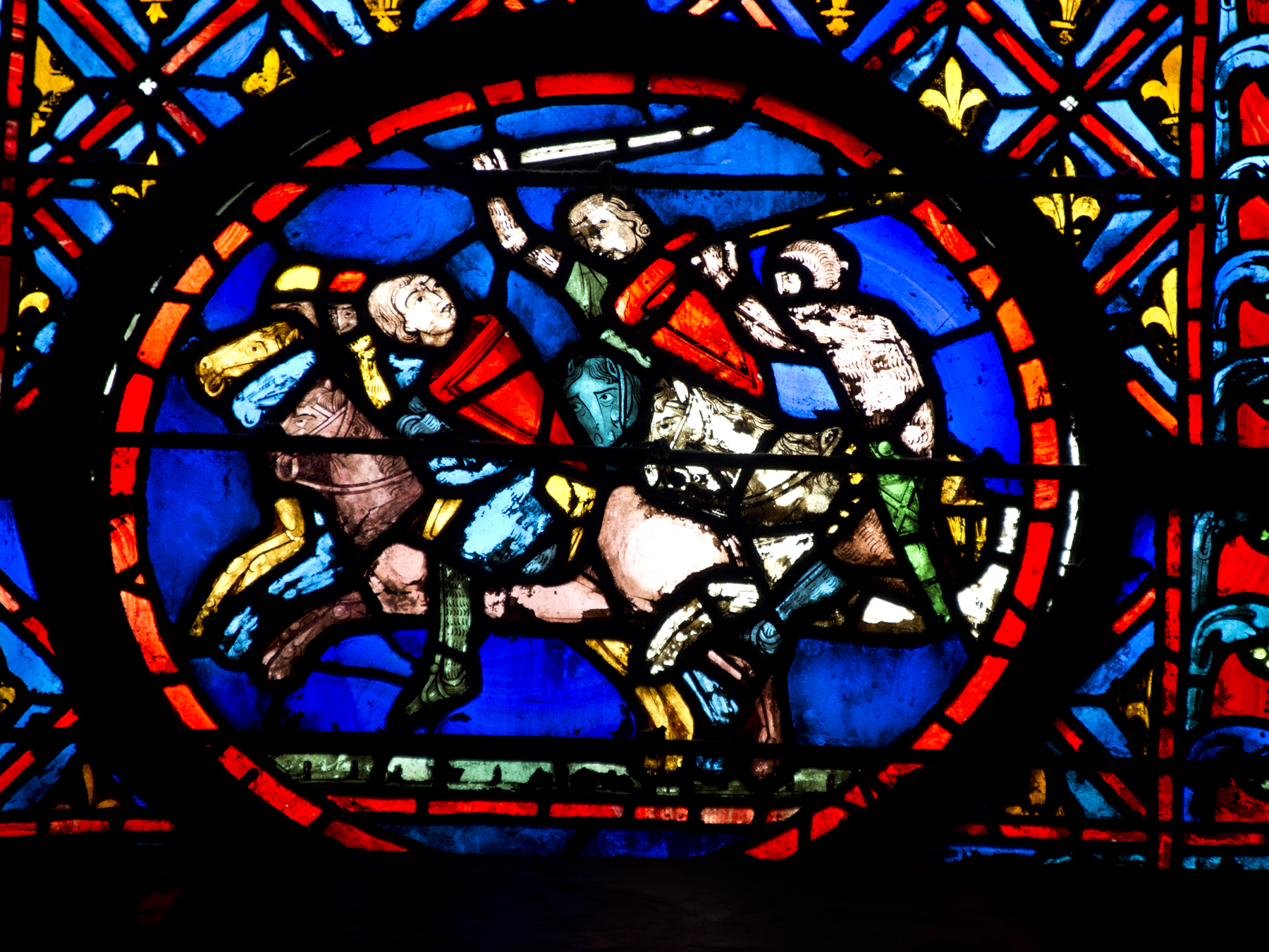 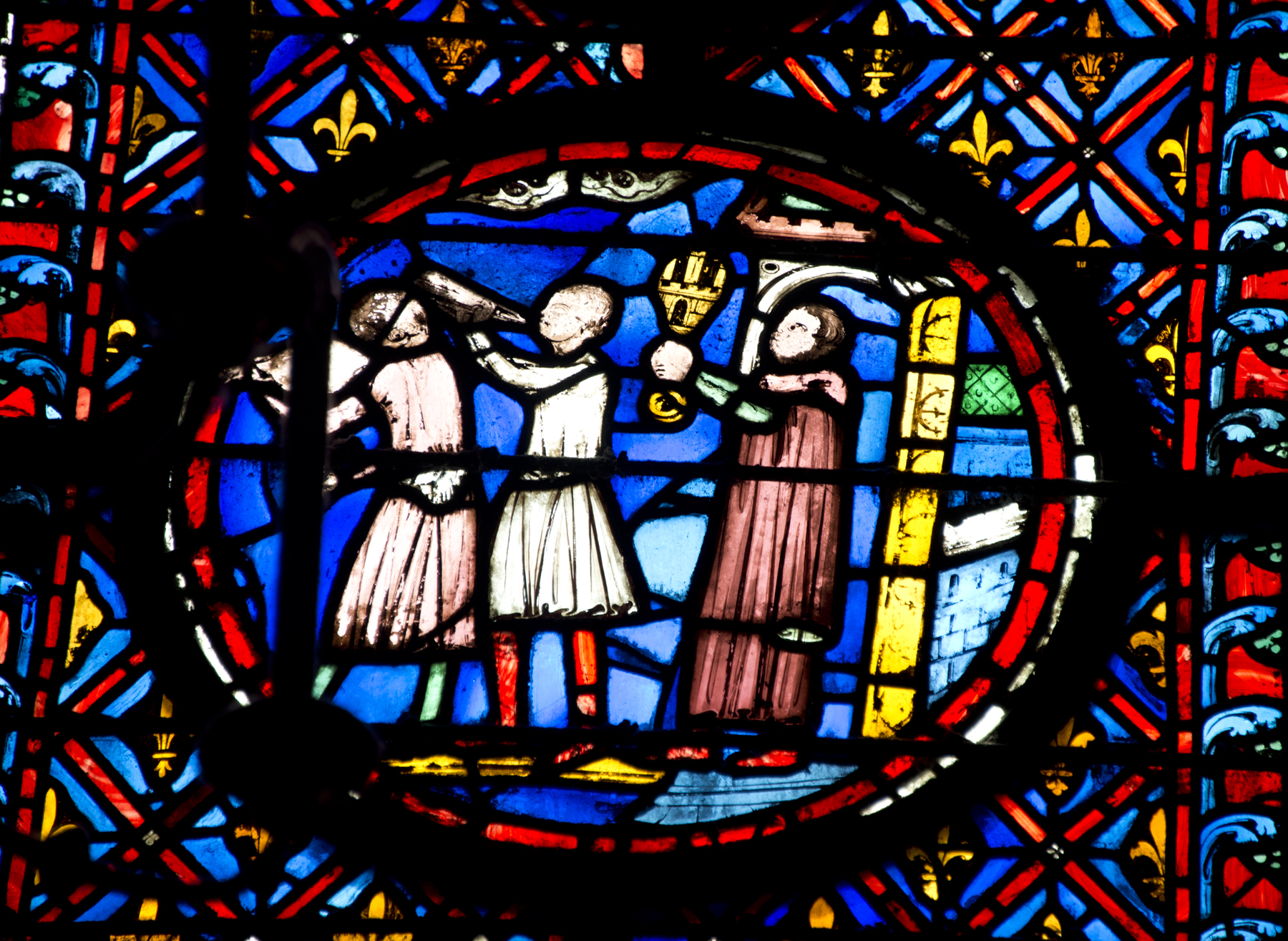 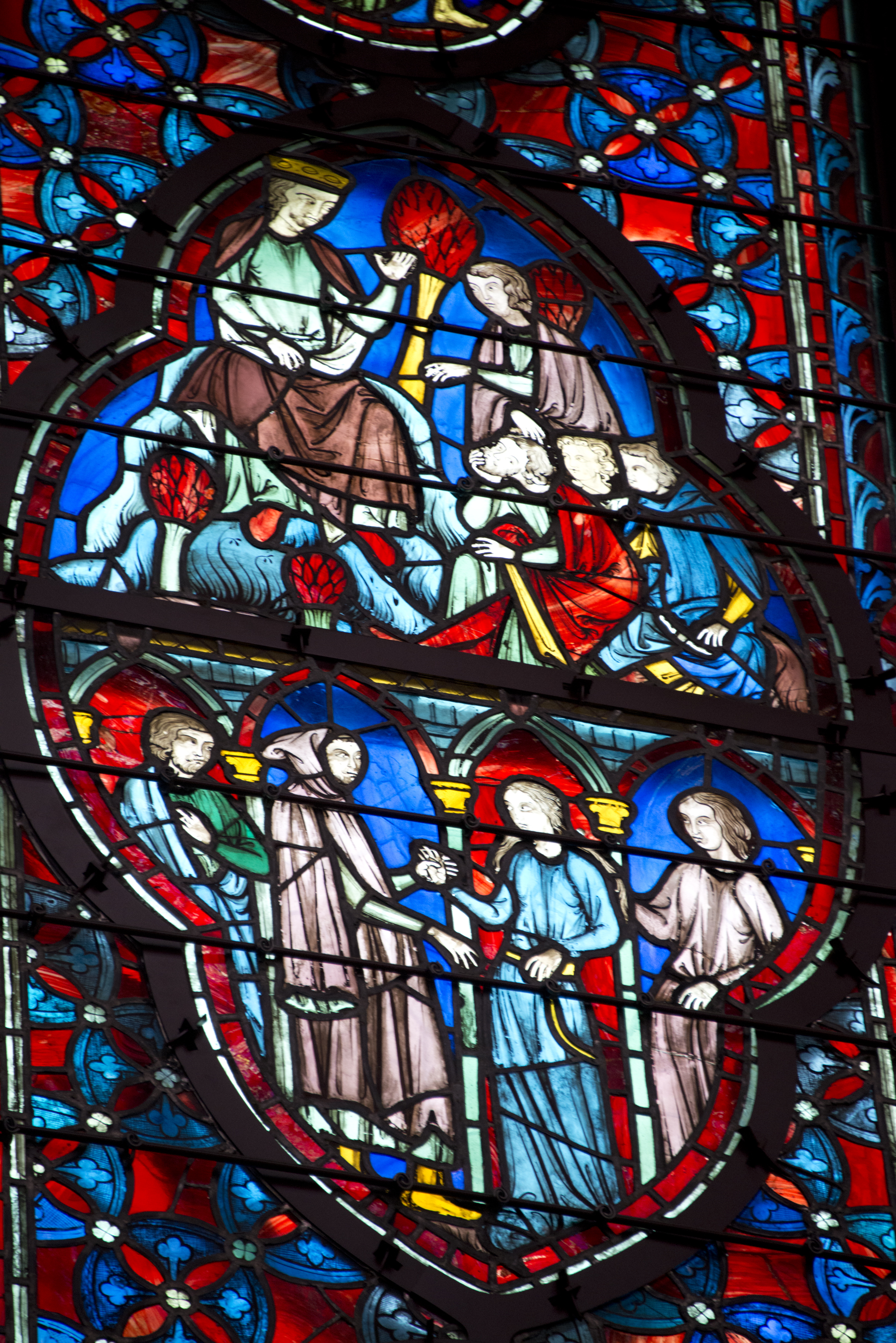 Of course, some of the panels are restorations, but about two-thirds are original, something that’s really hard to get my head around. Here in Germany most things had to be rebuilt after WWII. Paris did not suffer that fate, fortunately.

The crowning glory of the chapel is the western rose window. It depicts St. John’s prophecy of the Apocalypse: 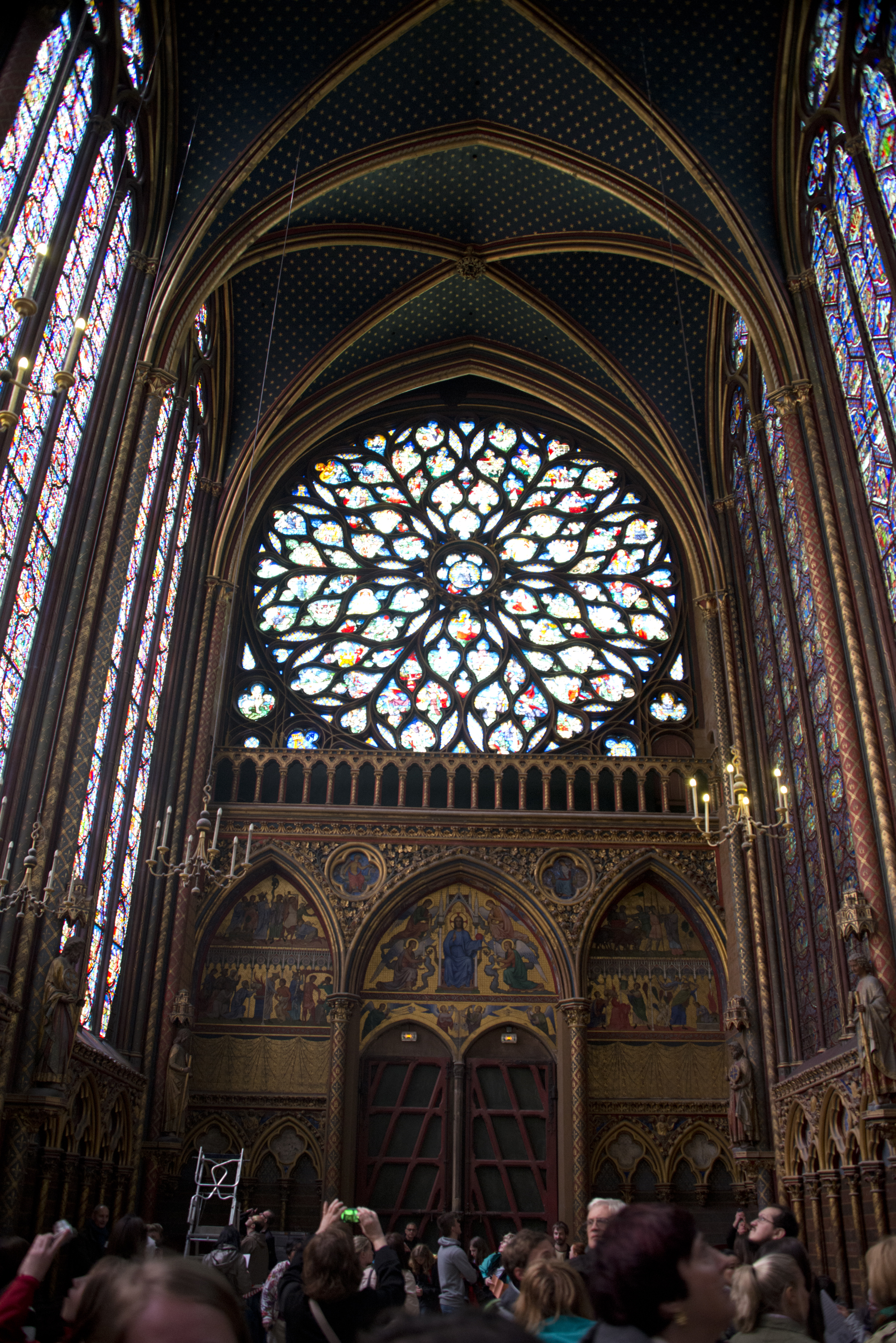 That ladder on the bottom left of the photo above was part of an ongoing restoration project. Gloved technicians were cleaning and restoring the nearby wall. 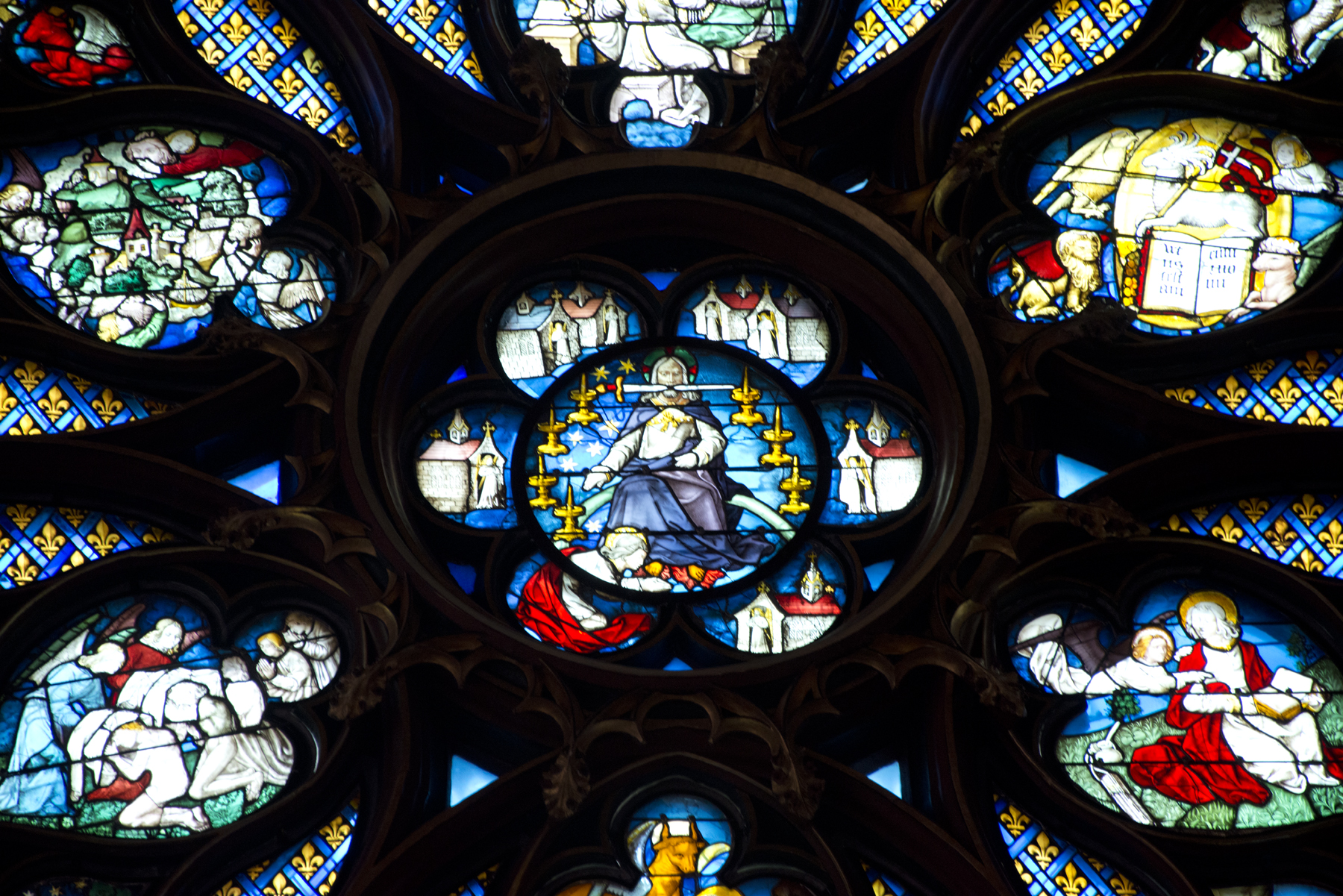 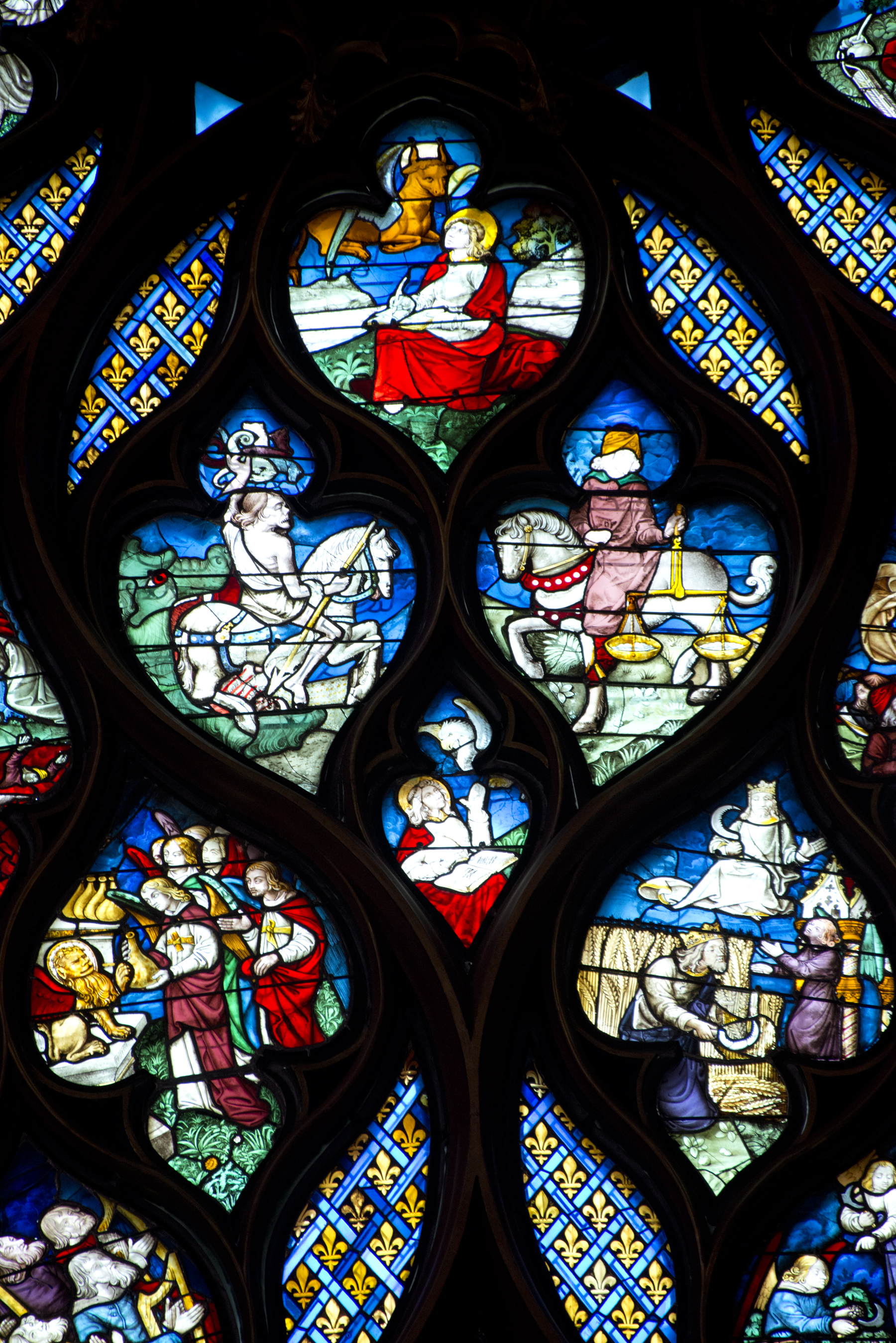 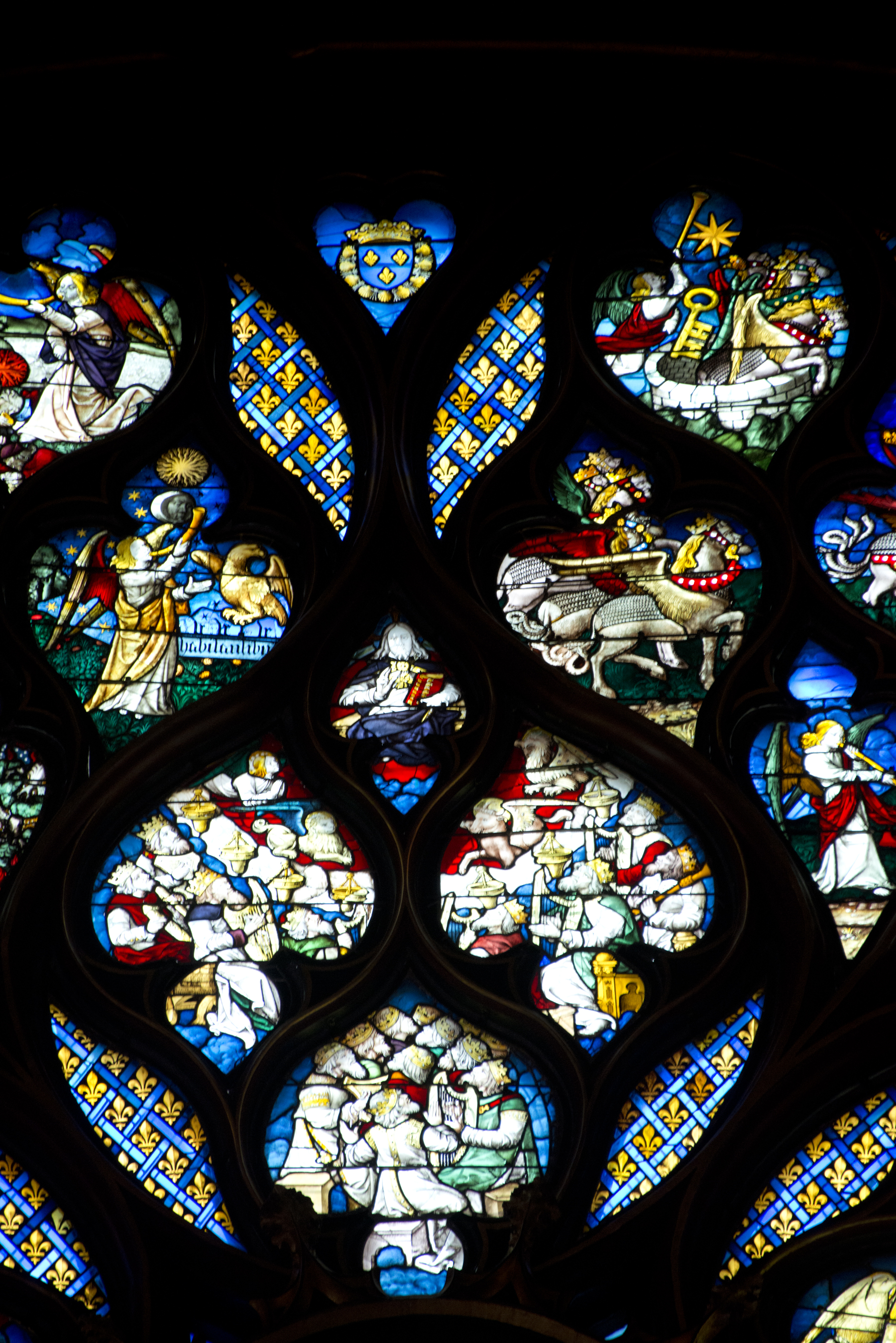 After our visit to the medieval chapel, it was time for lunch. Happily, I can report that Paris has no end of great eateries and we just had to cross the street to find a wonderful brasserie called Les Deux Palais, whose interior reminded me of an old-fashioned carousel and whose service and food I can highly recommend.

Here’s a parting shot of us two women in our souvenir berets atop the Eiffel Tower. 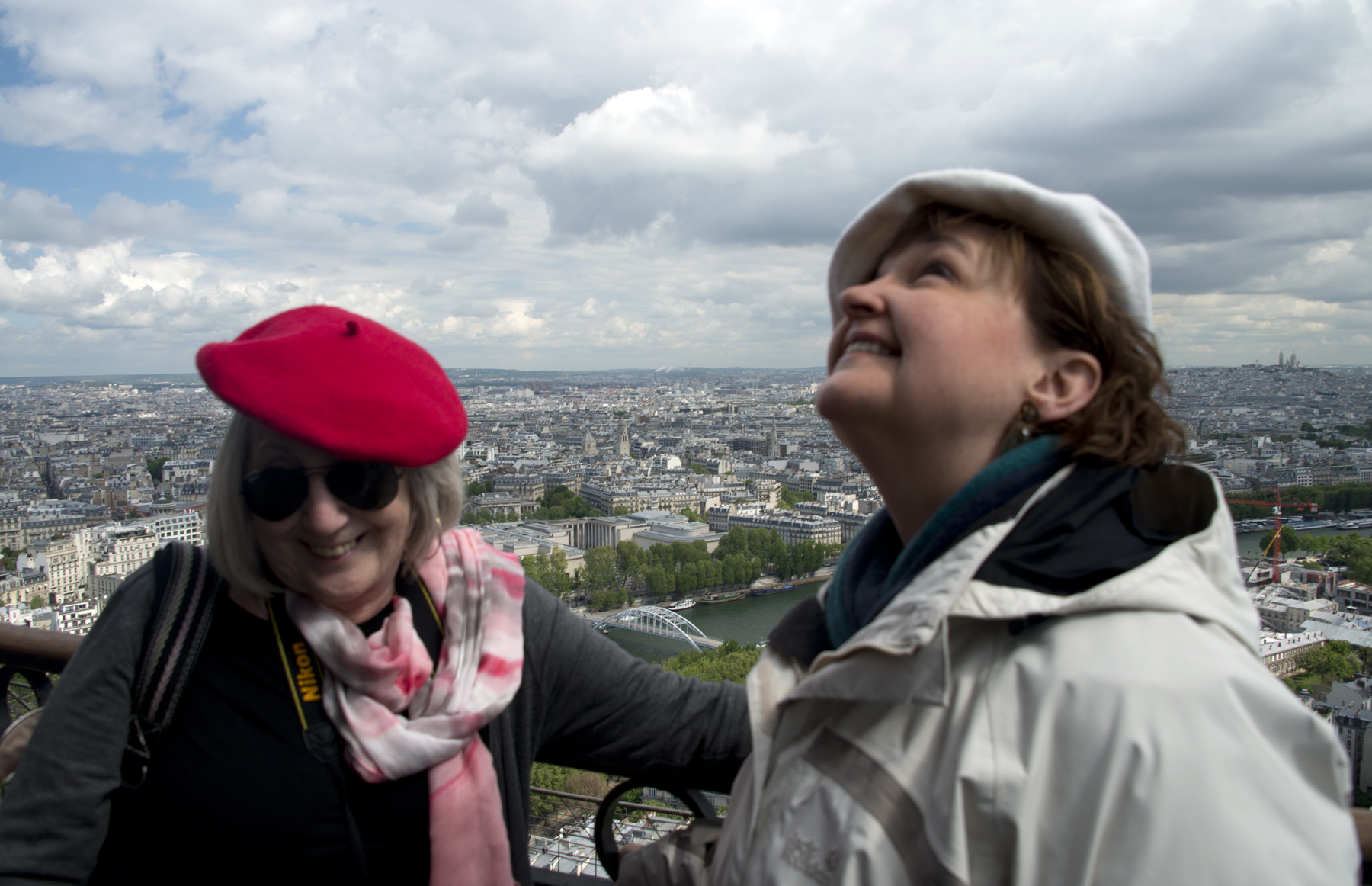 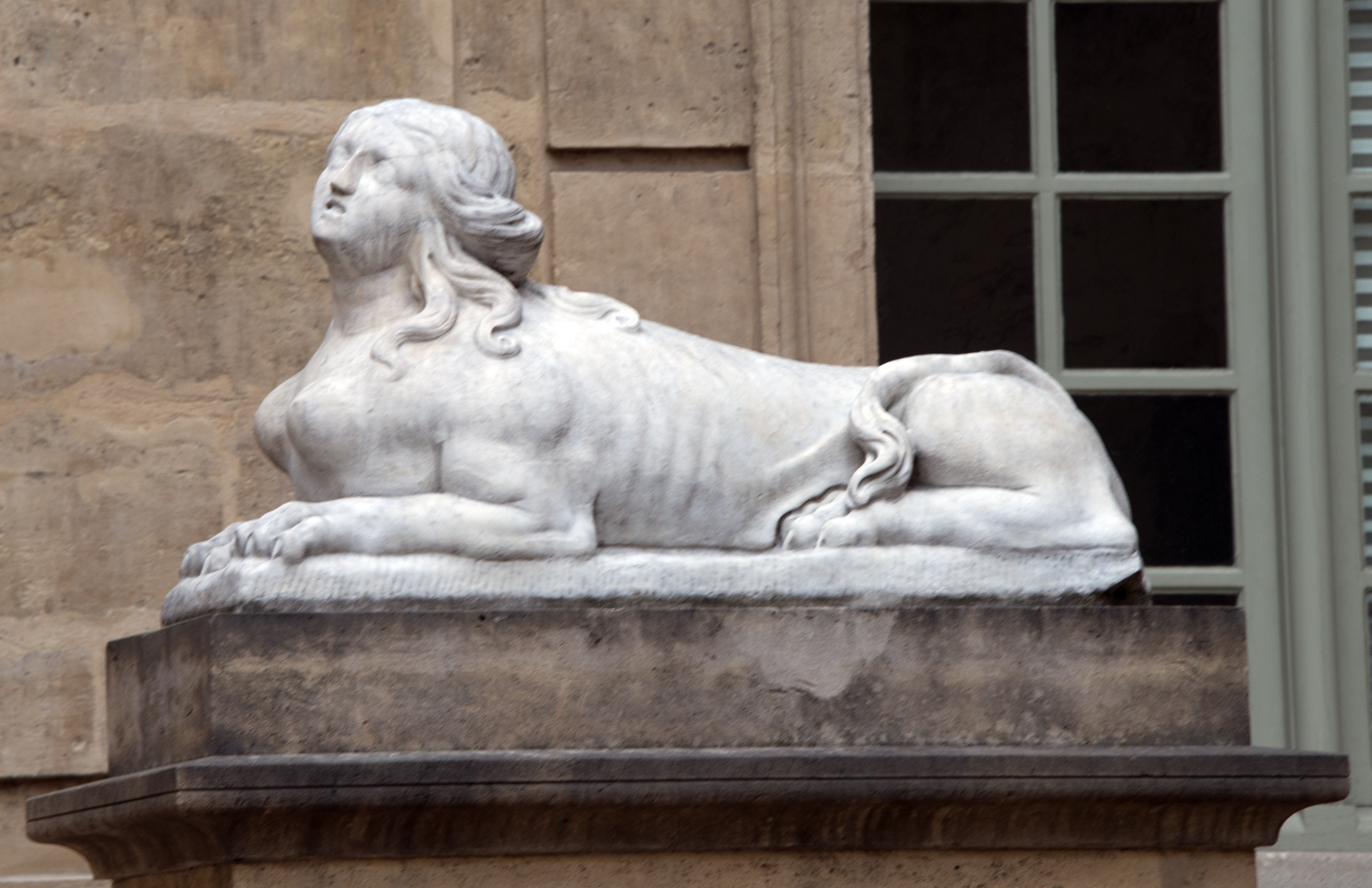 1 thought on “The Stained Glass of La Sainte-Chapelle, Paris, France”