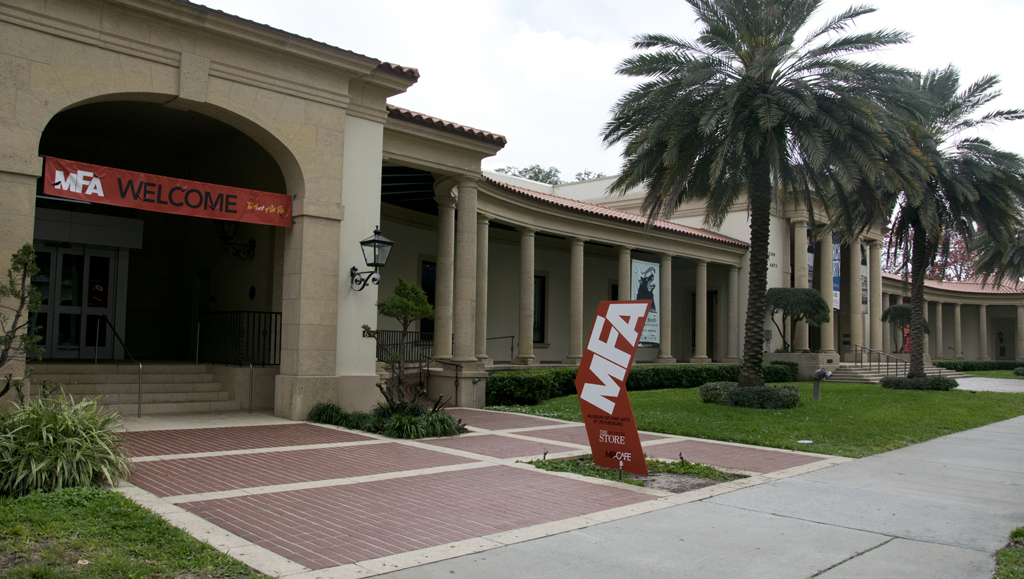 The Museum of Fine Arts, St. Petersburg, Florida always impresses me with the quality of their temporary exhibits. Years ago I saw a stunning presentation of glass artist Dale Chihuly long before he moved to his permanent digs nearby. The glasswork was installed all over the museum and grounds. One room that stands out in my memory had a glass ceiling on which sea- and reef-like glass forms had been arranged. Guests were encouraged to lie on their backs and look up at it; it was wonderful!

MFA is right on the waterfront in downtown St. Pete. I shot the following photo with the museum at my back: 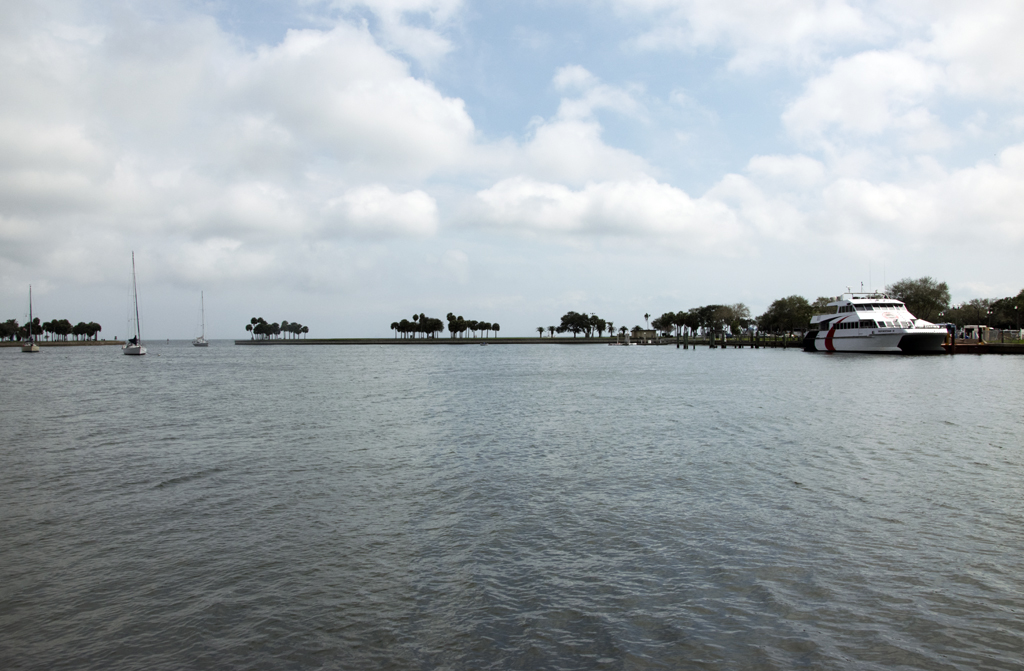 The museum itself looks very classical:

It was expanded to about twice its original size in 2006. So, entering through the “new” main door, visitors are greeted by a modern atrium: 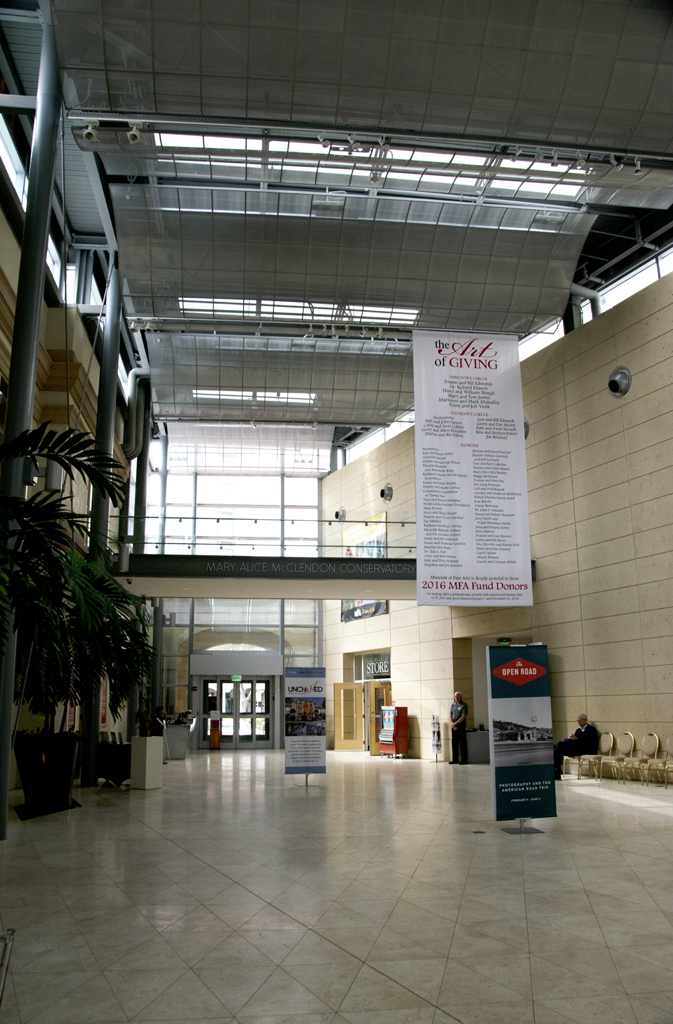 I’m often invited to the museum by my friend Carolyn who lives in St. Petersburg. She’s my “museum radar” and we hook up for art and then coffee at Mazarros. This time she’d found an announcement for a photography exhibit called “The Open Road – Photography and the American Road Trip”. Road trip? I’m in!

I arrived early, along with my friend Cheryl, and we had time to peruse the permanent collection before Carolyn arrived. LOVE me some Dutch masters! 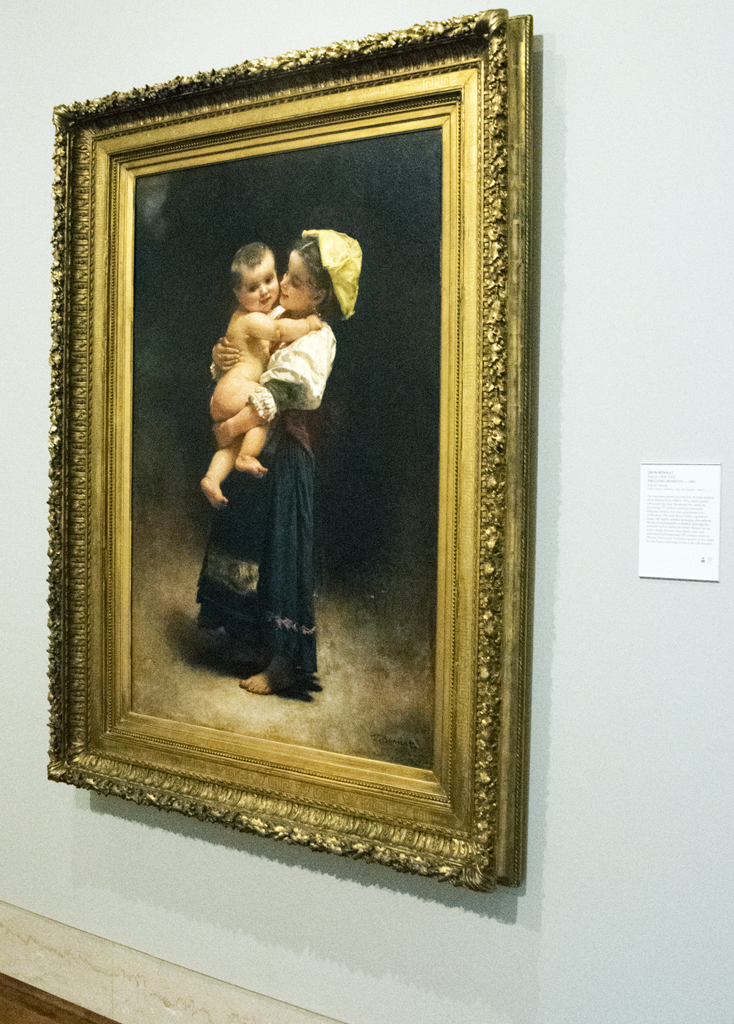 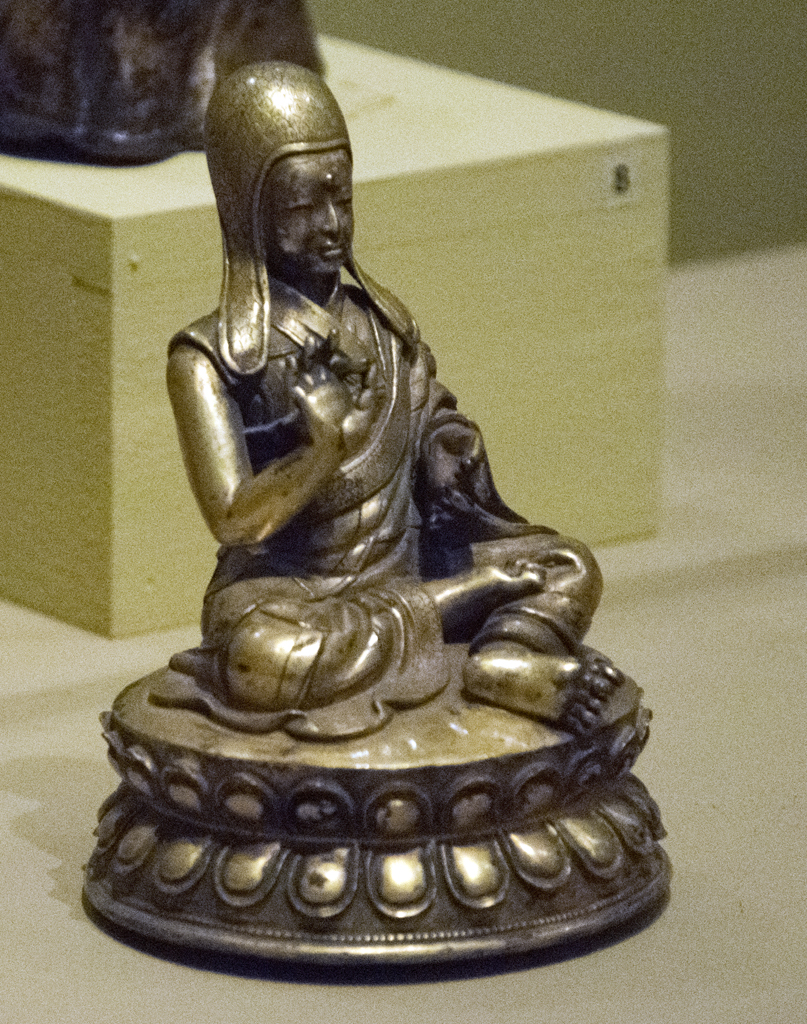 Once Carolyn arrived, we went to see The Open Road exhibit: 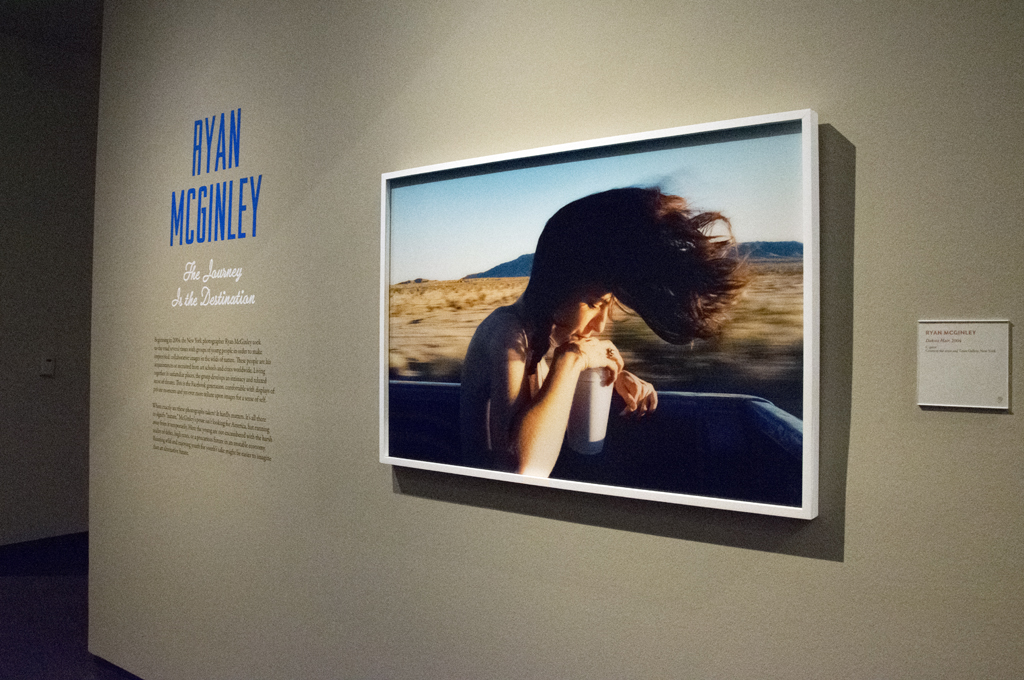 There were a couple of tables in the center of the exhibit rooms with associated objects such as these games and toys related to American road trips.

Here, my “model” Cheryl demonstrates how NOT to use the reading table, which held copies of books by all the photographers presented in the exhibit: 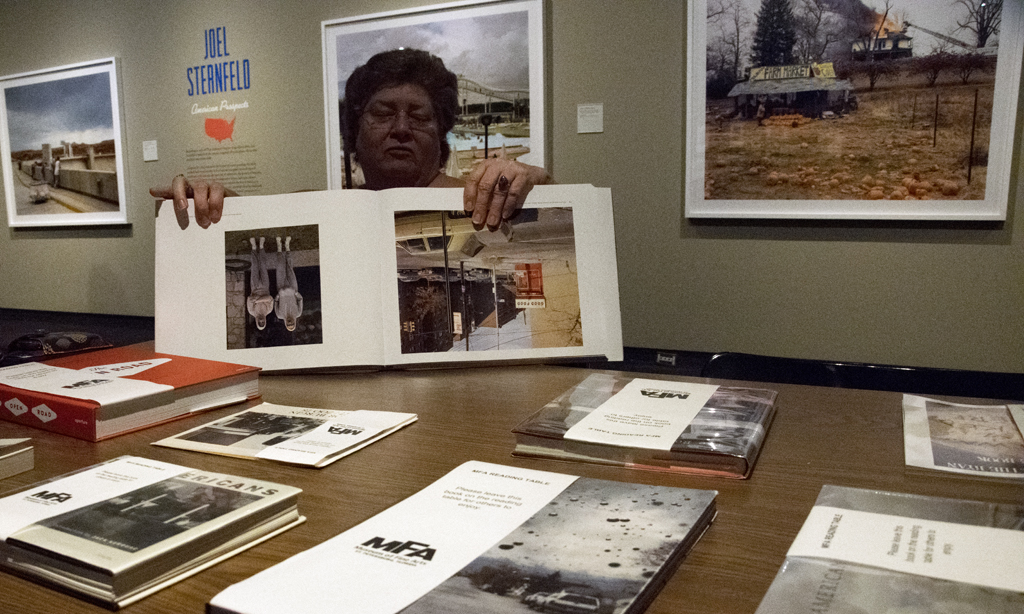 As much as I am a HUGE fan of American (and other countries’) road trips, I must say that the exhibit was a little disappointing. None of the images really wowed me. However, they were rather interesting and there were some non-American photographers’ works there. It was an interesting perspective that those artists had about the American love affair with cars and trips vs. what they knew. That was eye-opening. Also, their images tended to be more generic, with landscapes and wide angles that included lots of details. The American photographers tended to focus on (no pun intended) details and narrower angles. I’m guessing that, since they grew up with the American backdrop, it’s not as meaningful as some of the details, or at least not as remarkable. What do you think?

At the end we entered the gift shop, which had a cute entryway: 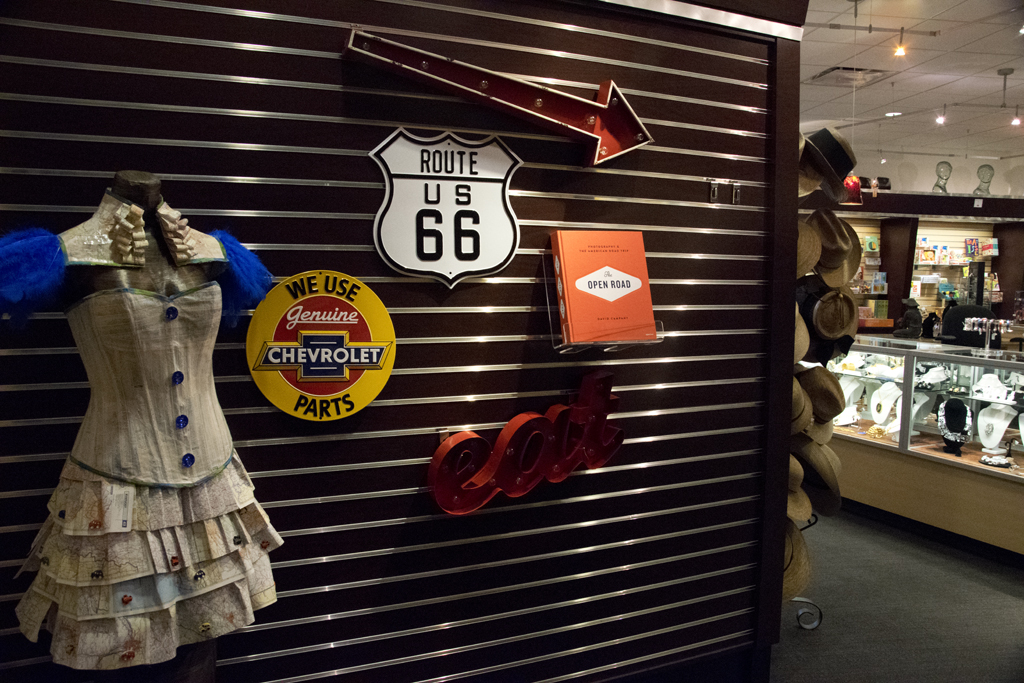 The ‘dress’ in the above photo was made out of old road maps! All in all, it was a fine afternoon and not a waste of time. I’m looking forward to the next time I can get there to see some art with my friends.

The museum is located at 255 Beach Drive NE in St. Pete, 33701. They are open Monday through Saturday from 10am to 5pm. Thursdays they are open til 8pm, and Sundays from noon to 5pm.

There is a cafe at the water end of the atrium, which always seems very busy, though I’ve never dined there. It’s open Tuesday through Sunday from 11am to 3pm. Maybe next time I’ll report on their food. Across the street and in the neighborhood, you can find loads of St. Pete’s restaurants. It’s hard to find a bad meal there.

For now, I’ll just recommend you keep an eye on the museum’s website and get yourself down there when you find an exhibit you like. It’s a great daytrip if you add in a visit to the Dali Museum just down the road. 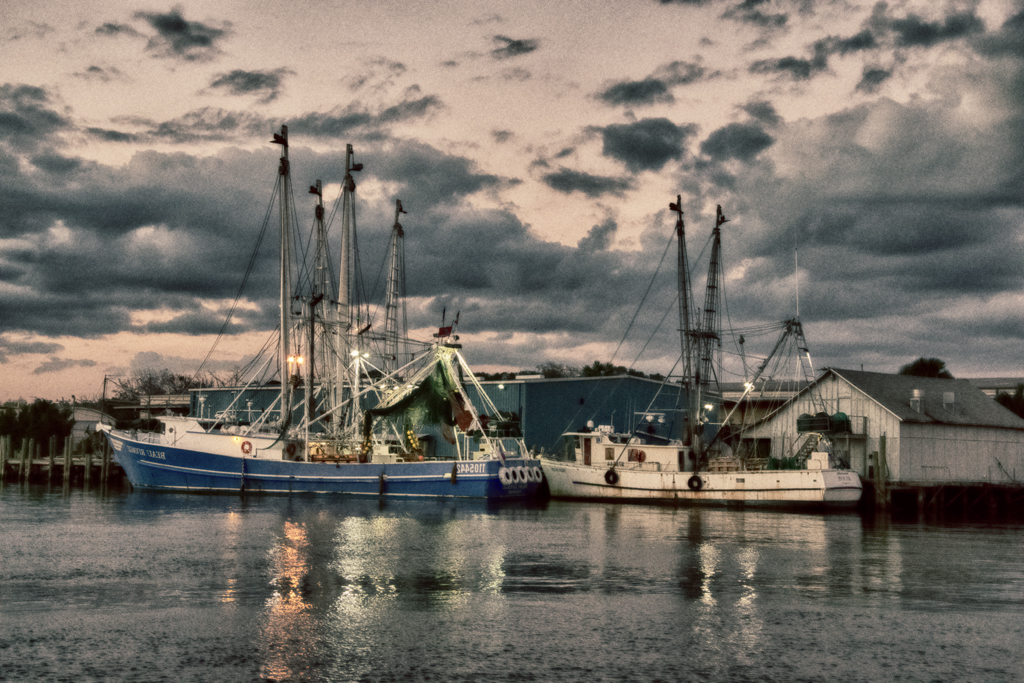