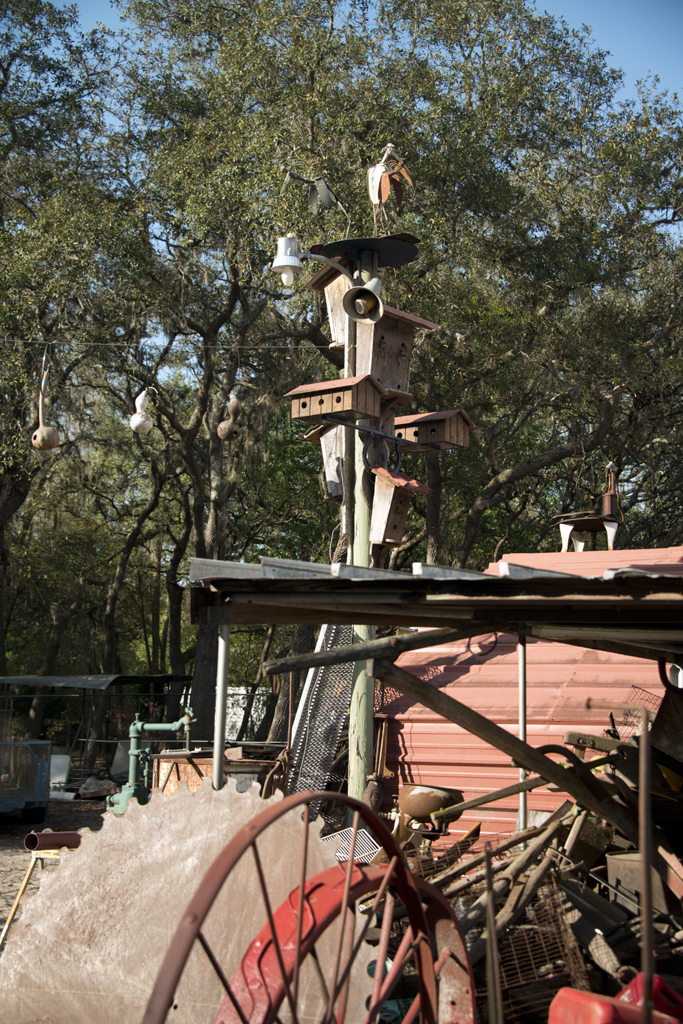 Recently, my phellow photographer phriend Paula and I embarked on an afternoon photo excursion. Our original plan was to visit a more-or-less well-known roadside attraction just off Interstate 75 and Fletcher Avenue in Tampa. I had checked the website of this “reuse artist” and was looking forward to getting some interesting detail photos and maybe talking to this interesting man.

We arrived at the place – it was deserted – and set about taking some closeups of some of the upcycled “sculptures”. In a little while, someone – he looked like the artist on the website only maybe older – appeared behind us and told us that if we wanted to take pictures we had to stand behind the power lines because that was no longer his property and he couldn’t do anything about it if we were taking photos from there. Then he turned and stalked off.

Well. We immediately got back in the car and left. Weird. And rude.

So I just started driving, at a loss as to what to do now. We really wanted to do some photos but had no idea where to look. We ended up on Highway 301 headed north. About three and a half miles before the entrance to Hillsborough River State Park, I spotted a lot enclosed in a chain-link fence, seemingly bursting with old, rusty farm equipment.

A quick U-turn landed us in the driveway where we saw a padlock on the gate. Paula suggested that this time we should maybe find someone and ask if it was ok to shoot pictures. We headed up a sandy road next to the fence. A man in a neighboring lot shouted to us that someone would be there in a minute, so we headed back to the car to wait.

Just then, a loud, old-man’s voice burst forth from somewhere among the rusty piles: “Are you the undercover FBI? If ya are, I ain’t gonna let you in!” The voice belonged to an old man with curly white hair who was shuffling toward the gate. Paula said we were not “undercover FBI” and asked if he minded if we took some pictures of all those old things lying around. “Oh, sure!” he said, “I’ll open the gate and you take as many pictures as you want, as long as you ain’t the undercover FBI!” I laughed and said we weren’t, so he unlocked the padlock, removed the chain and swung the gate open for us. 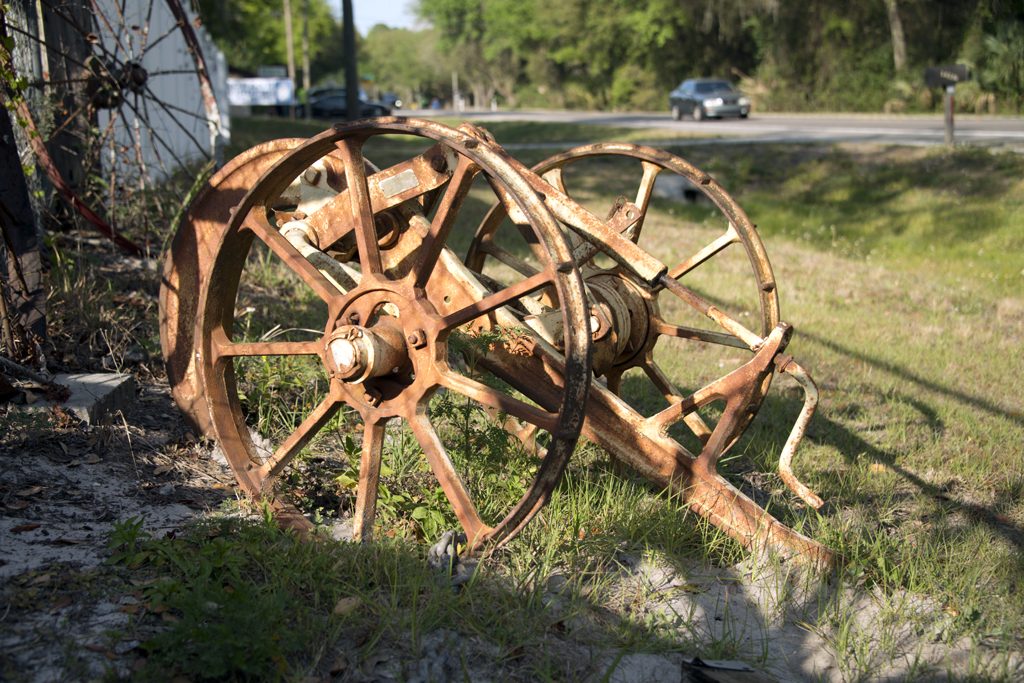 We had a blast in there! This guy had it all – antique leather doctor’s carriage, mint-condition John Deere farm wagon and all manner of things from days of old. 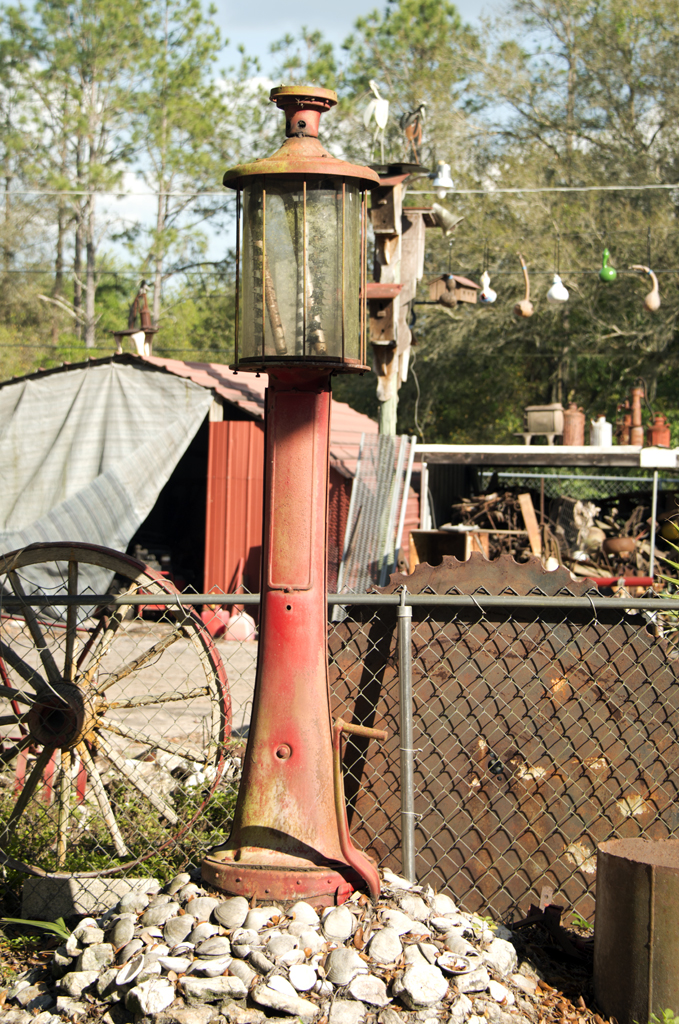 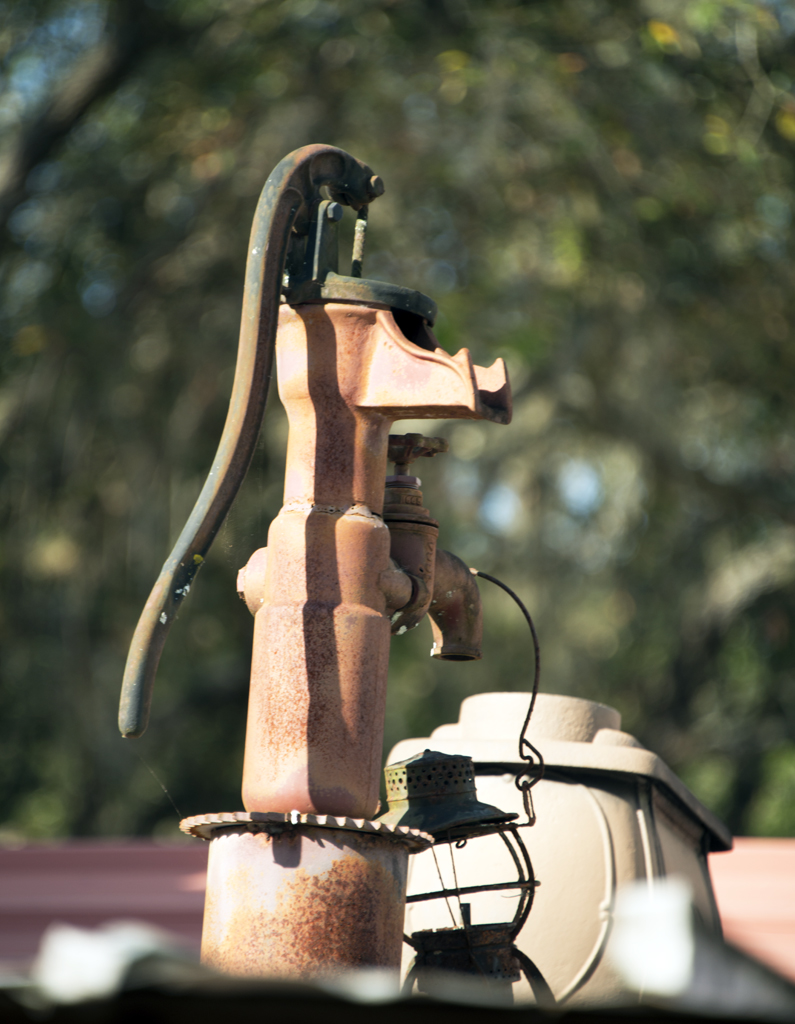 He told us this was an icebreaker wheel for a tractor: 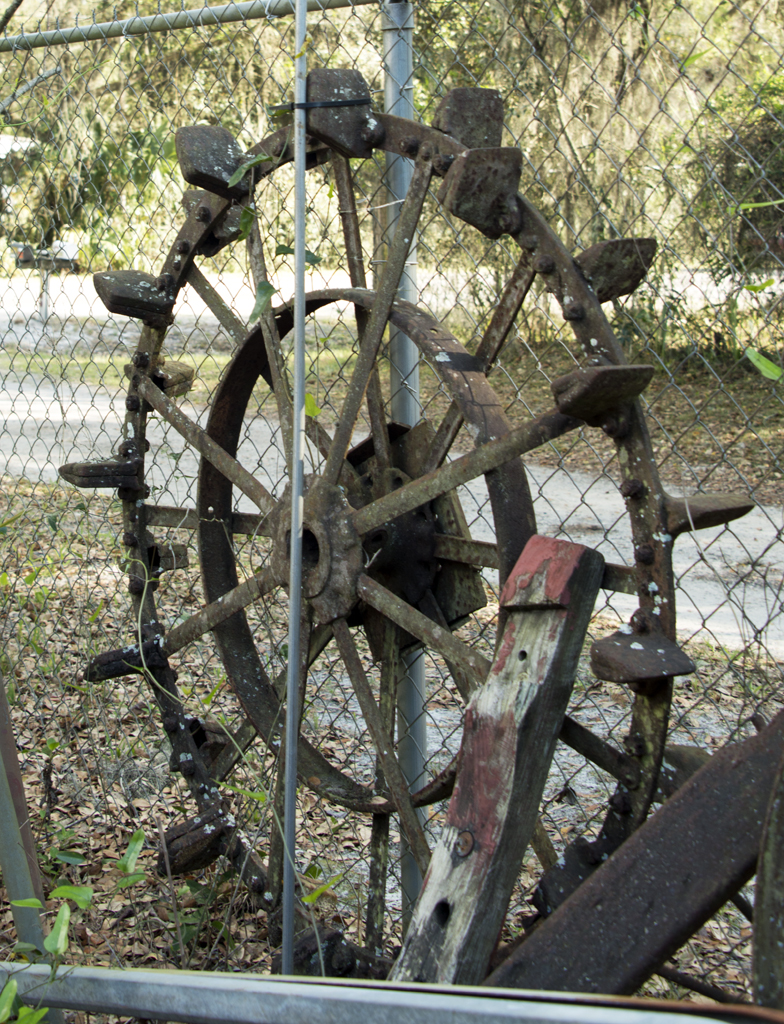 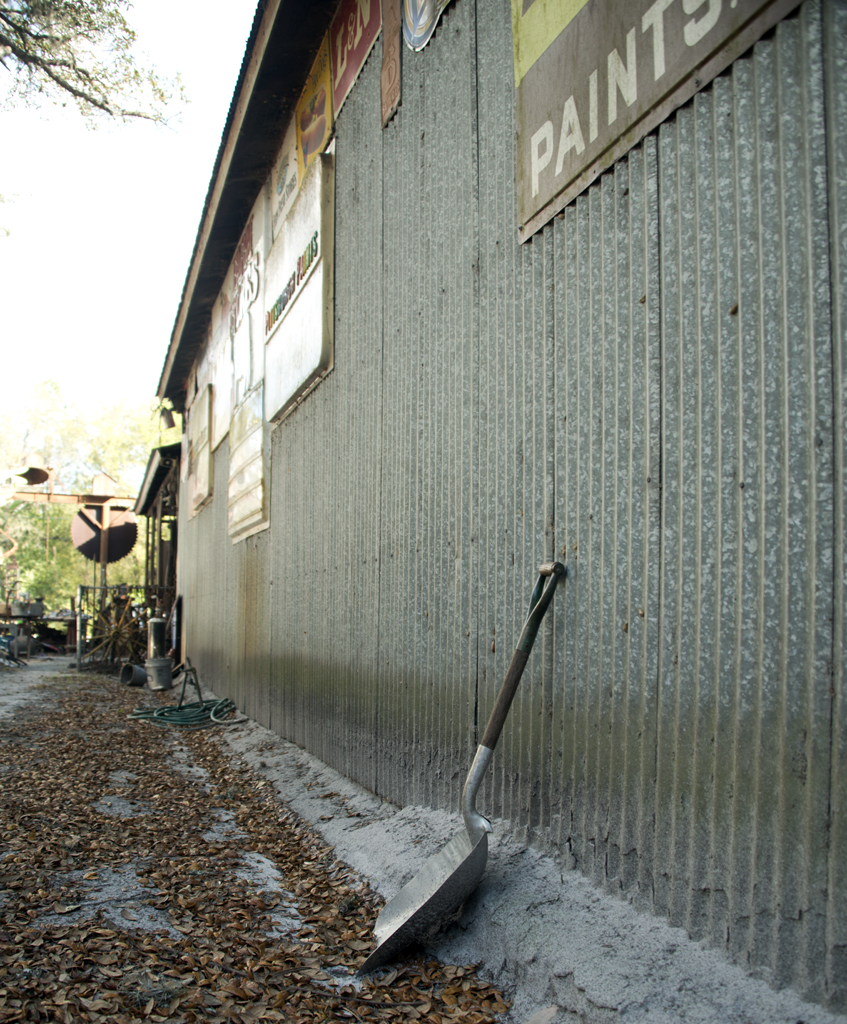 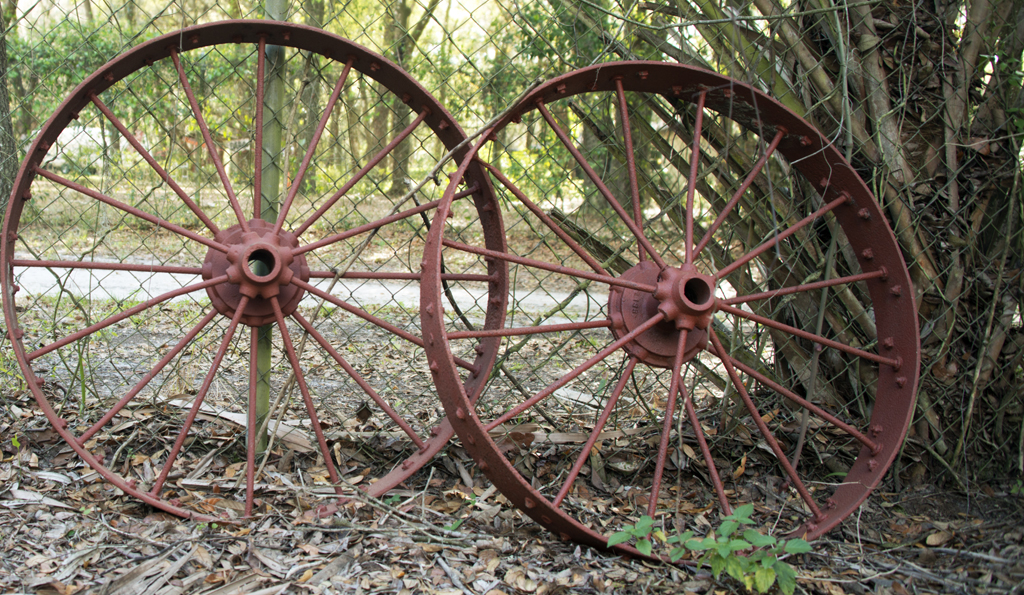 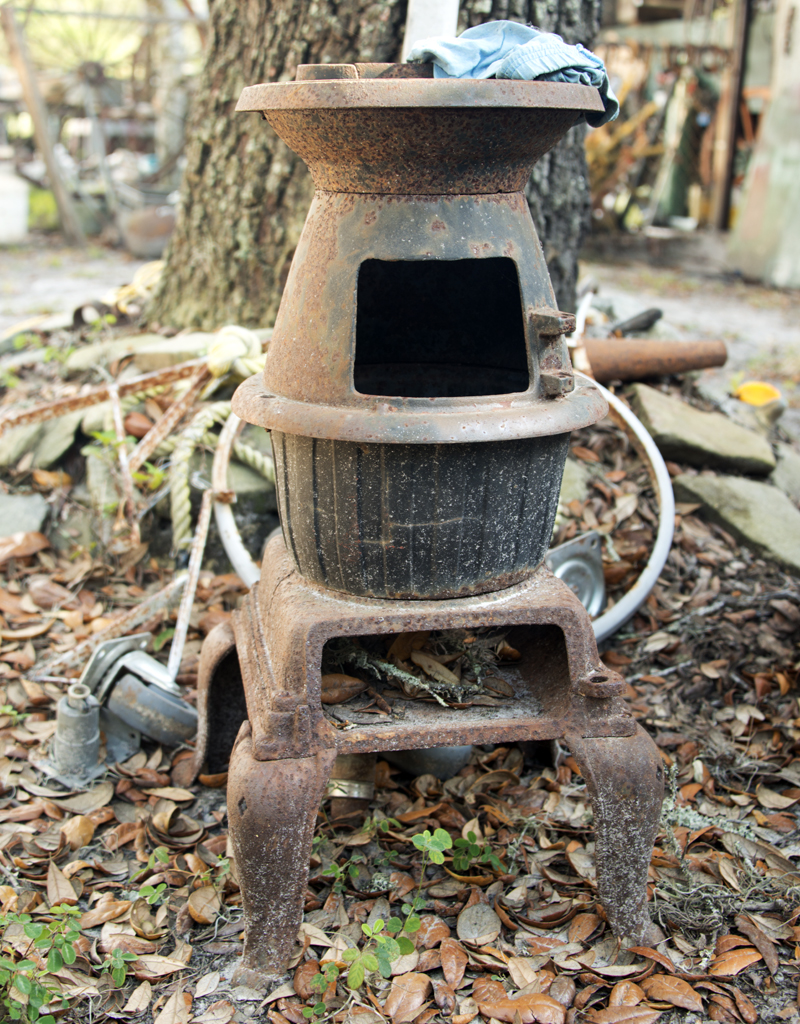 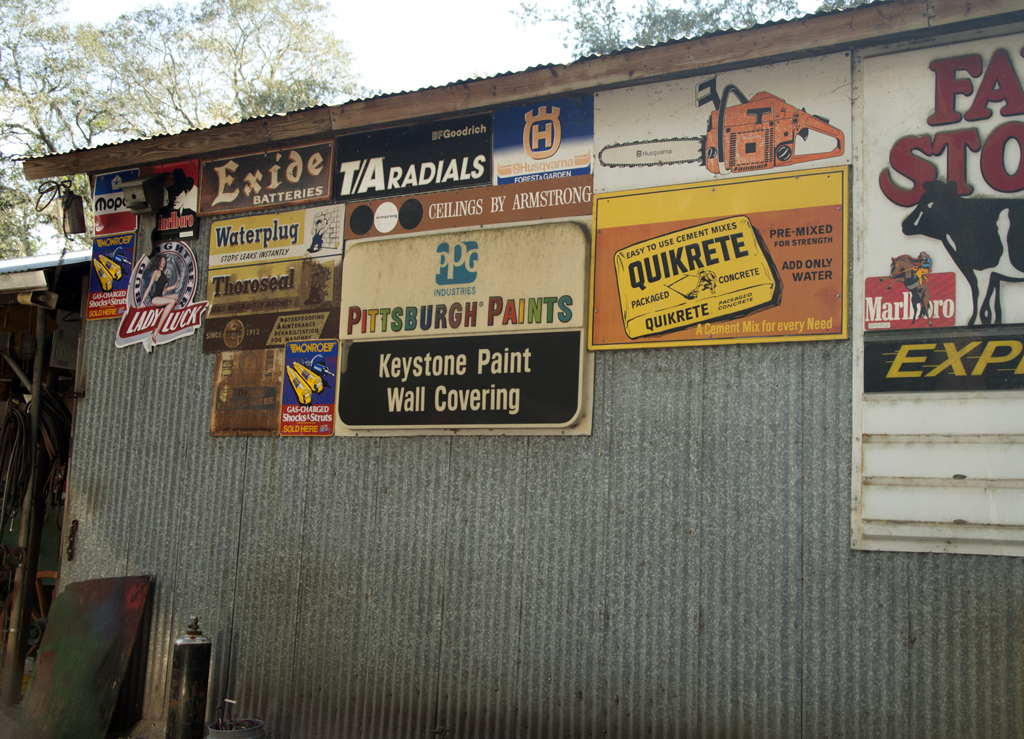 The whole time the guy escorted us around the property, letting us peer into dark sheds and cubby holes. And the whole time this guy TALKED! It was very difficult to figure out if he was pulling our leg about most things, but I think I believed him when he said he was 91 years old and had been collecting this stuff all his life. Apparently his kids think he should sell it, but he likes it. He also has a house in North Carolina, where Paula is moving in a few months. Oddly enough, his house is in the same small town she’s moving to!

The old guy was full of stories and never stopped moving. I managed this shot as Paula was trying to get him to cooperate with her for a portrait. You can see his hands were in motion! 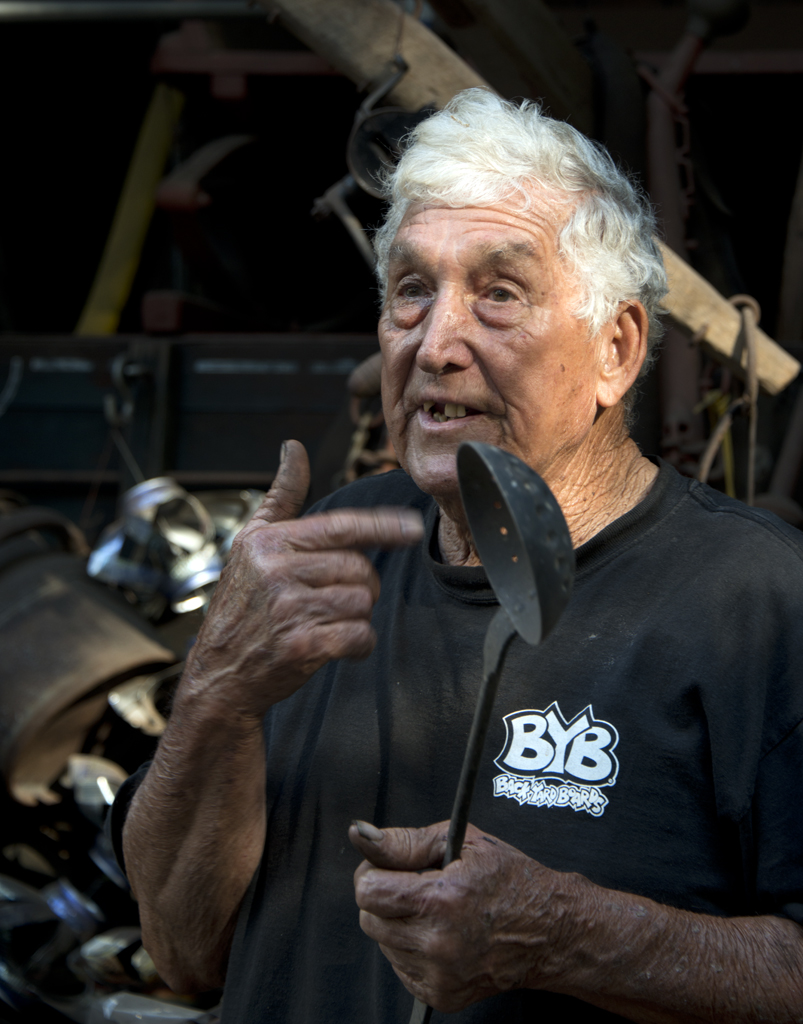 Oh, this guy had a story for every single item in the yard. And his house was located smack in the middle of this large lot, the porch and eaves also covered with antiques and artifacts. I reached toward some wonderful cast-iron kettles on his doorstep and he told me they were from a wagon train. He kept telling us stories about people who wanted to buy stuff and he wouldn’t sell them anything. So, it was hard to determine if any of the stuff was actually for sale. However, he (or someone) had done some kind of “reuse art” with many of the items. This was on the front of one shed:

Are those animal traps hanging from the saw blade? 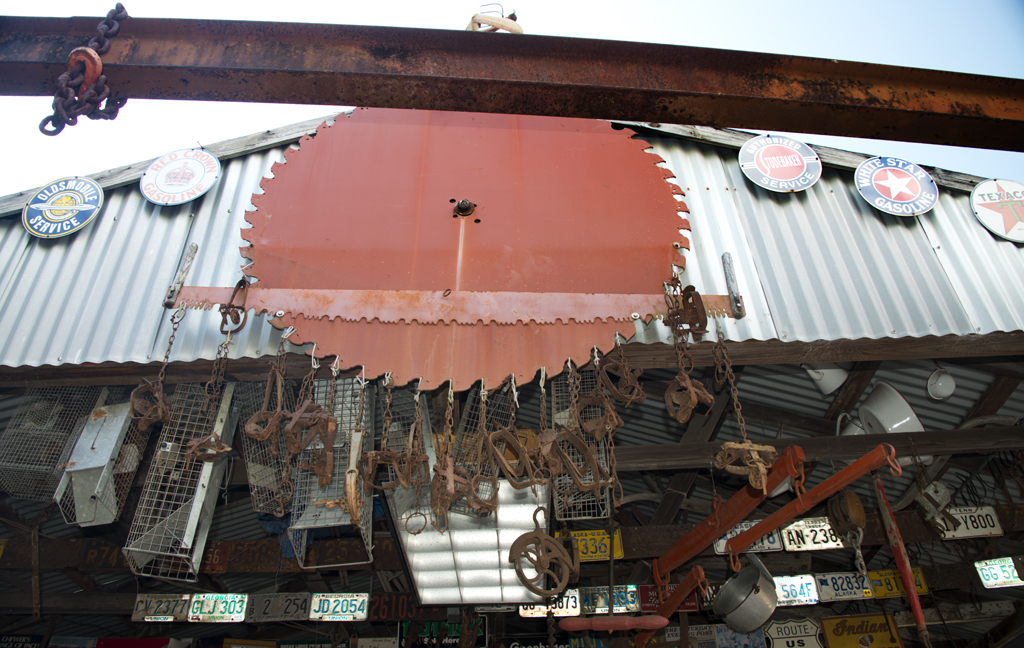 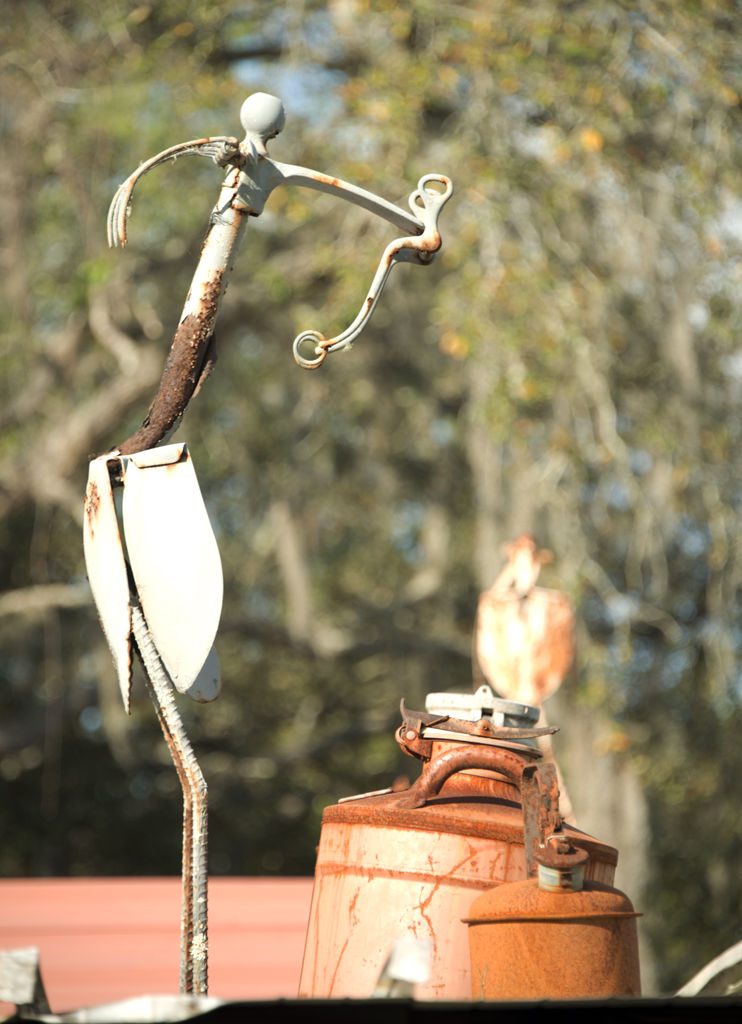 And he showed us a wonderful framed wooden plaque he’d made and mounted old woodworking tools on. He told us he was cleaning up some guy’s farm and was allowed to salvage anything he wanted. He showed us a pile of wooden horse-stall shutters covered with wire he’d just brought over that day. He sold Paula one for three dollars. It’s a good thing I drive a Mini or else I’d have hauled away about half the guy’s inventory! I really wanted those kettles!

Here’s my favorite shot of the day (besides the portrait): 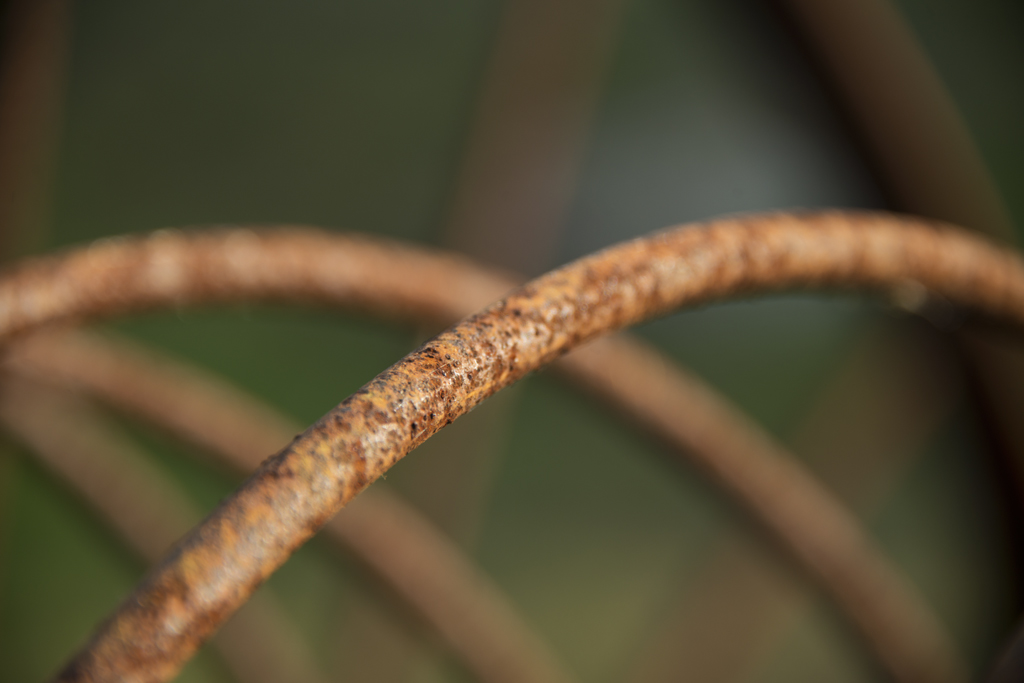 It’s an abstract detail from one of those pull-behind hay fork implements.

I think our host was more than happy to have our company, but I can assure you we were certainly glad for his! He more than made up for the first a**h*** we encountered that day. In fact, when we got in the car to leave, Paula turned to me and said, “I’m so glad that first guy was such a jerk!” Me, too, Paula, me, too. 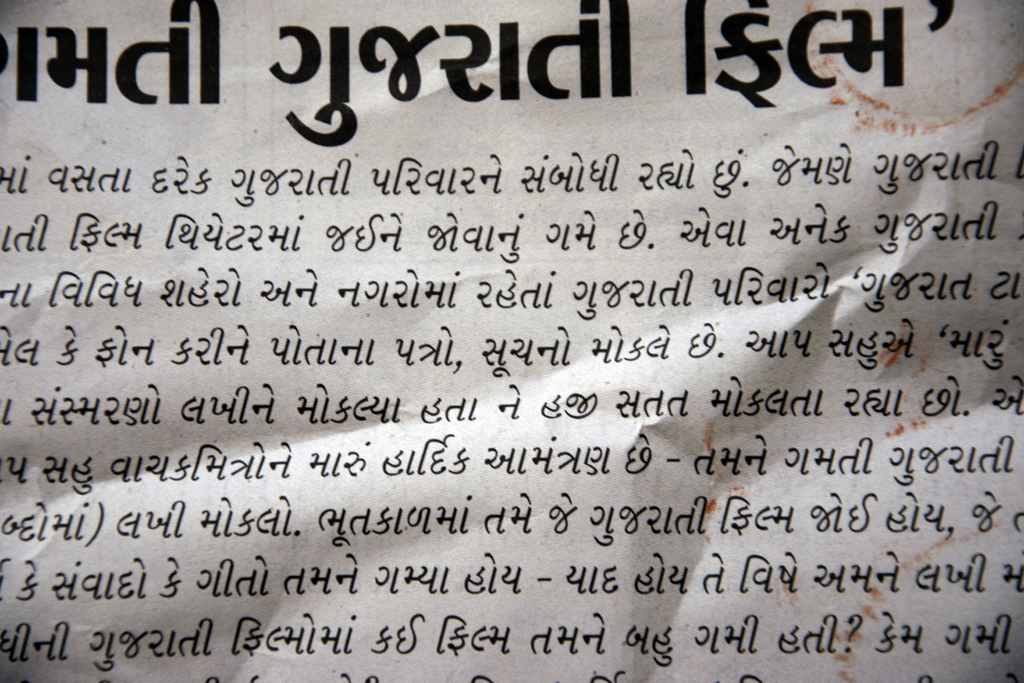