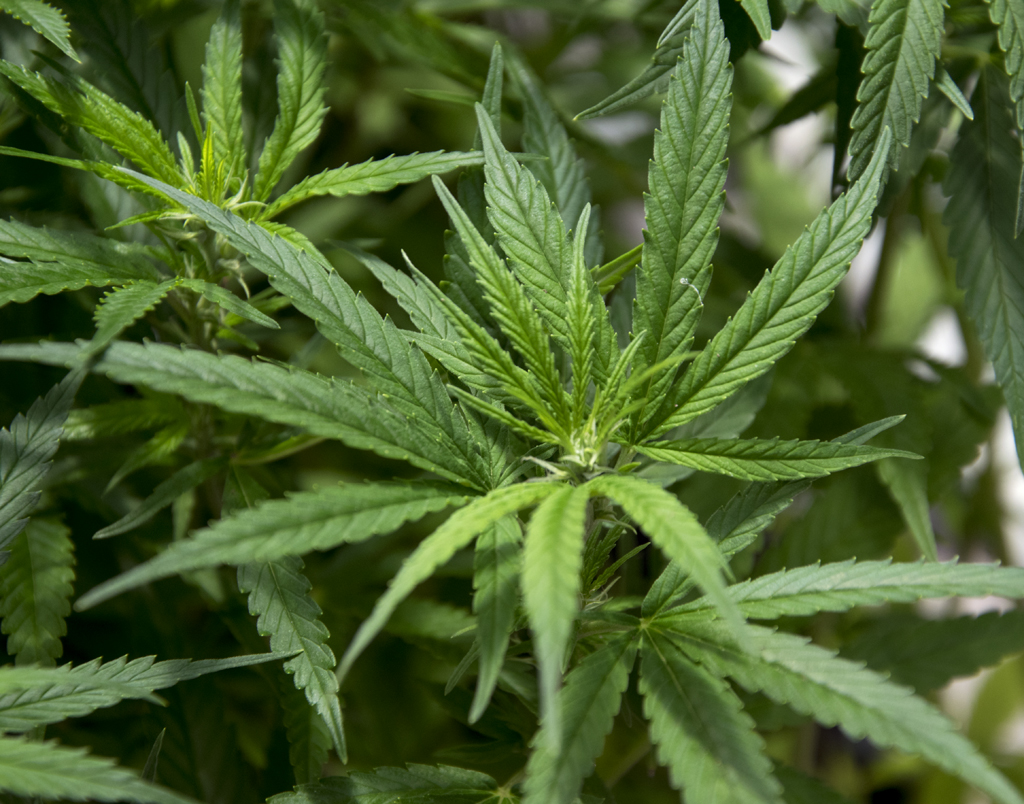 In last week’s post I described a tour I took with Colorado Cannabis Tours in the summer to a cannabis farm. This week I’ll go into more detail about the farm itself.

It’s located in Brighton, Colorado, just northeast of Denver. It’s a rural agricultural area, and I’ve been there several times. In fact, I wrote a post about Lulu’s Farm, which is located there.

From the parking lot it looks like a bunch of greenhouses, which I suppose it is. We entered and were issued visitors’ passes. Then we were led through a warehouse area: 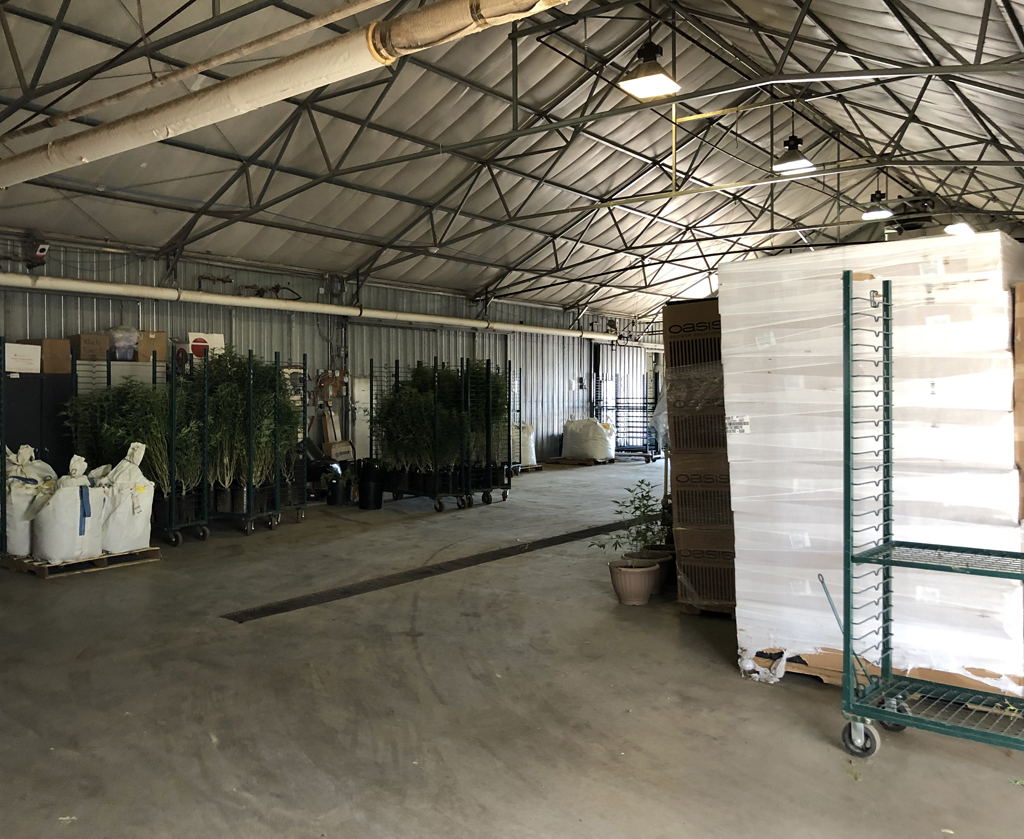 Note those tall plants on the carts: cannabis! Around the corner we could see truck bays that looked out onto the fields:

The next bay over had a truck backed up to it with giant bags of finely ground hemp in it: 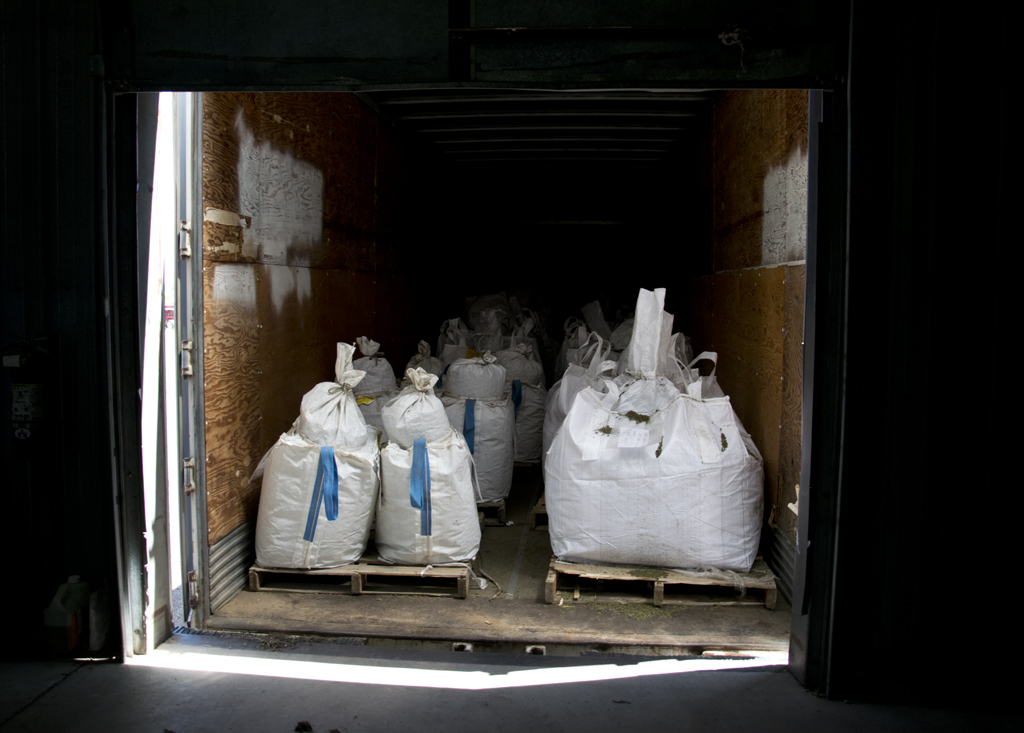 Here’s what was in those bags: 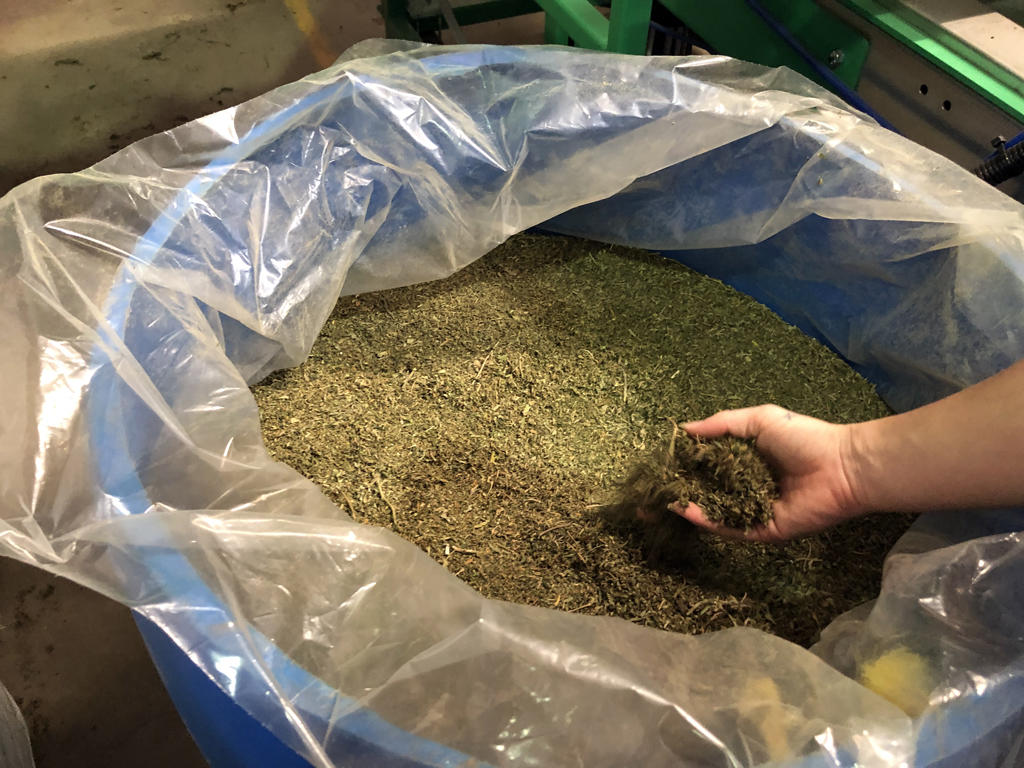 Later in the tour you will see how the ground leaves got in there.

For now, a little education for those who may not know. Plants that produce marijuana, hemp or CBD are all called cannabis. In fact, it’s the same plant no matter what end-product is produced. Marijuana is the substance that contains THC and has a psychotropic effect (you get high from it). Most of the THC in a cannabis plant is concentrated in the bud or flower. The buds/flowers grow at the end of the stems on female cannabis plants.

You can see a very tiny bud in the picture below. If this bud/flower is allowed to grow, it could be harvested and dried. Then you would have marijuana.

Yes, there are female and male plants. All the plants on a farm like this are female. The crops are propagated by trimming the ends of “mother” plants and planting them. Male plants and the seedlings that would come as a result of pollination aren’t desirable because the strains would be unpredictable. Using vegetative propagation from “mothers” ensures consistent quality because all the plants are clones.

Our guide, LaynieGanja, demonstrates below how much of the “mother” plant is trimmed to make a seedling: 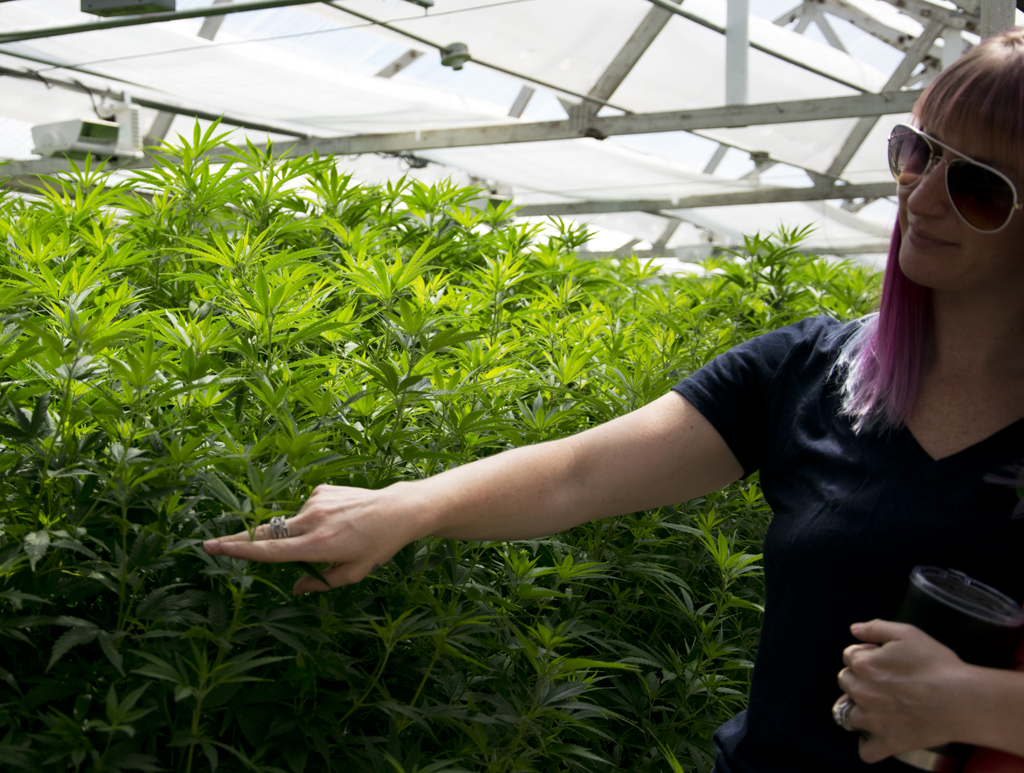 To continue the THC thread, if a cannabis plant is prevented from developing buds, and the THC content is 0.3% or less, the harvested plant–mainly leaves–is called hemp. This is a federal specification. Marijuana (with 0.3% or more THC) is considered federally illegal, but some states have made it legal. Hemp (with 0.3% or less THC) is legal. Hemp is extremely versatile and can be made into tea, mulch, textiles, paper, rope, and many other products, including CBD oil. In addition, using hemp is far better for the environment than trees, cotton or other plants. In fact, Laynie told us that, because cannabis has a stigma attached to it because of marijuana, cannabis plants have been removed from the environment where once they grew natively. This has changed nature quite a bit in some locations.

This farm grows cannabis just for hemp and CBD, not for marijuana. Of course, farms exist to produce that, too, just not this one.

Back to the warehouse and truck bays. Near the bays was a huge machine called the Ellepot: 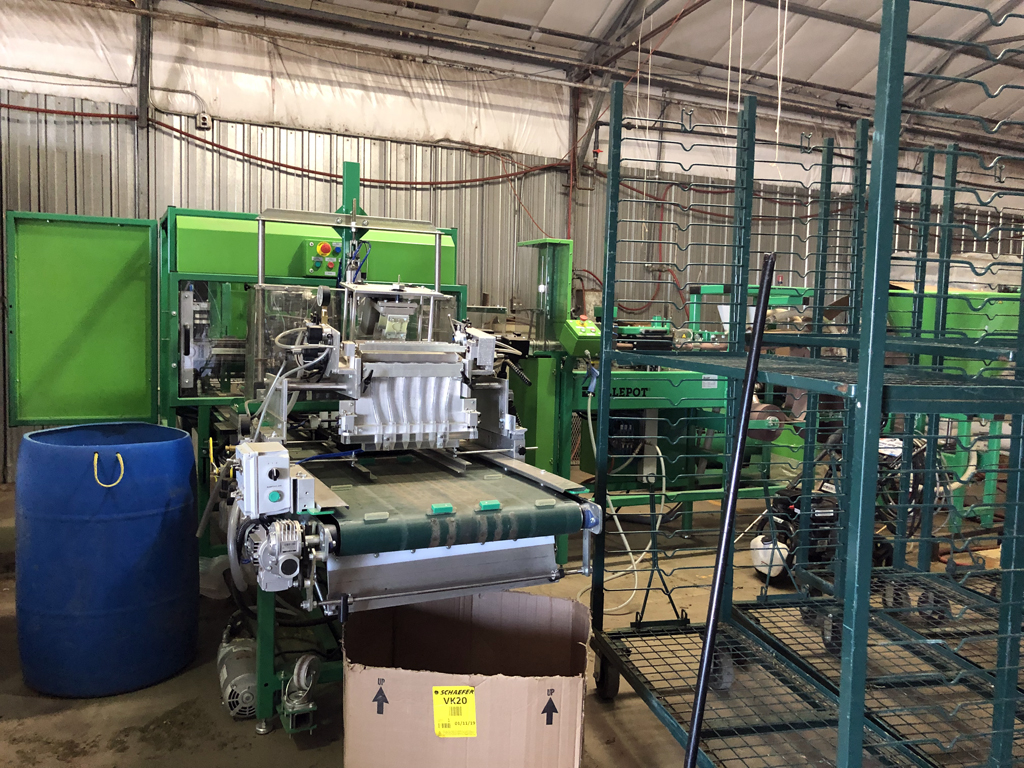 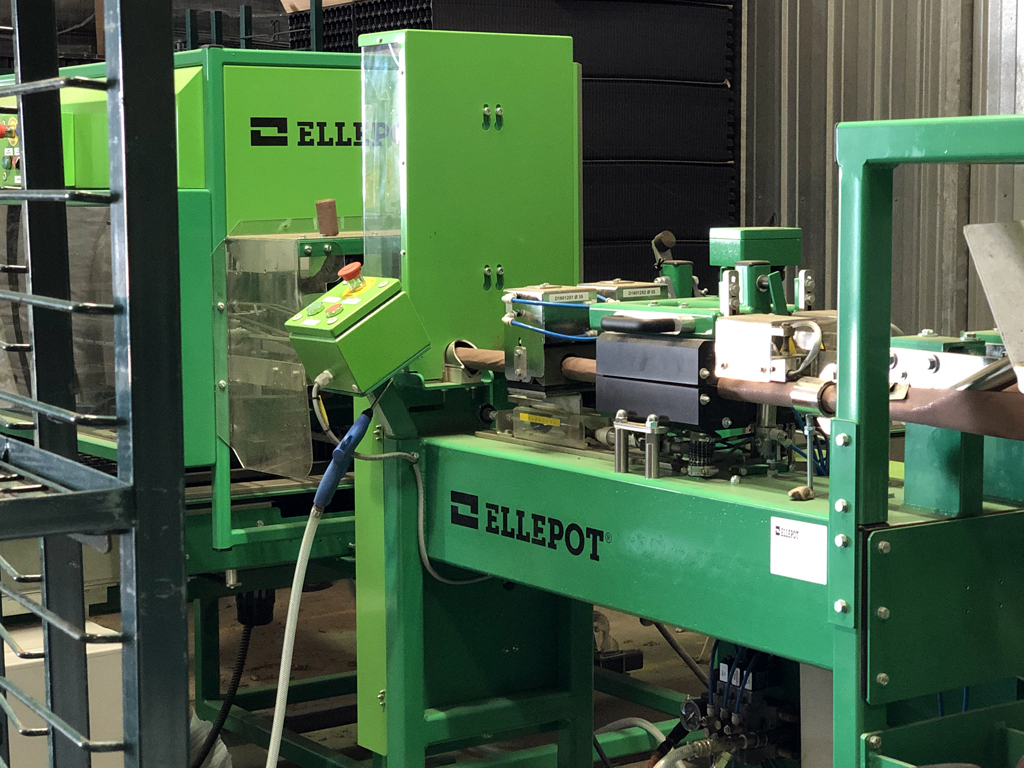 It produces seedling pots out of hemp and other materials like this: 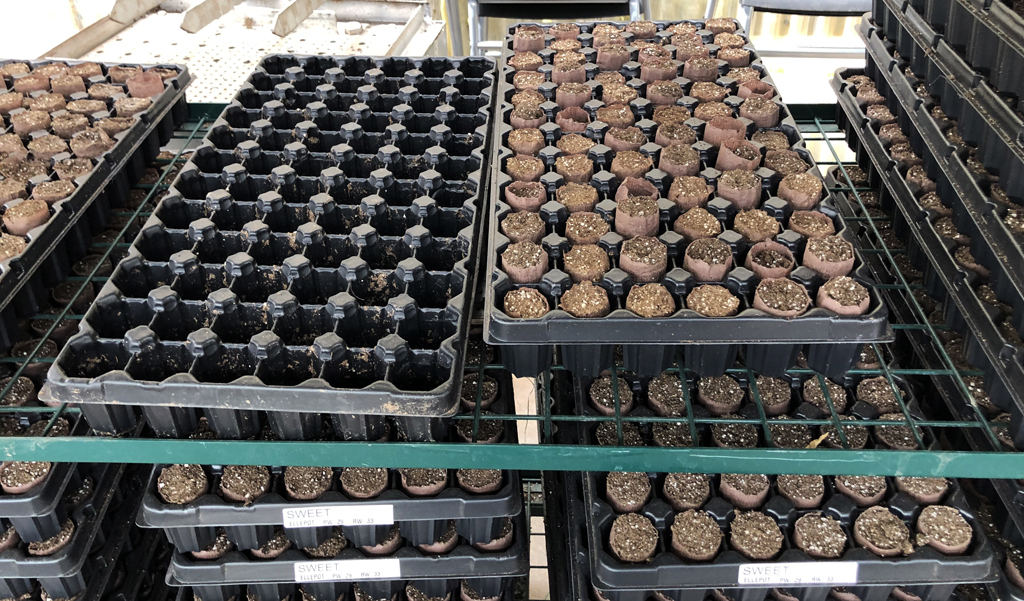 They sell these seedling pots to other farms, as well as using them on this farm.

Next we walked through a seemingly endless series of greenhouse structures, with Laynie giving us a full education along the way. 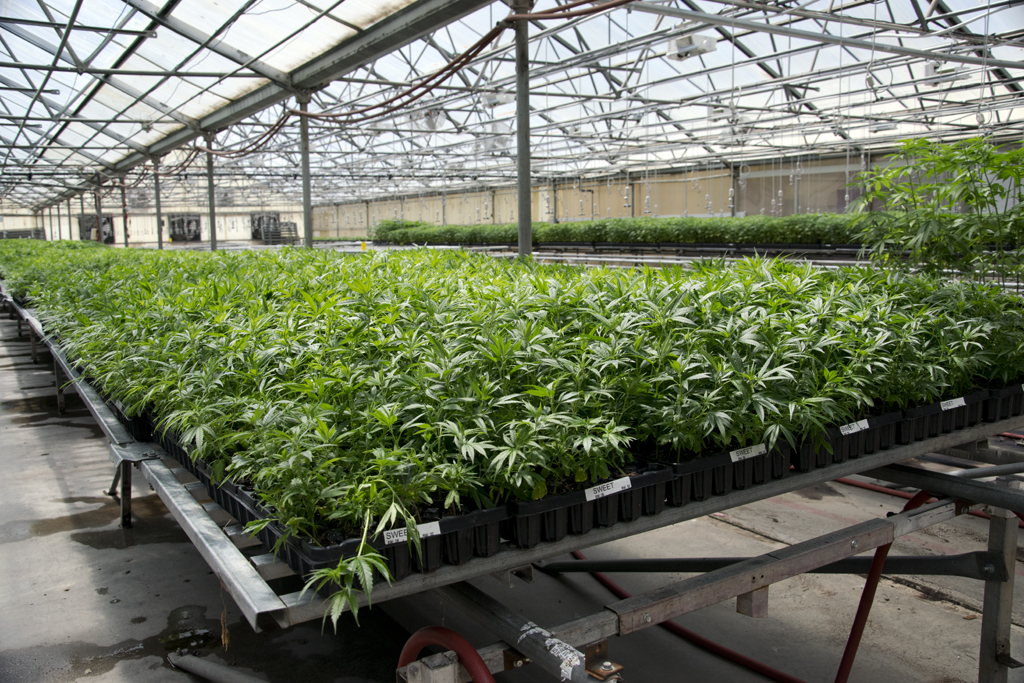 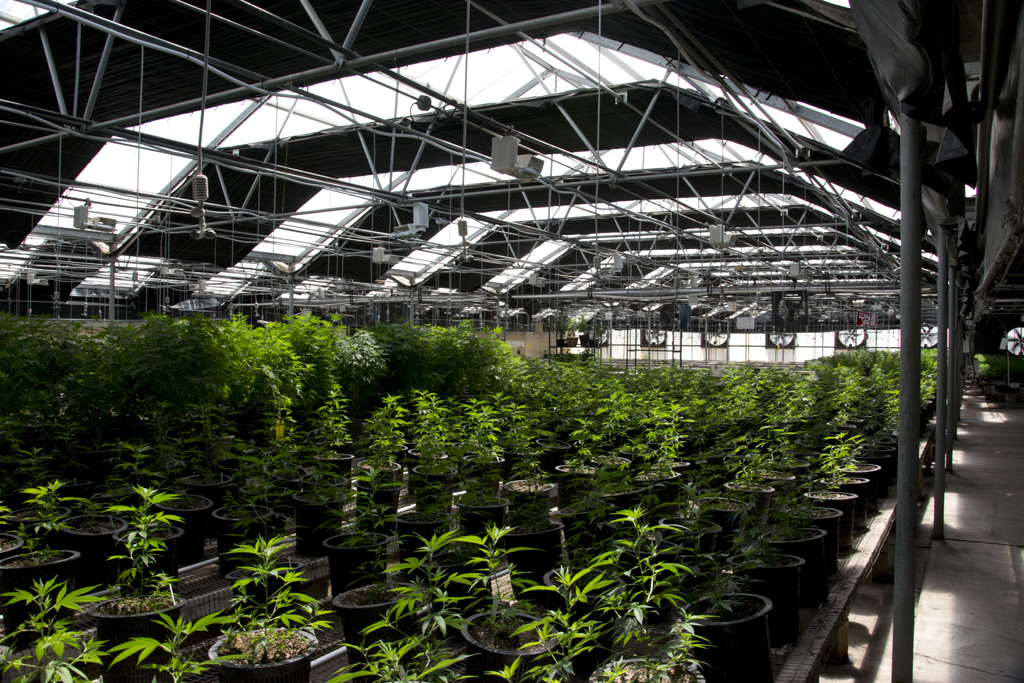 These are the “mothers”: 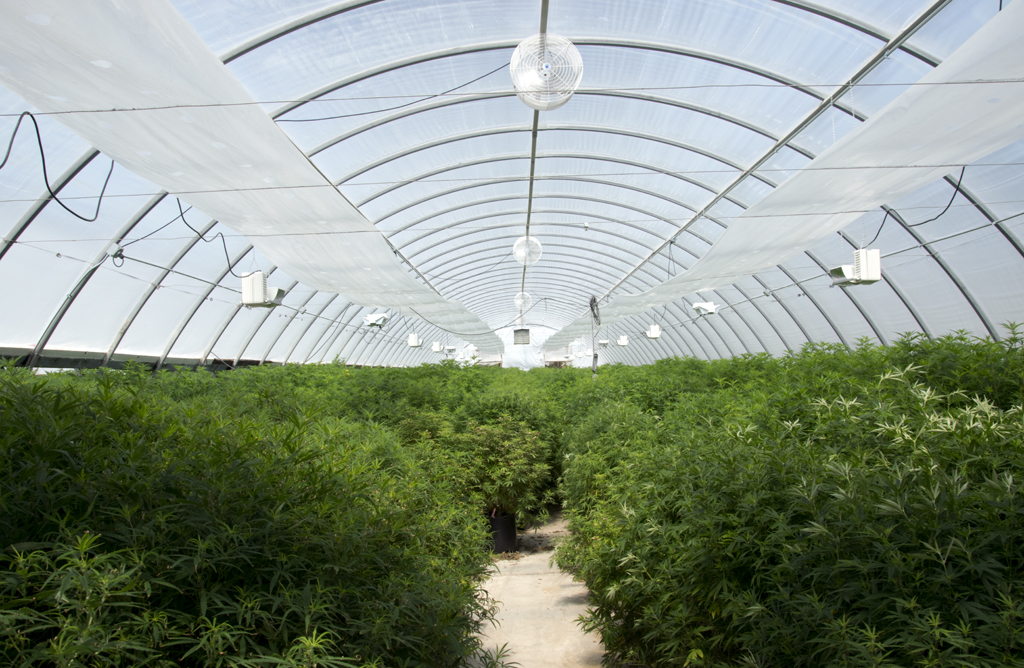 One of my favorite shots of the day: 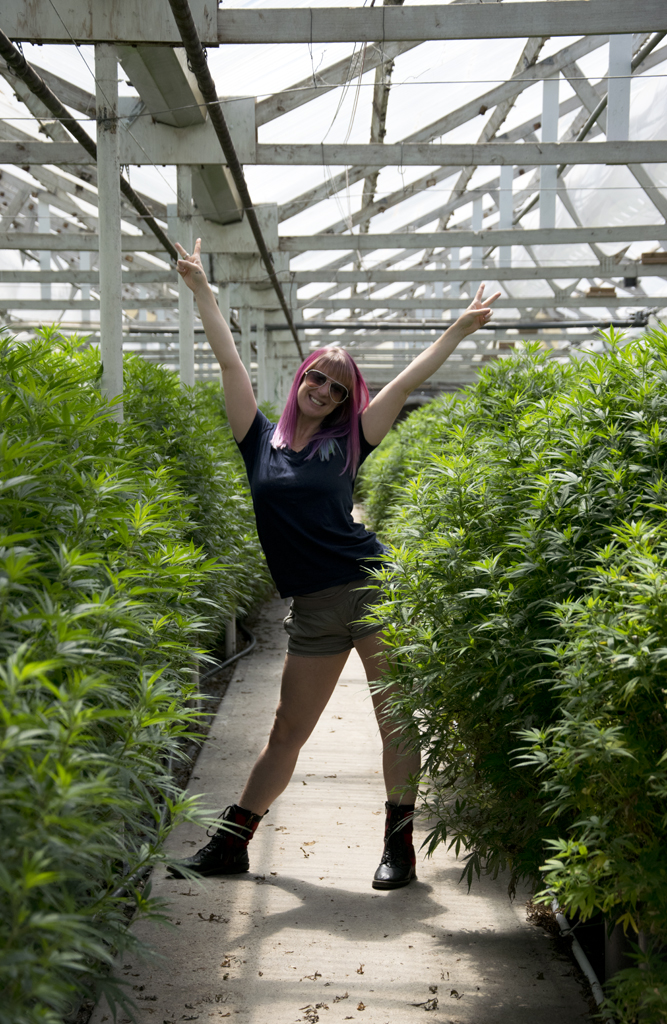 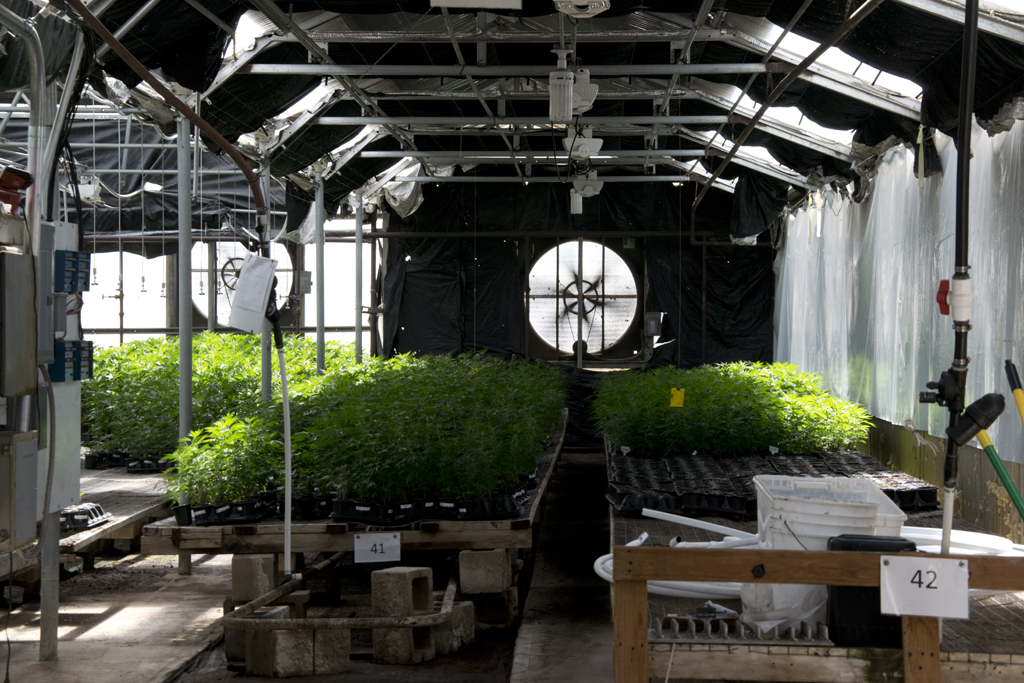 Is anyone else thinking of the opening scene of the movie Pineapple Express?

It was a very hot day that day, but the greenhouses were cooled using a system where water flows over a series of metal fins. Standing next to the wall felt like A/C! 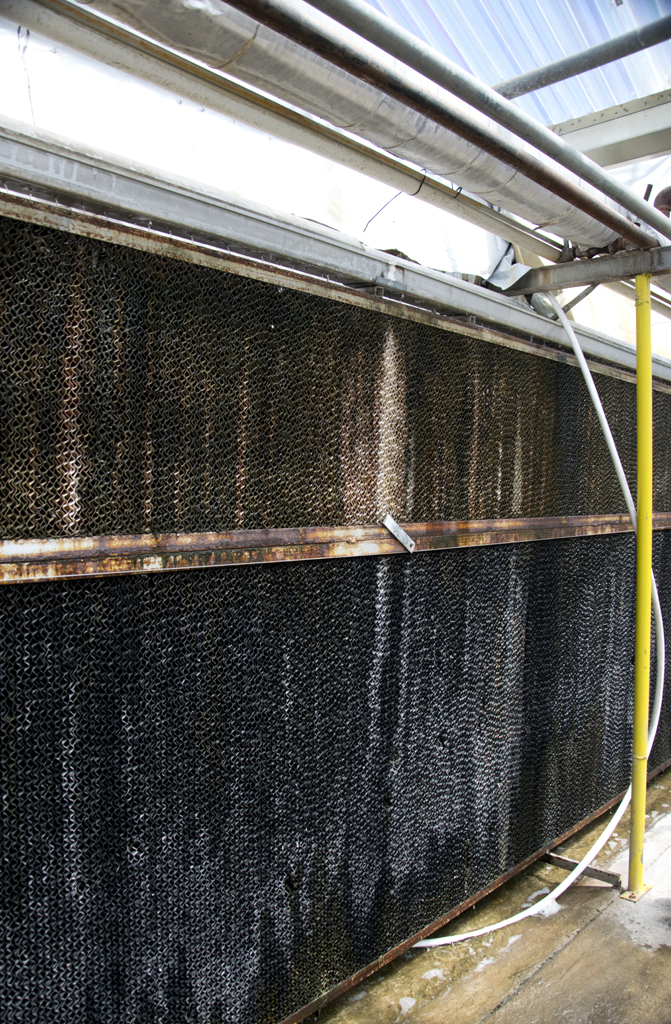 We saw the drying room: 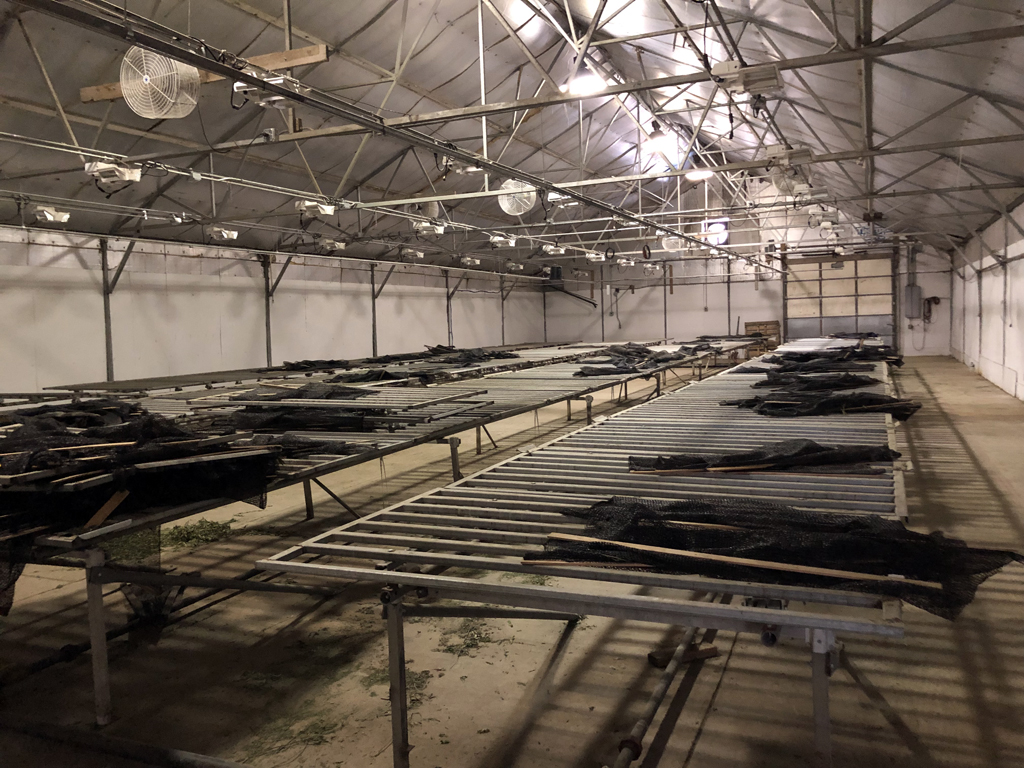 They bring in the harvested cannabis plants and lay them on these screens to dry: 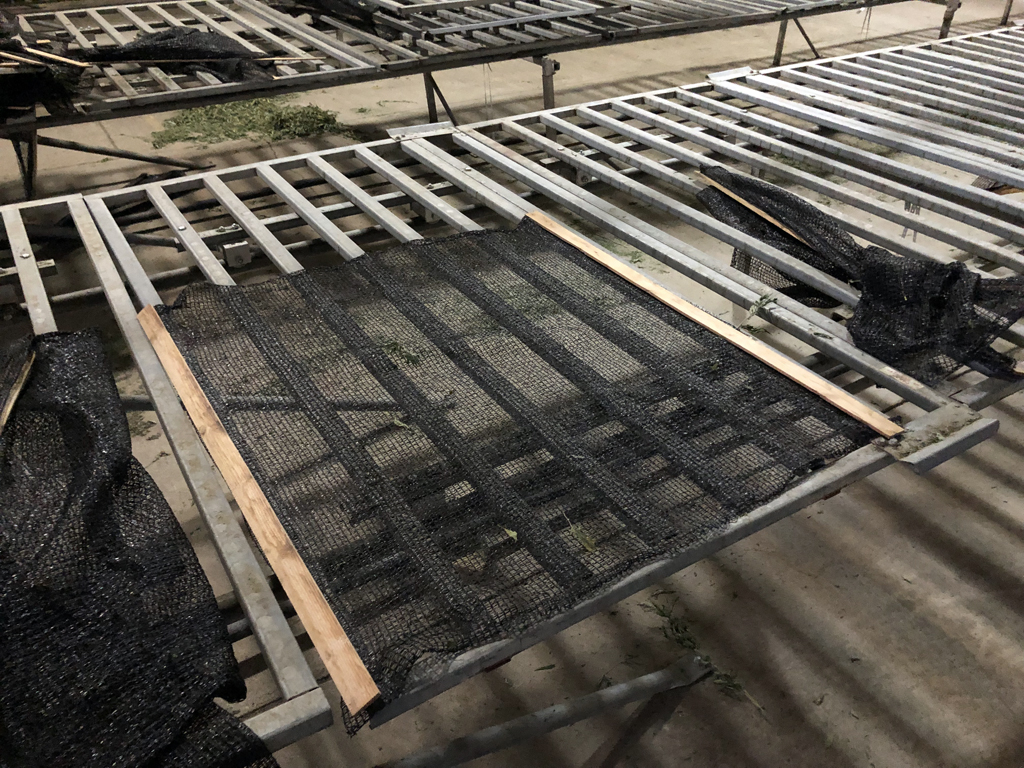 It’s easier to move the plants by picking up the two wooden sides of the screen and folding the branches inside the mesh, kind of like a firewood sling.

Eventually we reached the area of a warehouse where harvested plants are processed. Just outside was a huge machine that strips the leaves off the branches: 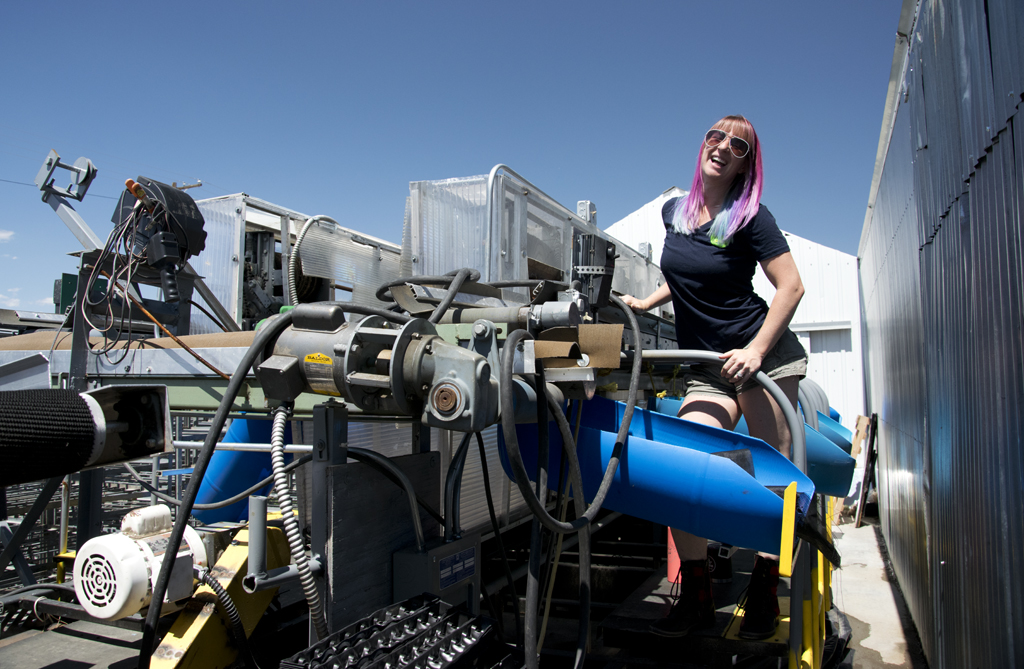 Inside, workers were in the process of grinding the harvested leaves. It was really LOUD! 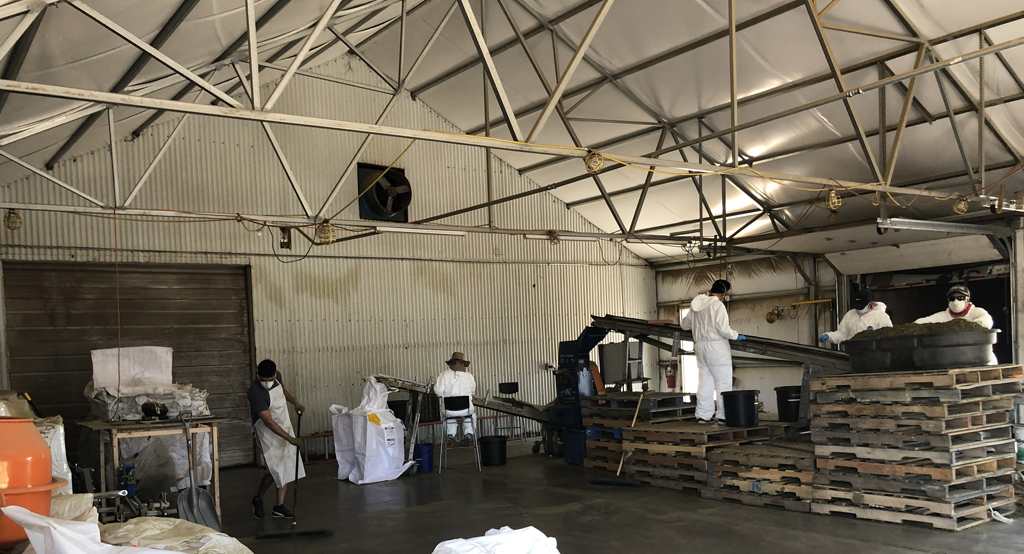 A worker distributes the harvested leaves onto a conveyor belt that takes it through a shredder: 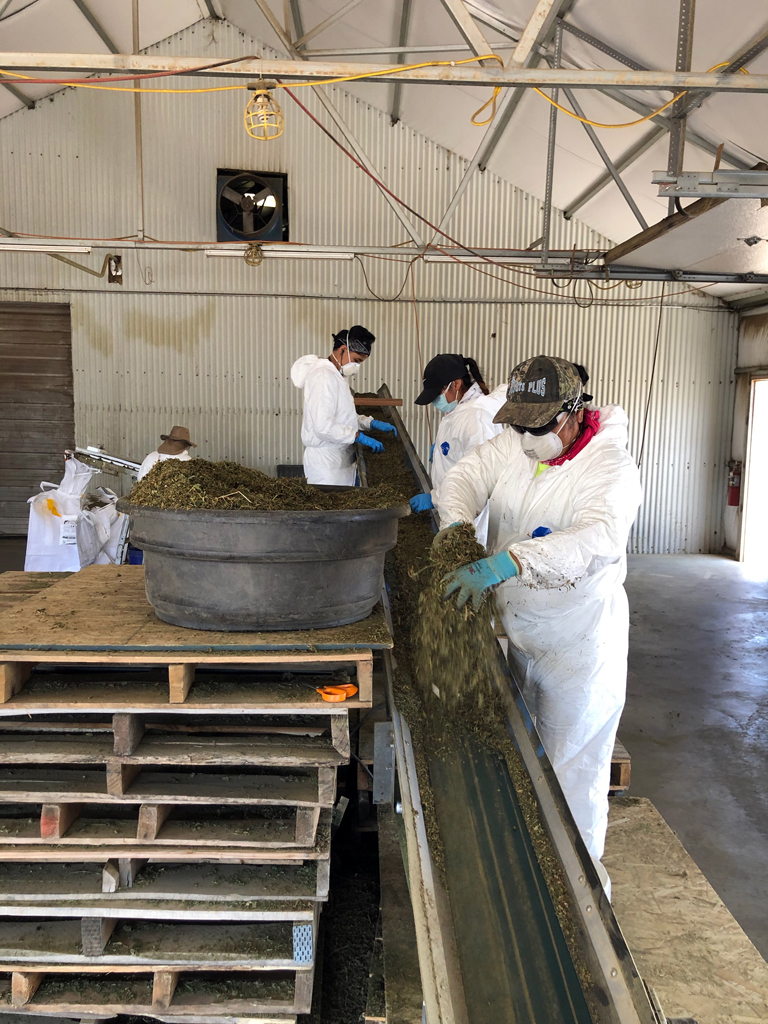 On the other side of the shredder, another worker ensures no large leaves or stems are allowed into the huge white bags: 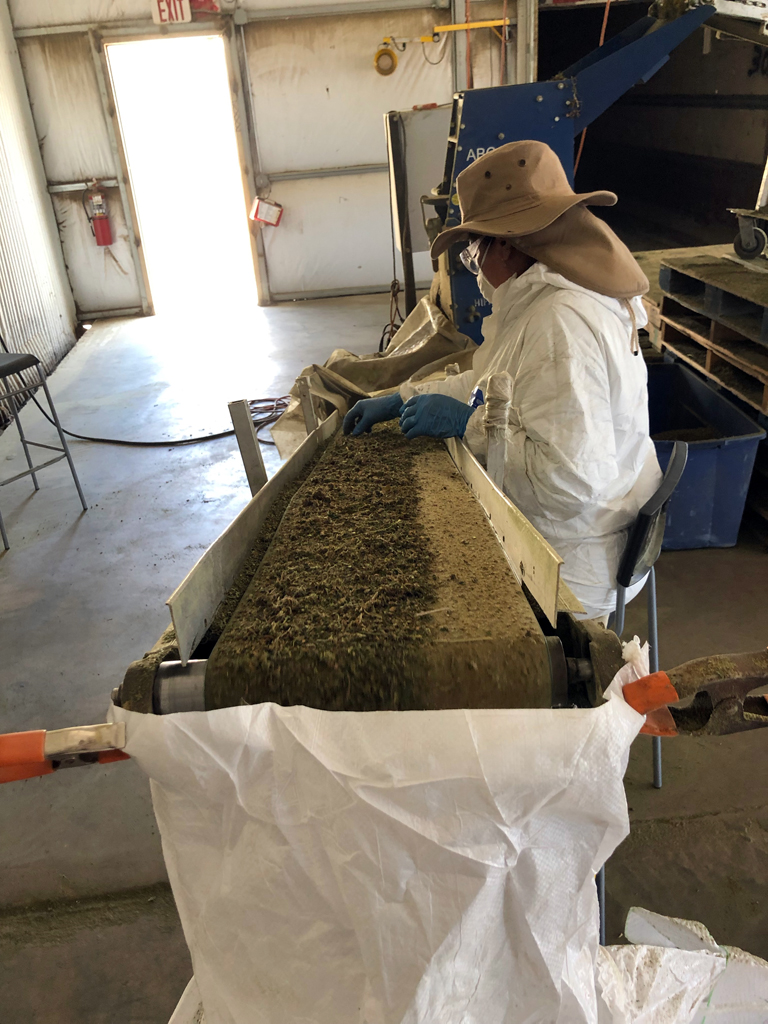 Those bags are then shipped to various places and customers to be made into hemp or CBD products. There is a giant walk-in cooler room where they store some of the processed hemp. If I remember correctly, it has to be kept at a certain temperature to maintain the integrity of the CBD that will get extracted.

At the end of the tour we got to go out into the fields: 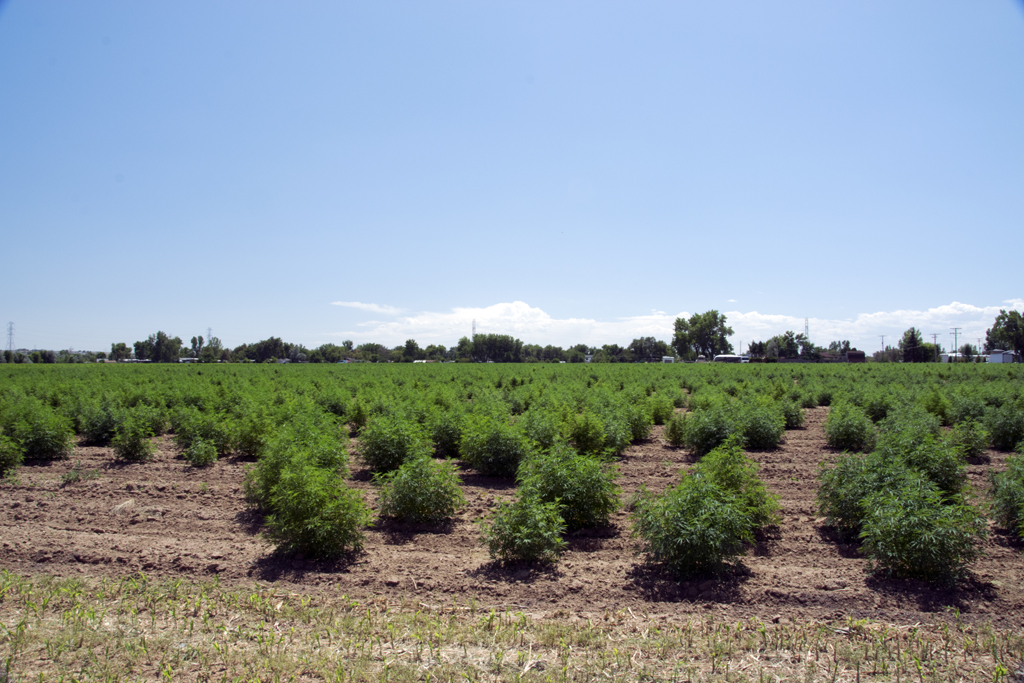 In the foreground, corn is planted so you can’t see the cannabis plants. That is because people who don’t know that these aren’t marijuana plants might come into the field and try to take some.

An interesting thing about the farm is that, before it was a hemp farm, it was a farm that grew houseplants and landscape plants for Home Depot. It morphed into the hemp farm, and the family that grew the plants for Home D moved their operations to a nearby location. They still have partial ownership of the hemp farm, too. BTW, the name of the hemp farm operation is Advanced Extraction, and Laynie’s part of the business is Pure Hemp Botanicals, which sells CBD products like oil, gummies, lip balm, and so forth. Here’s the Colorado permit for the farm: 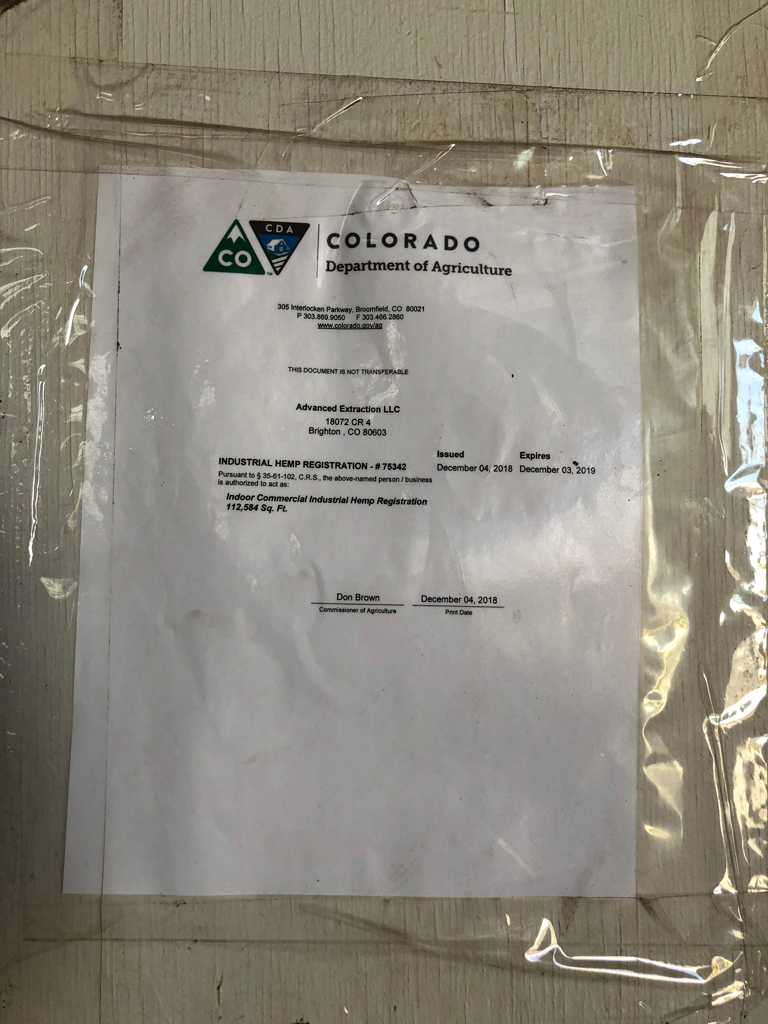 The farm tour was quite extensive, and Laynie really gave us an education about everything. I’m glad to know the info and will be supporting the hemp market by buying hemp paper, textiles and so forth, if I have a choice. It’s far better for the environment.

I hope you enjoyed this trip to a cannabis farm and learned that cannabis actually doesn’t live up to the evil reputation it has had in our culture. 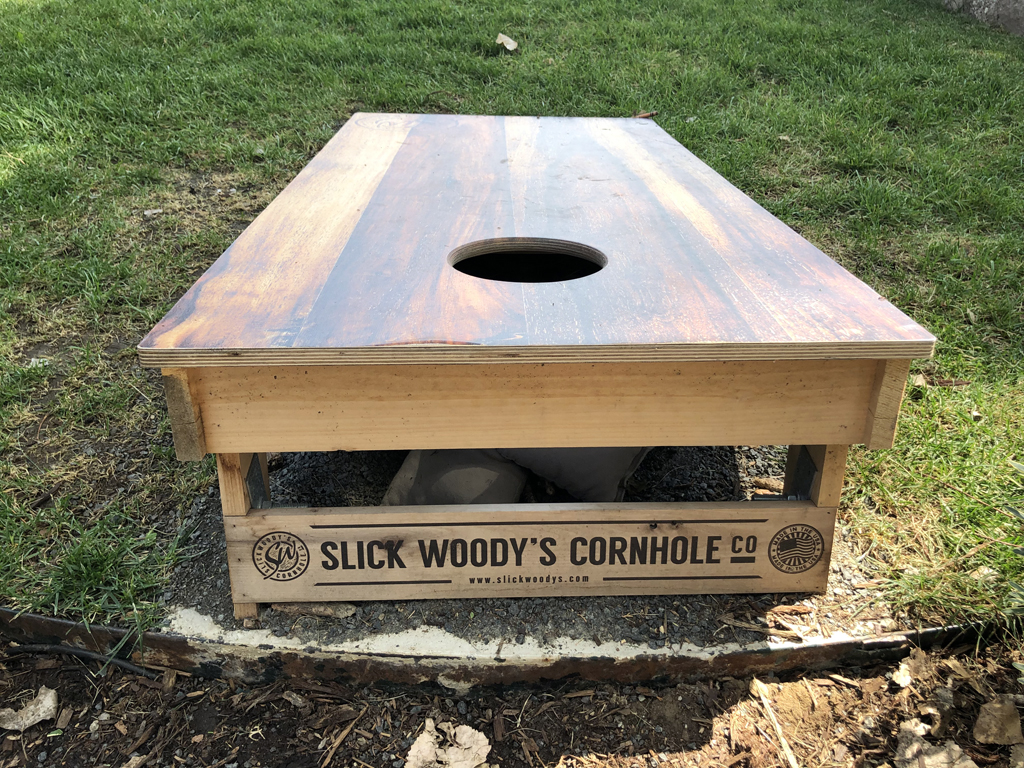